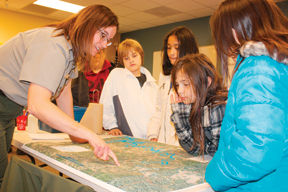 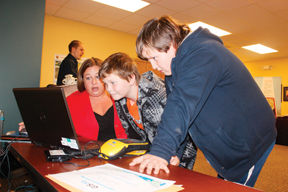 The Taney County Ambulance District hosted an event Wednesday, Nov. 19, at the TCAD training room in Hollister to help area students and the community learn about geographic information systems, or GIS.

The goal of GIS Day is to educate the public on how GIS and mapping is used by various local entities, according to a press release from the city of Branson. The event was open to the public, but groups of fifth-grade students from area schools attended.

“A lot of people think GIS is just maps, but a lot of (GIS) is the data behind it (for government entities, et cetera) to do a lot of analysis,” she said. “It’s used in 911, planning and zoning, roads department uses it, county clerk uses it. All the city departments use it in some aspect or another.”

Participating exhibitors included the cities of Branson and Hollister, Taney County, Stone County 911, the U.S. Army Corps of Engineers, and the Missouri Department of Conservation.

The exhibitors had various learning materials on hand, such as fliers, pamphlets and brochures, and even “The Amazing Mapman” comic.

GIS, according to the release, is “an integrated collection of computer software and data used to view and manage information about geographic places, analyze spatial relationships and model spatial processes.

“A GIS provides a framework for gathering and organizing spatial data and related information so that it can be displayed and analyzed. GIS technology is used in almost all walks of life these days, from GPS navigational systems in vehicles, to Internet mapping applications. GIS technology is used in all types of commercial and government fields, such as military, health care, insurance and real estate.”