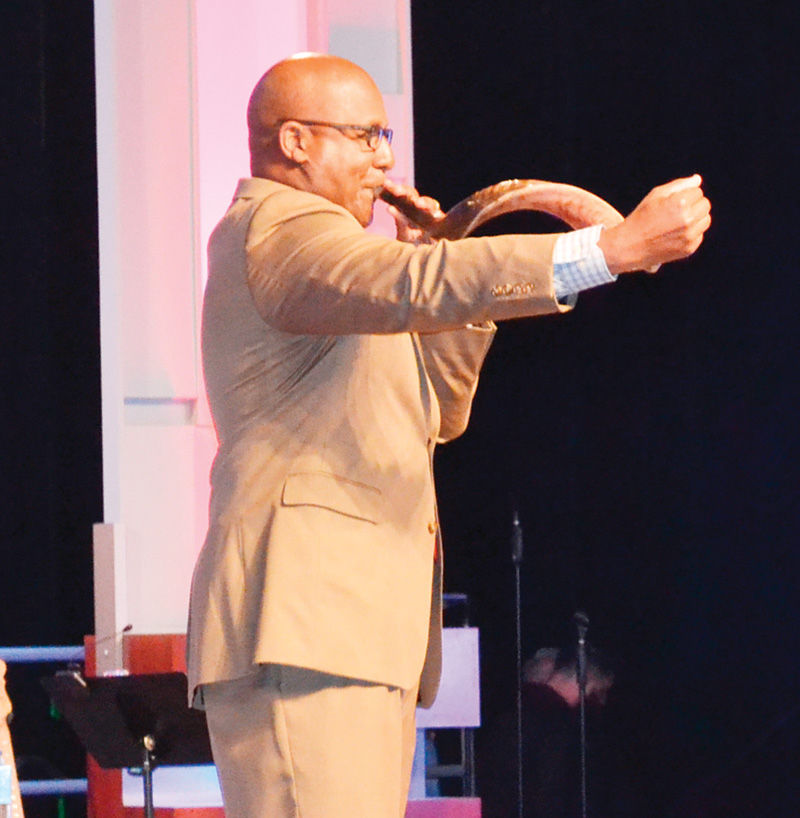 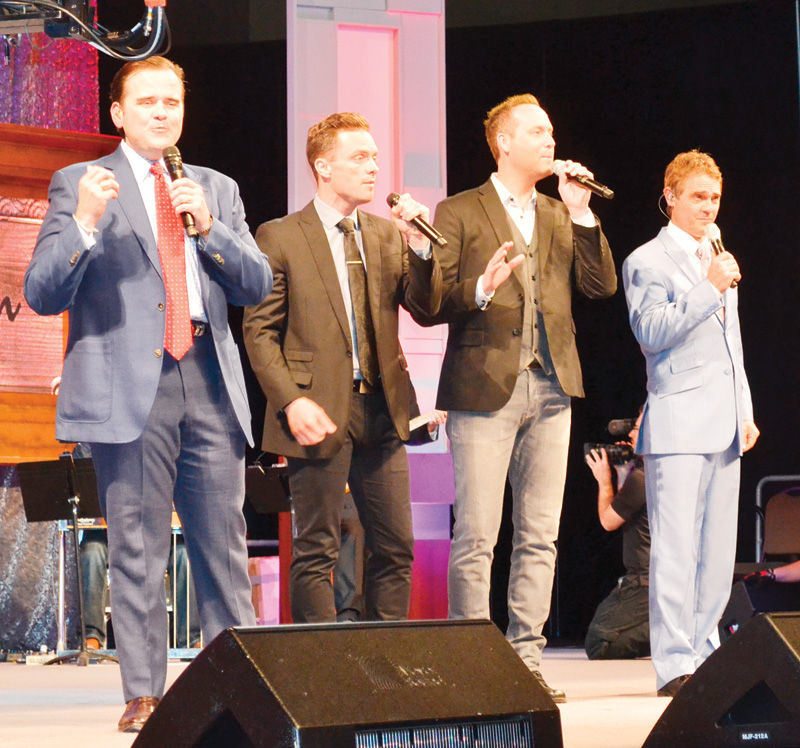 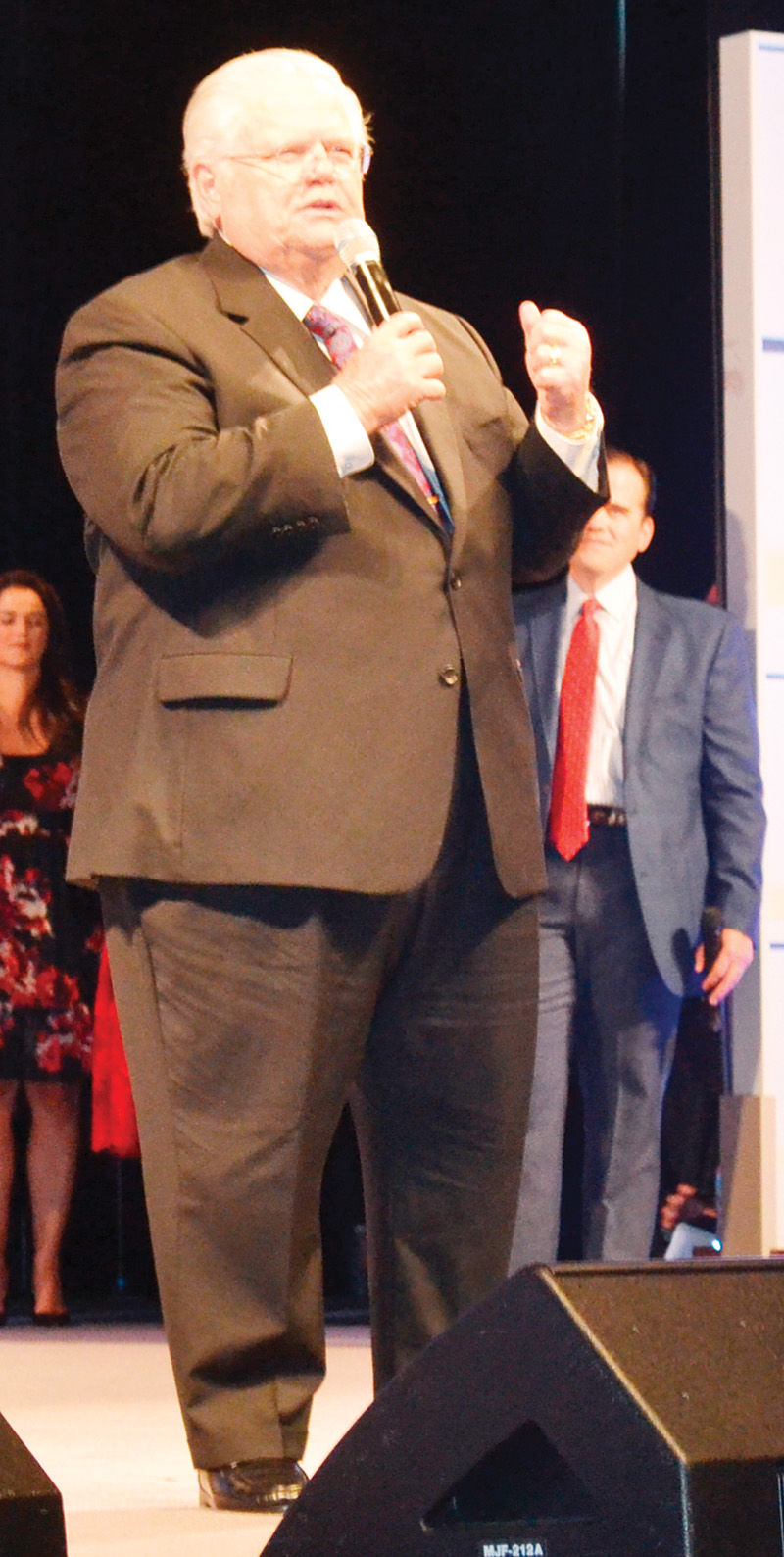 A showcase of fundamental American liberties, including freedom of speech, freedom of religion and the right to peaceably assemble, was celebrated as the Righteous Revolution rocked Branson last week.

John Hagee Ministries, of San Antonio, Texas, hosted its annual Branson event April 31 and May 1 at the Branson Convention Center.

Thursday evening, a packed house responded enthusiastically to Southern Gospel performances by Ivan Parker, the Hagees and Canton Junction, before Pastor Matthew Hagee wrapped up the evening with a message.

The event, billed as a Righteous Revolution Rally, featured the comedy of Dennis Swanberg in the pre-event. Swanberg entertained the crowd with impressions of former presidents Bill Clinton and Ronald Reagan.

“Do not tell Hillary that I’m here,” Swanberg said in a Clinton voice, adding, “Do not email Hillary at this time. Her emails are backed up.”

Laughter exploded across the venue as Swanberg went into his Reagan impersonation.

“Well, ... , yes, it bothered me they always brought up my age,” Swanberg said, mimicking Reagan. “I remember talking to Thomas Jefferson about it. He said it bothered him, too.”

Pastor Lyndon Allen came out with a shofar.

“This instrument is the sound of the kingdom of heaven,” Allen said.

“You were designed to respond to this instrument,” Allen said, as he described Christians United for Israel, a pro-Israel organization founded by John Hagee, in which he serves as regional coordinator.

When Allen blew the shofar, people responded. Shouting echoed among the audience, and the venue didn’t grow quiet during the evening, although Parker toned things down a bit with a sequence of calming, soothing Southern Gospel performances, including God’s In The Middle Of It from his new CD, Threads of Mercy.

A display of patriotism was interwoven throughout Thursday’s event. Parker closed his segment with the Lee Greenwood standard, “God Bless The USA.”

“I thank God that we live in a country today that we are still living in freedom,” Parker said. “I’m excited about what God is doing.”

The Hagees, comprised of John Hagee and his children, Matthew Hagee, Tina Ketterling and Sandy Parker, opened their set with a revival.

The family performed a rendition of the gospel standard, “God Is God.”

John Hagee then bowed out, saying, “Thank you for welcoming my children to Branson. I still croak along, but they can really sing.”

“Claire was adopted as a young child,” Matthew Hagee said. “She grew up in the loving arms of two parents.”

Her birth mother had an abortion, but weeks later symptoms of her still being pregnant appeared. She went back to the abortion doctor.

The story motivated Claire, who now promotes Sanctuary of Hope, a project of John Hagee Ministries to provide housing for unwed mothers and their unborn children.

“That made me value and appreciate my parents that adopted me,” Claire said. “I didn’t realize, life is a gift; I thought that was a given.”

Claire said saving one life is so important.

“I have a 3-year-old daughter,” Claire said. “I look at her and say, wow, you wouldn’t be here if I had been aborted.”

Matthew Hagee said his dad was just kidding when he said he still croaks along.

“How many would like to hear him sing again?” Matthew Hagee asked, drawing an exuberant response.

John Hagee returned during the offering to sing a solo, “My God Is Real,” demonstrating he can do more than just croak along.

The Cornerstone Sanctuary Choir performed the anthem for each branch of the United States military. Veterans stood and were recognized as their anthems played.

Canton Junction, comprised of Matthew Hagee, Tim Duncan, Casey Rivers and Ryan Seaton, then took the stage delivering their award-winning, four-part harmony on songs such as, “The King And I,” and “Every Hallelujah.”

Matthew Hagee’s message was about rebuilding the altars.

“The crisis in this generation is a crisis of our foundations,” Matthew Hagee said. “It’s time the righteous made a decision to rebuild.”

“From Plymouth Rock to the 60s, we built a foundation ... and it’s time to return,” Matthew Hagee said.

He closed with a prayer, “Father, I’m asking, don’t let this be a moment, let it be a movement.”