Legacy Youth Institute celebrated 31 participants during the 2016 graduation banquet held April 7 at the Best Western Inn of Branson West. A photo of the late Diane Barber, wife of keynote speaker Jim Barber, is displayed at the left. 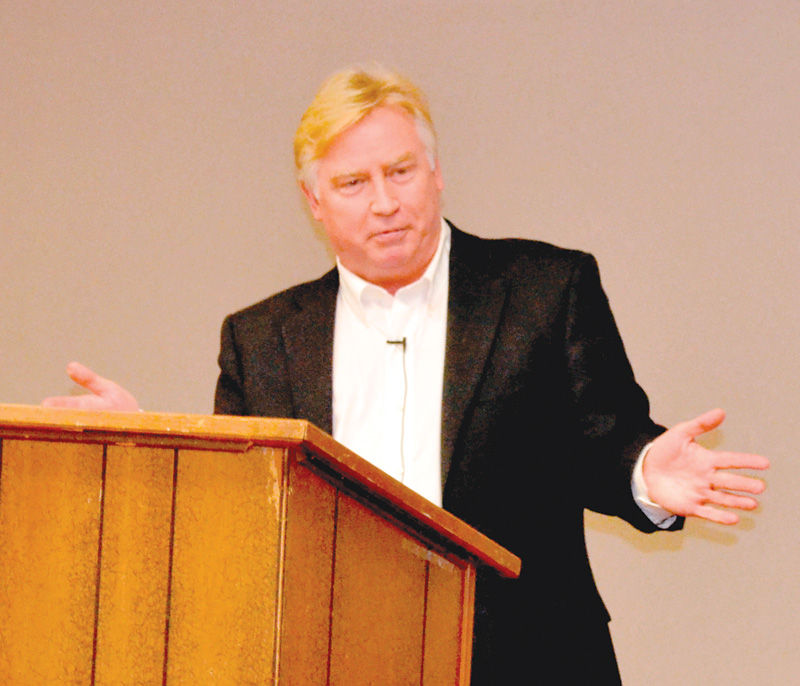 Long-time Branson entertainer Jim Barber told his life story as the keynote speaker during the Legacy Youth Institute graduation banquet April 7. Barber fought back tears at times, as he recalled memories of his wife, Diane, who passed Aug. 15 at age 53, three months after being diagnosed with pancreatic cancer. 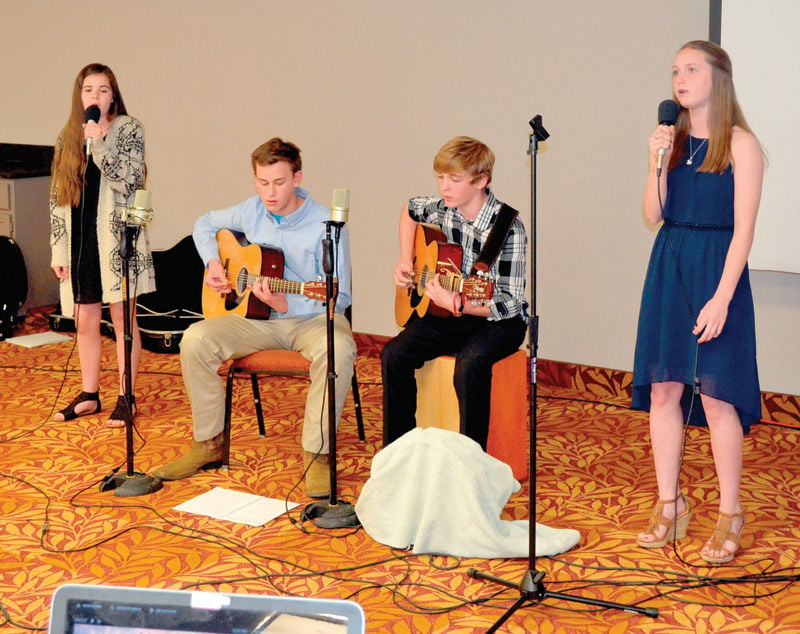 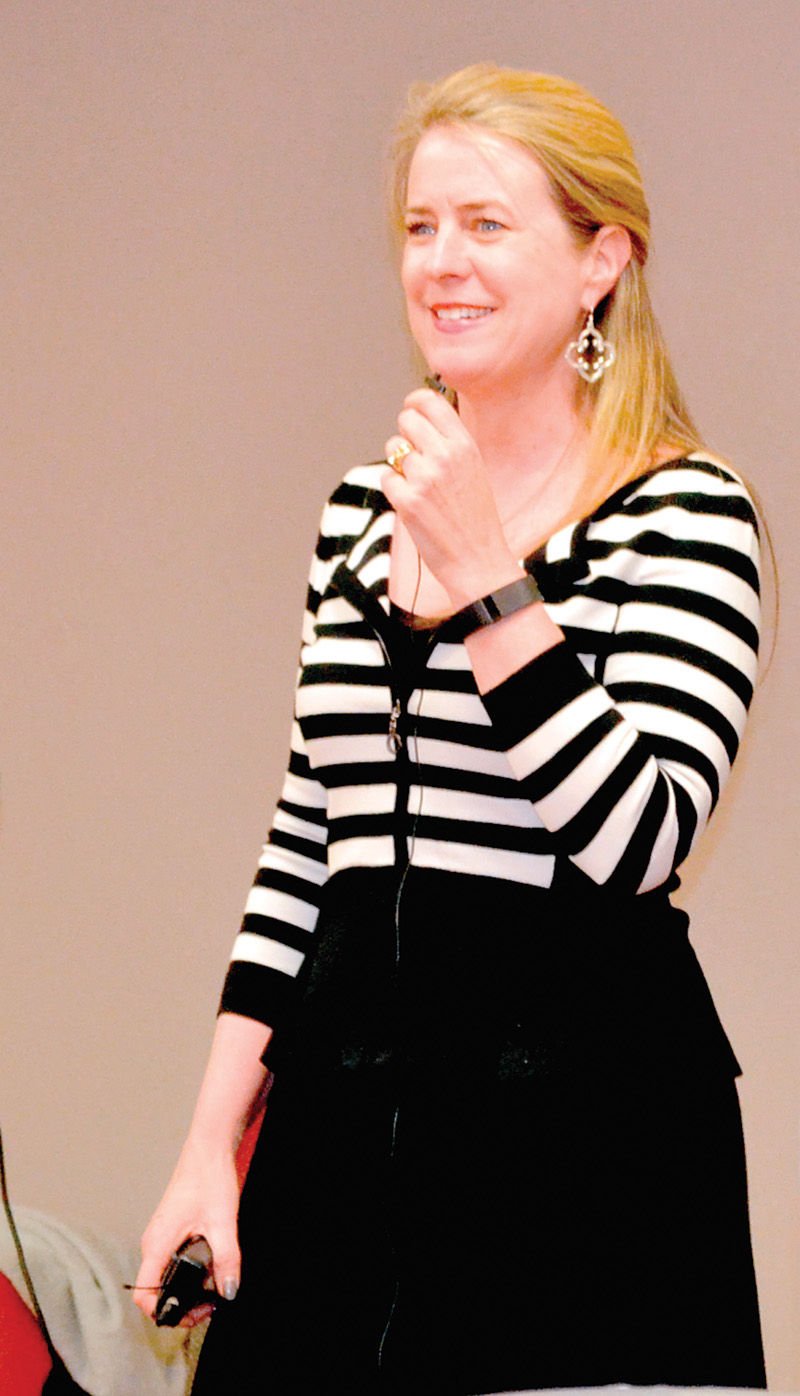 Sue Head, Dean of Character Education, at the College of the Ozarks, speaks during an April 7 Legacy Youth Institute graduation banquet held at the Best Western Inn of Branson West.

Legacy Youth Institute celebrated 31 participants during the 2016 graduation banquet held April 7 at the Best Western Inn of Branson West. A photo of the late Diane Barber, wife of keynote speaker Jim Barber, is displayed at the left.

Long-time Branson entertainer Jim Barber told his life story as the keynote speaker during the Legacy Youth Institute graduation banquet April 7. Barber fought back tears at times, as he recalled memories of his wife, Diane, who passed Aug. 15 at age 53, three months after being diagnosed with pancreatic cancer.

Sue Head, Dean of Character Education, at the College of the Ozarks, speaks during an April 7 Legacy Youth Institute graduation banquet held at the Best Western Inn of Branson West.

One of Branson’s long-time entertainers took center stage last week, fighting back tears at times, to tell his life story to a group of teens.

Barber balanced his speech with wit and transparency in speaking publicly seven months after the death of his wife Diane. She died Aug. 14 at age 53 after being diagnosed three months earlier with Stage IV pancreatic cancer.

Those in attendance wouldn’t have known that by the manner in which Barber began his presentation.

Barber started performing and doing puppets when he was 9.

“That’s why I was so relieved when I heard (College of the Ozarks Dean of Character Education) Dr. Sue Head say, ‘It’s OK if you don’t know what you want to do when you grow up.’”

Earlier in the program, Head talked about the College’s involvement with area high school students in the Legacy Youth Institute program.

“We want them to know that the path that they think is straight is really quite curvy, and that’s OK,” Head said. “We wanted to reduce some of their anxiety. It’s OK to not know right now what you’re going to do with the rest of your life.”

Barber said he could relate.

“I still don’t know what I’m going to do with the rest of my life,” Barber said.

Barber grew up in the Black Hills in Rapid City, South Dakota. As a 12-year old, he was supposed to be lighting a lantern while camping, but his creativity got him into danger.

He had just bought his first album, Johnny Cash’s “Ring of Fire,” and decided to pour the kerosene in a circular ring pattern.

Barber found himself on fire.

“I had kerosene burning up my chest all the way to my head,” Barber said. “I looked down, my skin had all peeled up like a fried chicken.”

Barber spent two weeks in intensive care. He heard other children in the unit down the hall crying, but didn’t feel any pain. He had burned his nerve endings.

“My head swelled up like a basketball,” Barber said. “They wouldn’t let me look in a mirror.”

Barber said he cried out for divine assistance, “God, if you’ll let me live through this, I want to make people happy.”

The Barbers married Sept. 7, 1985 in Rapid City. Diane attended the University of Kansas in Lawrence, while Barber studied civil engineering at the South Dakota School of Mines and Technology.

“Every weekend I drove down to see her,” Barber said. “Somebody said you got to go down to this little town south of Kansas City called Branson.”

When they arrived, Branson had only five or six theaters. All were sold out except one, which had two seats available. The couple took in their first Branson show.

When they left, Barber said, “That’s a nice town, but it’s too small for me.”

He laughs in retrospect, “What I should have said was ‘I am going to start buying land there right now.’”

Blessed with a daughter

Barber recalled he was burned out from being on the road as a performer and away from Diane, when Glen Campbell called and wanted to bring him to Branson.

He began performing at Branson and the couple moved to the entertainment capital in 1999.

They had lost two daughters to miscarriages, but Barber said, “Something about the water here in Branson, we had our daughter Jessica. She is now 14.”

“When Jessica was born and she was starting to talk, she said, ‘Mom, where are my sisters?’” Barber said. “We never told her (about the miscarriages).”

Barber’s career led him to become part-owner of the Hamner-Barber Theater, where he also performed, from 2004-13.

Barber won International Ventriloquist of the Year and Comedy Entertainer of the Year for his technical vocal skills and creative approach.

In 2013, when he left the theater, Barber began working cruise ships and was away from Diane for weeks.

“We were like ships passing in the night again,” Barber said. “I said that’s not what we moved to Branson for. I saw some miserable people who worked on cruise ships. I saw some happy people, but they were all single. They didn’t have families.”

Barber told his agent he wasn’t taking any more bookings and came home. Soon after, Diane got sick and was initially diagnosed with lymphoma.

Three days later they found out she had late-stage pancreatic cancer and lymphoma.

“She had no symptoms,” Barber said.

“Three months, it was very, very quick and unexpected,” Barber said. “That’s when I realize none of us can take our lives for granted. We had everything we wanted.”

In a moment of reflection at the end of his speech, Barber offered advice for Legacy Youth.

Barber said there are times a person needs to say ‘yes,’ and times when they need to say ‘no.’

“Life is about enjoying life,” Barber said. “Do good things and our entire community will be blessed.”

When Barber finished speaking, Jory Rolf, Legacy Youth Institute founder, said the community should reach out to the Barbers.

“As you told us the story of when you told God you wanted to help people smile,” Rolf said. “I think now it’s our turn as a community to help you smile again.”