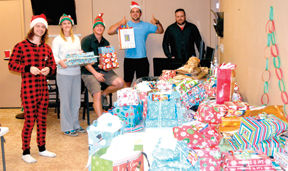 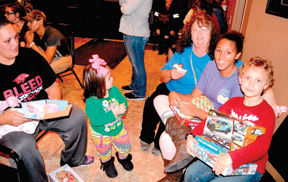 Becky Lewis; Tinsley Lewis, 2; Lesa Adkins; Maci Adkins, 12; and Zeb Adkins, 7; enjoy a Christmas celebration hosted by Jesus Was Homeless. The family is from Yellville, Arkansas, and each of the children received an age-appropriate Christmas gift from Santa Claus.

Becky Lewis; Tinsley Lewis, 2; Lesa Adkins; Maci Adkins, 12; and Zeb Adkins, 7; enjoy a Christmas celebration hosted by Jesus Was Homeless. The family is from Yellville, Arkansas, and each of the children received an age-appropriate Christmas gift from Santa Claus.

When one steps through the door of Jesus Was Homeless headquarters located on Country 76 in Branson, two things happen.

A person enters the world of the homeless. This is an unfamiliar experience for many Americans who have never known poverty. The perspectives and societal functions aren’t what they are accustomed to in having regular income and a permanent dwelling.

While trying to adapt and comprehend the behavior of a segment of society they don’t encounter on a daily basis, the visitor seems to be presented with an atmosphere of unconditional love.

The Dec. 16 Christmas event was geared toward families and children, but others were not turned away.

A man seated near the door was intent on watching a Christmas movie. He didn’t reveal details of his personal situation but was obviously enjoying getting indoors out of the cold and the entertainment value. The man was unaccompanied.

In addition to offering comfort to those who have little, Jesus Was Homeless founder Bryan Stallings also seeks to embracing those who volunteer.

Chicago native Jake Dawson-Whitfield just moved to Branson and was clearly having a good time. He was wearing a smile wider than the Mississippi River while helping pass out presents.

Nathan Madden came decked out for the pajama party. Madden travels with a band, and is out of town frequently. However. he seeks opportunity to lend himself, especially during the colder months when fewer people volunteer for work that may take them outdoors.

“For my particular age group in Branson, it’s frustrating,” Madden said. “Once you’re out of college, it seems your only social setting is bars and parties.”

Madden was looking for an alternative and relishes serving others. He says a lot of people don’t have a lot of money and think they can’t do much, but there are other ways to help.

He said he wants his life to be more fruitful.

“For socialization, it’s bars and partying,” Madden said. “There’s not a whole lot of giving back.”

In recent years, Madden has been through a gamut of emotions. His brother and best friend was deployed to Afghanistan on active military duty. The unit sustained heavy casualties.

“Most of them were killed,” Madden said, noting his brother came through OK, but is now being discharged from the military after being diagnosed with Stage 4 cancer.

His brother had a tumor on his brain doctors couldn’t remove.

“They said they couldn’t operate. It would kill him,” Madden said.

In the midst of all this, Madden is clinging to his faith. In fact, he said, the tumor has gradually been shrinking. His brother is engaged and getting married this week.

Volunteering with Jesus Was Homeless has served as an eye-opener, according to Madden. He said when he was taking meals to people who live in extended-stay motels, he encountered individuals he never thought he would see there.

“ It’s surprising that the faces of the people that are out there are your co-workers,” Madden said. “You knock on a door and are surprised to see someone you never knew went through struggles. I just always saw that person as a friend or co-worker.”

“This is not some distant (thing) that you’re helping. It’s not people that you don’t know.”

Madden said some people question their own capacity to make a difference in the lives of others, but the real issue is making the effort, not individual qualifications.

Stallings was looking forward to a Christmas Eve service hosted by Jesus Was Homeless on the backside of the Vista Plaza Shopping Center across from Wal-Mart on 76 Country Boulevard at 7 p.m.

Stallings said the candlelight service would be a night of music and worship.

“A lot of folks from the motels can’t be with family or can’t go somewhere but they can be with us,” he said.