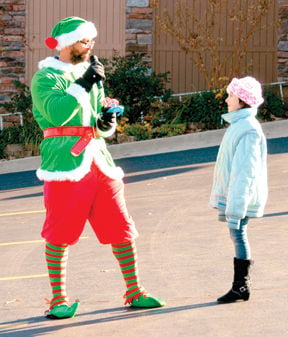 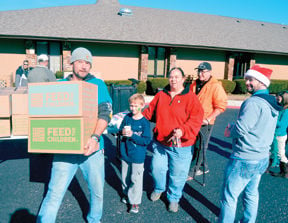 Joshua Prater carries food boxes for Robin Slighton and Randy Lemley, of Rockaway Beach. The pair and son Melvin Lemley, 8, were glad to receive volunteer help carrying food boxes passed out to the community during the Christmas Bash held Saturday at First Baptist Church of Branson.

Joshua Prater carries food boxes for Robin Slighton and Randy Lemley, of Rockaway Beach. The pair and son Melvin Lemley, 8, were glad to receive volunteer help carrying food boxes passed out to the community during the Christmas Bash held Saturday at First Baptist Church of Branson.

Visitor flow through the sixth annual bash held at the First Baptist Church of Branson’s Life Center last Saturday was streamlined due to the efforts of 175 volunteers.

According to Bash coordinator Terry Brown, everyone that volunteers is on the church service team. Volunteers represented all ages.

“Anyone who can get over here in less than 12 seconds gets a candy cane,” Ryan said, prompting a short dash by children lined up near him.

Madison and MacKenzie Bryant, 7 and 5, raced over and received candy canes handed out by Ryan. The girls were with their mother, Samantha Bryant, and looking forward to the bounce houses.

The Grinch (another volunteer in costume) suddenly appeared and playfully threw his arm over the shoulder of a visitor pretending to try to steal her purse.

Ryan informed those in line they could hug the Grinch but to make sure he didn’t take their wallet.

“See that lady in the yellow?” Ryan said. “That’s the Grinch’s keeper. He would be out of control otherwise.”

Ryan said the church is trying to connect with people through the prayer zone and find out how to pray for them. He said there is a team assigned to continue to pray over each family that visits the prayer zone after the event.

Waunetta Howard, of Branson, has volunteered all six years the Bash has been held. She was passing out popcorn and enjoying serving the community.

“Just the smiles and all the fun the kids have. It’s great to know we’re helping people,” Howard said.

Craig said a big part of their duty was to make sure nobody gets run over once people start leaving.

“I ain’t seen any reindeer yet,” he  said, “There are a lot of children in there. The turnout is real good.”

At that point, a father carrying two boxes, with two small boys following him appeared. The youngest, about two years old, was lagging behind.

“Titus, I’m carrying this, I can’t carry you,” the dad said.

Instantly Craig was on the scene, telling the boy, “I’ll help you.”

That was all the motivation the youngster needed. He jumped up and ran to his dad.

Branson seniors Bianca Hernandez and Regan Still carried food boxes to vehicles. Colton Hampton and Travis Franks are both 12 and also helped out with carrying boxes. Travis has helped with candy since the event started. Coleman Hoag, 10, is a first year-volunteer excited about getting to help and said he will do it again next year.

Her sons Andrew and Luke were there, too, carrying food and everyday needs boxes for patrons of the event.

All volunteers were needed because of the sheer volume of activity, Brown said.

He said the church buys a semi-truck load of groceries and other items from Feed the Children. Because Feed the Children specializes in purchasing and processing these items, this makes organizing the Christmas Bash easier.

Brown said an effort is made to improve the bash each year. This year, a shuttle system was added. People could call and a shuttle would pick them up and bring them to the bash.