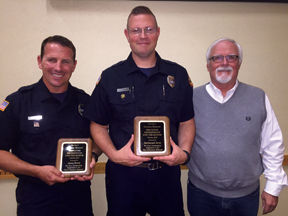 From left, Fire Engineers Jason Bruck and Nathanael Jones hold their employee of the month awards next to Alderman Rick Todd Tuesday evening. 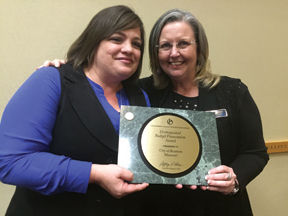 From left, Fire Engineers Jason Bruck and Nathanael Jones hold their employee of the month awards next to Alderman Rick Todd Tuesday evening.

Fire Engineers Nathanael Jones and Jason Bruck from the Branson Fire Department were recognized as employees of the month by Alderman Rick Todd Tuesday evening at the Board of Aldermen meeting.

In June, Jones and Bruck participated in the Make-A-Wish Foundation and the U.S. Army to help a recent high school graduate be an “Army Ranger” for a day.

“Wyatt Cooper, a 2015 graduate of Branson High School, was granted this wish as he battles a life threatening condition known as aplastic anemia that causes difficulty in producing red blood cells,” Todd said.

Jones is active in the Army Reserves and used his connections between the Fire Department, Make-A-Wish Foundation and the elite 75 Army Ranger Regiment to make the wish come true.

“He worked to secure the city’s training facilities, meals for the participants, and liability releases for all attendees. Engineer Bruck, an Air Force Veteran, assisted with the logistics of the rappelling scenarios using the city’s portable training tower,” Todd said.

“Engineers Jones and Bruck humbly made this day a success and kept the focus on Wyatt and the Army Rangers. Both displayed the values of teamwork, cooperation, volunteerism, safety service, courtesy and excellence.”

Mayor Karen Best was happy to see Wyatt Cooper at the Board of Aldermen meeting.

“I had the opportunity to watch as Wyatt went through all his activities and he was a real trooper,” Best said. “All of our fire department did such a wonderful job and Wyatt I’m so glad to see you  here tonight.”

“I’m very proud of our firefighters. We sent three firefighter honor guards to Kansas City for the funerals of the two firefighters who lost their lives in Kansas City. And it’s just a true testament to the leadership of our chief and how he values those who serve with them.

The city of Branson received the distinguished budget presentation award from the Government Officers Association.

“This award is the highest form of recognition in governmental budgeting and represents a significant achievement within our organization,” Mayor Karen Best said.

When a city receives this award, a certificate of recognition is presented to the individual or department responsible in obtaining the award.

“This is presented to the finance department and I’m so proud of (Finance Director) Jamie (Rouch) and all of her group. They do such a fabulous job,” Best said.

Rouch paid tribute to her co-workers and the city.

“It’s just an honor to be able to work here for the city, the values that it holds, and my staff is truly amazing. I’m not just saying that. We are more than just co-workers, we are friends too. It makes it very pleasant to come to work everyday, so thank you,” Rouch said.