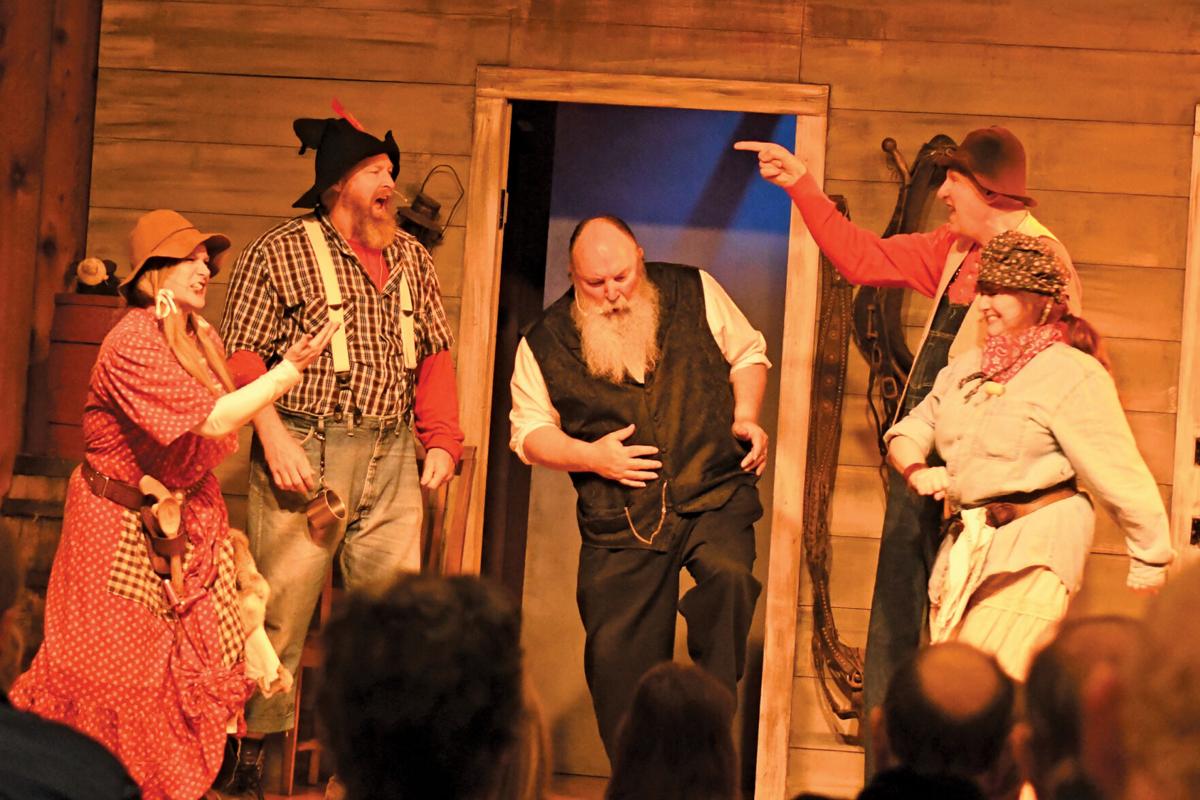 Ma and Pa Gibbs and Ma and Pa Stewart get into an argument with Brother Billy Goat right in the middle. 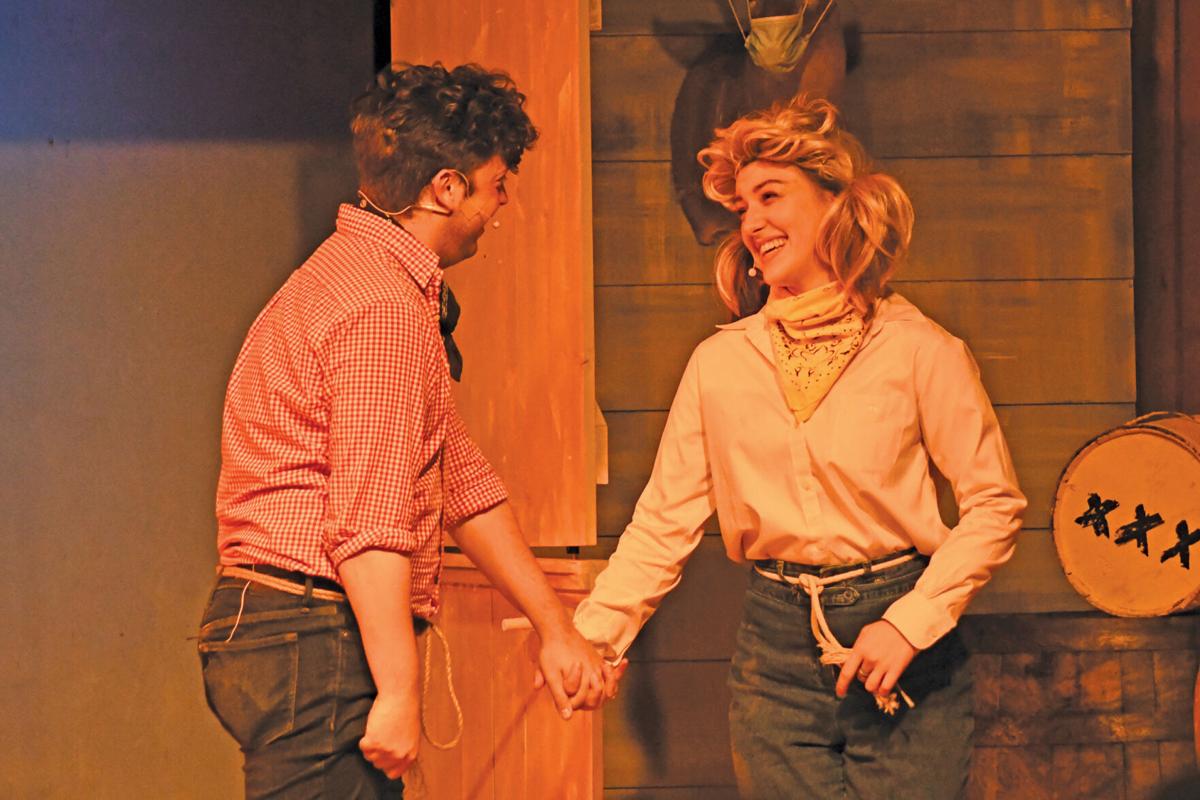 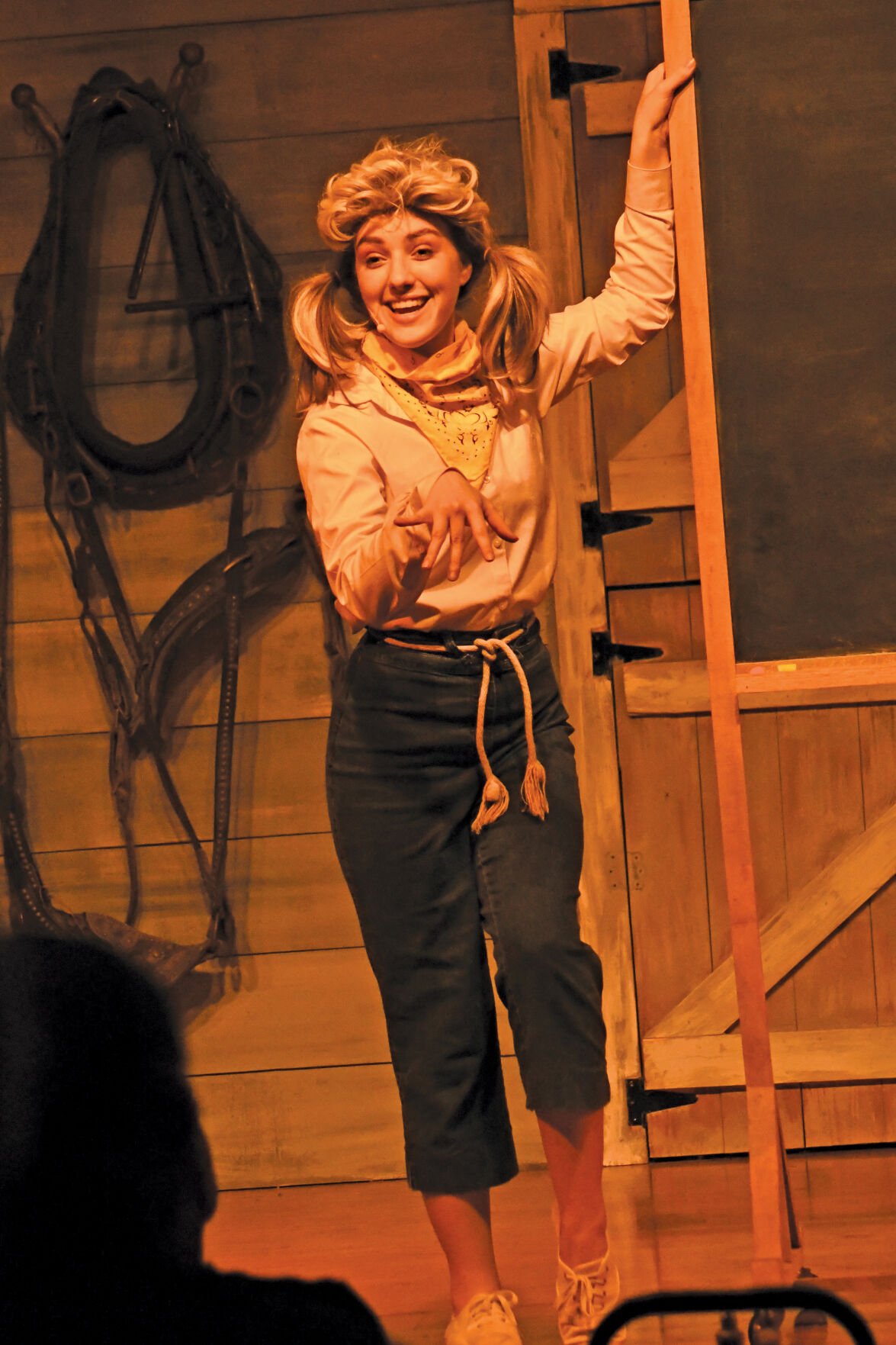 Cindy Loo Stewart explains to the audience why she brings along her trusty chalkboard with her everywhere. 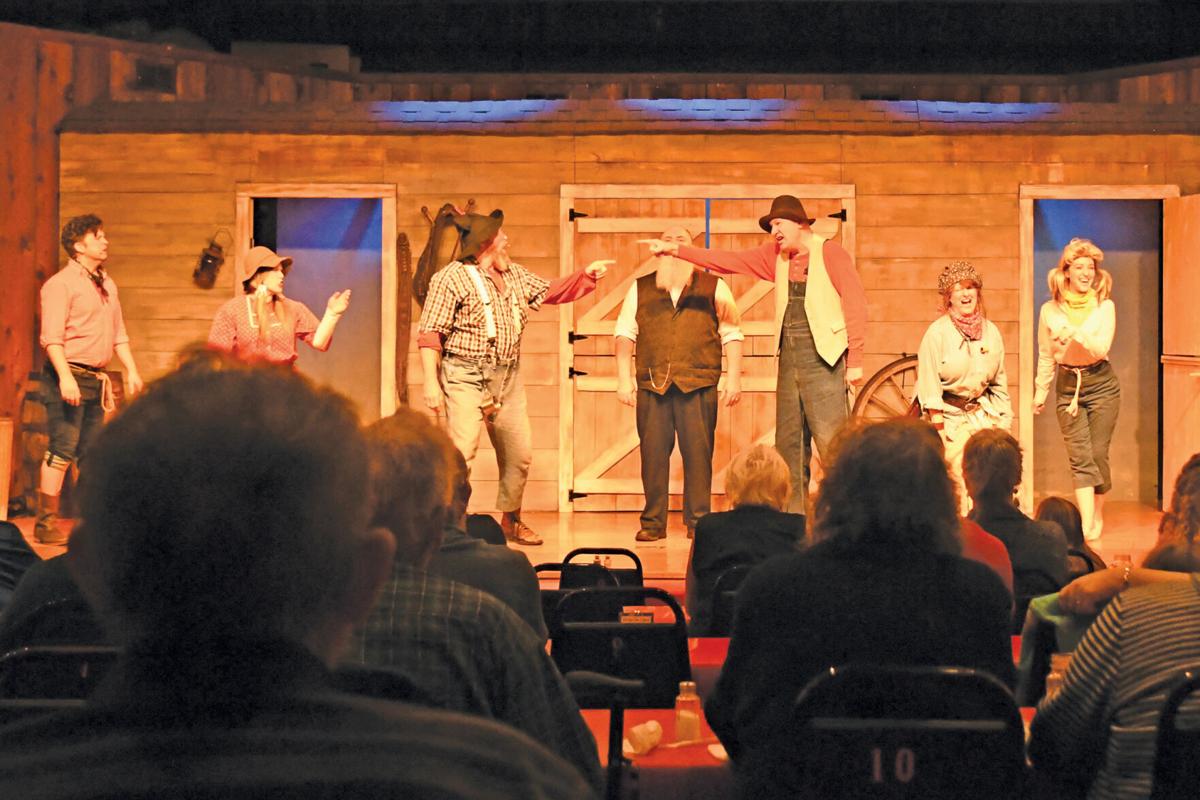 There’s a lot of finger pointing during the Funny Farm Dinner Feud show at Shepherd of the Hills. 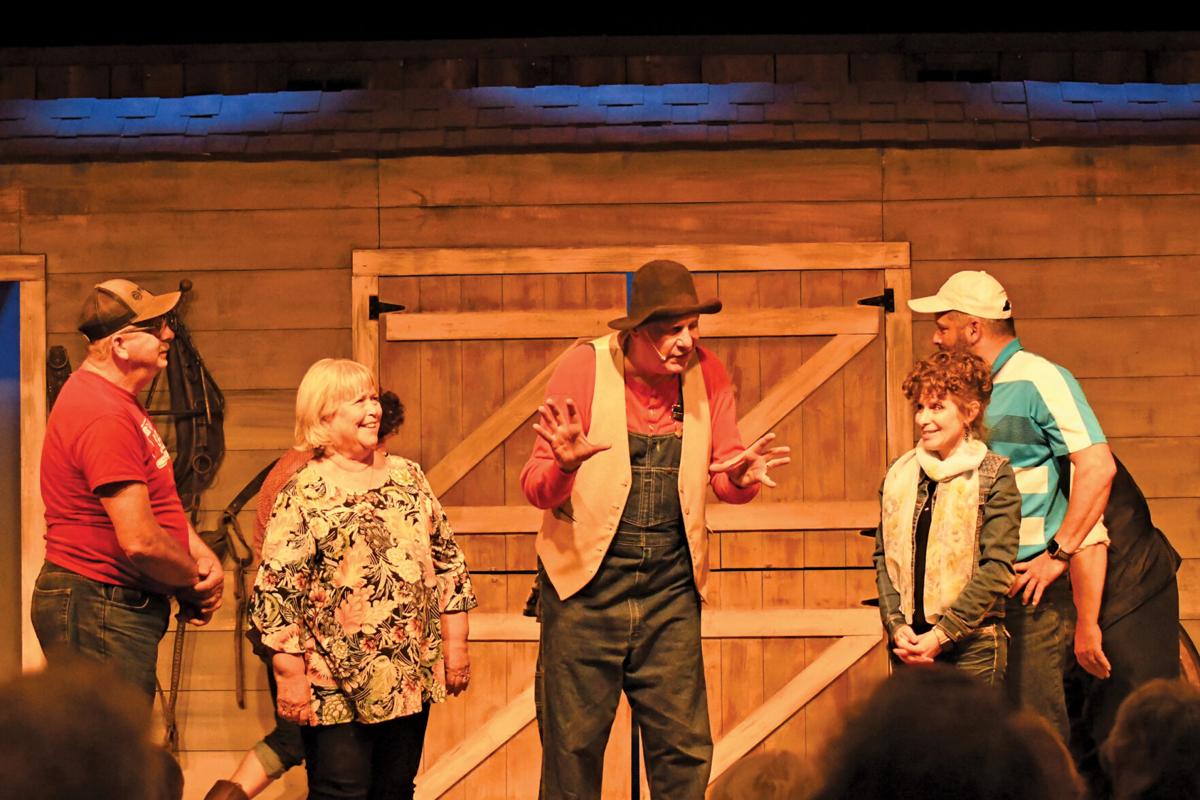 Pa Stewart explains to a group of audience members the rules for the next game they’re going to play together. 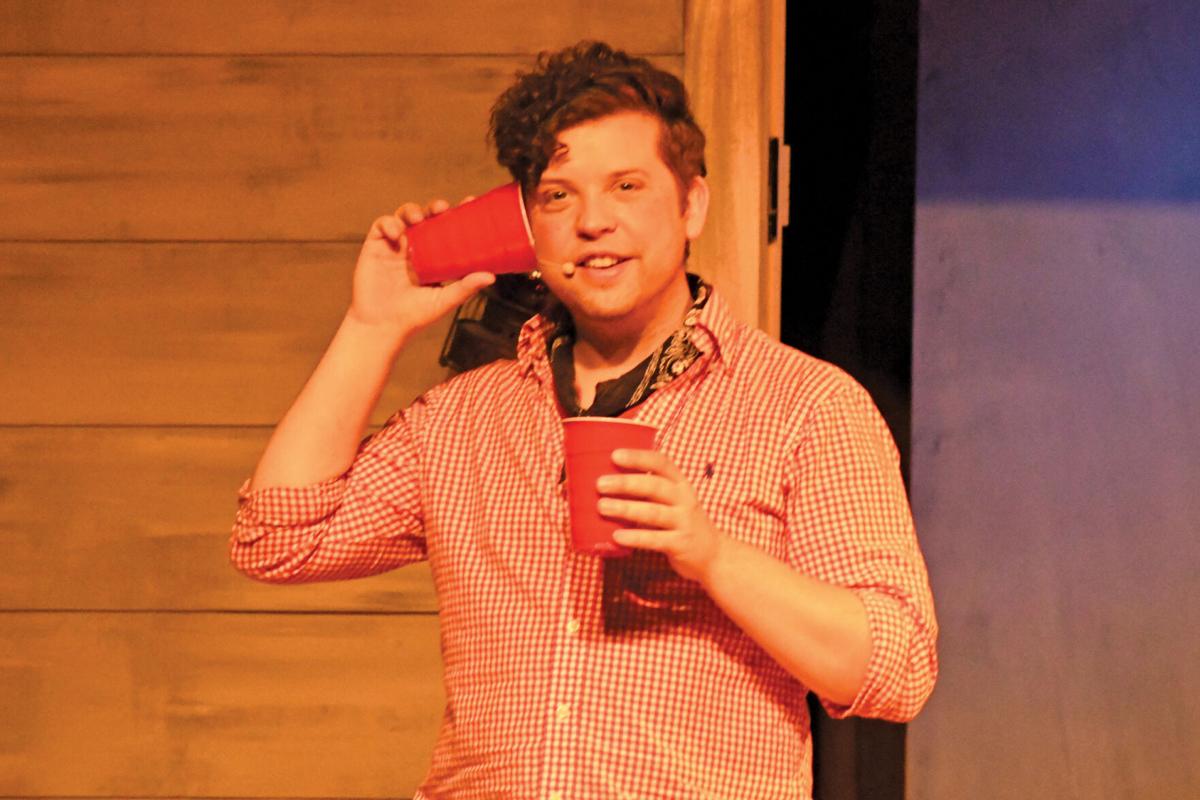 Leroy Gibbs takes an important phone call during the show. 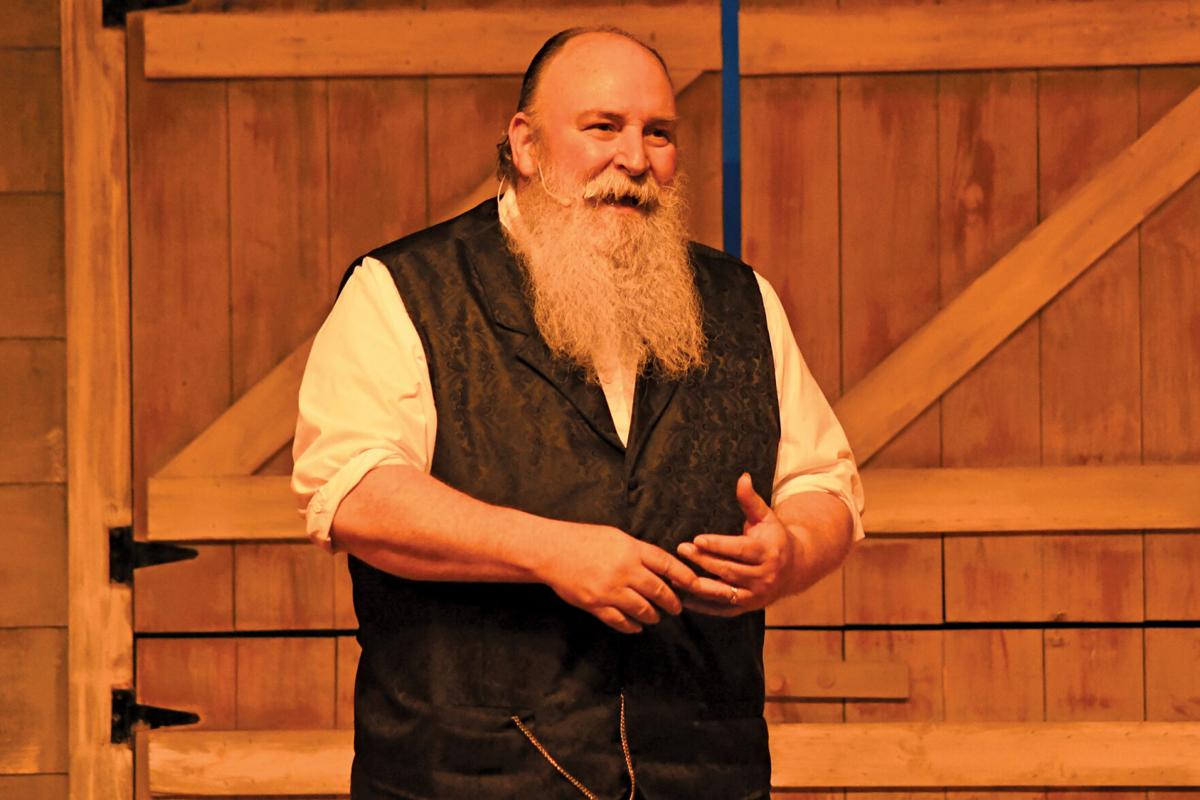 Ma and Pa Gibbs and Ma and Pa Stewart get into an argument with Brother Billy Goat right in the middle.

Cindy Loo Stewart explains to the audience why she brings along her trusty chalkboard with her everywhere.

There’s a lot of finger pointing during the Funny Farm Dinner Feud show at Shepherd of the Hills.

Pa Stewart explains to a group of audience members the rules for the next game they’re going to play together.

Leroy Gibbs takes an important phone call during the show.

Shepherd of the Hills is inviting folks to become a part of the family by joining them for their Funny Farm Dinner Feud, one of the newest shows at the Playhouse Theatre.

For generations now the Stewart family and the Gibbs Family have been feuding. During the show, audiences will witness as the families are given the chance to put an end to the feud once and for all, according to Funny Farm Dinner Feud Writer and Director Jae McFerron.

“They’re feuding hillbilly families and they have booked the same hall on the same day, at the same time for their respective family reunions. They don’t know this until they get there and find out that all their kin folk are there,” said McFerron. “They try to settle the feud there and to keep order, the preacher — his name is William Goat and everyone calls him Brother Billy Goat — the preacher steps in and acts as a referee and they settle the feud using a contact of wacky hillbilly skills.”

McFerron explained that the feuding gets even more intense when the teenagers of the feuding families, Cindy Loo Stewart and Leroy Gibbs are caught holding hands.

“It’s lots of slapstick humor. We take a trip back in time to the days of Branson shows when hillbillies were standard. When I first came here, I came here in 1978 to work at Silver Dollar City and we were very proud to be hillbillies,” said McFerron. “We represented them in a way that was a lot of fun and it was very interesting and colorful and very friendly. That’s what we portrayed these hillbilly families to be too.”

As a part of the show, McFerron said they decided it would be fun to place the members of the audience right in the middle of all the action.

“Everybody that sits on the right half of the audience are members of the Stewart family and everyone that sits on the left side of our audience … are members of the Gibbs family,” said McFerron. “When we start trying to settle the feud, our hillbilly families recognize some of their long lost kin that have come to the family reunion and we meet them too. Those are folks in the audience and we have them stand up and the folks in the audiences kind of take on the persona or the character of our long lost cousins either of the Stewart’s or the Gibb’s.”

As the show goes on, audience members will even have the opportunity to perform alongside the cast.

“These folks come up on stage and help these two feuding families settle the dispute by helping them and competing in these games. It is a lot of fun,” said McFerron. “We have people come up on stage and lots of photographs and lots of excitement and great music that drives the energy of it that’s kind of a hillbilly sound that you have in the theatre. Lots of great sound effects and lots of action, it’s very loud and flashy and it’s just a lot of fun.

“Kids are in love with the show, because it’s so exciting and there’s so much going on.”

As the production is a dinner show, the audiences are treated to a meal of family harvest succotash, pan-seared chicken breast, smoked sausage, old-fashioned fried potatoes, a dinner roll and a drink. McFerron said all the meals are prepared right there on-site.

“We have an incredible kitchen staff and our executive chef, his name is Matt Monroe. Matt is an ex-military chef who has cooked for presidents and generals across the globe. He’s very, very talented and he’s got a crack staff that are just wonderful, just great cooking,” said McFerron. “Each show that we do dinner in the Playhouse Theatre for has its own unique menu. That’s something people will see. They don’t come here and get the same turkey and dressing for every meal. That’s not what we do here. They look at the show and they try to find the character of the show and the personality of the show and then the menu that goes with that show should reflect that personality. It’s just a real interesting, unique way of presenting dinner theatre.”

McFerron shared the inspiration for the production actually began with just the title of the show.

“There’s a lot of brainstorming that goes on here. Between Jeff Johnson, the general manager and owner, and Steve Faria, owner, and the staff here in the production crew, we do a lot of brainstorming. That includes just titles and characters and all the things that go with creating shows. I believe it was Jeff that came up with the title Funny Farm. We thought that was just terrific. We had a title to a show and then we wrote the show to fit it.”

For the show, McFerron said they also wanted to create a show that honored the location of the theatre and the surrounding attraction.

Due to the success of the show and the amount of tourists that have begun their return to Branson, McFerron said Shepherd of the Hills has decided to offer even more opportunities for guests to come see the show.

“We’re adding more shows for Funny Farm and the Who Dun it Hoedown,” said McFerron. “We’re very blessed. We’ve been very successful with both and we’re very, very happy.”