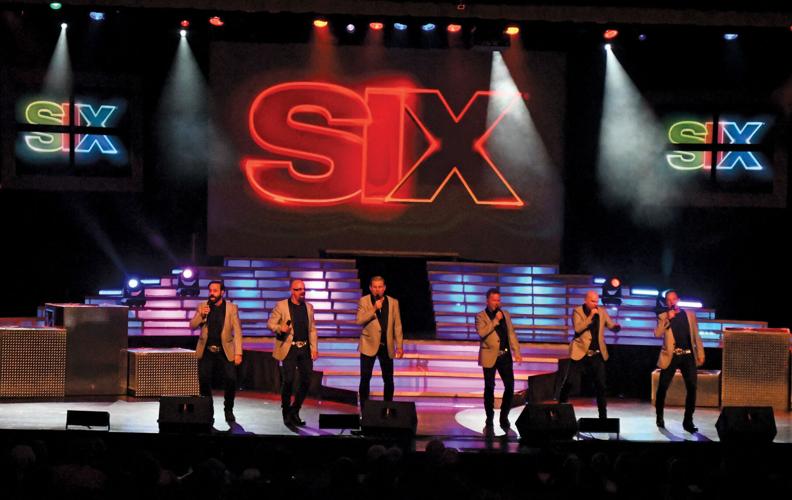 SIX is six again for the entire show as Charles Knudsen joins his brothers Barry, Lynn, Jak, Owen and Curtis on stage for the new 2022 show in Branson. 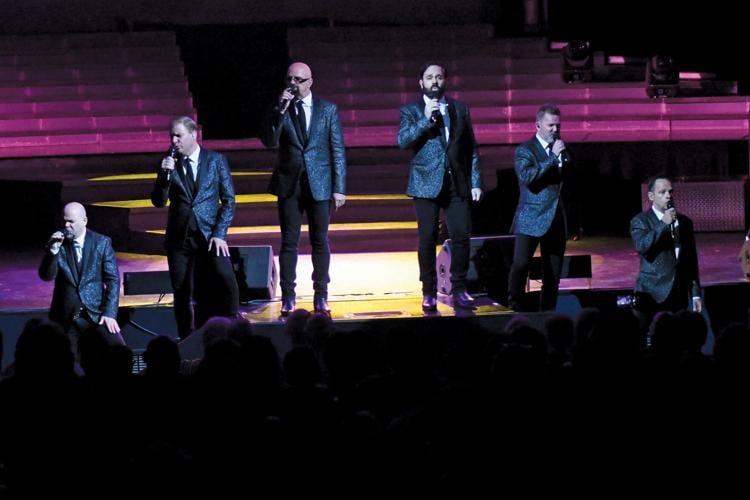 SIX is celebrating their 16th full season in Branson in 2022 at Dick Clark’s American Bandstand Theater. 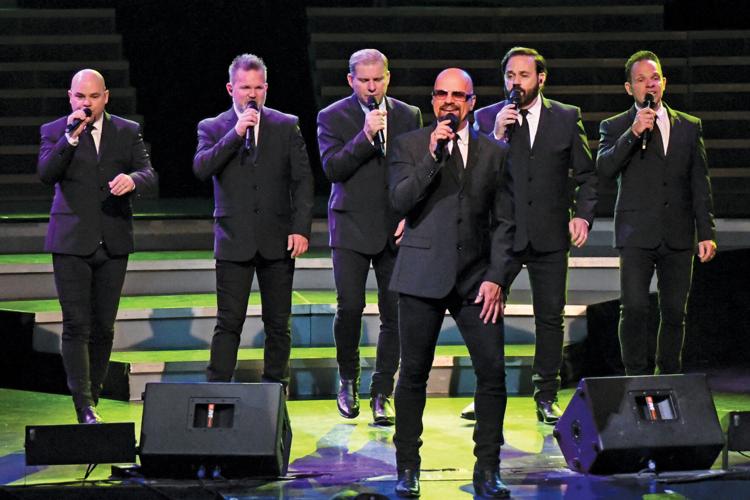 Owen, Curtis, Charles, Jak, Barry and Lynn Knudsen performing a part of their Beatles melody during the 2022 SIX Show. 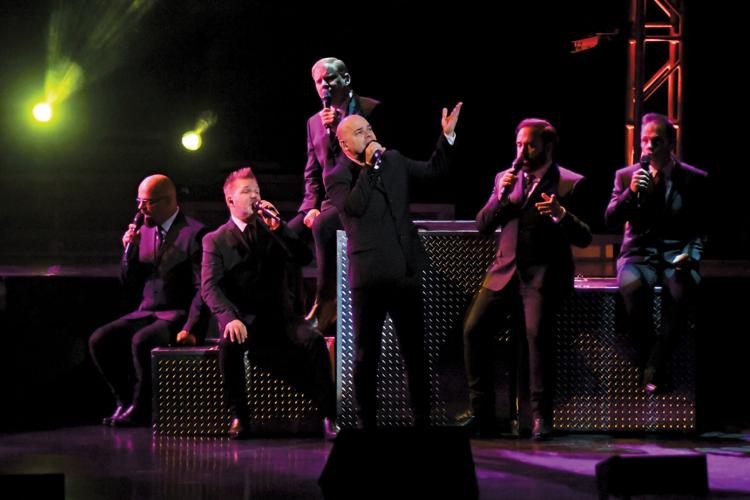 With Owen at the center, the brothers sing without any instruments, using only their mouths and microphones. 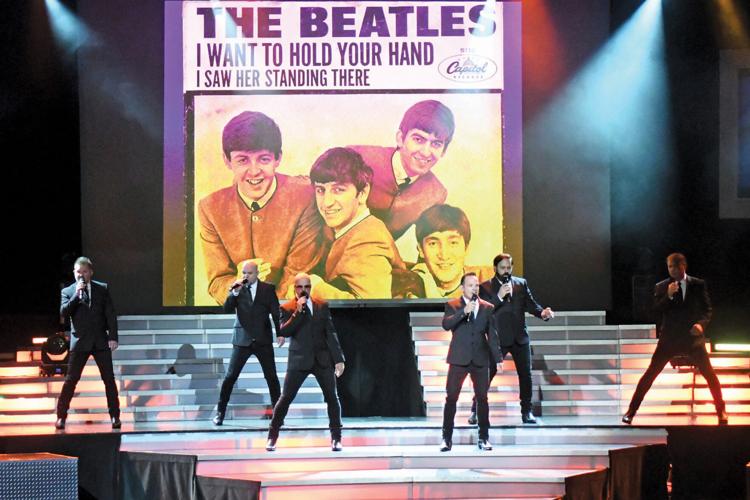 New to the 2022 SIX show is the addition of The Beatles songs, which begins with the opening of the second half. 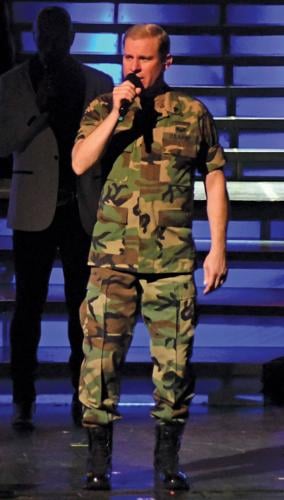 Charles Knudsen, the youngest of the Knudsen brothers, is the newest member of SIX, joining the show in 2021.

SIX is six again for the entire show as Charles Knudsen joins his brothers Barry, Lynn, Jak, Owen and Curtis on stage for the new 2022 show in Branson.

SIX is celebrating their 16th full season in Branson in 2022 at Dick Clark’s American Bandstand Theater.

Owen, Curtis, Charles, Jak, Barry and Lynn Knudsen performing a part of their Beatles melody during the 2022 SIX Show.

With Owen at the center, the brothers sing without any instruments, using only their mouths and microphones.

New to the 2022 SIX show is the addition of The Beatles songs, which begins with the opening of the second half.

Charles Knudsen, the youngest of the Knudsen brothers, is the newest member of SIX, joining the show in 2021.

Barry, Lynn, Jak, Owen, Curtis and Charles Knudsen are back for another season at Dick Clark’s American Bandstand Theater in Branson as they present audiences with the newest edition of their show, SIX.

Since November of 2006, SIX has been performing in Branson and experienced their first full Branson show season in 2007; making 2022 their 16th full season in town.

Charles Knudsen, the newest member of SIX and the youngest of the onstage brothers, shared what audiences can expect to see when they join them at the theater this season.

“They can expect to hear something from whatever genre of music that they are a fan of. There’s one more thing that we’ve been wanting to install from the beginning of the year that we haven’t been able to and it’s almost ready. I’m not going to give it away,” Knudsen said. “There is literally something for everyone. There’s never a dull moment, because of everything going on. There’s even falling on the floor comedy.”

Knudsen added, what makes this year’s show special for both audiences and him as the newest member, is the return of some fan favorite songs.

“There’s been some things that have been brought back into the show that I had seen before that just blew me away every time I watched my brothers perform them. Then they’re like, ‘We’re going to bring this back.’ I’m like, ‘Oh my gosh, that was one of my favorite things to hear you perform over the years and I get to be a part of it.’ Then I’m like, ‘Oh wait, I have to learn a part to that,’” Knudsen said with a nervous laugh. “Let me tell you, some of this stuff, it gave me a whole new appreciation for what my brothers have learned how to do and how they’ve arranged stuff.”

In addition to some returning favorites, SIX has also sprinkled some all-new pieces into the 2022 show; including a tribute to The Beatles, which opens up the second half of the show.

“When we were learning it and when it was coming together, I just remember going, ‘This thing is so good. The way that we end it, audiences are going to love this thing.’ Then we got out on stage and started doing it and it ended up being so much bigger than we even thought,” Knudsen said. “There are some nights when the crowd is mostly older, that’s their music, and when we start the second half the audience just comes alive like they hadn’t before. That’s the biggest thing. There’s a couple of things that people have absolutely loved in the show that are back. The audiences are going to see something that is different enough with SIX that they’ve never seen before.”

Knudsen, who is a Marine and Army veteran, officially joined SIX last summer. When he first began performing, he would only come out on stage with his brothers at the end of the show for the veterans tribute. In the months since, Knuden has become a part of the entire show and said he’s been working diligently to learn everything his brothers can teach him.

“It was a lot of work at the beginning of this year, during our off season, to get me up to speed to be able to do this for two hours. Even when they throw me off stage (which is part of a comedy bit), I’m still singing backstage everything that’s going on and catching my breath,” Knudsen said with a chuckle. “Everything I’ve done up to that point has been so physical from breaking out and trying to get the crowd excited during the opening…It’s a pretty taxing thing to sing that much for two hours everyday and to do it at the level to try and match the level that my brothers do it so effortlessly.”

As the months have gone by, Knudsen shared he’s continued to feel more comfortable and more at home on the stage.

“I’ve pretty much gotten over all of the nervousness. Even this year when all of the focus would be on me and I knew I really had to portray something just so exact, I’d still be nervous,” Knudsen said. “When I was just part of the ensemble it was no big deal, but as the focus would get on me I’d start getting a little nervous and my heart rate would go up and it would affect my voice. But I’ve gotten to the point now where some shows, it feels like I’m just going through the motions for most of it. I’ve got to go, ‘I can’t let myself get lackadaisical,’ because that’s when I’ll start making mistakes.”

Being the youngest of the 10 brothers, Knudesn grew up watching his siblings sing. Knudsen shared spending the last four decades as a member of the audience and now getting to perform onstage with his brothers has provided him with a unique perspective.

“We wear in-ear monitors and I get to hear when everything is perfect between us even before it hits our sound guy. There’s just times when I’m up on stage and I’m going, ‘Oh my gosh, this is so good. This is so good and my brothers don’t even know how good it is.’ Because they haven’t heard themselves from an audience perspective and now from singing with them like I have.”

Knudsen said he hopes when the audience sees how much fun he’s having on stage, they’ll also have a good time.

“We put on a really entertaining and fun show. Anyone from elementary school age all the way up to that couple that was married for 67 years today. That’s what I’ve always believed about SIX, even before I was a part of them, is it’s a very high energy entertaining show for everybody. To come and be a part of it has been pretty wild to get to the point where I am now has been a lot of hard work, but it’s been rewarding.”

For the first time since before the pandemic, the members of SIX have been joining audiences out in the lobby after the show for meet and greets. Knudsen said meeting folks after their show has provided him with a humbling reminder of the impact their music can have on people.

“After the show, the things that people come up and tell us, the personal things. They talk about how they had some tragedy in their life and something we sang reminded them of it because it was so personal and it gave them comfort and they thank us,” Knudsen said. “The only thing I can just say is, ‘I’m very glad I was able to help bring a measure of peace in your life for just a few brief moments.’ When people tell me those things that means more to me than I can express.”

SIX performs at Dick Clark’s American Bandstand Theater, located at 1600 W. 76 Country Blvd in Branson. Showtimes for SIX are at 3 or 8 p.m. on select dates through the rest of 2022.

For additional information or to reserve tickets visit thesixshow.com or call the box office at 417-339-3003.