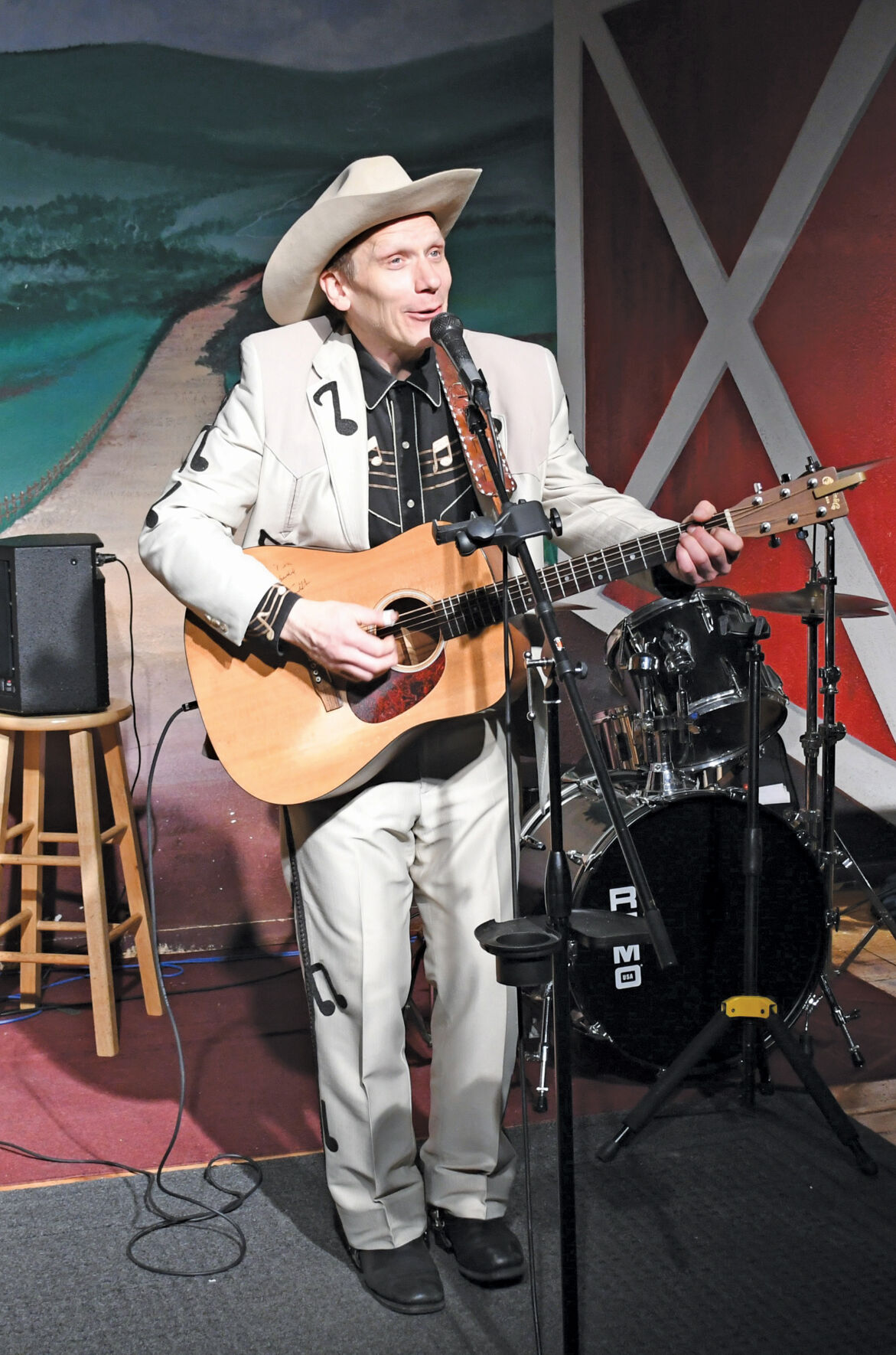 Tim Hadler as Hank Williams during the Hank Williams Revisited show. Hadler is currently performing three shows at the Little Opry Theatre inside the Branson Imax. 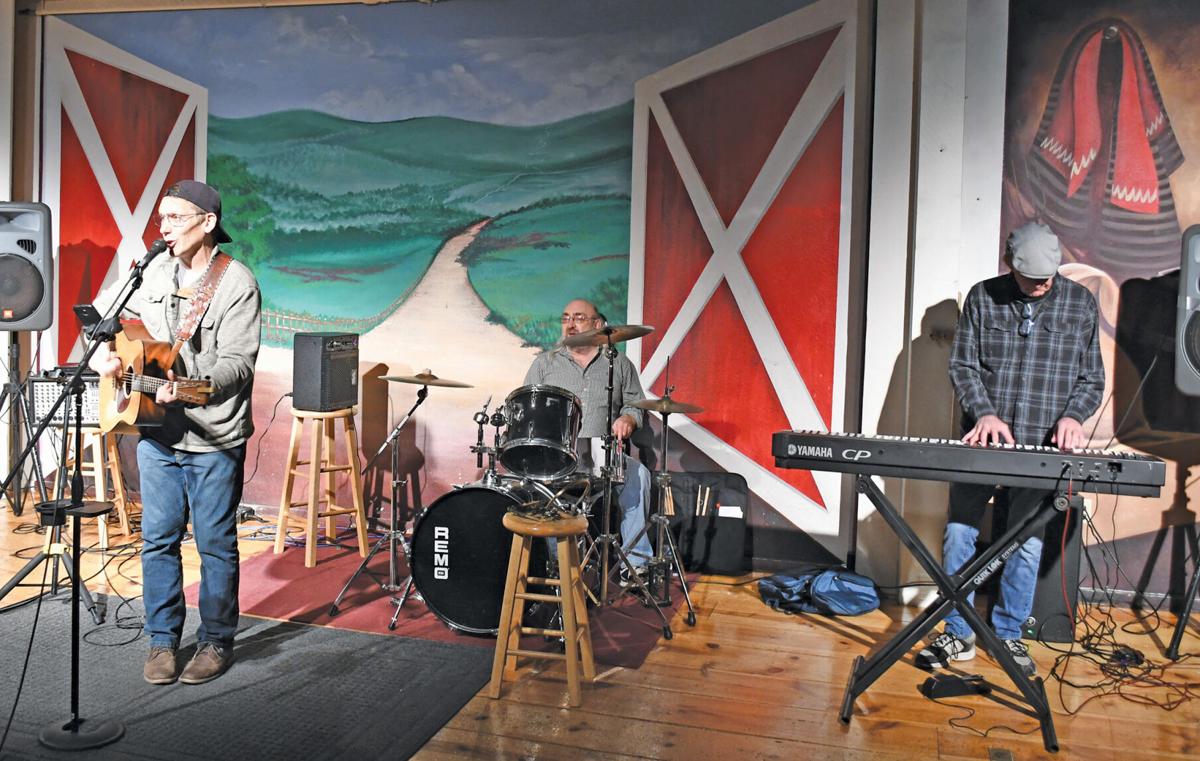 Tim Hadler, Paul Oney and Daryl Croy perform a number together during the Old Time Rock and Roll show. 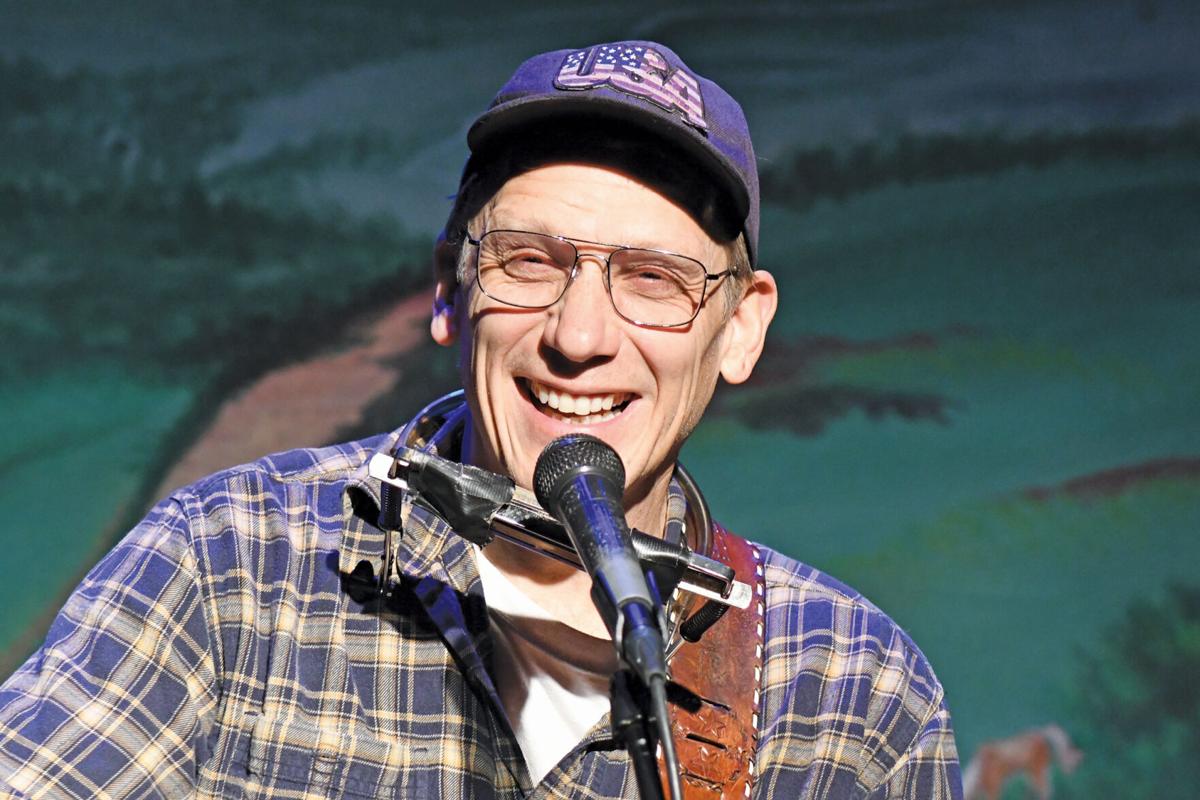 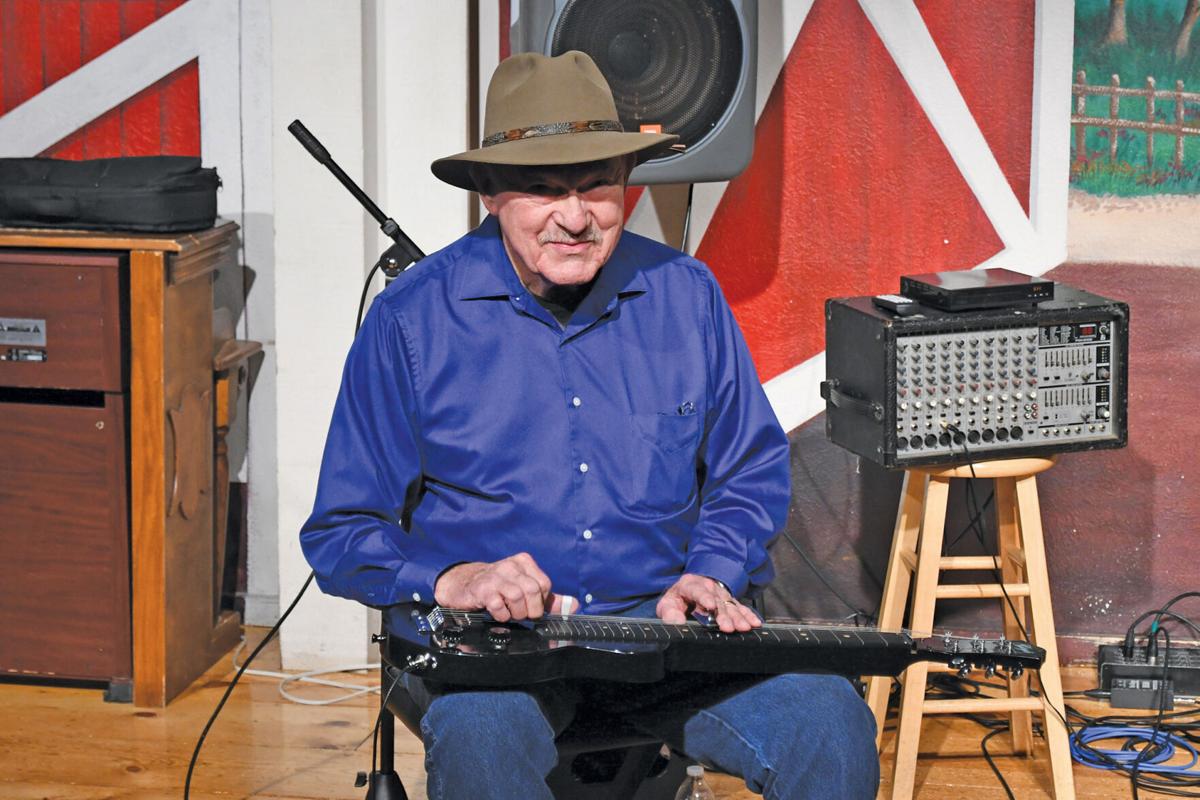 Bob Tuttle performs on the steel guitar during the Hank Williams Revisited show. 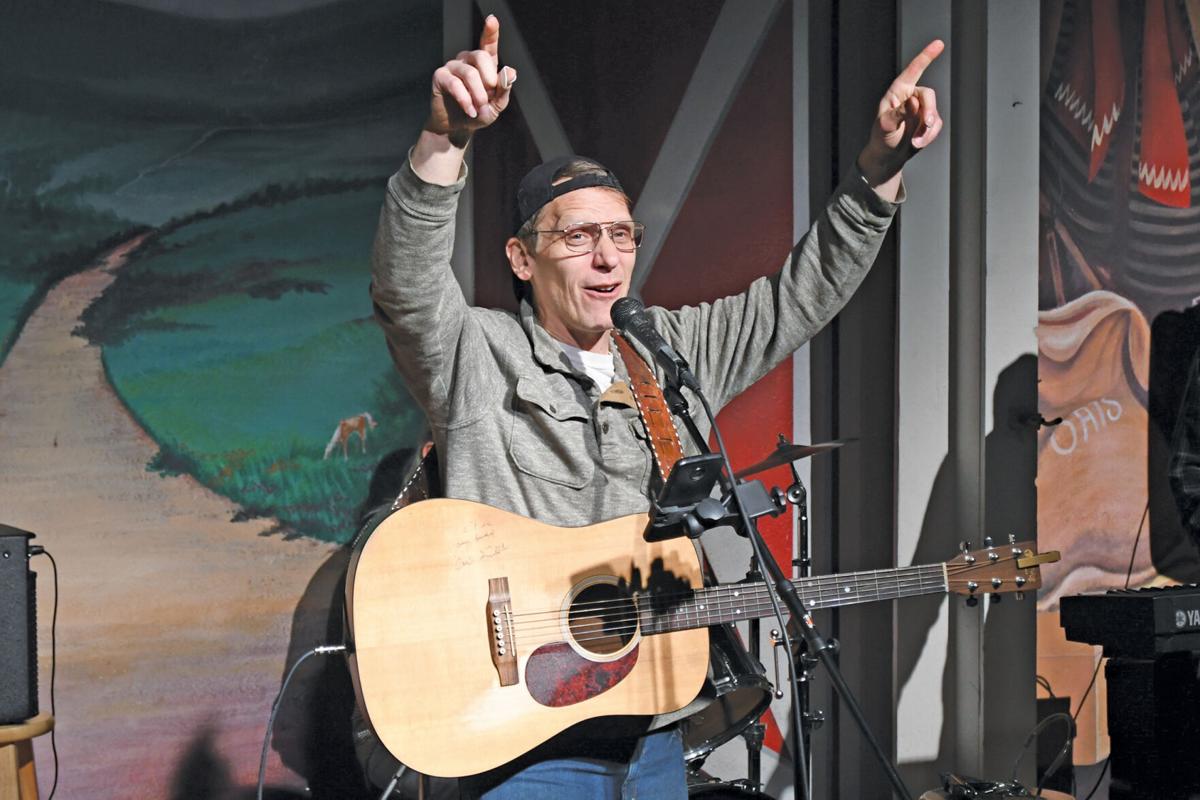 Tim Hadler points to the crowd during a performance of Old Time Rock and Roll at the Little Opry Theatre. 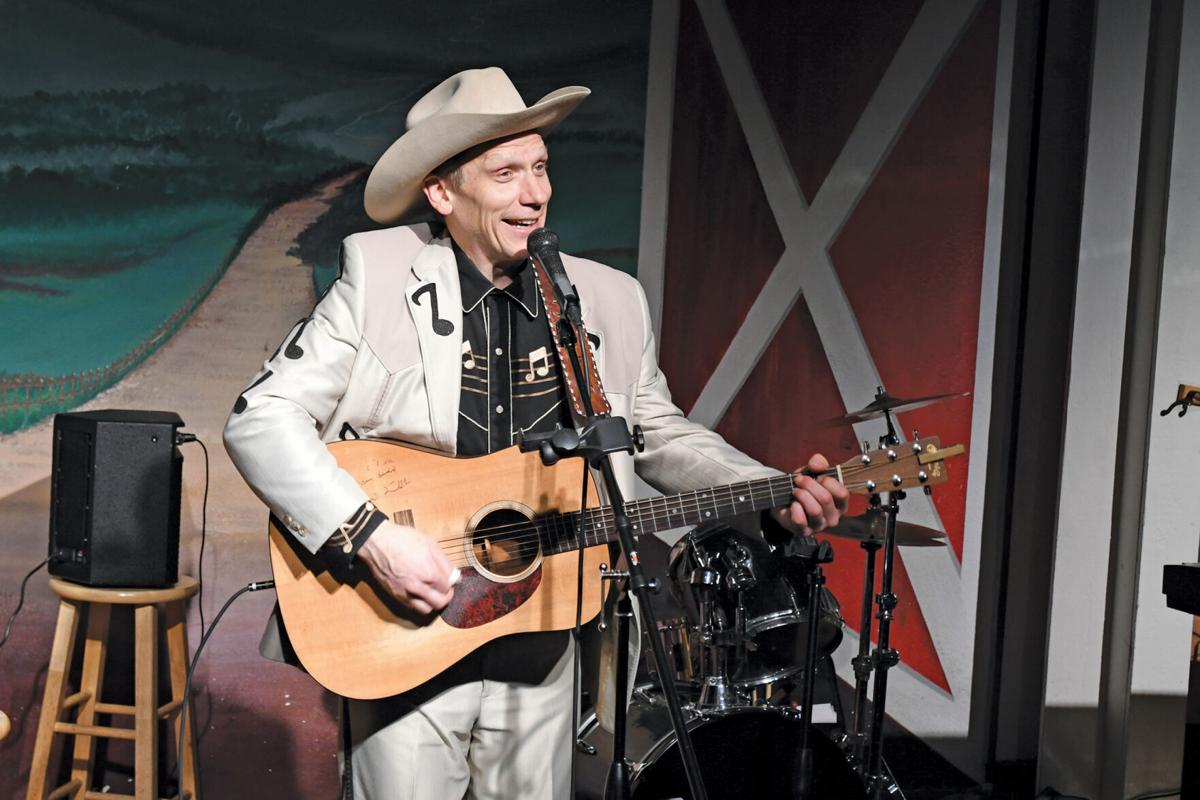 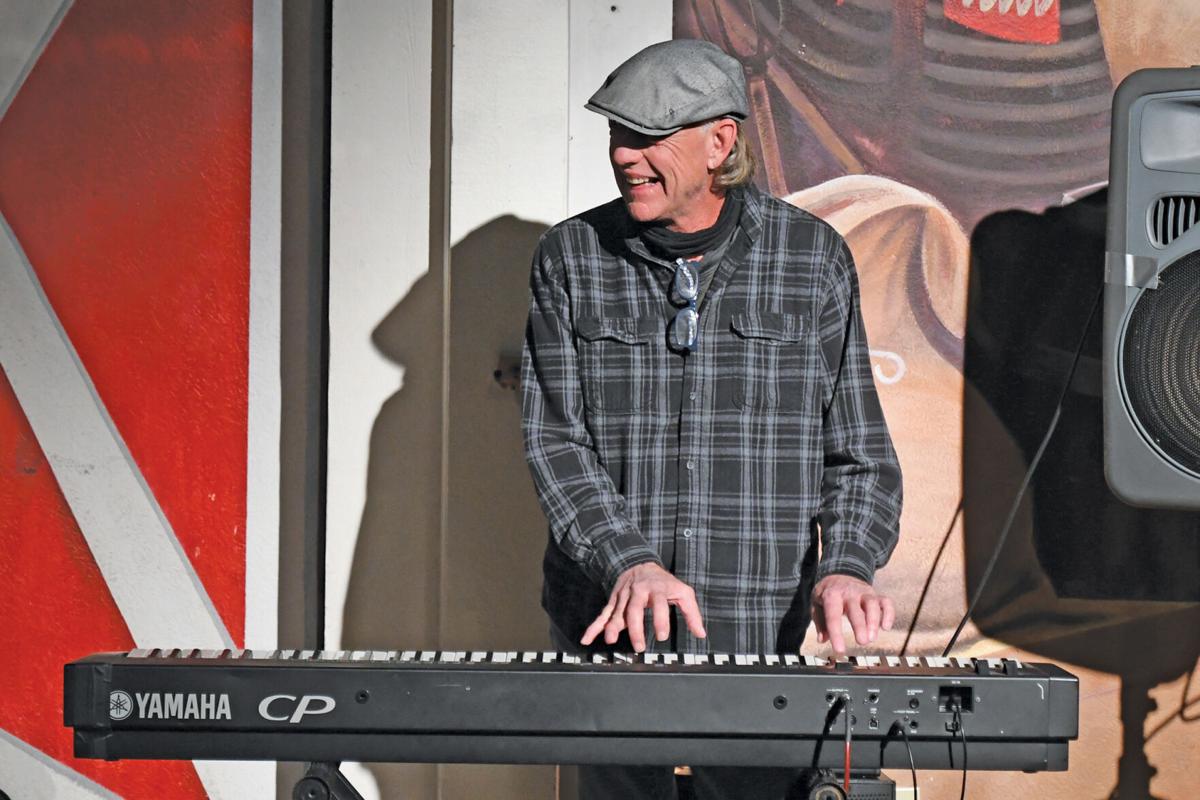 Tim Hadler is joined by Daryl Croy on the keyboard for the Old Time Rock and Roll show. 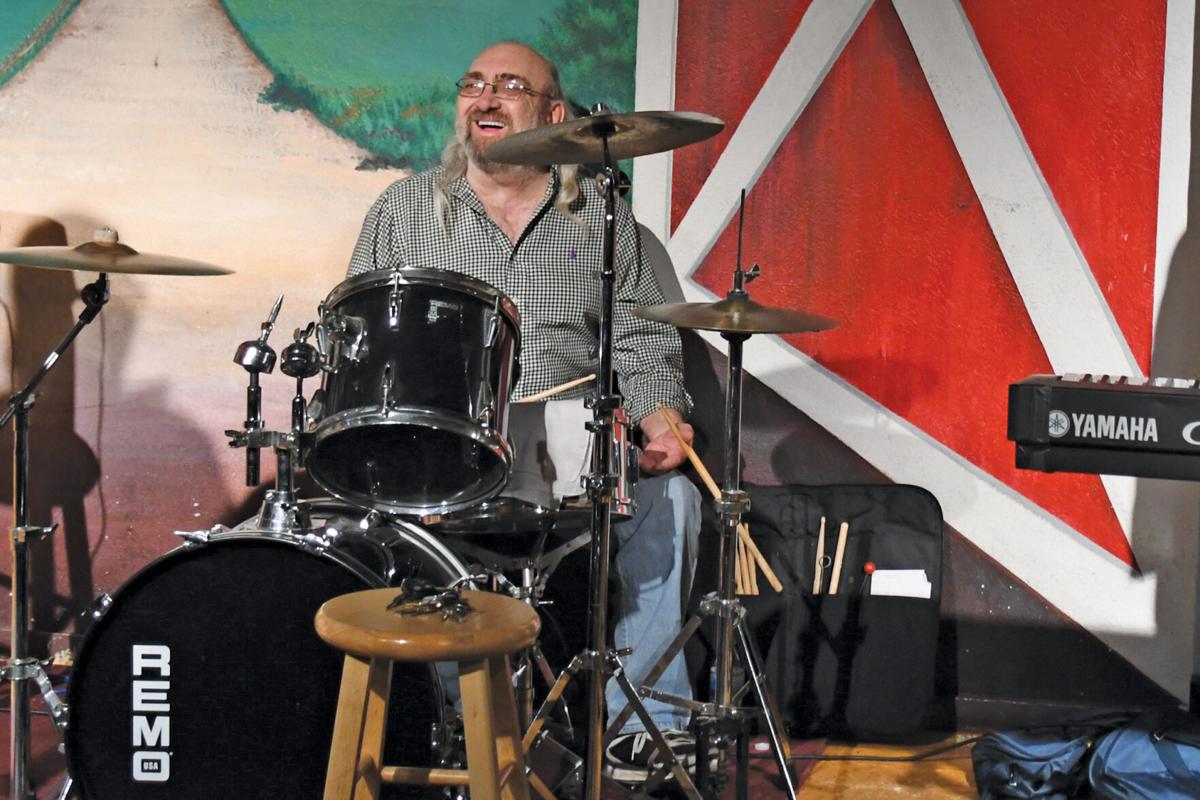 Tim Hadler is joined by Paul Oney on the drums for the Old Time Rock and Roll show. 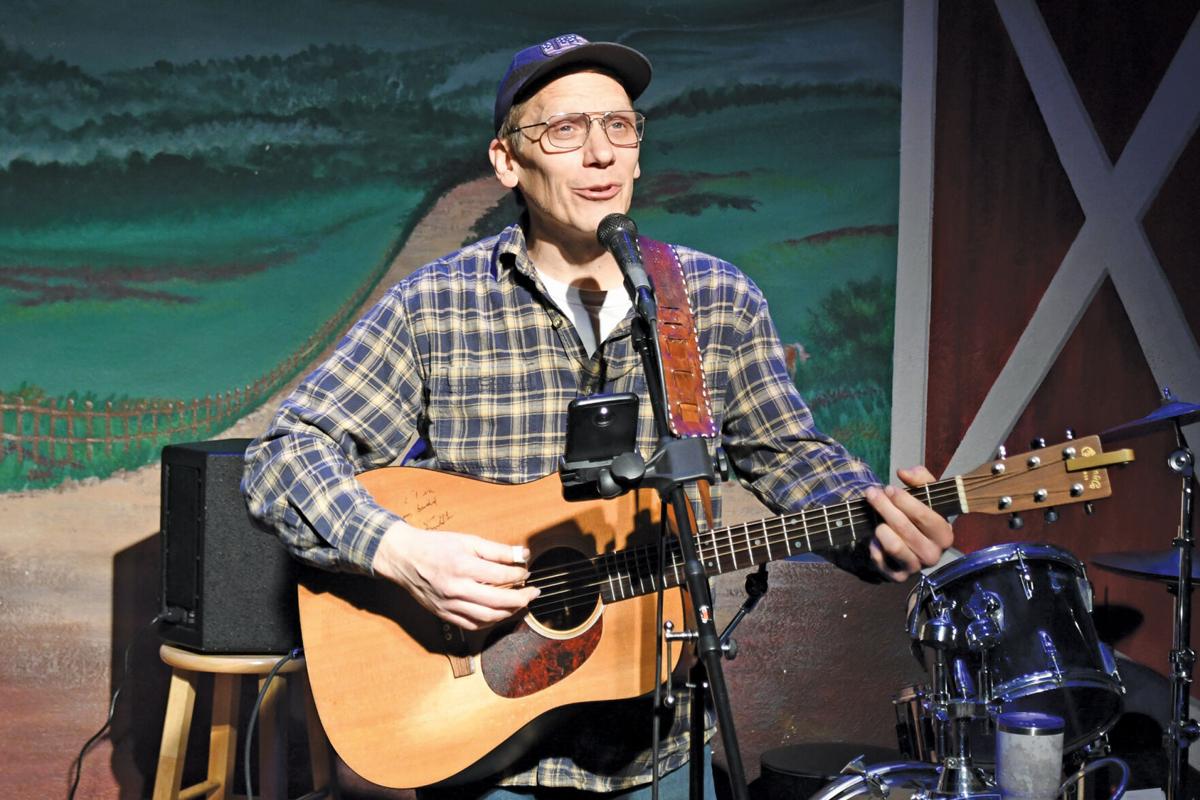 Tim Hadler performs a song by Bob Dylan during his Folk Music Hour show at the Little Opry Theatre.

Tim Hadler as Hank Williams during the Hank Williams Revisited show. Hadler is currently performing three shows at the Little Opry Theatre inside the Branson Imax.

Tim Hadler, Paul Oney and Daryl Croy perform a number together during the Old Time Rock and Roll show.

Bob Tuttle performs on the steel guitar during the Hank Williams Revisited show.

Tim Hadler points to the crowd during a performance of Old Time Rock and Roll at the Little Opry Theatre.

Tim Hadler is joined by Daryl Croy on the keyboard for the Old Time Rock and Roll show.

Tim Hadler is joined by Paul Oney on the drums for the Old Time Rock and Roll show.

Tim Hadler performs a song by Bob Dylan during his Folk Music Hour show at the Little Opry Theatre.

While the pandemic and winter months have slowed the tourist traffic down in Branson quite a bit, it’s not stopped Tim Hadler from jumping on stage nearly every day so far in 2021 to perform at least one of his three shows in the Little Opry Theatre.

Though Hadler has been performing his show Hank Williams Revisited for nearly 20 years in Branson, this winter he introduced two new shows to the Little Opry Theatre, which sits inside the Branson Imax Entertainment Complex. The first new show, the Folk Music Hour, is currently playing at 1 p.m. on Mondays, Tuesdays and Wednesdays. During the show audiences are treated to classic folk music from the artist’s that have had a direct influence on Hadler over the years.

“Folk Music is amazing. You’ve got, really the father of it, Woody Guthrie. But there’s so many branches of it from John Denver to James Taylor to Loggins and Messina and we do all that. So it’s an opportunity just to hear some of the songs maybe you hadn’t heard in a while,” said Hadler. “The thing that I really like about folk music is the words are so clear and usually there’s such a peaceful message in a lot of it or a strong message. Bob Dylan has a lot of strong messages, so we do Bob Dylan as well, throw in some Eagles and have a good time.”

Hadler also shared what it was that inspired him to bring this show concept to the Branson stage.

“My aunt used to be a fire watcher. In the old days you didn’t have internet to see where the forest fires are, so she’d be up in a tower like 30 or 40 feet off the ground. She’d have a guitar and she used to play it up there,” Hadler said. “I used to spend my summers at my aunt’s house and it was that guitar that I learned on. I was looking through her book just over the years and thinking there’s so much great music here, I’d love to do a folk show someday. So that really inspired me to do the folk show.”

Also making its Branson debut this season is Hadler’s Old Time Rock and Roll show, which is currently running every Monday, Tuesday and Wednesday at 5 p.m.

“We start off with Bob Seger’s ‘Old Time Rock and Roll.’ We do CCR (Creedence Clearwater Revival). We do Elvis of course, the King of Rock and Roll. We do some Beatles. Kind of what really put rock into high gear was Ricky Nelson from the show ‘Ozzie and Harriet,’” said Hadler. “Ozzie put his son on (the show) singing and … what happened was the following week (Ricky’s) record came out and sold over a million records. Never done before. See, this was the first time really TV promoted something. I bring light to that in the show that little Ricky put it out there.”

Joining Hadler for this show are Paul Oney on the drums and Daryl Croy on the bass guitar and keyboard.

“I just really enjoy the music and the reaction we’ve been getting from the crowd has been cool with the Rock and Roll,” Hadler said. “I would love to do that through the season myself. I think it would be fun.”

While Hadler enjoys having the chance to play music on stage, the creation of these two new shows has a much deeper purpose. The ticket proceeds from Hadler’s shows helps support GUMI Camp USA, a veterans camp run by Hadler in Taney County.

“When I first had moved to Branson, I noticed how patriotic it all was. It was like, this is awesome. Every show recognizes veterans,” said Hadler. “I remembered from the time I was real young wanting to start something that was maybe a healing place for people that had no job or no work. It just felt right, here in Branson, to make it a healing place for veterans. So in 2015, with some help from some veterans and people that weren’t veterans that just love veterans and wanted to help. So we all teamed up together and started building a place called GUMI Camp. It’s on 250 acres. It’s in Taney County here, southeast Taney County. GUMI is spelled G-U-M-I, which stands for Glad You Made It. I want to invite people to go onto gumicampusa.com. That’s why I’m doing these shows in the winter. The proceeds are helping support the camp. That’s the ultimate goal.”

GUMI Camp USA offers a place for veterans struggling with deployment related issues such as PTSD, depression or the inability to readjust to civilian life. At the camp, veterans will have the chance to participate in programs that include peer-to-peer support, specialized groups, chaperoning expeditions, animal therapy and experiencing life on a working ranch.

Hadler added if folks aren’t able to come and see his show, but would still like to support the camp, there are a couple ways they can help.

While Hadler’s two new shows are currently scheduled to come to a season one close at the end of this month, Hadler will continue to perform his long-running show Hank Williams Revisited through the rest of this year. Hadler said the show has been a part of his life for nearly as long as he’s been in Branson.

“I moved to Nashville in ‘92 and was on the Grand Ole Opry and I was performing at Tootsie’s Orchid Lounge,” said Hadler. “There was a gentleman (Jerry Lee) from Branson in Nashville and after I got done singing, he came up to me and says, ‘Hey, we’d love to have you in Branson. Would you like to come to Branson?’ and I said, ‘Sure. Where is it,’” Hadler said with a laugh. “March of 2002 we moved here and started the show in April, a show called Country Traditions. Jerry Lee’s like ‘You do Hank so well, why don’t you just do a Hank Williams show?’ Because I would do Hank in his show. So the following year we started it and did a few dates in December and then in ‘04 we really kicked in.”

Hadler explained that instead of just coming out and singing some Hank Williams songs, his performance is more of a tribute to the country artist.

“I put the suit on and literally become Hank in the first person. So when you see it … I won’t be Tim. People like that because it’s acting for one reason and for another it puts them in that perspective,” said Hadler. “I had the opportunity when I was on the Opry to talk to Grandpa Jones from Hee Haw and Little Jimmie Dickens and they were friends of Hank. So I picked their brains quite a bit about who Hank was, so a lot of the facts I talk about in the show are from that. I share his songs, his hits and maybe some songs you don’t know.”

Joining Hadler on stage for this show is steel guitar player Bob Tuttle. As part of the show, Hadler shares a little known fact about Hank Williams that Hadler said not many folks have heard before.

“Hank had an alter ego called Luke the Drifter and we always throw a Luke the Drifter (song) in there. What had happened was he got signed with MGM and MGM thought all these gospel songs that he had written would taint his career, so they didn’t want to put them out under Hank Williams,” said Hadler. “They said, ‘Can you come up with a fictitious name?’ So he came up with Luke the Drifter and over 40 of his songs are under that name. A lot of people don’t realize it.”

February show times for Hank Williams Revisited are every Sunday to Friday at 3 p.m. in the Little Opry Theatre. Starting on March 3, Hadler’s show will move to Wednesdays at 9:30 a.m. and will be held on stage inside the Elite Theatre.

“It’s been a wonderful ride,” said Hadler. “I love singing and entertaining.”