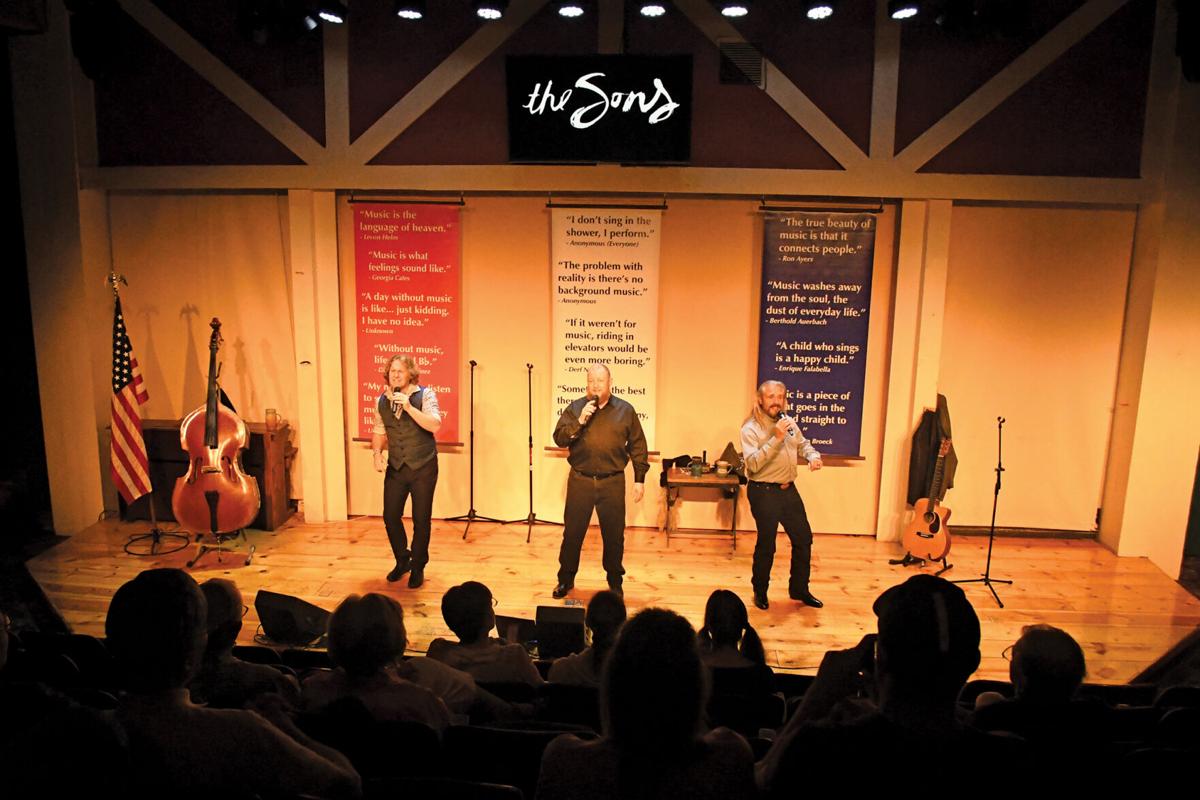 The Sons began performing at their new home, The Little Opry Theatre on May 5, which is inside the Branson Imax. 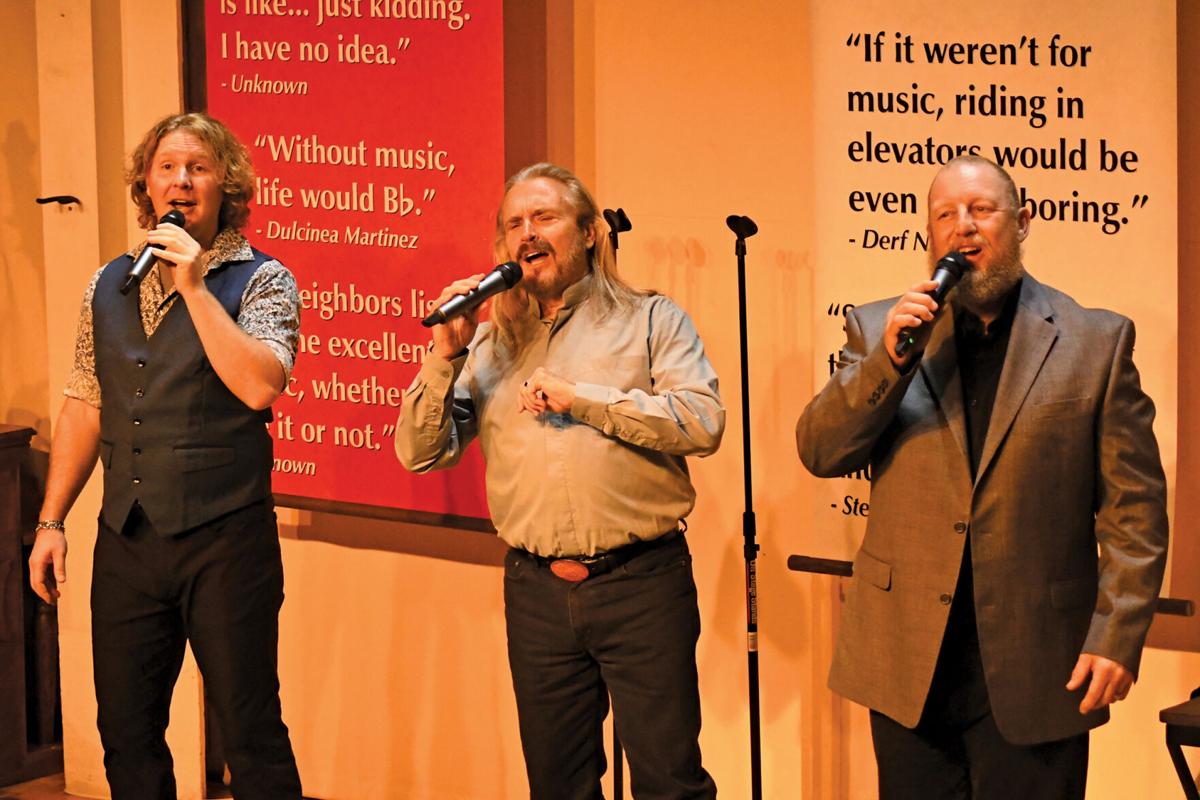 The Sons perform music from The Beatles in the show, with a bluegrass twist, aka Beatlegrass. 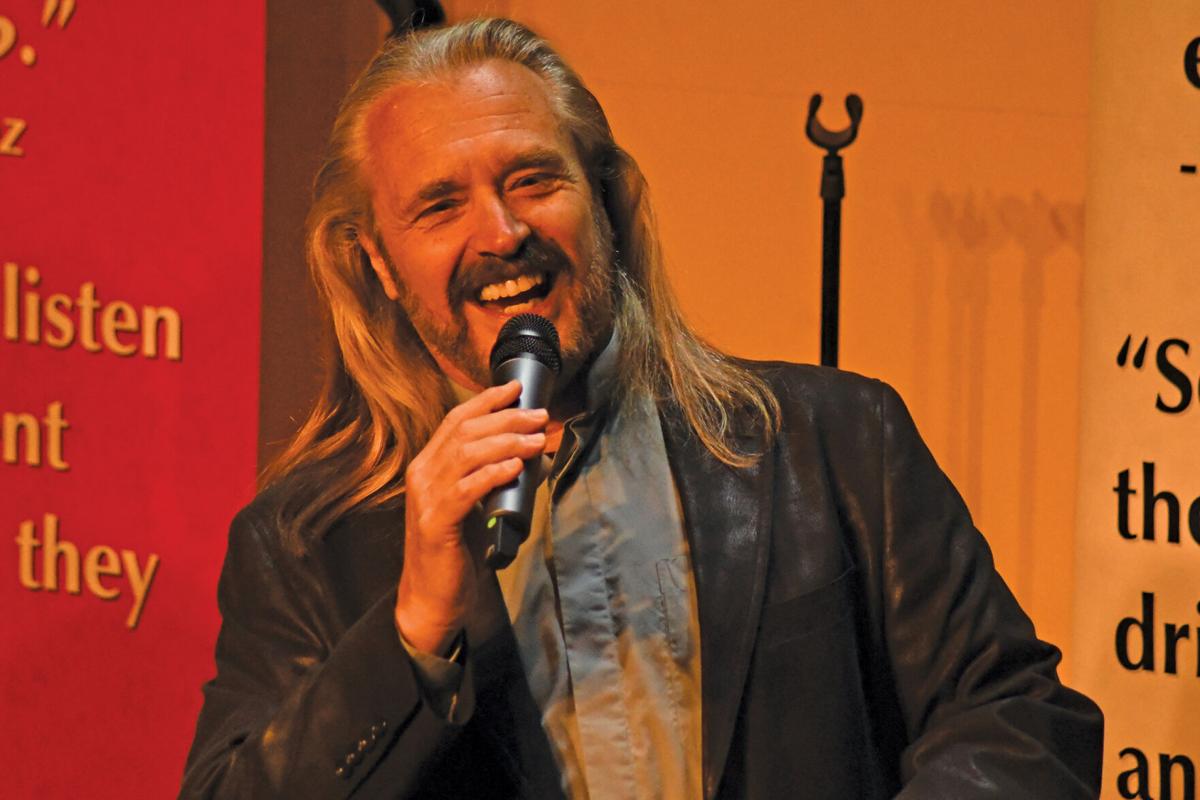 Tom Johnson has been with The Sons since they were founded in 2005 at Silver Dollar City. 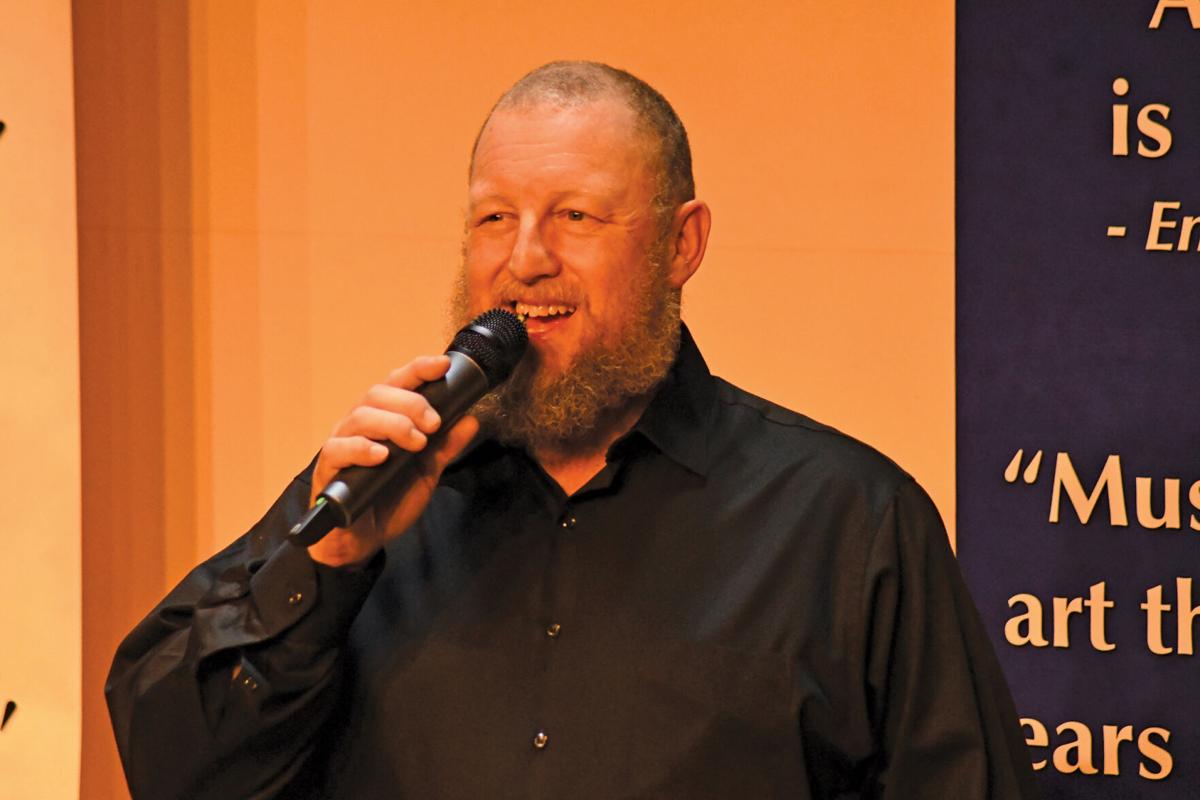 Rich Watson joined The Sons eight years ago and also currently performs with Smoke on the Mountain. 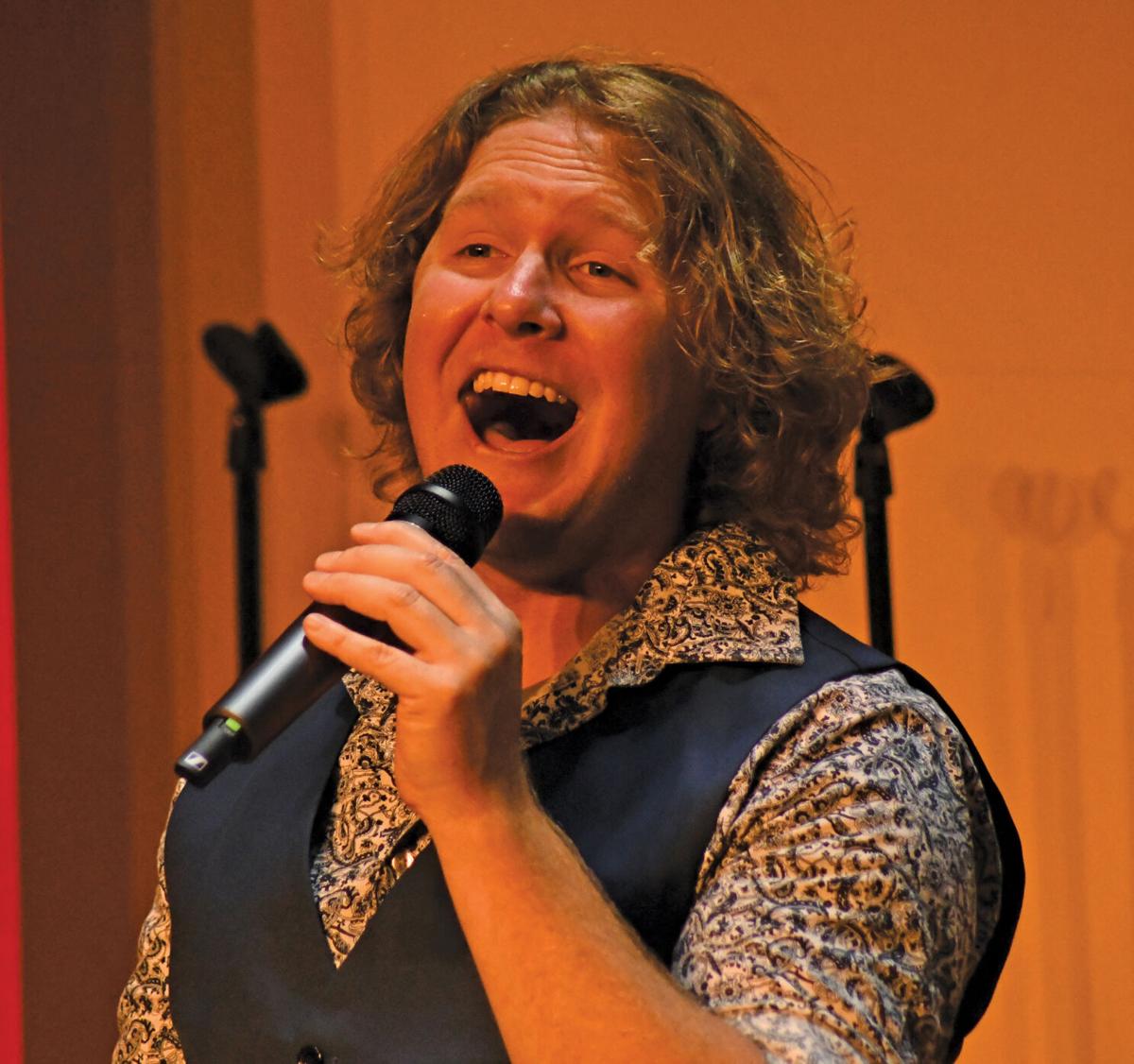 Barry Arwood was invited to join The Sons in 2018. He also performs in the Awesome 80s show in Branson. 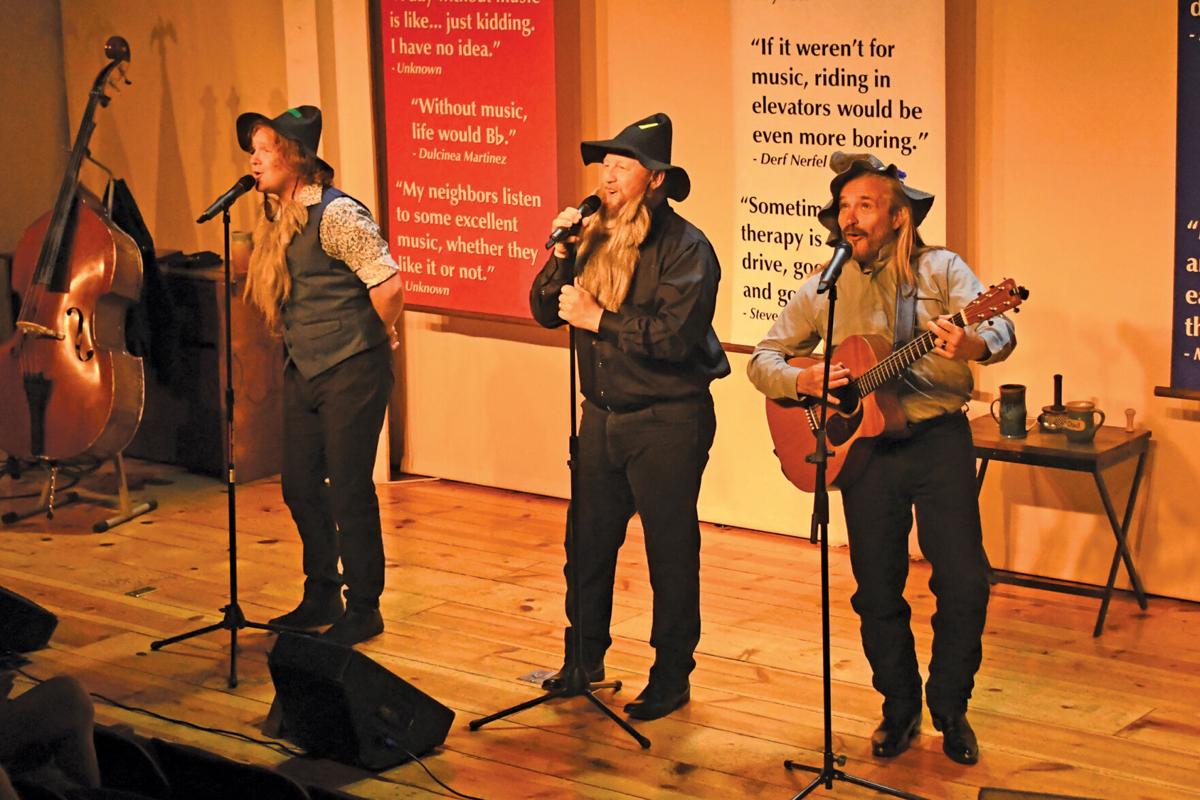 The Sons bring The Soggy Bottom Boys to the stage from the film “O Brother, Where Art Thou?” 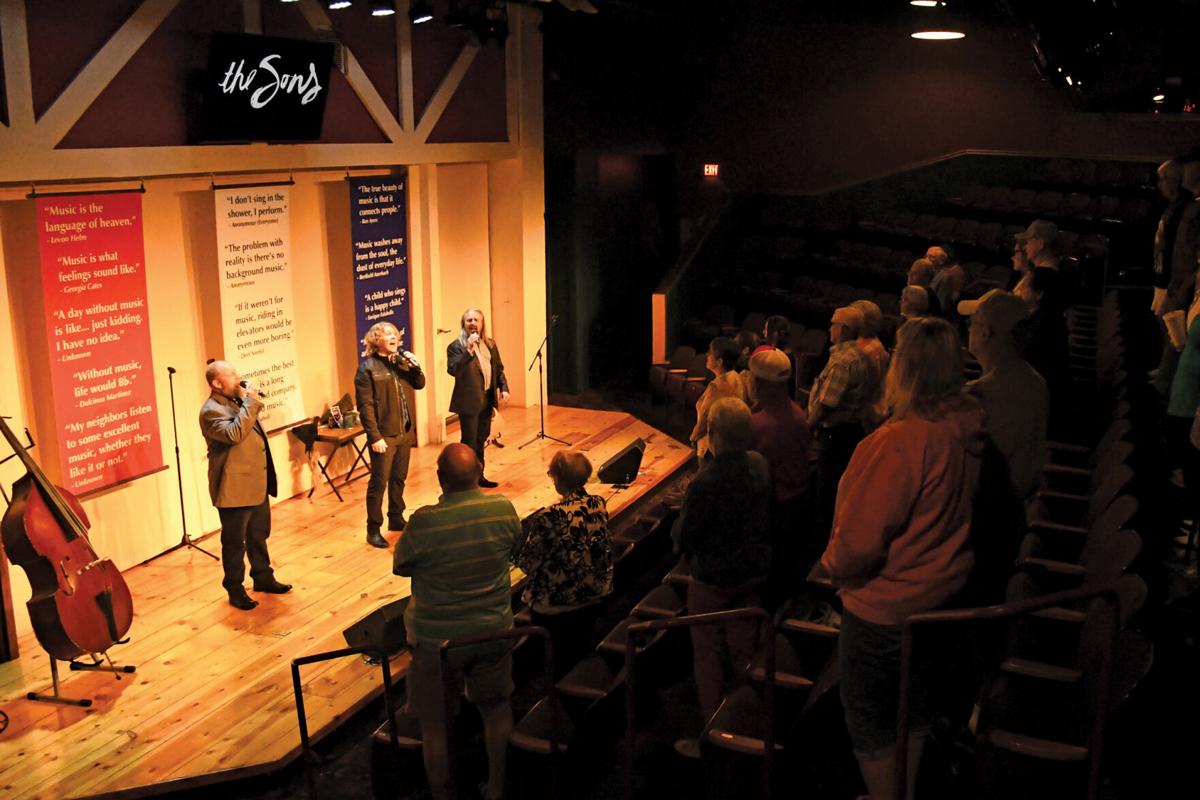 The audience rises from their seats as The Son perform a series of patriotic songs honoring America and veterans.

The Sons began performing at their new home, The Little Opry Theatre on May 5, which is inside the Branson Imax.

The Sons perform music from The Beatles in the show, with a bluegrass twist, aka Beatlegrass.

Tom Johnson has been with The Sons since they were founded in 2005 at Silver Dollar City.

Rich Watson joined The Sons eight years ago and also currently performs with Smoke on the Mountain.

Barry Arwood was invited to join The Sons in 2018. He also performs in the Awesome 80s show in Branson.

The Sons bring The Soggy Bottom Boys to the stage from the film “O Brother, Where Art Thou?”

The audience rises from their seats as The Son perform a series of patriotic songs honoring America and veterans.

After more than a decade and a half of performing in Branson, The Sons Music Celebration has a new home at The Little Opry Theatre.

Featuring the talents of Tom Johnson, Rich Watson and Barry Arwood, The Sons have a strong Branson history, which began at Silver Dollar City 16 years ago.

Located inside the Branson Imax Entertainment Complex, The Little Opry Theatre has welcomed several new shows for the 2021 season. Johnson said when they learned the theatre had an opening, they jumped at the chance.

“Something opened up for the 10 o’clock show here,” Johnson said. “Rich says ‘We’ve got to do work searches for unemployment, so let’s go audition.’ We auctioned and at the end of it they said, ‘When do you want to start?’

“It was an opportunity we had talked about in the past, to have our own show. But to go to a big theater, we didn’t want to peddle ourselves, so this was an opportunity. The theater is awesome. Five rows deep, 200 seats and just the most intimate of opportunities to be able to share our music and do our full concert as opposed to the little concerts we had been doing in the past. When that opened up, all three of us looked at each other and said, ‘Yeah, I think we should.’ We’re taking a chance and having a blast.”

After nailing the audition and receiving their time slot in the theatre, the singing group only had three weeks to get things ready before they took the stage for the first time together at The Little Opry Theatre.

“We did our very first show on May 5. We knew that we had a show on April 20. It was a quick turnaround,” Arwood said. “We get along and we work well together. We got in the studio, we put our heads together and we did what we needed to do. We’ve been having fun ever since. It really hasn’t been an incredibly stressful year. It’s really been a lot of fun.”

During The Sons 80 minute performance, audiences will hear music from a number of different eras and genres.

“It’s a full variety show,” Watson said.  “From the bluegrass music to patriotic, cowboy, country, ‘50s and ‘60s, comedy and a whole variety, and everything they would love to hear and they can sing along to.”

Guests of the show will also be treated to a variety of different music artists, as well as a new, unique kind of bluegrass.

“We do a little bit of John Denver. We do Beach Boys and Beatles, but we do them in a bluegrass style. We call it Beachgrass and Beatlegrass. We do Creedence Clearwater Revival in a bluegrass style,” Arwood said. “We do Chicago. We do comedy songs from the ‘50s and ‘60s. We do The Everly Brothers, The Righteous Brothers and The Statler Brothers. We do The Imperials. We do some classic gospel stuff and we do some little bit newer gospel stuff. We do some country and a little bit of everything. We’ve got a new song. We call it ‘Country Across The Country’ and I think there is five different songs and five different artists from that ‘90s era of country music.”

Though they have a large catalog of songs, the icing on the cake for each of The Sons shows — whether they’re in Branson or on the road touring — has consistently been the performance of one single song.

“The ‘Mississippi Squirrel Revival,’” Johnson said. “It’s our most requested song wherever we go.’

Written and performed by American Country Music Singer Ray Stevens, the ‘Mississippi Squirrel Revival’ was released in 1984. Fast forward to today and The Sons are unable to go anywhere without being asked to sing about the day a squirrel went berserk in the First Self-Righteous Church in Pascagoula, Mississippi.

“When we go on tour, we pull into the parking lot,” Arwood said. “If the pastor is there waiting for us — there have been times we haven’t even open the car doors, the car is still running and we have rolled down the window to ask where we should park — and they’ll go, ‘Just park around the back and you’re going to do the squirrel song, right?’ It’s always the first thing people want to know.”

As The Sons have begun to establish momentum with their new show, Arwood said they’re preparing to take their production to the next level.

“Right now we’re doing one show. Now that we’ve kind of gotten our feet on the ground, we’re getting ready to change things up. We’re going to end up doing two completely different shows, so the people can get some more variety,” Arwood said. “We have 200 plus minutes of music and that was the hardest part. The first time we went through and were like, ‘Let’s do this, this and this.’ We were still at 115 minutes and we still had to cut six or seven more songs.”

Once the new second show has been created, The Sons will also be taking another step to evolve their production by making one of their weekly performances a complete gospel show. Before they begin the gospel only show, Arwood said they’re focused on creating their Christmas show, which is just around the corner.

“Our Christmas show will probably be a lot of Christmas music, but it will also be a lot of gospel as well,” Arwood said. “Those two, they go hand-in-hand. It’s hard to celebrate the birth of Christ without singing gospel music.”

In their current show, The Sons do include the song “Mary, Did You Know” as part of their music line-up. While the song has traditionally been tied to Christmas time, Johnson explained what led them to keep the song a part of their show year-round.

“Last year was the first year we did the Christmas show at Silver Dollar City. We felt like it was going to be one of the more powerful songs,” Johnson said. “Our supervisor out there … said, ‘Guys after all these years, this is my favorite song for not only your harmony, but the message of the song is so good.’ But really it’s not just a Christmas song. When you think about it, yeah it references Mary, but it talks about Jesus’ whole ministry. It just brings this whole message to the audience.”

For the flow of the show, the trio has not only made sure to include a variety of music genres, but they’ve taken the time to feature a steady mixture of both upbeat and slower song selections.

Though they’re only in their first season at The Little Opry Theatre, The Sons are already going to be adding new showtimes in the coming months, to give audiences even more opportunities to take in a show.

“Through the summer and up through Labor Day, it’s going to be Monday, Wednesday, Friday at 10 a.m.” Watson said. “Then from that point on, through Christmas, we will be Tuesday through Saturday at 10 a.m. We’re excited about that.”

Johnson is the only founding member of The Sons to still be with the group. After moving to the area in 1988, Johnson got his start in Branson entertainment in 1993 performing alongside Rudy Gatlin of The Gatlin Brothers in a production of “Oklahoma.” In 1996, he joined the cast of the original production of The Promise. In 2001 he began his journey with Silver Dollar City, which led to roles in shows including For The Glory, Charles Dickens “A Christmas Carol” and then The Sons in 2005.

Watson is celebrating his 15th season in Branson. He got into the Branson entertainment scene with a role in the second production of The Promise. Watson is currently in his 13th season with Smoke on the Mountain, another Little Opry Theatre show. Then eight years ago, Watson went to Silver Dollar City where he joined The Sons.

Newest to the group, Arwood has been a member of The Sons since landing the position in 2018. He began his Branson entertainment journey four years ago with a role in Smoke on the Mountain. Alongside his time with The Sons, Arwood also performs in the show Awesome 80s at The Americana Theatre and occasionally performs in the shows New Jersey Nights and Dancing Queen at The King’s Castle Theatre.

For additional information about The Sons show, ticket reservations and a look at the full schedule, visit bransonimax.com/opry or visit their new page on Facebook ‘The Sons Branson.’