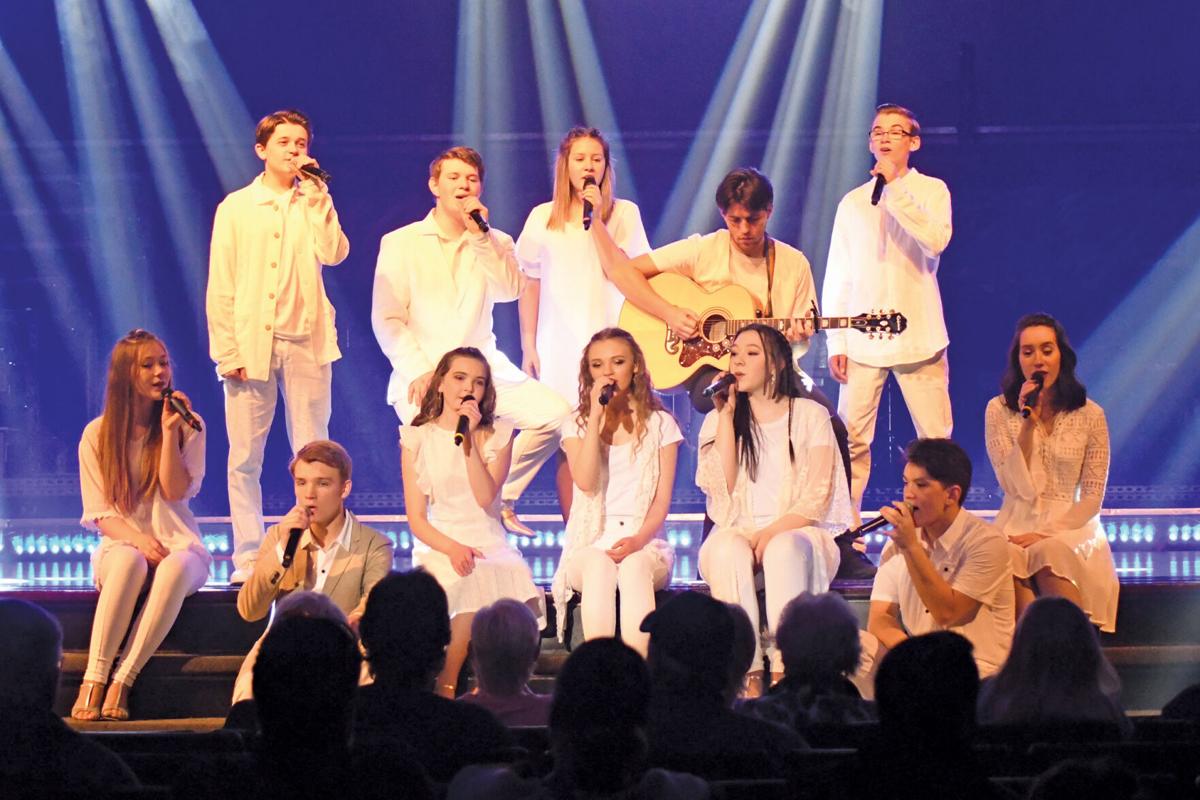 For one of the final songs of the show, the Hughes cousins gather around the stage staircase to perform. 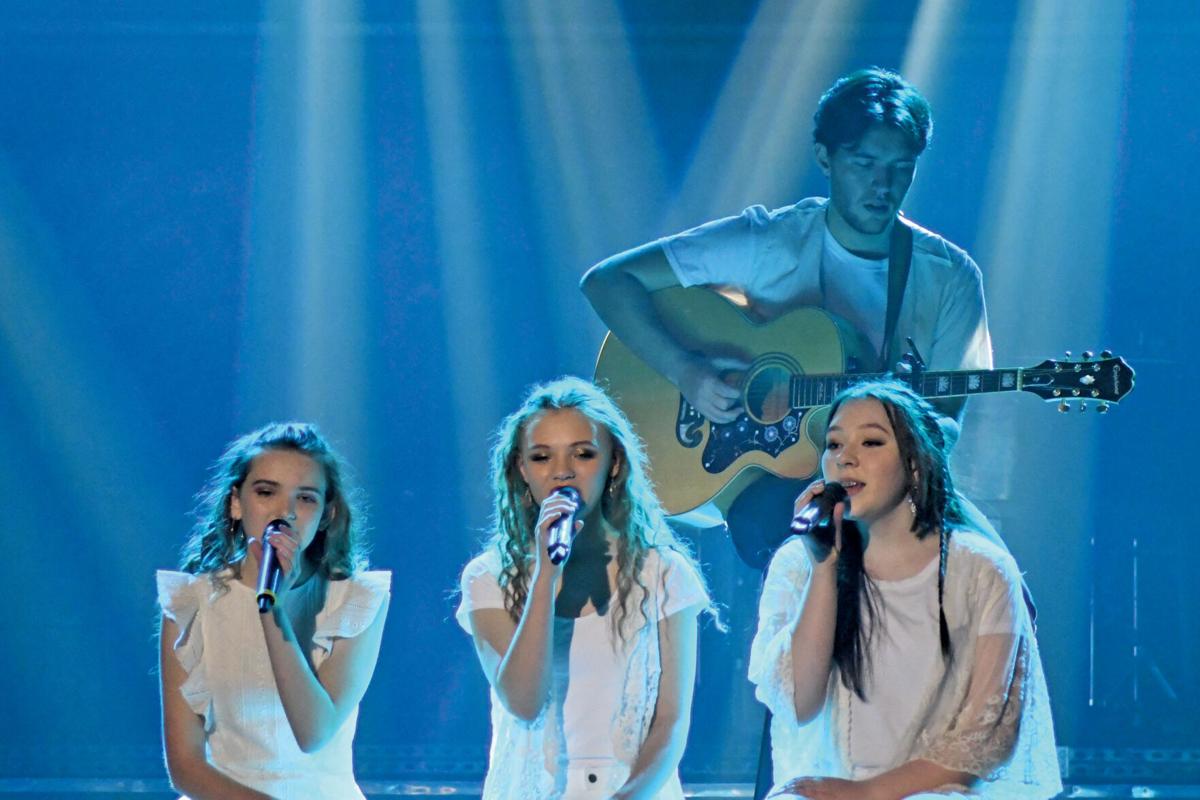 With Jacob Hughes on the guitar behind them, three of the Hughes girls sing together in the show. 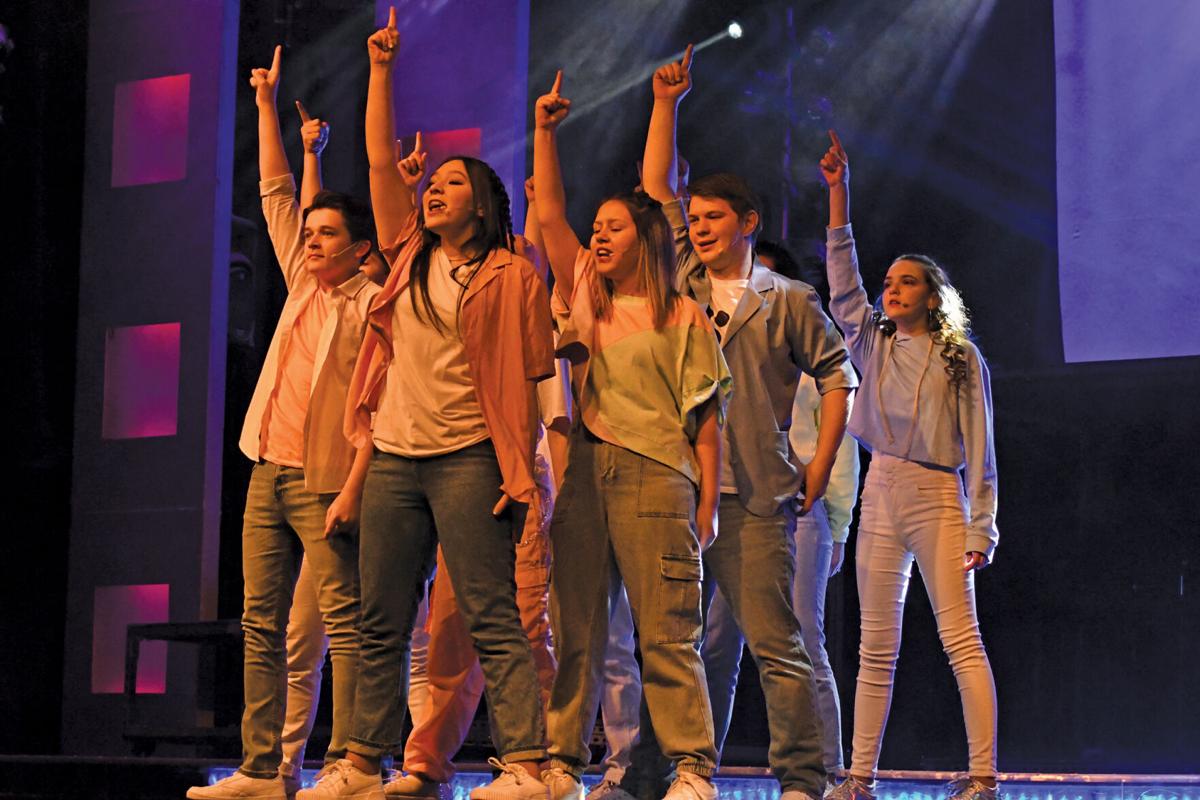 Re-Vibe features a variety of music genres, from several eras.

For one of the final songs of the show, the Hughes cousins gather around the stage staircase to perform.

With Jacob Hughes on the guitar behind them, three of the Hughes girls sing together in the show.

Re-Vibe features a variety of music genres, from several eras.

The second generation of the Hughes family is taking over the stage at the Hughes Brothers Theatre with the debut of their brand new show, Re-Vibe.

Since the end of March, the Hughes cousins have combined their own individualistic vocal, instrumental and dancing talents to perform the biggest musical hits to a new generation of audiences.

“Re-Vibe is our take on older songs like classic rock ’n’ roll, like ‘50s doo-wop, and stuff like that, and then putting a twist on it,” Performer Benjamin Hughes said. “It’s just what we love to sing and dance to, and it’s just our take.”

In addition to rock ’n’ roll and doo-wop music, audiences will also be treated to R&B, pop, alternative, jazz, country and more from a variety of different eras. Performer Kaitlyn Hughes said one of their goals of Re-Vibe is to help breathe new life into some of the older songs.

“It’s good ole-fashion music. We joke around and say we’re taking the old music and making it cool again,” Kaitlyn said. “Not that it wasn’t already cool, but we’re getting back in so people can listen to it. It’s pretty fun.”

Benjamin said they first started discussing the idea of bringing a cousins-only show to the Hughes Brothers Theatre back in 2018, but it wasn’t until 2020 that the pieces began to fall into place.

“It was a long process. We knew we wanted to do a show with just the teens. The five Hughes brothers, they’ve done so many shows in Branson … so we want to put our hearts and souls on the stage and take over for them someday,” Benjamin said. “We went into production, and Jason, he’s the director of The Hughes Music Show, and all of us teens sat down with him. He was like, ‘Okay, this is your baby. I want you guys to do with it what you want.’ We all gathered together and put our song ideas, the classic songs that we like to do and classic songs that everybody loves.”

However, due to the pandemic and their commitments to other shows in 2020, the group of cousins had to stop production on their own show a few times.

“With the other shows in our theater and rehearsals and getting ready for Christmas season and everything, it was super hectic and crazy,” Kaitlyn said. “We had to pause (production) every few weeks, or days would be busy, because people wouldn’t be feeling good in the show, so we’d have to work them out or whatever. It’s been off and on, off and on, but then we pushed it really hard at the end of last year.”

In the new year, the cousins pushed themselves even harder and even camped out in the theater for a week to work on their new show.

When it came time to select a name for the show, Benjamin explained that it actually wasn’t an easy decision.

“I was like, ‘I want the audience to have a good vibe.’ Vibe is kind of a thing with the younger generation,” Benjamin said. “So we were like, ‘How are we going to make that into a brand and into the name of the show?’ And Re-Vibe just came to us.”

While Re-Vibe did join their list of several other names, it didn’t become the top contender until the young performers took an innovative approach toward selecting the best name.

“We were in a meeting to name the show. Every single name we were trying to figure out for the show just did not sound great. It didn’t work. One of the guys on our team was like, ‘I’m just going to call random numbers and ask them what they think of this name,’” Kaitlyn said. “We did Re-Vibe and it just worked and we went with it.”

As there are a dozen cousins performing in the show, they eventually knew they’d eventually have to appoint a director for the show to help make the big decisions.

“This is funny because Jason, who is our theater director, and our other producer Reggie, they were kind of doing other things, so they really couldn’t focus on this,” Benjamin said. “They were like, ‘We just need someone to nail it in the butt and make the decisions.’ I was like, ‘It can’t be me’ and then all the kids were like, ‘It’s got to be Benjamin.’”

While he didn’t think he was up for the task at first, Benjamin said it didn’t take long before he became comfortable taking charge.

“Eventually we got to a point where I was making all the decisions and I was saying, ‘This song can’t be in it or this song has to be in it.’ The rock medley that we do, it was a little longer,” he said. “There were a couple songs we were going to do like ‘Jump’ and we were thinking about a couple others, but I was like, ‘This is going to fit the medley best.’ I cut it and I was like, ‘I want this song, this song and this song’ and I was the decision maker for that.”

While Benjamin was named director, Kaitlyn said creating the show was still a team effort.

“It’s a group process for the most part, but when it’s split, and we can’t decide, because some people want this and then some people want that, we just go, ‘Benjamin, what’s happening?’ And he decides and that’s where it goes,” Kaitlyn said. “You have to have a level of who has the last say or else things just get hard to get done; especially in a family business where we all love each other.”

Benjamin also stressed during the show that what the audiences are seeing on stage are the results of a lot of hard work and dedication from the cousins.

“We have the leadership of mainly two people, Jason and Reggie, but this whole show is really just the kids producing this show. We have a little help from the adults,” Benjamin said. “People think maybe a Las Vegas producer comes in and does stuff for us, but no it’s really just the kids. The kids are really putting their hands in it. It is our baby and we’re treating it like our child and doing what we want with it.”

Showtimes for Re-Vibe are 2 p.m. on Wednesdays and 8 p.m. on Saturdays. Guests of the 8 p.m. show also have the add-on option of enjoying a chef-prepared dinner in the theater ahead of the show.

For additional information, to look at the full 2021 show calendar or to make ticket reservations visit hughes-brothers.com/re-vibe.