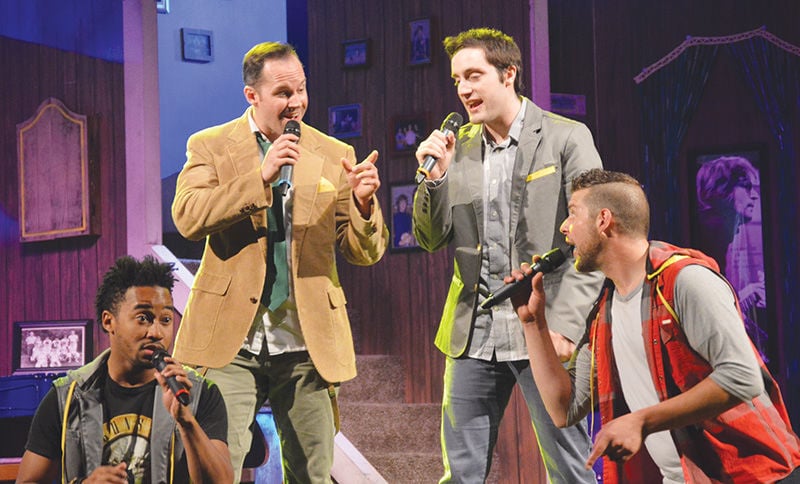 Avilla Martin, from left, Brad Baker, Aaron Mor and Justin Sassanella, as well as the rest of the “Forever Young” cast will open at the Americana Theatre Thursday night. 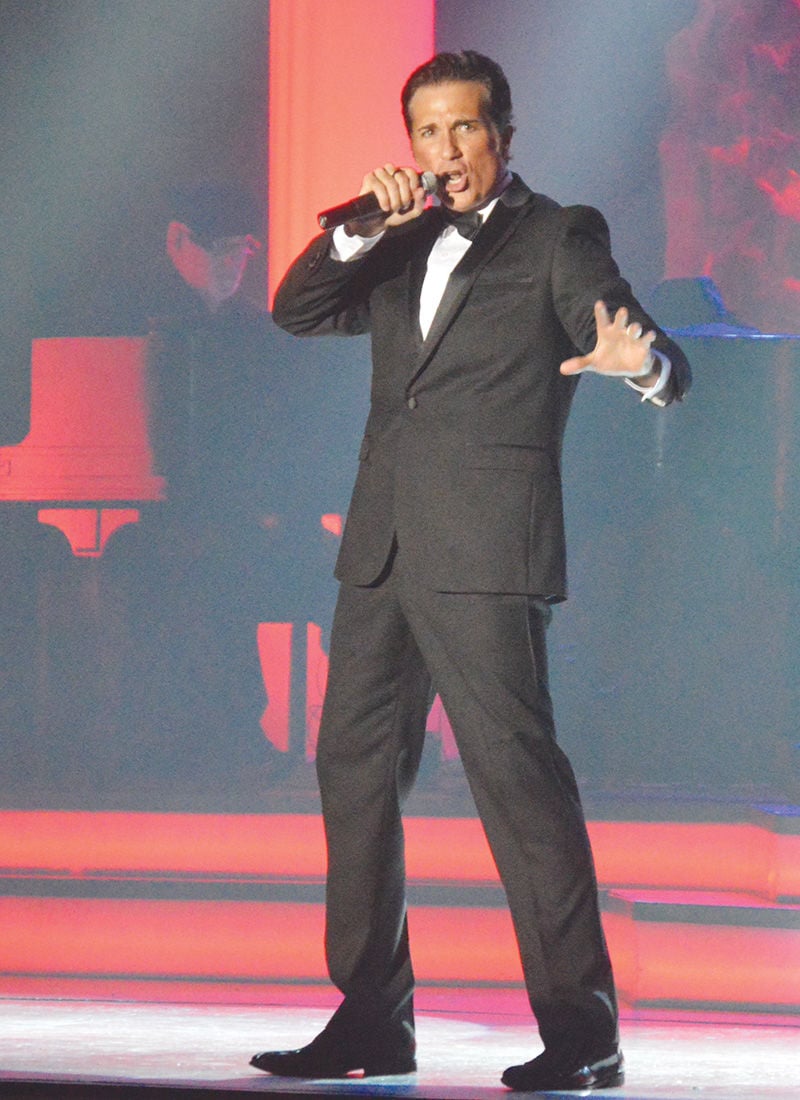 George Dyer will open in his new digs at the Americana Theatre Wednesday night. 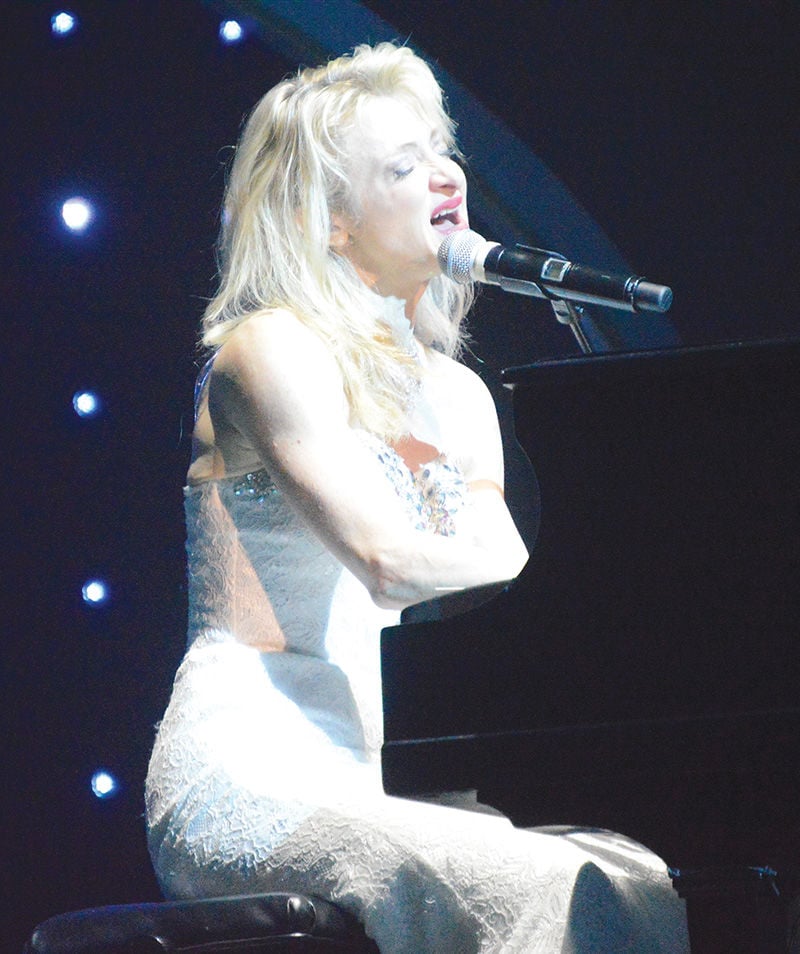 Janice Martin will host her own show at the Americana Theatre next season.

Avilla Martin, from left, Brad Baker, Aaron Mor and Justin Sassanella, as well as the rest of the “Forever Young” cast will open at the Americana Theatre Thursday night.

George Dyer will open in his new digs at the Americana Theatre Wednesday night.

Janice Martin will host her own show at the Americana Theatre next season.

Even though 2016 is almost in the books, the “Branson Shuffle” keeps going strong. Last week the Branson tri-Lakes News reported “Classic Country’s Patsy Cline & Friends” would be staying put at the Americana Theatre. The venue will be under the management of Chris and C.J. Newsom.

“We are so excited to be leasing the Americana Theatre for 2017,” Chris Newsom said. “And what a great line-up of shows we have in store.”

Dyer, a professional opera singer who loves a wide array of music, sings a variety of musical genres including power ballads, Broadway hits, love songs, classic standards, golden oldies, gospel, and more. The show also features his wife, Clarisse, as well as his children, who add a whole other dimension to the show. The show was at the Mickey Gilley Theatre this season.

“Forever Young,” an original show written, starring and produced by a handful of local entertainers, centers on five friends as they take guests back to the moment they discovered what it meant to “tune in to the music.” Set in a suburban basement, the show tells the story of best friends reconnecting and rediscovering that music can truly change and shape one’s life. The show called the Hughes Brothers Theatre home this season.

Janice Martin has been a headliner aboard the Showboat Branson Belle for the past six seasons, in addition to headlining her own shows and performances all over the world. Martin’s show is sure to include many of her signature talents, featuring soprano vocals, piano and violin performances, along with flying acrobatics.

According to Newsom, 2017 showtimes for “Classic Country’s Patsy Cline & Friends” are set for 7:30 p.m. Tuesday, Thursday, Sunday nights. “The George Dyer Show” will take the 7:30 p.m. slots every Wednesday and Saturday, with select 10 a.m. and 2 p.m. shows throughout the season. The 7:30 p.m. slot Monday and Friday will be filled by “Forever Young,” who will also perform at 2 p.m. every Wednesday and Sunday. Martin’s new show is set for 2 p.m. every Monday, Tuesday and Saturday.

After 18 seasons as one of Branson’s most popular and successful shows, the Bretts announced they will undergo a schedule change for next season, shifting its Branson performance schedule to September through December in 2017.

Even though “The Bretts” show won’t return until the fall, that doesn’t mean there won’t be members of the family performing in Branson next season. A show starring Prince Ivan, a band featuring Garon and Brydon Brett and Aaron Ellsworth, will perform in Branson and tour during the spring and summer months at Dick Clark’s American Bandstand Theater.

Speaking of Dick Clark’s American Bandstand Theater, the venue will also host a limited run of “Menopause: The Musical” in 2017.

“Legends In Concert” in Branson and GFour Productions, winners of 54 Drama Desk and 44 Tony Awards, are bringing the international hit show to Branson for six performances, May 18-21, 2017.

“Menopause The Musical” has been called a “groundbreaking celebration” of women who are on the brink of, in the middle of, or have survived “The Change.”

“Menopause The Musical” now in its 14th year of production, is the longest-running scripted production in Las Vegas, and continues to entertain hundreds nightly at Harrah’s Las Vegas Casino.

The Starlite Theatre announced “Ayo featuring Voices of Glory,” starring Michael, Nadia and Avery Cole, will call the venue home next season. The siblings first started singing together in 2007 after their mother, Felicia, was in a head-on car collision with a drunken driver.

They began performing at nursing homes and on other floors in the hospital and shortly after their mother emerged from her coma, they were picked to perform on “America’s Got Talent.” Their stint on the show gave the Cole family their first taste of national fame as they became Top 5 finalists.

They have been headlining the “Ayo featuring Voices of Glory” for the past four seasons.

Speaking of the Starlite Theatre, that venue will host a full run of “Raiding The Country Vault,” as well as a limited run of “Raiding the Rock Vault” next season. The venue will still be home to the Texas Tenors, “Buckets ‘n’ Boards,” the BootDaddy Concert series, and “Larry’s Country Diner Live.”

The Blackwood name dates back more 75 years, starting with the Blackwood Brothers Quartet in 1934 with James, Roy, Doyle and Roy’s son R.W. Blackwood, Sr. Today, the Blackwood family legacy is carried on today by R.W. Blackwood Jr. and his wife Donna. The Blackwoods will open their season at the Dutton Family Theater Feb. 9, 2017. They will finish up their 2016 run at the Starlite Theatre Saturday at 10 a.m.

Representatives from the Jim Stafford Theatre announced the Grammy-winner Billy Dean would bringing his more than 20 hits, including 11 Top 10 Billboard hits, four Gold albums and several awards to the venue for the 2017 season.

Throughout his 25-year career, Dean amassed 11 Top 10 hits on the Billboard charts, including “Only Here For A Little While,” “Only the Wind,” “Somewhere In My Broken Heart,” “Tryin’ to Hide a Fire in the Dark” and his signature tune, “Billy The Kid.” Dean also has four Gold albums, more than 20 hit singles on the Billboard country charts and several awards, including a Grammy.

Dean is set to open at the Jim Stafford Theatre in April. Also calling the venue home next season will be “Rock and Roll Revival,” and “The Magic & Comedy of Taylor Reed,” both of which will return in March. Jim Stafford is slated to be back for fall dates in 2017.

Also joining the “Shuffle” are “Abba Tribute: Thank You for the Music,” and “Beach Boys California Dreamin,” two Pullen Productions, a Las Vegas based entertainment company, who will call the Hamners’ Variety Theater home in 2017.

Both productions have spent the last four season at the God and Country Theatres. Both shows are scheduled to open in March 2017, and will run through December.

According to the release, both productions will feature new set design, costumes, lighting, and conceptual re-imaginings for the 2017 season.

“Abba Tribute: Thank You for the Music,” is a tribute to the Swedish pop super-group Abba, featuring signature harmonies, high- energy dance, and huge hits like “Dancing Queen,” “Waterloo,” “Take a Chance on

The “Beach Boys California Dreamin,’” takes audiences on a musical journey to the West Coast beaches of the 1960s with hits from the Beach Boys and many other classic songs.

“We hate to move, and I’m the first person to say I don’t want to move unless it makes sense, and this makes sense for us,” said Matt Muhoberac, the show’s co-owner, co-producer and one of its stars. “It has been a great experience here (at the Americana Theatre), and it has allowed us to expand (the show) to the point where we want to continue to expand, and Clay’s is a perfect location to do that. We’re planning on adding another band member and more production, as well as an upgrade in lights, sound and video capability.

“I can’t wait to take advantage of all that.”

The show “Six” is leaving the Mickey Gilley Theatre for the Hughes Brothers Theatre in 2017.

A staple of the Branson entertainment scene for nearly a decade, the brothers “Six” have been singing a cappela for more than 40 years, performing everything from classic rock, gospel and even some contemporary hits, to timeless classical and show tunes.

“Six” will be joining a lineup at the theater, which is set to feature “It” starring the Hughes Brothers and their families will also be performing at the Hughes Brothers Theatre. The two shows will alternate between the 2 and 8 p.m. timeslots, Monday through Saturday all year.

At Grand Country, Tonya and Tammy Bilyeu will perform a new gospel show at 2 p.m., and a country-variety show at 7 p.m. on Sundays next season.

“We’re excited to announce that Tonya and Tammy, The Bilyeus, will be taking over our 2017 Sunday shows,” producer Mike Patrick said. “Both ladies grew up performing with their family, Branson’s founding show, ‘The Baldknobbers Jamboree.’”

To keep up with the “Branson Shuffle” throughout the winter months, keep reading Branson Tri-Lakes News, Branson This Weekend, or visit bransontrilakesnews.com.