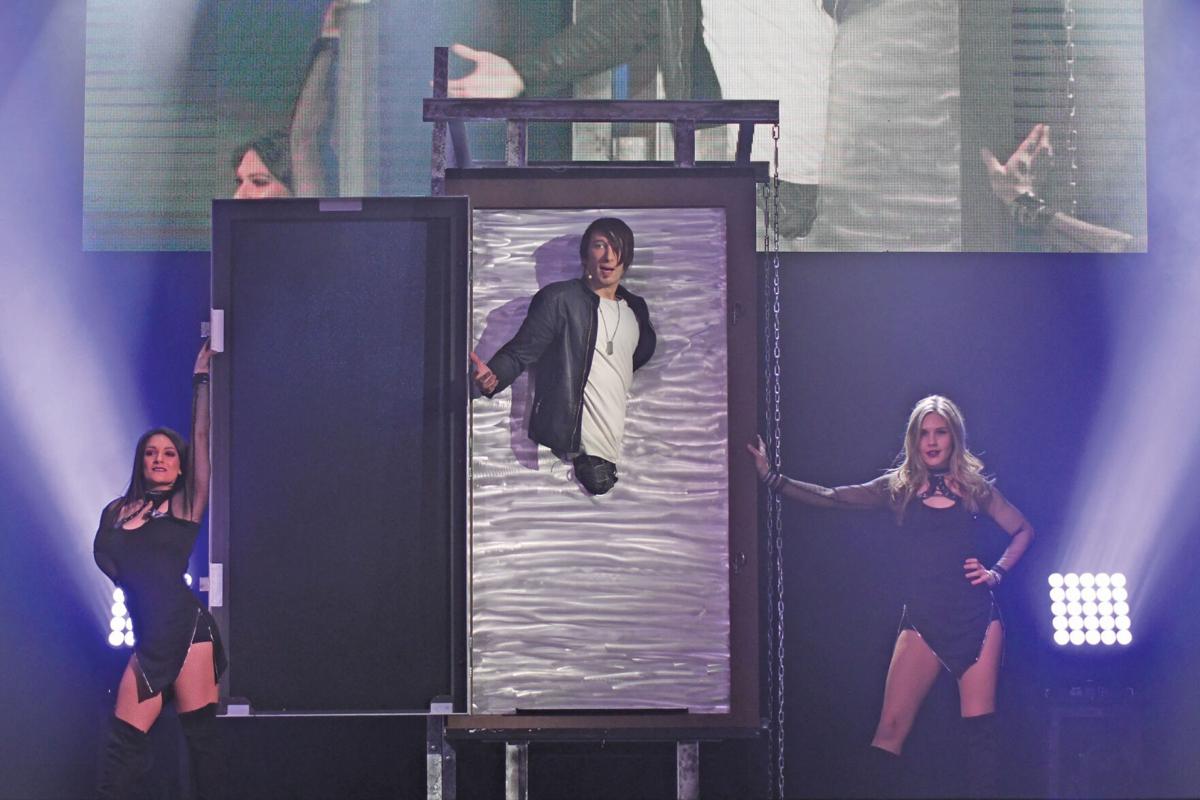 Reza makes his way through a metal wall with the assistance of Samantha Feller and Christa Kempnitz. 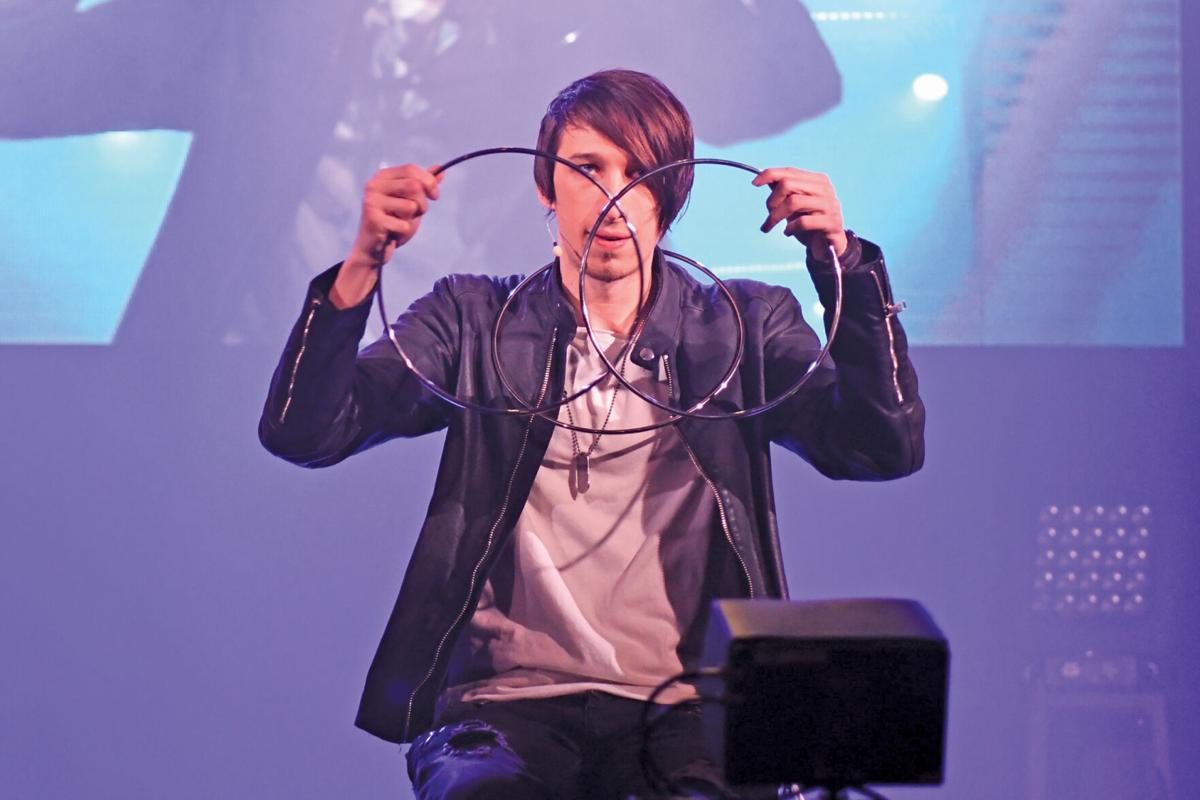 While sitting on the edge of the stage, Reza tells the audience the story of how he was inspired to become an illusionist. 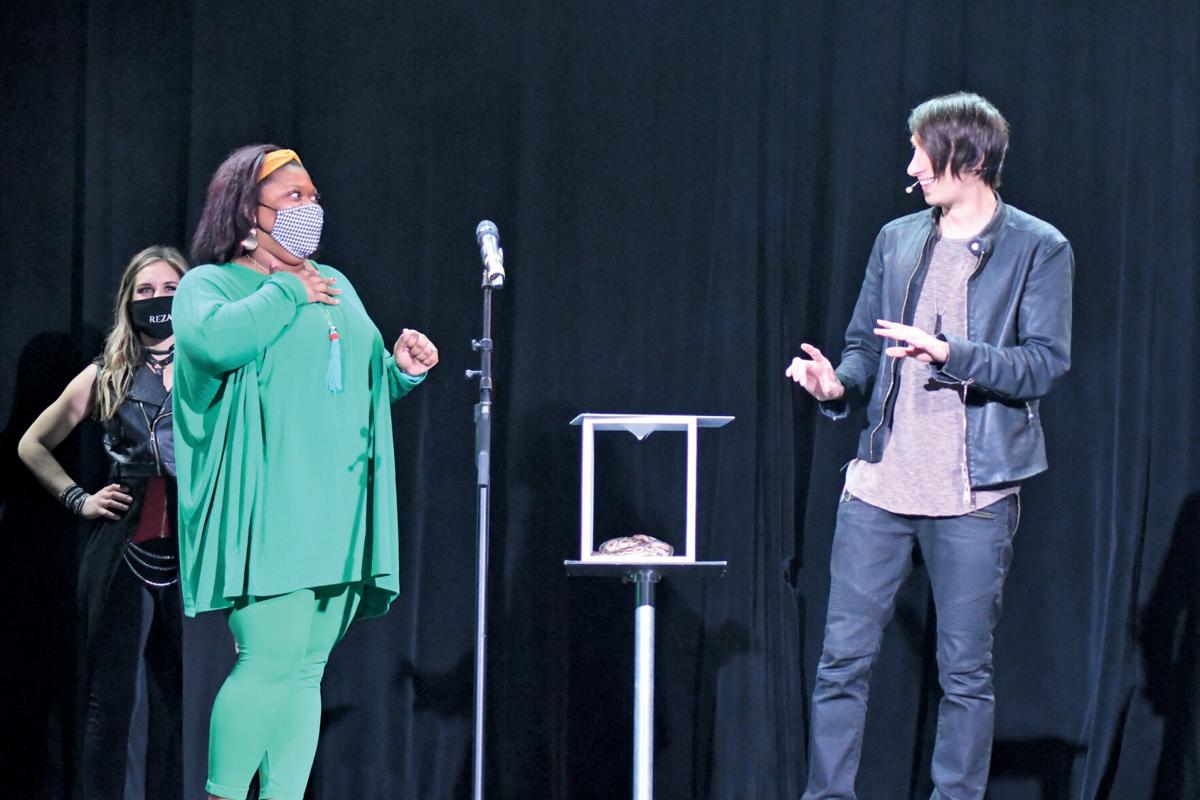 An audience member showcases her surprise at the end of a trick after Reza makes the big reveal. 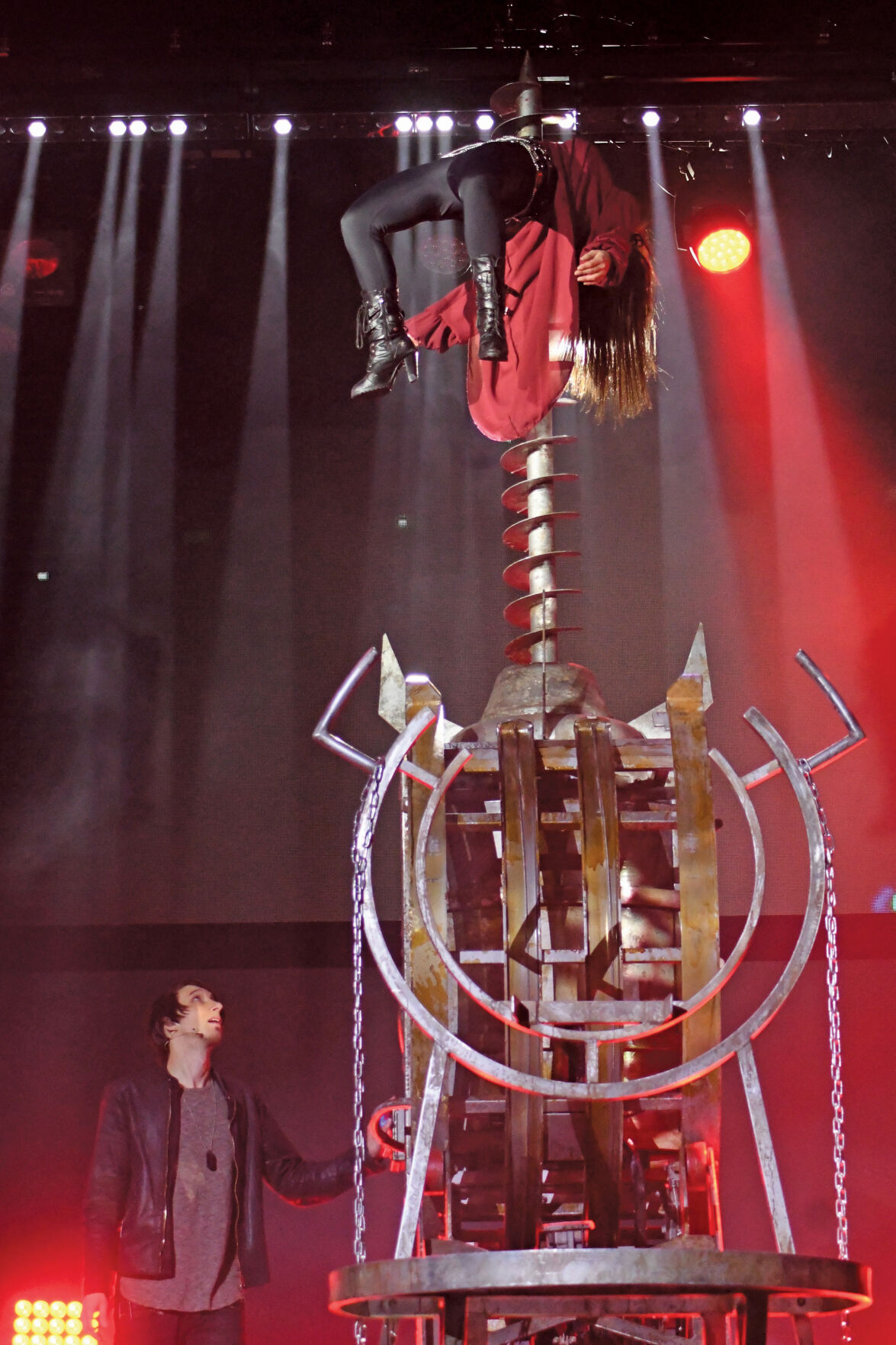 Impaled by a giant drill, Reza spins Assistant Samantha Feller around for the audience to see all angles of the illusion. 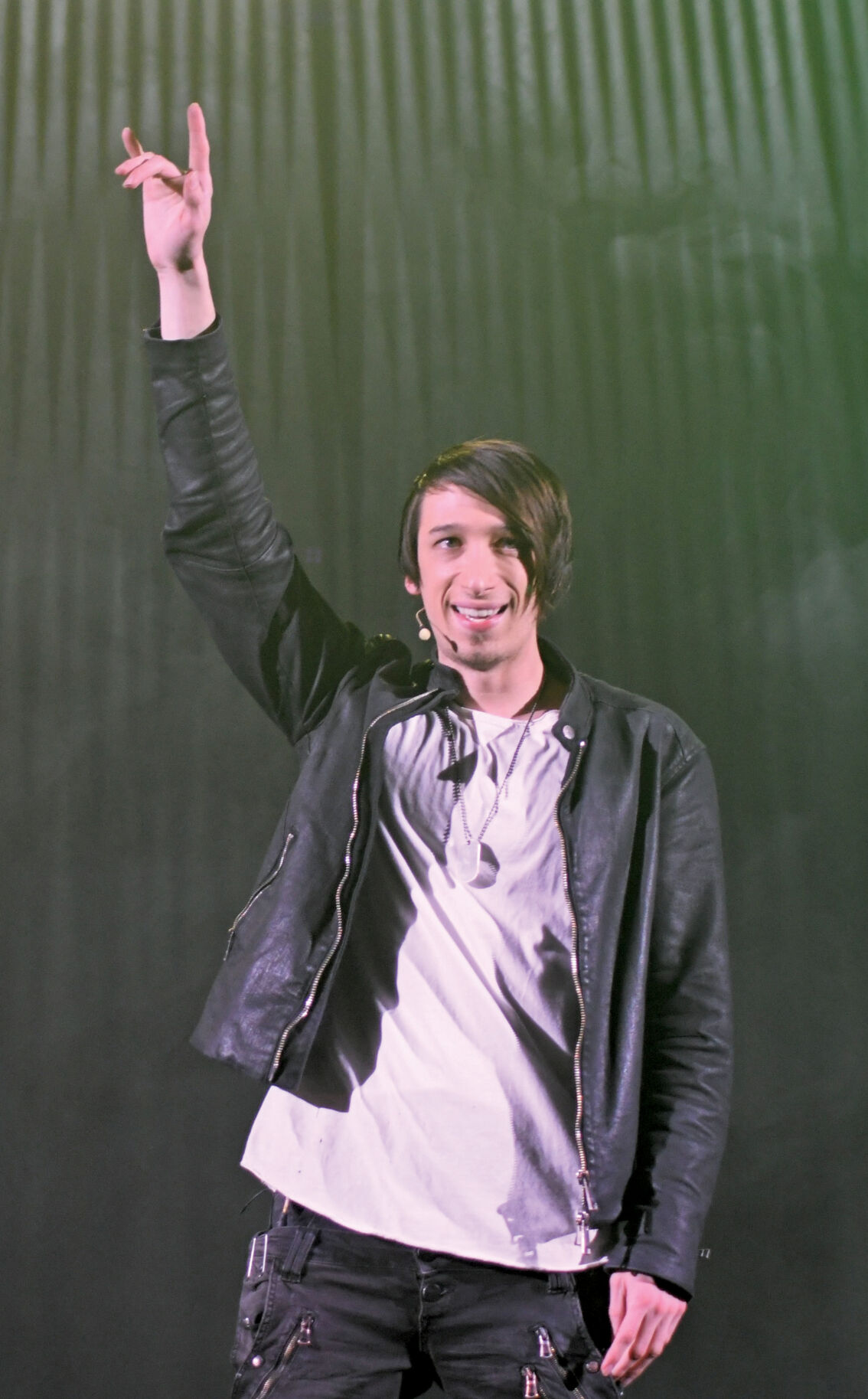 Reza Edge of Illusion has opened for the 2021 Branson show season at the Branson Famous Theatre. 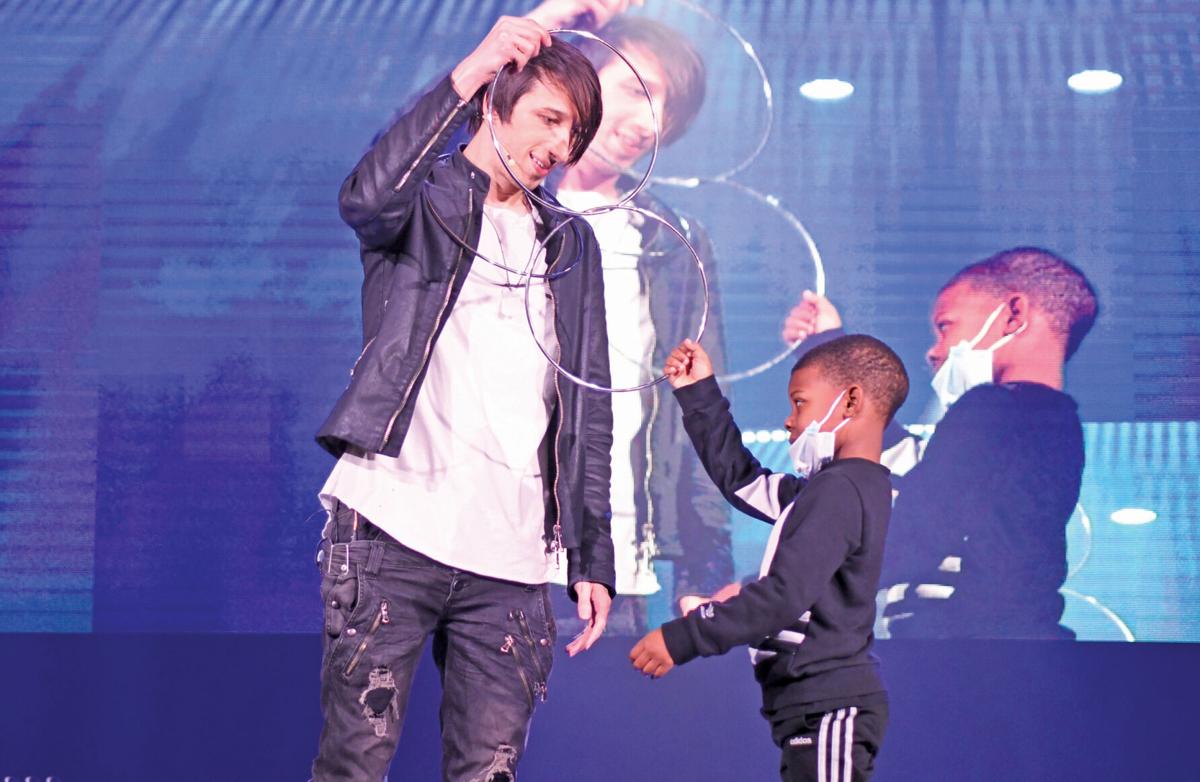 With the assistance of a young audience member, Reza performs one of the first tricks he learned as a child. 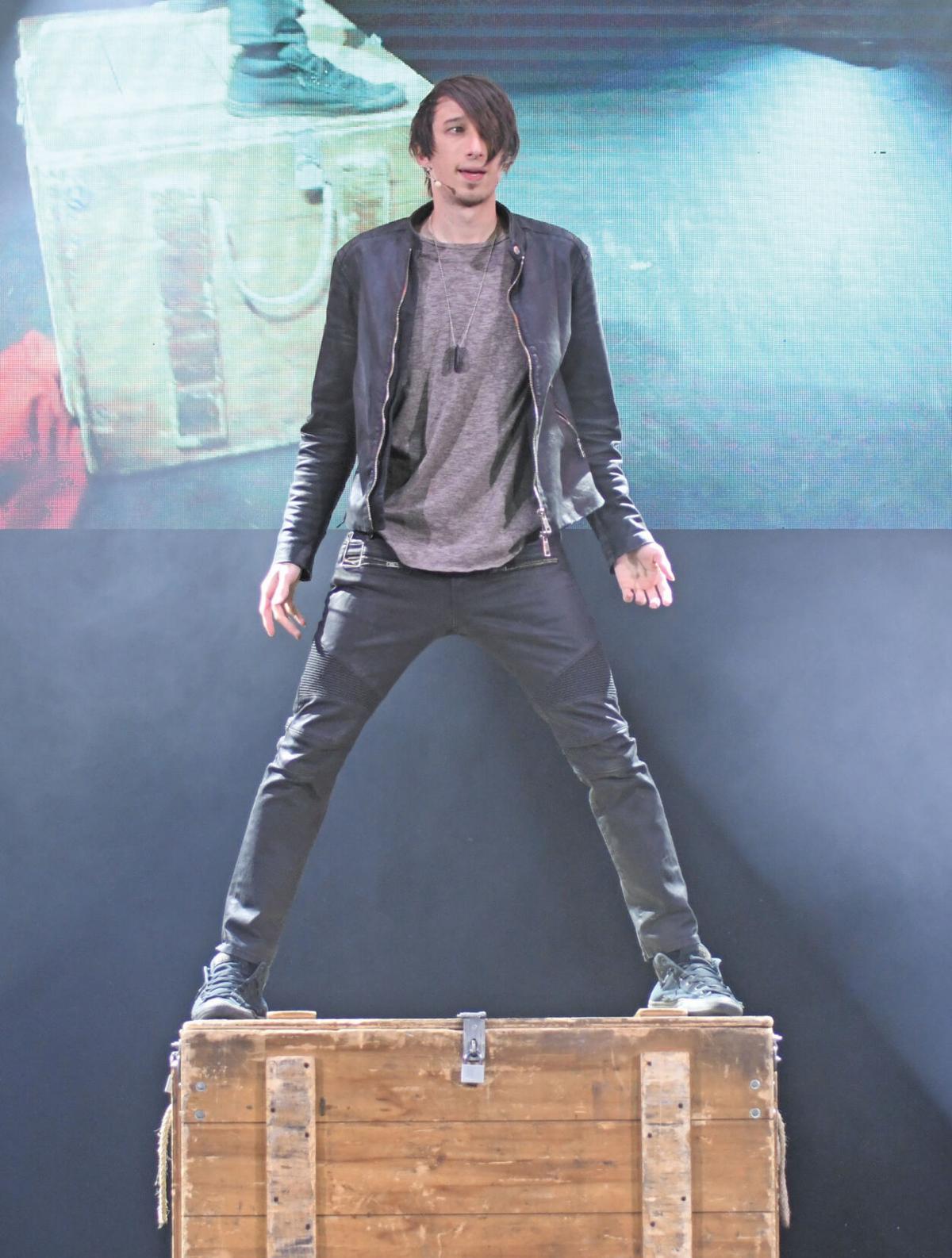 Reza poses at the end of an illusion after surprising the audience by reappearing on stage. 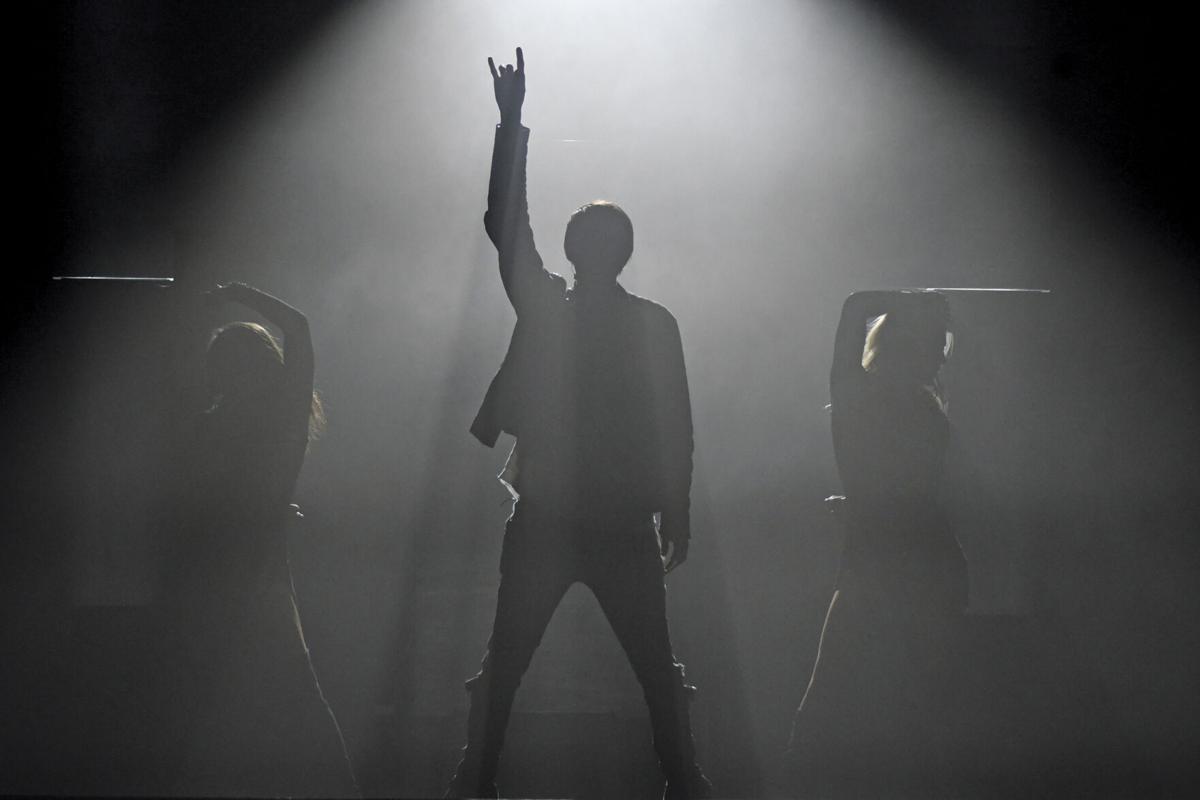 As the lights fade to black, Samantha Feller, Reza and Christa Kemnitz pose at the conclusion of a stunt.

Reza makes his way through a metal wall with the assistance of Samantha Feller and Christa Kempnitz.

While sitting on the edge of the stage, Reza tells the audience the story of how he was inspired to become an illusionist.

An audience member showcases her surprise at the end of a trick after Reza makes the big reveal.

Impaled by a giant drill, Reza spins Assistant Samantha Feller around for the audience to see all angles of the illusion.

Reza Edge of Illusion has opened for the 2021 Branson show season at the Branson Famous Theatre.

With the assistance of a young audience member, Reza performs one of the first tricks he learned as a child.

Reza poses at the end of an illusion after surprising the audience by reappearing on stage.

As the lights fade to black, Samantha Feller, Reza and Christa Kemnitz pose at the conclusion of a stunt.

Masterful illusions and stunts that will leave you on the edge of your seat, personal stories and comedy can all be found with Reza Edge of Illusion.

Entertainer Reza has made his official return to the Branson Famous Theatre for what will be his busiest season in Branson yet.

With several 2021 performance already under his belt, Reza explained that his show is crafted in a way that he hopes will connect with those who love magic and even those who hate it.

“My favorite thing to hear is when somebody comes to the show and says, ‘My wife (dragged) me to the show. I didn’t think I was going to like it and I ended up liking it as much as she did,’” said Reza. “I hope that’s because we put enough in (the show) that no matter what age you are, or what your interest level is in magic itself, the show will still draw you in and throughout it you’ll feel like we’ve gotten to know each other and shared some laughs, shared some stories and hopefully inspired one another.”

During the show, audience members will witness Reza performing a number of high intensity illusions and tricks on stage. Between those feats of magic, the audience will find Reza walking up to the front of the stage and then sitting down on the edge to visit with his theatre guests.

“We intertwine so much in the show that hopefully connects with people on a personal level. You know stories I share about childhood and dreams and following those dreams that I hope people can relate to with whatever their dreams are,” Reza said. “There’s a tremendous amount of production value that we’ve added to the show as well, which I think magnifies the experience as well and just adds different layers and elements.”

The reason for his more personal and almost hands on approach to the show comes from a couple of different things, according to Reza.

“One is, I draw my inspiration a lot from comedy and the music industry more than magic. When you go to a concert, I love the idea that newest hit single from the radio is always a big production, but then that same artist can come to the front of the stage after that and it can be acoustic with them, a guitar and a stool and they’ll tell you about where the idea for the song came from and you’ll feel a bond with that artist,” said Reza. “So I just kind of took that same thing and integrated into the magic to where we have these big elements —the rock concert meets the magic show — and then we have these personal things where the magic almost becomes secondary to what else is going on.”

Reza began his 2021 show season towards the beginning of February. Reza said he’s always working on new illusions and some of those have made their way into this year’s show.

“We’re always working on new illusions. We realize people come back to see the show over and over. Because of that it’s this constant process of introducing new things and then the hard thing is figuring out what to pull out of the show while something new goes in,” said Reza. “But we’ve got several new things that we’re introducing at the beginning of this season and as the season progresses we’ll be adding more and more just to keep it fresh for when people come back.”

Over the course of the last 11 months, the people behind the shows, attractions, lodging, shopping, dining and more in Branson have all been working diligently to take the necessary precautionary steps to reopen their doors and welcome folks back during the ongoing pandemic. Reza explained that to keep his show’s format alive during the pandemic, which includes audience participation, he and his team had to get creative.

“We’ve had to adapt the show to where we keep people apart. I still want to bring people up on stage, so we just utilize masks, hand sanitizer and social distancing and then we have the live camera feed as well,” Reza said. “So we’re able to give people perspective without them physically being close to us. They can see what’s happening from every different angle.”

While the live camera feed has become an important part of his show during the pandemic, Reza said the inspiration to have a cameraman recording him on stage and to show the live footage on giant screens in theatre was actually inspired by the audience themselves.

“I found that people were saying, ‘Oh there’s a trap door in something.’ That’s not the case. So I was trying to decide how can I —I can’t just tell them there’s no trap door — how can I show them every part of everything and that’s how the idea came about,” said Reza. “It’s giving them a view from their seat of everything that is going on. It also allowed me to do close up magic too, which people really love, but being able to do it to a larger audience. So it was kind of an eureka moment. So simple, but so powerful.”

Joining Reza on stage for several of his stunts are Assistants Christa Kemnitz and Samantha Feller. Though Reza has come to call Branson his home since 2016, he has also earned himself the title of the “World’s Top Touring Illusionist.” However, as with many touring artists, Reza’s touring options in 2020 were cut short because of the pandemic.

“Although we were able to re-open our Branson residency in June of 2020, we had performances in New York and Las Vegas which could not go on as scheduled, due to the pandemic. We continued adding canceled dates from other cities to our Branson schedule, which was selling out quickly. All told, we sold over 100,000 tickets in the year 2020, which may be more tickets than any other magic show on the planet. And — if that truly is a world record — that took place in Branson, Missouri. Pretty remarkable,” Reza said. “In addition, we were able to keep our audiences safe and socially distanced, as well as our entire cast and crew, who have stayed healthy since the start of the pandemic. We wear masks, gloves, sanitize constantly and take all precautions we can in order to keep our safety, as well as the safety of every audience member, at top property.”

Following the record breaking year for his show in Branson, and as the pandemic prepares to celebrate its one-year anniversary, Reza said he’ll be hosting more shows in Branson than ever before in 2021.

“When I first came to town I was doing about 70 shows a year in Branson and then 150 or so on tour. That’s totally shifted now. I’ve fallen in love with the area for multiple reasons,” said Reza. “From a performance art standpoint I love what Branson offers and I just love living here and spending time here as well.  Because of that we’ve announced 245 shows just in Branson this season alone. So we’ll still do the tour dates, but the ratio has leaned a lot more towards Branson.”

Reza: Edge of Illusion offers 2 p.m. and 8 p.m. shows depending on the day. For the full show schedule, ticket information or additional Reza tour dates and information visit rezalive.com.

This show is awesome! Can't wait to see the new stuff!