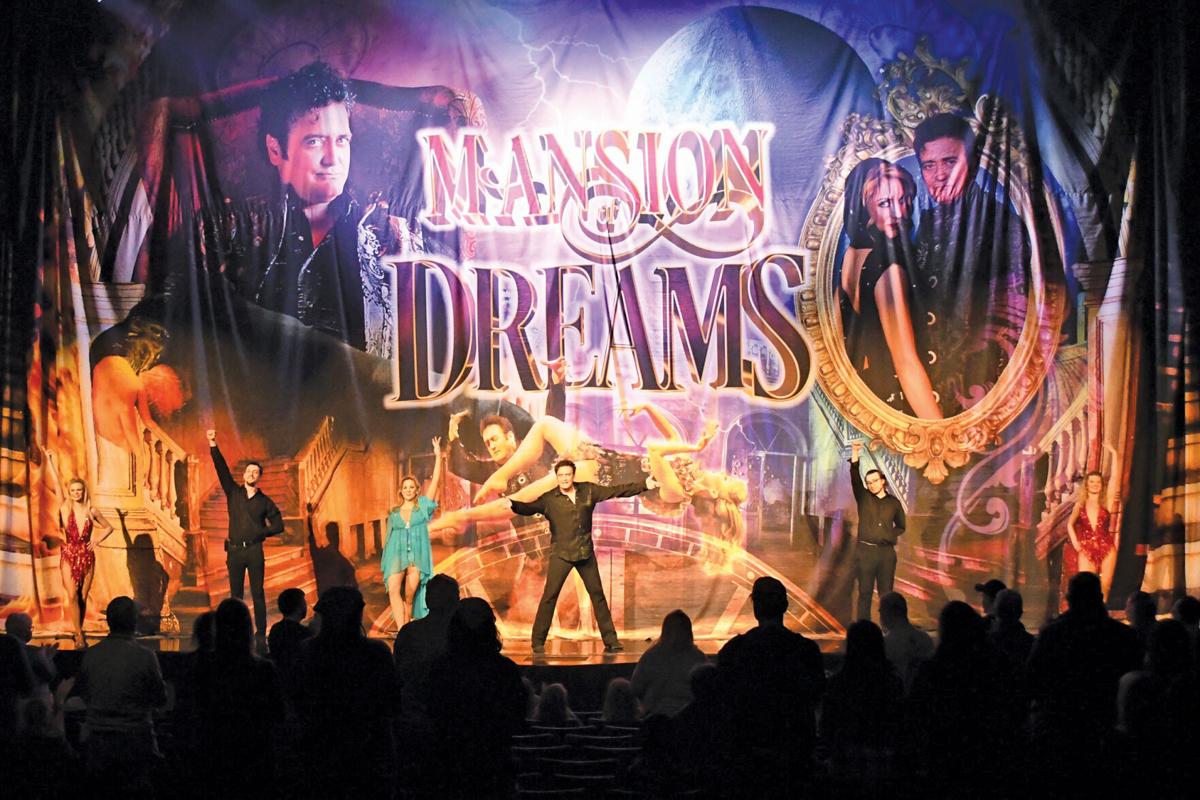 Master Illusionist Rick Thomas has opened his show, Mansion of Dreams, for the 2021 season at its new home, The Mickey Gilley Grand Shanghai Theatre in Branson. 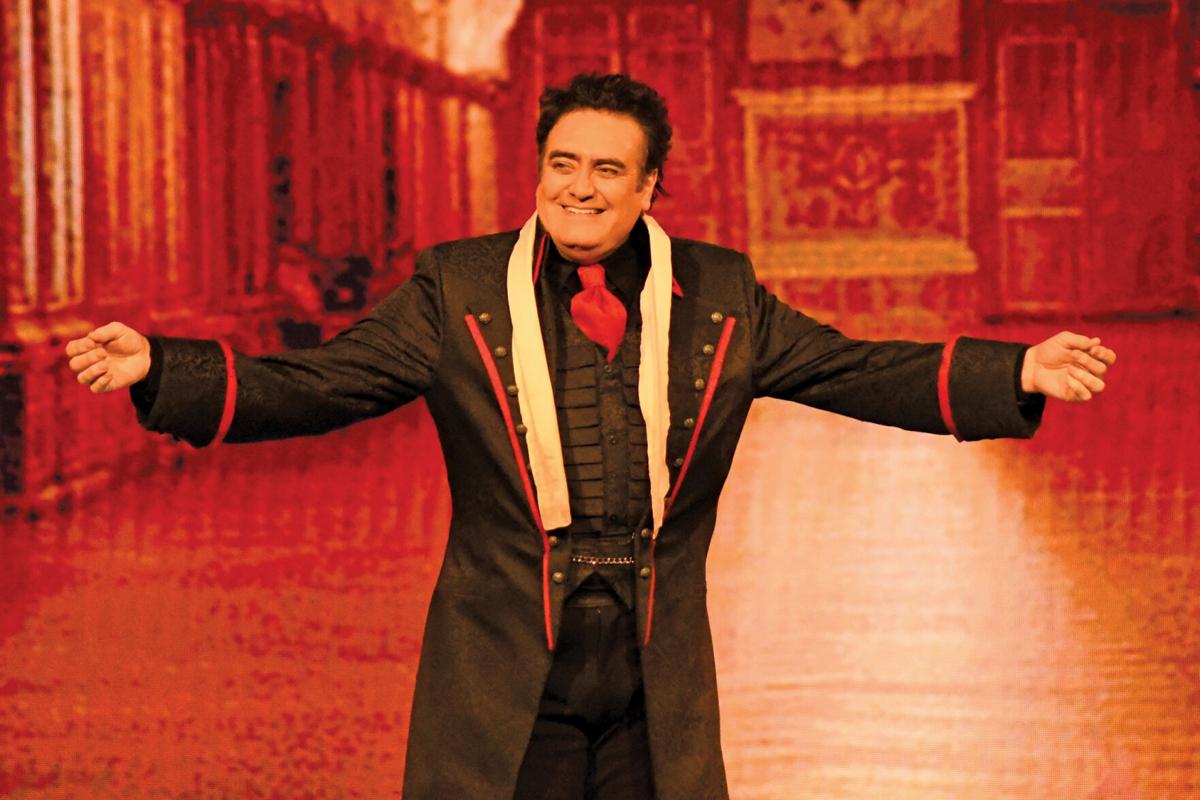 Illusionist Rick Thomas welcomes the audience and invites them to step inside his Mansion of Dreams. 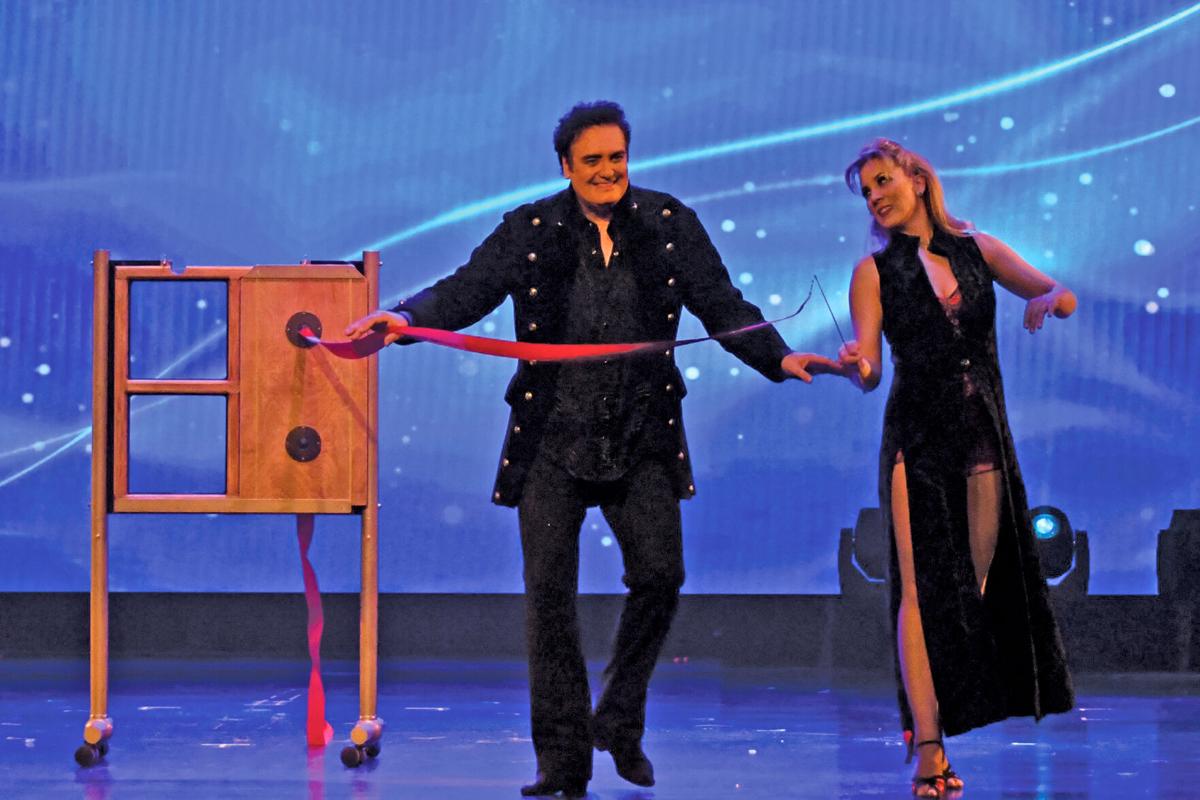 Joined by his wife, Tara, Rick Thomas performs his liquid glass illusion by pulling a ribbon through a glass window. 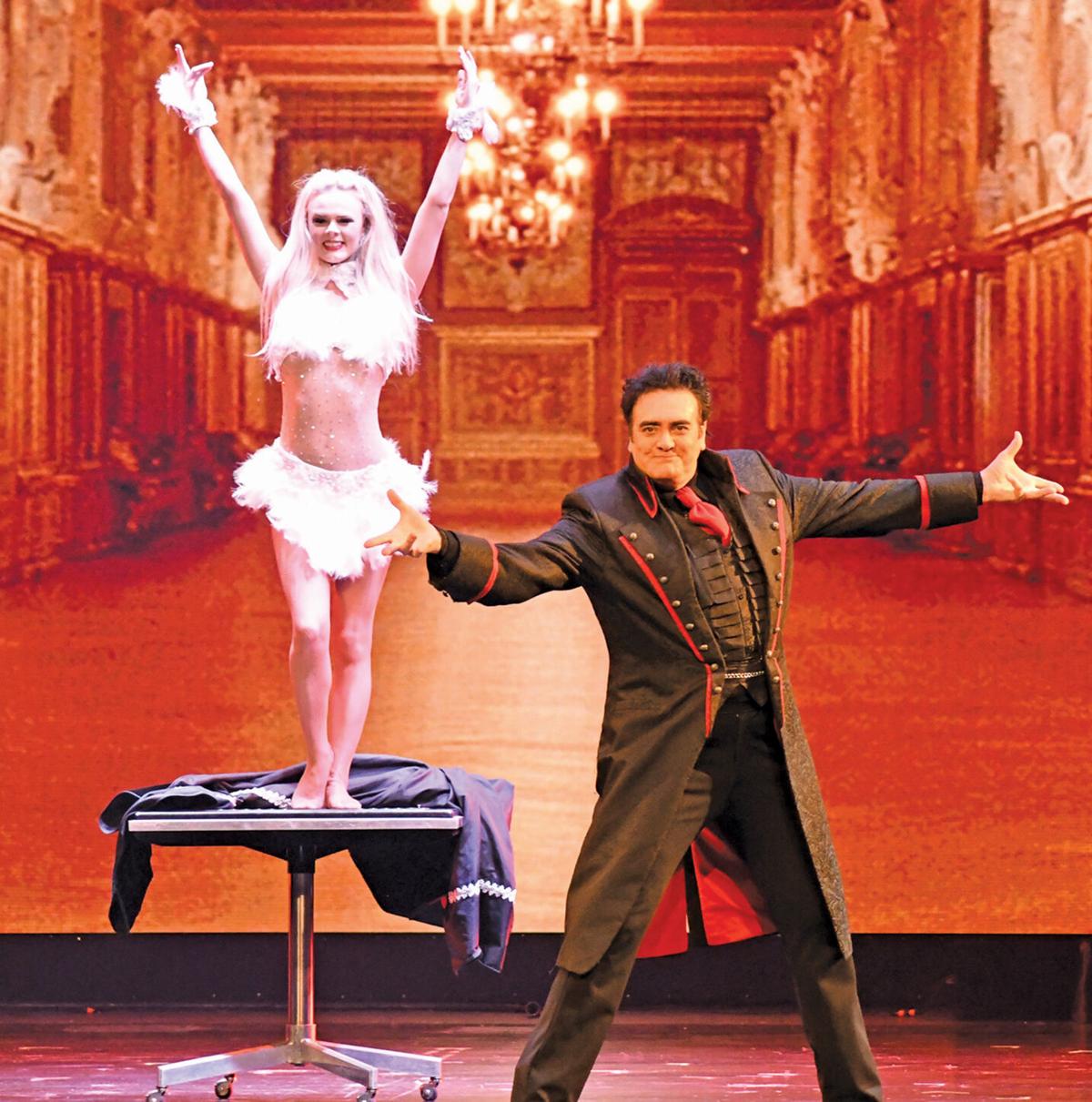 Rick Thomas and Maggie Campbell strike a pose at the end of an illusion during the Mansion of Dreams show. 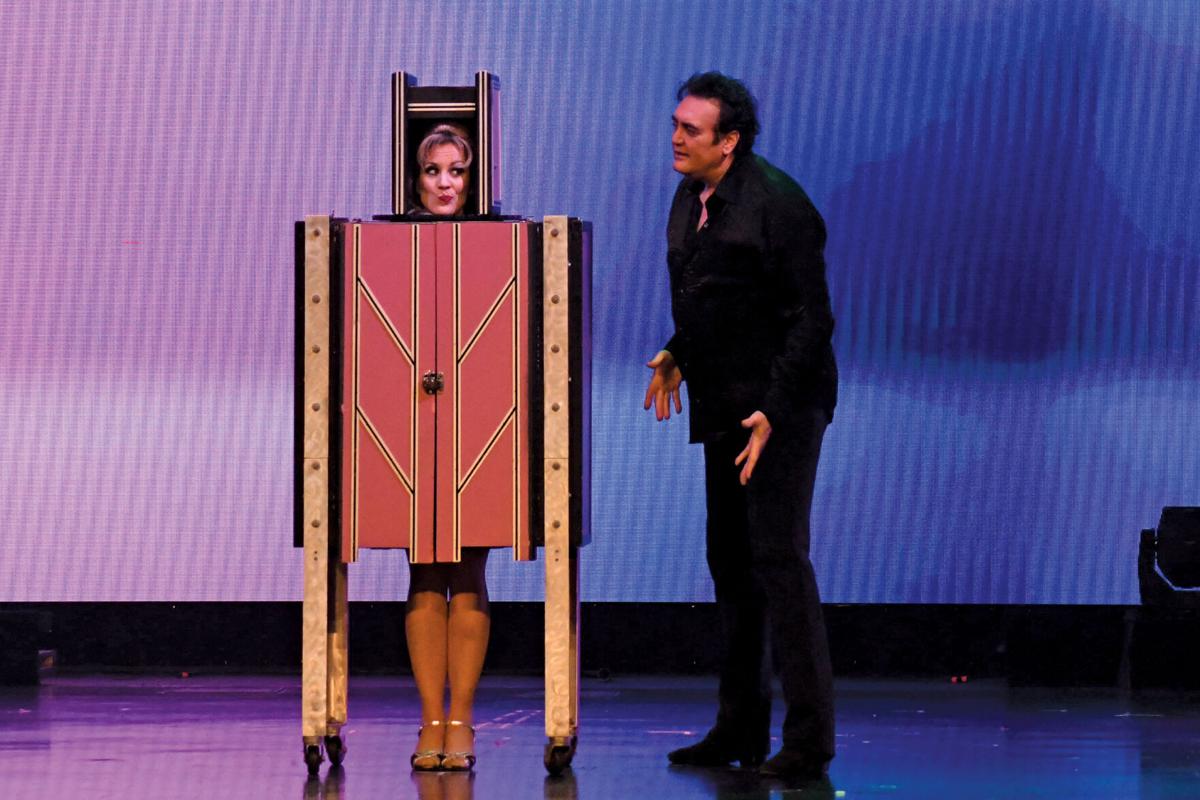 Rick Thomas visits with his wife Tara as he prepares to perform an illusion with her assistance. 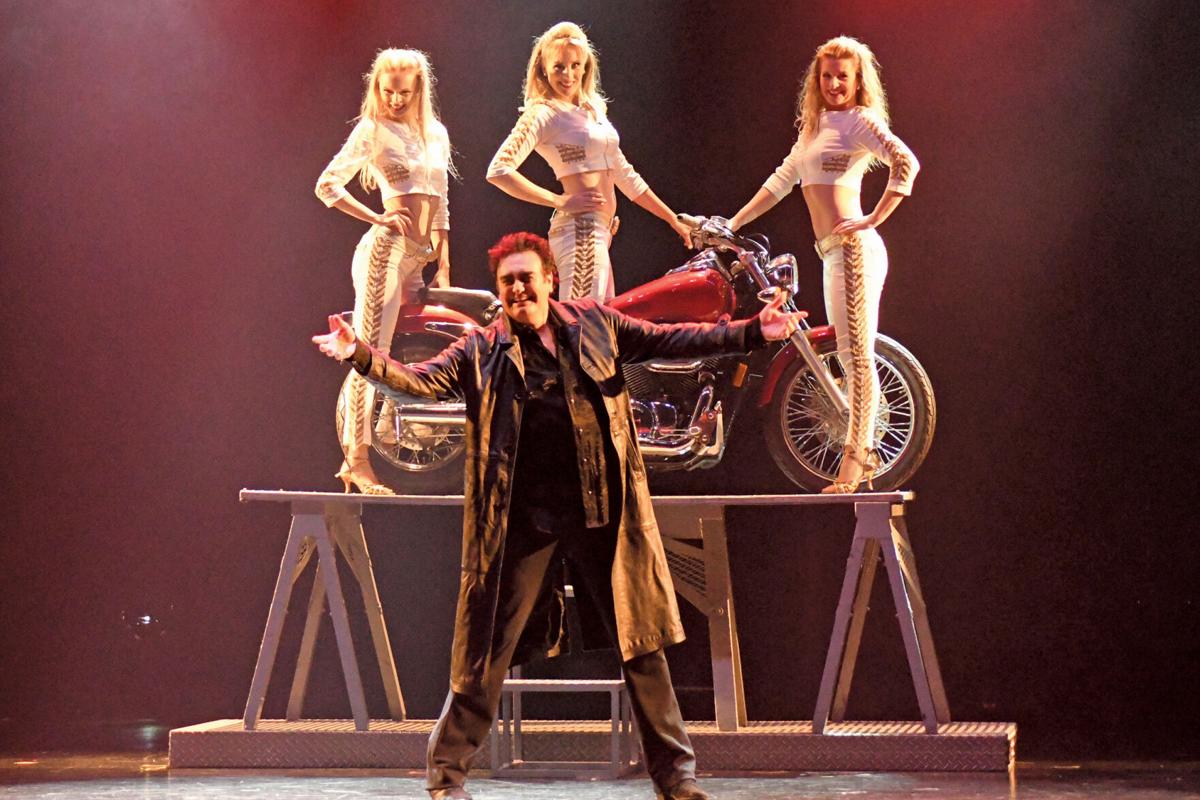 Rick Thomas makes his motorcycle appear on stage during the show with the assistance of Tara Thomas, Maggie Campbell and Sarah Darlington. 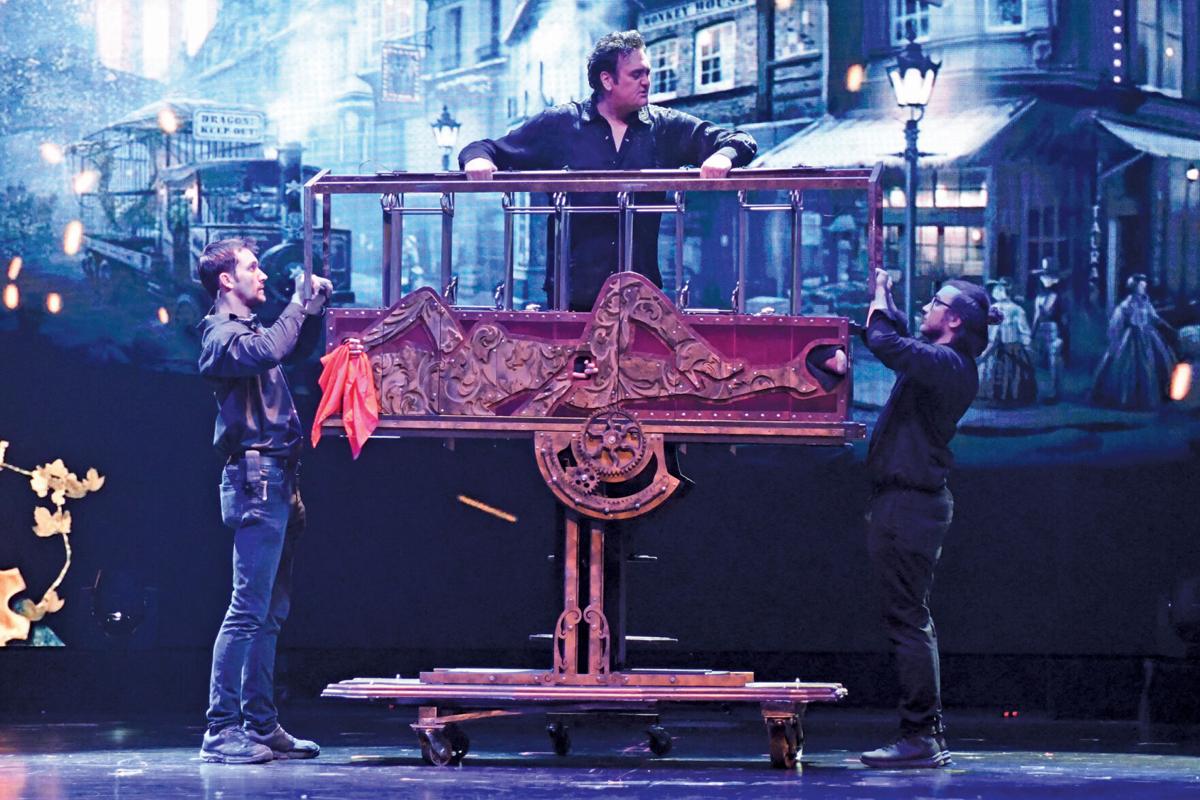 With the help of his two assistants, Rick Thomas prepares to slice his wife Tara into many halves during an illusion. 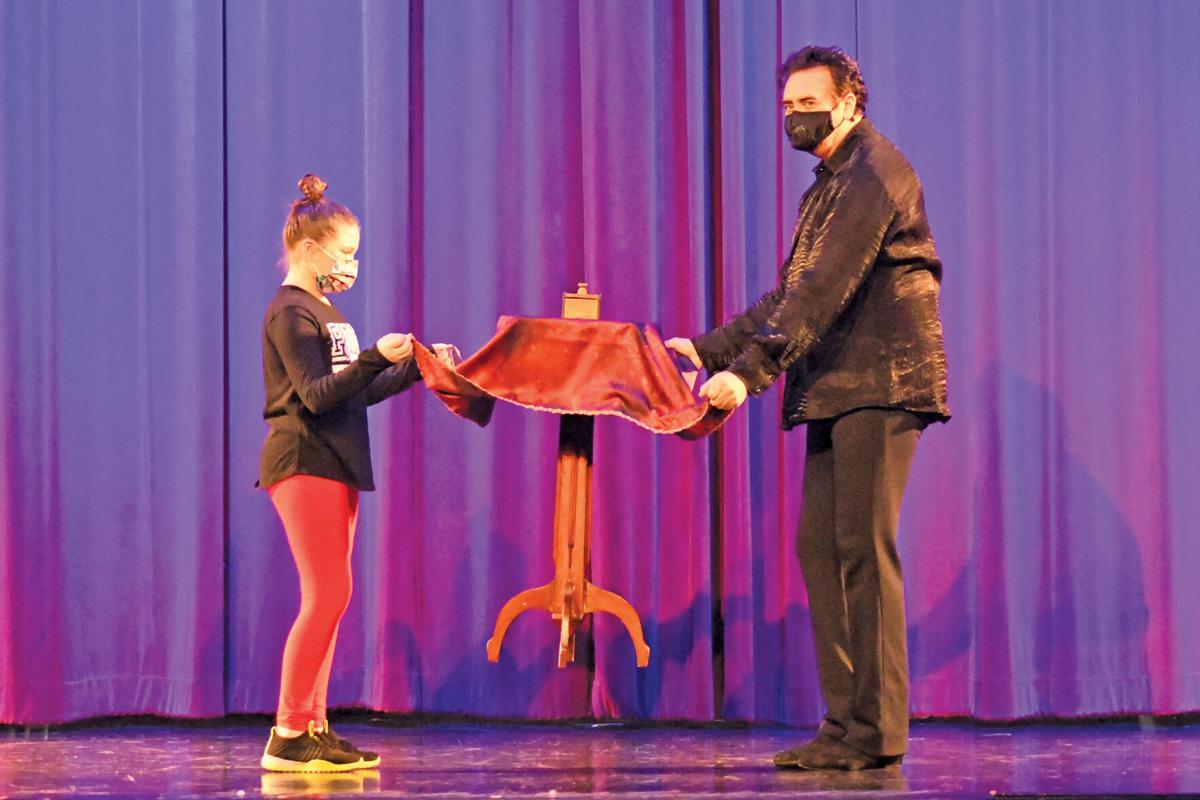 Rick Thomas brings a young assistant from the audience up to the stage to help him hang on to his floating table.

Master Illusionist Rick Thomas has opened his show, Mansion of Dreams, for the 2021 season at its new home, The Mickey Gilley Grand Shanghai Theatre in Branson.

Illusionist Rick Thomas welcomes the audience and invites them to step inside his Mansion of Dreams.

Joined by his wife, Tara, Rick Thomas performs his liquid glass illusion by pulling a ribbon through a glass window.

Rick Thomas and Maggie Campbell strike a pose at the end of an illusion during the Mansion of Dreams show.

Rick Thomas visits with his wife Tara as he prepares to perform an illusion with her assistance.

Rick Thomas makes his motorcycle appear on stage during the show with the assistance of Tara Thomas, Maggie Campbell and Sarah Darlington.

With the help of his two assistants, Rick Thomas prepares to slice his wife Tara into many halves during an illusion.

Rick Thomas brings a young assistant from the audience up to the stage to help him hang on to his floating table.

For years Master Illusionist Rick Thomas has showcased his magic all over the world and now he is inviting audiences to step inside his Mansion of Dreams at The Mickey Gilley Grand Shanghai Theatre in Branson.

After seven seasons of performing in Branson, Thomas announced via social media, moments before his show on Oct. 26, 2020, that his final performance at the Andy Williams Performing Arts Center and Theatre would be that night. Thomas said his abrupt exit from the Andy Williams Theatre was a result of the pandemic.

“The Andy Williams Theatre shuttered its doors because of the challenges we faced just keeping the doors open, and how big the theatre was, in 2020,” said Thomas.

Soon it was announced that Thomas would be moving his Mansion of Dreams show a little ways down the 76 strip and into The Mickey Gilley Grand Shanghai Theatre.

“Mickey Gilley, himself, actually reached out and embraced me and … said, ‘I would love to have you at this theatre,’” said Thomas. “I fell in love with their LED screen and back wall. We recreated the Mansion of Dreams so it could fit in this theatre. It’s not quite as big as the Andy Williams Theatre but I’ve had people tell me, ‘It doesn’t matter.’ The show’s as good as it’s always been and we’re thrilled.”

When he announced his time at the Andy Williams Theatre had come to an end, Thomas said he did not yet know where his show would call home next.

“It was up in the air. We had no idea. We had no home. It was closed and all I did was begin another journey, crossed my fingers and hoped something would fall in place,” said Thomas. “I had discussions with some other theatres in town. I would have been happy to land at any theatre, but this is the best theatre for what we’re presenting now. It fits my show. I’m still able to do all my grand illusions and it not compromise the show.”

Prior to coming to Branson, Thomas completed five world tours, covering more than 50 countries. He also called the city of Las Vegas home for 15 years. Thomas shared when he was invited to come to Branson, he was happy where he was and really debated on whether he should leave Vegas or not.

“When I came out here, I found out it was very family oriented. In Las Vegas I was given an award. I was awarded the most successful show for families in the history of Las Vegas and I was given a key to the city of Las Vegas,” said Thomas. “I knew that Branson being what it is, and being family oriented maybe one of the best places for me to be, because that’s the style of show that I present. It is not a Vegas kind of show. Often when I (first) came to Branson people would say, ‘You’re from Las Vegas, you should just go back to Vegas,’ until they actually watched the show. Then they realized that it isn’t a Vegas show. That it’s for every age and it’s inspiring for everybody.”

For those who have never experienced the magic of Rick Thomas and his Mansion of Dreams show, Thomas said his production is all about following your dreams.

“The Mansion of Dreams is themed as though you’re my personal invited guest to my home and you come to my mansion. I share with you different rooms in the mansion and different aspects of the mansion and within that, still follow your dreams. It’s a wonderful framework and it makes sense,” said Thomas. “There’s a storyline behind it, rather than somebody on stage just doing a few tricks. There’s a saying that ‘Anybody can do a trick, but very few people can perform magic.’ I think that’s probably what you can say about my show.”

Thomas is joined on stage by his wife, Tara Thomas, who commenced her diverse dance training at the age of five in her home country of Zimbabwe. Additionally, Mansion of Dreams features the talents of Sarah Darlington, Maggie Campbell, Griffin Dvorak, Will Weimar and Brandon Jackson.

During his performance on stage, Thomas explained that to him, the most important part of his show is the connection he forms with the audience.

“I try as quickly as possible to break that barrier and break that wall and find a way to communicate with the audience and let them know that we’re all there just to have a good time. If you get fooled in the process, that’s wonderful, but that’s not my intention. My intention is for you to have a wonderful afternoon or evening and the magic is secondary,” said Thomas. “We’re doing the best magic in the world and we’re doing it great. I just like to put it to the side and make it all about the relationship that I have with the audience. That’s the joy. That’s where I find my greatest joy.”

Compared to others in his line of entertainment, Thomas said he believes he’s different because of the bond he strives to have with those watching him on stage.

“That’s why I’ve had such great success throughout my entire career, because I care. There is a barrier that is broken and few people, not just magicians, few entertainers have that capability of breaking that wall down and making the audience feel like they’re family,” said Thomas. “That’s what I fight for. Hopefully in the end they realize I’m just there to have a good time.”

For audiences who had previously witnessed the magic of Mansion of Dreams at the Andy Williams Theatre, Thomas said they’ll be a treated to a whole new experience in 2021.

“Last year was all about the big sets. We had three dimensional sets. This year, nothing from the sets can even fit on this stage, but we have an LED wall. A full wall behind us and I recreated and built a beautiful video production that fit the show,” said Thomas. “All those videos I created myself. I put them together. I followed my gut and said, ‘What would make it great? What could I do that compliments my magic, but doesn’t take away from the magic?’”

Thomas said his goal with Mansion of Dreams is to also present audiences with a show that will bring joy to the entire family.

“I ask everybody coming out (of the theatre), ‘What was your favorite part of the show?’  What’s fascinating is that no two people say the same thing. Everybody’s touched in a different way. If there was only one thing in the show that was great, that’s all they’d talk about. The little kids, they like the dogs, or some woman loves when I fly in the air, or a guy likes it when I make the helicopter appear or even the liquid glass. Something so simple and so beautiful, and they’re just mesmerized.”

Thomas shared there is one simple, but inspiring message he hopes audiences will take with them when they leave his show.

“The message is ‘Nothing happens until you dream,’” said Thomas. “I’ve been very lucky. I get to tell myself every single day to follow my dreams. I only get to say it for a couple of hours for the audience, so it probably helps me more than anybody else. But it isn’t easy. Life isn’t easy, but you have to have hope and you have to have wants and desires.”

Following a difficult 2020 show season for all of Branson, Thomas shared what he’s most looking forward to seeing in Branson in 2021.

“I’m lucky that I’m just breathing. Lucky that the show is open. Lucky that the audiences are pouring back in and they want live entertainment. They really are starving for it. They’re tired of watching events online. We’re tired of watching things on television,” said Thomas. “We want to go out and we want to mingle. We want to be with other humans. That’s what we were meant to do. We weren’t meant to separate ourselves from other people, but experience other people.”

As tourists begin making their way back to Branson this summer, Thomas added that he hopes they’ll join him for a performance.

“Our lives, our hopes, our wishes, our dreams, our desires and all of that, is in coming here and watching my show. It all happens right there in those two hours,” said Thomas. “The experience, the laughter, the tears and the excitement; everything is here and I promise you an amazing two hours of your life. That’s what everyone’s hoping for and that’s what I’m hoping they do when they come see my show. They walk out of here feeling alive.”

For showtimes, tickets and additional information on Master Illusionist Rick Thomas and his Mansion of Dreams show visit rickthomas.com.