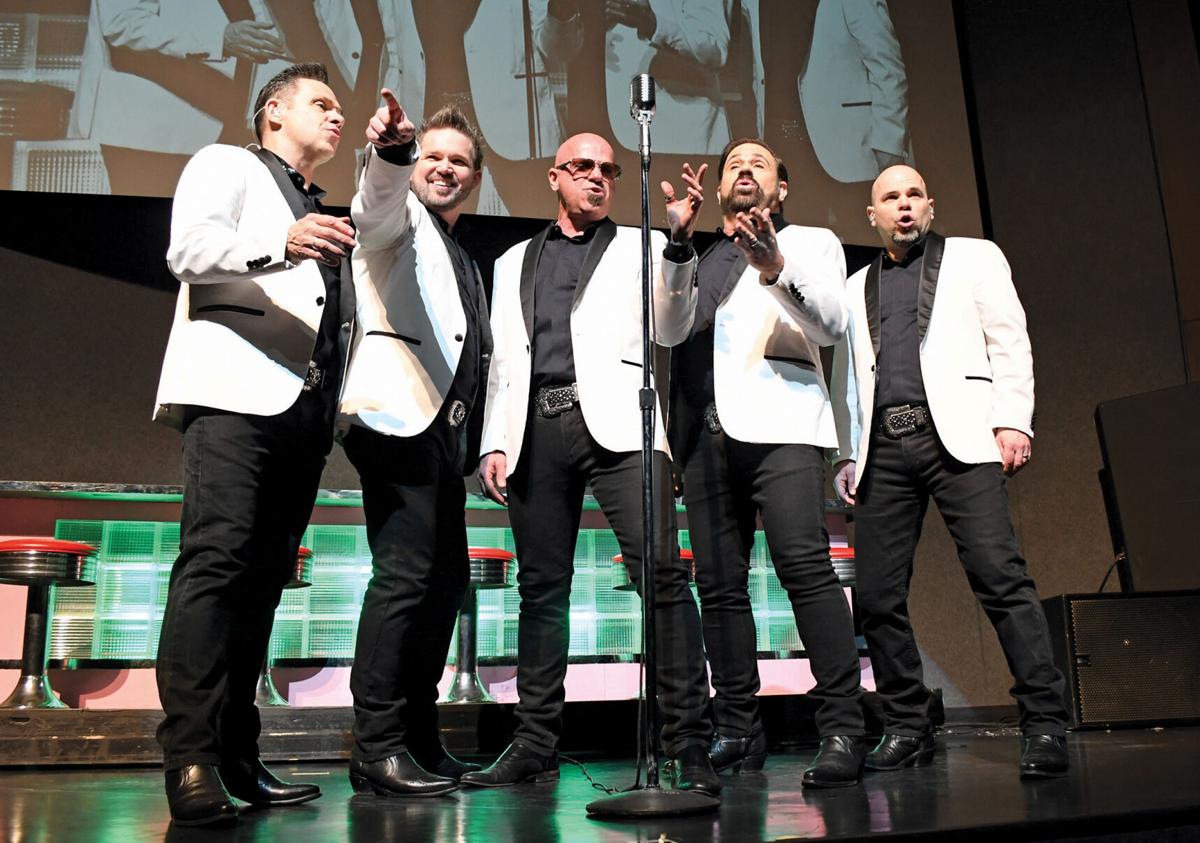 The members of Six, Lynn, Curtis, Jak, Barry and Owen, take to the side stage at Dick Clark’s American Bandstand Theater to perform their next line-up of songs. 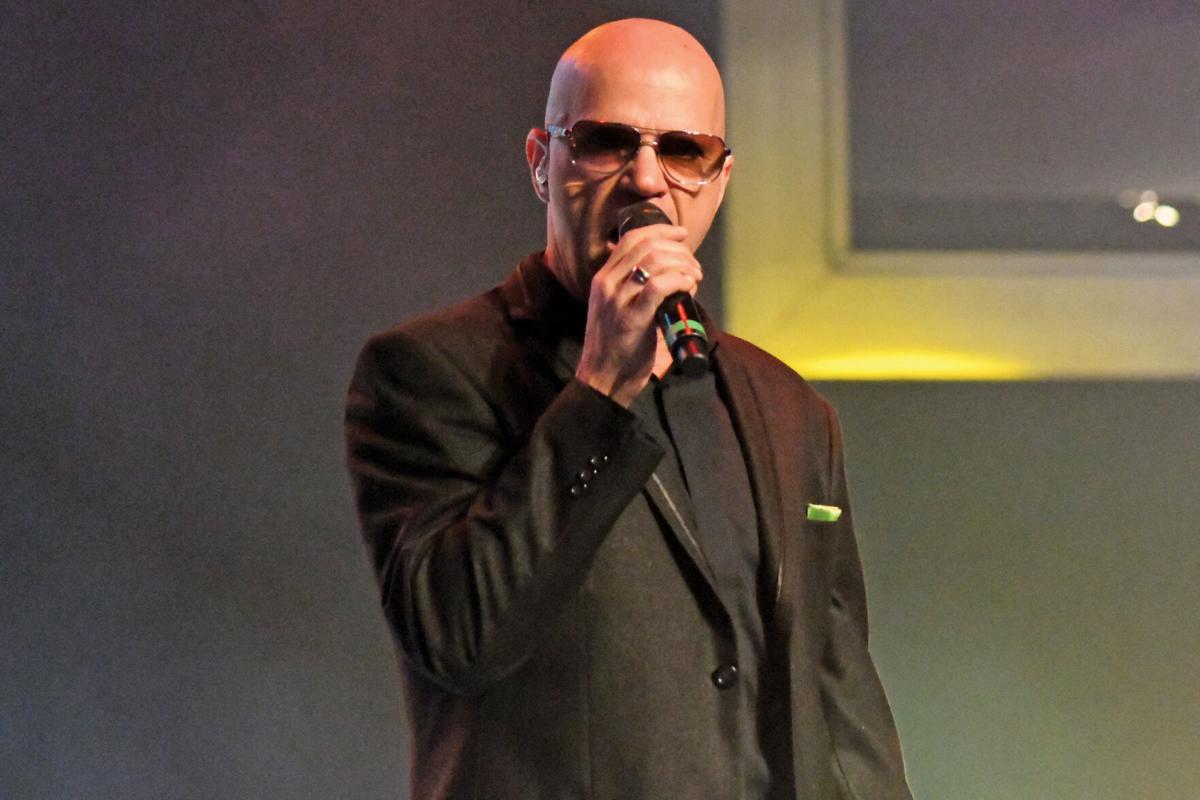 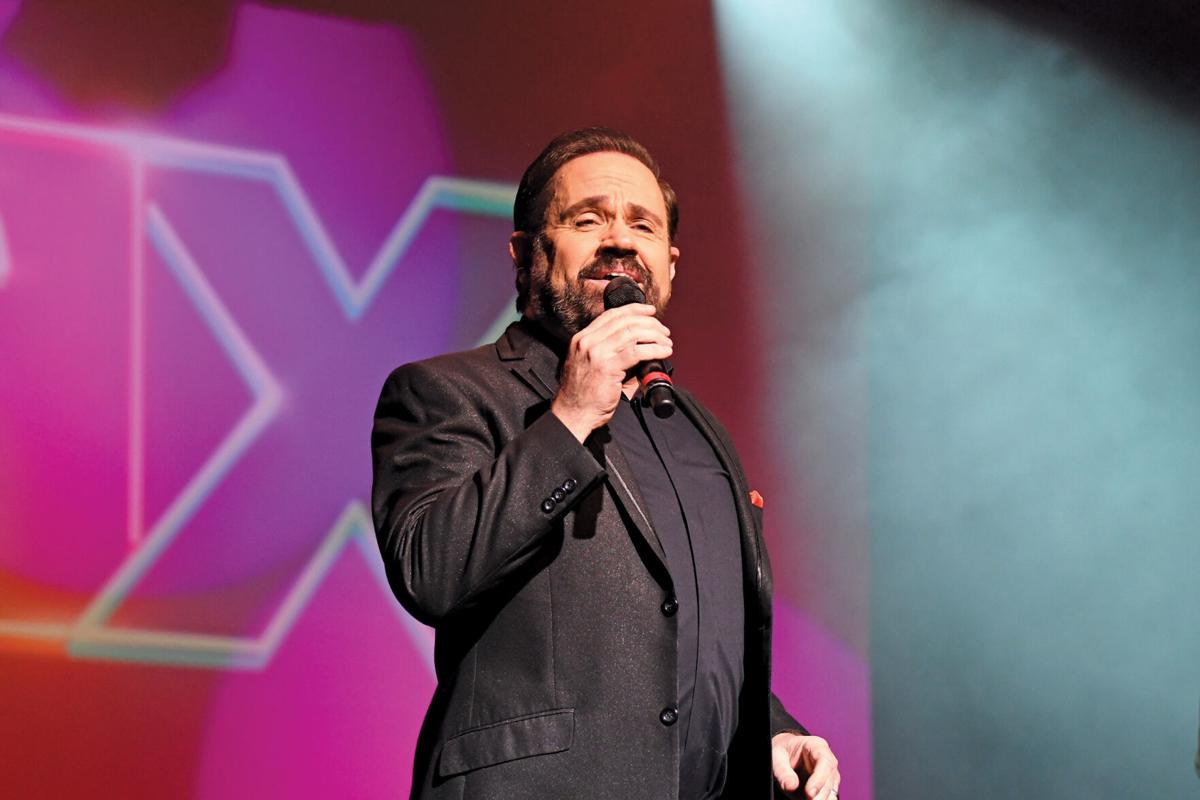 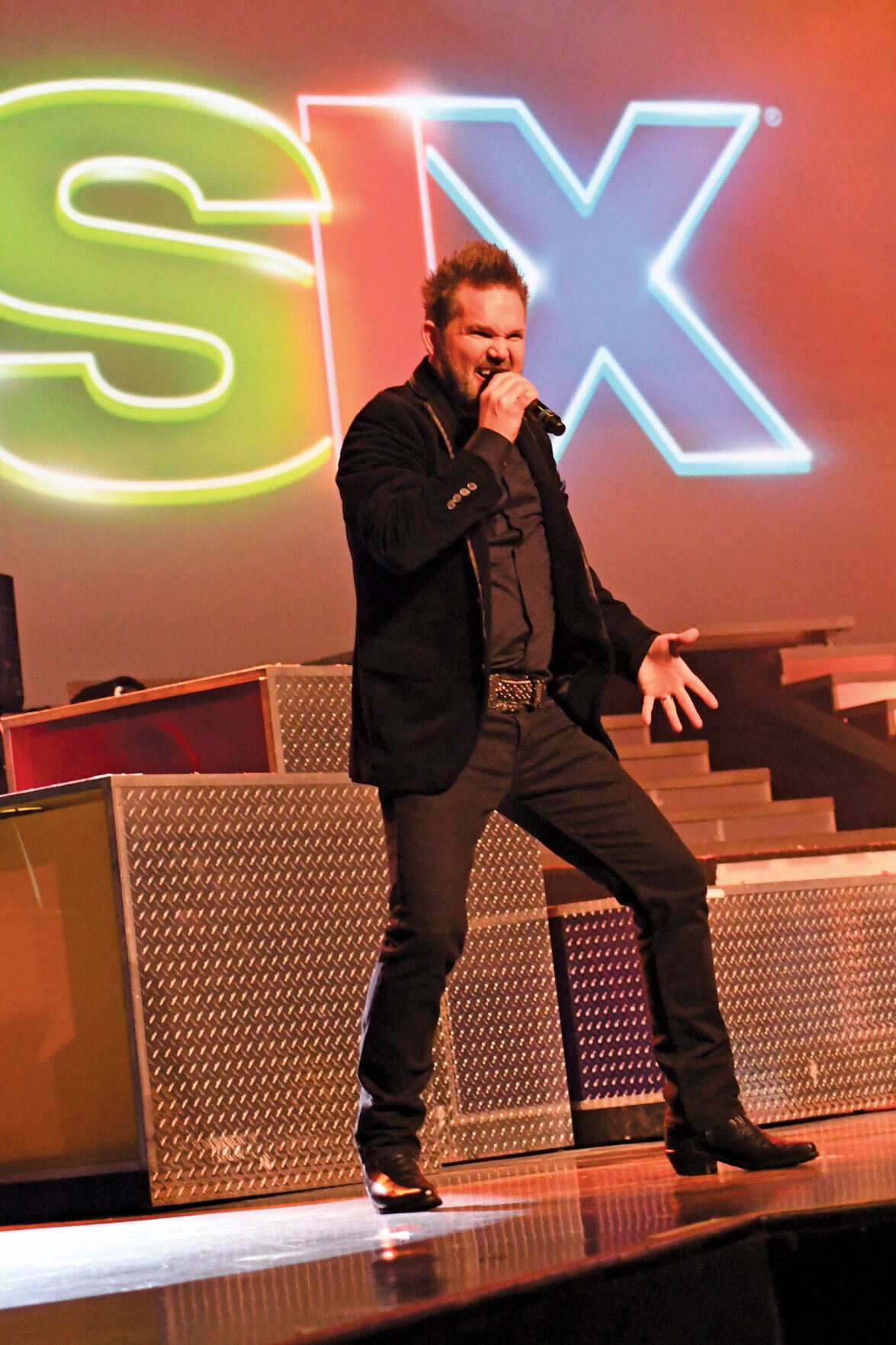 Curtis Knudsen showcases some of his moves while on stage singing one of the many hits performed by Six. 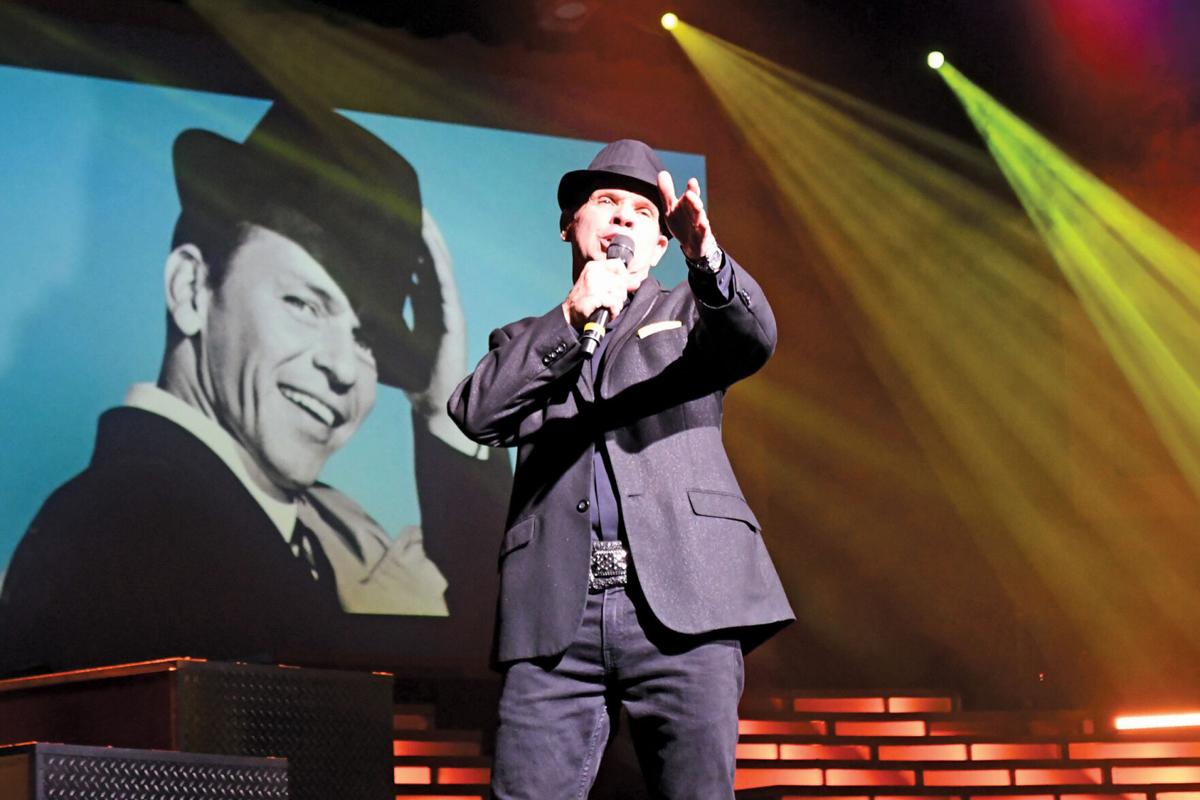 Lynn Knudsen channels his inner Frank Sinatra during a special segment of the Six show. 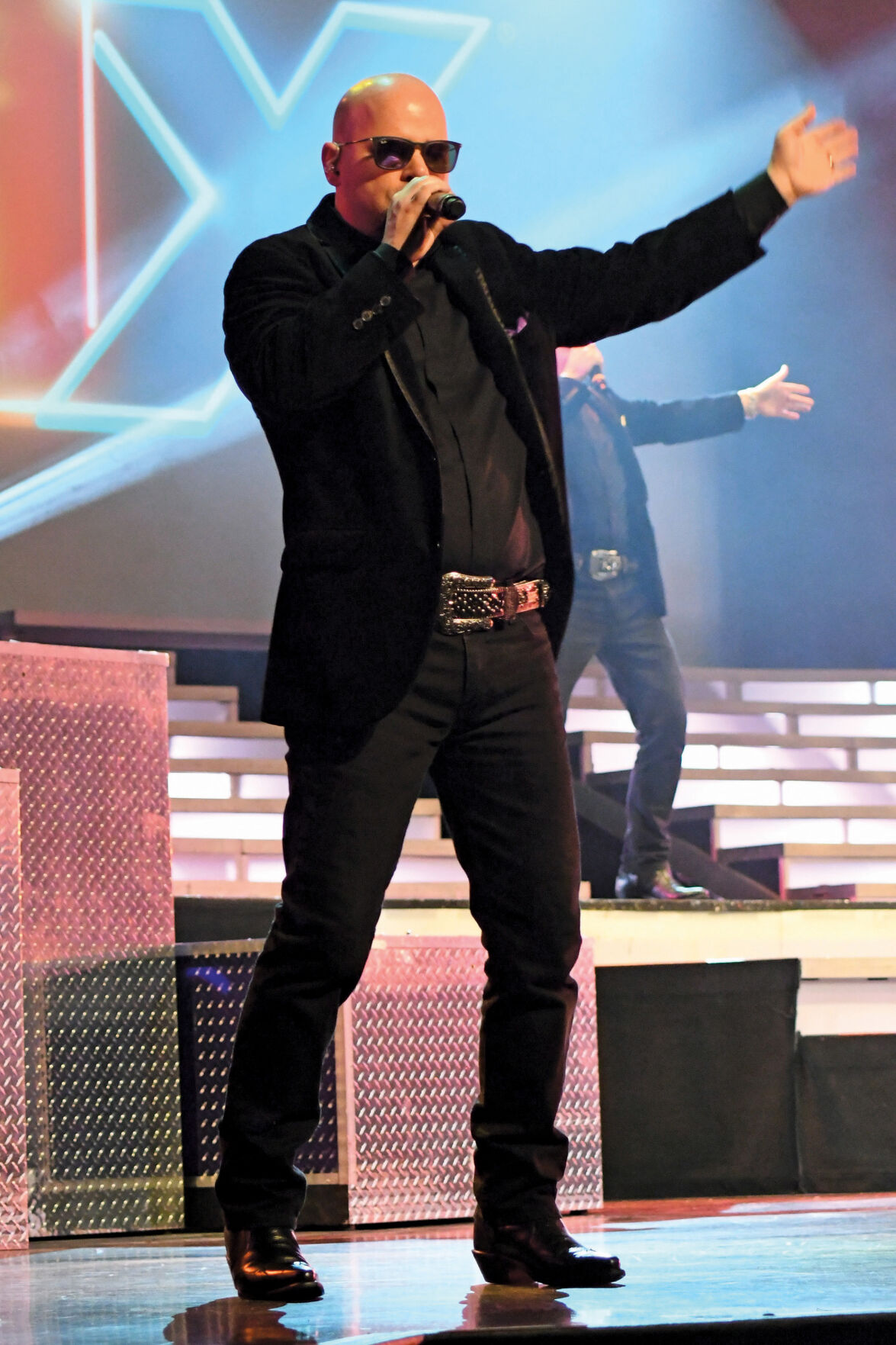 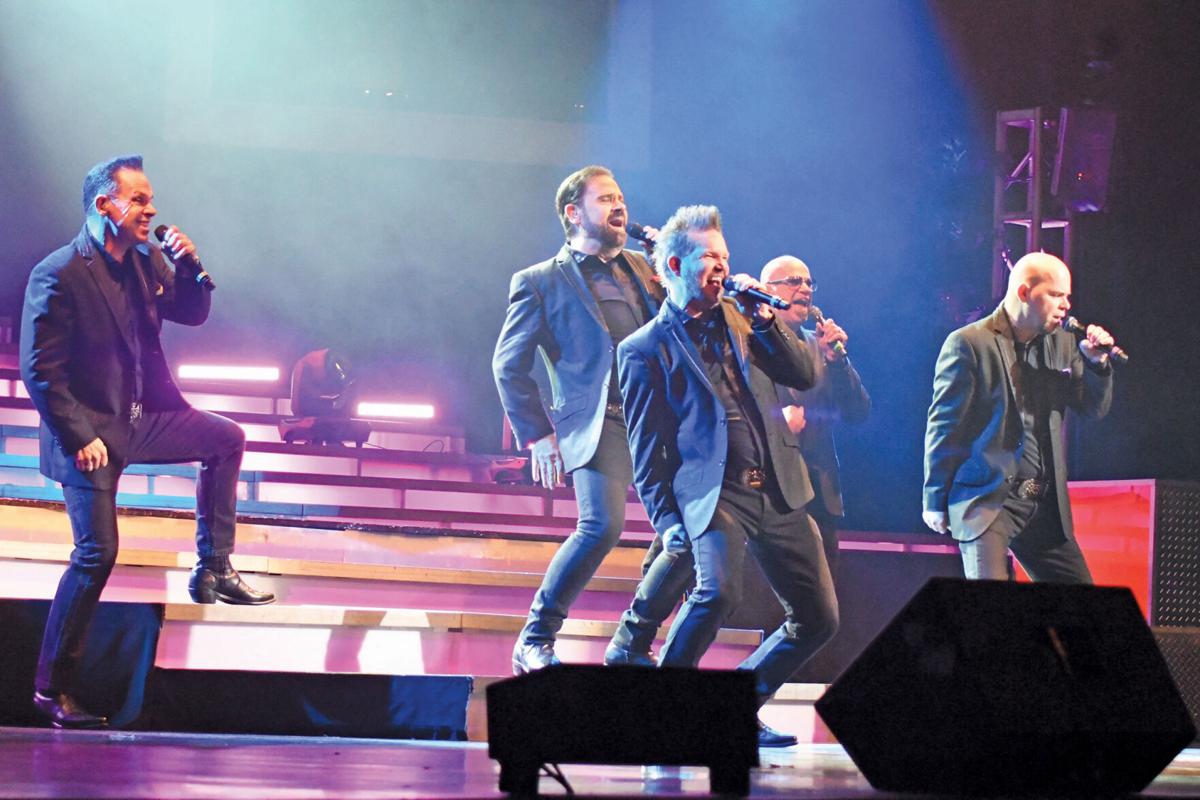 Lynn, Curtis, Barry, Jak and Owen perform a number together during the show. 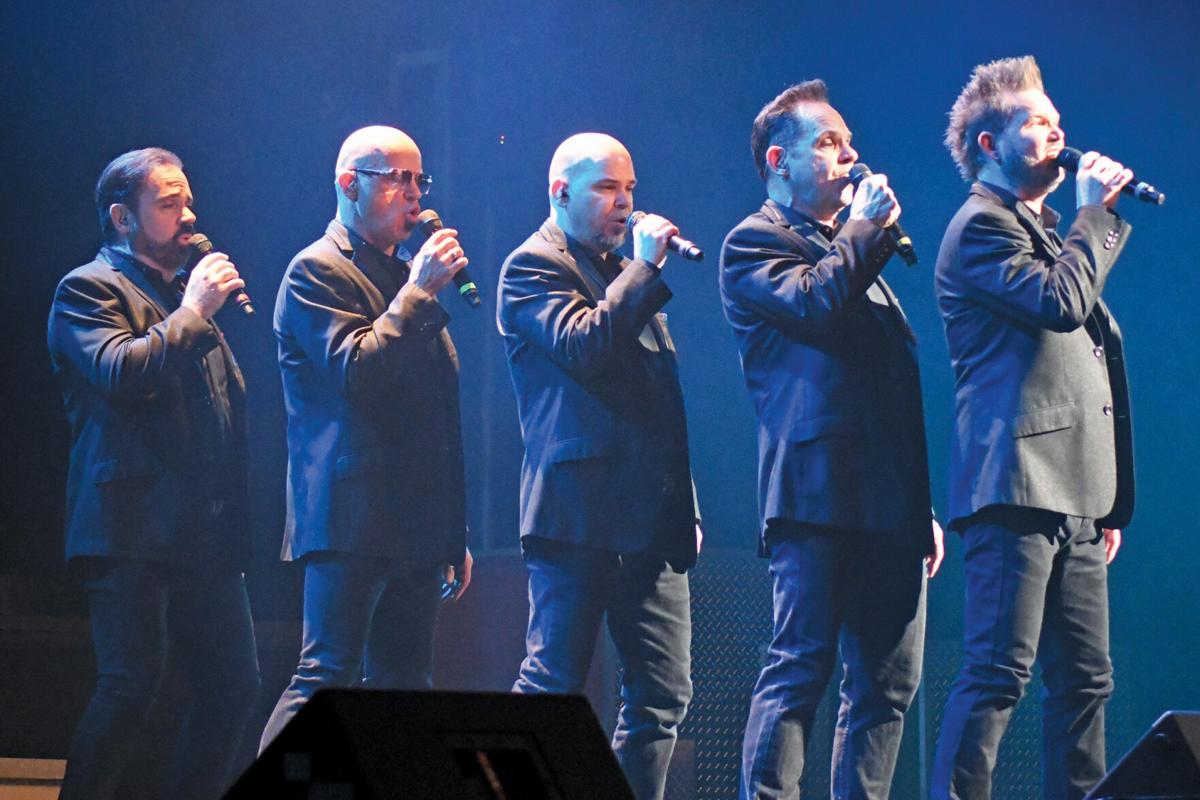 The Knudsen brothers that make up the group Six have been performing in Branson since 2006. 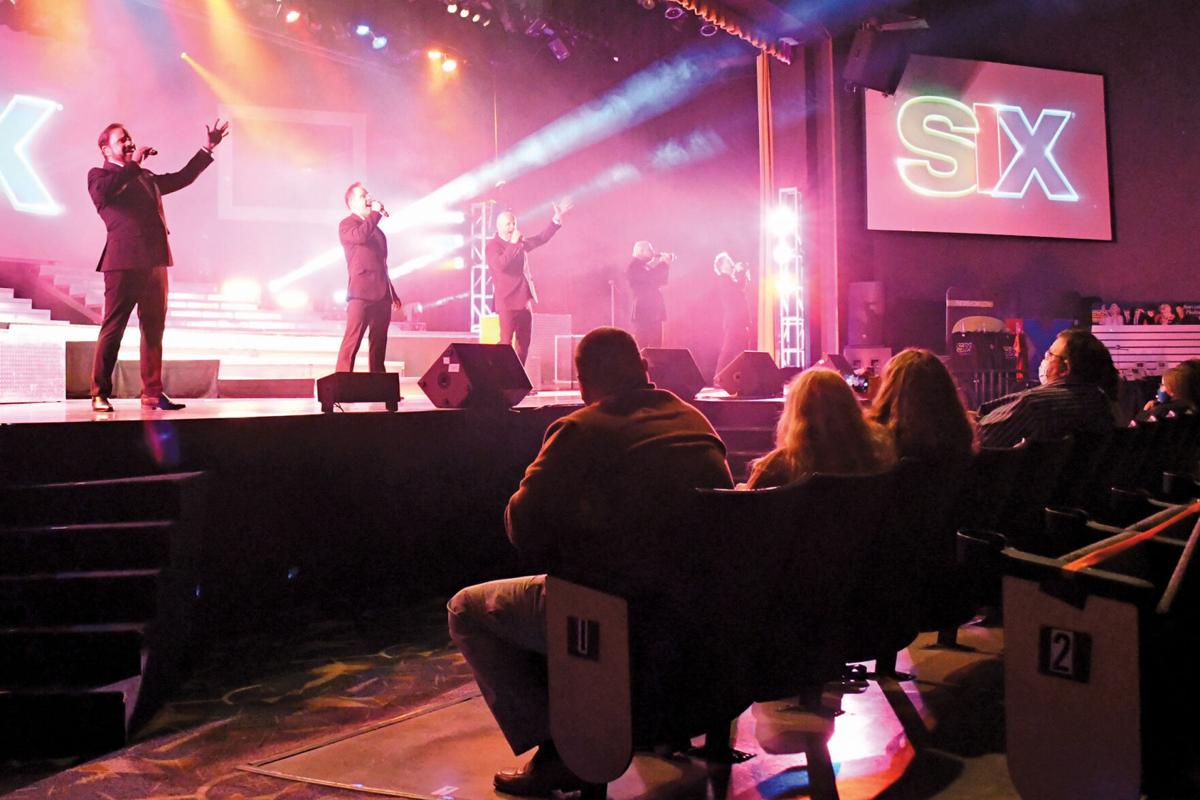 The members of Six, Lynn, Curtis, Jak, Barry and Owen, take to the side stage at Dick Clark’s American Bandstand Theater to perform their next line-up of songs.

Curtis Knudsen showcases some of his moves while on stage singing one of the many hits performed by Six.

Lynn Knudsen channels his inner Frank Sinatra during a special segment of the Six show.

Lynn, Curtis, Barry, Jak and Owen perform a number together during the show.

The Knudsen brothers that make up the group Six have been performing in Branson since 2006.

With performances in January and February this year, Six is kicking off their 2021 season in Branson a little earlier than in past years.

Dubbed “An Orchestra of Human Voices,” Six stars the vocal talents of the Knudsen brothers, Owen, Lynn, Curtis, Barry and Jak, who perform purely a cappella without any instruments.

Six Front Man Jak Knudsen explained that the decision to return to the stage at Dick Clark’s American Bandstand Theater a bit sooner than normal this year  was a result of the pandemic.

“We opted to open earlier than we normally do,” said Knudsen. “I mean usually we go out and do road dates during this time of year, but a lot of stuff in the country is just not going on. So we figured, let’s just open early. We’ll do our road dates here in town that we typically do.”

Since officially starting their 2021 season on Jan. 15, Knudsen said the brothers are already really pleased with the turnout.

“The crowd (Saturday night) was great. The crowd (Friday) night, even though we had snow going on, was a decent crowd. It was kind of looking like, ’Is anyone going to show up earlier in the week?’ But they pulled through. We’re very happy with how these two opening nights have turned out,” said Knudsen. “The nucleus that we have right now and the energy that we have among the brothers right now is, it’s a lot of fun and I hope that comes across on stage. Really the synergy between us is in a really good place right now.”

All together there are 10 Knudsen brothers, with the oldest six of the brothers spending more than 40 years performing together. The Knudsen brothers made their television debut in 1979 on The Osmond Brothers Special where they performed alongside Crystal Gayle, Andy Gibb and Bob Hope. Since 1995, the brothers have performed full-time and traveled the world.

During the performance, Knudsen explained that guests of the show will be treated to an array of music genres from multiple eras.

“You look out in the audience and you see a pretty diverse demographic from the girl on the front row she was 13 and then you look down the row a little bit and there’s people probably in their 50s or 60s or maybe even older. So we try to give everyone something they can at least sink their own teeth into and hopefully enjoy the other stuff that maybe they don’t know as well,” Knudsen said. “We try to throw in something for everyone in the show and make the whole thing as entertaining and as accessible to as many people as possible and keep it family friendly.”

Six has been performing in Branson since November of 2006 and experienced their first full Branson show season in 2007, which makes 2021 their 15th full season in town. For the new year, Knudsen shared audiences will have a few new things to look forward to in the coming months.

“We’ve always wanted to do something by The Beatles. So we’re working a few things like that and a couple of new openers. Our show is always evolving,” Knudsen said. “If someone came and saw our show two or three years ago, they wouldn’t recognize it now because it’s changed so much in that amount of time. From year to year we do change it. There’s just some songs that we just absolutely love singing and it’s a good challenge to figure out how to sing them better and get better on all of the stuff you do. It’s a lot of fun.”

When the pandemic first arrived in the Midwest, and the shutdown in Missouri began, Knudsen said their appreciation for getting to be on stage and performing in front of an audience grew even larger.

“I think we’ve always tried to have gratitude for what we’ve been given here in Branson. When it becomes your normal and you maybe take it for granted at times that it’s just there. You come here every day and the people just show up. Being off and not being able to work for four months, I mean it really changed our perspective, even more so of gratitude,” said Knudsen. “I remember the last night we were able to perform last year before we got shut down and just being brought to tears just looking out at these people. It just kind of hit me, these people come. They pay money to come see what we do, and we can never ever take that for granted.”

Alongside the pandemic, another change that came in 2020 was the exit of Knudsen brother Kevin from the show.

“Our brother Kevin, the second oldest, is pursuing other interest now,” Knudsen said. “We wish him well. We love him and wish him all the luck in the world and all the success.”

“The thing with today’s culture is we’re finding, people don’t seem to care that five is the new Six. It’s about how you make people feel when they’re sitting in the audience and do they still get that, and the answer is yes,” said Knudsen. “We’re grateful to be able to continue on. It’s an adjustment we had to make, but we’ve made it and like I said, the synergy between the five of us is just something we’re really, really, really grateful for and very much enjoy.”

When asked if one of the other younger brothers could one day join the group, Knudsen said that they have talked about it.

“The challenge would be getting them stage-ready, because they’ve never had any stage experience. It’s hard to pack 40 years and condense it into a couple of months,” said Knudsen. “We’ve even talked about possibly having guests come in from time to time. So that’s not off the table completely.”

Knudsen added that, even though there are only five brothers on stage now, show-goers have let them know that they are still having a good time.

“A good time is a good time, regardless if it’s five people on stage or six people. To us it’s not that big of a deal, because we know what our career has been. We’ve had that,” Knudsen said. “We had a great comment from a gentleman who has seen us for years and he said, ‘I came here not knowing what to expect seeing five’ and he said, ‘It’s the best show I’ve ever seen.’  That’s a comment we’ve been getting a lot is that it’s the best show they’ve ever seen. I’ll take it.”