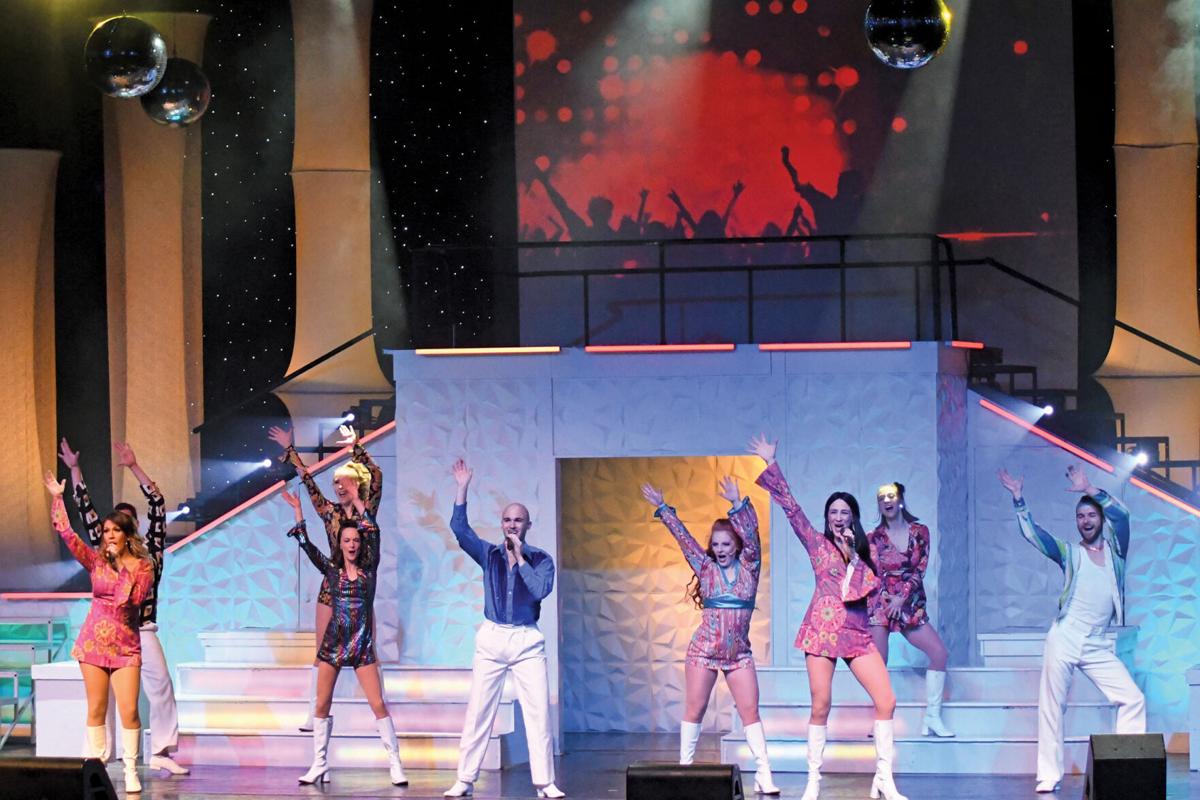 Returning to Branson from Las Vegas, Dancing Queen is now performing at the King’s Castle Theatre with two shows a week, soon to be three shows at the start of summer. 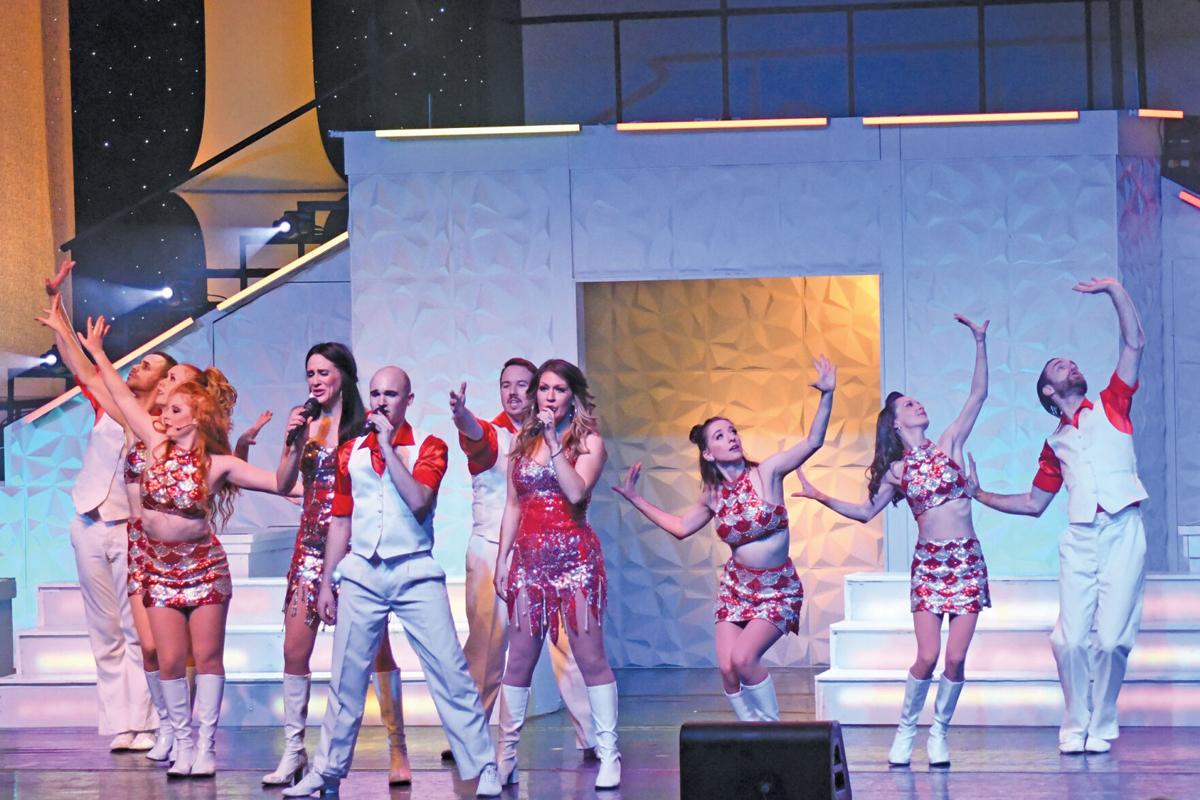 The entire cast of Dancing Queen performs a complex choreographed routine as a part of the show. 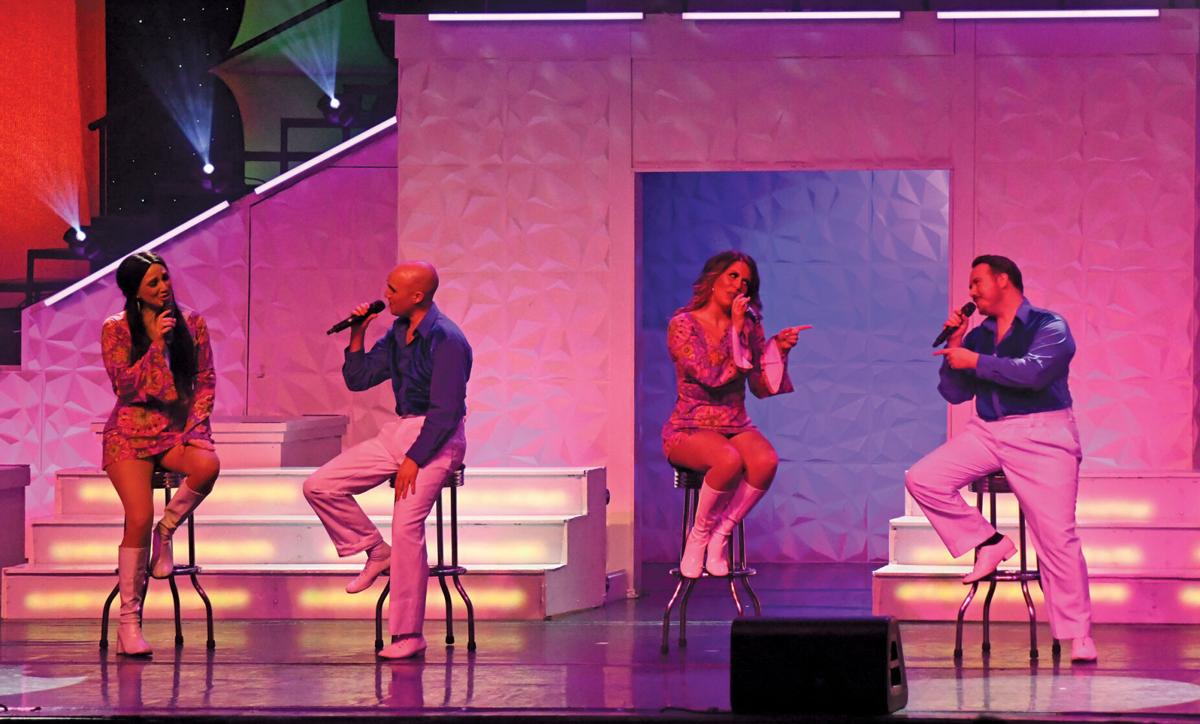 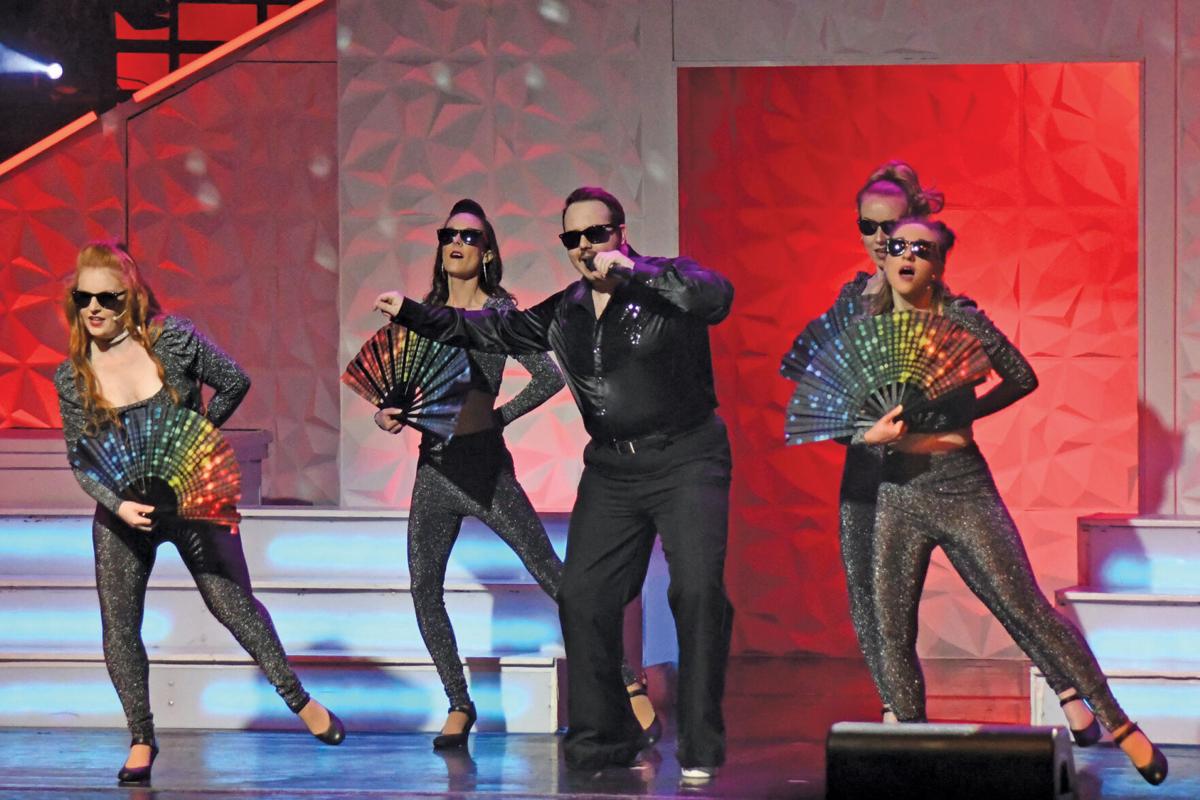 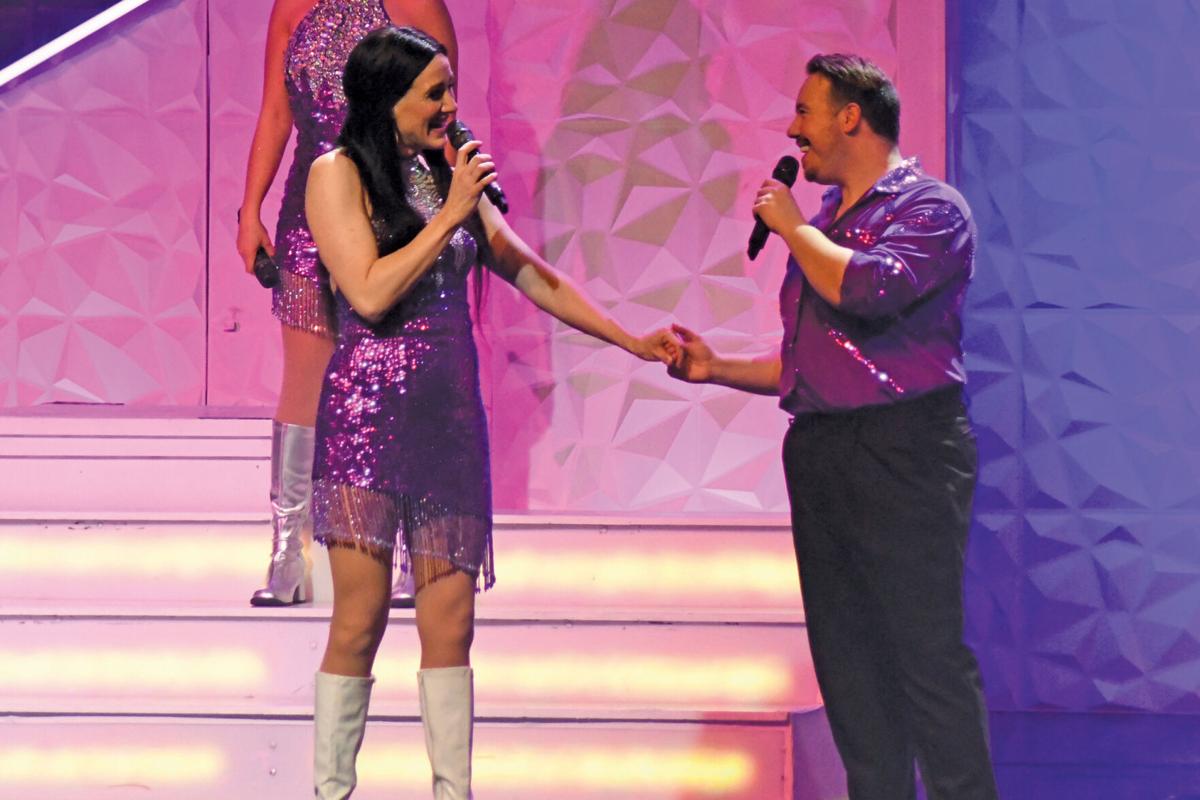 During the production, Mesa Mitchell and Robert James Quibell perform a sweet song to each other. 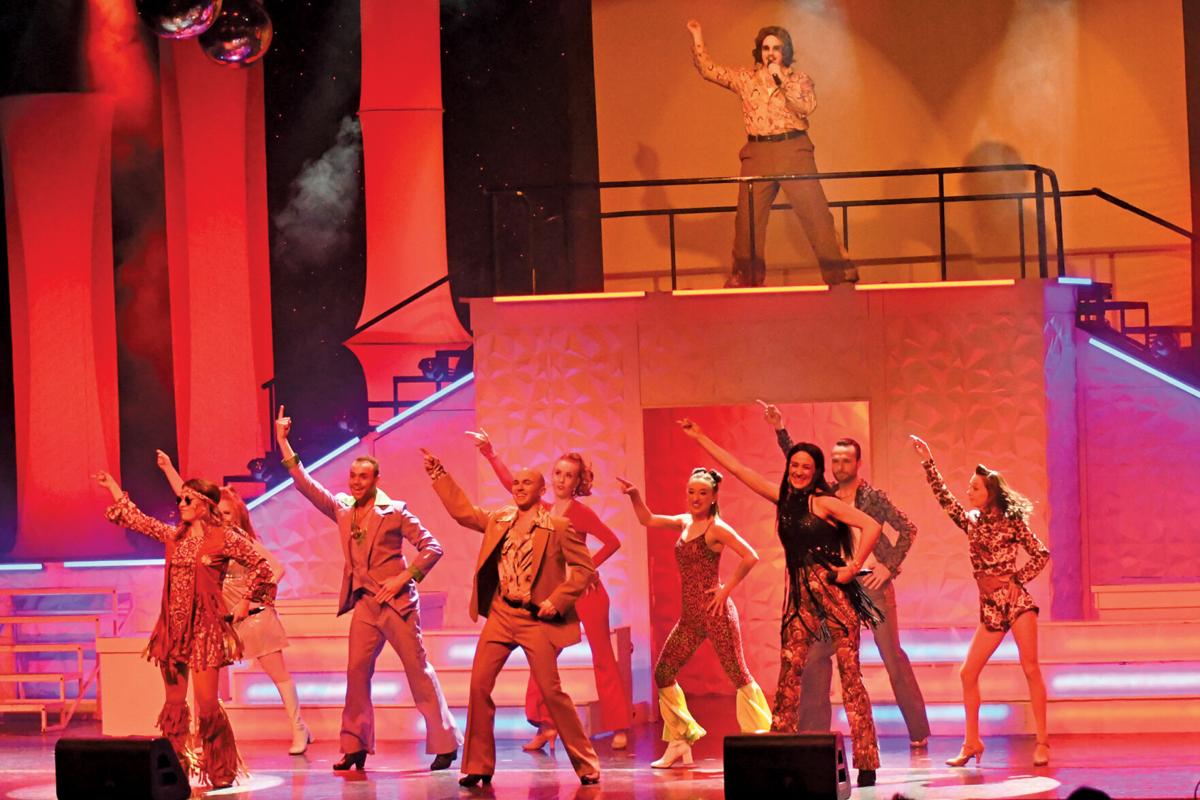 The cast of Dancing Queen performs a classic music hit pulled from the 1970s. 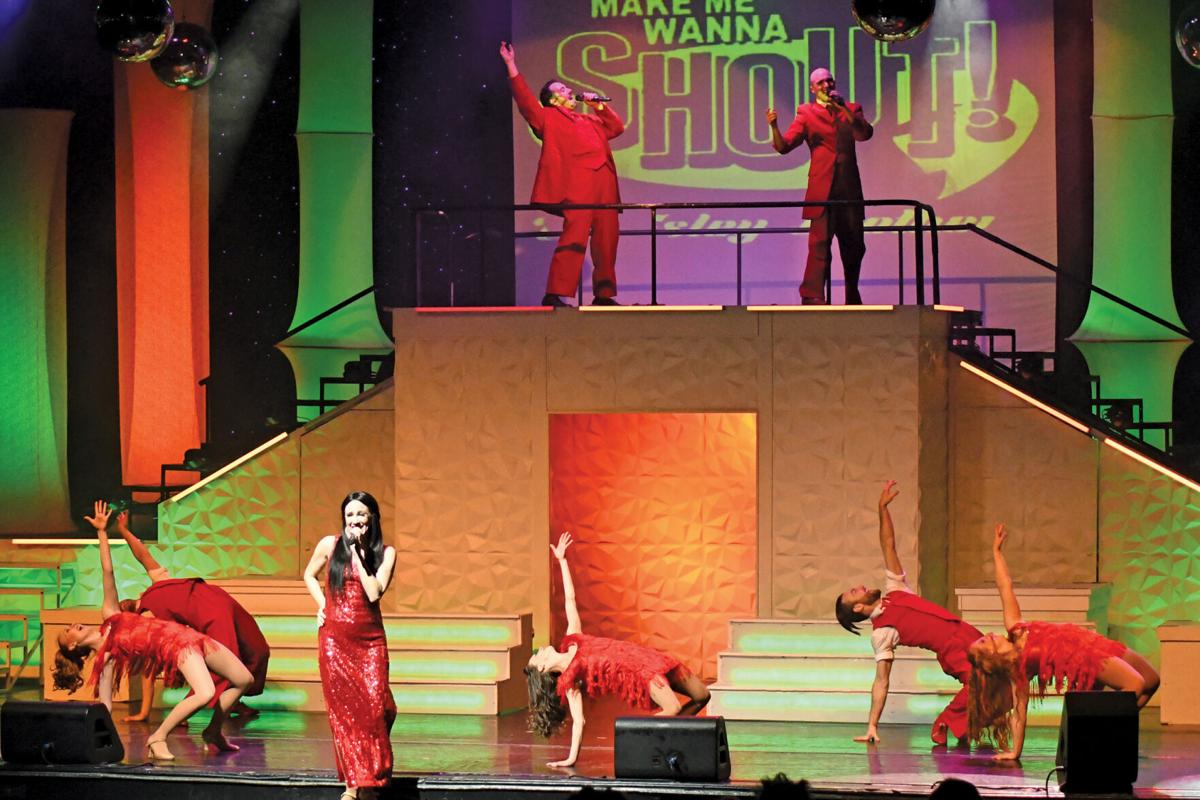 Surrounded by dancers, Mesa Mitchell sings down below as Robert Quibell and Brian Kress perform from above. 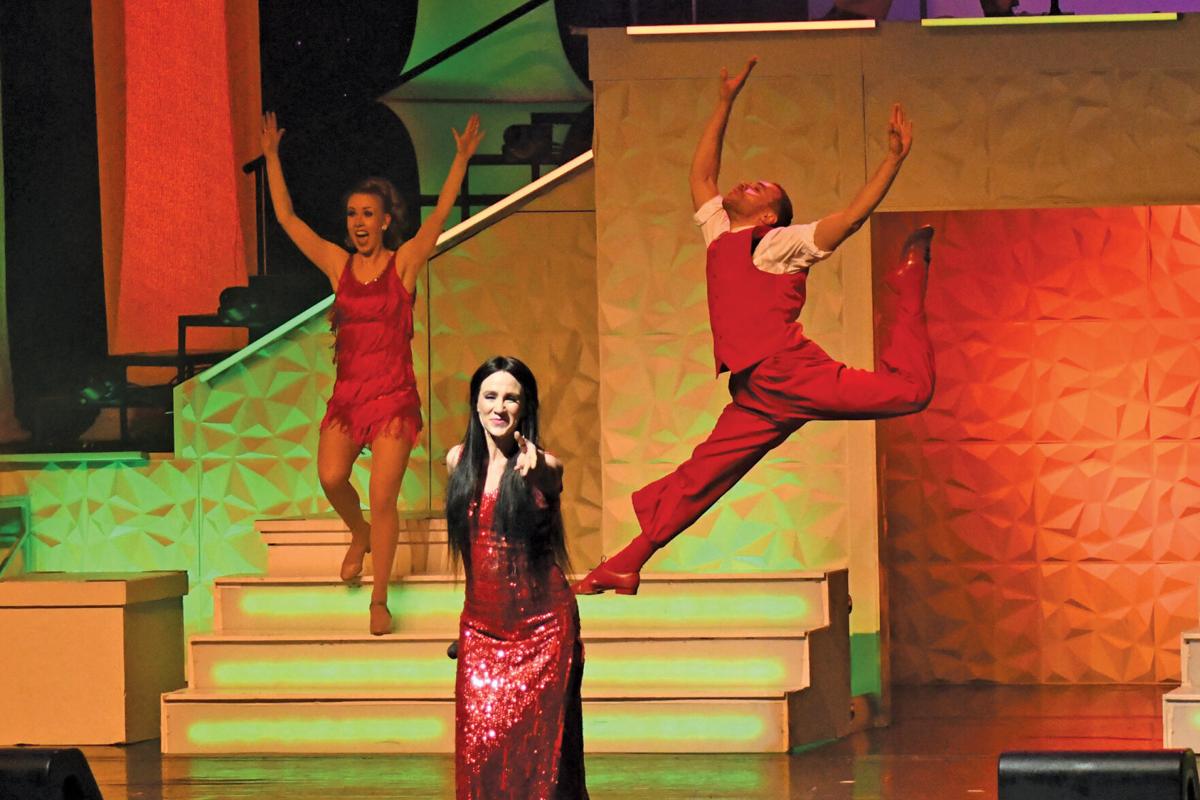 Courtnay Collins and Kelvin Wright perform a dance number behind singer Mesa Mitchell during the show.

Returning to Branson from Las Vegas, Dancing Queen is now performing at the King’s Castle Theatre with two shows a week, soon to be three shows at the start of summer.

The entire cast of Dancing Queen performs a complex choreographed routine as a part of the show.

During the production, Mesa Mitchell and Robert James Quibell perform a sweet song to each other.

The cast of Dancing Queen performs a classic music hit pulled from the 1970s.

Surrounded by dancers, Mesa Mitchell sings down below as Robert Quibell and Brian Kress perform from above.

Courtnay Collins and Kelvin Wright perform a dance number behind singer Mesa Mitchell during the show.

After a short stint in Las Vegas, Dancing Queen has returned to the King’s Castle Theatre in Branson.

From “Boogie Wonderland” to “Love Train,” Dancing Queen promises audiences a show that will leave them wishing they had brought along their bell bottoms and platform dancing shoes.

The history of Dancing Queen is a unique one, as the show toured worldwide before finding its way to Branson, according to King’s Castle Theatre General Manager and Dancing Queen Director Jacqui Bell.

“It was originally made in London. It toured Monte Carlo, which is in the south of France. Then it did a UK tour all over Great Britain. We took it out to Brazil,” said Bell. “Then — this is Mr. David King’s residency theatre that he has here in the USA, which is right here in Branson, which he purchased from Robert Vinton about 20 years ago — he decided in 2014 to bring Dancing Queen to Branson, so that’s what we did. We brought it back again in 2015 and then it went to do a residency at Planet Hollywood in Las Vegas, so the cast went with it over there.”

Bell explained what led Dancing Queen to make its way back to Branson.

“They hadn’t really thought about bringing it back until this year,” said Bell. “When you think about the demographic of people that are coming to Branson, now there’s a lot of people that remember the 1970s. I mean that was 50 years ago now. Maybe 10 or 20 years ago everybody was watching shows from the 50s and 60s. Now I think the 1970s and 80s is more your Generation X type people that remember it and want to hear that kind of music. We thought it was time, so we brought it back.”

For those who caught the show when it was in Branson in 2014 and 2015, Bell said returning audiences will be treated a fully updated experience.

“Everybody is excited to see it and to see the new changes and everything that was made to it. There’s upgrades and we’ve added a lot more diverse artists and genres of the 70s and not just disco,” said Bell. “We do a lot of funk, a lot of soul, some Motown and definitely something for everybody. I think there’s never a dull moment I would like to say. It’s pretty fast paced.”

As part of the show, Bell said audience members will be encouraged to sing along during certain songs as the cast performs some of the best music of the 1970s.

“We do some ABBA music, we do Bee Gees, we do some Gloria Gaynor and Donna Summer. We’ve got ‘Play That Funky Music,’ we do ‘Car Wash’ and we go down the ‘YMCA’ route. We do some Don McLean; his ‘American Pie,’” said Bell. “We do a little bit of Neil Diamond and ‘Sweet Caroline,’ which the audience loves and they sing along. Those are the sing along parts that the audience gets real involved in and I think takes them by surprise, because they think they’re just going to see disco stuff, and then we throw some curve balls in there, which have gone over well. I feel like they appreciate that and get in on it and sing along.”

Dancing Queen also features songs like “Waterloo,’ ‘The Hustle,’ ‘Disco Inferno,’ ‘We are Family’ and many more. As the 1970s welcomed in such an array of popular songs, Bell said one of their biggest battles was selecting which songs to include in the show.

“There’s so much material that I want to get in there that we make our own arrangements of songs and do a lot of medleys, so that we can fit more in. A lot of these songs, if you do the original song, it’s going to be six or seven minutes long, which you just can’t do that otherwise you would only have about ten songs. So we cut them down and we pick out the best parts of the songs, so we can fit more in there. It’s a constant battle and it will evolve as well probably throughout the year where we might want to take some songs out to put other songs in.”

Bell added that the song selections in the show can also change based off of the recommendations of their audiences.

“We listen to our audience members. If there’s something that people are really asking for that’s not in there, we go ahead and put it in there. We create these shows ourselves right here in the theatre, so we can do pretty much what we want with it,” said Bell. “Audience members, leave reviews and let us know. If there are songs you would like to hear, let us know and we can see what we can do. There is still a lot of material I want us to add, but like I said, we just couldn’t.”

The show an audience member sees at the beginning of this season maybe completely different to the show they’d see at the end of the season, according to Bell, who said they continue to evolving the material to improve the show and try out new things throughout the entire year.

“We have the most fun with it, because it’s a fun era. You can just go anywhere with it,” said Bell. “The costumes are great. Everyone really enjoyed getting to put on all the colorful flairs and platform shows. We’ve been having a blast with that. We’ve just really been having fun with it.”

Though they’ve only hosted a handful of shows this season thus far, Bell said the audiences reception of Dancing Queen has been amazing.

“They’re loving it,” said Bell. “They just weren’t expecting such, I guess, high quality, high energy production. The response has been great and everything we could have asked for, so I’m really pleased. That’s all you can do. We’re here to please the audiences, not ourselves. It’s good that we enjoy doing it, but ultimately it’s to please the audiences and the people that are paying money to come and see it.”

As the show has proven to be quite popular, Bell said they’ve already decided to add another show time to their weekly line-up this summer.

Though its Branson residency only lasted two seasons the first time around, Bell shared her hopes for the show now that it’s back.

For additional information on the show, tickets or for showtimes for the rest of 2021 call 417-334-2500 or visit kingscastletheatre.com.