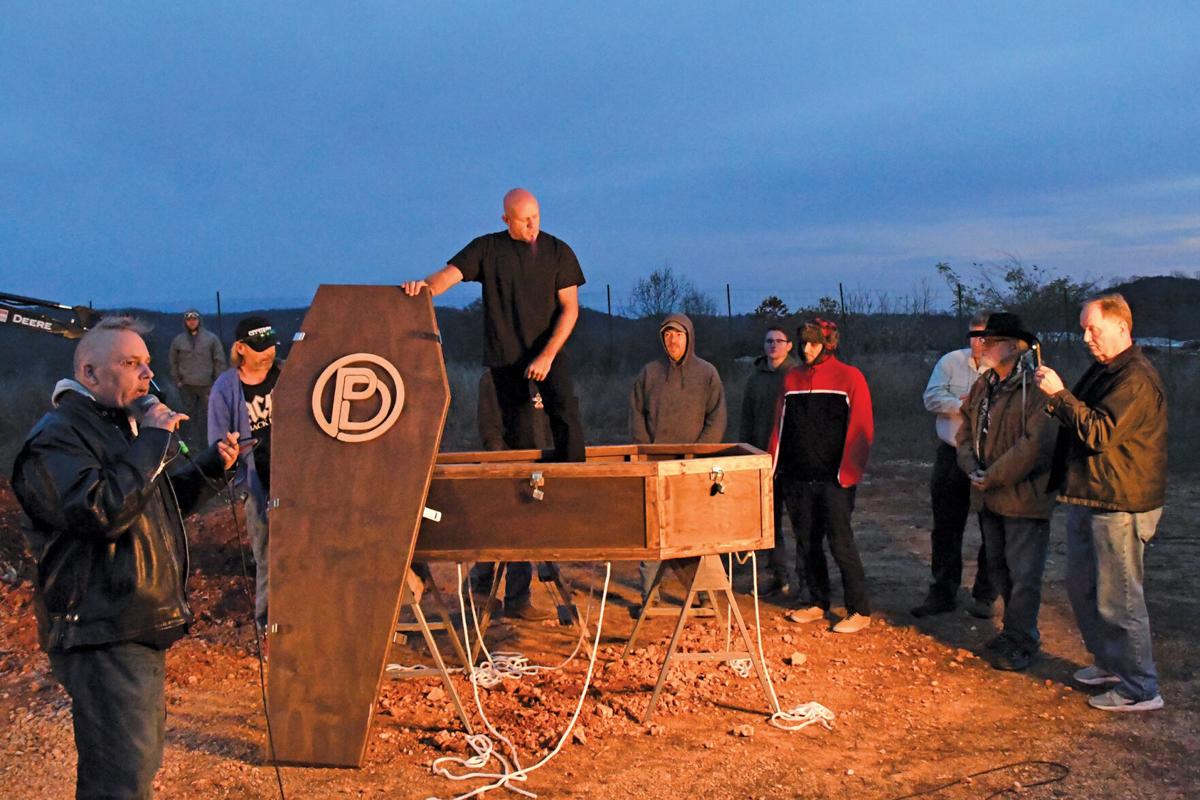 Dalton prepares to climb into his coffin as audience members surround him to help lower him into the ground. 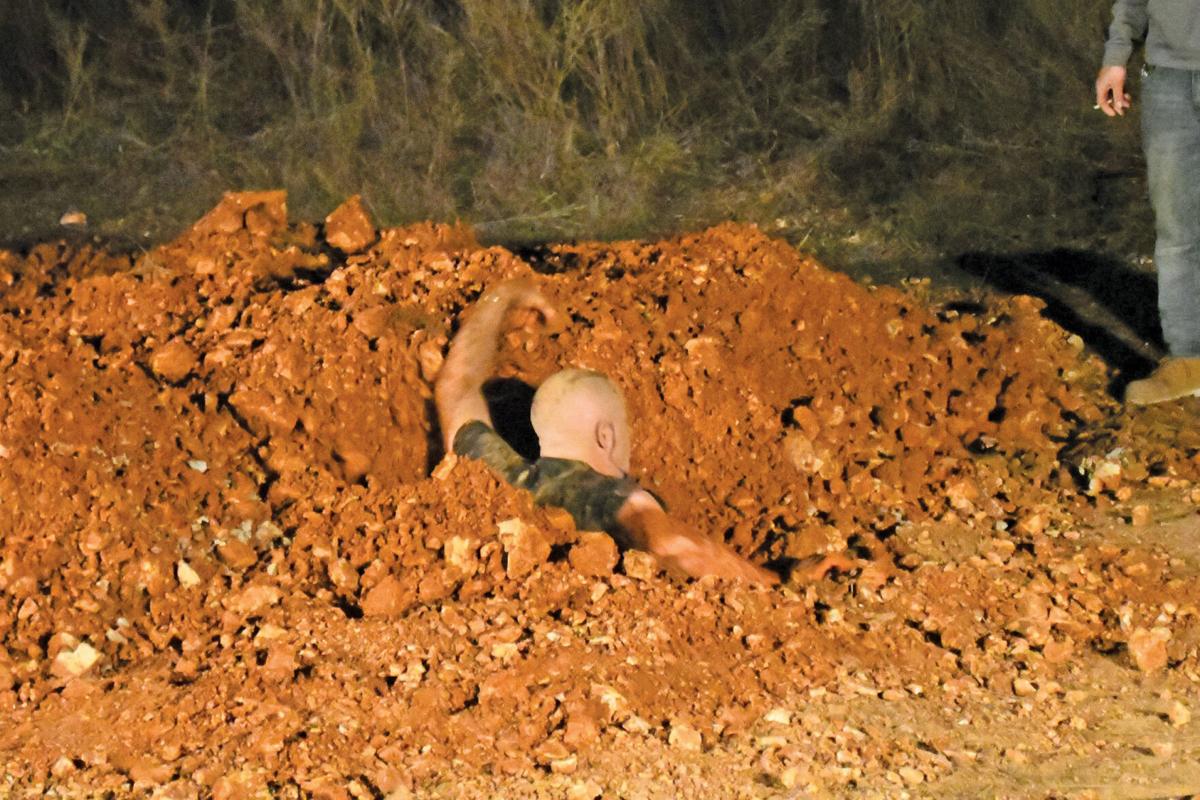 Phil Dalton pushes himself up out of hole where he spent 23 minutes after escaping being buried alive. 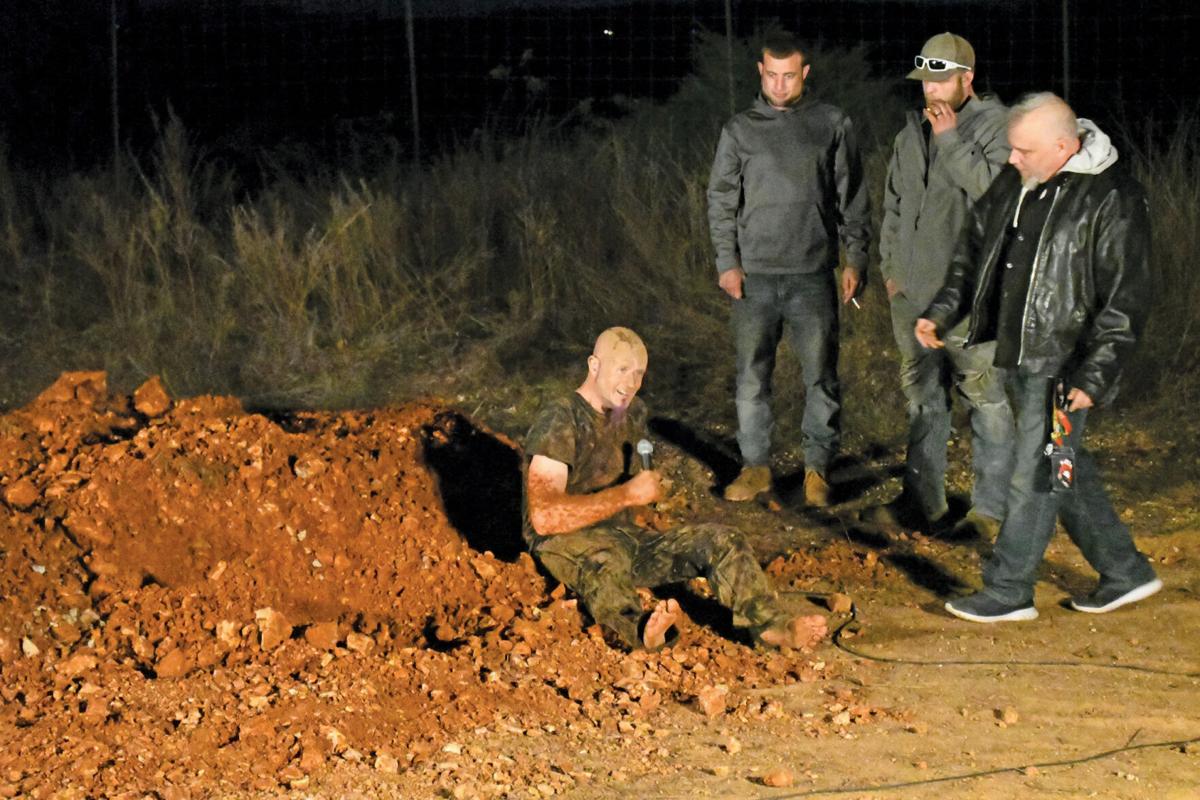 Dalton visits with the crowd after emerging. 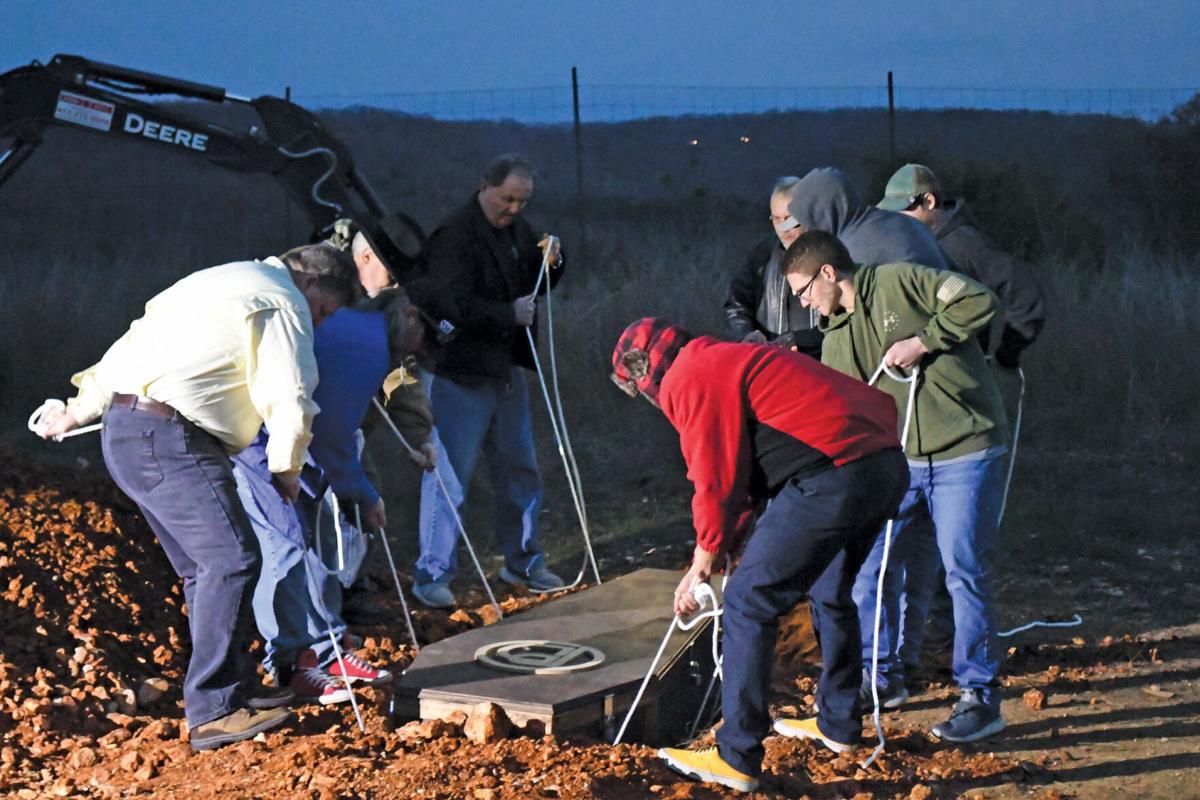 Dalton prepares to climb into his coffin as audience members surround him to help lower him into the ground.

Phil Dalton pushes himself up out of hole where he spent 23 minutes after escaping being buried alive.

Dalton visits with the crowd after emerging.

Like a scene from a horror movie, his hand broke through the earth only moments after being buried six-feet underground.

Branson Illusionist Phil Dalton set a new world record on Saturday, Nov. 20, after being buried alive and escaping, for the third time, in just over 23 minutes time. The special event, which was held on the grounds of Branson’s Haunted Screampark in Branson West, was well attended by both locals and tourists eager to bear witness Dalton’s attempt to escape being buried alive.

Attendees were invited to investigate the coffin Dalton was to be locked in and the six-feet deep hole he was to be buried in at the beginning of the event. After a brief welcome from Dalton, he climbed into his coffin barefoot and was then handcuffed before laying down inside. With assistance from eight members of the audience the coffin was closed, padlocked shut and then lowered with ropes into the pre-dug grave.

Once inside the hole, the bulldozer on site began to fill it in with the clay, dirt and rocks that had been dug out earlier that day. After the hole had been filled, a timer on a large television began counting up.

This was not Dalton’s first attempt at such an escape. In 2010 and again in 2012 the illusionist successfully escaped being buried alive. During the 2012 attempt, it took Dalton 19 minutes to escape. As the 22 minute mark passed by, the atmosphere at the event shifted from excitement to nervousness as the crowd began to question Dalton’s return from beneath the ground.

Moments later the mound of dirt piled on top of the once six-feet deep hole began to shake as Dalton’s right hand pushed its way through the ground and toward the sky. After pushing himself nearly halfway out of the hole, Dalton collapsed onto the dirt mound around him before motioning for assistance to pull him the rest of the way out of the earth.

Once fully emerged, the audience found the escape artist covered from head to toe in thick red clay. The handcuffs that once bound his hands had broken apart and now only hung to his left wrist.

Once topside and able, Dalton spoke to Branson Tri-Lakes News about his experience.

“The guys lowering the coffin, they did very good. Last time, one of the guys actually dropped one side and I got hung up in the hole. But the guys did a great job. I felt it kind of wiggle. I knew when we were going down, because you kinda feel it change levels. I knew when we settled on the ground, but they were gentle as could be,” Dalton said. “When the backhoe starts up you can hear that. You can hear the first little bit of dirt hit the coffin. After that, when they say silent as the grave, that is true. You can’t hear a thing. It is dead silent. It’s peaceful actually. Dark, peaceful, quiet. Very peaceful.”

As for his climb back to the surface, Dalton said compared to his other escapes, this time the ground was much heavier and sharp.

“I think I lost some blood here. It’s a lot of rock. The last two times I did this, one time was dirt and the other time it rained all day, so it was mud. This time it was more rock and clay. Lots of rock. Man that’s a lot of rock and they’re sharp. What did we take, 23 minutes? I was shooting for 20. I’ll take it,” Dalton said. “I feel pretty good actually. I think I ripped off part of a fingernail here, but I feel pretty good otherwise. I’m going to need a shower.”

Between the clay and the rocks, Dalton added he estimates there was between five to nine tons of earth on top of the coffin. He also thanked everyone for attending the event.

“I’m just honored folks came out to see what’s going on,” Dalton said. “Boy, just very blessed to do what we get to do. Truly.”

The buried alive escape was originally scheduled for Oct. 28, at the Branson Star Theater. However, the event had to be postponed after Dalton and his crew discovered they couldn’t dig down past a couple of feet due to a large sheet of bedrock lying beneath the theatre property.

A video of the final moments of Dalton’s escape can be found on the Branson Tri-Lakes News Facebook page.

For additional information search for the ‘Phil Dalton Theatre of Illusion’ page on Facebook or visit 50magicshows.com.