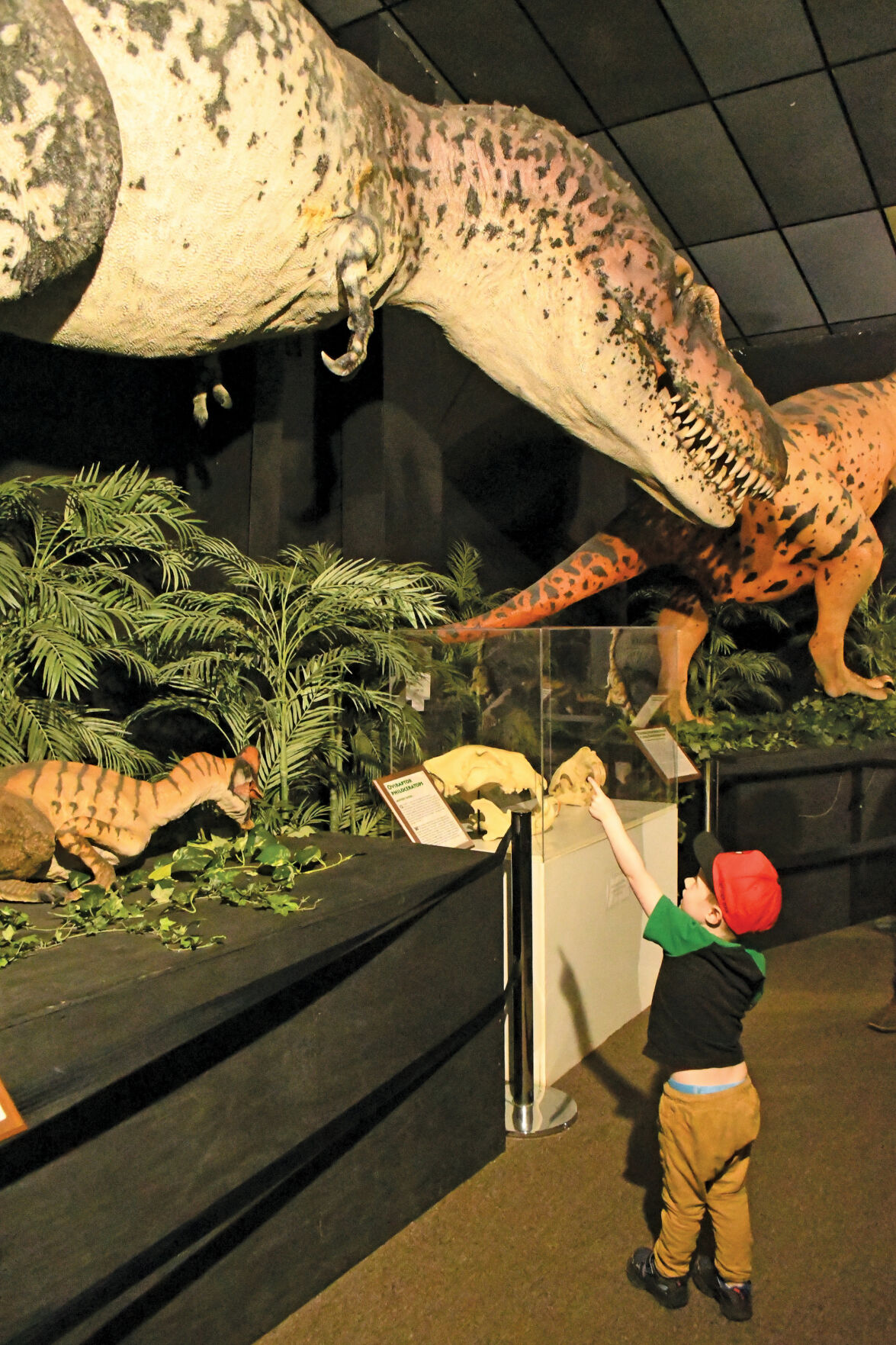 Levi Coursey of Tulsa, Oklahoma stares up at a sculpture of a Daspletosaurus at the Branson Dinosaur Museum. 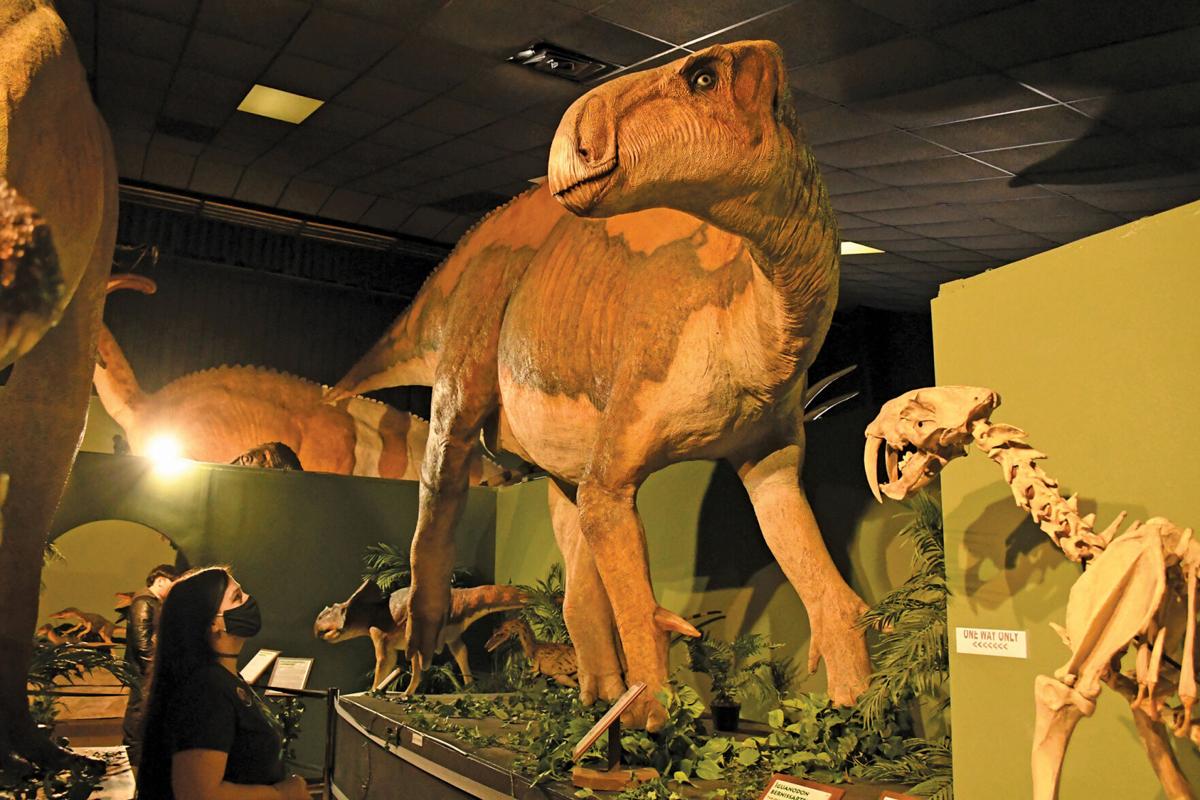 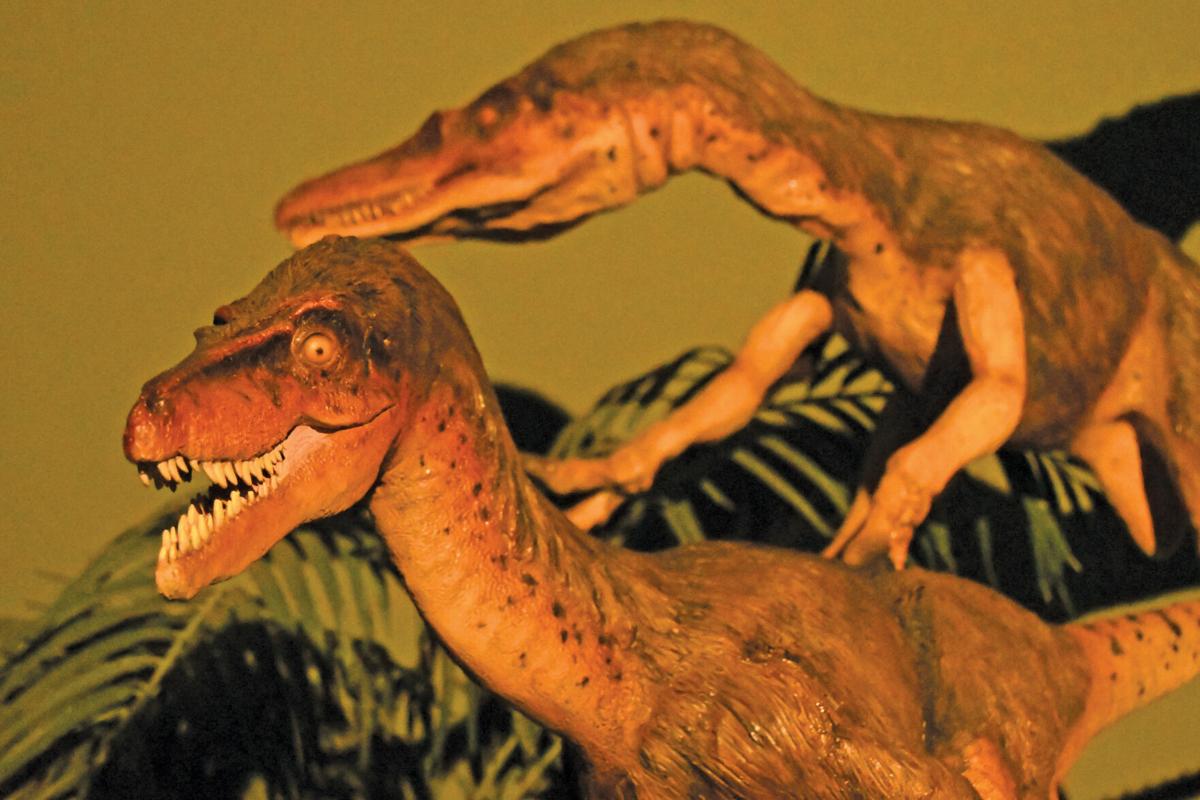 While actually much smaller than how they are portrayed in films, the Velociraptor were still powerful hunters. 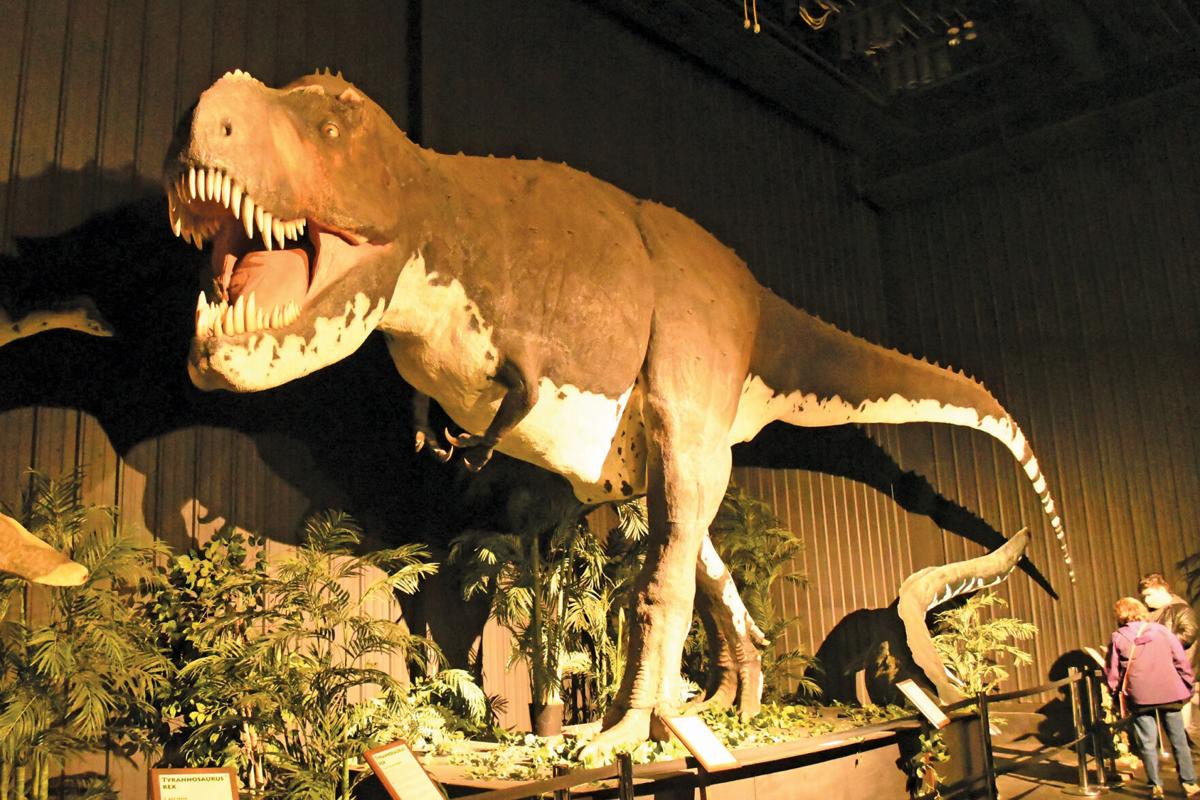 The Tyrannosaurus Rex is not only a huge dinosaur, but also had the strongest bite of any known animal. 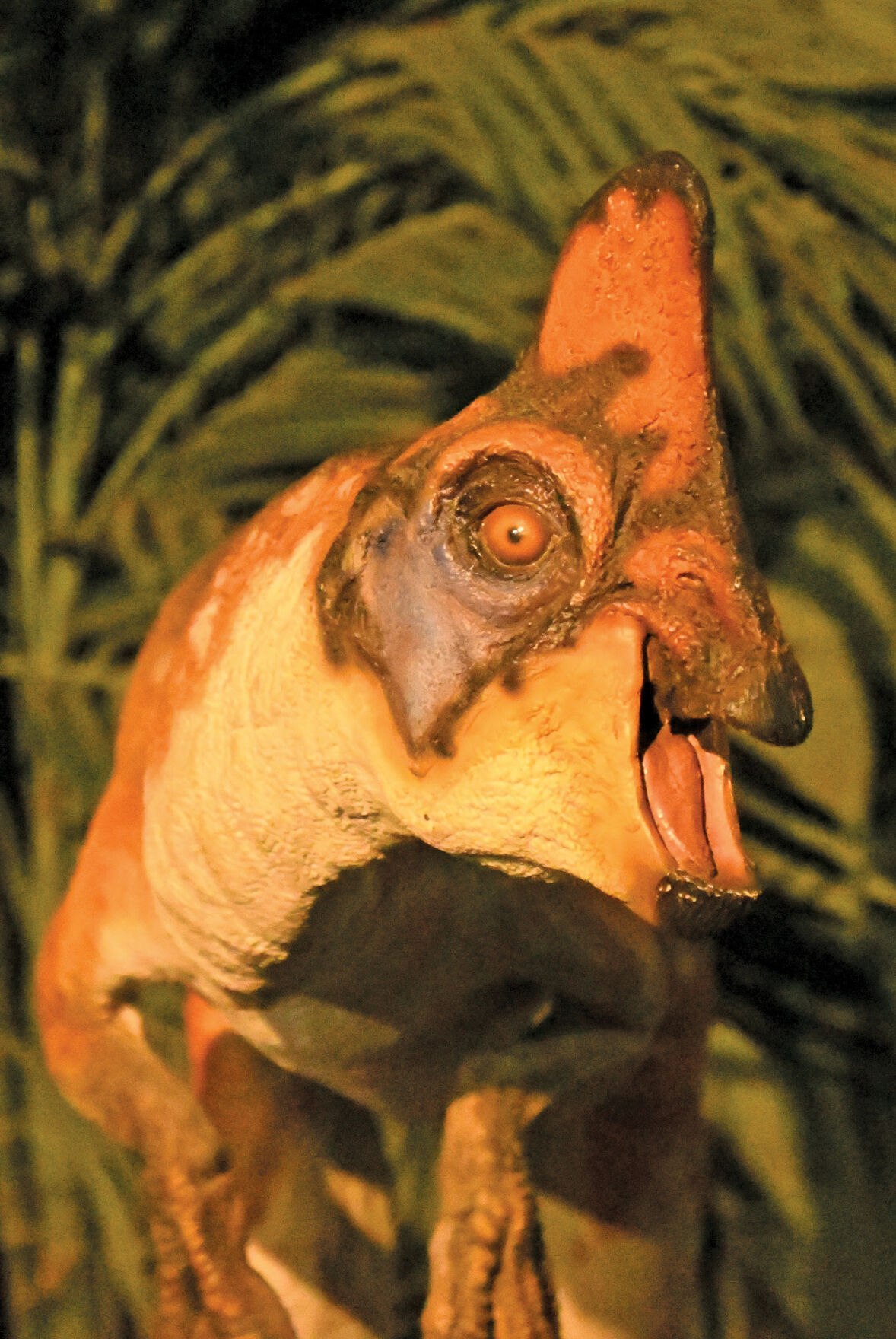 The Ingenia is an Oviraptorid like small theropod and could grow up to about four feet tall.

Levi Coursey of Tulsa, Oklahoma stares up at a sculpture of a Daspletosaurus at the Branson Dinosaur Museum.

While actually much smaller than how they are portrayed in films, the Velociraptor were still powerful hunters.

The Tyrannosaurus Rex is not only a huge dinosaur, but also had the strongest bite of any known animal.

The Ingenia is an Oviraptorid like small theropod and could grow up to about four feet tall.

One Branson attraction is giving folks the chance to travel back to a time when dinosaurs ruled the earth.

The Branson Dinosaur Museum provides an educational experience for people of all ages as they have the chance to get up close and personal with the nearly 50 life-sized dinosaurs the museum features.

The dinosaur sculptures seen at the museum were created by Fred Hoppe, the owner of the museum, and his son Jack. Branson Dinosaur Museum Sales Associate and Dinosaur Lady Christy Menear said that both Fred and Jack have a passion for sculpting and creating things using their imagination.

“They decided they’re going to make sculptors and they just had a love for dinosaurs and it just seemed to fit,” said Menear. “Almost 10 years ago they decided to bring dinosaurs down and put them in Branson. They were originally a part of the Branson Wild World and they had the option to have a bigger space to have more dinosaurs and so they moved over here about six years ago.”

Menear explained that their goal at the museum is to teach people about all the different types of dinosaurs.

“Whenever they come here they can expect to have the family experience of going through a museum and bonding together over dinosaurs,” said Menear. “We have just statues, not animatronics. We do have placards set up for everybody so they can read about the dinosaurs.”

Menear added to further the experience, they also offers guests the chance to have some additional fun as they make their way through the museum.

“We have a scavenger hunt to help them interact with our museum, as well as a quiz. So we’ll quiz them on each of the displays as they go through. They don’t have to do the quiz or the scavenger hunt, it’s just something fun,” said Menear. “For the scavenger hunt, if they can locate all ten of our golden fossils we give them 10% off in the gift shop. It’s also just something fun for the family to do together and sometimes they like to compete with each other on who’s going to find them first. It’s really cool. Some of them don’t want to leave. They’re here for hours.”

As guests visit each of the dinosaur exhibits, Menear said folks should expect to be familiar with some of the dinosaurs, but there are some they may be seeing for the first time.

“Some of them are very recognizable from the Stegosaurus and even the Allosaurus is recognizable. Of course we have the Tyrannosaurus Rex. Then there are others they may not recognize. To me, I’m super glad that they get to experience and they get to see a Daspletosaurus, they get to see an Oviraptor,” said Menear. “From the Stegosaurus to the Iguanodon. Not many people know about the Iguanodon and that’s actually starting to come back as a popular dinosaur again, which makes me excited because he’s one of my favorites.”

One thing guests often point out is some of the dinosaurs in the museum don’t look exactly as they saw them in a movie or in a series. One example is the Dilophosaurus, which is featured in the film Jurassic Park and probably best known for being the dinosaur that attacks InGen employee Dennis Nedry. While in the movie the Dilophosaurus is a smaller dinosaur, and features the abilities to spit venom and expand a neck frill, that just wasn’t the case for the real dinosaur.

“The Dilophosaurus that we have is actually scientifically accurate. However, the ones that they show in the movies are slightly different,” said Menear. “Then there are others, where they see the Pharselaosaurus, they think Ducky (The Land Before Time) being little and tiny. Then when they see this huge massive hadrosaur they’re like ‘That’s not Ducky.’”

Menear shared the children’s television shows and movies such as “Dinosaur Train” have done a great job of transitioning children from seeing the more accurate cartoon versions of the dinosaurs to what they’ll see in the museum.

“People, they like to come back, because they really like the chance to find more fossils if they didn’t have them all the first time. Also we let them keep their fossil hunt if they want to come back, so they don’t have to find them again, but they can still use that 10% off when they come back here,” said Menear. “Sometimes a kid will come back with something they want to know about. So that’s really super exciting. Unlimited times around the museum. They can go back in and keep finding those fossils. We’ll give them as many clues as they need, so they can find those fossils. We absolutely love that.”

The museum also offers a special rate to families that homeschool their children who visit the attraction for a field trip. Menear shared they also provide homeschool families with a special educational packet that the students, and parents if they’d like, can complete while making their way through the museum.

“All ages are welcome here. We cater to everybody and everybody loves it,” said Menear. “If you’re afraid of dinosaurs, don’t be. They’re not animatronic. They’re not going to get you. I promise. They’re actually rather gentle creatures.”

Inside the museum there is also a small screening room with theatre seating that plays the BBC television miniseries “Walking with Dinosaurs,” which people can stop and enjoy during their tour.

The museum is open seven days a week and 364 days a year. Hours for the museum vary by season. For additional information and for current museum hours visit bransondinosaurmuseum.com or visit their Branson Dinosaur Museum page on Facebook.