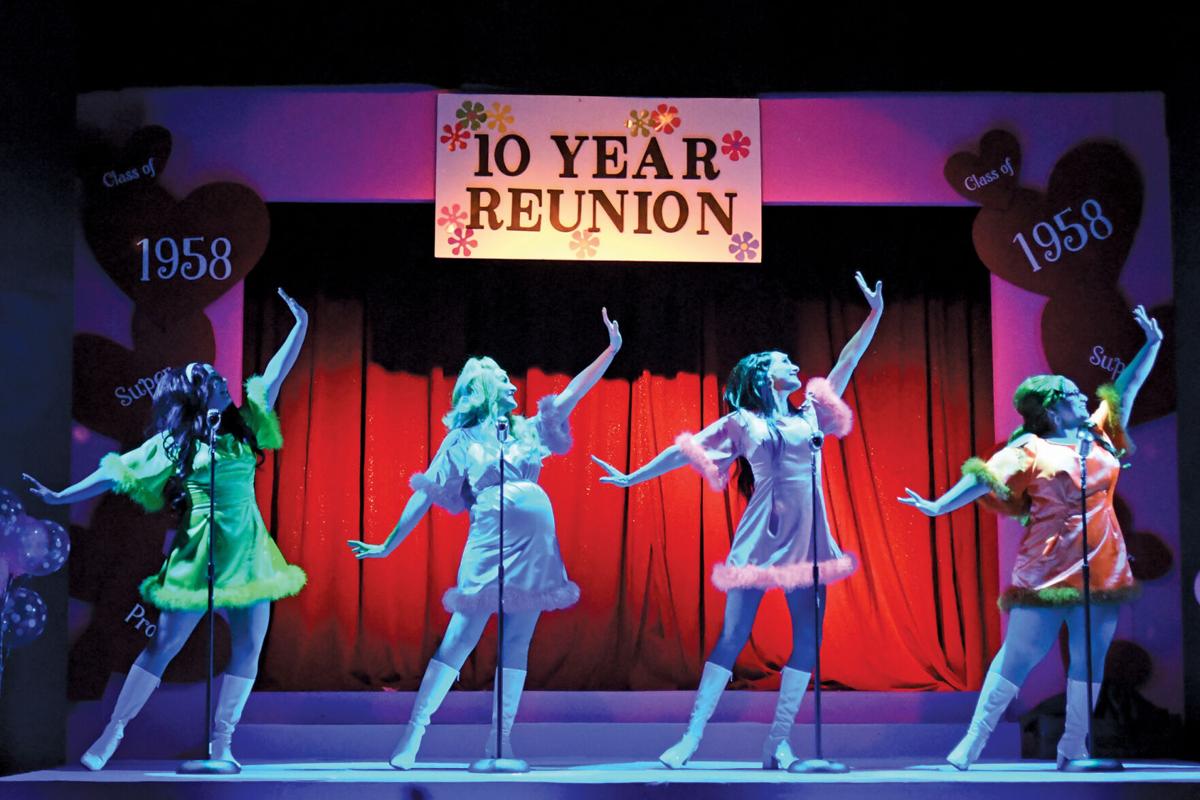 “The Marvelous Wonderettes” is now showing at the Historic Owen Theatre in Downtown Branson with eight more shows leading up to Sunday, Feb. 14. 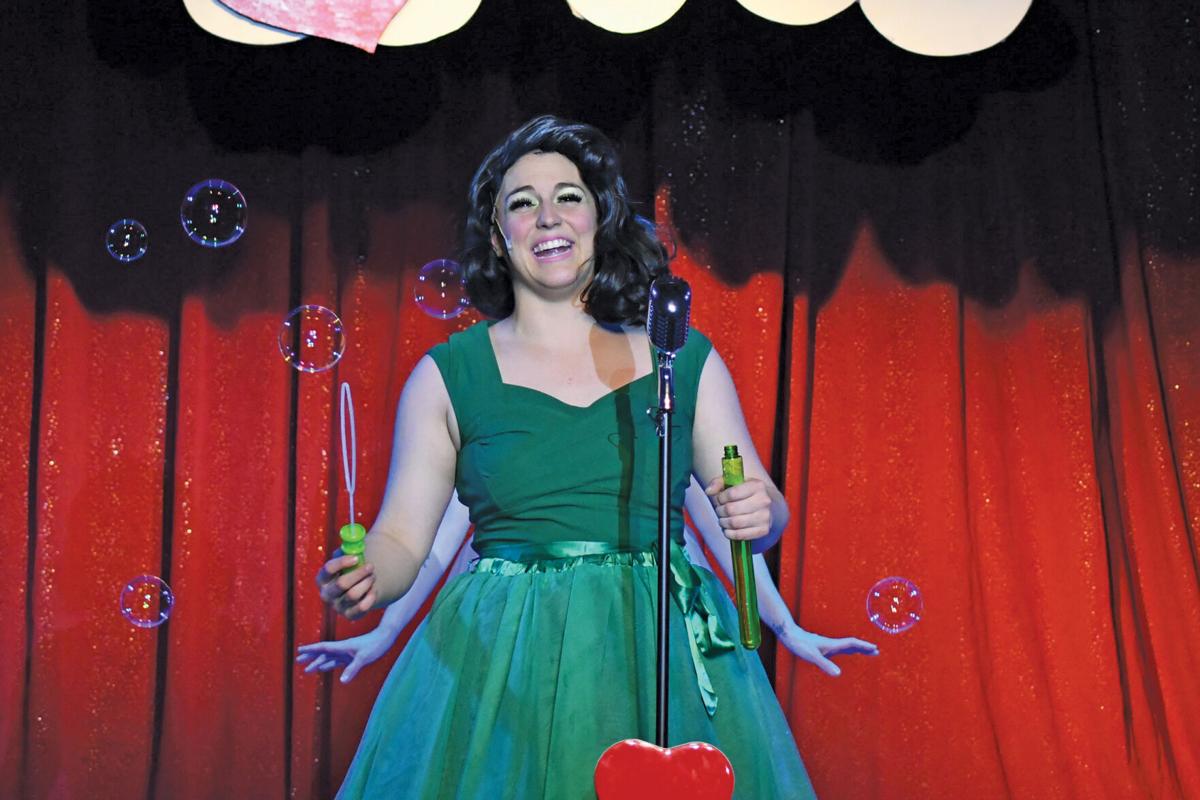 Caitlin Secrest introduces some bubbles into the middle of a Wonderettes performance before taking center stage. 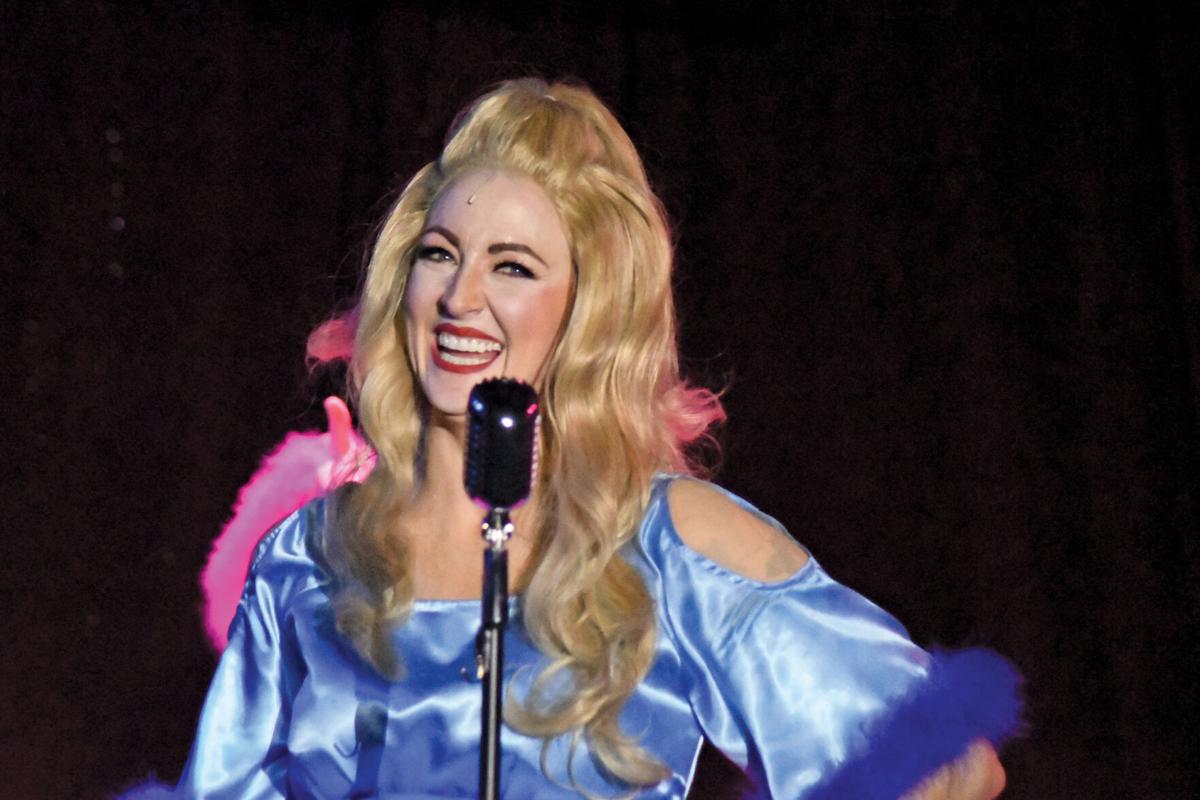 Macy Watts as Missy Miller performs a selection from the 1960’s at her 10-year high school class reunion. 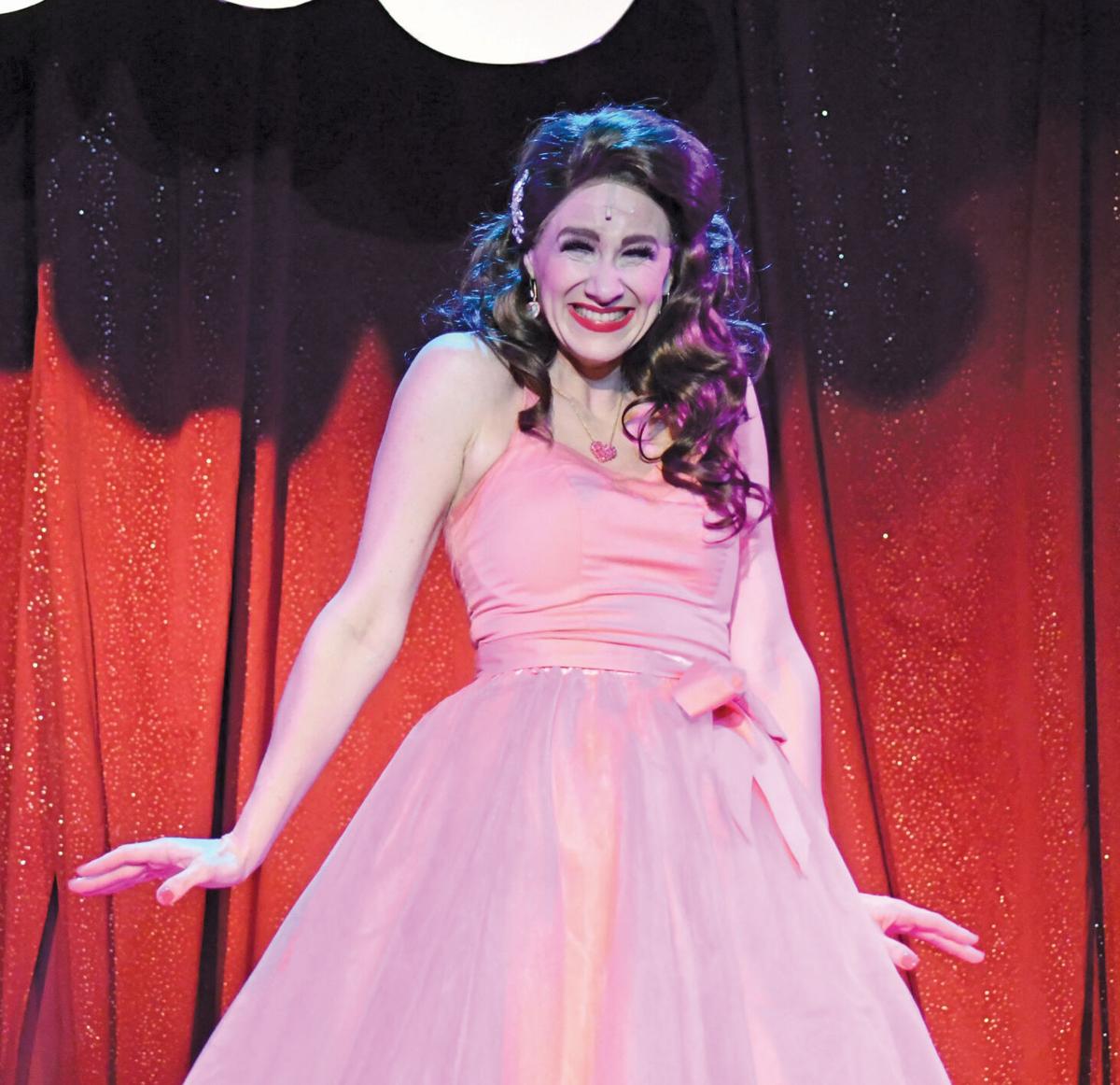 Mesa Mitchell as Cindy Lou Huffington gets a little giddy while singing a song to her crush during the prom. 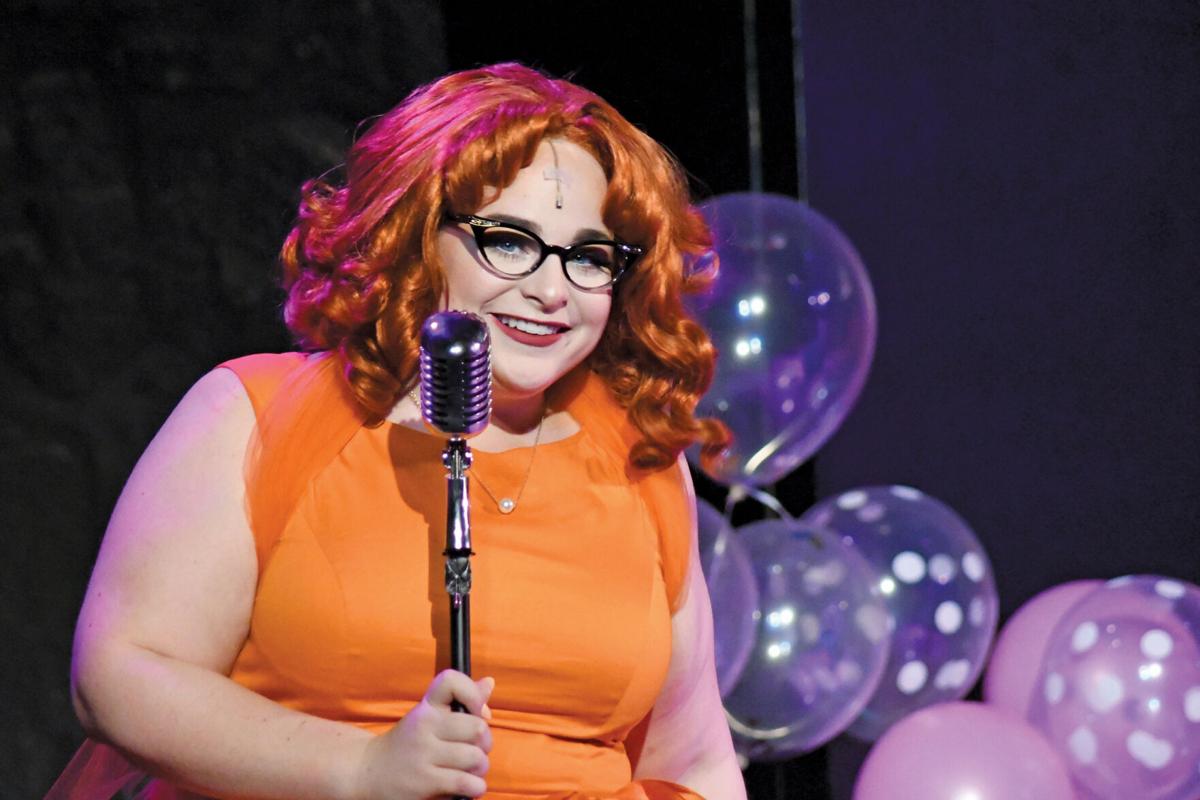 Tami Cooper as Suzy Simpson peaks around her microphone as she sings her song to her surprising crush. 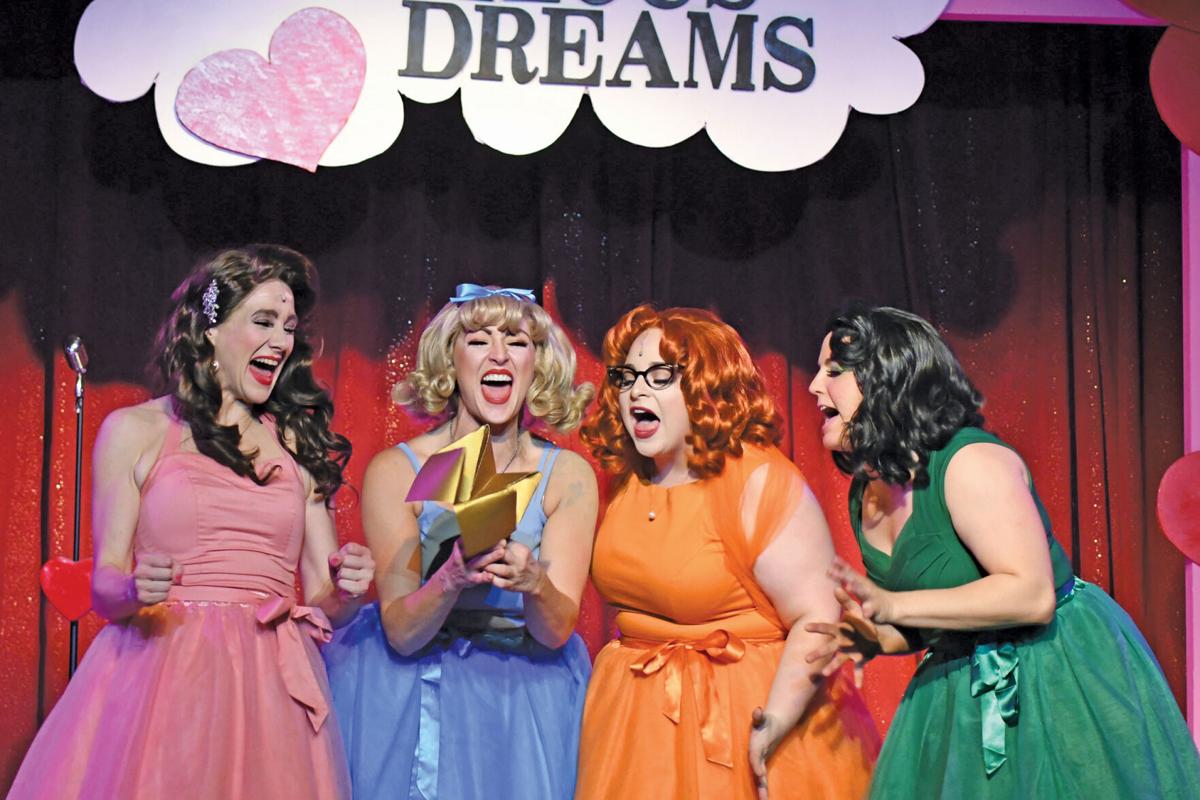 The Wonderettes perform a fun tradition to determine who gets to sing a song about their love/crush next. 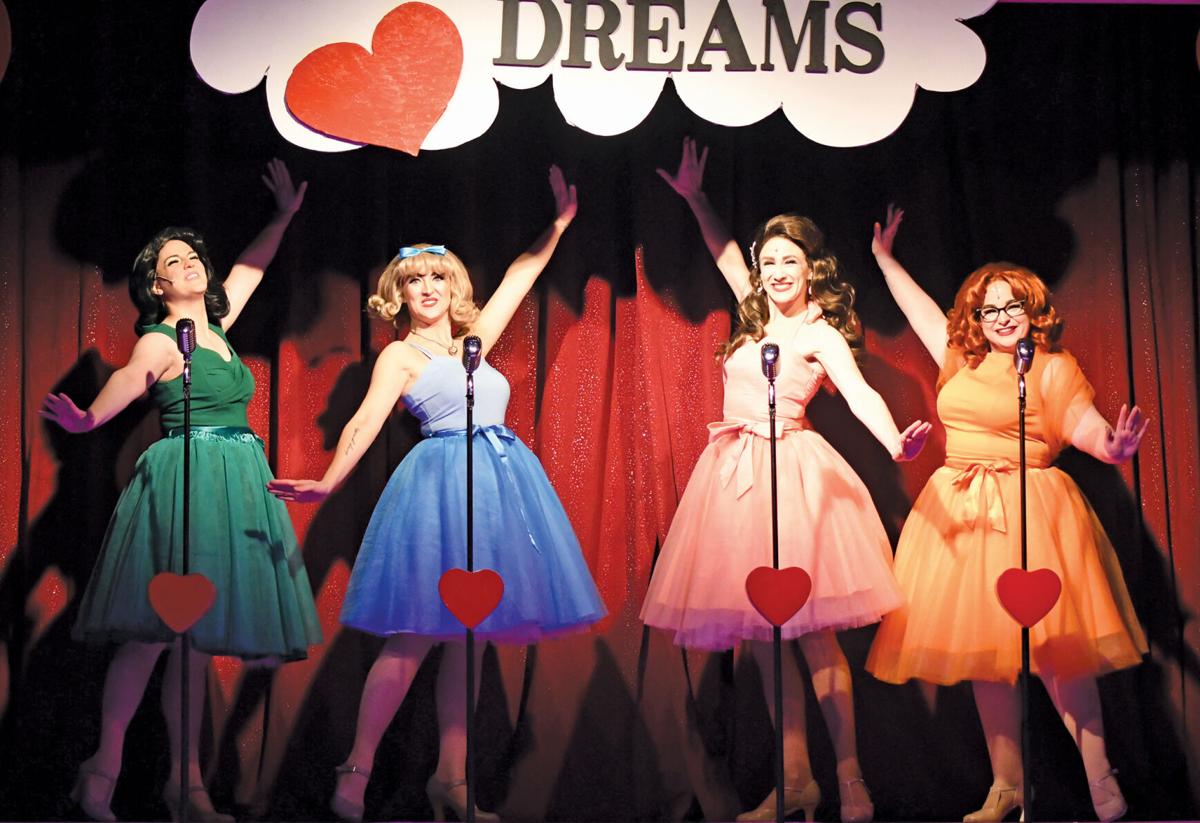 “The Marvelous Wonderettes” pose at the end of a song during their 1958 Springfield High School Prom.

“The Marvelous Wonderettes” is now showing at the Historic Owen Theatre in Downtown Branson with eight more shows leading up to Sunday, Feb. 14.

Caitlin Secrest introduces some bubbles into the middle of a Wonderettes performance before taking center stage.

Macy Watts as Missy Miller performs a selection from the 1960’s at her 10-year high school class reunion.

Mesa Mitchell as Cindy Lou Huffington gets a little giddy while singing a song to her crush during the prom.

Tami Cooper as Suzy Simpson peaks around her microphone as she sings her song to her surprising crush.

The Wonderettes perform a fun tradition to determine who gets to sing a song about their love/crush next.

“The Marvelous Wonderettes” pose at the end of a song during their 1958 Springfield High School Prom.

The Branson Regional Arts Council invites folks to take a trip back in time to experience the 1950’s and 60’s with “The Marvelous Wonderettes.”

On Thursday, Jan. 28, “The Marvelous Wonderettes” hosted the first of 12 performances at the Historic Owen Theatre in downtown Branson. When the musical begins, audience members will find themselves joining Springfield High School Seniors Missy Miller, Cindy Lou Huffington, Betty Jean Reynolds and Tami Cooper, aka “The Marvelous Wonderettes,” at their senior prom in 1958.

“The story follows four women who are in high school in the 1950’s and they are performing at their senior prom,” said Director Jacob Estes. “So Act I deals with a lot of things that everyone deals with in high school. So teenage drama and boy issues. Then in Act II it’s their 10 year reunion and they are performing there. It’s the same group of girls and it’s them as women now, so it’s showing their stories now and how they have grown and matured into new people, and it shows their new stories and how they’ve changed since high school.”

Estes said the Wonderettes song choices for the prom and reunion will reflect the time period of the musical.

“The whole show is a jukebox musical, so it incorporates songs from the 1950’s and 60’s,” Estes said. “You’ll hear a lot of your favorites like ‘Lollipop’ and ‘Sandman’ for Act 1 and then for Act II you’ll hear things like ‘Heatwave’ and ‘Son of a Preacher Man.’”

Some additional song selections will include “Dream Lover” “I Only Want To Be With You” “It’s My Party” “Rescue Me” “Respect” “You Don’t Own Me” and many more.

“So we have four super talented professionals who are doing the show. They all come from a performance background here in Branson and other areas,” said Estes. “You have Cindy Lou Huffington, and she’s like the diva of the group. She’s the one that wants to be prom queen and is always the one kind of stirring the pot a little bit and causing some issues … And she’s played by Mesa Mitchell, who is just an incredible performer in town and she does an incredible job. Then we have Betty Jean Reynolds is the second character. She is the tomboy of the group and kind of the class clown. She likes to have fun and likes to sometimes cause some mischief and play practical jokes on the other girls during their songs. That character is played by Caitlin Secrest. She does an incredible job and brings that character to life so wonderfully. She embodies that character.”

The Wonderettes also feature the talents of Macy Watts as Missy Miller and Tami Cooper as Suzy Simpson.

“Then we have Missy Miller, and she is kind of the leader of the group. She’s the one who keeps everyone in line. She’s the one who keeps the show going. Basically if she wasn’t there, everything would fall apart. She’s the organized one and the very smart one,” said Estes. “Suzy (Simpson) is your all-American sweetheart. She’s kind of the last to be filled in on the joke. She’s very ditzy and very innocent is a good word to describe Suzy. She doesn’t always know what’s going on, but she’s always there to have a good time and be part of the group. She’s played by Tami Cooper and she does an incredible job as well. All four of these women just embody these characters. I’m transformed to the 1950’s and 60’s every rehearsal, and it’s just so fun to watch. I can’t wait for the audience to get to experience this.”

As “The Marvelous Wonderettes” is the first production of 2021 for the BRAC, and one of only a handful of BRAC productions to happen since the start of the pandemic, Estes shared there have been a few challenges.

“We want safety for everyone involved and that’s our No. 1 priority. So during the audition process, initially everything was virtual. Once we kind of narrowed it down we finally brought the girls in and had a socially distanced, masked rehearsal process, which has been a new challenge to overcome. But we’ve all done it with a smile on our face just because we’ve been able to do some live theatre again, which has just been incredible.”

Estes explained that since the show only has four characters, it was an excellent choice for a musical at this point.

“With it being a smaller cast, it was a perfect opportunity to take advantage of it during the pandemic. We were able to be really safe during our rehearsal process. We’re also going to have those same kind of safety protocols during the show as well. I’m really excited we were able to do some live theatre during all this,” Estes said. “It’s been great. We are excited to get to do this thing, because it’s been a long time since a lot of these people we’re able to perform in front of an audience like this.”

Even though there are only four characters on stage during the show, Estes said that for this production there are technically five roles.

“‘The Marvelous Wonderettes’ is a show where the audience is another character. The audience is involved from the point they walk in, to the second they leave,” said Estes. “The audience is the prom chaperones and the other prom guests. So they are just as much a part of the story as the four girls on stage. There is no fourth wall in this show. The show is very fun. I don’t want to give a lot away. Just wait and see.”

“The Marvelous Wonderettes” isn’t Estes’ first experience on stage. Locally, he directed the Staccato Show Choir and has both performed in and directed productions at Silver Dollar City, The Welk Resort, The Sight and Sound Theatre and other BRAC productions.

For this production, Estes said he wanted to look inside each of the characters and help the cast members bring them to life.

“I’ve really tried to find the heart behind each of these people and their characters and how they would be in real life. I tried to ground everything in realism, so it all plays really naturally in front of the audience, because this story encompasses the entire audience as well as the four girls on stage,” Estes said. “So we want everything to read as authentic as possible. When you arrive we want you to feel like you’re at the 1950s prom and then the 1960’s 10 year reunion.”

Due to the pandemic, all seating in the Owen Theatre is socially distanced. The maximum capacity of the theatre has been reduced by approximately 25%, so advance reservations are encouraged.