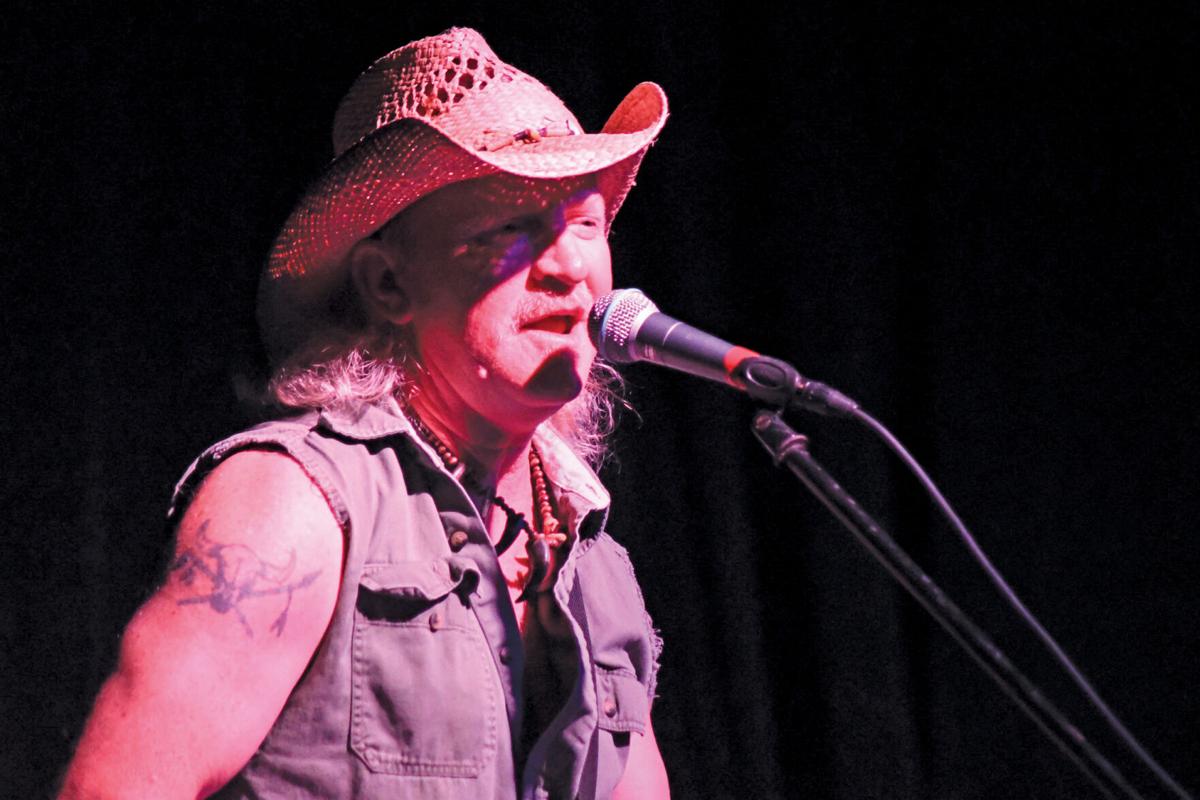 Wild Man Pebo Wilson performs his song “Barn Burns Down” during his show at the Branson Star Theater. 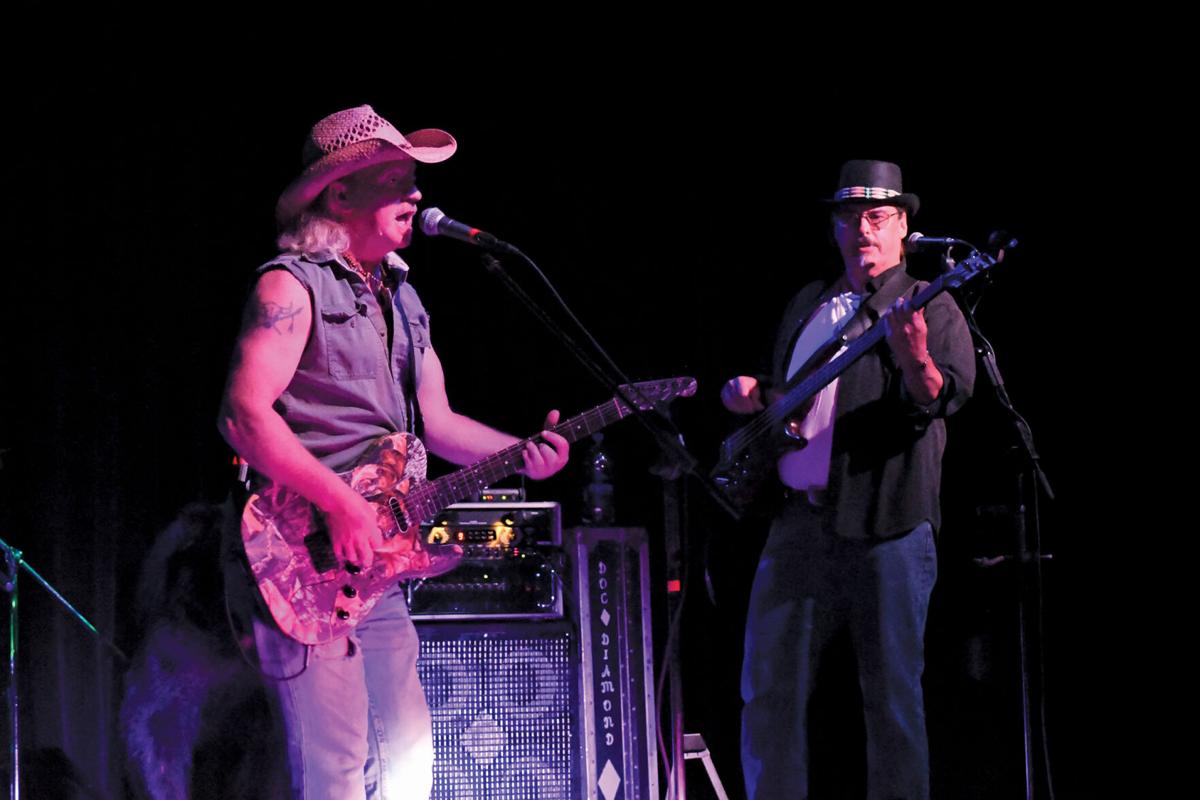 Bassist Doc Diamond plays along with Wild Man Pebo Wilson as he performs a country song. 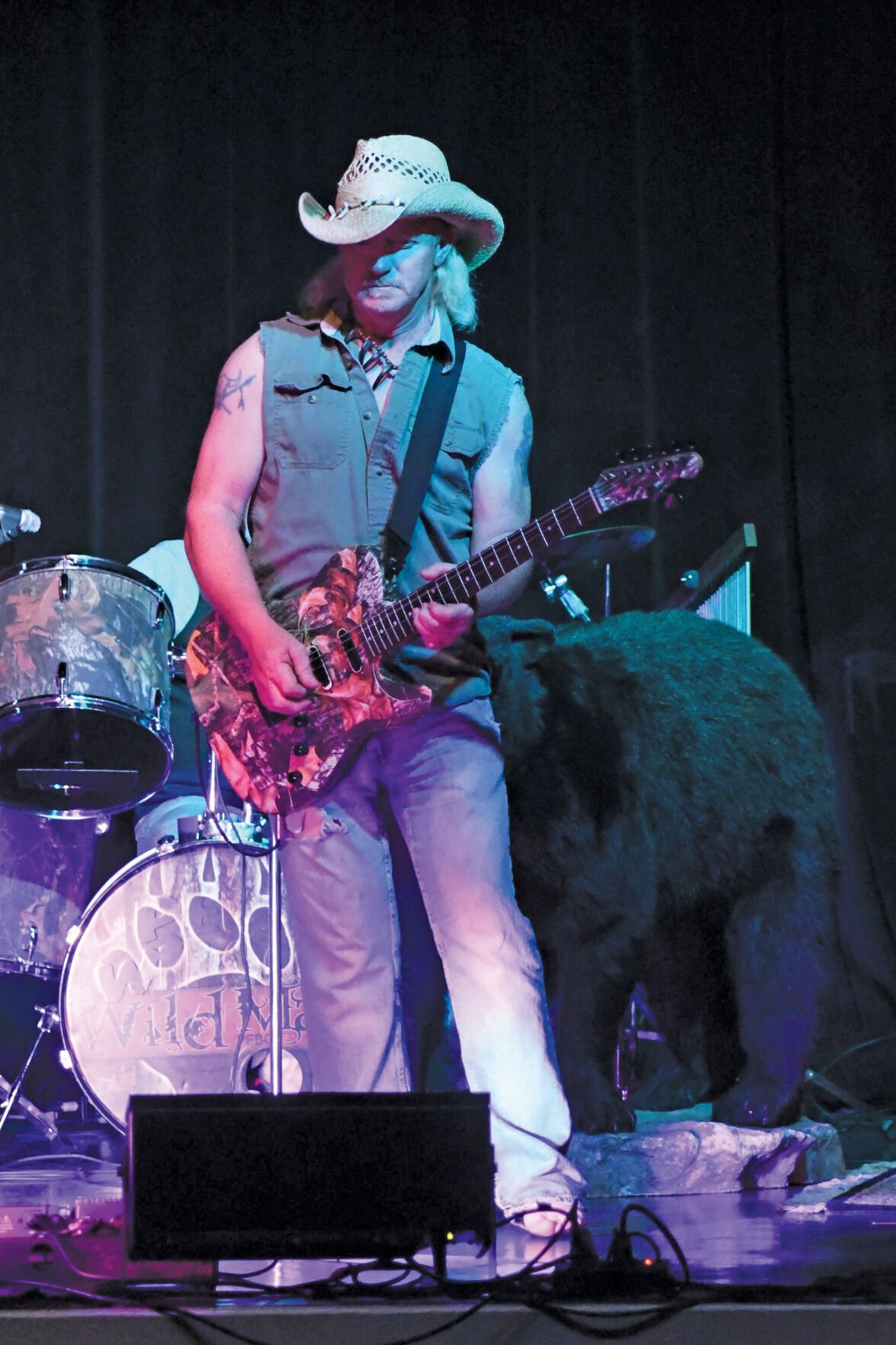 Wild Man Pebo Wilson lives up to his name as he performs barefoot on stage with his stuffed bear. 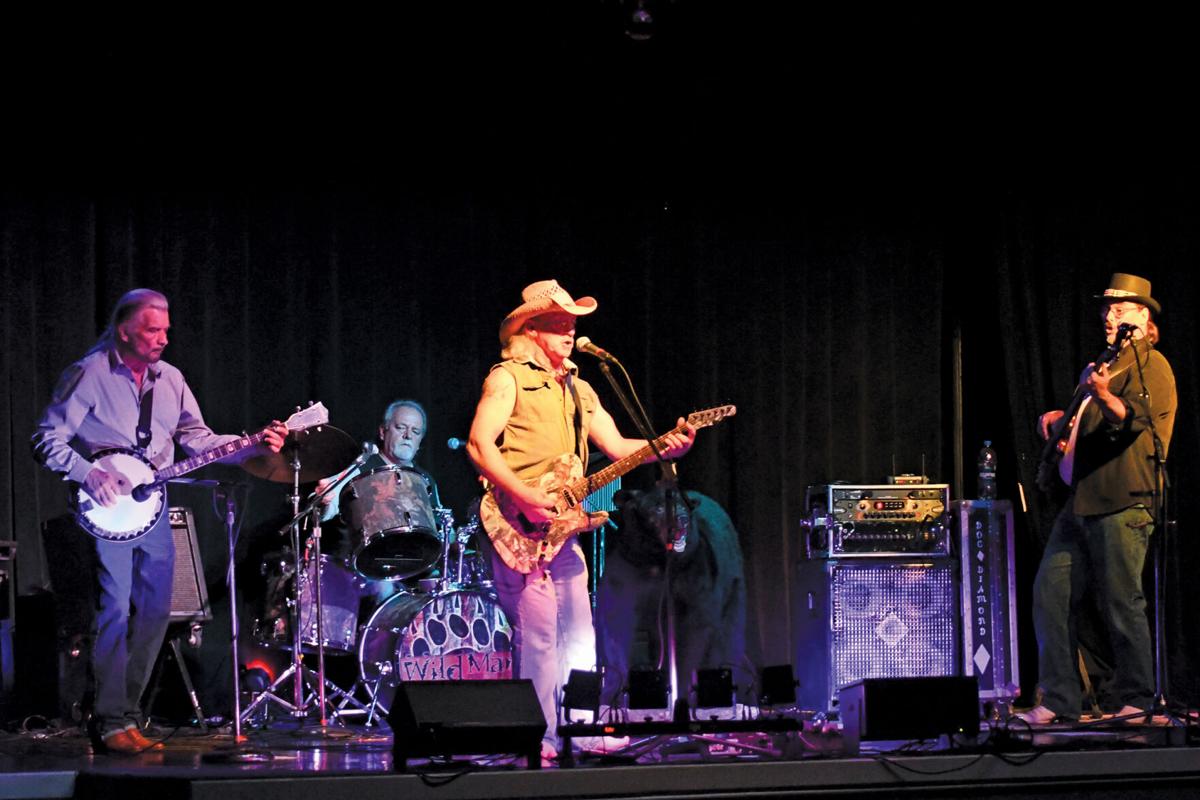 Wild Man Pebo Wilson currently plays every other Saturday at the Branson Star Theater and offers shows at 2 and 10:30 p.m.

Wild Man Pebo Wilson performs his song “Barn Burns Down” during his show at the Branson Star Theater.

Bassist Doc Diamond plays along with Wild Man Pebo Wilson as he performs a country song.

Wild Man Pebo Wilson lives up to his name as he performs barefoot on stage with his stuffed bear.

Wild Man Pebo Wilson currently plays every other Saturday at the Branson Star Theater and offers shows at 2 and 10:30 p.m.

The Branson music scene is being taken to the next level as Wild Man Pebo Wilson has joined the Branson Star Theater for a new show this season.

Wilson is the 2019 International Male Vocalist of the Year and a multi-award winning Nashville recording artist. Known for his exciting and explosive high energy shows, Wilson is looking to bring his own musical twist to Branson.

Wilson got his start in music playing at honky-tonks when he was just a teenager. Now, when not in Branson, Wilson can be found touring the country at a variety of venues. Wilson said when he got serious about his music and started writing his own lyrics, things took a turn for the better around 2015.

“We had a song called ‘Barn Burns Down.’ A guy sent it to multiplatinum Producer Kevin DeClue. (Kevin) said he was in his office, and he plays demos and stuff for other people, so he put that in the CD player to play,” Wilson said. “Then people started getting up out of their cubicles looking all around saying, ‘Who the hell is that?’ This is out in L.A. He said he knew then he had to get ahold of me.”

DeClue then traveled to Nashville to meet up with Wilson at a studio.

“We actually got to go in and do the actual recording of (the song) and that song has opened a lot of things,” Wilson said. “Kevin became my producer and he’s pushing a lot of things. We’ve had a lot of hit writers that we wrote with; I mean the best in the world and all. They don’t get to be multiplatinum and quadruple-platinum by being dumb or not good at what they do, so I surround myself with people like that and it’s worked out for me. Everything’s moving on up.”

As Wilson has begun to rise in popularity, he’s not forgotten those who are helping him make it happen.

“The mom and pop radio stations are what’s helped me out a lot. They play whatever they want to play. The major labels don’t control them. That’s what’s pushed me so much to where I was able to get out and do it for a living,” Wilson said. “That’s why I try and help them out with benefits if they ask.”

When asked how he found his way to Branson, Wilson said that was due to the consistent actions of a local resident.

“That would be Robert Brim. He had been on me for two years to come here and play. I sort of didn’t feel like the theater type, because I had done a theater before in Pigeon Forge,” Wilson said. “You’ve got to do the same show and I’m not into doing the same show and doing the same stuff. I know like over 1,000 songs and I’ve got five albums of my own … It took a little convincing, but he talked me into it.”

Wilson added that he received some really great advice from some other Branson entertainers that led him to want to come and make an impact in Branson.

“I had a couple of guys from Mickey Gilley’s band and Johnny Lee’s, they reached out to me like a month before we started this. They told me, ‘Everything’s crazy. It’s going to be rough getting everything rowing. It’s going to take probably three years to get going.’ He said, ‘We think you’re ahead of the game with what you do and you’re writing and all, but you’re probably going to offend a lot of people.’  And I have,” Wilson said with a chuckle.

Compared to his outdoor shows, which often involve lots of fire, explosions and even a cage for the drummer, Wilson’s Branson performances have been turned down a notch. However, Wilson still comes out barefoot and brings a taxidermied bear with him to sit on stage.

“I held back a little bit here, but I’m fixing to break that out. I don’t care. I got into doing things like that. I set guitars on fire and I don’t set them on fire to watch them burn. That ain’t no use to me, so I make sure I’m playing them. They’ve got to stay in tune for at least 93 seconds,” Wilson said. “I blow fire or spit it. Whatever you want to call it. I do balls of fire like that. Sometimes you just get in a mood, and it’s my equipment, so I’ll bust it up. I put guitars through amps. Whatever to keep people smiling.”

Since he began performing in Branson earlier this season, Wilson said he’s enjoyed his time with the Branson Star Theater.

“It’s a real nice place and of course Stevie Lee Woods, he’s been good to us by inviting us over and all,” Wilson said. “We just got to get those people in here and let them be the judge on the music. That’s what I’m here for is the music; to push the music. I can do a sit down, go acoustic and get intimate with it or we can go all out with explosions, fire and whatever we need to do. We can do a rock show. It don’t matter. I always try to do it by looking at what crowds there are.”

Currently Wilson is performing in Branson every other Saturday, with his next shows scheduled for June 19 at 2 and 10:30 p.m.

“We’ve got so many more shows we’re doing from here to the east coast and down in Florida, so that’s the reason I’m only playing here every other weekend,” Wilson said. “I can’t really stop doing other stuff and just play here five nights a week. I can’t do that and push the music too. I understand you got your theater performers, but I’m not a true theater performer. I’m just a singer/songwriter who’s just putting the music out there.”

When not on stage, Wilson can be found in the woods hunting big game.

“I hunt bears and things like that. I’ll run them with the dogs and I’ll run them on foot. I don’t ride around and shoot. I want the adrenaline rush out of it. Sometimes they’ll run into a hole on me, so I’ll go in and get them. I keep my knife with me. You don’t want to try and shoot no rifle inside a hole. It will deafen you, it’s so loud,” Wilson said. “You go in with the dogs. You sort of squeeze yourself in with the dogs. You just sort of feel around, because you ain’t got no light, so you just feel around until you find fur. You can hear the popping of the teeth going on, but once you find them and get them, then the adrenaline rush kicks in. There’s no drug that’s going to get anybody higher than things like that.”

Wilson shared that he’s got several projects in the works outside of music that he hopes folks will tune in for.

“We’re getting our own hunting channel going. We got our YouTube channel with a lot of things like that,” Wilson said. “Then a couple of movies so far. I got one fixing to come out at any time called ‘Sherwood.’ These are thrillers. Also spoiler alert, I’ve died a couple of times so far. I’ve killed, but I’ve also died. I got another one that will be coming out that I’ve got a part in called ‘West Haven’ with David Lopez.”

Joining Wilson on stage for his performances in Branson are Guitarist Robert Brim, Bassist Doc Diamond and Drummer Gary Moates. Wilson and his Branson band perform inside of the little theater at the Branson Star Theater.

“I have kicked doors open and I keep them open everywhere we go,” Wilson said. “Some like it, some don’t. I think that’s with everything. You can’t please everybody, but I try.”

For additional information or to reserve tickets visit bransonstartheater.com or follow the ‘Wild Man Pebo Wilson’ page on Facebook.