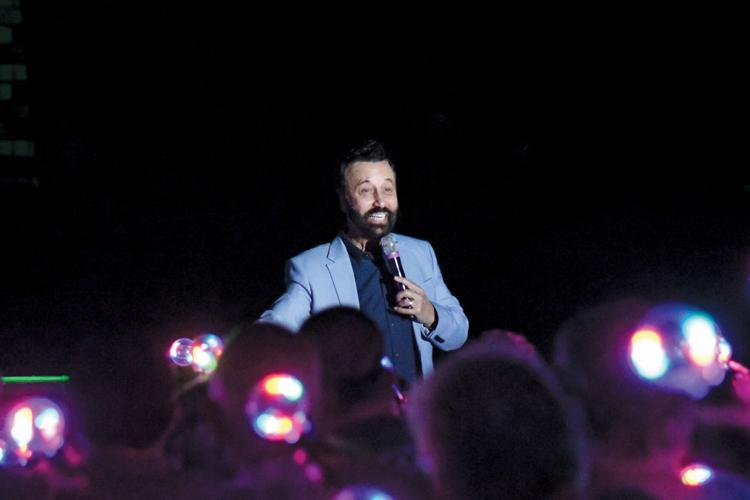 Comedian Yakov Smirnoff is performing at his theatre in Branson this fall on select dates through Nov. 18. 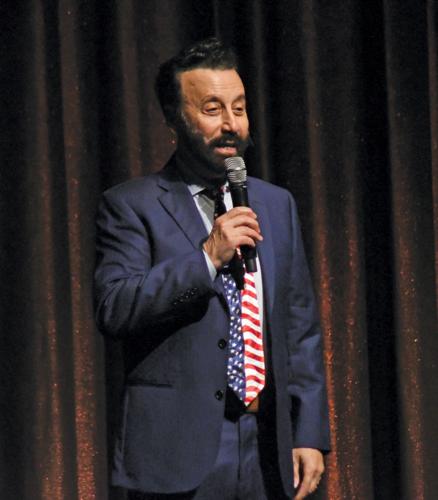 During his show, Yakov shares stories from his life, starting from when he was a young boy living in Russia.

Yakov Smirnoff gave his audience much more than just a wonderful afternoon of comedy this fall. 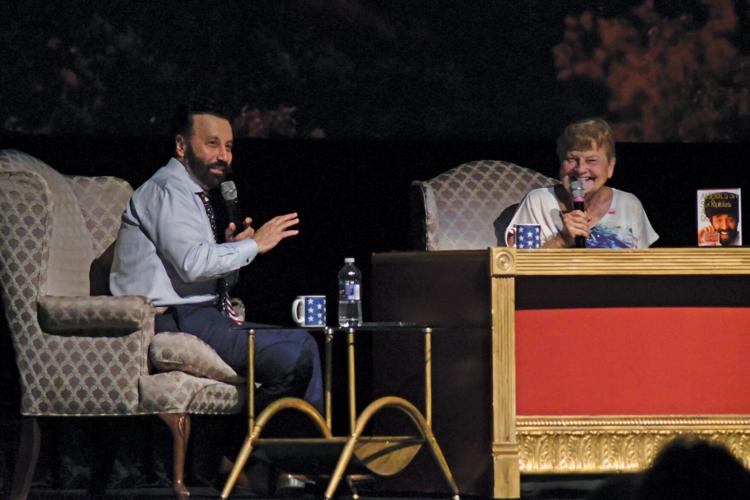 In a special segment of the show, Yakov brought audience member Sally onto the stage to interview him during his mock live television show Branson Live. 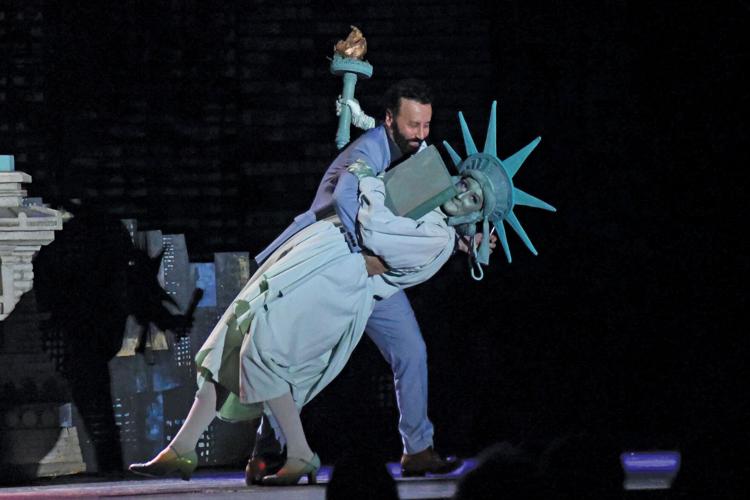 Joined on stage by Lady Liberty, Yakov dips her during a dance routine while he sings to her. 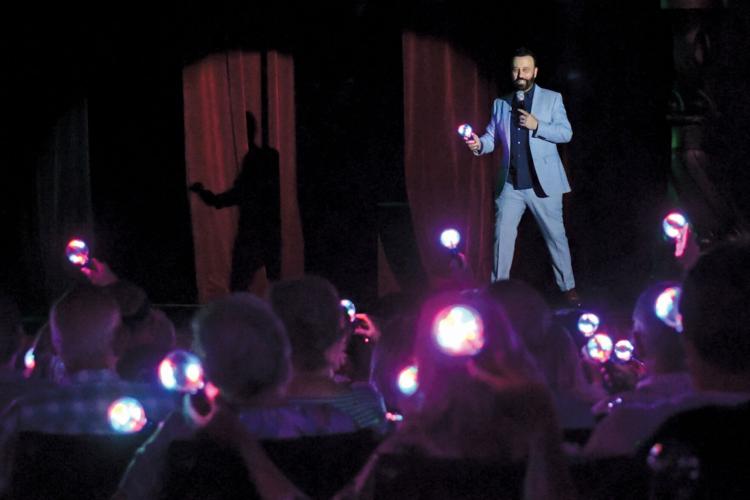 As a part of the finale of his show, Yakov invites the audience to light up colorful orbs stationed at each chair.

Comedian Yakov Smirnoff is performing at his theatre in Branson this fall on select dates through Nov. 18.

During his show, Yakov shares stories from his life, starting from when he was a young boy living in Russia.

Yakov Smirnoff gave his audience much more than just a wonderful afternoon of comedy this fall.

In a special segment of the show, Yakov brought audience member Sally onto the stage to interview him during his mock live television show Branson Live.

Joined on stage by Lady Liberty, Yakov dips her during a dance routine while he sings to her.

As a part of the finale of his show, Yakov invites the audience to light up colorful orbs stationed at each chair.

Comedian Yakov Smirnoff is back in Branson for the next two months as he presents his 2022 season show ‘United We Laugh.’

Opening on Sunday, Oct. 2, Smirnoff’s fall show provides audiences a balanced combination of jokes and stories from his life, starting from his time in Russia as a child through today.

“The show is called United We Laugh, so my goal is to not only make them laugh, but also teach them and explain to them how they can create more laughter in their lives,” Smirnoff said. “Laughter at this stage of the game, we always need it, but I feel that everybody is so up tight after COVID and now elections are coming up. For me, just come and laugh your Yak-Off. Forget the world out there for a moment and yet be inspired and be touched and laugh to make your life better. That is what I’m hoping they will get out of this.”

In his show, Smirnoff breaks down the walls between him on the stage and the audience below by sharing personal and sometimes intimate stories from his life. Smirnoff said though he is a comedian, he’s been blessed with the ability to include personal pieces with the audience and it not be a challenge.

“I feel like what you see is what you get with me. I will tell you similar stories that I will tell them or my friends and I think that is comedy,” Smirnoff said. “It’s like Shakespeare said, ‘Comedy is tragedy plus time.’ A lot of stories, that maybe were not funny at that time, then become much more so and you can look back and say I can laugh about that now. I don’t have many secrets. I just kind of share that.”

As a staple in Branson for nearly 30 years and a comedian known around the world for even longer, Smirnoff shared how his comedy has evolved over the years.

“I take whatever is happening in my life, so life changes all the time, right? If I got married, I would talk about that. My kids were growing up, I talked about that. I got divorced. I talked about that,” Smirnoff said. “Then I started dating again, then I got an education and started teaching. All of those thing kind of become a reflection of my life, so that’s why after you’ve finished watching the show, you see me. You’ll understand. You’ll have a portrait of me from the ‘70s, ‘80s, ‘90s, 2000s. You get my whole life.”

Anyone who has passed by or came inside of Smirnoff’s theater in recent weeks has probably noticed some changes to the property. As Smirnoff and his wife Olivia have now returned to Branson as full-time residents, they have been adamantly working to return the theater to its former glory.

“What we did and I’m excited about is here, we put a lot of energy into the theater. It shines and it’s how it used to be. Back then, I kind of let it go, but we’ve repaved the parking, we’ve got lights in the back, we’ve got this huge digital billboard going to be installed in mid-October, so that will attract more attention. That was my desire and my wife’s desire to kind of put more energy into this theater, because it’s hard to predict what happens outside Branson. Here at least I know the town, so I can kind of build on that.”

While his plan is to continue offering fall performances each year, Smirnoff said he wants to be able to use his theater to provide a place for any other productions looking for a home.

“I’m hoping I will have people who are interested in leasing the theater. I would still do my two months. I find this time, this audience relates to me much more. The kids don’t remember a lot of things I talk about, so that’s why I don’t do summer,” Smirnoff said. “I’m excited, but I also wanted to bring the theater to a level where Catherine the Great could be proud of me…I’m hoping I will attract some people who could use a bigger theater and can bring some more people in.”

Currently, the Yakov Smirnoff Theater is providing residency to The Duttons, who’s theater caught fire earlier this summer. Smirnoff shared having the family of entertainers joining him at the theater for the rest of the year has been a good opportunity for both parties.

“Lucky for The Duttons, I had space and lucky for me that they needed a place,” Smirnoff said. “They’re here and doing good business here, which is wonderful because some entertainers who might consider this place they’re going, ‘How are The Duttons going to do there?’ So it’s a good test for everybody.”

When he’s not on stage in Branson or touring around the world, Smirnoff has kept himself busy with a number of products, including a new book.

“I have several things. I’m writing a book on relationships and dating. A lot of my audience are married, but I find people who are dating are having challenges and they don’t know why. It’s because the world has changed so much in the past 70 or 80 years, you need an adjustment of the course,” Smirnoff said. “My comedy is when I joke about men, women, everybody enjoys that kind of humor. It makes them recognize themselves in this and laugh at this as opposed to fight over this.”

Smirnoff confirmed he is still working with Netflix on his documentary for the streaming service and he’s also started a new podcast called ‘The Yakov Smirnoff Podcast.’

“I’m doing a podcast and I have my first episode on YouTube, so they can see The Yakov Smirnoff Podcast. It was done with a young lady (Casey Poff,) in a conversation about relationships and it went really well,” Smirnoff said. “It got the attention of some people in Hollywood. A girl who is a comedian and she’s flying in on the 18th, so I’ll put her in my show for like a five minute segment. She’s from Russia and she’s got 150,000 followers. I thought maybe that would start something, so I’m going to do a podcast with her and then already lined up several other comedians who are single. I’m trying to focus on single people, so that’s what’s new.”

Showtimes for United We Laugh are at 2 p.m. on Sundays, Wednesdays and Fridays, through Friday, Nov. 18. The Yakov Smirnoff Theater is located at 470 State Hwy 248 in Branson.