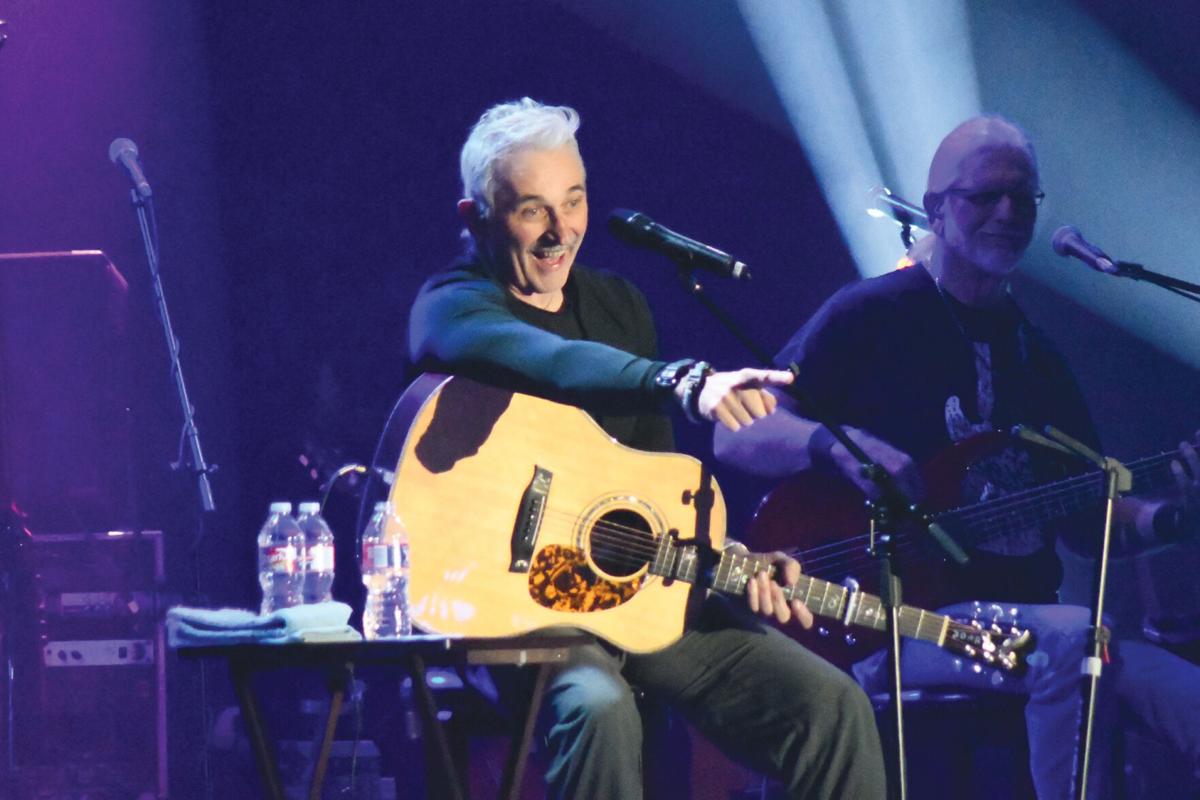 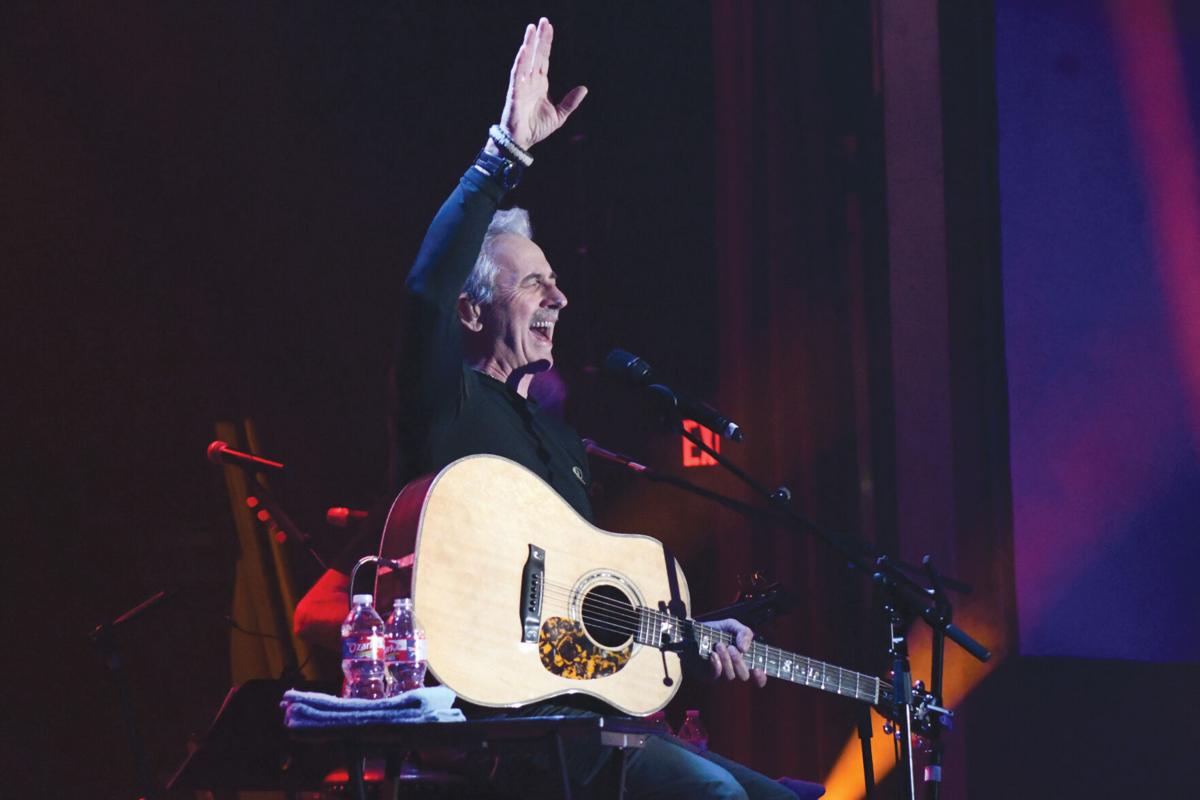 At the concert, Aaron Tippin performed many of his No. 1 hits including “Where the Stars and Stripes and Eagles Fly.” 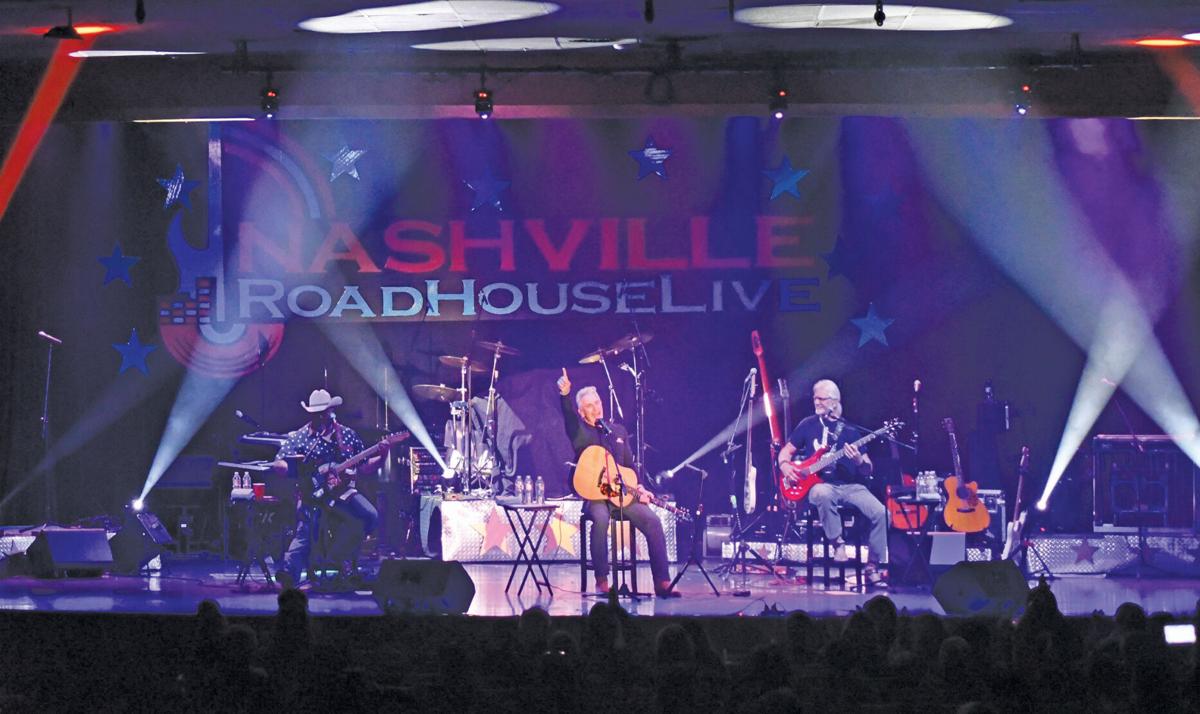 Aaron Tippin performed at the Branson Star Theatre as a part of the Nashville Roadhouse Live show. 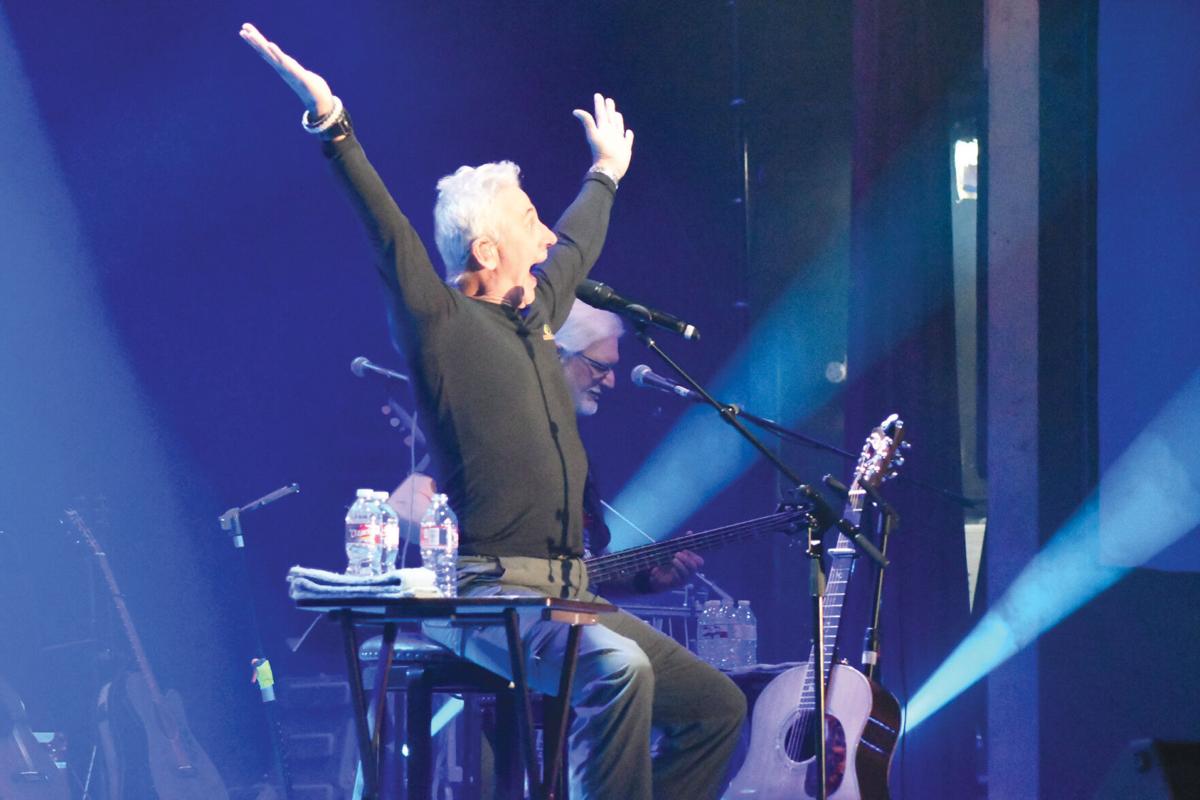 Aaron Tippin shared the story, as told by his late father, of how his dad learned his son had been born. 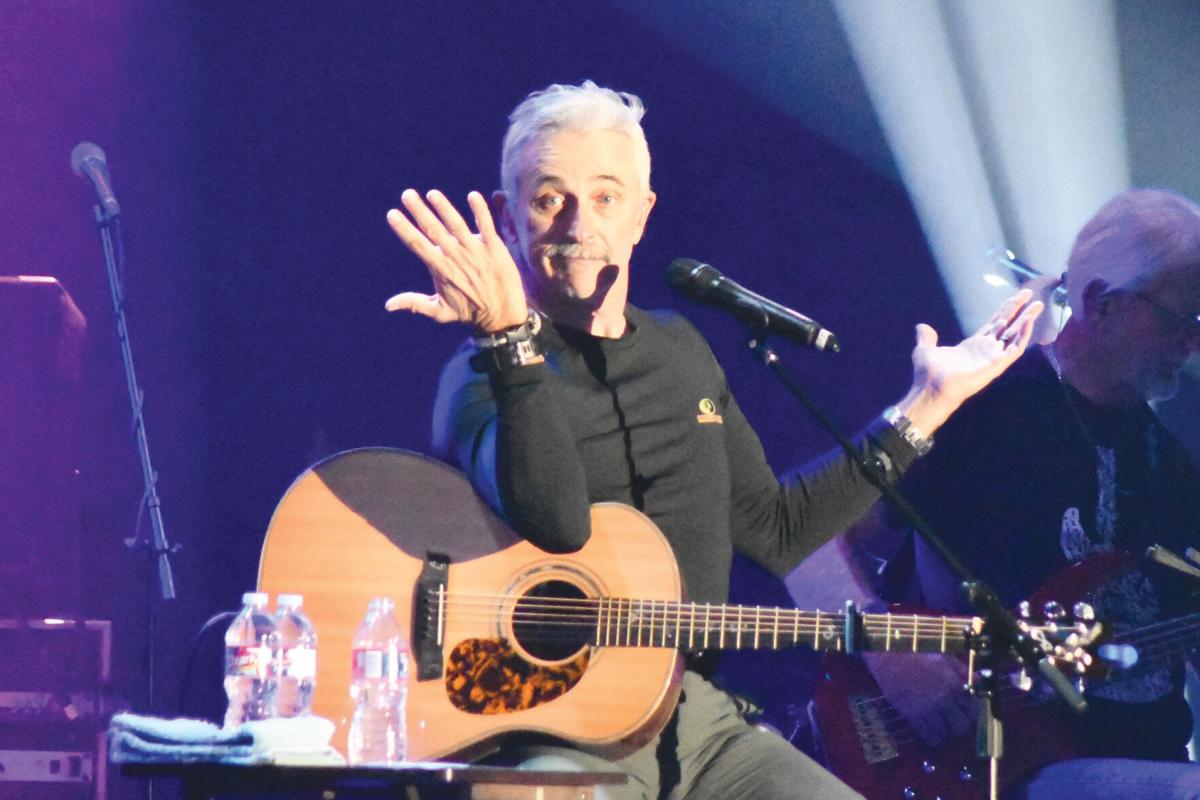 Aaron Tippin explains to the audience that he is the “Fred Sanford of country music.” 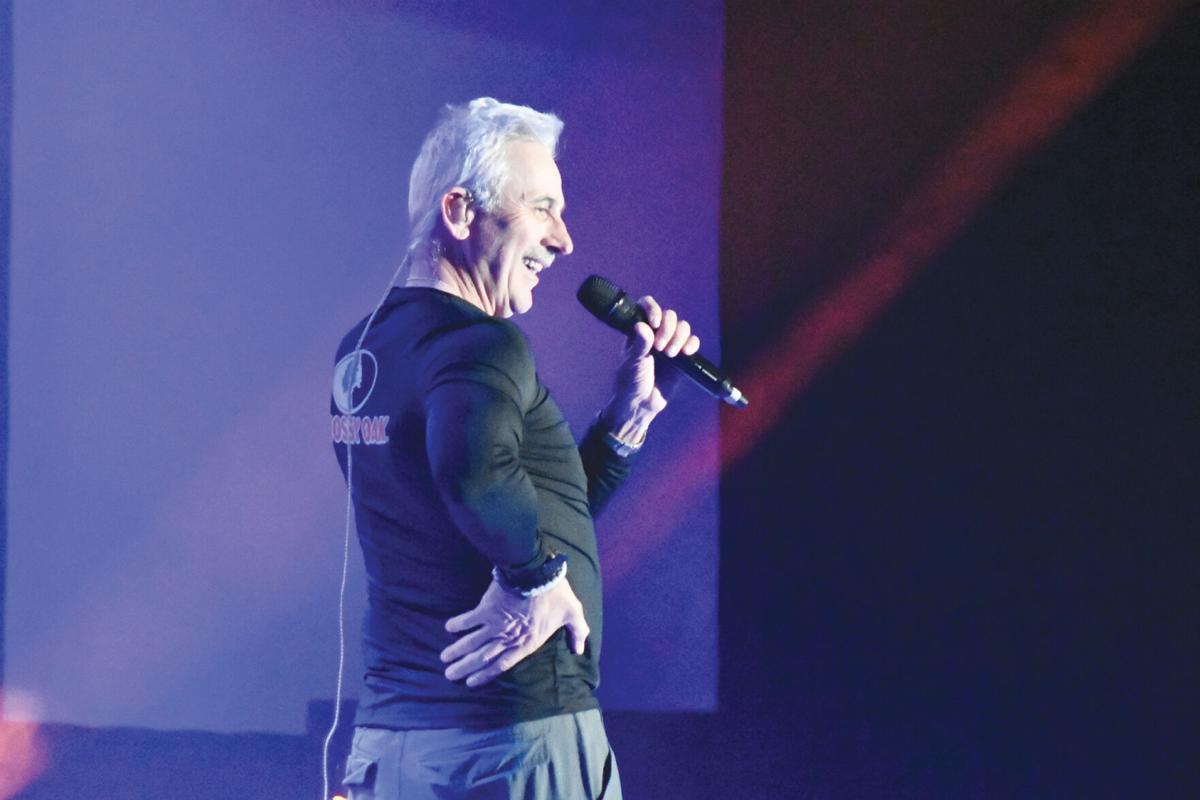 Aaron Tippin singing an encore performance of his song “Kiss This.”

At the concert, Aaron Tippin performed many of his No. 1 hits including “Where the Stars and Stripes and Eagles Fly.”

Aaron Tippin performed at the Branson Star Theatre as a part of the Nashville Roadhouse Live show.

Aaron Tippin shared the story, as told by his late father, of how his dad learned his son had been born.

Aaron Tippin explains to the audience that he is the “Fred Sanford of country music.”

Aaron Tippin singing an encore performance of his song “Kiss This.”

On Wednesday, Nov. 11, country music star Aaron Tippin was welcomed by a full crowd to the Branson Star Theatre for a Veterans Day concert.

Best known for his hits “You’ve Got to Stand For Something,” “Where the Stars and Stripes and the Eagle Fly,” “My Blue Angel,” Workin’ Man’s Ph.D” and “For You I Will,” Tippin has been a prominent part of the country music scene for more than three decades.

Tippin has seated more than thirty singles on the Billboard Hot Country Songs charts, including three number one hits: “There Ain’t Nothin’ Wrong with the Radio,” “That’s as Close as I’ll Get to Loving You,” and “Kiss This.” In addition, Tippin has released a total of nine studio albums and two compilations, which includes six gold certifications and one platinum certification.

The special appearance by Tippin at the Branson Star Theater is just one of many guest music artists scheduled to appear alongside Stevie Lee Woods and his show Nashville Roadhouse Live. Woods has announced that later this month, the Branson Star Theatre will also be rolling out the country music red carpet for Collin Raye and Wynonna Judd. (Be on the lookout in future editions for details on both those upcoming concerts.)

During the concert, Tippin not only sung most of hits No. 1 hits, but also gave attendees some back story on himself as well as how some of his favorite songs came to be. Towards the beginning of the show, Tippin gave folks a little insight into a little something about himself that many people don’t know.

“I, Aaron Tippin, I am the Fred Sanford of country music,” said Tippin as the Sanford and Sons theme song began to play. “And I ain’t kidding. What’s really funny is some of these young ones out here going, ‘Momma, whose’s Fred Sanford?’ I am the junk man of country music. It’s something I’m neither proud of or ashamed of, it’s just who I am.”

If anyone in the crowd were to ever go down to visit the Tippin Farm in Tennessee, Tippin explained they would be welcomed by junk tractors, junk trucks, backhoes, trackhoes, bulldozers and every power tool known to man.

Tippin shared that while riding around his junk yard one day in his Bad Boy Buggy with Buddy Brock, co-writer of “You Got to Stand for Something” and several other songs with Tippin, they were inspired to write the song “Big Boy Toys.”

“(Buddy) looked at me and said, ‘Tippin,’ he said, ‘You got more junk than anybody I’ve ever seen in my life’ and I said, ‘Thank ya.’ He said, ‘We ought to write a song about your junk.’ So we did,” said Tippin. “It’s never been a hit on the radio. The only reason I recorded this song is because it’s the Aaron Tippin theme song. And I guarantee you, all you all that’s been following ole A-A-Ron all these years, I guarantee you you’re going to remember a little tune called “Big Boy Toys.”

At the show Tippin also talked about his love for his fans and the legacy he hopes to leave behind with his music.

“I’ve been out here doing this 32 years. I’ve seen all kind of crowds. I seen everything from 10 people to 10,000, but the coolest thing I ever see now days is when I’m up here and I watch you all sing back those lyrics to these ole songs. It means the world to me,” said Tippin. “Most important than singing it, is the fact that I wrote it or were part of the writers, and that’s going to stay here forever. Even when ole Aaron Tippin’s gone, these songs will live on.”

“She said, ‘Sweetie, the other night when all those stories were being told, I realize you were in a moment of grief, but I heard them.’ She said, ‘What you don’t realize is your dad didn’t just inspire you in life, your dad inspired everybody he met in life.’ I realized she was right and we sat down and we wrote another song about my dad. Even though all the songs I told you about represent my dad, this song absolutely describes my dad. It’s a little tune called ‘He Believed.’”

At the end of the Tippin concert the crowd demanded an encore performance. Tippin responded in tune and came back out on stage and performed two of his biggest hits “Where the Stars and Stripes and the Eagle Fly” and “Kiss This.”

After a short intermission, the crowd was treated to a performance from Stevie Lee Woods and the Nashville Roadhouse band, Ric Steel and Elvis Tribute Artist Daniel Jenkins.