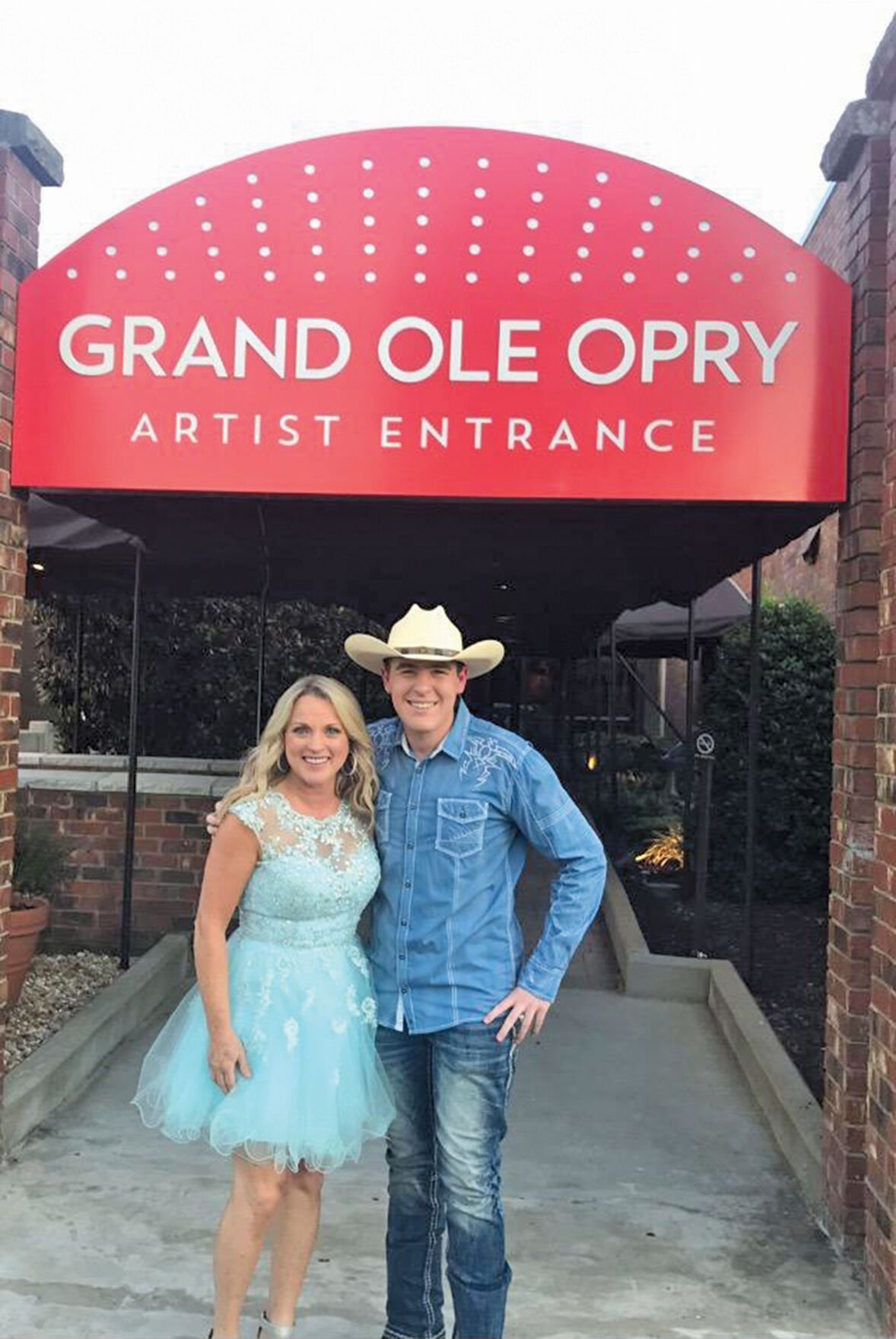 Rhonda Vincent and Dillon Massengale outside of the Grand Ole Opry at the artist entrance on Aug. 17. 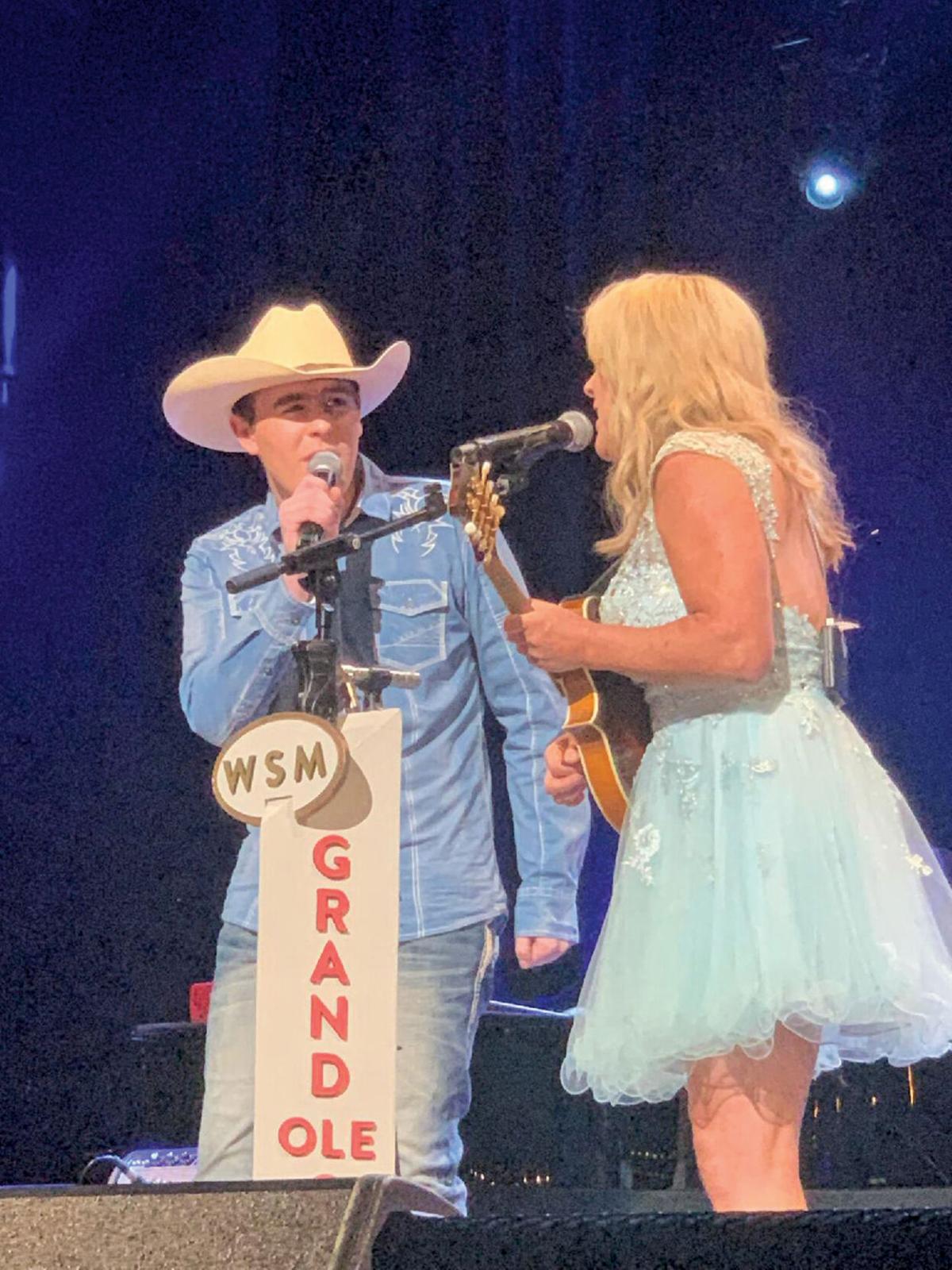 Dillon Massengale and Rhonda Vincent performing their duet “What We Don’t Have” at the Grand Ole Opry. 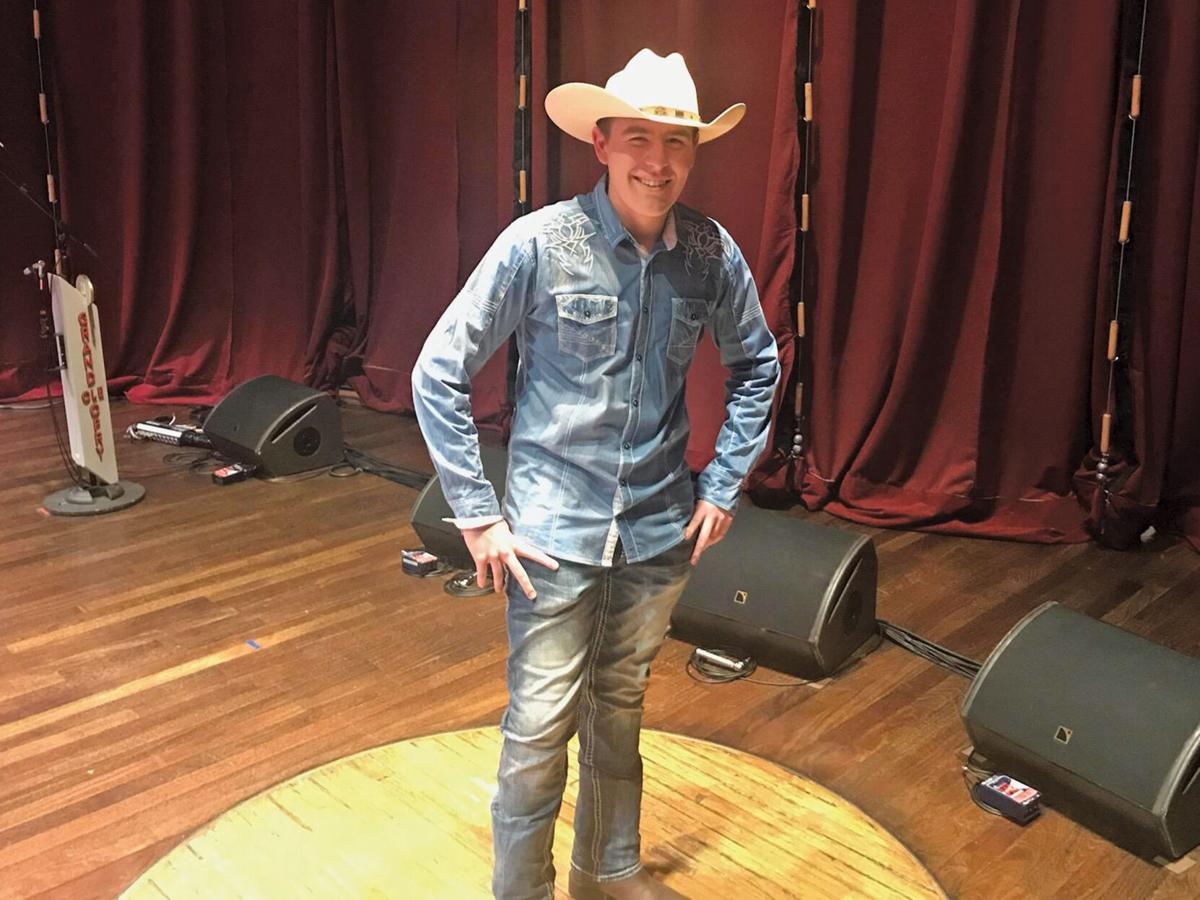 Dillon Massengale stands atop the circle on the Grand Ole Opry stage ahead of his debut performance.

Rhonda Vincent and Dillon Massengale outside of the Grand Ole Opry at the artist entrance on Aug. 17.

Dillon Massengale and Rhonda Vincent performing their duet “What We Don’t Have” at the Grand Ole Opry.

Dillon Massengale stands atop the circle on the Grand Ole Opry stage ahead of his debut performance.

A young entertainer from Branson recently made his Grand Ole Opry debut, just months after releasing his first CD.

On Tuesday, Aug. 17, Dillon Massengale joined the Queen of Bluegrass, Rhonda Vincent, on stage at the Grand Ole Opry to perform their duet “What We Don’t Have.” The duet with Vincent is just one of several songs included in Massengale’s new CD, which he released back in April.

Massengale and his family were en route to Lexington, Kentucky to join Vincent for the taping of WoodSongs Old-Time Radio Hour for PBS and RFD-TV, when Massengale’s father, Wayne, received a call from Vincent.

“She said, ‘What’s your plans after we do the TV show on Tuesday?’ I told her, ‘Well I’ve got to get back to Grand Country. We have shows and the family show is finishing up the last week at the Little Opry Theatre,” Wayne said, “She said, ‘Well, I just got called to do the Opry on Tuesday and I’d love for Dillon to sing with me on the Grand Ole Opry.’  Instantly it’s like, plans have just been changed. We’re going to be there.”

Wayne said he then turned his phone on speaker so Vincent could present the invitation to Dillon herself.

“Through my mind I was shocked and I was very nervous, but very excited,” Dillon said. “That was what was going through my mind the whole way. It was really cool.”

After recording the WoodSongs special with Vincent, she then invited the Massengale party to join her on her tour bus, so they could all ride to Nashville together.

“She’s so gracious, accommodating and just a class act. She helped get us there. Well, we’re in Nashville, we’ve got to get a room. She said, ‘No way, you’re staying with me.’ All during this time, this is the worst time in the world for company for her, because her daughter is in the hospital getting ready to have her first grandchild,” Wayne said. “She was like, ‘I can’t be there anyway, because of the COVID regulations and stuff. I can’t be in there with her, so this is good for me. It’s good to have company and keep my mind off it, so we stayed at her house.”

At the Grand Ole Opry performance, Vincent herself was able to welcome Dillon out to the stage.

“The opry is such an amazing family and their kindness is just endless and they have allowed me a very special honor tonight. There’s a young man, and I met him and he and his family, The Melody Hart Family, in Branson when we did Christmas in Branson,” Vincent said on the Grand Ole Opry. “He’s an amazing singer, musician and he was born with a form of autism, but he’s a shining example, such an inspiration to so many. He has developed his talent with many life challenges. I am so excited. He is 17 year’s old and I get to invite him, thanks to the Opry, right now to sing a new duet that we have. Please make welcome for the first time, Mr. Dillon Massengale.”

When Vincent called his name, Dillon stepped out from behind the stage and said he was greeted by thousands of people in the audience.

“I was shaking. I had chills running down my back. My hands were shaking a little bit on the side of the stage,” Dillon said. “As soon as Rhonda welcomed me on the stage I walked out there and it just all went away like it was all nothing. I think there were close to 4,000 people there that night, so it was a big crowd.”

Wayne said he believes it helped Dillon’s nerves that his son was able to spend a bunch of time with Vincent before they performed that night at the Opry.

“Once he got on the stage and in the circle with Rhonda, it’s like you have your comfort zone,” Wayne said. “It’s no longer like Rhonda the star of the Grand Ole Opry, Grammy award winner and the Queen of Bluegrass. This is me and my friend singing a song together. It’s comforting.”

As someone who also got to perform on the Grand Ole Opry stage, but with Roy Clark, Wayne shared what it meant to him to see his son make his opry debut.

“It sent chills down my back, because he’s up there and I’m trying to hold my camera still and soak it all up at the same time. He’s singing just like if he was singing to you right here or in our living room, but he’s on the biggest stage in country music. I was so proud of him, because…he’s a good ambassador and somebody who’s representing Branson in a big way and a very positive way.”

While at the Grand Ole Opry, Dillon said Vincent also took him on a personal tour of the property.

“She took me around and she took me to where the vice president (Dan Rogers) is who is in charge of it all,” Dillon said. “He wrote a nice little backstage book to me. He said, ‘This is a keeper for you and a memory you never will forget.’ He’s been working for the Opry for 30 plus years.”

While at the Opry, Dillon also got to visit with Jeannie Seely, Gary Mule Deer, Carly Pearce, Johnny Lee and Bill Cody. Since releasing his CD early this year, Massengale said Vincent has been kind enough to keep inviting him to places where they can sing their duet together.

“We’ve got to perform it at different venues. We did it in Marshfield at the Cherry Blossom Festival. We did that one in April. That was the first time I ever sang with her (live). Out of all the people, on the front row was Country Music Hall of Famer Randy Travis sitting right there in front of me,” Dillon said. “We’ve got to perform it here in Branson. We got to perform at Grand Country on Branson Country USA. I got to travel to Nashville at the end of May to do the Ernest Tubb Midnight Jamboree at the Texas Troubadour. I got to do that for the first time.”

At the Aug. 16 recording of the Michael Jonathan’s WoodSongs Old-Time Radio Hour PBS/RFD TV special, Dillon got to once again perform his duet again with Vincent. He also had the chance to sing his song, “Here Comes the Loneliness,” on the program, where he was joined by his father Wayne, mother Melody Hart, brother Garrett Massengale and six-time Branson Guitar Player of the Year Dino Strunk. The television release date for the show has not been announced, but the live stream of the show can be found on the ‘WoodsongsOTRH’ YouTube channel.

Those interested in seeing Dillon perform live in Branson can find him in a variety of places in the near future. Starting back on Sept. 9, Dillon will be performing with the Melody Hart Family Band every Thursday from 5 to 6:30 p.m. at Jackie B. Good’s Uptown Cafe. The family will also be performing out at Silver Dollar City as part of Country Music Days on Sept. 10, 11, 12, 17, 18 and 19.

For additional information on Dillon and his family, or to purchase his new CD visit melodyhartfamily.com or the ‘Dillon Massengale Fanpage’ on Facebook.