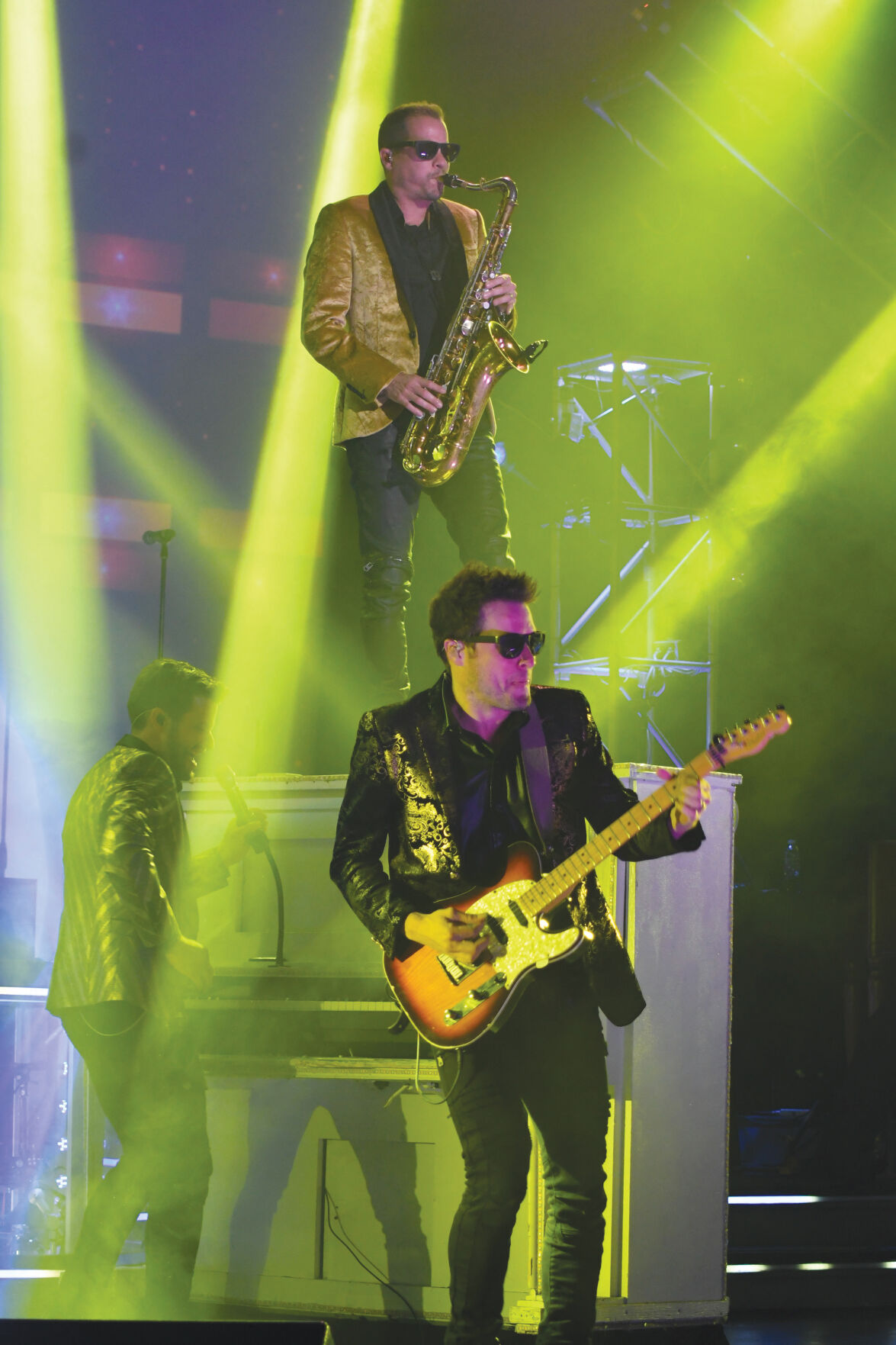 Patrick (left), Dominic and Michael Haygood showcase their talents on a variety of instruments. 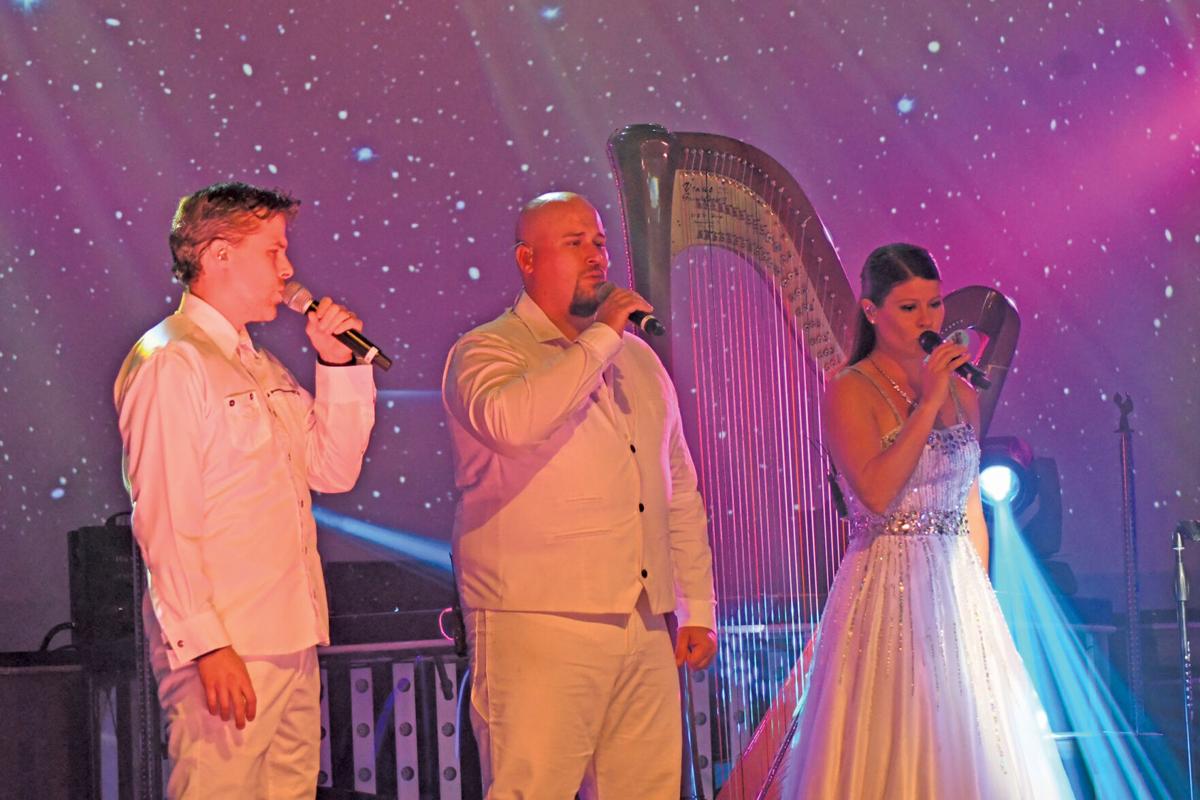 Timothy (left), Matthew and Catherine Haygood perform together on stage at the Clay Cooper Theatre. 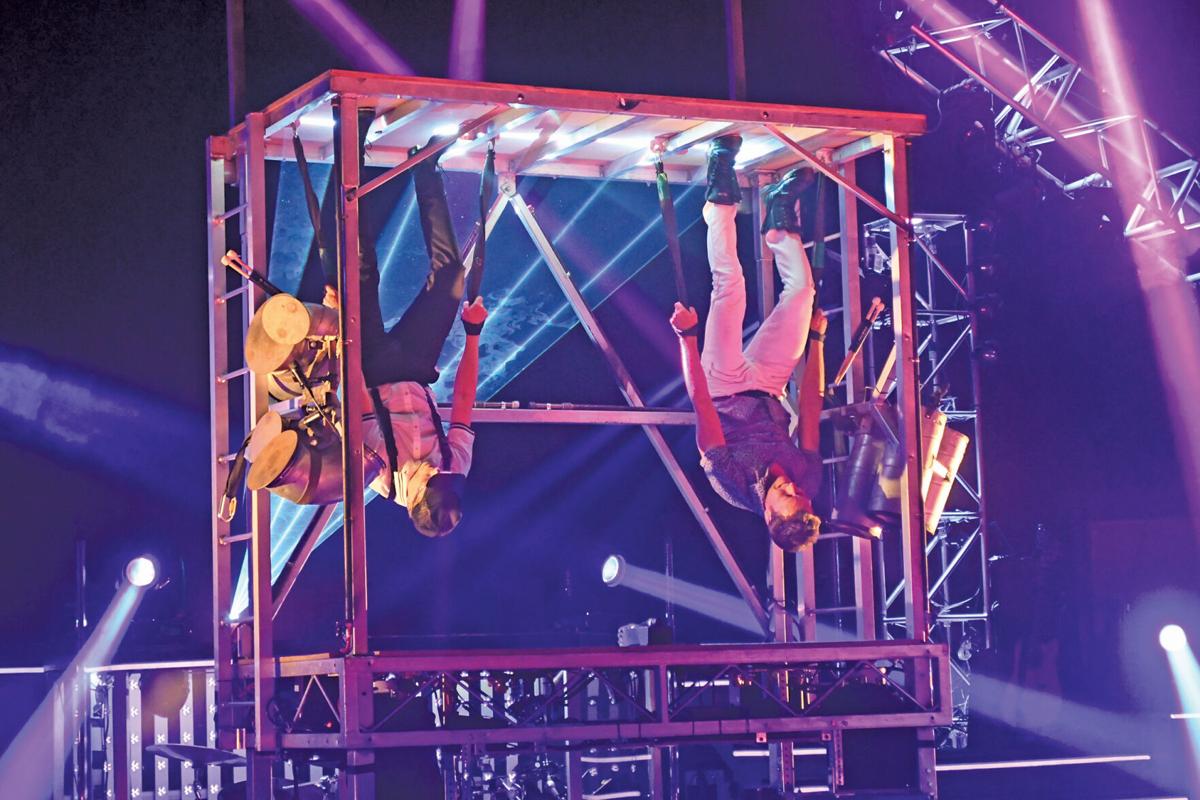 Whist suspended upside down, Timothy and Michael Haygood perform a tap dance routine on an aluminum structure that is also outfitted with drums and pyrotechnics as one part of the newest element to their show.

Patrick (left), Dominic and Michael Haygood showcase their talents on a variety of instruments.

Timothy (left), Matthew and Catherine Haygood perform together on stage at the Clay Cooper Theatre.

Whist suspended upside down, Timothy and Michael Haygood perform a tap dance routine on an aluminum structure that is also outfitted with drums and pyrotechnics as one part of the newest element to their show.

The Haygood are making their return to the stage on Saturday, Feb. 6 as they prepare to host their first performance of the 2021 Branson show season.

Going into the new year, The Haygoods are celebrating their 29th year in Branson. In their nearly three decades of performing they’ve played more than 7,000 shows and sold more than 6 million tickets.

The Haygoods feature the talents of five of the Haygood brothers, Timothy, Patrick, Dominic, Michael and Matthew. Joining her brothers on stage is sister, Catherine, 29, who has been performing in Branson since she was just a year old.

When the pandemic shutdown began around March 2020, CEO of Haygood Entertainment Timothy Haygood said they took advantage of the time off and prepared more than 45 minutes of new material for their show.

“We didn’t really want to take 12 weeks off, but we had to,” Haygood said with a laugh. “So we just decided to get busy and start working. We doubled down on the show and basically spent the entire 12 weeks around the clock at the theatre working and building new segments. Everything we had ever dreamed up that we wanted to get into the show we just decided to make it happen.”

The new material included 12 new songs, three new laser systems, LED walls, a guitar playing robot that flies and an all new finale. On top of all these new elements, Haygood said that one of their biggest additions to the show is an entirely new tap dancing number that includes tap dancing upside down with lots of pyrotechnics.

“So we completely redid the 10 minute tap section. We added special fire effects to it and we also added upside down tap dancing, which is something we had never done before and we didn’t even know if it was possible. We started experimenting with it,” said Haygood. “After working out to strengthen our back muscles — to hold ourselves upside down — for two months we were able to develop a way to tap completely upside down on the ceiling of the riser that we use. It’s a crazy effect. It looks completely nuts from the audience perspective and it goes over really, really well in the show.”

Haygood explained that the new tap routine took every bit of their 12 weeks off to choreograph and put together.

“We’re working with percussion that’s built into a large riser. We had a special fabricator build us the aluminum riser and the design of that took a while and there was a local craftsman that built that for us. Then we added all the special fire effects to it and then rigged it up so we could tap upside down during that number. Also we tap on top of it, which is more than two stories high in the air.”

While they created a lot of new material in 2020 for their show, changing things up is nothing new to The Haygoods.

“We feel in order to keep people coming back we have to introduce new things and change the show every year. We change 30% to 40% of the show every single year and we have for the last 29 years that we’ve come to Branson,” Haygood said. “We get restless and we have lots and lots of creative ideas that we’re always shooting back and forth amongst each other and we love putting them on stage and trying them out.”

Haygood added that the consistent evolution of their productions is not only to make their performances the biggest and best they can be, but to also become more than just show.

“There’s a lot more attractions in Branson now than there were. So it’s more competitive than it ever was. We don’t look at our show as a show, we think of our show as an attraction. We’ve never looked at it as strictly a concert where you just stand there and play music. It’s an attraction. You’re going to see an insane entertainment experience,” said Haygood. “You’re not going to just come and sit there while some guys stand there and sing. Of course it’s always about the music, but at the end of the day the show business industry has gotten so competitive here in Branson that we are making our show, and we have made it, into an attraction instead of just a music show and we feel we have to do that in order to stay relevant.”

By integrating multiple types of technological entertainment into each of their performances, Haygood said they can stay relevant by giving audiences what it is they want to see.

“We take an extensive amount of surveys, and I’m talking thousands of surveys, every year. What songs do you want to hear? What do you want to see? The crowds have totally changed the last 10 years,” Haygood said. “The technology and entertainment has been moving so fast that if you’re not up on it and you’re not with it and if you’re not continually changing and offering new things that are just mind blowing, you’re not going to survive. That’s just the bottom line. You’re not going to survive, because there are so many entertainment options that are available out there. So that’s kind of the psychology behind what we do and what we’re thinking.”

When selecting what music to include each season, Haygood said their goal is perform song selections that will entertain audience members of all ages.

“It’s everything from 60’s all the way up through today. We even take pop movie themes and change them up. There is no one genre or style. You’re going to see pretty much most genre’s or styles,” said Haygood. “We’re going to play 20 different instruments while we’re doing this and every single piece of music is arranged differently from the original. So you’ll recognize the melody, but we put our own twist on everything and make it work for us.”

Though 2020 was a difficult year, Haygood said they are incredibly grateful for all the support they received during the shut down and throughout the entire year.

“We did a lot of online shows that had more than 100,000 people watching each one and that was awesome to see. We sold out every single show that we’ve played since the day we reopened, even with the capacity, and for that we are incredibly grateful,” Haygood said. “That’s what’s interesting about this town is the local support and people that live here and work here are the reason you will succeed. If they love what you do and you are good to them, you’ll always succeed. That’s really the bottomline for us.”

Haygood said the siblings spent the winter in their recording studio and warehouse working on new additions for their 2021 season, which will include elements that are new, wild and never before seen on stage.

“We are going to be changing again 30% to 40% of the show. We have a lot of brand new ideas, concepts, music and technology that we’ll be rolling out over the course of the next 90 days,” said Haygood. “Our advance reservations for 2021 are the strongest on record that we’ve ever seen in advance, particularly in the fall so we know Branson’s going to have a super strong year.”

The Haygoods have been performing in the Branson area since 1993, when they began performing at Silver Dollar City. In 2001 the family of entertainers left SDC and moved their show to the Branson strip in 2002. In 2014, The Haygoods found their current home at The Clay Cooper Theatre.

For the rest of the month of February, The Haygoods will have performances every Saturday at 7:30 p.m. Starting in March 2021 shows will run every Tuesday, Thursday and Saturday night at 7:30 p.m. with 2 p.m. shows on select dates through the year.