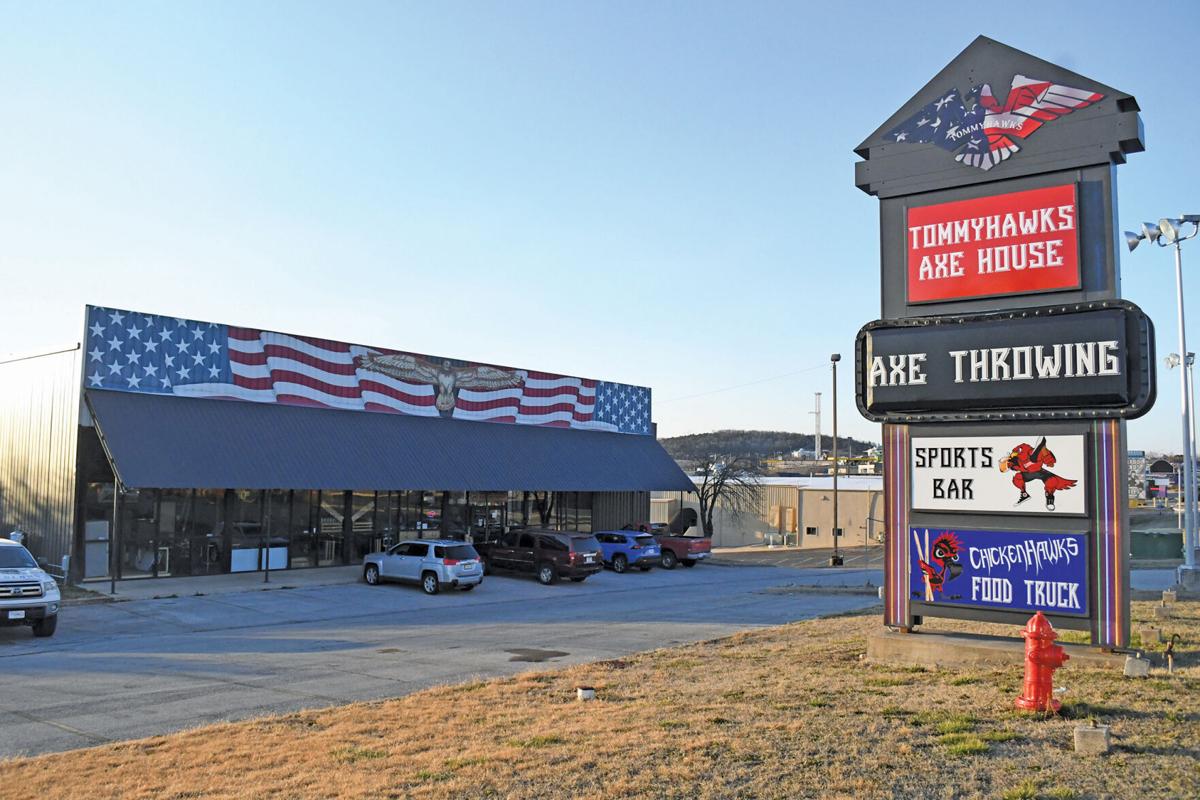 TommyHawks Axe House opened in Branson in July 2019 and was the second TommyHawks location to open in Missouri. 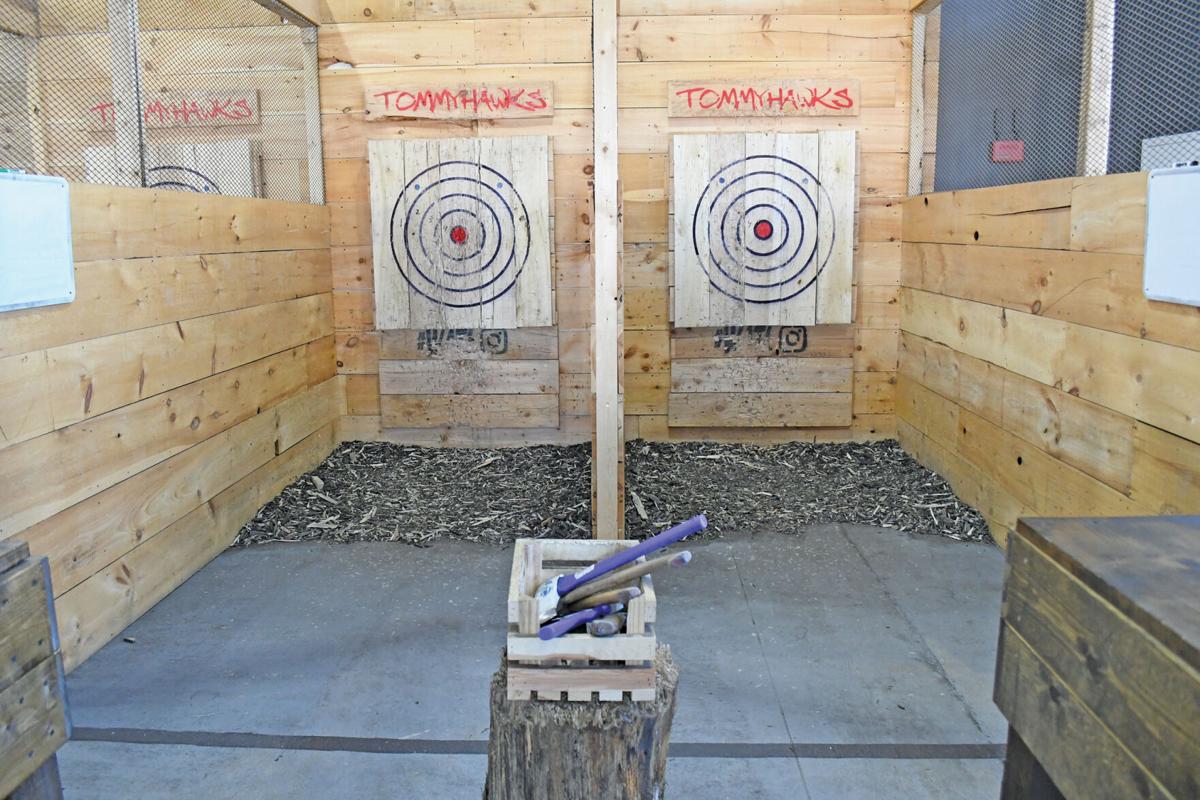 TommyHawks Axe House in Branson gives folks the opportunity to throw axes from at least 12 feet away at bullseye targets on the wall. 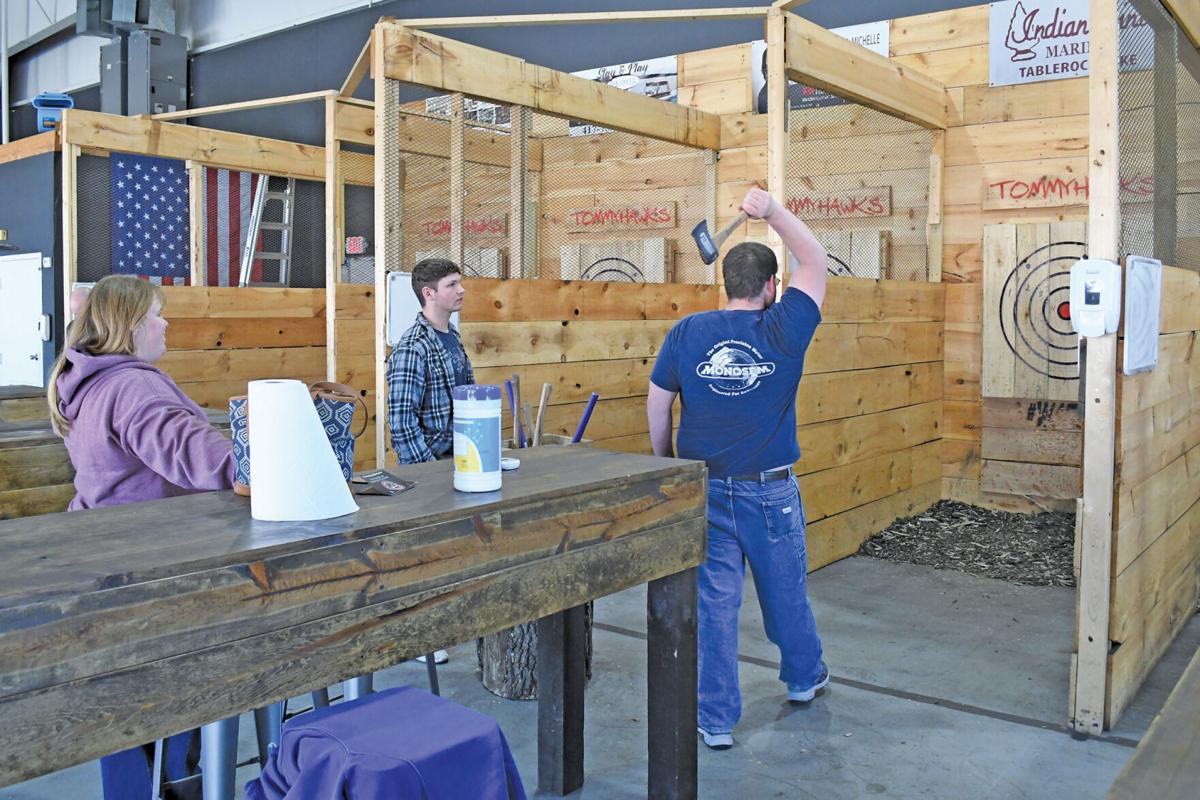 Kaitlan Dinges and Coach Maverick Porter, center, observes as John Cray throws an axe toward the target at TommyHawks Axe House in Branson. 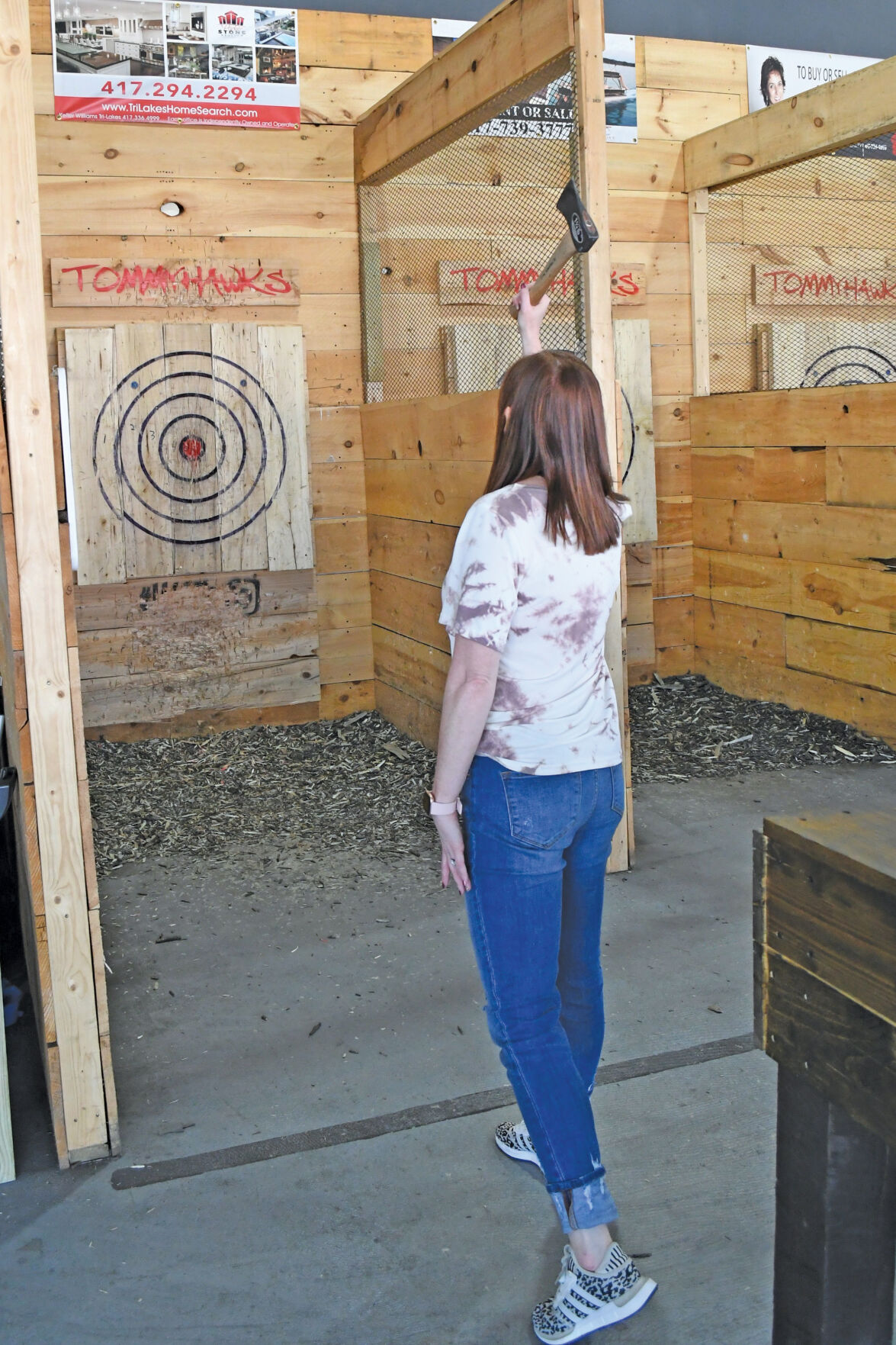 Julia Willey of Arkansas leans forward as she throws her axe at TommyHawks Axe House in Branson. 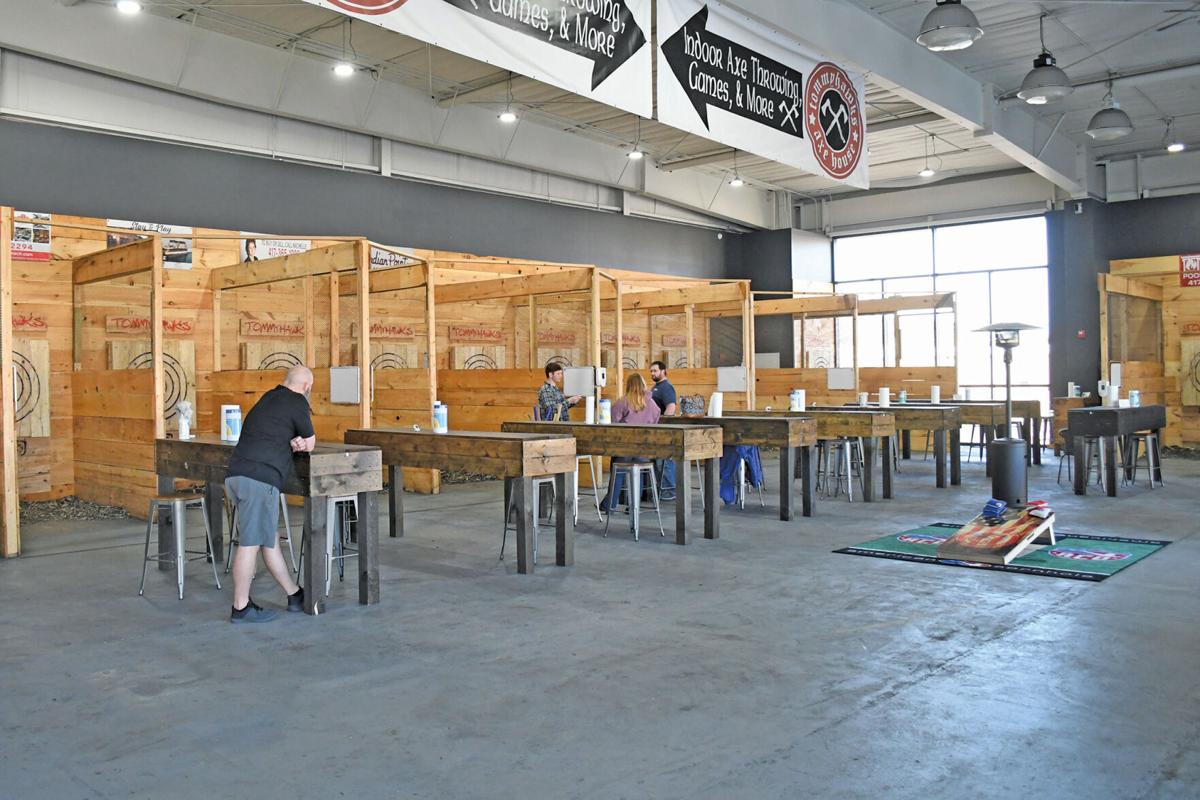 On top of throwing axes, guests can also play pool or cornhole as well as a bar offering beer, wine and soda. 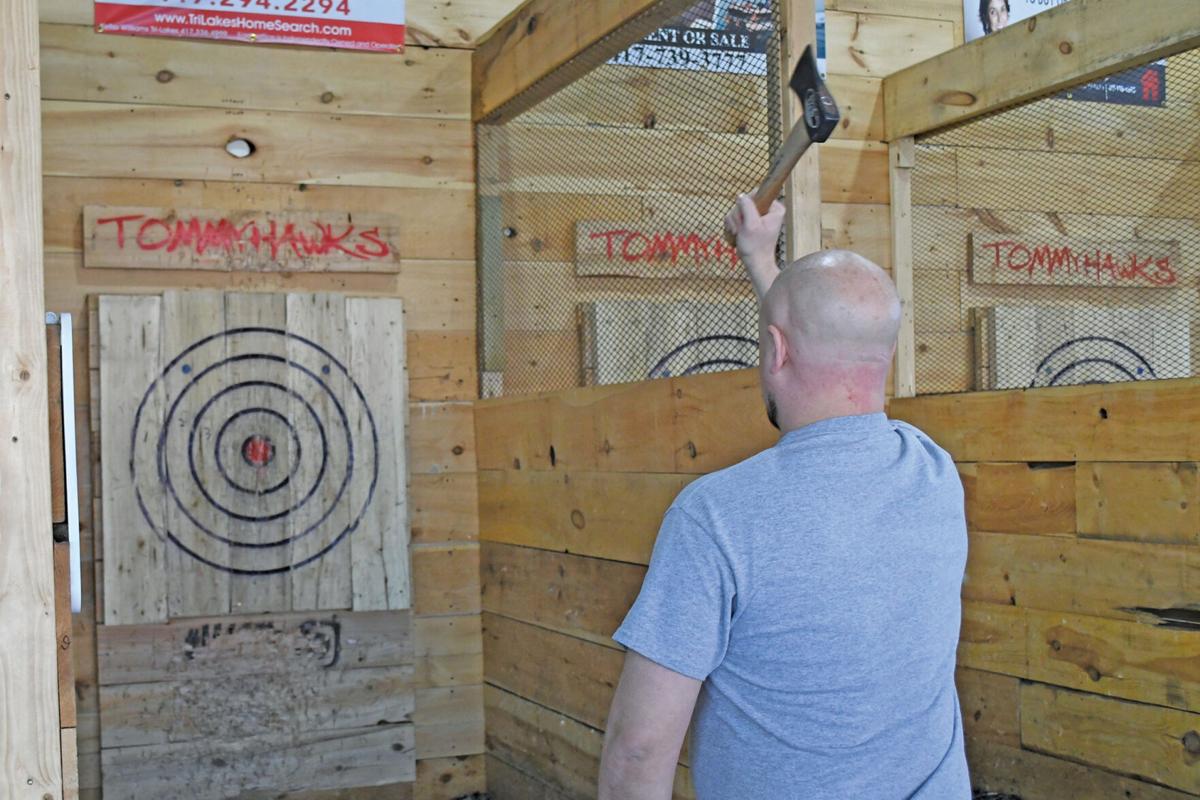 Josh Grisham of Branson throws an axe at the bullseye at TommyHawks Axe House in Branson. 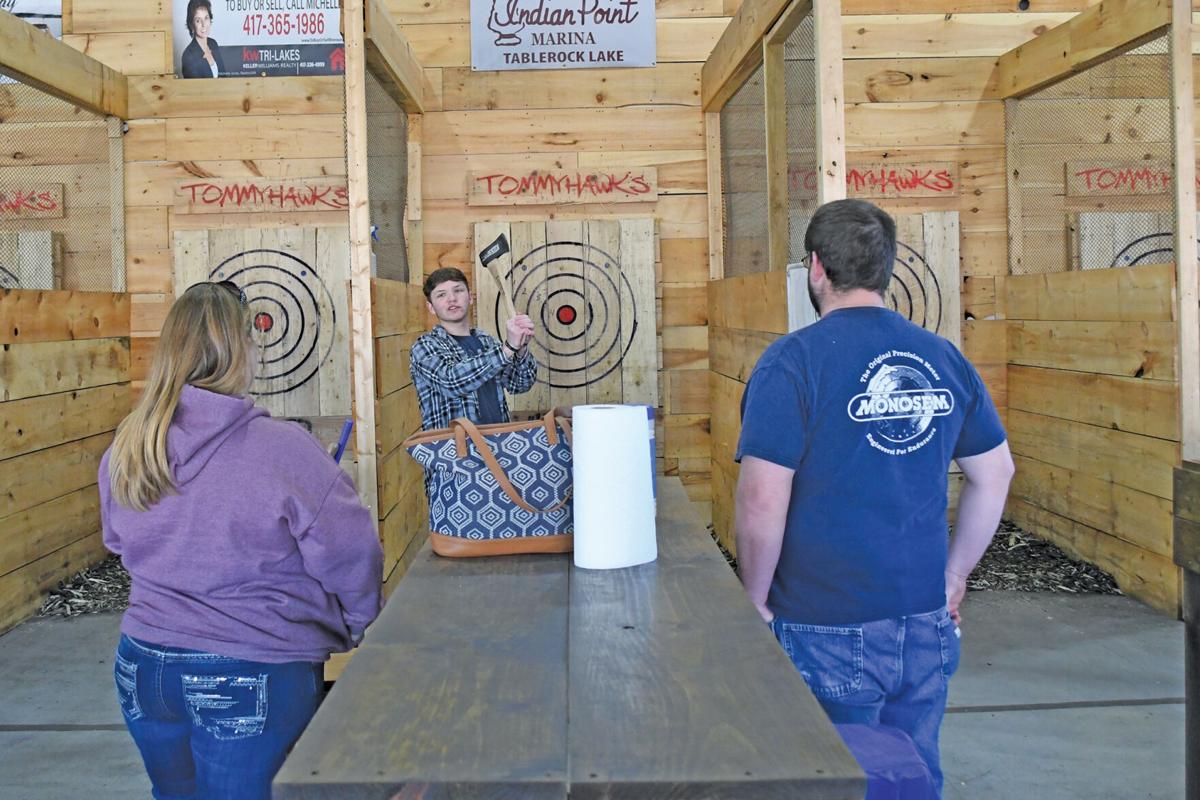 TommyHawks Axe House opened in Branson in July 2019 and was the second TommyHawks location to open in Missouri.

TommyHawks Axe House in Branson gives folks the opportunity to throw axes from at least 12 feet away at bullseye targets on the wall.

Kaitlan Dinges and Coach Maverick Porter, center, observes as John Cray throws an axe toward the target at TommyHawks Axe House in Branson.

Julia Willey of Arkansas leans forward as she throws her axe at TommyHawks Axe House in Branson.

On top of throwing axes, guests can also play pool or cornhole as well as a bar offering beer, wine and soda.

Josh Grisham of Branson throws an axe at the bullseye at TommyHawks Axe House in Branson.

Throwing axes towards a wall marked with a bullseye target, it’s a unique concept, but one they’ve perfected at TommyHawks Axe House in Branson.

From a historical standpoint, carrying a tomahawk, axe or hatchet was routine for folks in the past. Nowadays, not so much, but at TommyHawks Branson they are helping to keep the proud tradition of throwing axes alive.

Owner Rick Porter explained what folks will find when they come visit their venue.

When it comes to ability, Porter said one of the great things about axe throwing, is it can be done by people of all skill levels.

“We’ll actually start letting you throw at the age of 10,” said Porter. “I’ve had an 87 year old woman throwing with me. That’s what I love about the sport, is there really is no guidelines as to who can do it and who can’t do it.”

Porter added that the axes used at TommyHawks Branson are a fairly standard version.

“It’s just a standard hatchet that we get at a hardware store,” said Porter. “We do have one that is specifically from the World Axe Throwing League — which we’re an affiliated member of — and it is built for throwing. The other hatchets aren’t really built for throwing, but they work great.”

At TommyHawks Branson guests will find a dozen throwing lanes with bullseye targets set up at one end and a place to stand alongside a crate of axes at the other.

“The design of the target is specific from the World Axe Throwing League. We have to follow specifications from them to make sure the width of the line is the right width and the bullseye’s and all of that are the right size,” said Porter. “The wood is probably where we differ from a lot of axe houses. We may be the only one in Branson that uses cottonwood for our targets. Cottonwood is kind of the premiere axe throwing wood, because it’s so soft.”

The measured distance between the target and the thrower is set at 12 feet, however there are situations that will give throwers the chance to stand back further.

“The World Axe Throwing League did studies to figure out where that optimum distance is, because you’re only getting one solid rotation out of that axe before it hits the target, and 12 feet is that distance. Now that’s for a standard hatchet,” Porter said. “They do, do a big hatchet also, or a big axe, which we don’t throw in here yet, just because we haven’t made that big move just yet. The bigger axe you’ll be back between 15 and 17 feet.”

While many people don’t discover it until they do it, Porter explained that there is a definitely a technique to throwing an axe.

“We’ll get comments just about every day where … they’ll be a few throws into it and they’ll make a comment that ‘We didn’t realize that it was quite this technical.’ But the techniques aren’t that hard, it just takes a little bit to grasp a hold of those,” said Porter. “Once you grasp them, typically people do pretty well at it.”

Porter shared regardless of group size, he’ll have a coach work with every person throwing until they get an axe to stick in the target.

“Our goal is to get them to stick the axe in the target in the first three throws,” said Porter. “I would say we have about a 90% success rate at doing that.”

TommyHawks Branson is one of three TommyHawks Axe Houses in Missouri, with the first location in Springfield and newest location now open near Joplin.

“The original TommyHawks is up in Springfield. They opened in March of 2018 and they were the original axe house like this to open in Southwest Missouri. Now there’s axe houses popping up all over the place,” said Porter. “We were the first franchise to sign on with them.”

Porter, who recently retired from serving as the Stone County Sheriff’s Office Criminal Investigation Division Captain, said he first got involved with the franchise after visiting the Springfield location with his wife Kristal back in 2019.

“We specifically picked that location, because of the veteran owned theme that they had. So all of the TommyHawks locations are either veteran owned or law enforcement owned,” said Porter. “So we went and threw there and just fell in love with it. That just kind of led to conversations with the owners and we fell in love with the owners of the brand. That was April and we were open in July. It went very quickly.”

For those who come to play and fall in love with the sport like the Porter’s did, they offer a TommyHawks Branson Axe Throwing League.

“Everybody competes the same. Somebody could come off the street and compete. There’s no try outs. It’s mainly an individual sport anyway and we encourage new throwers to jump in our league,” said Porter. “We run standard hatchet and what they call duels, which is a team event. Two people team up as partners and throw against another team. It’s really fun to watch, because you’ll have four people on the throwing line and everybody’s throwing at the exact same time. So you’ve got four axes going down towards the target and it gets pretty interesting sometimes.”

Porter shared that from Sept. 10 to Sept. 12 TommyHawks Branson will be partnering up with the Springfield and Joplin TommyHawks Axe Houses to host The Show-Me State Throw Off Axe Tournament.

“It will be a Friday, Saturday, Sunday tournament. If we get 300 throwers, those will be split into groups of 100. So we’ll host 100 throwers here in Branson for Friday and Saturday in the preliminary rounds to get to the final 10. Then the championship rounds, with those final 10, will be in Springfield on Sunday,” said Porter. “We have a $20,000 plus prize pool, which is one of the largest in the axe throwing community.”

“I am in the process of starting some cornhole leagues in Branson. We are a member of the American Cornhole Organization, which is a new thing that I’ve done. The ACO, for short, they are bringing some major tournaments to Branson starting this year,” said Porter. “The goal is to work into just some local tournaments here in the area and then start working into people signing up, getting memberships, getting circuit points and then traveling to some of these larger tournaments.”

The cost to throw is $20 per, hour per person. Walk-ins are welcome, but reservations are encouraged, especially for larger groups.

TommyHawks Axe House is located at 3430 W. 76 Country Blvd. in Branson. For additional information or to make a reservation call 417-320-2205 or visit tommyhawksbranson.net.