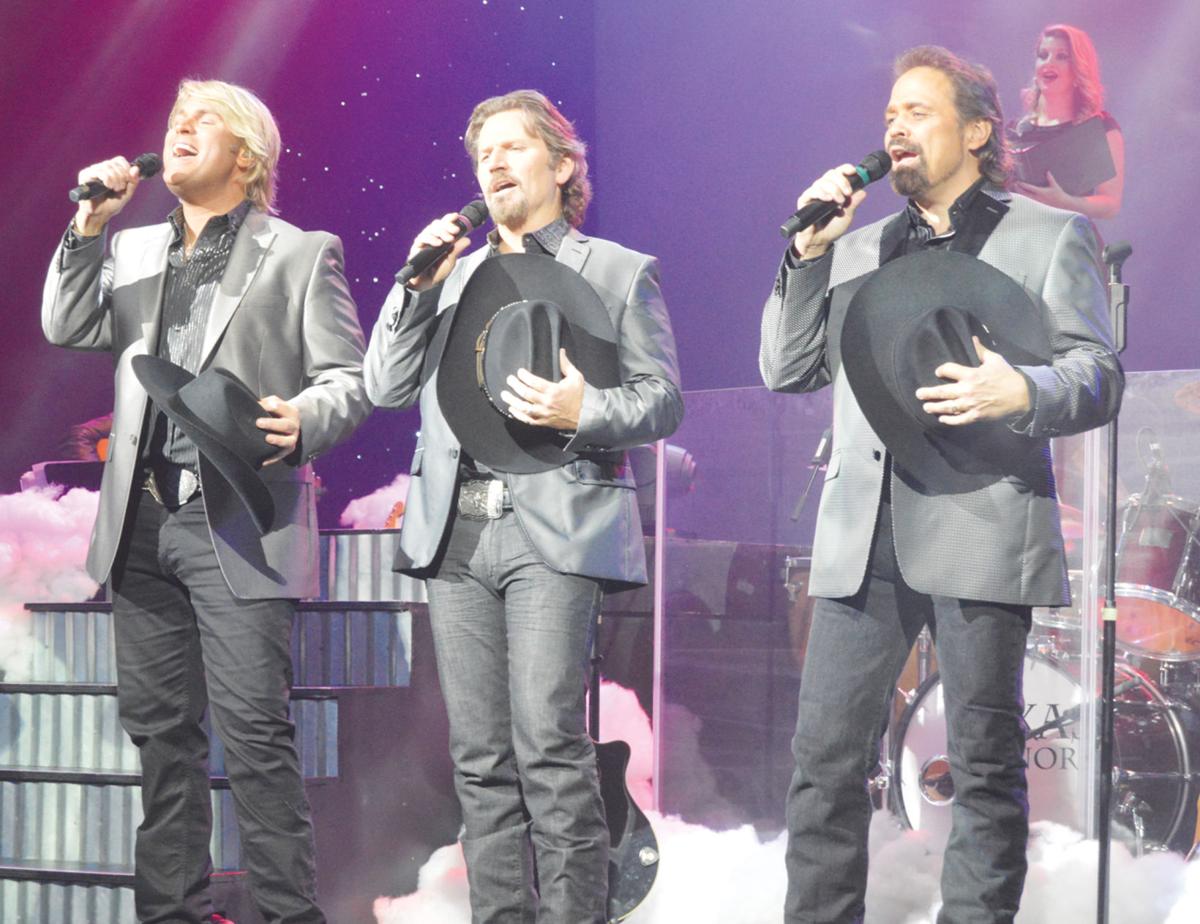 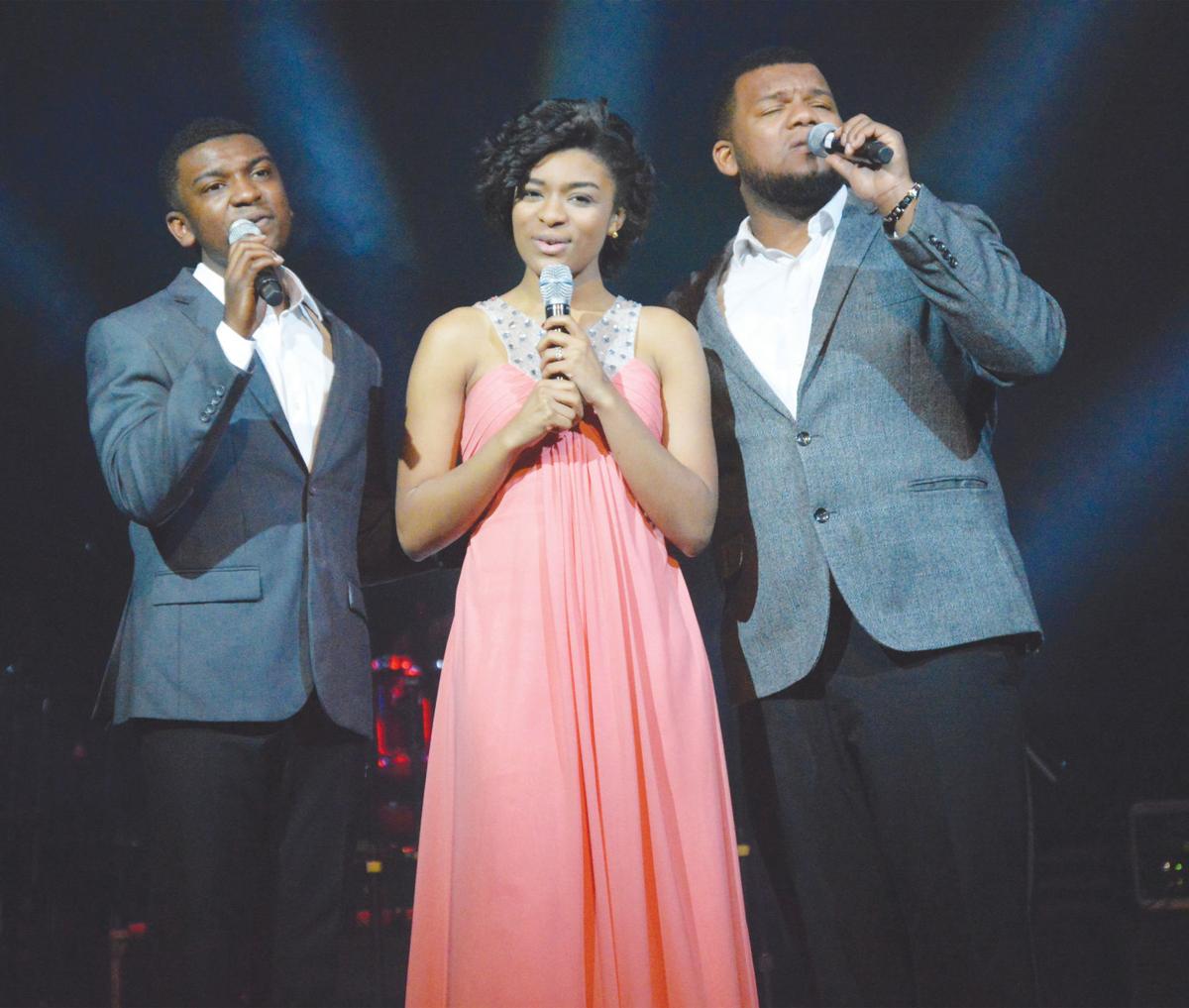 Avery, from left, Nadia and Michael Cole, also known as the Voices of Glory, and their show “Ayo” will call the Andy Williams Performing Arts Center & Theatre home in 2018. 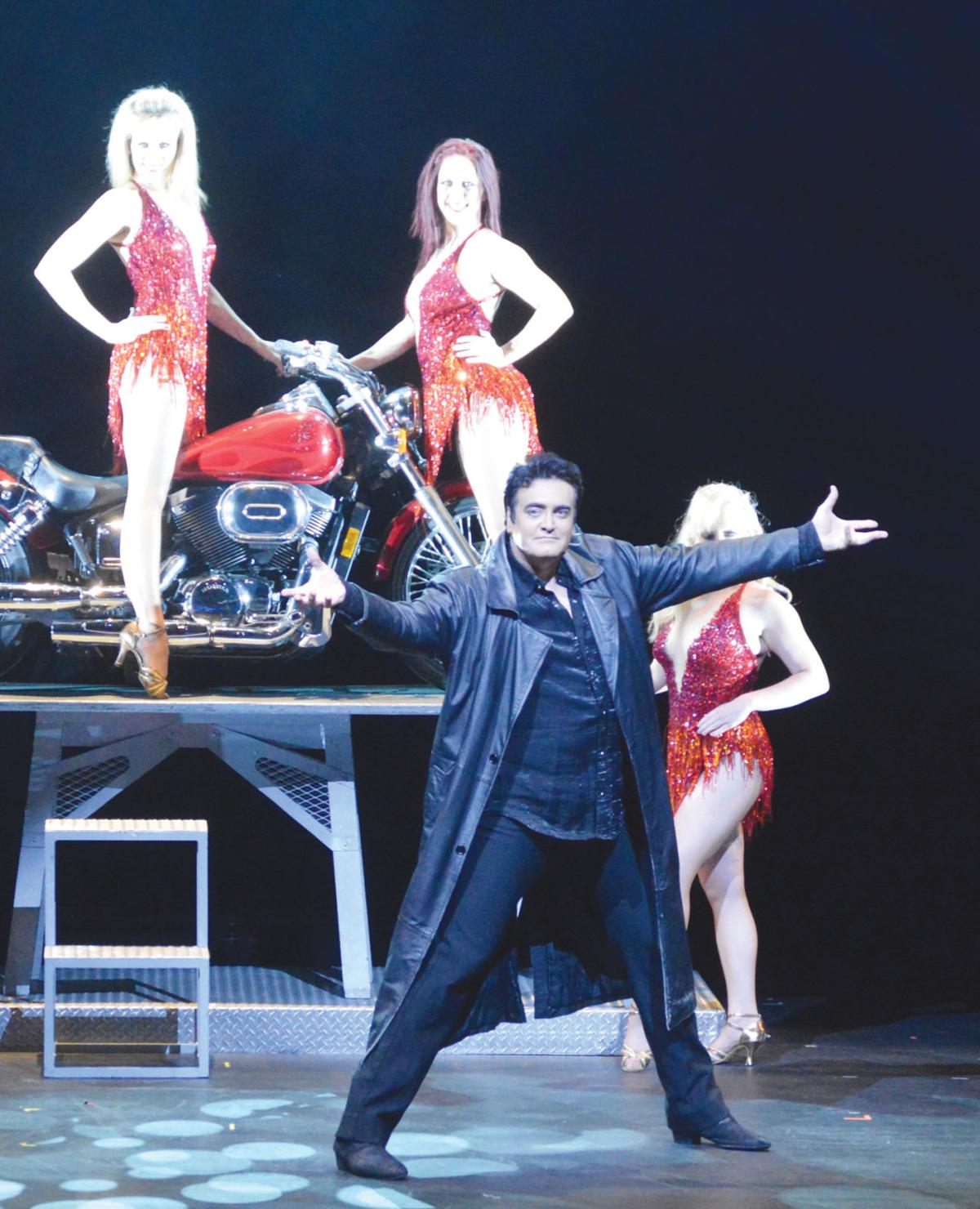 Avery, from left, Nadia and Michael Cole, also known as the Voices of Glory, and their show “Ayo” will call the Andy Williams Performing Arts Center & Theatre home in 2018.

The “Branson Shuffle,” the unofficial nickname for shows changing venues from season to season, got even bigger this week. Folks from the Andy Williams Performing Arts Center & Theatre announced the lineup for the 2018 season, which will include “Ayo featuring the Voices of Glory,” the trio of Marcus Collins, JC Fisher and John Hagen, also known as the Texas Tenors, and the “All Hands on Deck” show, as well as the resurrection of “Jimmy Osmond’s American Jukebox Show,” this time set to feature the 5th Dimension.

Shows returning to the venue include “Illusionist Rick Thomas,” a lineup of “big names” featured in the “Celebrity Weekend” shows, as well as the newly rebranded Christmas show, “Andy Williams Ozark Mountain Christmas Show” hosted by Jimmy Osmond and starring the Lennon Sisters.

“We are extremely excited to be presenting these award winning shows in the 2018 season,” said Andy Williams Performing Arts Center & Theatre’s Whit Privette. “There will be something for everyone here at the Andy Williams PAC.”

WHAT’S NEW AT THE VENUE:

The Voices of Glory, siblings Michael, Nadia and Avery Cole, first started singing together in 2007 after their mother, Felicia, was in a head-on car collision with a drunken driver. They began performing at nursing homes and on other floors in the hospital and shortly after their mother emerged from her coma, they were picked to perform on “America’s Got Talent.”

Their stint on the show gave the Cole family their first taste of national fame as they became Top 5 finalists. Once “America’s Got Talent” was in the books, the family began touring the country before settling down to perform in Branson.

They have also been featured in People Magazine, Jet Magazine, MTV Chatroom, and USA Today. They have performed in venues all across America including the Grand Ole’ Opry Entertainment Complex, American Airlines Arena, Madison Square Garden, Music City USA Auditorium, and the Apollo Center.

The have been headlining their original show, “Ayo featuring Voices of Glory,” for the past five seasons in Branson.

After calling the Starlite Theatre home for many years, the Texas Tenors, Marcus Collins, JC Fisher and John Hagen, will perform their  special engagement schedule at the venue in 2018. The group was featured on the hit TV show “America’s Got Talent” in 2009, where they became the highest ranking vocal group in the show’s history. Their first PBS special and second album, both titled “You Should Dream,” debuted in 2013 and have been very successful.

The first Texas Tenors album, “Country Roots - Classical Sound,” is the only album to reach No. 1 on the country and classical charts. The trio also debuted a new PBS special called “Rise” earlier this year.

The trio has been performing in Branson for several years and are best known for blending classical, country and pop.

Another show set to pull up stakes next season is the award-winning “All Hands on Deck Show,” which will call the venue home for fall dates only next season.

Billed as “Branson’s Most Patriotic Show,” “All Hands on Deck” is an original production set in 1942, that recreates the old school “Hollywood Victory Caravan” roadshows and radio broadcasts, ones like the USO shows the iconic Bob Hope and Jack Benny did throughout the war.

The cast inhabit their roles as “movie stars” and “entertainers” of a bygone era, belting out a boatload of classic tunes, “Chattanooga Choo-Choo,” “At Last,” “Pennsylvania Polka,” “Don’t Fence Me In,” and a military medley paying tribute to America’s servicemen and women. The show also features a nine-piece orchestra.

Also new at the venue this season is the return of “Jimmy Osmond’s American Jukebox Show,” this time starring the 5th Dimension. The show is described as a throwback to classic musical revue shows that’s described as “a little bit country, a little bit rock ‘n’ roll.”

The 5th Dimension is responsible for 14 gold and six  platinum records, as well as snagging six Grammy awards. They are best known for the hit songs “Up, Up and Away,” “One Less Bell to Answer,” “Stone Soul Picnic” as well as  “Aquarius/Let The Sun Shine In.”

The Andy Williams Performing Arts Center & Theatre will again be home to one of the area’s most popular shows, “Rick Thomas Illusionist,” returning for its fifth season in Ozark Mountain Country.

The oldest of six children, Thomas started practicing magic at the age of 7 and by the time he was 13, Thomas was performing magic shows for small crowds. When he was 18, he began performing at the Disneyland Hotel while attending Long Beach City College in California.

After that, Thomas performed on cruise ships, as well as in Europe before beginning an extended run in Las Vegas. After performing more than 500 shows every year and honing his craft, Jimmy Osmond said he felt the time was right for Thomas to come to Branson.

In addition to performing throughout the world, Thomas has also been featured on numerous national TV specials, including “The World’s Greatest Magic” specials on NBC as well as his own special for ABC that aired in Asia.

Also back next season is one of the theatre’s mainstay shows, the “Andy Williams Ozark Mountain Christmas Show” hosted by Jimmy Osmond and starring the Lennon Sisters.

Honoring the legacy of the late Andy Williams, also known as “Mr. Christmas,” the Christmas show at the venue has continued to be a tradition each holiday season.

According to Privette, organizers are “still working on some major acts too ... some great names,” which can “hopefully” be confirmed soon.

In addition to the moves at the Andy Williams Performing Arts Center & Theatre, several other venues have already joined the “Shuffle” this year.

Other new shows set for next season at the Americana Theatre include longtime local favorite Nedgra Culp headlining a new show at the Americana Theatre called “Nedgra Culp & Girls on Fire,” as well as singer, songwriter Billy Yates’ new show “Billy Yates’ Hit Songwriters in the Round,” in addition to his regular gig at “Raiding the Country Vault.”

This year’s “Shuffle” also includes shows relocating to new venues. So far, the “Acrobats of China” have settled in at their new venue, the Acrobats Theatre, formerly RFD-TV the Theatre, “Rock and Roll Revival” moved to the Caravelle Theatre, and comedian Yakov Smirnoff announced he’d be returning to his theater next fall.

As far as acts not returning, Leroy New, Little Opry Theatre staple and star of “A Tribute to Marty Robbins and Your Favorite Classic Country Music Stars,” and Nashville hitmaker Billy Dean both announced they wouldn’t be performing regularly in Branson next year, even though Dean will open for Trace Adkins April 7, 2018.

The “Branson Shuffle” is far from over, and more announcements are expected to take place over the next few months.

The “Branson Shuffle” is far from over, so keep reading the Branson Tri-Lakes News, as well as Branson Live and bransontrilakesnews.com for the latest on everything there is to see and do in the Branson Entertainment Scene.