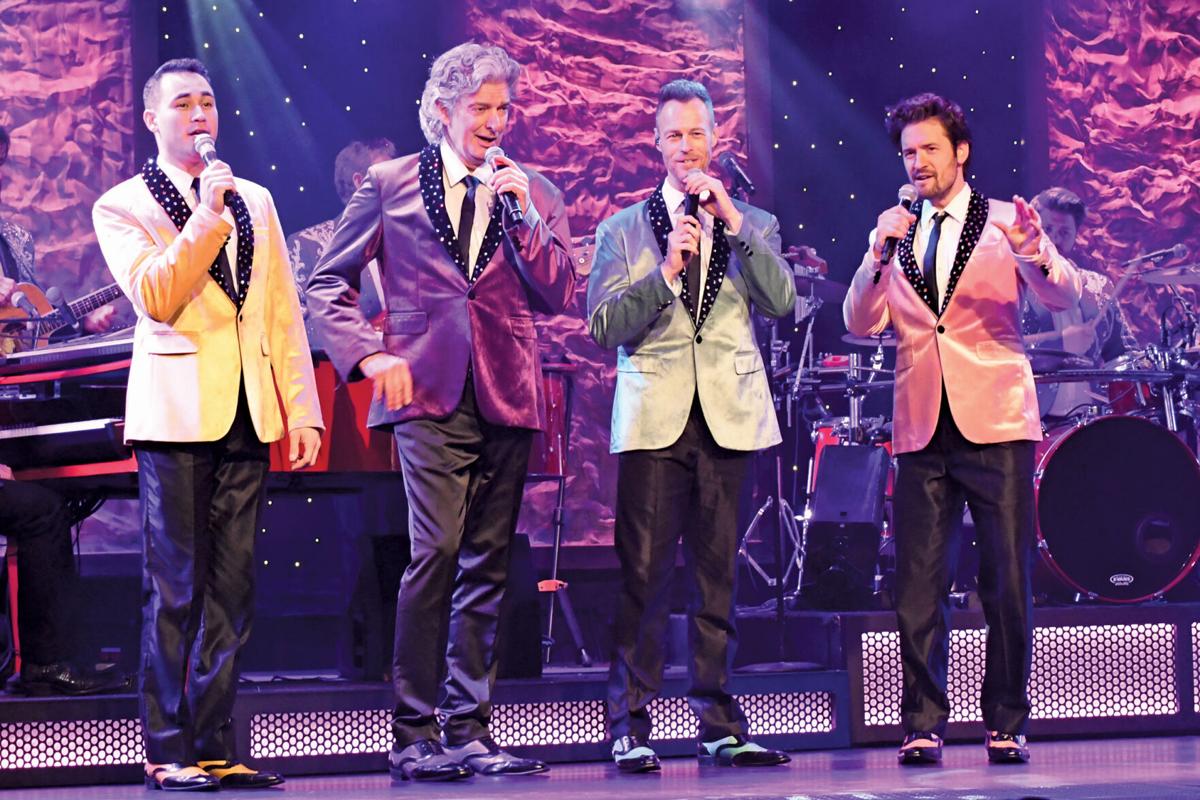 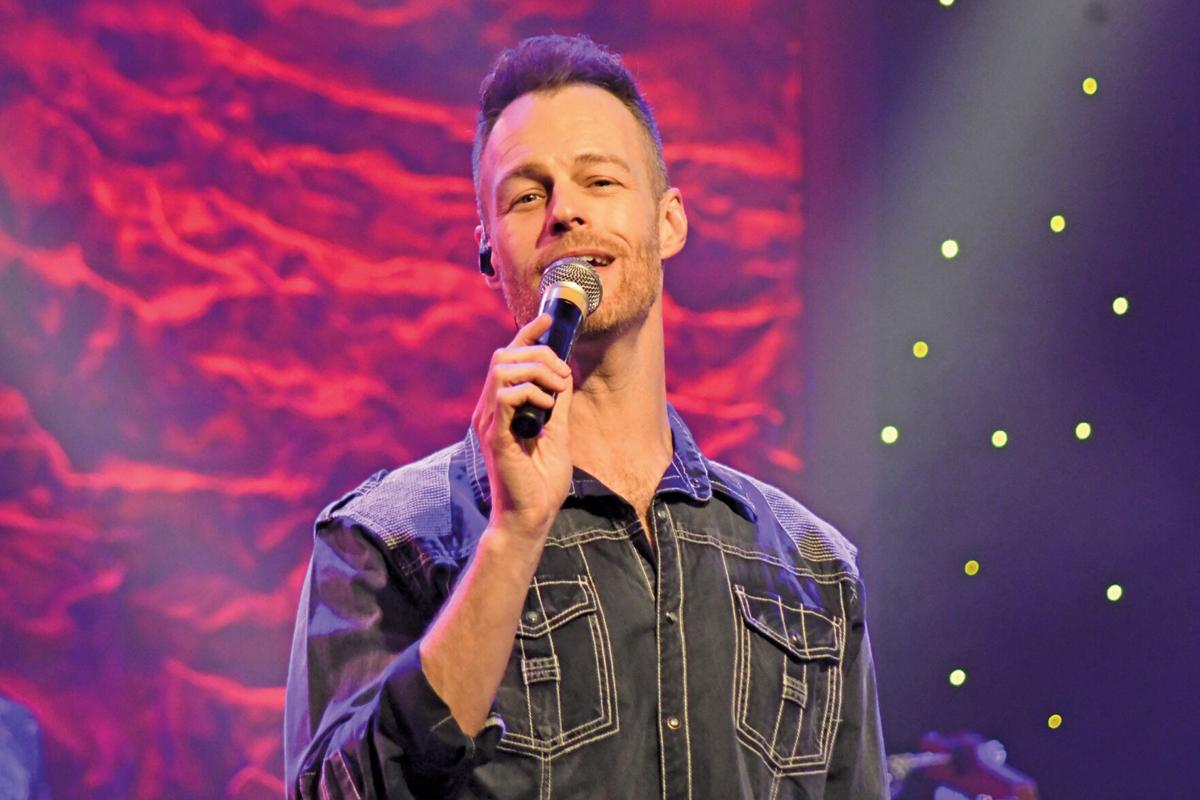 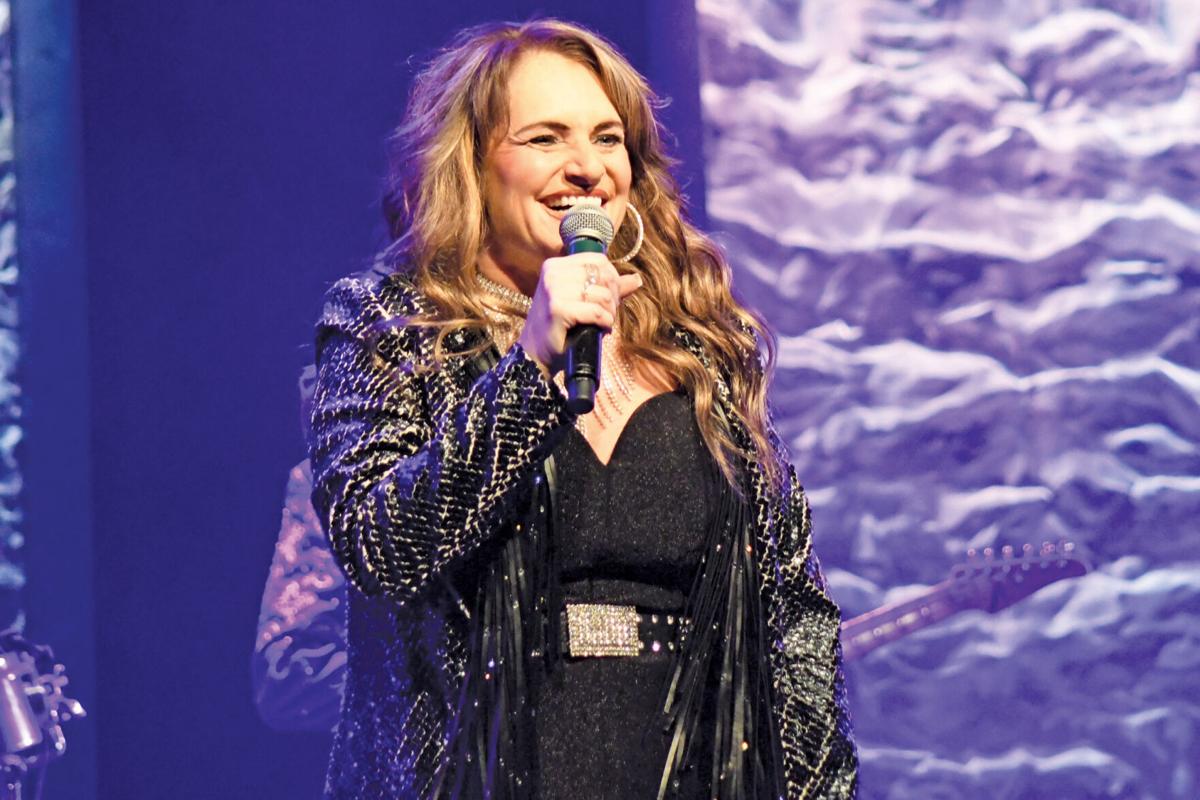 Vocalist Jackie Brown performs “Whose Bed Have Your Boots Been Under?’ as her Grand Jubilee opening piece. 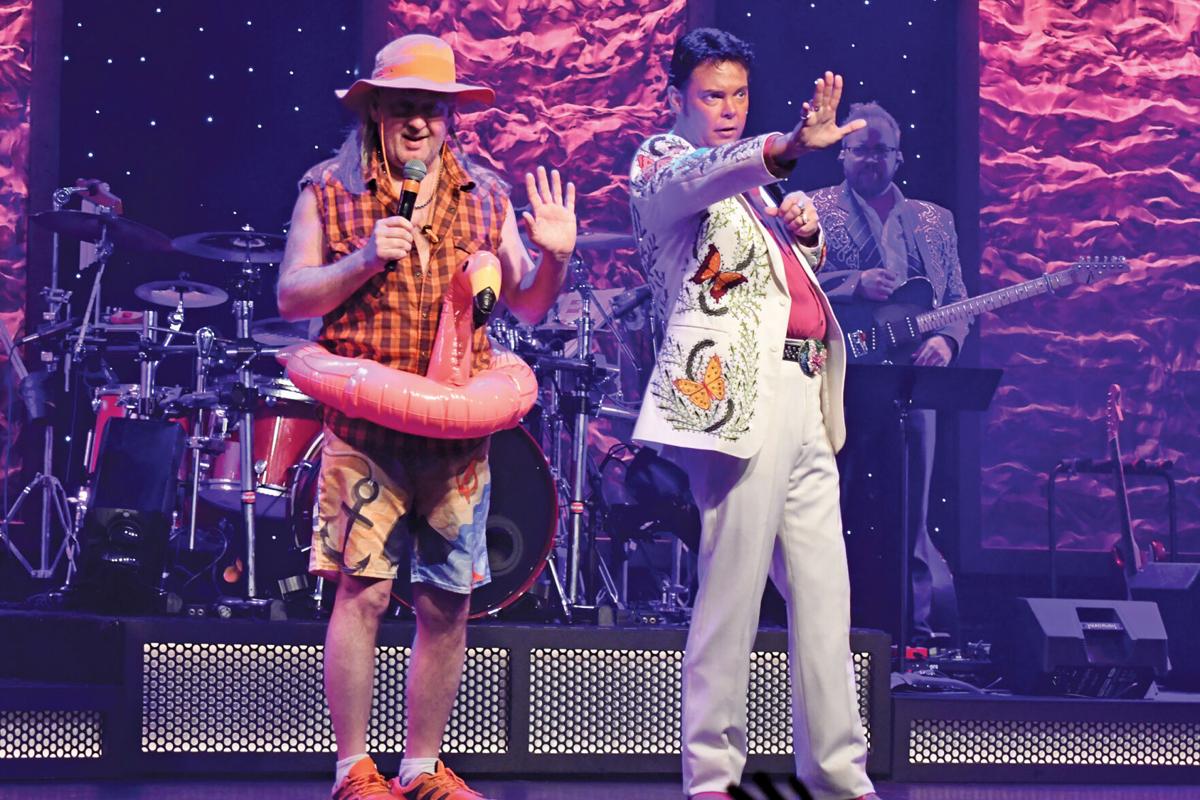 Jamie Haage as Jim Dandy as a Grand Country Resort guest talks about the water park with Emcee Mike Patrick. 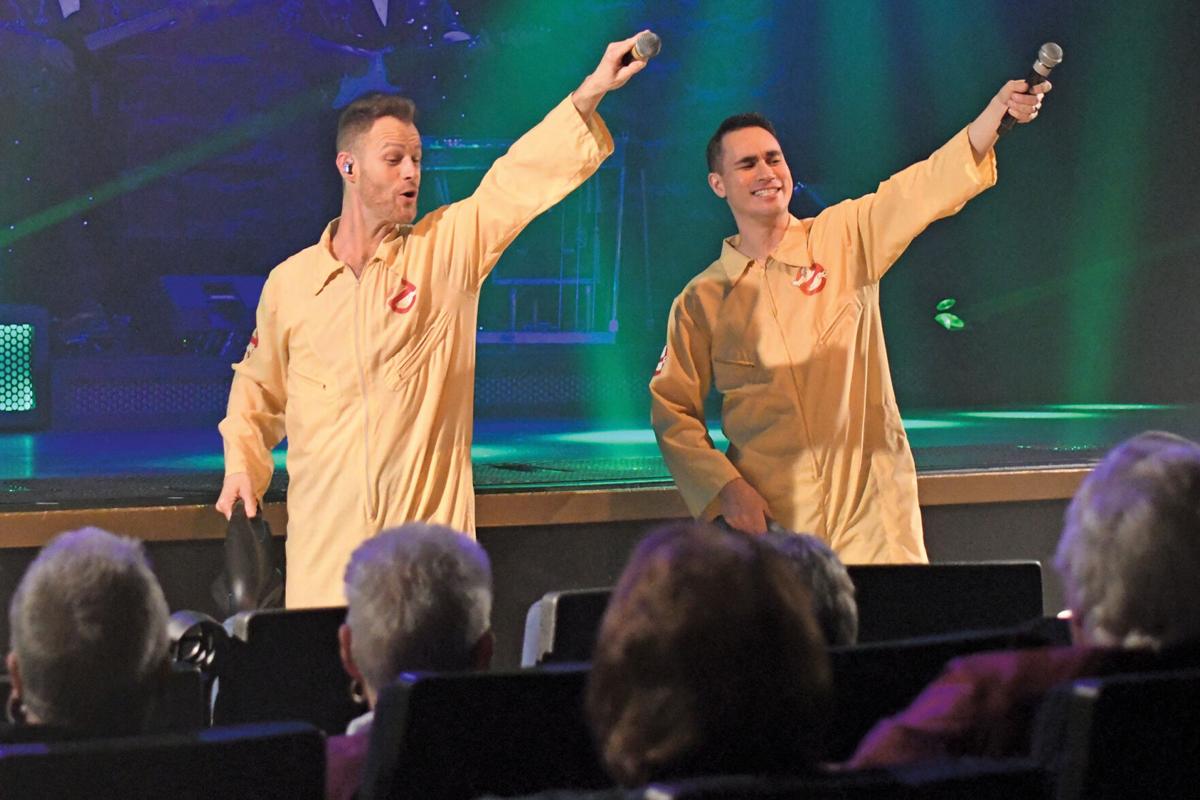 Who you gonna call? Armed with their proton packs (leaf blowers) Eric and David search the audience for ghosts. 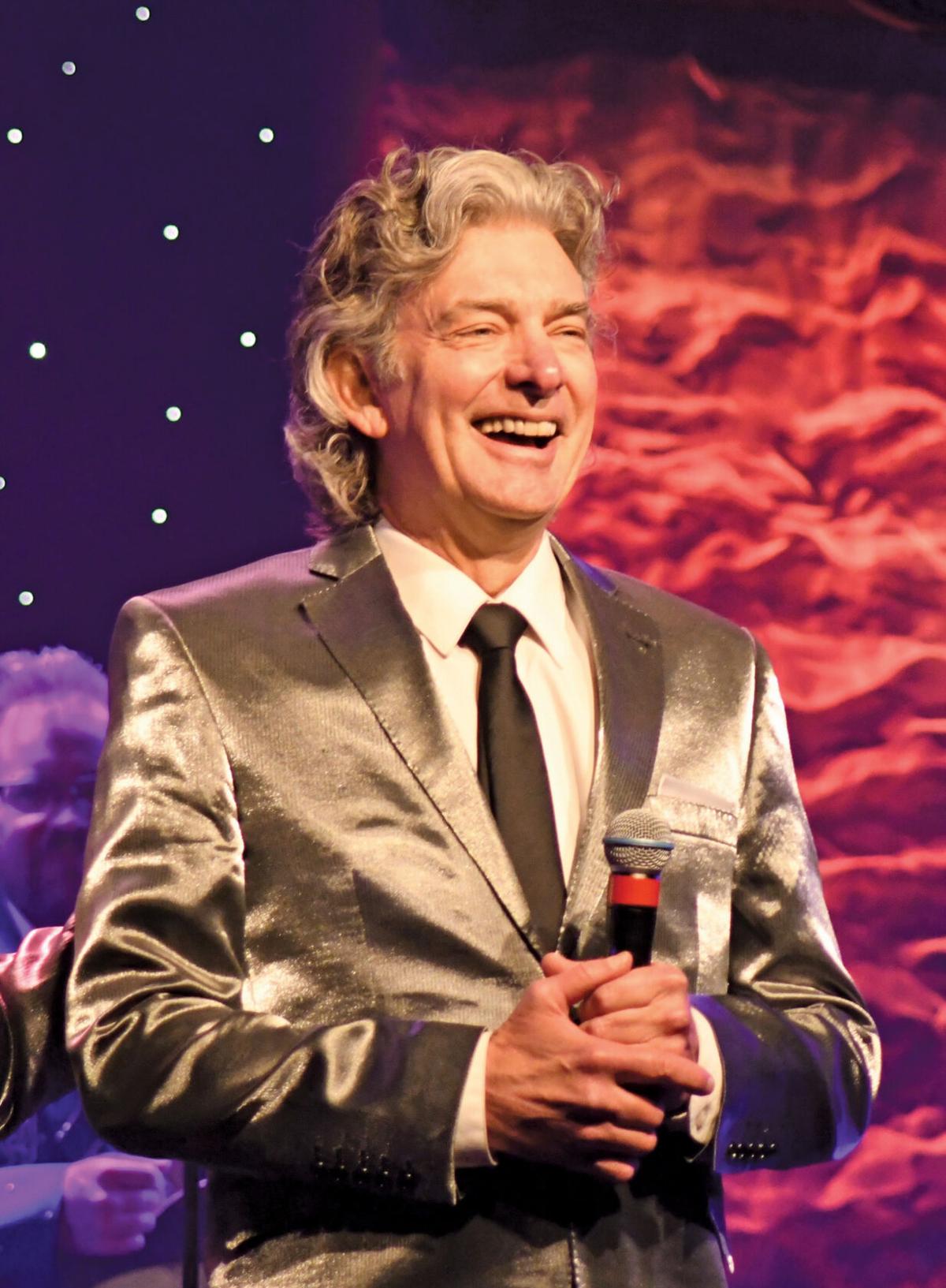 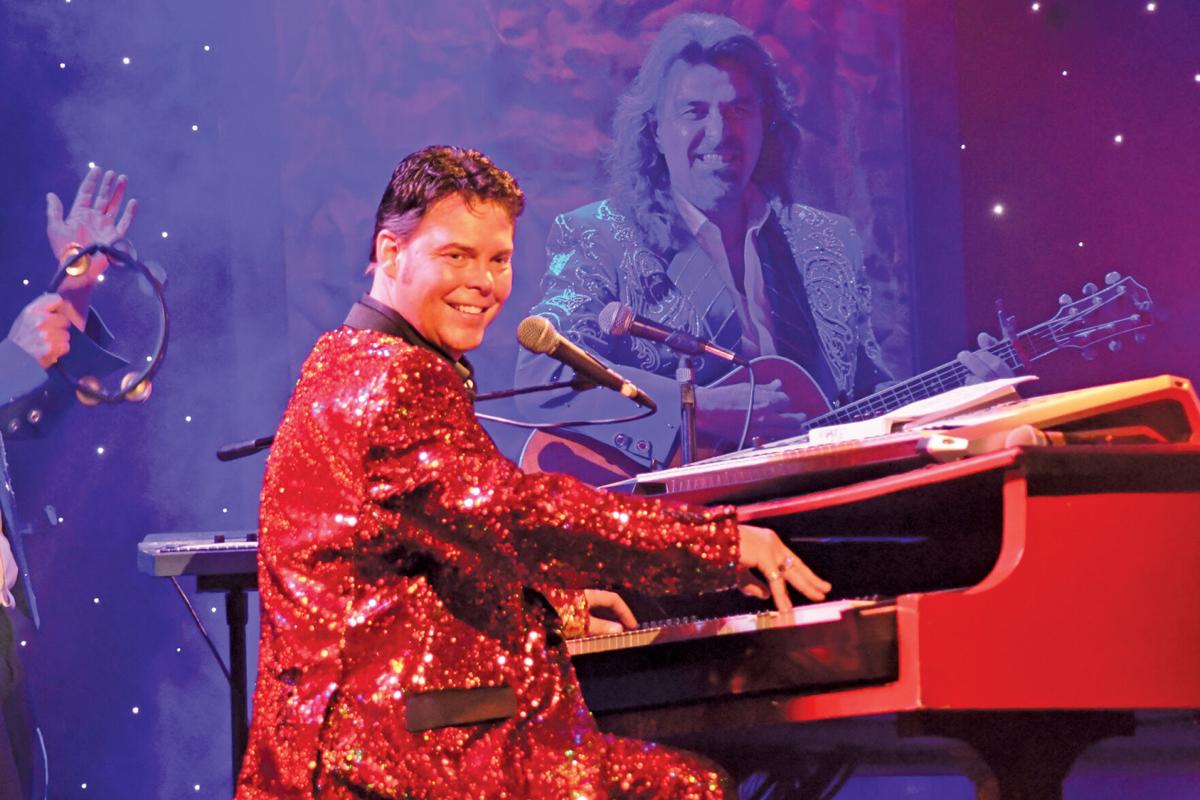 Mike Patrick wows audiences with his skills behind the piano as he performs “Whole Lotta Shakin’ Going On.’ 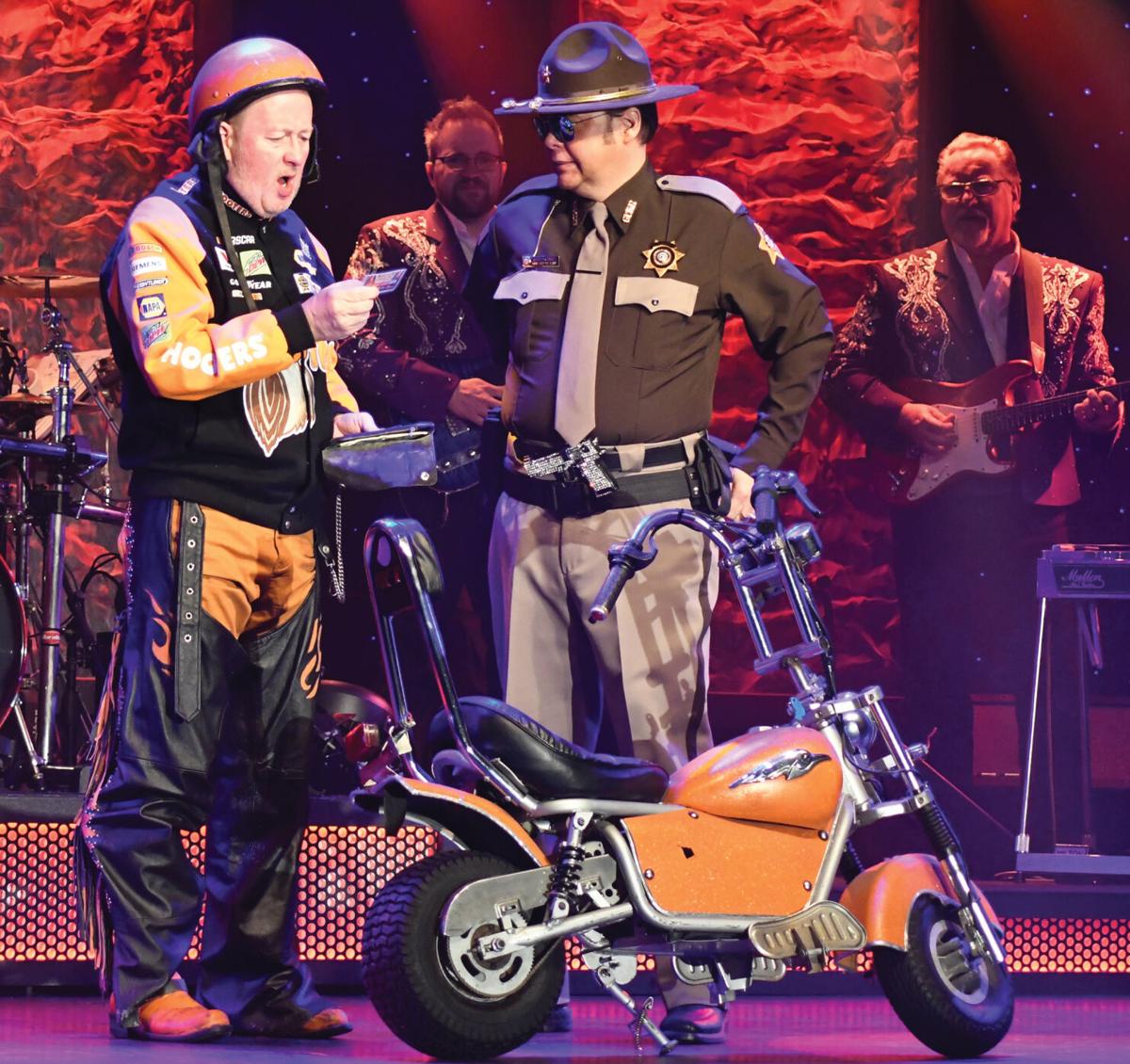 Jamie Haagy as Jim Dandy gets pulled over by Trooper Patrick at the end of a performance of “Born To Be Wild.” 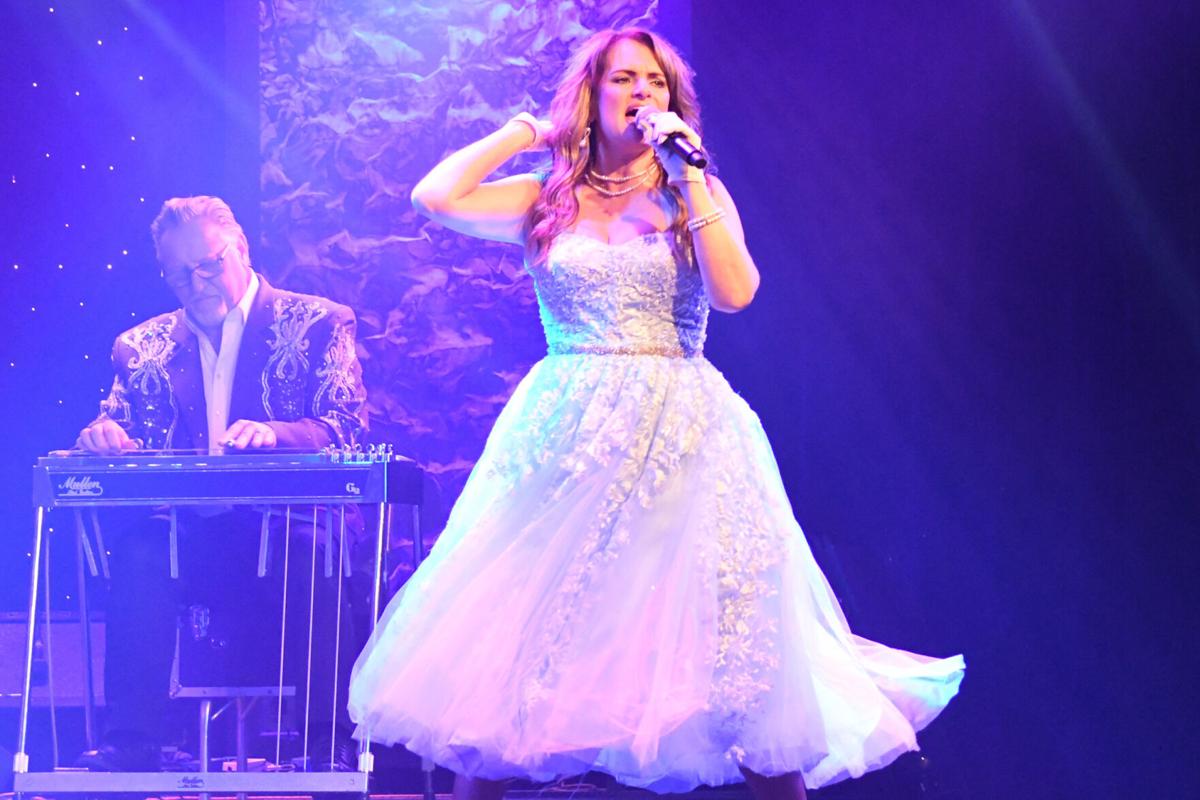 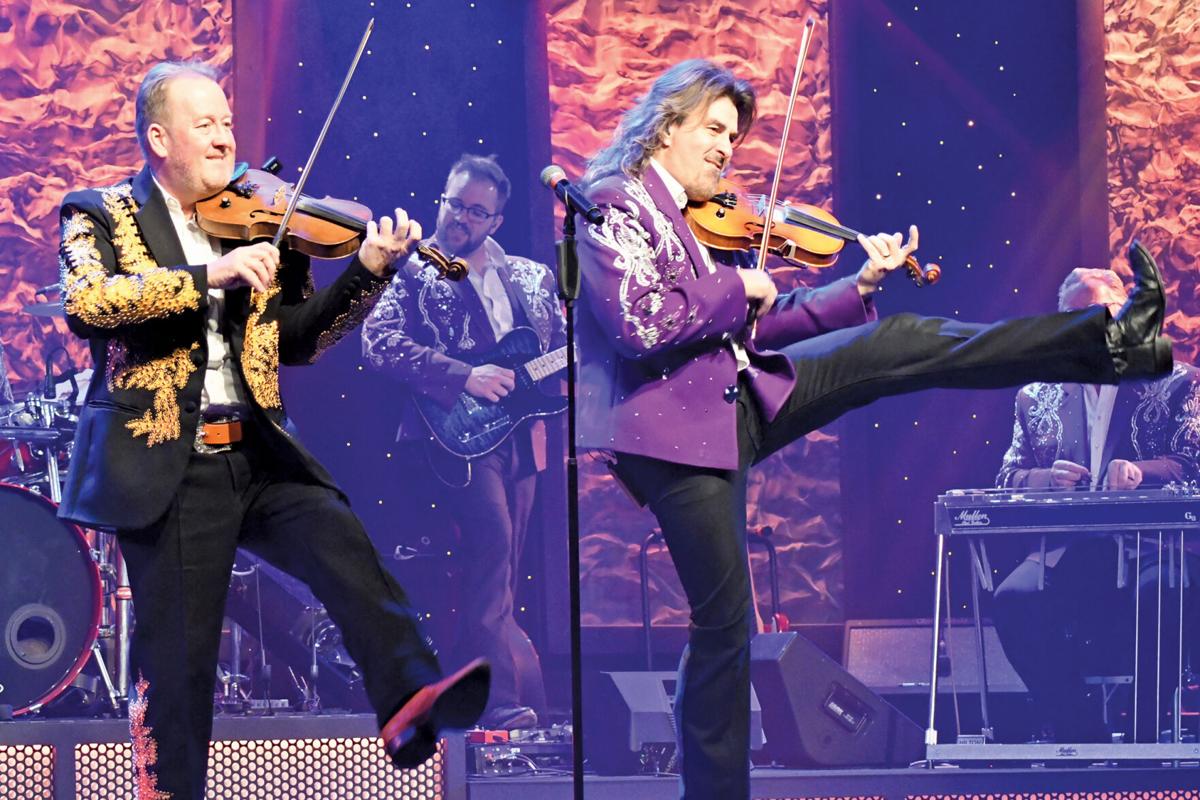 Jamie Haage and Wayne Massengale kick things up a notch while showcasing their skills with a bow. 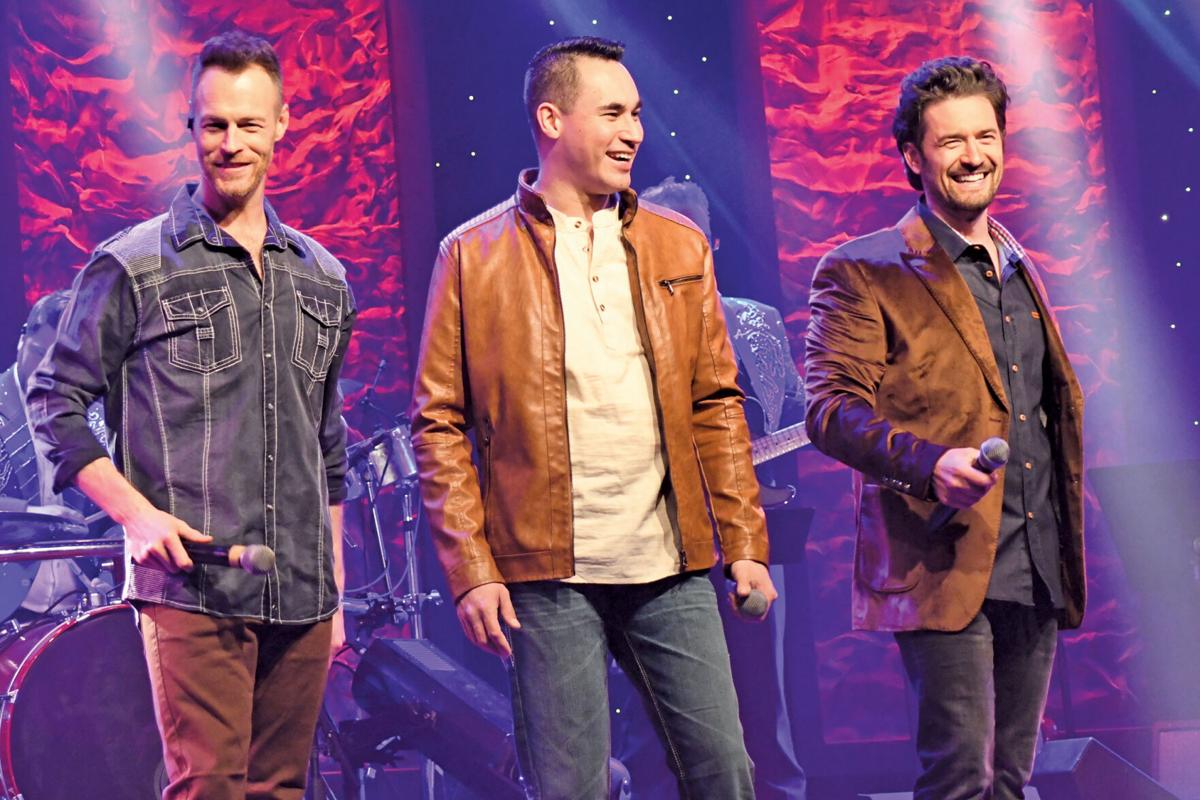 Eric Dalton, David Ragan and Luke Menard share a moment on stage during the show. 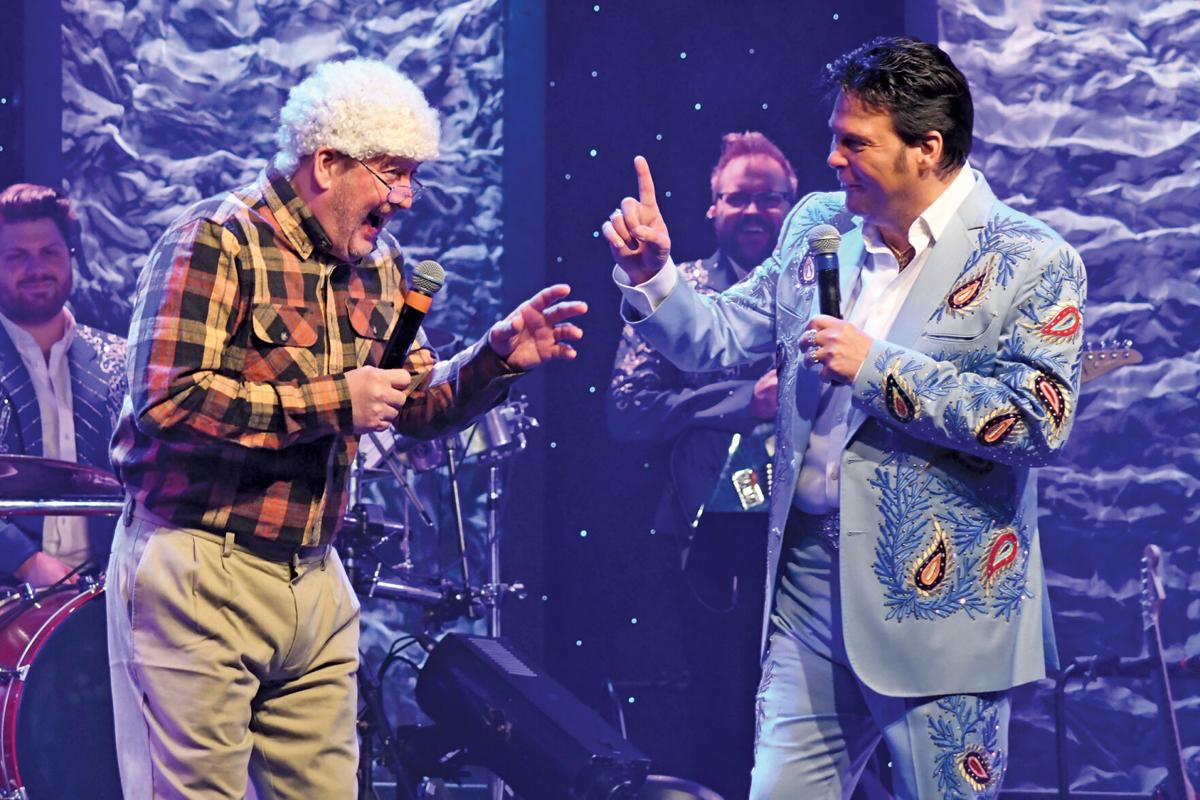 Vocalist Jackie Brown performs “Whose Bed Have Your Boots Been Under?’ as her Grand Jubilee opening piece.

Jamie Haage as Jim Dandy as a Grand Country Resort guest talks about the water park with Emcee Mike Patrick.

Who you gonna call? Armed with their proton packs (leaf blowers) Eric and David search the audience for ghosts.

Mike Patrick wows audiences with his skills behind the piano as he performs “Whole Lotta Shakin’ Going On.’

Jamie Haagy as Jim Dandy gets pulled over by Trooper Patrick at the end of a performance of “Born To Be Wild.”

Jamie Haage and Wayne Massengale kick things up a notch while showcasing their skills with a bow.

Eric Dalton, David Ragan and Luke Menard share a moment on stage during the show.

Grand Jubilee is back at Grand Country Music Hall with a new show for 2021 and a new member of their New South Quartet.

At the Grand Jubilee show on New Year’s Eve, interim New South member Eric Dalton was officially announced as the new baritone singer for the quartet. Dalton shared that he joined the show to help fill-in for the last couple months of 2020.

“During the Christmas show they needed a fill in as one of the members had moved on,” said Dalton. “So I said, ‘I’m available. I can fill in.’ And it just kind of blossomed from that. They asked me to stay on and I said, ‘Okay!’”

Dalton now fills the position held by longtime New South member Jon Drockelman, who had been a part of the Grand Country family since 2004. Drockelman left the group in order to move back to his home state of Illinois with his wife and daughter to be closer to family.

“We are beyond excited to start this new chapter in our lives,” said Drockelman in a press release. “I’ve spent the last 20 years performing in Branson. The last 17 years I’ve spent at Grand Country. It’s been an amazing ride. I have absolutely no regrets. However, it’s time for me to go home.”

“I love it. It’s great. It’s a lot of fun goofing around with them,” Dalton said. “I think it will be something that lasts a long time, so I’m excited about that.”

General Manager and Grand Jubilee Emcee Mike Patrick shared before Dalton was given the new role, they actually had another former Branson performer in mind for the spot.

“We had a former member of New South planning on coming back. He contacted us earlier in the year and was interested in coming back. When I got a spot open, he had just taken a job as the music director of a church in Michigan,” said Patrick. “What’s weird is just about two days before we found out he wasn’t coming just the first of December, I told the guys like, ‘Eric’s doing a really good job and if for reason David wouldn’t make it, I think he’s our candidate.’ The day we found out David wasn’t going to be able to do it and I called all the guys and they said ‘We didn’t want to tell Eric goodbye.’ So it just really worked out well.”

While Dalton is the newest member of New South he’s no stranger to Branson or the Grand Country stage. Prior to becoming a full-time part of the Grand Jubilee cast, Dalton was a part of the Comedy Jubilee cast. He has also performed in a variety of productions all across Branson including #1 Hits of the 60’s (& 50’s too), Hot Hods and High Heels, Thank You for the Music: A Modern Tribute to ABBA, Red, Hot and Blue! and several productions at Silver Dollar City.

“I actually realized that it was this fall, 20 years ago that I moved to this town. So it was 20 years ago,” Dalton said. “I’ve been really blessed to have a nice career in this town and what I like about this town a lot is that it’s a small town feel, but I get to do what I love to do and it kind of feels like home. So that’s kind of the reason I chose to stay here and it’s been good to me. It’s a good place.”

As a member of New South, Dalton will also appear on the Grand Country Music Hall’s Friday night television program Branson Country USA. Dalton shared that going from a traditional stage show to preparing to perform for television has included some challenges.

“Learning lyrics is not my strongest thing. These guys know a lot of them. They’ve done them throughout the years and stuff. But for me, it’s like I’m catching up every week and trying to learn everything,” Dalton said. “That’s how you grow and get better I think. By doing stuff like that. It’s getting easier.”

While Grand Jubilee took a couple weeks off at the start of the month before getting back into regular shows again, Patrick shared that they first introduced folks to their new 2021 show during their New Year’s Eve performance.

“You’re always going to see something new and different. Particularly at Grand Jubilee. I say it every year. I always get scared. How are we going to top ourselves? And then I believe we do. Audiences change and we have to change with them. This is year 19 of the show and we’re opening with Stevie Wonder and then Hughey Lewis and the News and it wasn’t that many years ago that we were opening with 40’s music or solid Oak Ridge Boys,” said Patrick. “So there’s a lot more variety, We have varied audiences between our demographic. During the week there might be an older audience, but during the weekends we have a hotel full of families, so it’s a family audience. So what we do has to appeal to both of them.”

In order to appeal to multiple generations, Dalton and Patrick both agree that it’s all about consistent variety.

“It’s a little bit for everybody. That’s kind of what you touched on more than anything. It is a great marriage of a lot of different music,” said Dalton. “There’s always something that somebody’s like, ‘Oh yeah. I really relate to that and I really like that.’”

Patrick added, “We have a good time. We love what we’re doing. It’s the fastest two hours of my day. I think that’s the same thing for audiences. Sometimes you have people who are reluctant to come to a show or am I going to give up two hours of my time and they walk out of here going, ‘Man, I loved this.’ And they become repeat visitors. I think that’s an extremely big compliment.”

From “Who’s Bed Have Your Boots Been Under” to “Tennessee River” to “Earth Angel to “YMCA” to “Who You Going to Call?” (the Ghostbusters theme song) Patrick explained they like to provide their audiences a few song surprises during the show.

“It’s fun to watch kids. You think about Ghostbusters. When did that original movie come out? (1984) So you’ve got 50 year old people that saw that as a kid,” said Patrick. “There’s this crossover with kids. They love that. But I just love on YMCA watching 80 year old women standing up and YMCA-ing with us.”

While guests of Grand Jubilee should come to the show ready to tap their feet and clap their hands to the array of music, they should also come prepared to laugh hard to the comedy of Jamie Haage as Jim Dandy.

“Jamie Hagey and I have worked together 30 plus years. I grew up in Nixa. He grew up in Branson. Although we didn’t grow up together, we’re very similar,” said Patrick. “He loved the Carol Burnett show. A lot of the comedy you see, like if we ever get stuck somewhere, we’ll resort to something we know. You’ll see us pulling elements of Carol Burnett or The Baldknobbers.”

Through January 30, Grand Jubilee is offering area appreciation tickets for $10 each for residents of Taney, Stone and other surrounding counties.

“I look back as a kid when Conway Twitty was here and Loretta Lynn. I never went and saw them,” said Patrick. “I think sometimes as a local particularly, ‘Oh, I’ll go see them one of these days.’ Particularly these winter months, we’ve got area appreciation, come out and see us … I encourage everybody. Take a night off and come see the show.”

Show times are at 7:30 p.m. Shows are currently everyday except Sunday and Wednesday. At the end of February, shows will be held nearly every day but Sunday.

For additional information on Grand Jubilee and the other shows and activities offered at Grand Country Music Hall visit grandcountry.com.