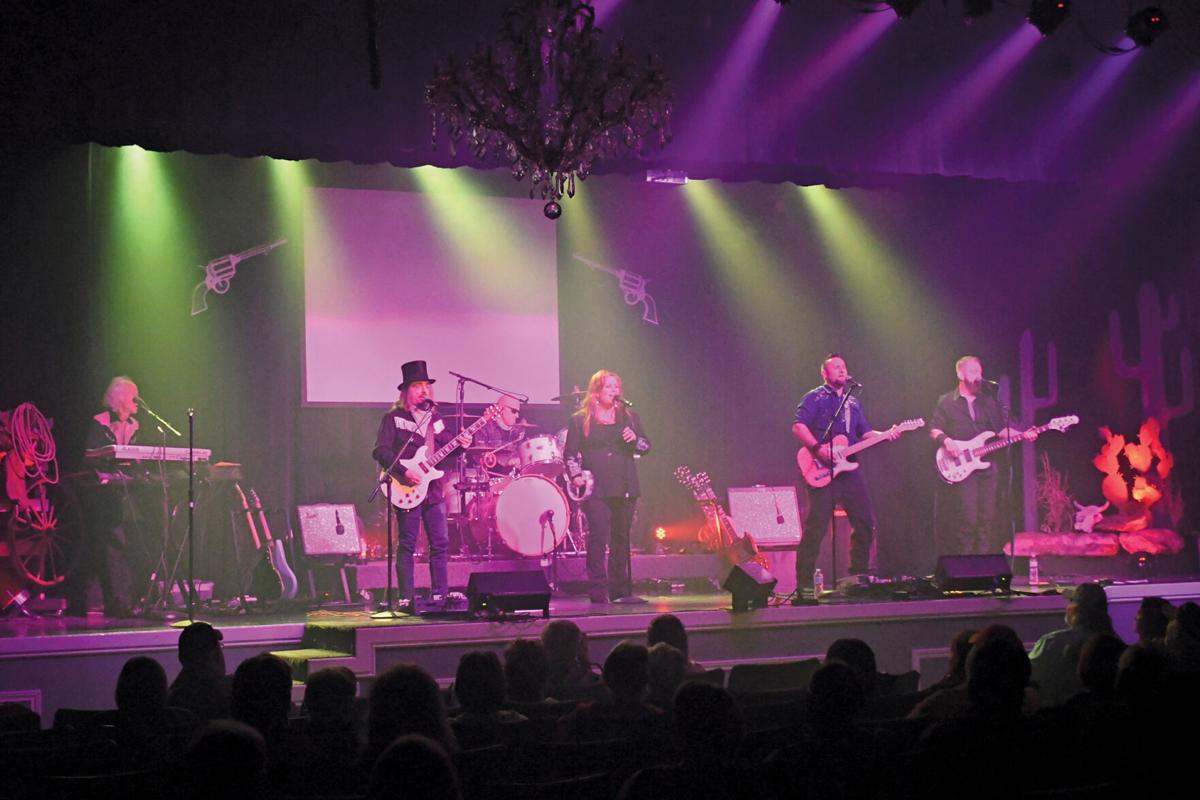 The Outlaw Eagles now call the Branson Star Theatre home and performs shows on Mondays at 8 p.m. inside of the little theatre. 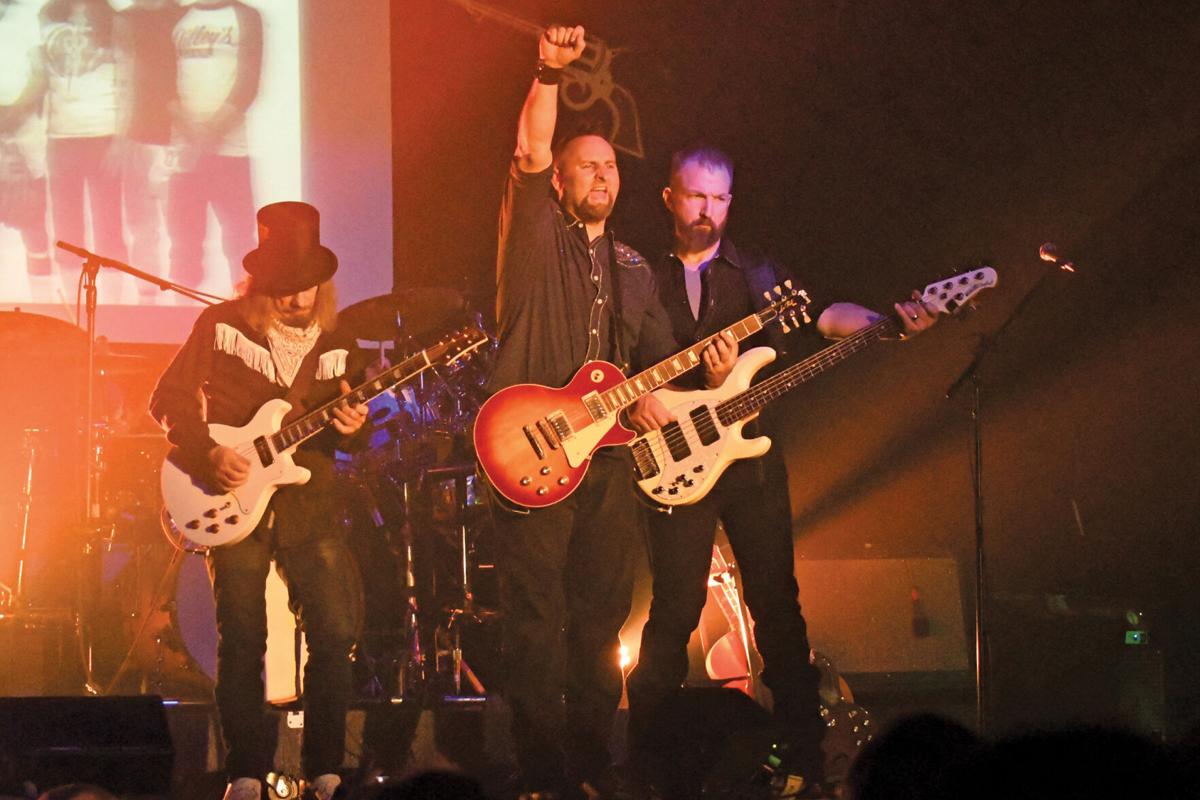 Aaron Napier (center) showcases his excitement during the show with Larry Holiday and Steve Leach. 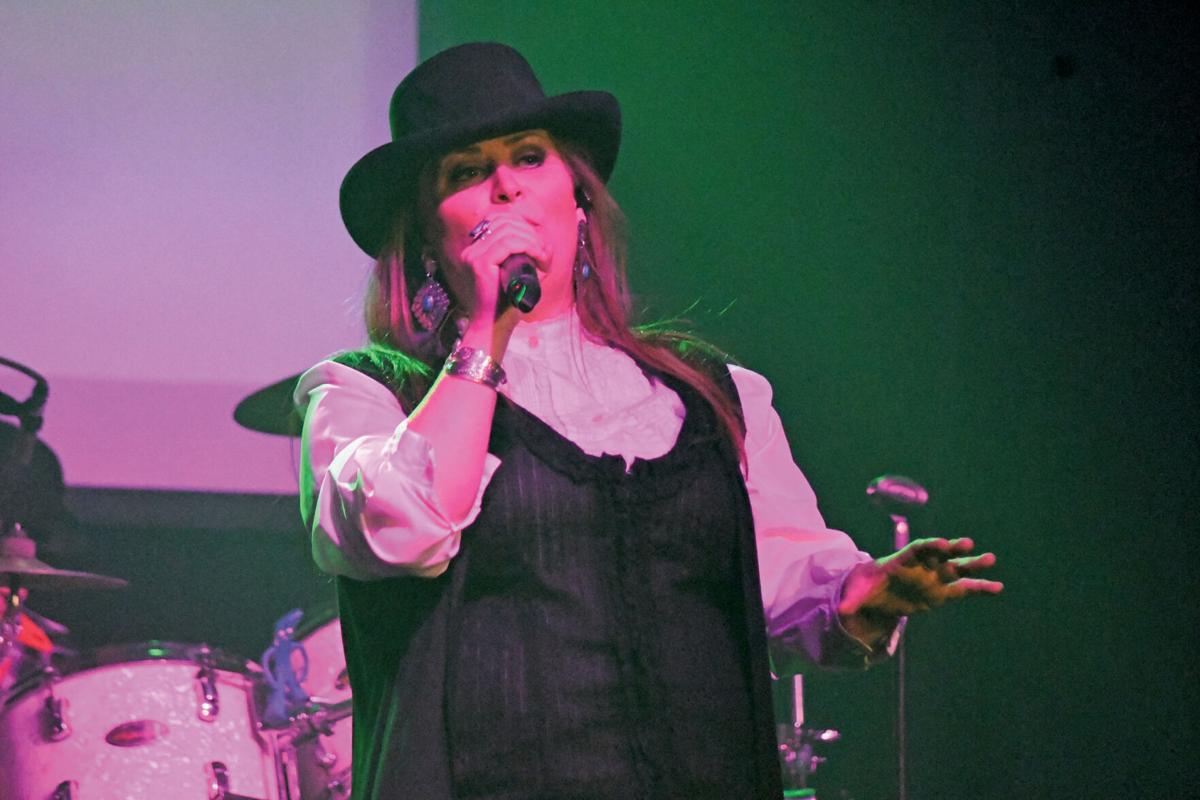 Singing the parts of Linda Ronstadt in the show is Vocalist Georgina Holiday, who also performs with Mickey Gilley. 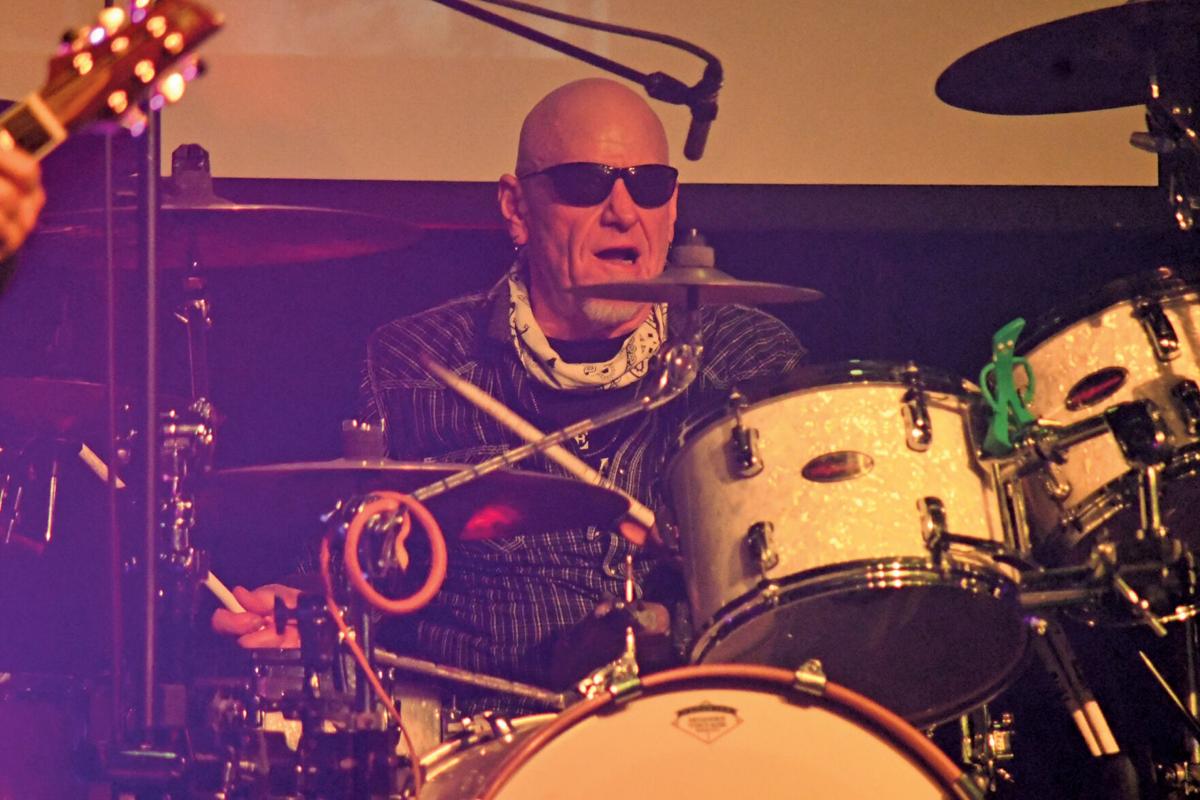 The Outlaw Eagles show at the Branson Star Theater features the talents of Doug Clifford on the drums. 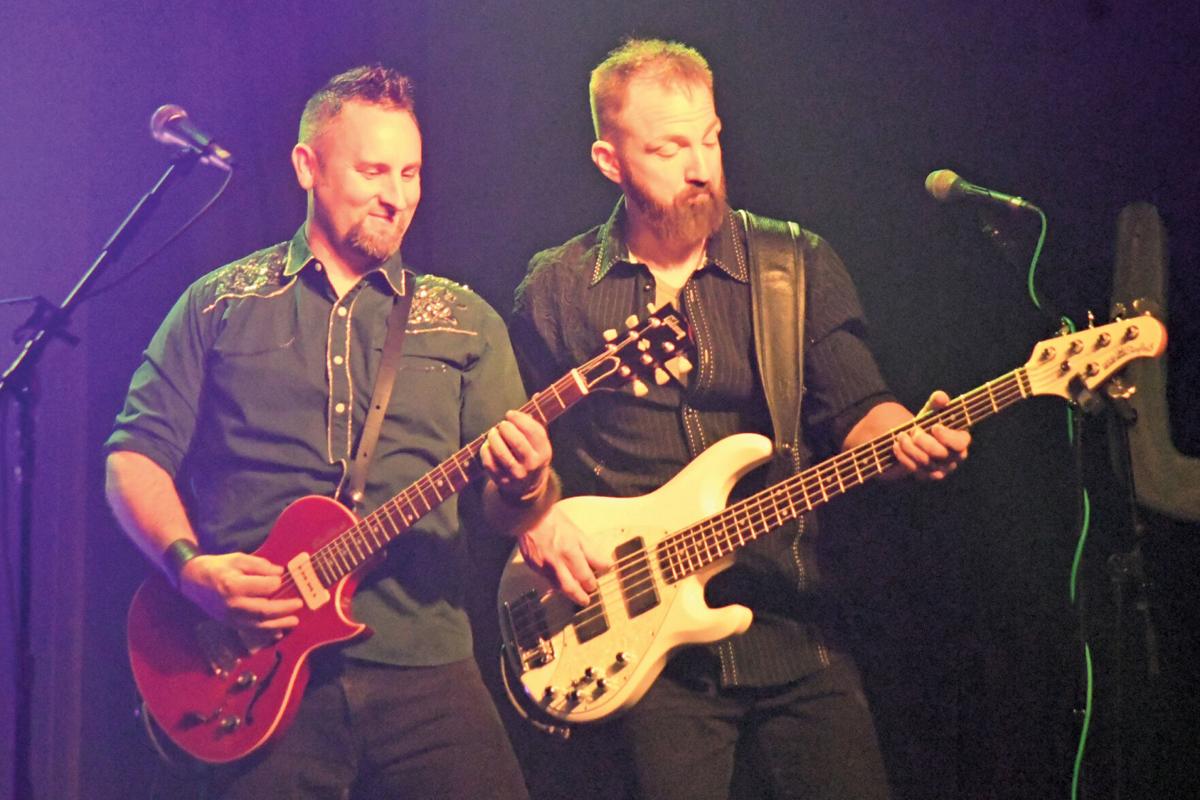 Aaron Napier and Steve Leach team-up to showcase their respective musical abilities with a guitar and a bass. 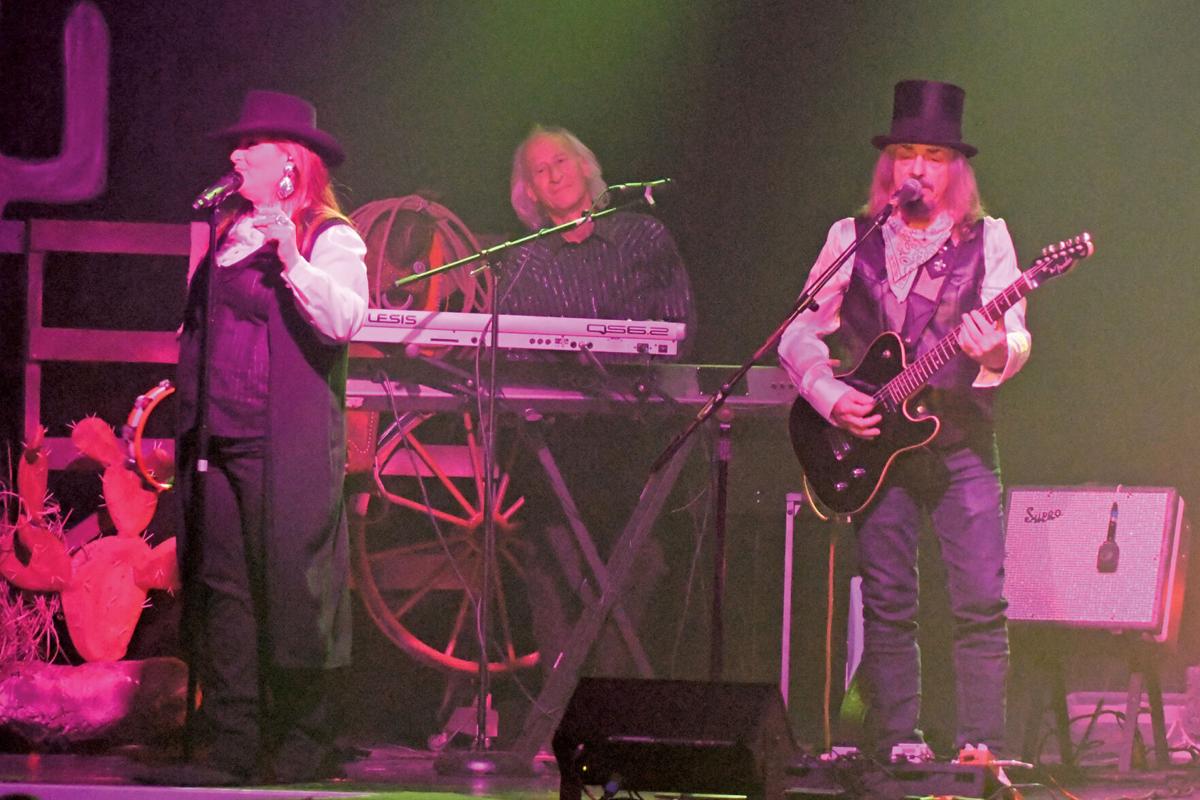 Georgina Holiday, Kenny Christensen and Larry Holiday perform a piece together during The Outlaw Eagles show. 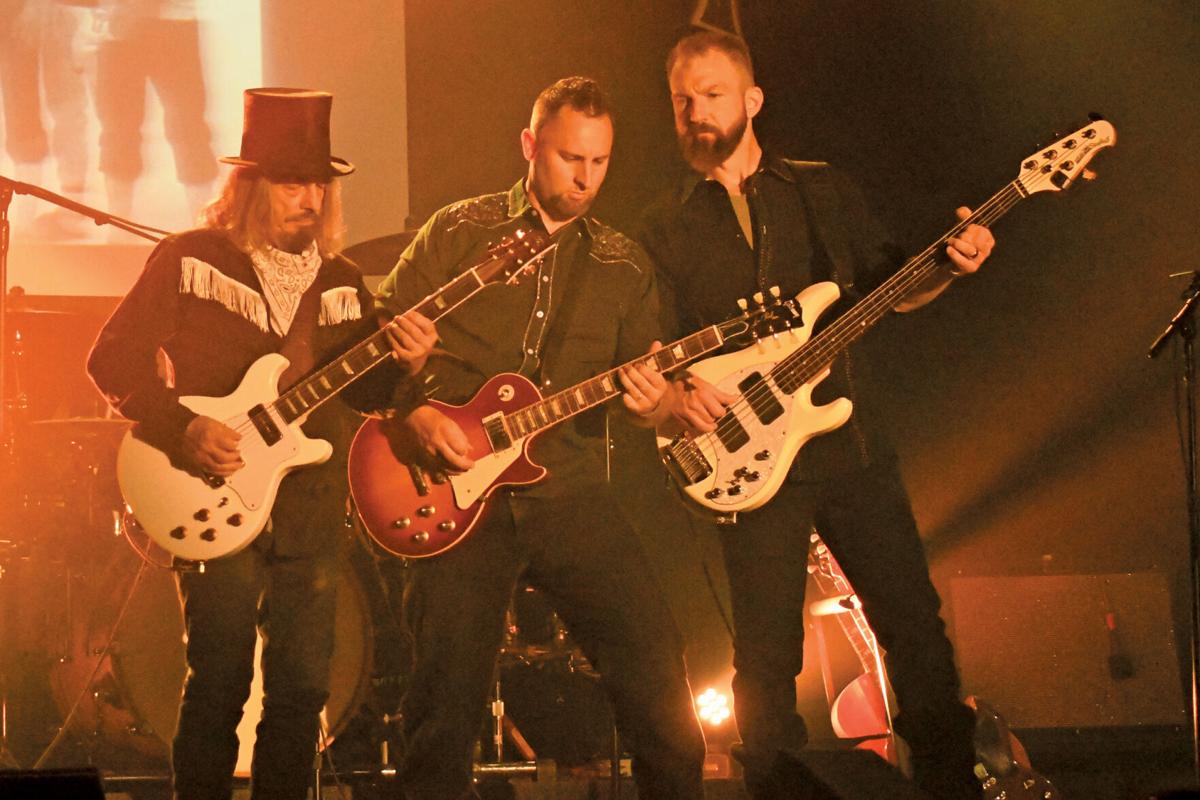 The Outlaw Eagles now call the Branson Star Theatre home and performs shows on Mondays at 8 p.m. inside of the little theatre.

Aaron Napier (center) showcases his excitement during the show with Larry Holiday and Steve Leach.

Singing the parts of Linda Ronstadt in the show is Vocalist Georgina Holiday, who also performs with Mickey Gilley.

The Outlaw Eagles show at the Branson Star Theater features the talents of Doug Clifford on the drums.

Aaron Napier and Steve Leach team-up to showcase their respective musical abilities with a guitar and a bass.

Georgina Holiday, Kenny Christensen and Larry Holiday perform a piece together during The Outlaw Eagles show.

For the 2021 Branson show season, The Outlaw Eagles have found a new home at the Branson Star Theater.

Lead Guitarist and Vocalist Larry Holiday explained The Outlaw Eagles show is a reinvented version of his Take It to the Limit Eagles tribute show, which formally called the Branson Tribute Theatre home.

“The Outlaw Eagles came out of the inspiration of The Eagles coming out of Linda Ronstadt’s band and the fact that Jackson Browne and JD Souther also were outside writers that worked for them,” said Holiday. “I started thinking, outside, outlaw, Outlaw Eagles. It just made sense to me. Then we did the old west theme. We’re trying to take people back and give them that feeling that they went back to the old west.”

While he loved The Eagles songs they had in the other tribute show, Holiday said he was ready to try something different.

“I felt it was time to spice the show up and put some more variety in it,” said Holiday. “Adding a little bit more Joe Walsh, a couple songs from Jackson Browne and then adding my wife doing the Linda Ronstadt, I just thought it was the cherry on the top of the cake.”

Holiday also explained how the band found their way to the Branson Star Theater.

“They needed someone to play for New Year’s Eve (2020) out in the lobby, so they contacted us and we did that for them,” said Holiday. “They had somebody else I think they were planning on putting in here, but after they heard us, they did a switch. They said, ‘We’d like to have you guys do the little theatre if you’re not busy this year.’ We worked a deal with Stevie Lee Woods and that’s why we’re here.”

As the library of Eagles songs is quite extensive, Holiday explained what songs those attending their show can expect to hear.

“They’re going to hear the iconic songs by The Eagles. In fact I kind of concentrated on the first three albums, because those are the songs that really made them famous and then the ‘Hotel California’ and ‘Life in the Fast Lane’ off of the fourth album,” said Holiday. “I’m pretty concentrated on those records and the second record especially, because that was Glenn’s vision for ‘Desperado,’ a cowboy concept album. In fact the record company accused them of doing a cowboy concept record and didn’t get behind the record. It wasn’t until Linda Ronstadt covered ‘Desperado’ that actually made disc jockeys look for a song in there they could play and they found ‘Tequila Sunrise’ and it broke the top 10.”

Vocalist Georgina Holiday, wife of Larry Holiday, shared that another song they have in the show, ‘Silver Threads and Golden Needles,’ is one that Linda Ronstadt performed with The Eagles.

“That’s one that a lot of people, who may just be a little older, 60s, 70s, 80s or somewhere around there — because that’s about our age — really remembered those songs,” said Georgina. “That particular song is on the country side, so it’s really cool to mix that Linda Ronstadt in with the rock ’n’ roll.”

Guitarist and Vocalist Aaron Napier added the mixture of rock ’n’ roll and country creates the perfect atmosphere for when they return to the stage after intermission.

“It also gives us an opportunity with the cowboy stuff and like we do in the second half, it really gets to bring us to those softer songs like the ‘Tequila Sunrise’ and things people remember so dearly,” said Napier.

Both Georgina and Larry said that they also try to pick and perform songs that audiences won’t hear anywhere else.

“I’ve had people actually come up and say that they love ‘Doolin-Dalton’ and no other bands cover it and they’re so incredibly thrilled when we do it,” said Georgina.

“That one and ‘Outlaw Man’ are the two songs I always get requests for when we were at the old theatre,” said Larry.

Napier added that there are certain songs that you just have to hit, but when selecting the other songs for the show, it can be challenging.

“Every night you get people that come up and they’re like ‘Why didn’t you do this? Why didn’t you do that one?’ Realistically you have enough time to do a certain amount of songs, so you try to find something that caters to everybody,” said Napier. “We try to find something, like Larry said, that really fits the genre of what we’re trying to go for in the show. We really had to look really close at that song list.”

Joining the Holidays and Napier, The Outlaw Eagles also features the talents of Doug Clifford on drums, Kenny Christensen on piano and vocals and Steve Leach on bass and vocals.

From shows to attractions, the pandemic effected Branson as a whole in 2020. Larry said The Outlaw Eagles were no exception.

“We lost out on about $60,000 worth of bookings for last year that we had booked previously when we knew The Tribute Theatre was going to close. We kind of prepared for last year, but then the pandemic put an end to all that,” said Larry. “We decided to stick together and we rehearsed and kept the product fresh. We basically wanted to be sharp and on it for when things opened back up, so we’d be ready. We played a handful of gigs last year.”

Georgina added why she thinks the band was able to stick together through the pandemic.

“I think it was the passion that everyone in the band had to keep going, because the music is one of the best songbooks out there,” said Georgina. “You’re talking about iconic Eagles and Linda Ronstadt. They’re just iconic names and great music for all different ages and the band was just inspired to stay together.”

Looking forward to the rest of the year, Larry shared his hopes for Branson for 2021.

“I think we’re kind of the template for the rest of the country right now,” said Larry. “I’ve seen so many people mentioning our name and wishing, like my friends who live out west are wishing they had enough sense that we have here.”

Napier said that he feels people are ready to get back out, which will be a good thing for Branson.

“We feel like people are ready to start getting together and enjoying music again just like we’ve been doing for so many years we’ve been so blessed to do so,” said Napier. “We’re hopeful that the town will be able to do that and that the people will feel safe enough to be able to do that. Just get out and forget about life for a while and come out and have a great time.”

Georgina added that when the audiences are at the show, you can tell they’re excited to be there.

“People are just so receptive and they’re so incredibly happy to get out, share good music with good friends,” said Georgina. “You can still social distance at some of the theaters and/or wear a mask if that’s how you feel safe, but they’re just happy to get out of the house. It’s nice to have Branson where people can still come and enjoy themselves in a family environment and feel safe.”

The Outlaw Eagles perform at the Branson Star Theater on Mondays at 8 p.m.

For additional information about the show or for tickets visit bransonstartheater.com or visit The Outlaw Eagles page on Facebook.