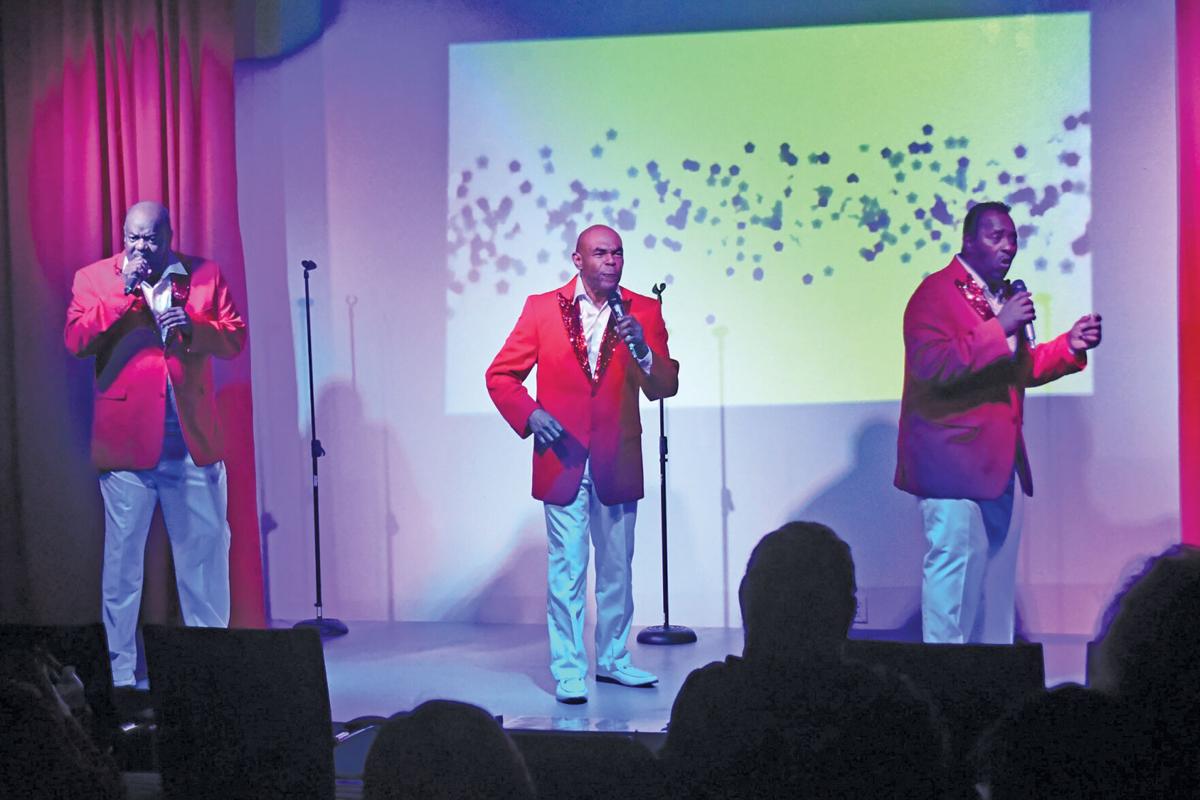 Dancing in the Streets-A Motown Revue can be seen Thursdays and Saturdays at 7 p.m. inside The Ruby Room at the Majestic Theatre in Branson. 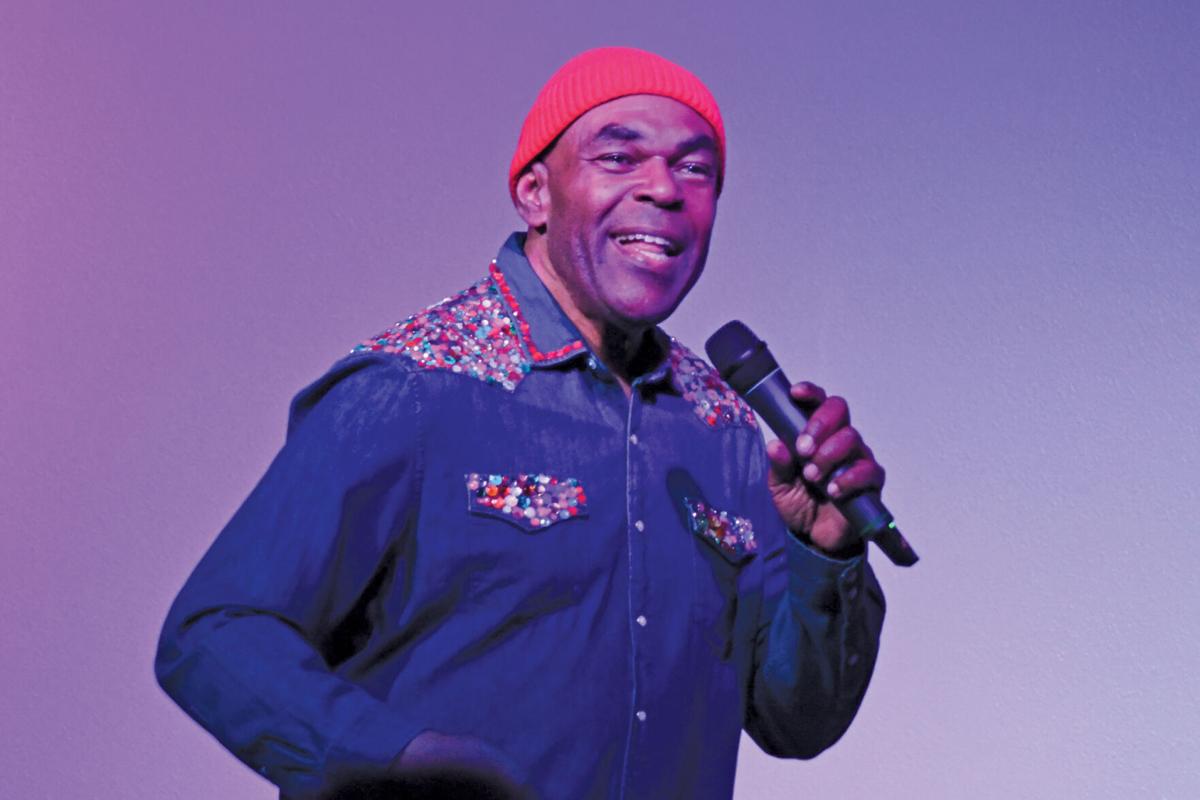 Derek Ventura brings the 1970s music of Marvin Gaye to the stage during the show. 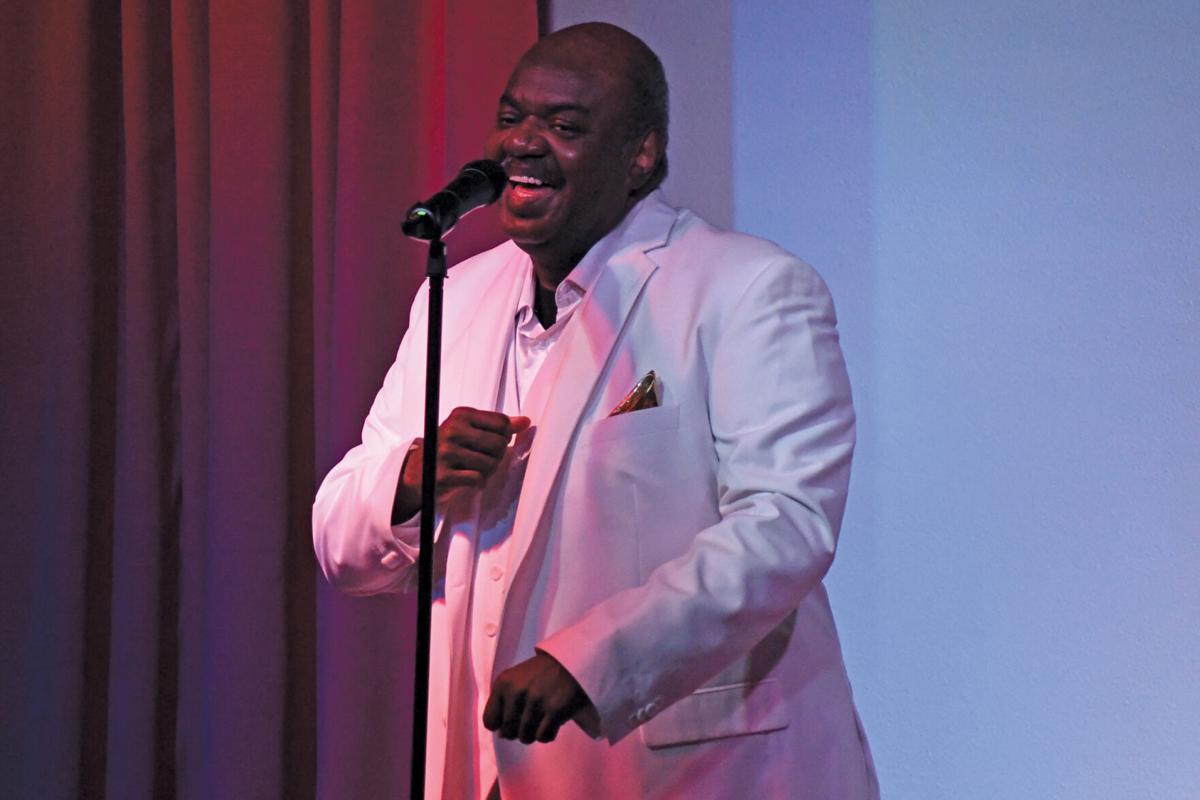 Earl Lee begins to move to the music while he sings as a part of Dancing in the Streets-A Motown Revue. 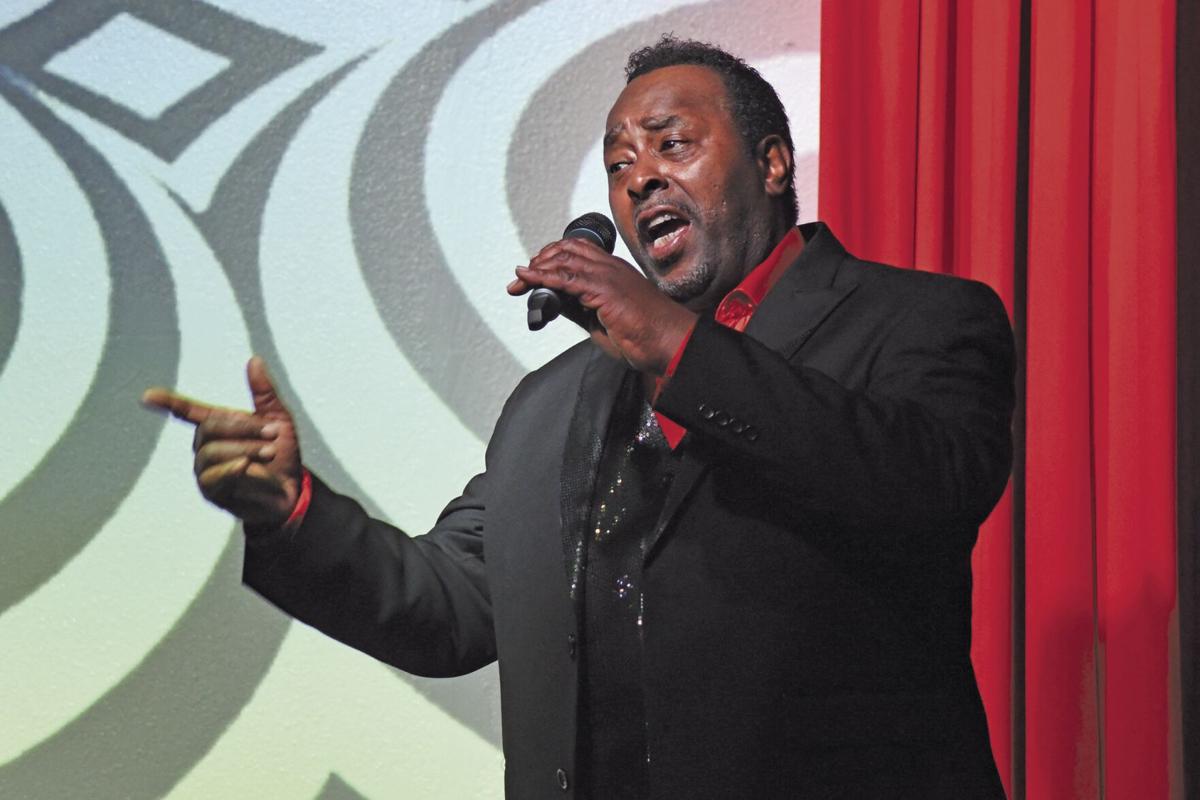 Ditannual ‘Doc’ Hutchinson performs a solo piece during a melody of music from The Temptations. 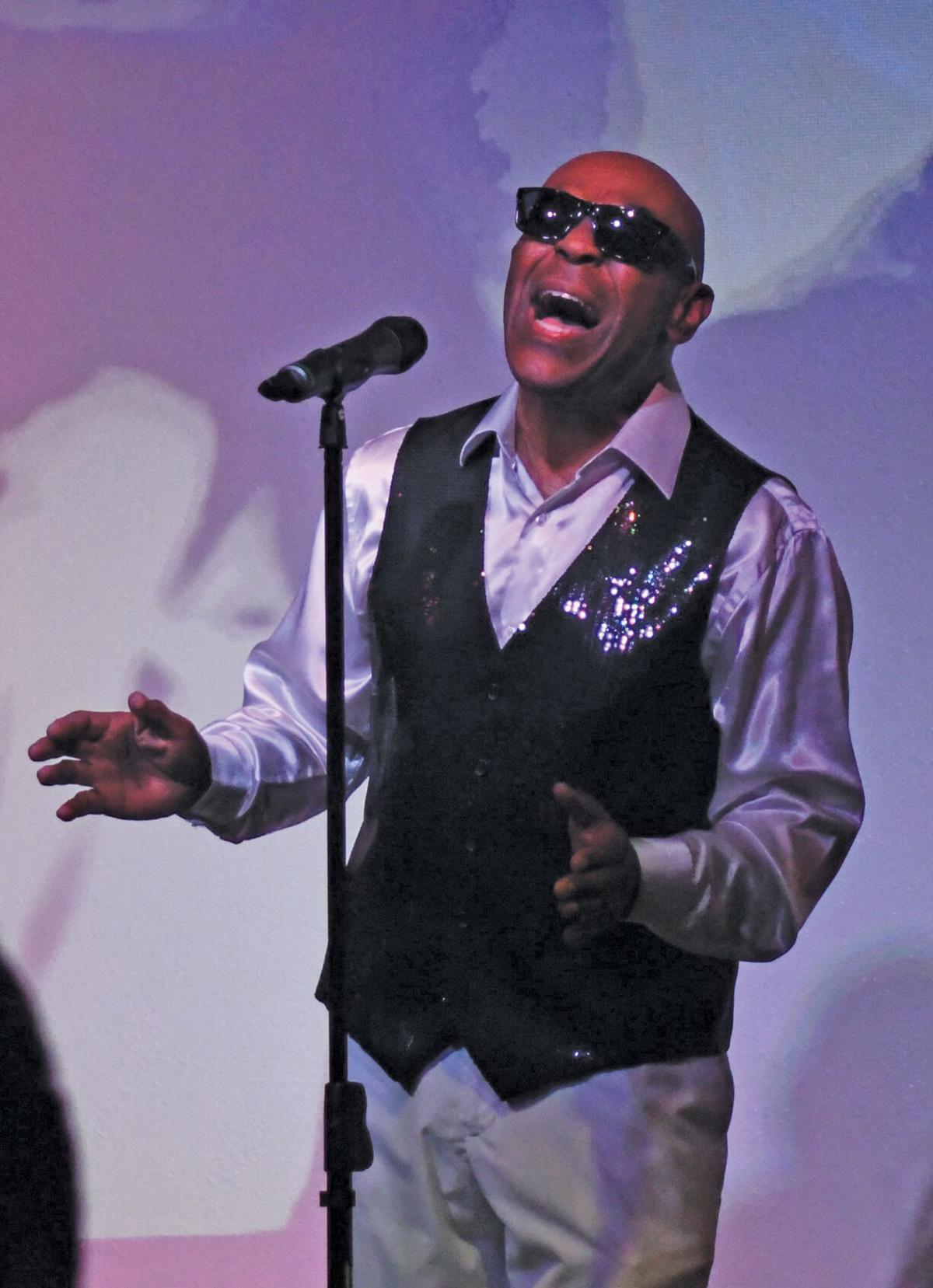 Derek Ventura performs some of Stevie Wonder’s greatest hits during the Dancing in the Streets-A Motown Revue show. 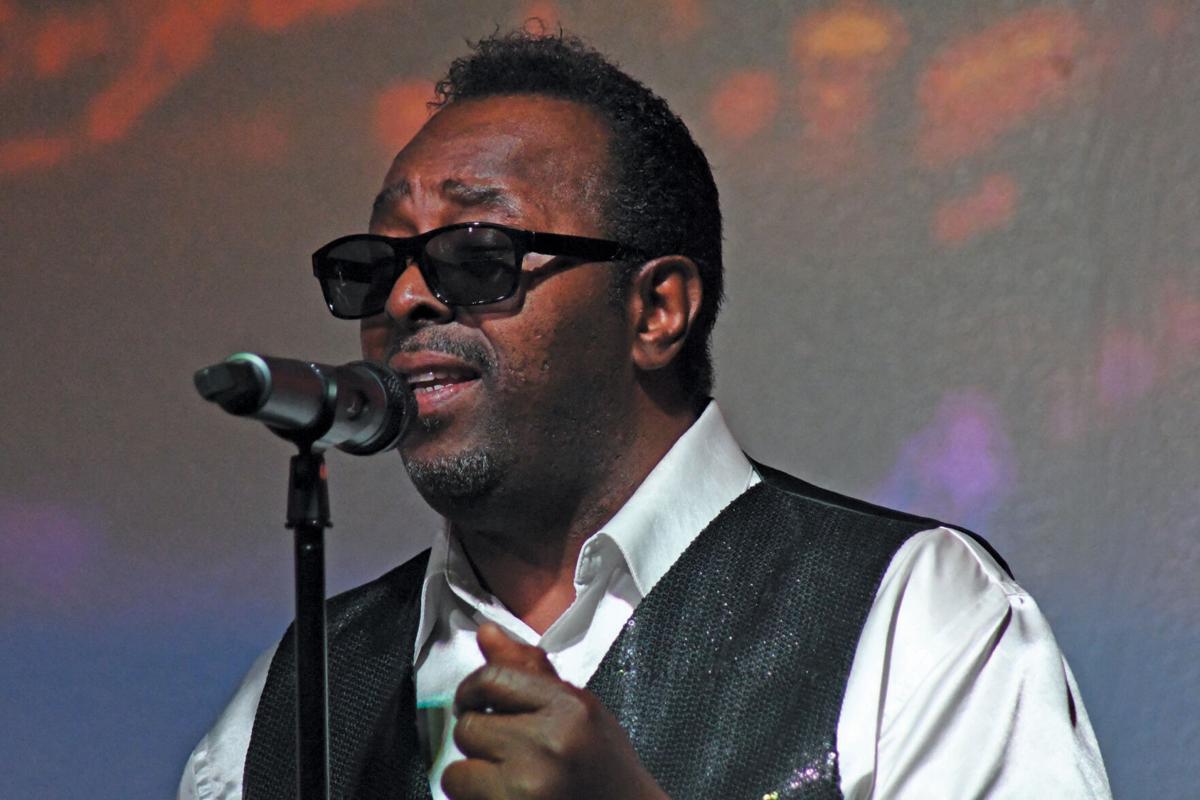 Doc Hutchinson performs some of Stevie Wonder’s greatest hits during the Dancing in the Streets-A Motown Revue show. 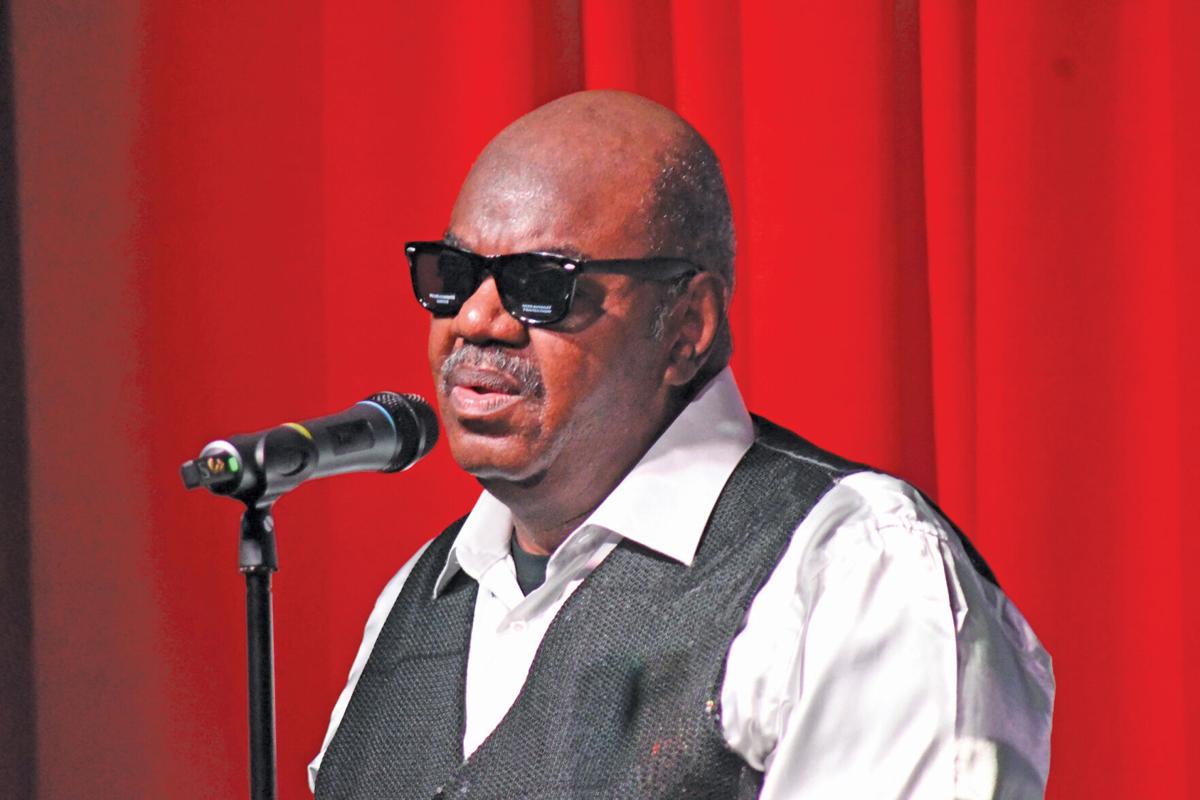 Earl Lee performs some of Stevie Wonder’s greatest hits during the Dancing in the Streets-A Motown Revue show.

Dancing in the Streets-A Motown Revue can be seen Thursdays and Saturdays at 7 p.m. inside The Ruby Room at the Majestic Theatre in Branson.

Derek Ventura brings the 1970s music of Marvin Gaye to the stage during the show.

Earl Lee begins to move to the music while he sings as a part of Dancing in the Streets-A Motown Revue.

Ditannual ‘Doc’ Hutchinson performs a solo piece during a melody of music from The Temptations.

Derek Ventura performs some of Stevie Wonder’s greatest hits during the Dancing in the Streets-A Motown Revue show.

Doc Hutchinson performs some of Stevie Wonder’s greatest hits during the Dancing in the Streets-A Motown Revue show.

Earl Lee performs some of Stevie Wonder’s greatest hits during the Dancing in the Streets-A Motown Revue show.

After only being able to host three performances for its debut 2020 season in Branson, Dancing in the Streets — A Motown Revue is finally getting the chance to offer a full season of shows this year.

The show opened for the 2021 season in April, and Producer Derek Ventura said he has plans to host shows every week for the rest of the year.

“Dancing in the Streets is a feel good time capsule show that has the theme and the plot to basically tell through song, how a man in the 60s, in troubled times, had borrowed $800 from his parents and he turned it into this empire that we all known today as Motown,” said Ventura. “What people don’t know is, that out of all of the acts that came out of the Motown stable, the founder, named Berry Gordy, only made superstars out of only eight of them. That was The Supremes, Marvin Gaye, The Four Tops, Smokey Robinson and The Miracles, Michael Jackson and the Jackson Five, (The Temptations, Gladys Knight & The Pips) and Stevie Wonder.”

Ventura said his goal for this show, and any show he does, is to make it entertaining, informative and educational.

“I give you a glimpse at how these people got their start and some of the songs that they made famous,” said Ventura. “In having my own theatre, I wanted to put my stamp on telling the story of how Motown came to be. Everyone has a favorite Motown song … but people don’t know how that song came to be or who sang it. All they know is that it’s on my iPod or I hear it on Spotify. I just wanted to put my stamp in terms of telling the story in sight and sound.”

As many of these Motown acts found themselves with numerous top charting hits, Ventura said it was also his goal to perform as many of those classics as possible during the show.

“I started with all of those that were in the No. 1 position. Everything that reached the top 10 or the top five, only because I knew those were crossover hits that appealed to everyone. Then I created those songs in medleys and then I created all of the choreography. Then all of the tracks I created at home, because I have a recording studio at home. I recorded all of the tracks and I put it here. Then I had to add video,” said Ventura. “It was a process just to get this show to be both entertaining and educational and inspiring and just to have people walk out with that ‘big chill’ kind of a feeling.”

Joining Ventura on stage for Dancing in the Streets are the talented Ditannual ‘Doc’ Hutchinson, a longtime Branson performer, and Earl Lee, who hails from St. Louis.

“(Hutchinson’s) has been in several of the shows in town here. When I had searched for two individuals to be in my Doowop & The Drifters show, I asked around and I found him and he told me that he was familiar with a lot of the songs and he’s been with me ever since,” said Ventura. “Earl, he answered an ad that I had looking for performers when Kay and I started the theatre here. He relocated here.”

As a part of the show does feature The Supremes, an all female group, Ventura said it gave them the opportunity to also include some comedy in the show.

“I could not afford to hire three ladies in the infancy of owning a new theatre. I decided, ‘Hey, I think that Branson is ready for the other side of the coin.’ So we dress up (in gowns) as The Supremes, however, it is a parody piece. Everyone knows that we look or act nothing like The Supremes, but we cover the music and the audience gets to have a chuckle and that’s what it’s all about.”

Dancing in the Streets and Ventura’s other production, Doowop & the Drifters, can be found inside The Ruby Room, which is located on the third floor of Branson’s Majestic Theatre. The creation of the shows and The Ruby Room itself are the results of a five year journey that begin when Ventura and his wife, Kay, moved to Branson from Colorado.

“My wife and I, we were approaching retirement. I didn’t want to go out on the road anymore, even though at that time I had cut back from a lot of road work,” said Ventura. “It was just time for a change, so we wanted one final destination to retire in that spoke to us, but for me not to retire from the entertainment industry.”

After a weekend visit to Branson, Ventura said they knew this was the place they were looking for. From 1972 to 1984, Ventura was the lead sing of the oldies group called The Drifters before heading out on a solo career.

When Ventura arrived in Branson he began looking for any theatres or shows that were looking for a vocalist, which led him to a theatre in downtown Branson.

“When they discovered that I was an original member of the oldies group called The Drifters and this is my claim to fame at that time. They asked me if I would like to find two guys to do the show I used to do with the group,” said Ventura. “I thought about, ‘Do I want to resurrect the memories and songs of the group?’ It was a good time back then, but I was kind of over it. However, I talked to Kay, my wife, about it and prayed about it. She said, ‘Well, it could pan out to be a good opportunity, because it seems that not everybody that comes to Branson to have their own show, gets to have their own show.’ So, I did it. I did two seasons of the show that I will always consider my flagship show which is Doowop & The Drifters.”

Ventura said after a couple years he knew he wanted to update the show, which had won several awards by then, to include video and more, so he brought the show to the Majestic Theatre.

“I just felt a calling to give to Branson something that we have to go to Springfield and beyond if we want to hear some live jazz or if we want to hear some Stevie Ray Vaughan and rock out type of blues,” said Ventura. “As diverse as Branson has become and we’re still becoming, there needs to be a showplace for everything under the banner of rhythm and blues.”

The spot Ventura leased from the owner of the Majestic was an as-is space, so the Ventura’s went to work to transform the location into The Ruby Room

“There was 30-year-old green carpet with glue that I had to rent a grinder (to remove it). I rented it for two days, just figuring I could get all of the glue and the gunk up off of the floor, but I had to rent it for four days and I’m grinding this stupid floor and just grinding it down,” said Ventura. “We put an epoxy on top of the red only because the name of the place is Kay’s idea for The Ruby Room. So I said, ‘Why don’t we have a ruby floor.’”

“We only got to have six shows, three shows a piece,” said Ventura. “We had the first show a piece and then the town went on lock-down for a whole month. Then the governor had rolled things out in three phase. Now we’re in phase one except the occupancy had to be cut pretty much in half depending on the square footage.”

Ventura said even with the occupancy limits, he was willing to stay open. However, due to the constant quarantine requirements that were effecting the theatre and for safety reasons Ventura said, after only hosting two more shows a piece last year they closed up shop.

“My wife and I, we just said, ‘Hey, for the safety of our performers and for the staff and for all of the craziness that’s going on, we’re going to shut it down.’ I was the first of all of the theatres in town to shut down,” said Ventura. “Now it is a good time for all of us here, because people are starved to get out and to really socialize again and just to have a sense of normalcy. The vaccines are out now and that is boosting the tourist confidence now. The sky is the limit.”

Showtimes are Thursdays and Saturday at 7 p.m. for Dancing in the Streets — A Motown Revue and Wednesdays and Fridays at 7 p.m. for Doowop & The Drifters. During the show The Ruby Room has a menu for audiences to order from that includes appetizers, homemade flatbread pizzas, street tacos, fresh pastries, beer, wine and cocktails.

To purchase tickets online or for additional information on The Ruby Room and the two shows call 417-222-4499 or visit therubyroomatthemajestic.com.