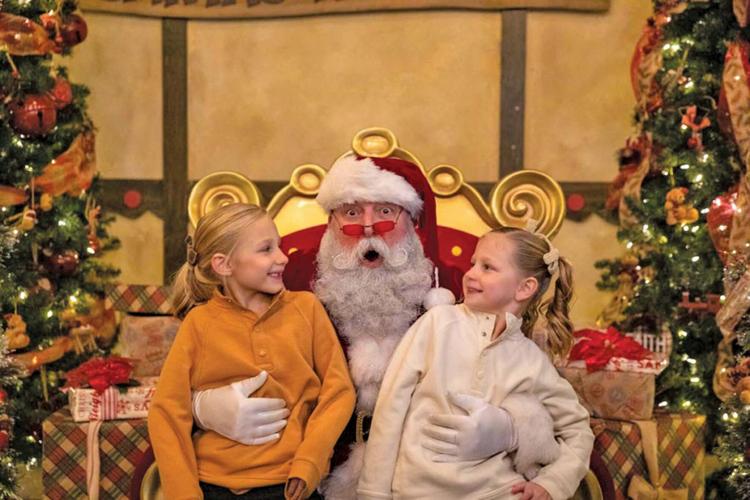 The North Pole Adventure along with other Shepherd of the Hills fun are open again after a Nov. 11 electric fire. 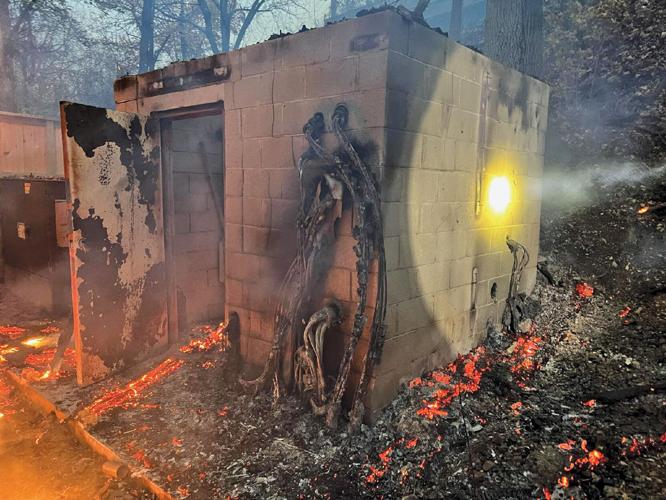 The aftermath of the electric fire at Shepherd of the Hills, which took place in the main electrical supply building.

The North Pole Adventure along with other Shepherd of the Hills fun are open again after a Nov. 11 electric fire.

The aftermath of the electric fire at Shepherd of the Hills, which took place in the main electrical supply building.

Christmas is underway and festivities are back on track at Shepherd of the Hills after an electrical fire left most of the homestead property without power last month.

In the early morning hours of Friday, Nov. 11, the main electrical supply for the family entertainment park and farm caught fire. Shepherd of the Hills General Manager Jeff Johnson shared a gentleman was at the property making a trash pickup when he saw the fire and called 911.

Johnson explained, due to the fire, they lost power to their outdoor theater area, Aunt Mollie’s Mercantile, Sammy Lane’s Sweet N’ Treats, parts of The Trails of Lights, The North Pole Adventure and more.

“We had to kind of scramble to get generators purchased and up and running just to be able to even open The Trail of Lights that night,” Johnson said. “You don’t necessarily know the impact of electrical fires until you trace it all the way back and things aren’t coming on, you’re trying to rework all the power supplies to get power where it needs to go.”

As for the cause of the fire, other than it being electrical in nature Johnson said they really don’t know.

“A lot of the electrical components are old and have been around for a very long time. I wouldn’t even want to speculate in terms of the how, but it was some sort of breaker or transfer switch type thing,” Johnson said. “They aren’t really sure. They didn’t exactly say. At that point it was all so far gone, it was hard to get our head around what was exactly happening.”

As the morning of the fire also coincided with the scheduled opening of The North Pole Adventure for the Christmas season at the park, Johnson said they had no choice but to postpone the opening to the following weekend.

“We had to do some rerouting of a lot of the power on things to even get open the following weekend for that. Since The Trail of Lights is open seven days a week, we really had to dig in to get that open first and dealing with problems throughout,” Johnson said. “This past weekend we had so much weather come through with the rain and it was just causing issues with those generators just as we got open…So we’re excited now to be open and getting everything back up and going. The North Pole Adventure has been open the last couple of weekends without any flaws, so we’re able to function on that side.

Though the power’s not permanently fixed, Johnson said it’s temperately fixed enough that it can run all of what the park is currently operating.

When asked about a completion timeline for a permanent fix for the electric on the property, Johnson said it’s going to take some time before they’re back to 100%.

“To be able to get power back to the outdoor theater, that’s going to take quite a bit of time and it’s going to have to be installing all new electrical components. Because everything that burned, there wasn’t really a building per say of value, it was all the electrical components that brought the power from the White River Electric side onto our property side,” Johnson said. “That unfortunately or fortunately, however you want to look at it, is the only part that burned. Now we’ve got to resupply the power to the outdoor theater. We’ve got to resupply the dressing room, power in our concession stand as well as our mercantile, gift shop and all that stuff…A lot of the components and things with some of the supply chain shortages stuff that has gone on, it’s hard to be able to get some of the stuff we need to get all that fixed permanently.”

Johnson said they wanted to get everything up and running as fast as possible for those folks who have made Shepherd of the Hills one of their Christmas stops each year.

“When you’re a part of people’s Christmas celebrations and their traditions, and we’re lucky enough they make us a part of that, you don’t want to let them down and you’ve got a responsibility to them, but also to our employees and stuff to be able to keep people working and get the things done we need to get done,” Johnson said. “We’re thankful coming out of the weekend we had, it could have been a whole lot worse. We’re very thankful that it wasn’t and we’ve got a lot of good people that helped us and worked through all of it. We’re looking forward to a very good Christmas season and hoping to put a great ending to a great year.”

For folks who have never had the opportunity to come experience their latest Christmas additions at Shepherd, Johnson encouraged them to come by for a visit to check out The North Pole Adventure.

“Basically Santa’s moved The North Pole to Shepherd of the Hills. So air traffic control is Inspiration Tower, Santa’s living there in the cabin and he’s at the toy shop visiting with all the little kids when they come by,” Johnson said. “We’ve got a snow tubing slide and a number of other things. Folks can walk around and look at all the lights. They can do a hayride thru the lights as well. We’ve got an extended hay ride this year and then a number of photo ops for families and they can see all the little elves that are all over the property.”

The North Pole Adventure runs on select days now through Saturday, Dec. 31. The Trail Lights, which has been running at the park for more than three decades now, will remain open daily now through Sunday, Jan. 1.

For additional information on Christmas at Shepherd of the Hills, operating hours or to make ticket reservations visit theshepherdofthehills.com.