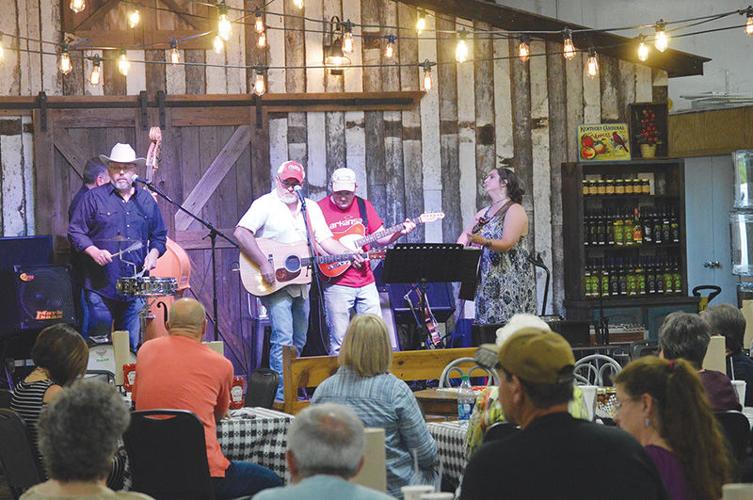 The Honkytonk Renovators jam out last weekend at the Pickin’ Porch Grill, located inside the Branson Craft Mall. 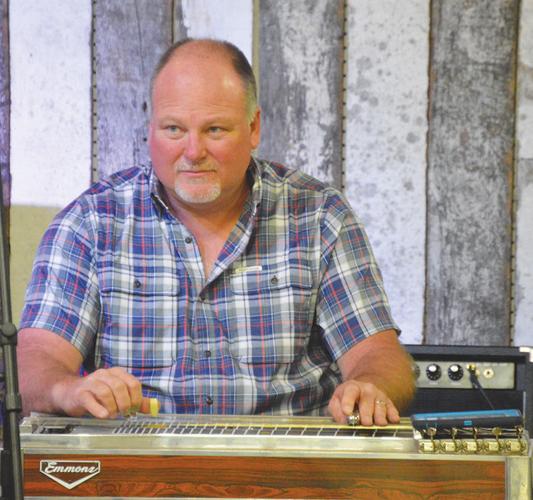 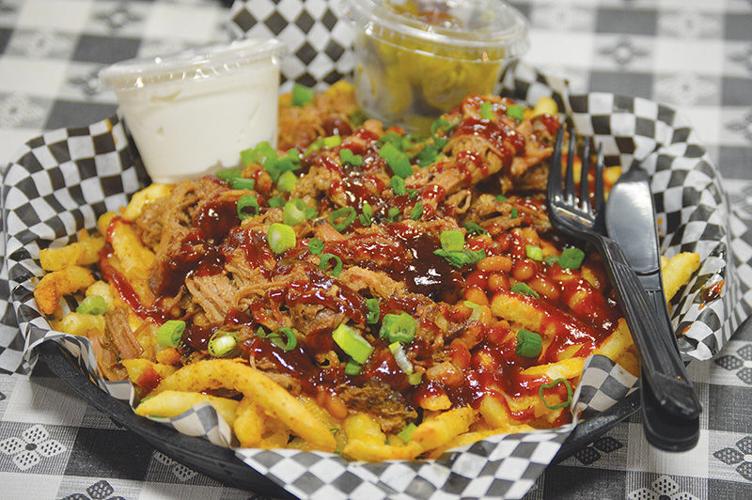 The pulled pork fries is one of many items offered at the Pickin’ Porch Grill inside the Branson Craft Mall. 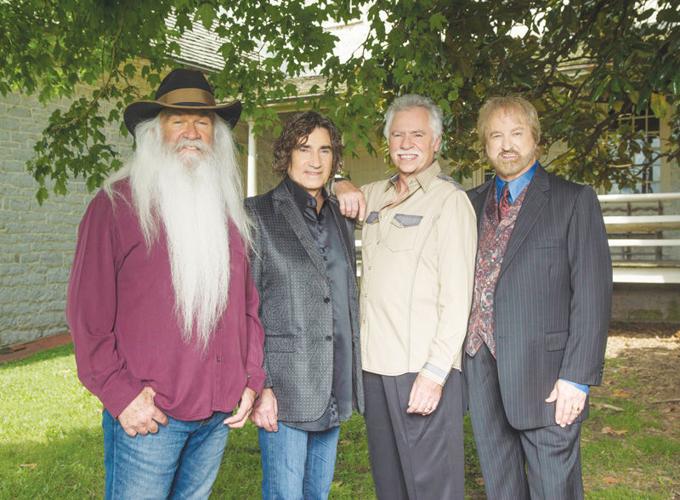 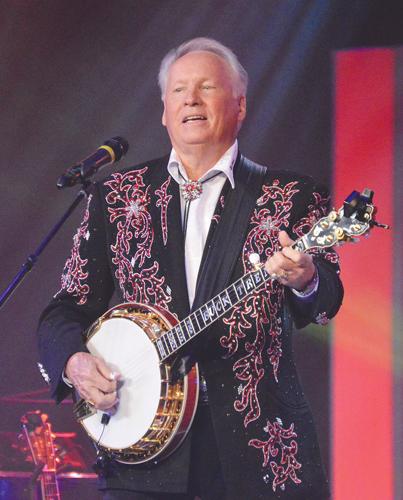 The Honkytonk Renovators jam out last weekend at the Pickin’ Porch Grill, located inside the Branson Craft Mall.

The pulled pork fries is one of many items offered at the Pickin’ Porch Grill inside the Branson Craft Mall.

One of the best parts of my job is getting to go out and experience something new, or new to me, and then sharing the awesomeness with my Loyal Reader(s). Saturday afternoon I cruised to the Branson Craft Mall, located on Missouri 165 across from the newly named Branson Famous Theatre, to visit owner and local musician Mark Pearman, who invited me to come check out the Pickin’ Porch Grill, which is nestled in the back of the mall.

Upon entering the mall, I could hear the music coming from the back, but my path back that way took longer than I had anticipated, as I found myself captivated and constantly slowed by stopping to check out everything the mall had to offer. After navigating what I called a “maze of coolness,” which included a boatload of handmade products, unique shirts, hats, artwork, a large selection of Hillbilly Nut & Fruit, the Branson Fudge Company, the Branson Coffee Company and local Jams and Jellies by Grannies Favorites, I made my way to the Pickin’ Porch.

While the sweet sounds of Saturday’s featured entertainment, the Honkytonk Renovators, most assuredly caught my ear, it was the ridiculously intoxicating smell coming from the grill that had me floating on air, blindly following my nose, just like you see in the old cartoons.

The menu features appetizers, specialty sandwiches, burgers, salads, platters and plates with everything from catfish or carne asada tacos to a fried green tomato BLT. Had I known how good the food was, I sure as heck wouldn’t have waited as long as I did to check it out.

Despite Pearman’s best efforts to stuff me with a little bit of everything they had to offer, I settled on the fried catfish po-boy and an order of pulled pork fries.

As a south Mississippi boy who grew up with a catfish pond in the front yard, I know a thing or two about catfish, and this was some of the best I’ve ever had. Good flavor, perfectly battered and fried, and not “fishy.” As awesome as the catfish was, it was the pulled pork fries did me in. The dish included a huge portion of fries topped with melted jack/cheddar cheese, pulled pork, baked beans, jalapeños, green onions, sour cream and barbecue sauce.

Seriously, one of the best things I’ve ever eaten in the 417 area code. No matter how full I got, I simply couldn’t stop eating them.

Shoot, I even turned down a free sample of fudge to eat more pulled pork fries.

In addition to the restaurant, the entire Pickin’ Porch area includes a laid back atmosphere with plenty of seating, and a stage featuring a revolving lineup of local entertainment. In fact, the sound system fits the venue perfectly. The music is loud enough to jam out, yet soft enough to be able to carry on a conversation without yelling.

According to Pearrman, a band called Clueless performs from 10 a.m. until 1 p.m. Tuesday through Friday, and every Saturday, the Pickin’ Porch will feature a different act. In fact, this Saturday will feature local favorite Josh Cherry, followed by Adam Webster April 29, the return of the Honkytonk Renovators May 6, Sheila, mark and Kathy May 13, and Casey and the Atta Boys May 20. Saturday music runs from 5 p.m. until 7 p.m.

“We wanted to schedule times for folks to come out and enjoy music without interfering with shows,” Pearman said. “We’re done at 7 p.m. so folks can go see shows, and we encourage them to do so.”

The Branson Craft Mall and the Pickin’ Porch Grill are a perfect fit, and anyone who likes a unique shopping experience, good live music and food so good you may have to slap somebody, should make plans to stop by and see Mark Pearman and his family.

For more information, visit bransoncraftmall.com, and for a full list of upcoming entertainment, visit facebook.com/pickinporchgrill.

A week that has already seen the debut of two new shows, the “Ozark Bluegrass Jubilee” at the God and Country Theatre and “The Janice Martin Cirque Show — A Magical, Musical & Aerial Extravaganza” at the Americana Theatre, as well as the return of the Texas Tenors at the Starlite Theatre, has a lot more in store for us, featuring hitmakers, hall of famers and local favorites all returning to the stage this week.

Wednesday and Thursday will see one of my favorite performers hit town as country music hitmaker Gene Watson takes the stage for two shows at the Starlite Theatre as part of the BootDaddy Concert series.

Watson got into the business in the early 1970s, performing in local clubs at night while working in a Houston auto body shop during the day. He recorded a few tracks for regional record labels, but in 1974, Capitol Records picked up his album entitled “Love in the Hot Afternoon” and released it nationally.

The title track was released in June 1975 and it quickly reached No. 3 on the Billboard chart. Throughout the next 15 years, Watson was a staple on the Top 20 charts. In all, he released six No. 1s, 22 Top 10s and 50 charted singles.

Watson has been touring ever since his breakthrough more than 40 years ago, performing some of his biggest hits like “Where Love Begins,” “Paper Rosie,” “Should I Go Home (or Should I Go Crazy),” “Nothing Sure Looked Good on You,” “14 Karat Mind,” “You’re Out Doing What I’m Here Doing Without,” and “Farewell Party,” which quickly became his signature song.

Trent had been performing for more than a decade when he hooked up with Porter Wagoner. During his time with Wagoner, Trent played alongside Norma Jean Beasler, also known as “Pretty Miss Norma Jean,” Jeannie Seely and Dolly Parton.

He’s been in Branson hosting his own show since 1991. I had lunch with Buck and his lovely bride last week, and he’s all excited about this year’s show. Buck’s passion and fun is contagious, and I’ve never not had a great time at his show.

Thursday night will see the return of Shoji Tabuchi and the rest of the family in “The Shoji Tabuchi Show,” set for a 7:30 start time.

Tabuchi and family have been a staple of the Branson entertainment scene for three decades, and been synonymous with elegance, beauty and production. Since moving into his own theater in 1990, Shoji Tabuchi has consistently remained one of the top draws in the live show capital of the world and was instrumental in the “Branson Boom” of the early 1990s.

This show is always stellar, with epic production and always a fair share of surprises.

Visit shoji.com for more information and a full schedule of shows.

Also set for Thursday night is an air show and concert featuring country music star Hank Williams Jr. at the Bass Pro Shops Outdoor Academy’s outdoor amphitheater. As my Loyal Reader(s) know, I’m a massive Hank Jr. fan, and I’ve been looking forward to this one for months.

Over the past 50 years, the man known as Hank Jr. has amassed 70 million in album sales worldwide, including six platinum, 20 gold, and 13 No. 1 albums that spawned 10 No. 1 singles and countless Top 40 and album cut classics. In addition to his chart success, Hank Jr. also captured the ACM Entertainer of the Year, CMA Entertainer of the Year and BMI Icon award.

Country Music Hall of Fame group and Branson mainstays the Oak Ridge Boys will return April 21 and 22 for two shows at the Mansion Theatre.

They began as a vocal harmony quartet specializing in traditional country and gospel during World War II and evolved with the times to help popularize and modernize Country music. Duane Allen, Joe Bonsall, William Lee Golden, and Richard Sterban took control in the late 1960s, and became superstars with the release of the 1977 album “Y’all Come Back Saloon.”

Showtime is 8 p.m. Friday and Saturday. Visit themansiontheatre.com for more.