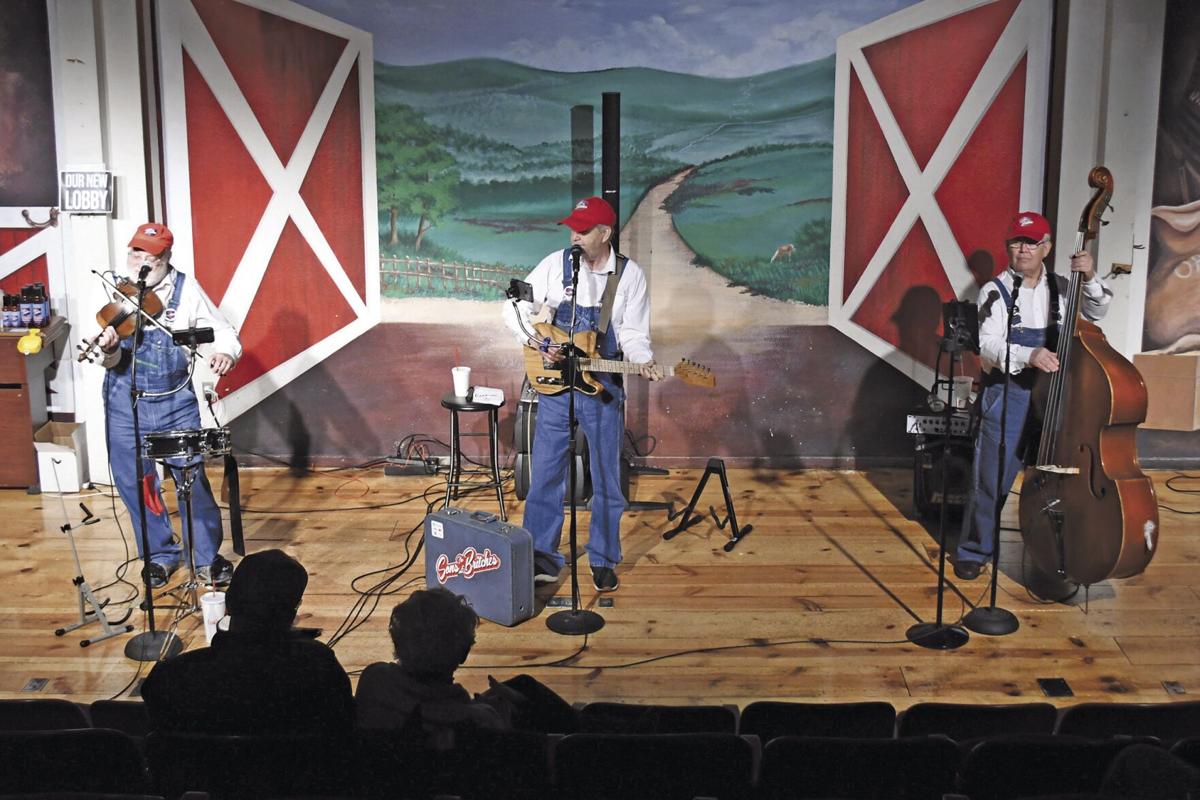 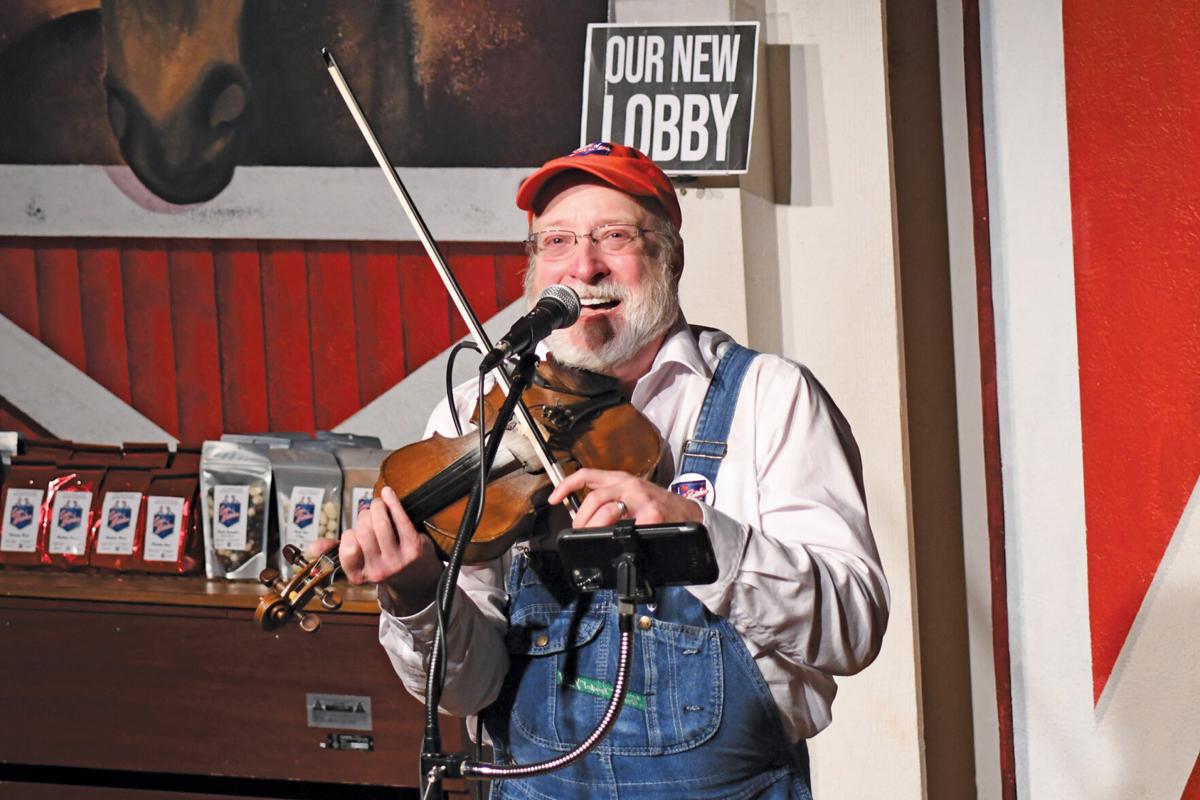 Sons of Britches Entertainer Louis Darby plays a number of instruments, including the fiddle, during the show. 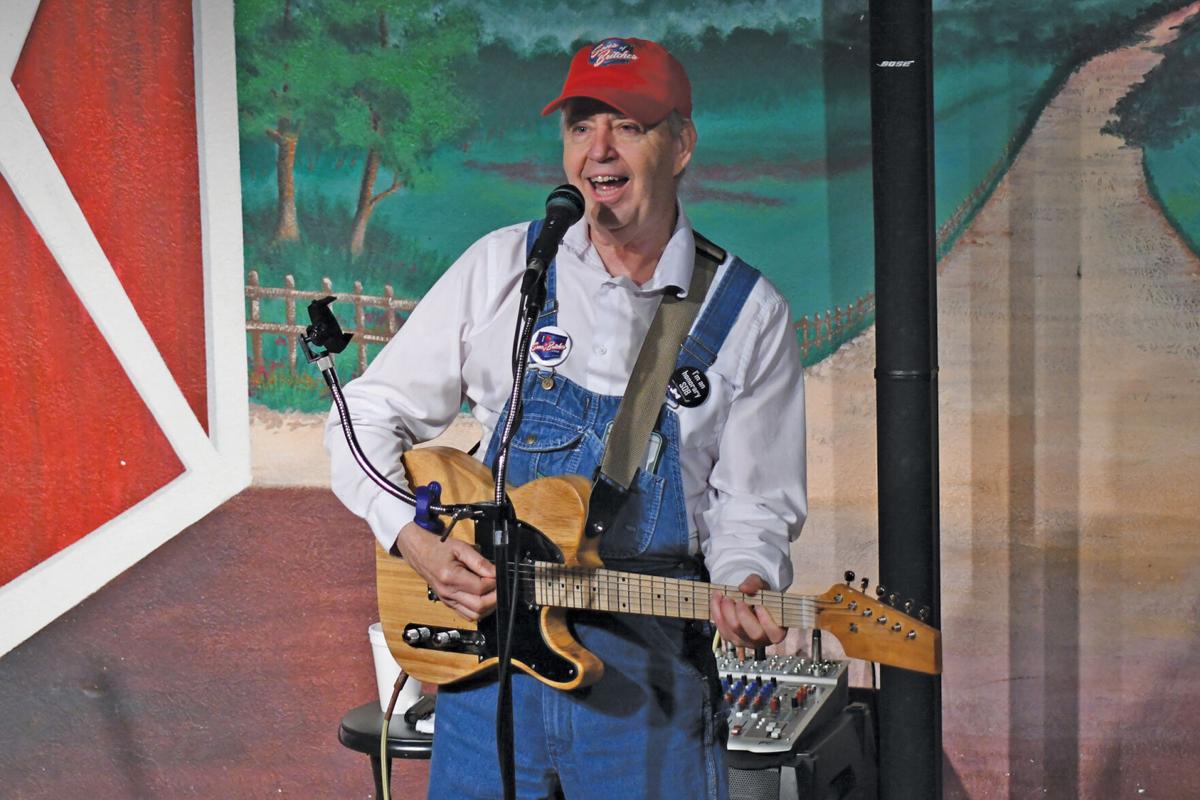 Entertainer Earl Vaughan plays the guitar and takes the lead on a request of Johnny Cash’s “Ring of Fire.” 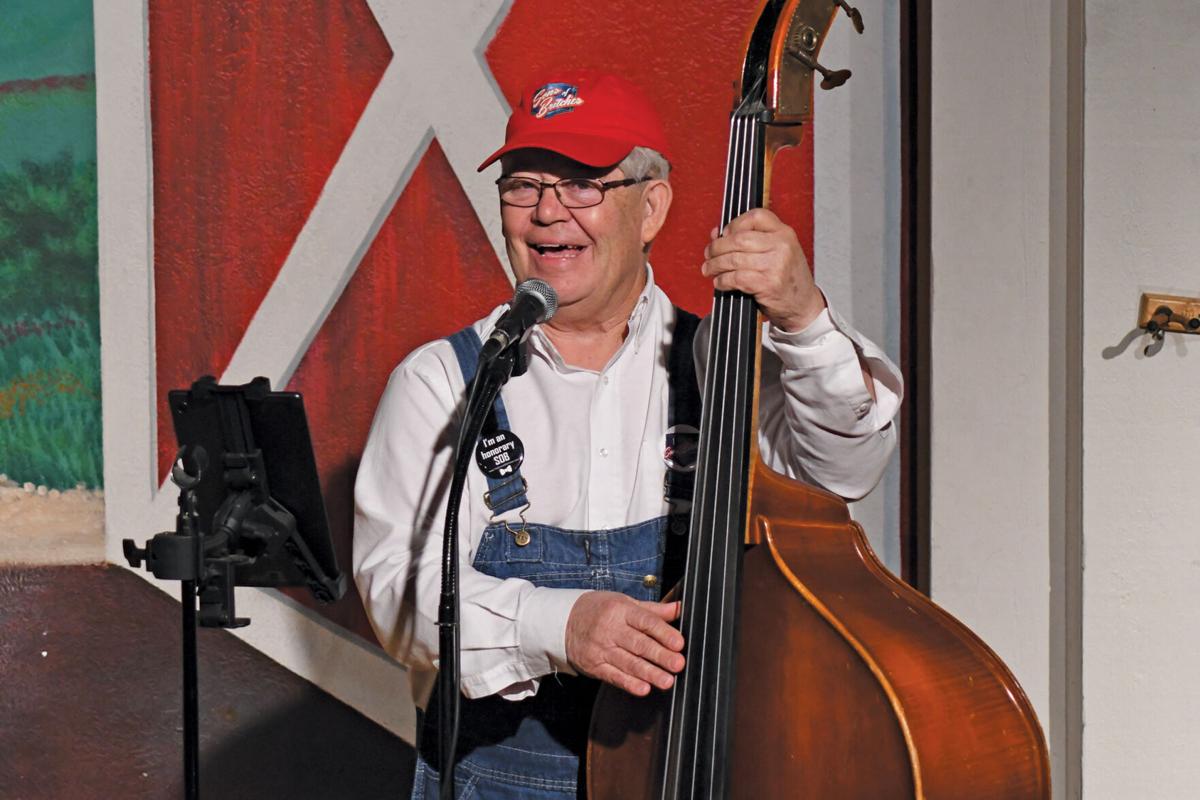 David Edwards is the newest member of The Sons of Britches. Edwards plays the bass and is a retired teacher. 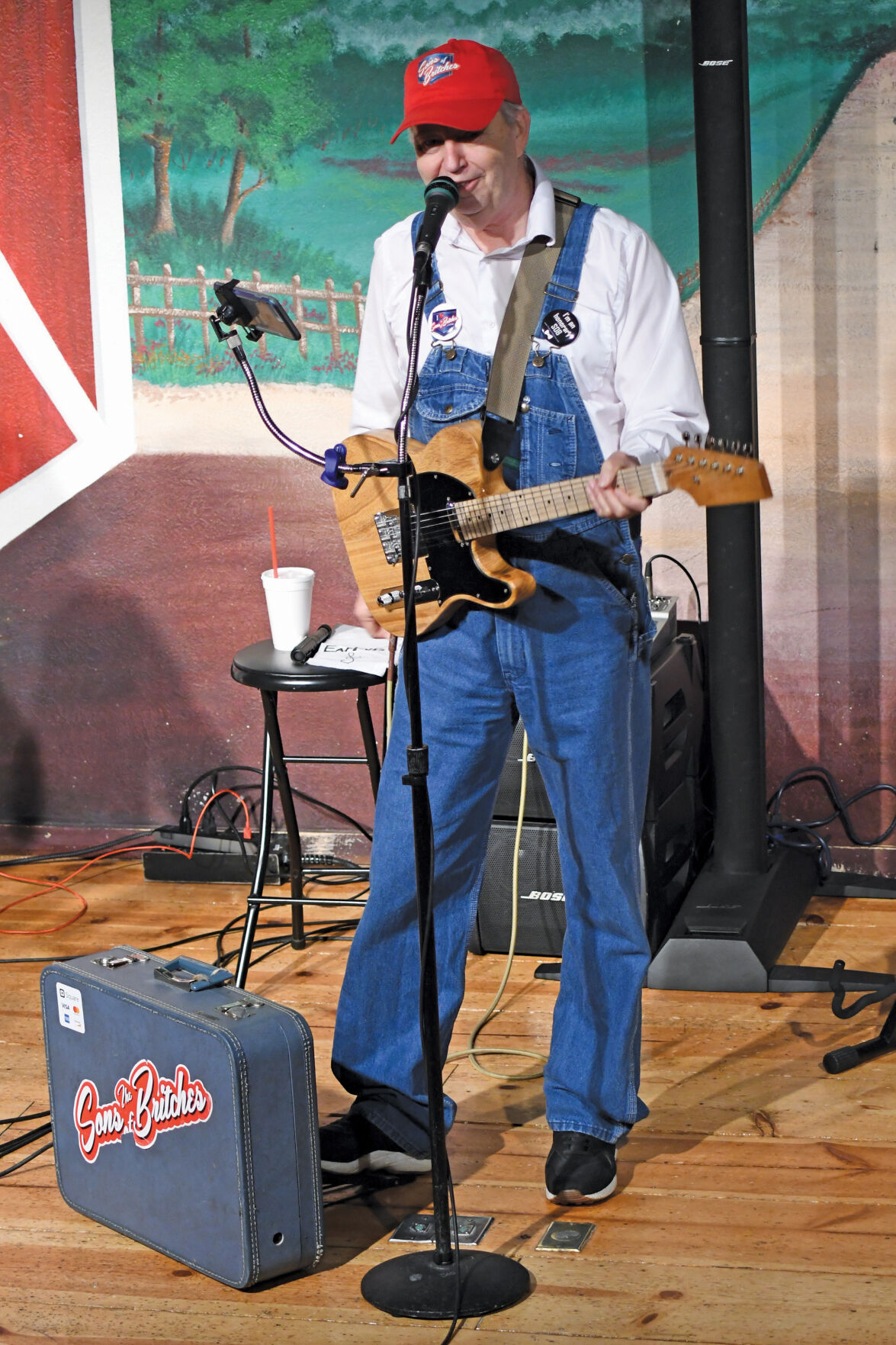 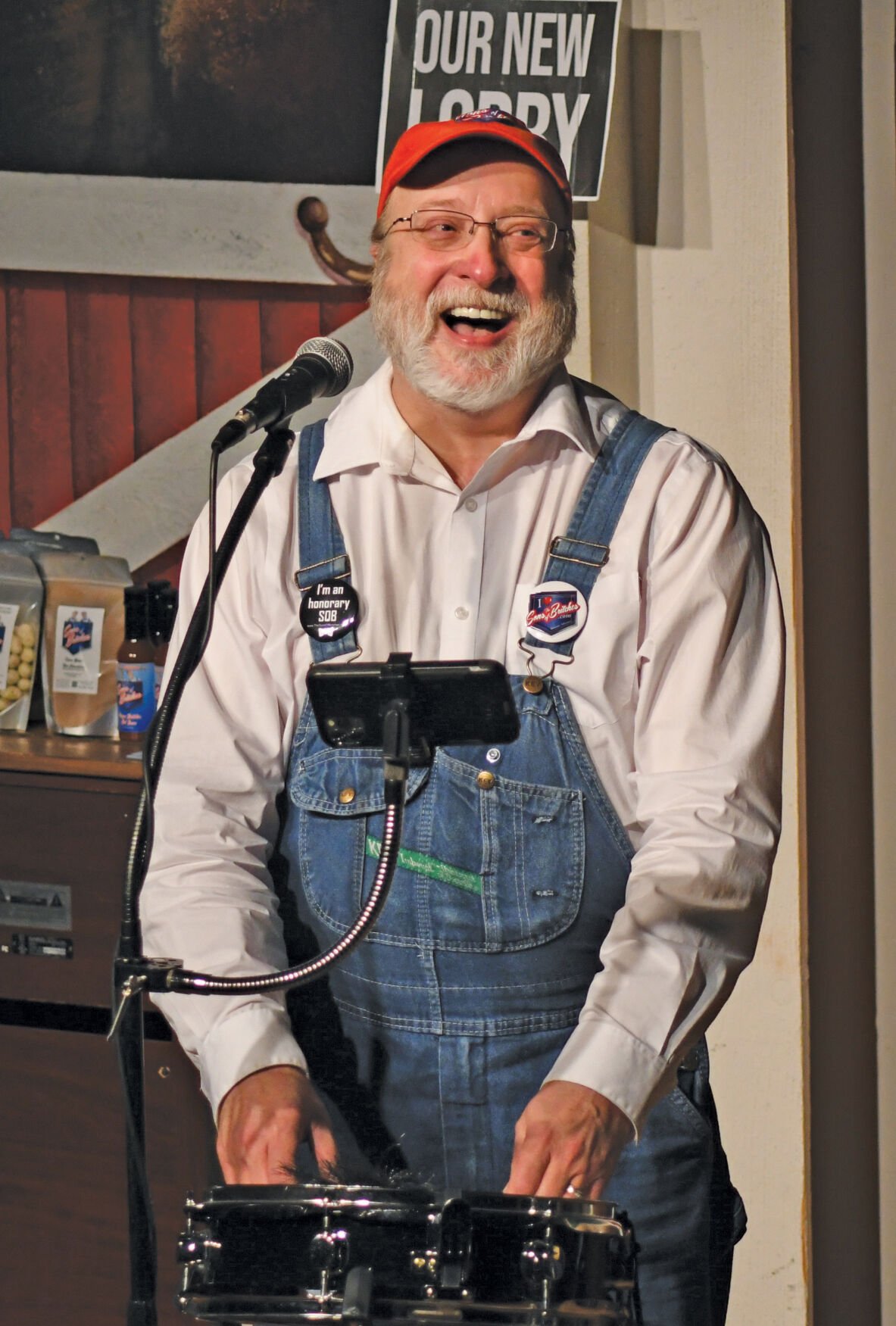 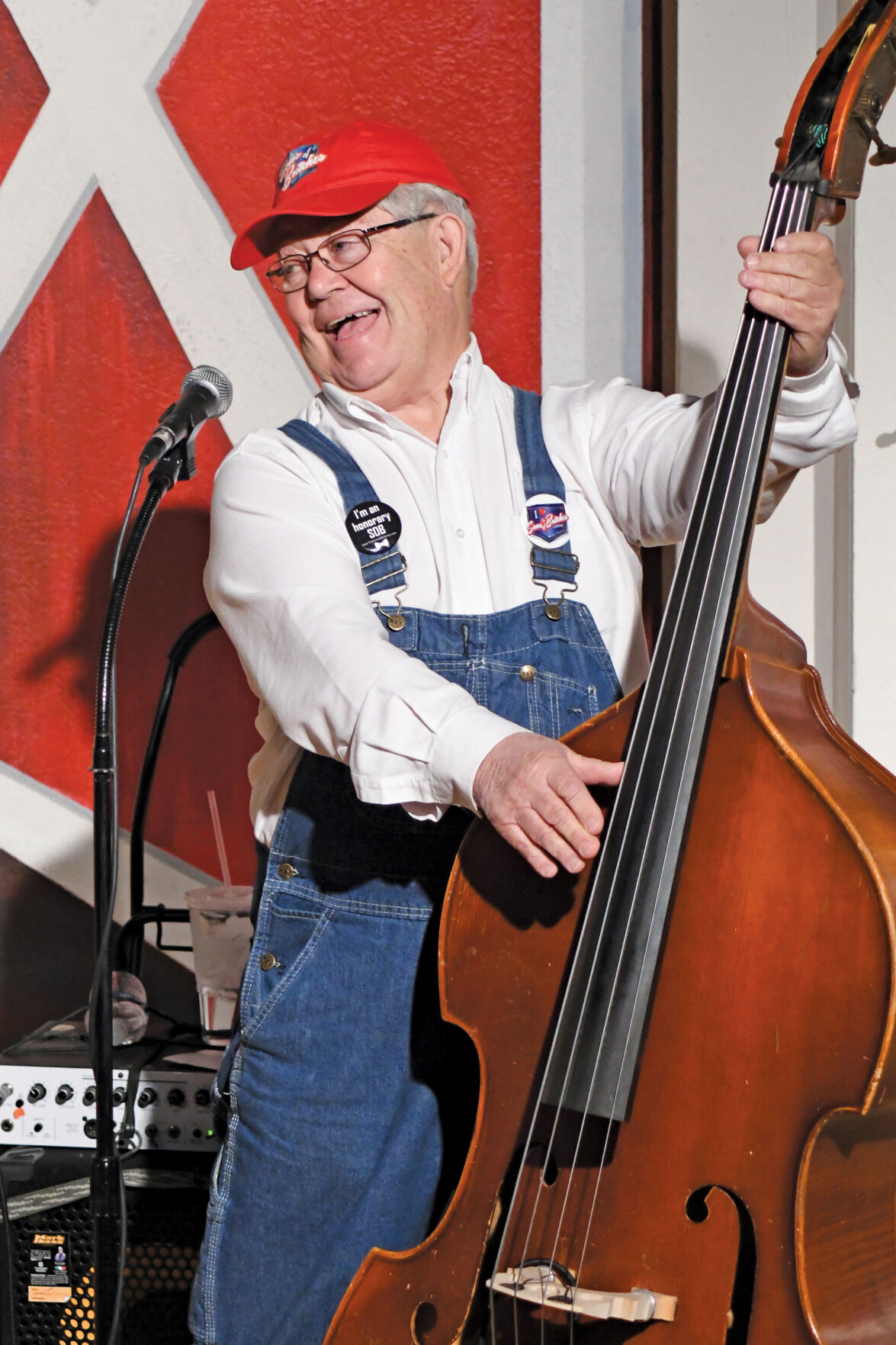 Sons of Britches Entertainer Louis Darby plays a number of instruments, including the fiddle, during the show.

Entertainer Earl Vaughan plays the guitar and takes the lead on a request of Johnny Cash’s “Ring of Fire.”

David Edwards is the newest member of The Sons of Britches. Edwards plays the bass and is a retired teacher.

The Sons of Britches are celebrating their ninth year of performing in Branson this season with the induction of a new bassist into the group.

Back in February, The Sons of Britches Entertainers Earl Vaughan and Louis Darby announced their longtime SOB bassist and friend Randy Plummer would be leaving their Little Opry Theatre show.

Darby explained Plummer’s decision to leave the show came after all three of the SOB’s came down with COVID-19 towards the end 2020.

“We were pretty bad sick. Randy seemed to get the brunt of it,” said Darby. “One night, in the middle of the night — because me and Randy are kind of night birds — he text me and he said, ‘Hey listen. I just want to let you know that I’ve got too much on my plate, so I’m needing to cut back a little bit, and I won’t be with The Sons of Britches this year.’”

Darby added, “We wish him the very best. He’s a good man. He’s got a good heart. He’s just kind, very kind person. So we’re very blessed that we had him while we did.”

To fill the rather large shoes left behind by Plummer, the SOB’s turned to the talents of David Edwards, who had filled in a few times as bassist during the 2020 season.

“The first time we used Dave was a time when Randy was under the weather and at the last minute had to not go on a road trip with us, and we were in a panic,” Darby said. “So we called this guy. Earl knew him and said, ‘I’m going to call Dave Edwards.’”

Edwards joined the SOB’s for their road gig and then continued to fill in when needed in 2020. Edwards, who is a retired school teacher and band director of 40 years, said playing with the SOB’s was actually an item on his bucket list.

“I saw them one time and went, ‘Oh my goodness. That’s exactly the show I need to play for someday. They’re on my list. Someday I’m going to get to play with these guys,’” said Edwards. “I’m just so excited about getting to do it.”

Other than the first couple of songs to help kick off the show, which are selected by Vaughan and unknown to the other SOB’s, the entire show is made up of song requests from the audience.

“Requests. That’s it,” said Vaughan. “We build the show around the audience, instead of the audience coming to see what we built. We’re not playing for us; we’re playing for them.”

The SOB’s transformed a two-hour show into 90 minutes by eliminating the intermission. Musical influences during the show include - but are not limited to - country, cajan, zydeco, bluegrass and old-time rock and roll.

“The show is so entertaining. Even when we just take requests, that even if we just completely bomb it, these guys are so entertaining with whatever they do, nobody cares, because they’re just having so much fun,” said Edwards. “Even if it just bombs, they’re having a good time with this show, because they are so good as entertainers. They are just so good at singing right along. If they mess up, we just start laughing about it.”

At the SOB’s show, guests will be treated to a family friendly show, full of improv comedy, fun and live authentic music for all ages. At an SOB performance, there are no music tracks and there is no scripted comedy bits. Vaughan said he always likes to start the beginning of each show with a special disclaimer.

“If we don’t know the song you want, but we know who the artist is and we know a song by that artist, we’ll cover it. If we don’t know either one of those things, we’re just going to make something up, and that’s what they’re going to record in a couple of years,” Vaughan said with a chuckle. “Every once in a while somebody will come in and yell ‘Freebird,’ so I’ll do a verse from the chorus of ‘Freebird’ and when I finish that, the key I do it in is very conducive to changing over to ‘Sweet Home Alabama’ and they just go nuts.”

As the newest member of the group, Edwards said becoming an SOB has definitely challenged him mentally and musically.

“I played gospel music for 23 years,” said Edwards. “I’m so used to playing everything perfect, perfect, perfect, and it would just bug me so bad if I messed up. They finally said, ‘If you mess up, just have fun. Go with it. Just laugh and keep going.’ So I’ve learned just to keep going and have fun with it.”

Edwards added that he also gets tickled watching folks who have never experienced a requested-songs-only show.

“We start playing, or especially whenever we start doing songs from the list,” said Edwards. “They’re going, ‘What is this about?’ Then all the sudden it dawns on them, ‘Oh! Now I get it.’”

Darby added, “You see the light go on. You do. From up here, we see it. We see them flip on and they go, ‘Oh my gosh. What are they doing?’ It just blows their mind. You can see it.”

On top of their success as being one of the top rated Branson shows on TripAdvisor, the SOB’s have found a new group of followers on TikTok. As of press time, the SOB’s have garnered more than 103,000 followers since joining the short-form video sharing app in November 2020.

“My kids have been watching it, so I started watching it. I came into Earl one day and I said, ‘Earl, we need to be on TikTok,’” Darby said. “We’re doing things on TikTok that have my kids incredibly embarrassed. They love it though. They’re wondering how in the world are you doing this.”

Darby added that their new digital success has been possible thanks to Stephanie Richardson and her daughter Zoey, who have put in the hard work to assist them.

“They’re having me do things I never thought I’d be doing,” Edwards said. “My grandkids go, ‘Papa you’re crazy.’”

The Sons of Britches have been offering their show at the Little Opry Theatre since May 2014, but have been performing together since 2013.

Vaughan and Darby met each other 35 years ago at Silver Dollar City when they were both hired to clean up following a mudslide in Marvel Cave.

“I was working. (Louis) spent a lot of time just going in and out of the cave and he would bring his lunch,” Vaughan said with a laugh. “So I tell people at the shows, when Louis says, ‘Yeah, we met at Marvel Cave’ and I always say, ‘Yeah, I found him in a block of ice down there, and I chipped him out. I called him Ozarko Man.’”

While they met more than three decades ago, it wasn’t until much later that the pair came together to form The Sons of Britches. Vaughan played guitar for The Baldknobbers for almost 21 years and also spent some time with his wife on the island of St. Thomas, while Darby was in the group the Cajun Connection at SDC and played Fiddlin’ Jake in the Shepherd of the Hills Outdoor Drama for 20-plus years.

The duo reunited when they both found themselves working for the old Circle B show.

“I played a little music on the island,” said Vaughan. “Then when I came back I got on staff at the Presbyterian Church, and I thought, ‘I need to see what’s going on in the music business.’ So I went over to the Circle B. I ran sound and lights for a while and finally got on stage.”

While all the SOB’s have had long and full careers, all three of them agree they have no plans on quitting anytime soon.

“There’s still a lot of music left in these instruments that we need to get out,” said Darby.

“Just getting ready to get ready,” said Vaughan. “That’s my favorite statement.”

Show times for The Sons of Britches are 8 p.m. on Sundays and Mondays, 5 p.m. on Wednesdays and 2:30 p.m. on Fridays and Saturdays. Performances are held on stage at the Little Opry Theatre, which is located inside the Branson Imax Entertainment Complex.