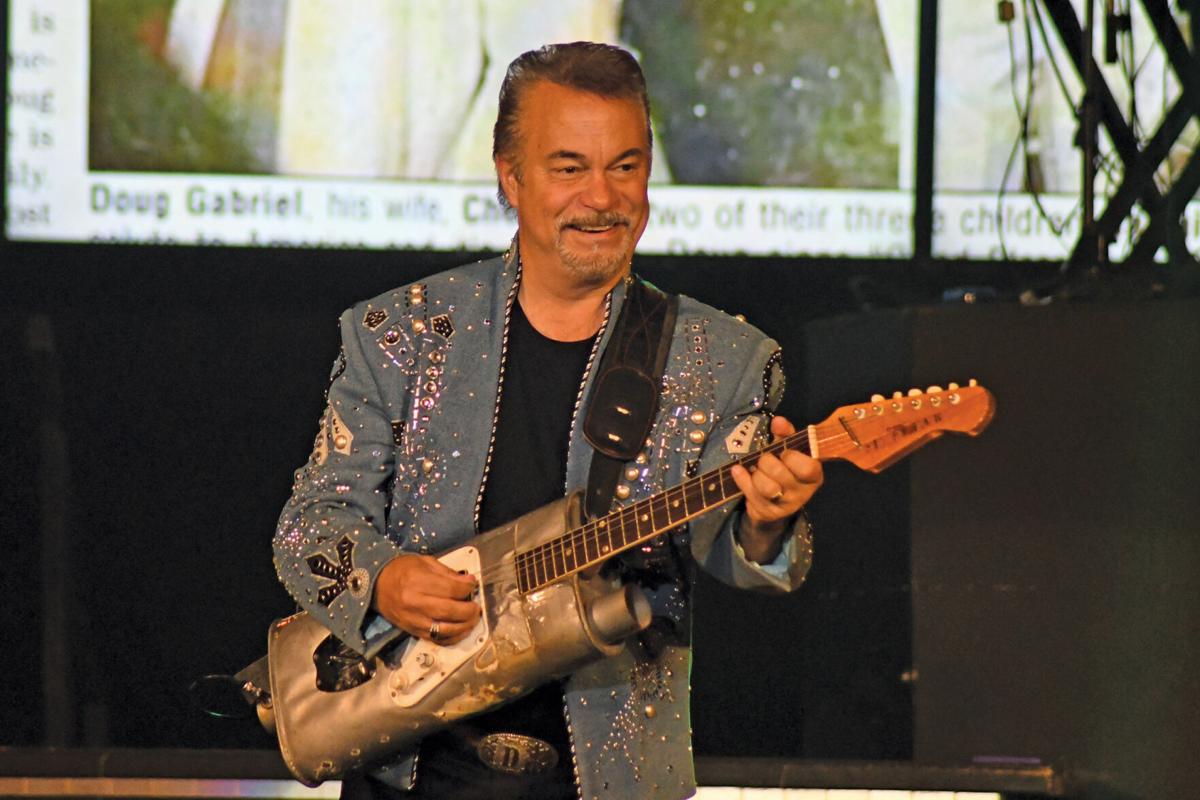 Branson’s most awarded vocalist and one of the longest running entertainers in town Doug Gabriel invites folks to check out their 2021 show and see some of the updates. 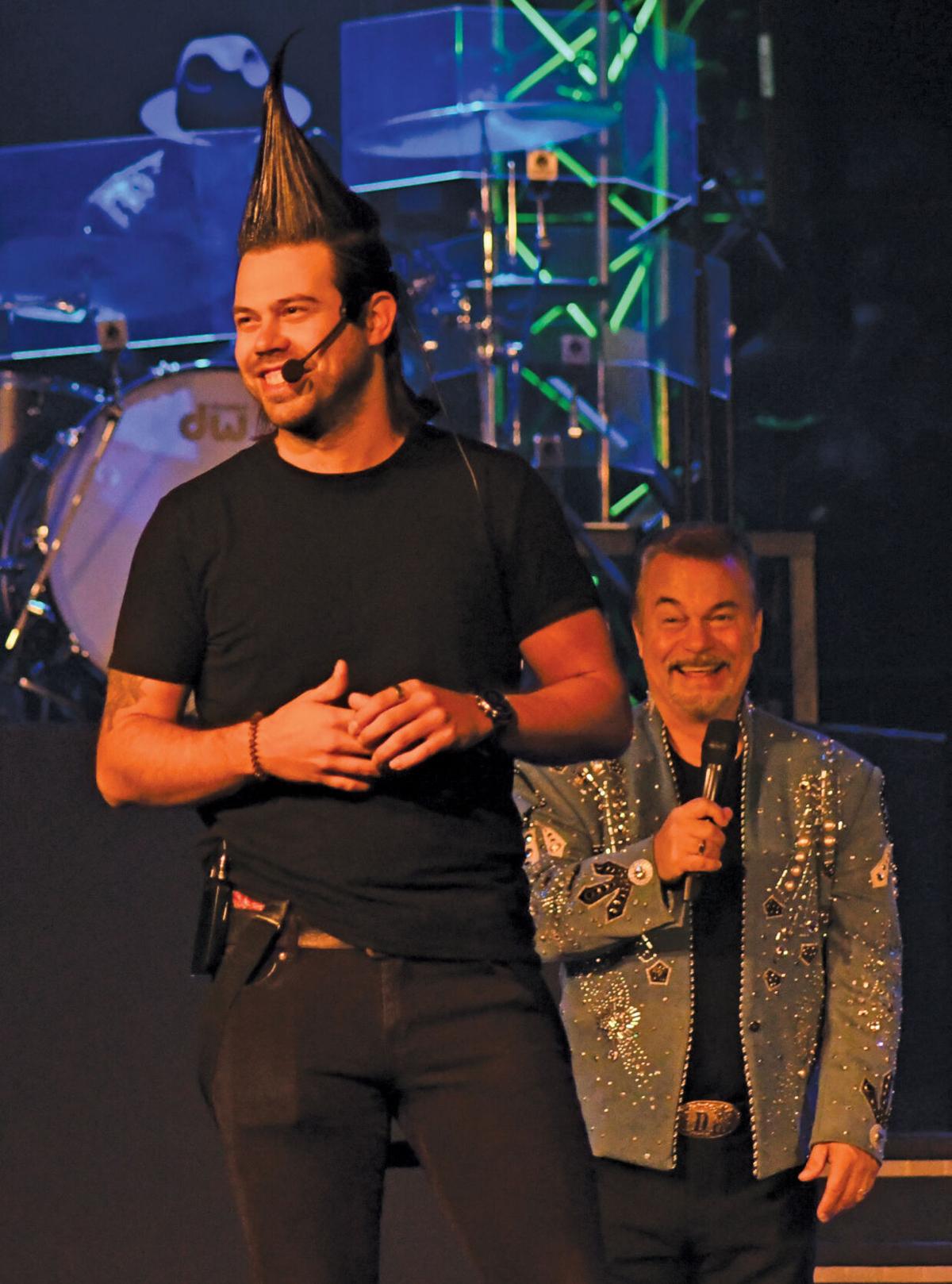 Jordan Gabriel, the comedian for the show, joins his dad on stage to share some of his humor with the audience. 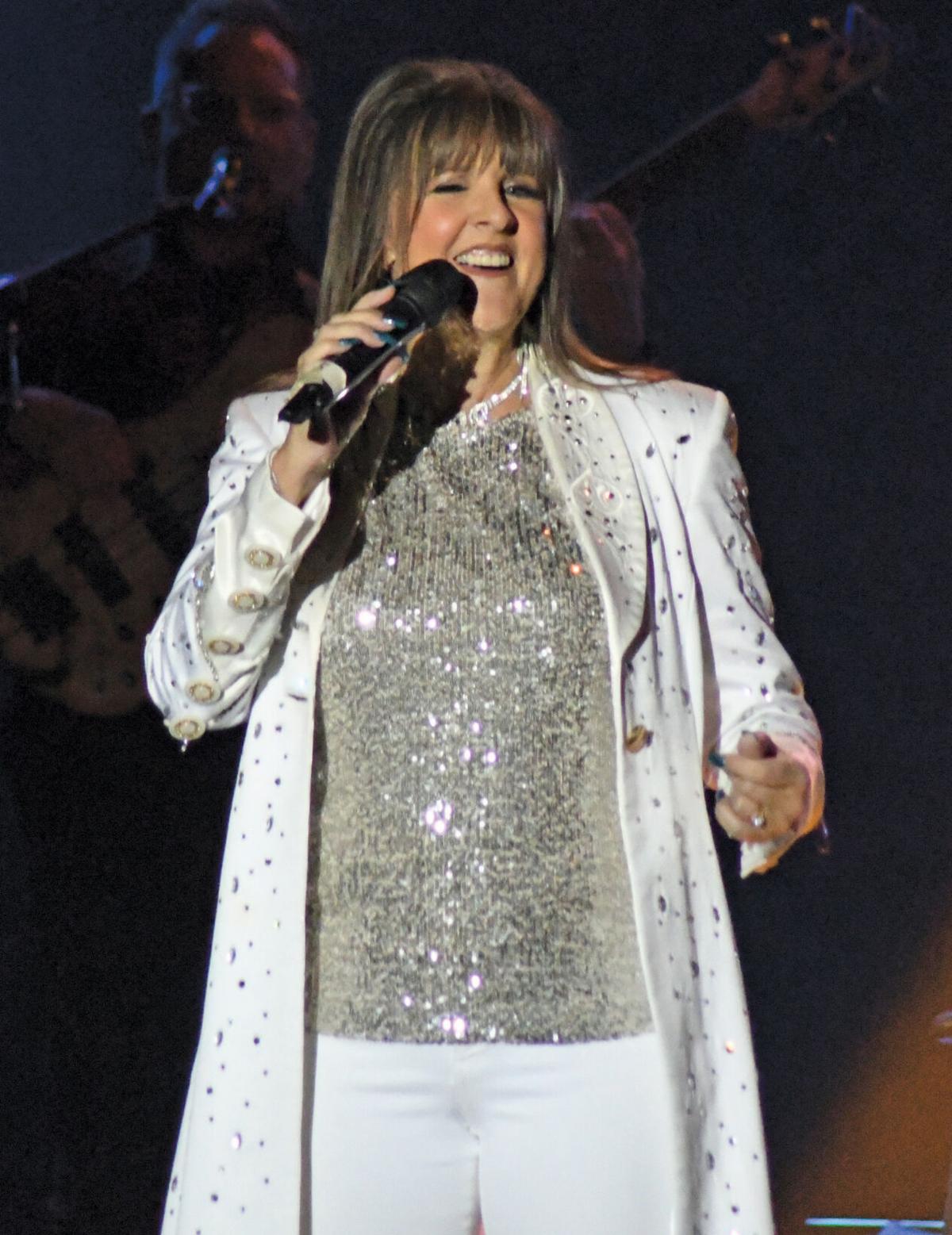 Cheryl Gabriel welcomes folks to the show with her opening number at the beginning of the show. 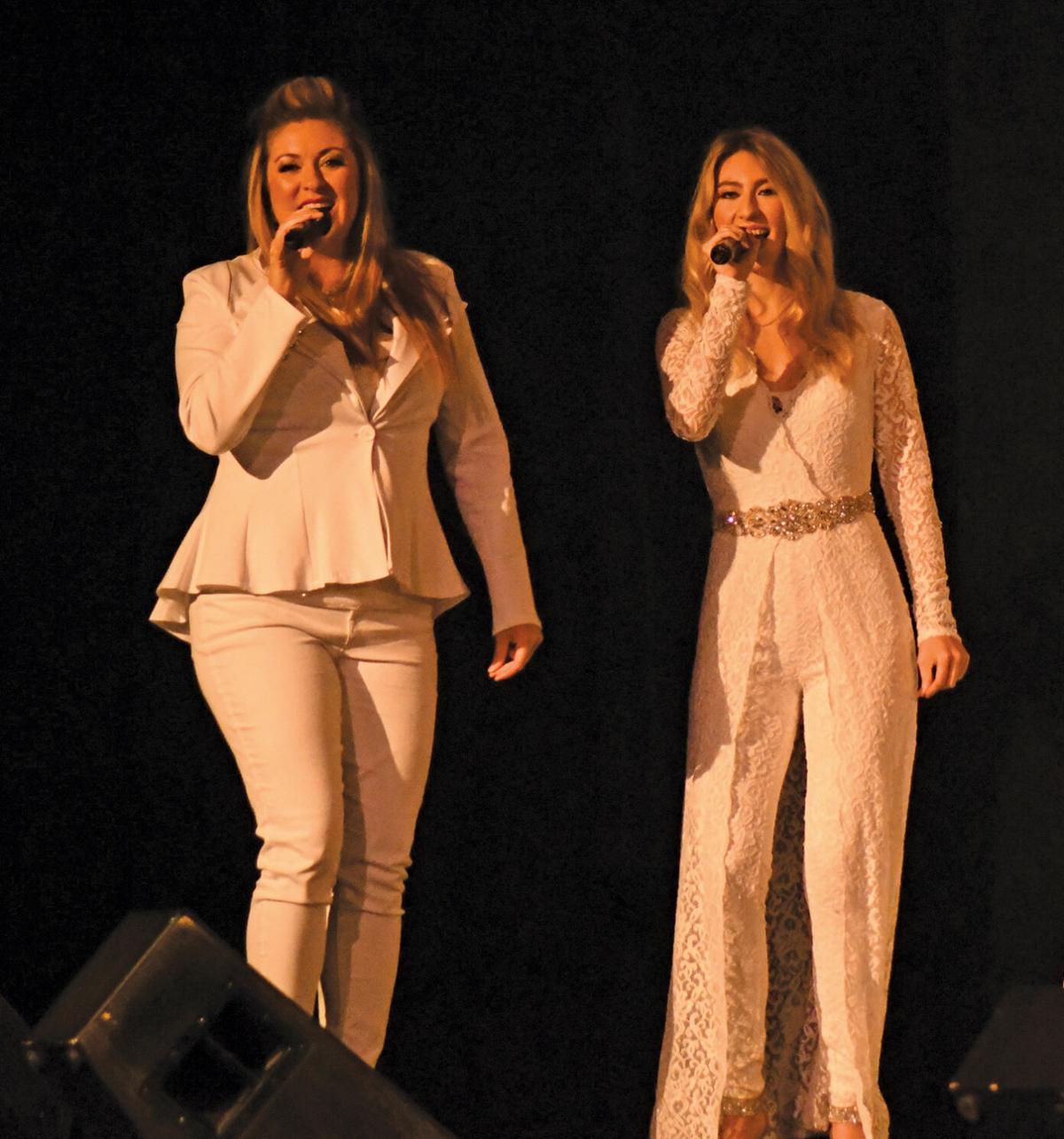 Stephanie Haygood and Jasmine Gabriel provide backup vocals to Doug during a song set in the show. 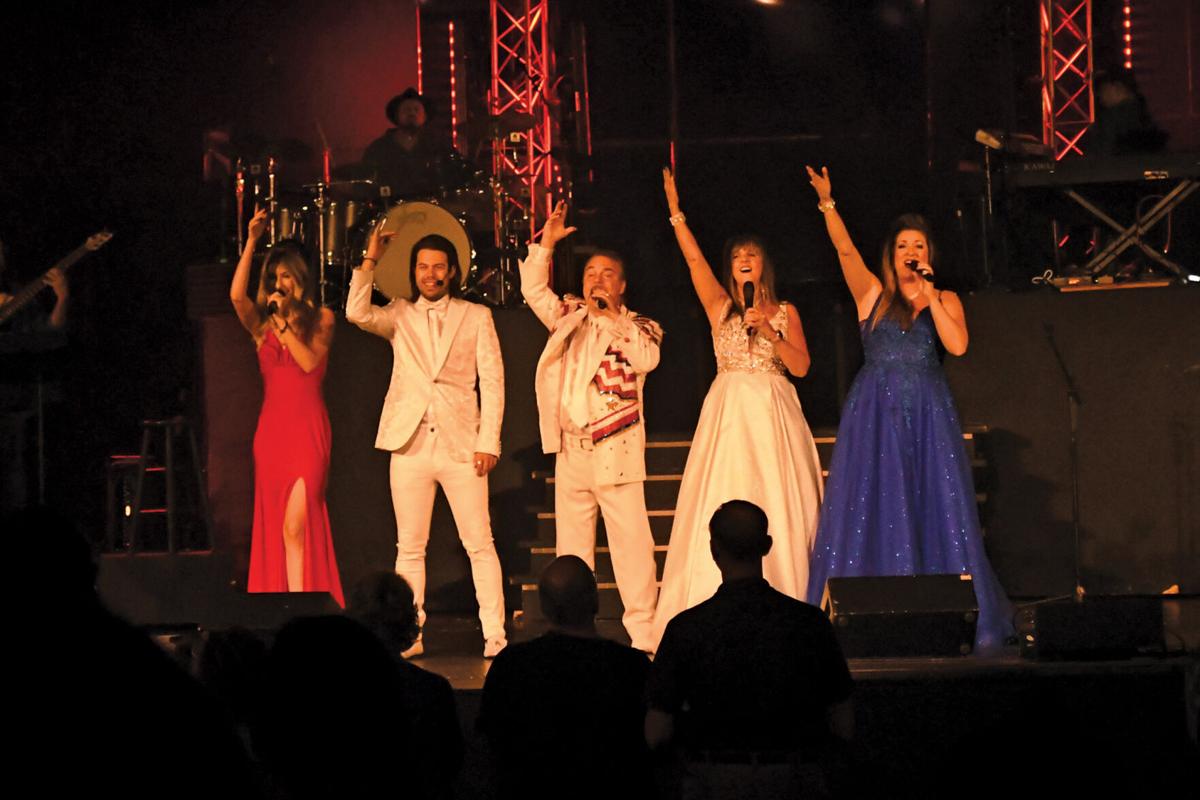 The cast of the Doug Gabriel show performs a patriotic section of songs as part of the shows finale. 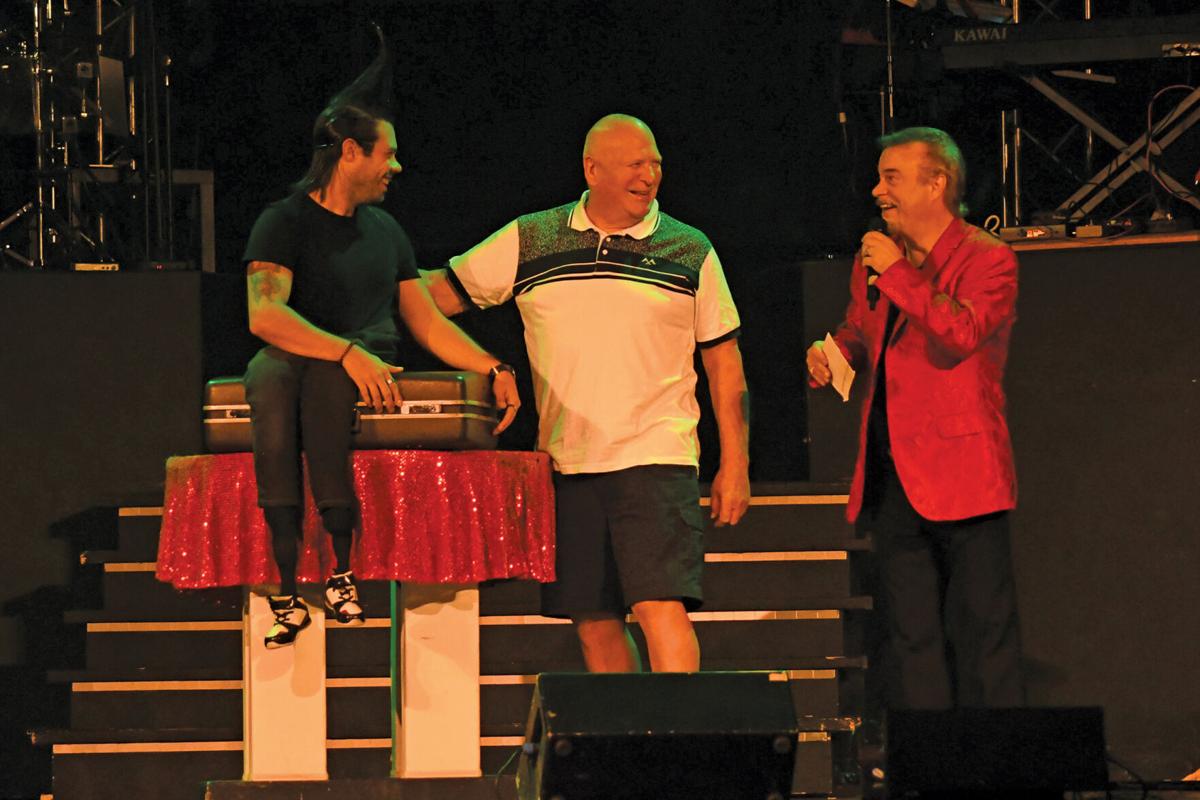 During the show, Doug and Jordan Gabriel do a comedy act with the assistance of a member of the audience. 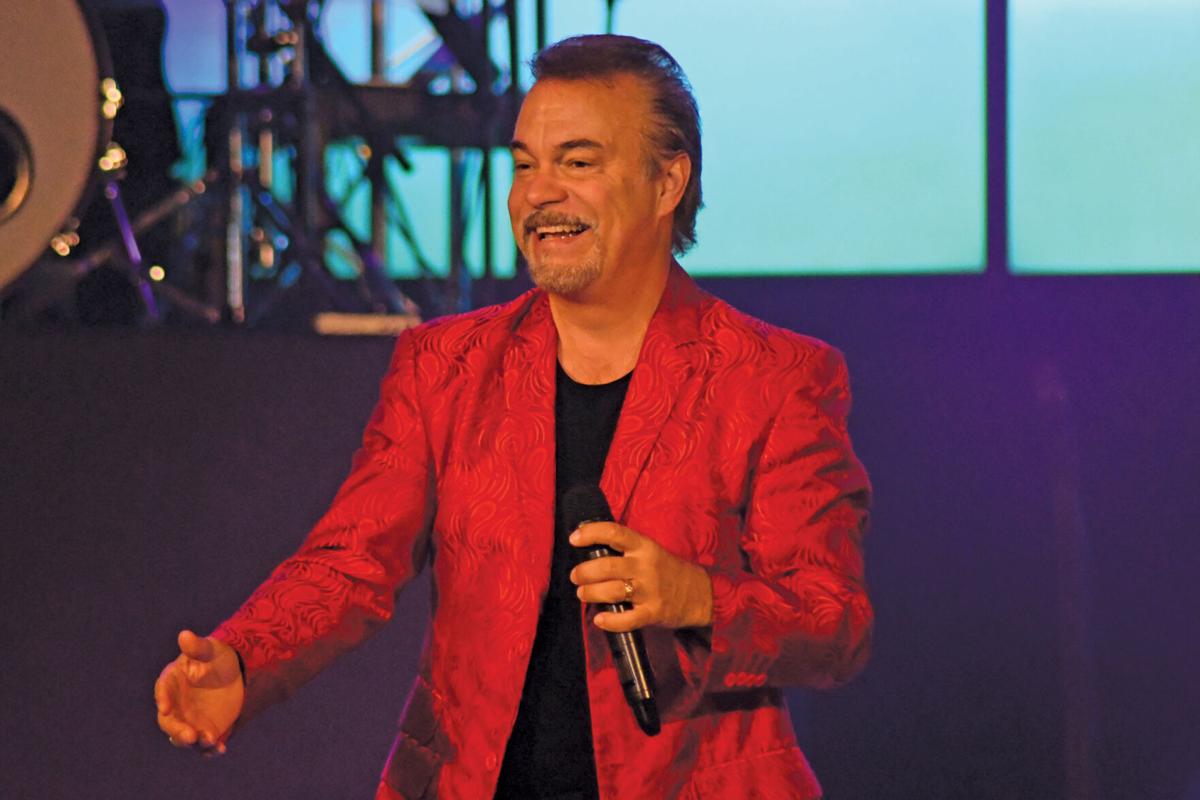 Doug Gabriel visits with the audience during the show and gets to know some of the folks in the crowd.

Branson’s most awarded vocalist and one of the longest running entertainers in town Doug Gabriel invites folks to check out their 2021 show and see some of the updates.

Jordan Gabriel, the comedian for the show, joins his dad on stage to share some of his humor with the audience.

Cheryl Gabriel welcomes folks to the show with her opening number at the beginning of the show.

Stephanie Haygood and Jasmine Gabriel provide backup vocals to Doug during a song set in the show.

The cast of the Doug Gabriel show performs a patriotic section of songs as part of the shows finale.

During the show, Doug and Jordan Gabriel do a comedy act with the assistance of a member of the audience.

Doug Gabriel visits with the audience during the show and gets to know some of the folks in the crowd.

Music, comedy and heart are just three of the things audiences will find on stage when they take in the Doug Gabriel show in Branson.

“I try to pick popular artists, but just to name a few. We do Keith Urban, Tim McGraw, Travis Tritt, Garth Brooks, Billy Joel, Queen, Elvis, Tom Jones, we even do Grand Funk Railroad,” Doug Gabriel said. “My wife does Little Big Town, Stephanie Haygood does Pat Benatar and my daughter does Cindy Lauper this year. The whole thing in our second half is an ‘80s sort of rock and roll tribute. In the first half I try to establish Doug and what I’m all about and all the different things I do.”

Gabriel said the show features some of his favorite classic instrument bits, but also some new pieces as well.

“I added banjo this year. Nobody knows this, but that banjo that I open with Keith Urban on was given to me by my dad over 30 years ago and it had been sitting in my closet,” Gabriel said. “During the shutdown period last year I told my wife, ‘I think I’m going to try and teach myself this banjo.’ It’s a tenor banjo, so it’s like an antique. I literally taught myself by ear. My dad had a book and we got the instrument all fixed up and everything and I taught myself that banjo in early 2020.”

Throughout the show, Gabriel also plays the piano, the guitar and the fan favorite mufftar, a guitar built for him by his father out of a 1969 Thunderbird muffler. When selecting which songs to include in the show, Gabriel said he tries to perform songs everybody loves.

“We just try to pick songs the audience is going to know and the reason we do such a broad base of music styles is we get all ages, from 3 to 93, at our show. I really believe we’re going to hit upon somebody through the course of that show, because there is so much variety in it,” Gabriel said. “On top of that, I do some of my own original songs that I write and it introduces my music to the people. Like ‘Holding Answered Prayer’ that I wrote for my son’s wedding.”

As he’s been performing in Branson since 1985 and has been hosting his own show for the last 26 years, Gabriel said he’s been blessed for the longevity of his career in the entertainment industry.

“All the credit and glory goes to the lord for keeping me in it. Without him I couldn’t do it. We’ve been really fortunate. There’s a lot of companies around Branson that have supported my show and continued to do so…People, I think, sometimes have a perception of Doug Gabriel from years ago, but you saw clearly what I do. I do a lot of people. I’ve been very blessed,” Gabriel said. “One of the main reasons I think we’ve lasted is we change the show up all the time, so all my repeat customers know they’re going to see something new from Doug Gabriel. It’s not the Doug Gabriel of 1994.”

Gabriel said he’s also really proud of his band and the talent they bring to the stage in the show.

“I’ve got the top players. Marty Wilhite on bass, Josh Gabriel on drums, Will Clark on keyboards and Dino Strunk on guitar. You just can beat those four. They’re all award winners. We put on a night time quality show in the morning,” Gabriel said. “My big song this year, ‘Bridge Over Troubled Water.’ That’s real rangy, so I try to show my range in that. We just cover great songs and I have the band to do it with to be honest with you. These guys are very talented.”

On top of the music, the Doug Gabriel show features a good balance of comedy from Gabriel’s son, Jordan.

“I’m so proud of his comedy work. He’s hilarious. He’s come a long way,” Gabriel said. “He’s the comedian of the year. The show has a lot of variety. Not just music, but comedy too.”

During the show Gabriel also welcomes three female vocalists to the stage, one of which is the newest member of the production.

“I’ve got a wonderful cast. I recently hired Stephanie Haygood, Pat Haygood’s wife. She’s terrific. Of course my wife Cheryl and daughter Jasmine. They just do such a good job and they all look great. It makes it for a big show. We’re going on into the future. We always feel like our best days are ahead of us and we’re going to do it until the lord tells us something different.”

The crew of the show also includes Nathan Agdeppa on sound, Nick Monteleon on lights and Todd Eska on spotlight. Gabriel said it means everything to him to have his wife and children performing alongside him at each show.

“To work with my family everyday, I know that’s a blessing from the lord. My son (Josh) is a grown man, he’s got his own wife and kids and he also drums for The Baldknobbers…Jordan is The Baldknobbers sound man. My son, who’s my comedian, he’s their sound man. They all do other things. My daughter is a professional photographer. She’s got her own photography business now and she does good with that. We have two grandbabies. It’s definitely a blessing to get to work with your family everyday.,” Gabriel said. “I will let you know, even my cast and crew are like family to me. We don’t just hire anybody. We think about it, pray about it. We’ve got a great crew. The best I’ve ever had. The best show I’ve ever done in my opinion.”

The current show will continue to run through October, at which point Gabriel said they’ll make the transition to their Christmas show; which begins Nov. 3.

“The way we do it is, we keep our first half like it is and then the second half becomes our family Christmas show. It’s called A Gabriel Family Christmas,” Gabriel said. “I’m also doing something in my Christmas show that nobodies ever done and I play the ‘Hallelujah Chorus,’ I end my Christmas show with that on the guitar. It’s really quite something. Of course I play all by ear, so I had to teach myself.”

Showtimes for the rest of September are Wednesdays and Fridays at 10 a.m. and Sundays at 2 p.m. In October, a 10 a.m. show on Thursdays will be added to the schedule for the rest of the year.

The Doug Gabriel show is performing at the Branson Famous Theater, which is located at 645 State Highway 165 in Branson. For additional information on the show or to purchase tickets visit douggabriel.com or call 417-337-8300.