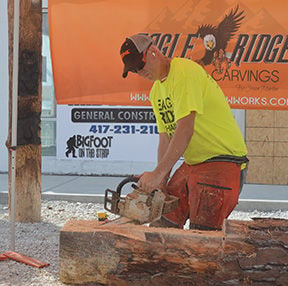 Chainsaw carver Jason Morton, of Springfield, works on a project at Bigfoot on the Strip, which is scheduled to open in March 2017. 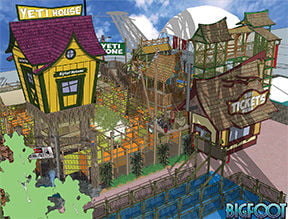 An artist’s rendering shows the Yeti Zone, which will be a featured aspect of Bigfoot on the Strip. The Yeti Zone will include a maze, a treehouse and a Monkey Jump onto a stunt pad. Below right, 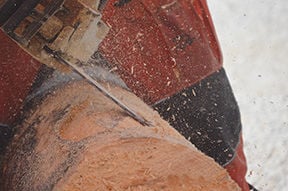 Jason Morton, of Springfield, carves a totem pole Saturday at Bigfoot on the Strip.

Chainsaw carver Jason Morton, of Springfield, works on a project at Bigfoot on the Strip, which is scheduled to open in March 2017.

An artist’s rendering shows the Yeti Zone, which will be a featured aspect of Bigfoot on the Strip. The Yeti Zone will include a maze, a treehouse and a Monkey Jump onto a stunt pad. Below right,

Jason Morton, of Springfield, carves a totem pole Saturday at Bigfoot on the Strip.

There’s something big afoot in Branson.

That would be, as a matter of fact, Bigfoot on the Strip. The project that was initially approved by the city is now well underway. Located on 76 Country Boulevard directly across from the Worlds Largest Toy Museum, the ground is being cleared and a building that once housed a dollar store is being converted into several uses.

The main attraction at Bigfoot on the Strip will be a 200-foot tower that Emma Hamilton said will be “the highest point in Branson.”

But on Saturday, much of the attention surrounded Jason Morton, owner of Eagle Ridge Chainsaw Carvings, of Springfield. Morton was using chainsaws to carve several totem poles for Bigfoot on the Strip. Each totem pole uses images to tell a whimsical story about — what else? Bigfoot.

The poles will be used to house lights and speakers throughout Bigfoot on the Strip.

“The details are very important to us and this is one example of our attention to detail,” she said. “So we sought out Jason Morton.”

Hamilton said he has been carving with chainsaws for more than seven years, but this project is a first for him.

“Carving this way is a whole new game,” he said.

Each pole consists of several individual carvings that make up a single story, and each individual image is not painted and completed until the end.

Morton said he is also accustomed to working on projects that are up around chest level. The totem poles have to be lying down, so he has to do his carving at a much lower angle than usual.

Morton said the trees used for the poles are yellow pine, taken from the Ozarks near Houston, Missouri.

Morton uses several different saws on the project. He uses a larger saw to lop of large segments of wood, and uses a smaller, narrow saw for making finer slices. He also used a power gouger (It looks like a bladeless chainsaw with two small wheels at the tip) that acts like a high-speed chisel. Before using the gouger, he warns spectators that chips will fly.

Hamilton came up with the stories for the totem poles, but Morton comes up with the images.

“He is bringing them to life,” she said.

Short descriptions of the stories will be included with each pole, Hamilton said.

Bigfoot’s main feature will be its 200-foot tower. The tower will feature two rides. One is the Gravity Drop, in which riders are seated on a platform that is lifted to the top of the tower and then dropped in a free fall for 130 feet before earth magnets stop it. The other is a Super Swing that will shoot a pair of riders 215 feet into the air before spinning them around.

Bigfoot will also feature the Yeti Zone, which includes an interactive maze and a treehouse. It also will include a Monkey Jump in which participants can leap off a tower onto a stunt pad.

There will also be a Bungee Dome Jump house in which participants are harnessed for big jumps on a trampoline. The converted building on site will include a state-of-the-art arcade, party rooms and “7D” theater where the viewer not only get a 3D experience, but will also get the sensation of heat, water, wind and other elements in the film.

A food truck dining park will feature five food trucks and a patio eating area. Hamilton said they are working with city officials on their application for the food trucks.

Aldermen are still discussing specifics of an ordinance that would allow food trucks in the city.

Bigfoot on the Strip is expected to open in March 2017, according to Hamilton, although the tower will open at a later date.