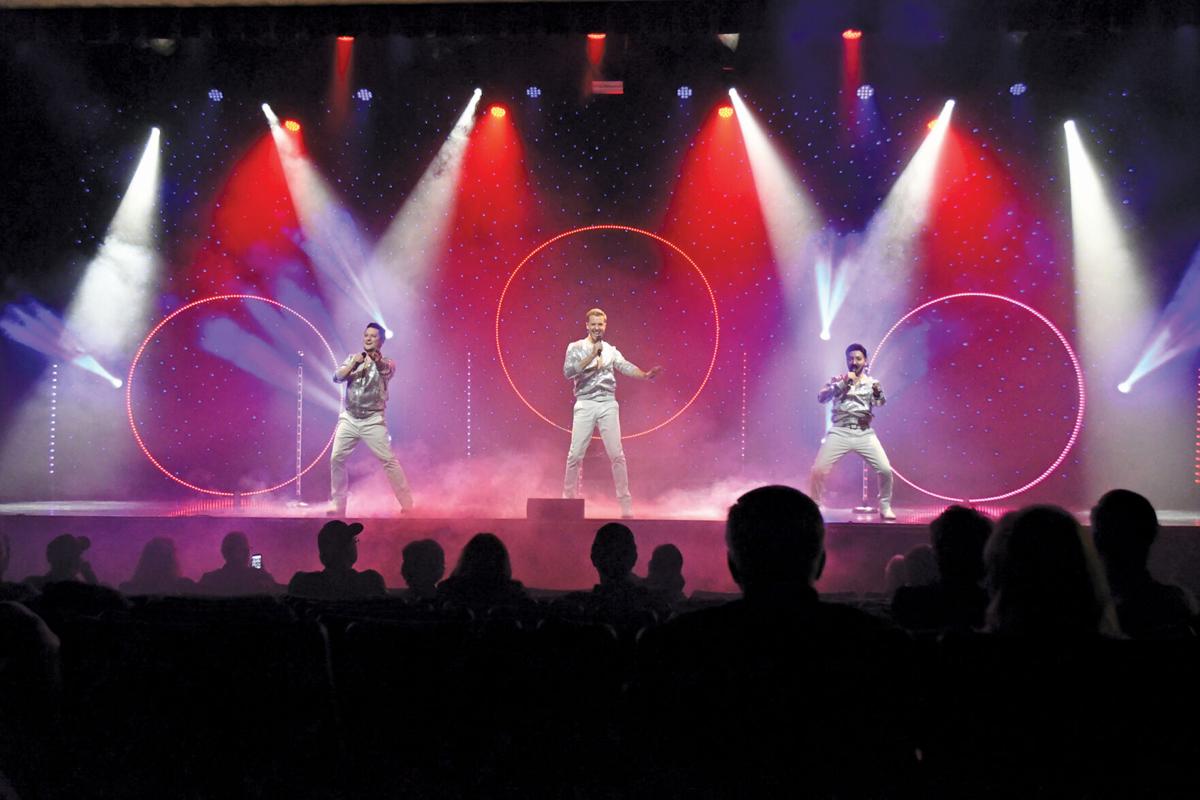 One of Branson’s newest shows, Back to the Bee Gees, is now performing three days a week at Hamners’ Variety Theatre in Branson. 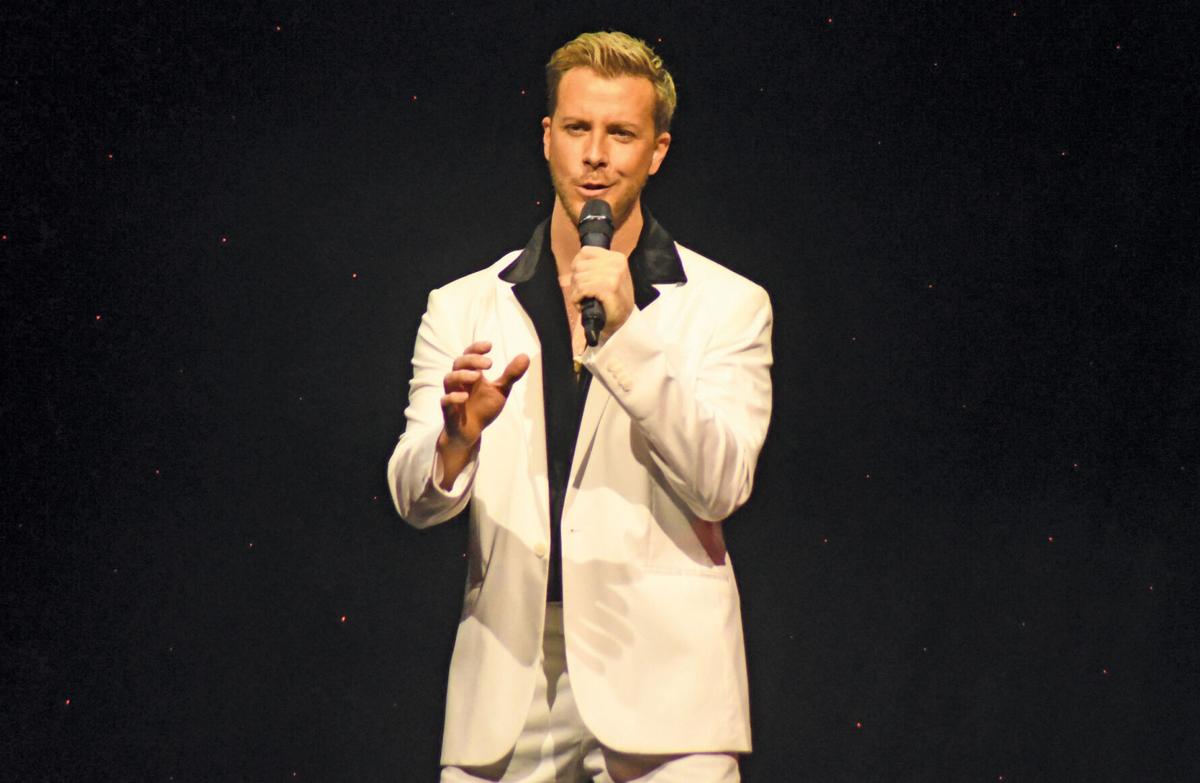 Back to the Bee Gees Co-Producer James Allen of Australia sings some of the songs highest parts in the show. 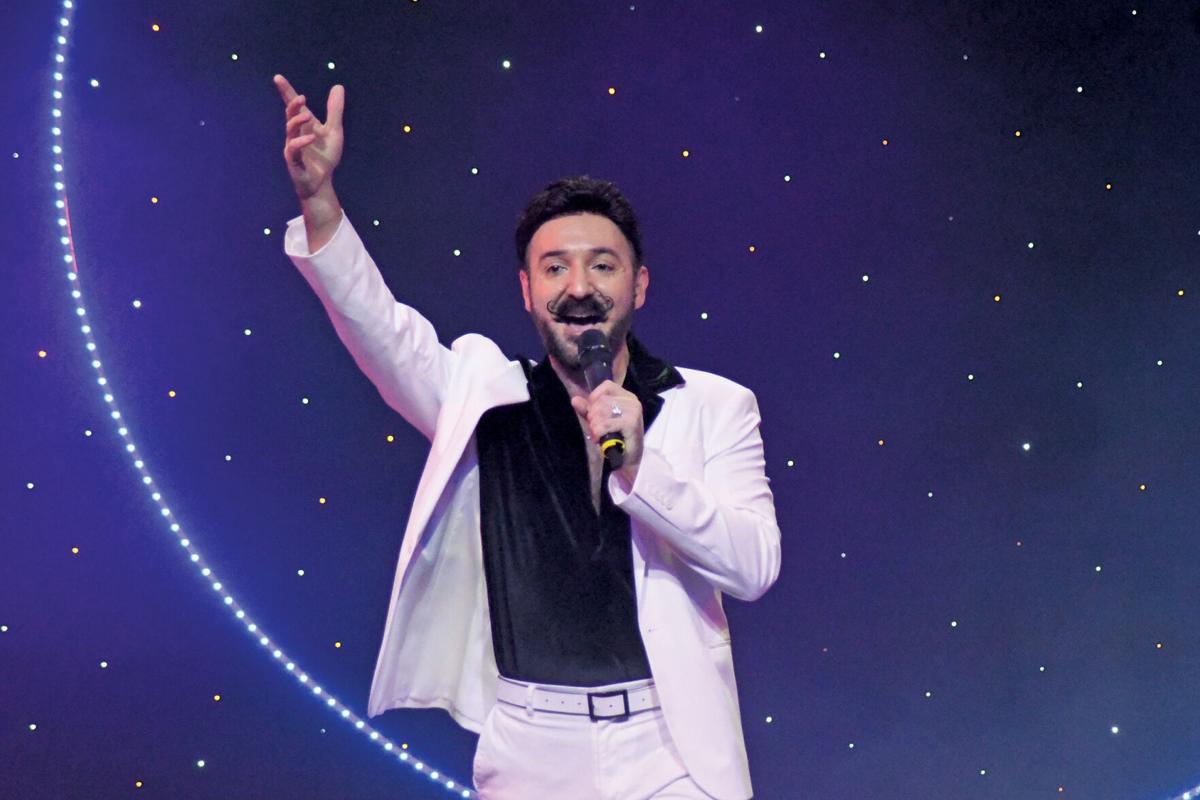 Michael Frost joins Back to the Bee Gees as the third voice to bring the disco trio together on stage. 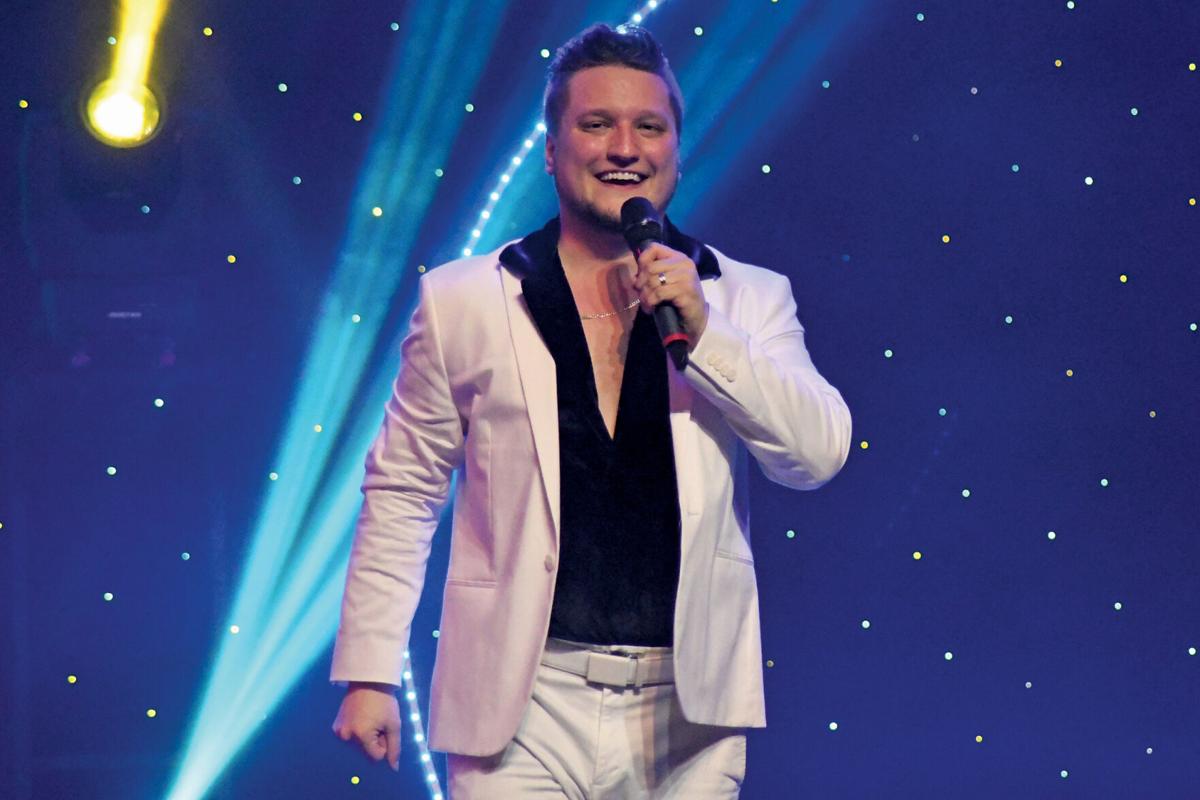 Back to the Bee Gees Co-Producer Stephen Odom said there is something for everyone in the show. 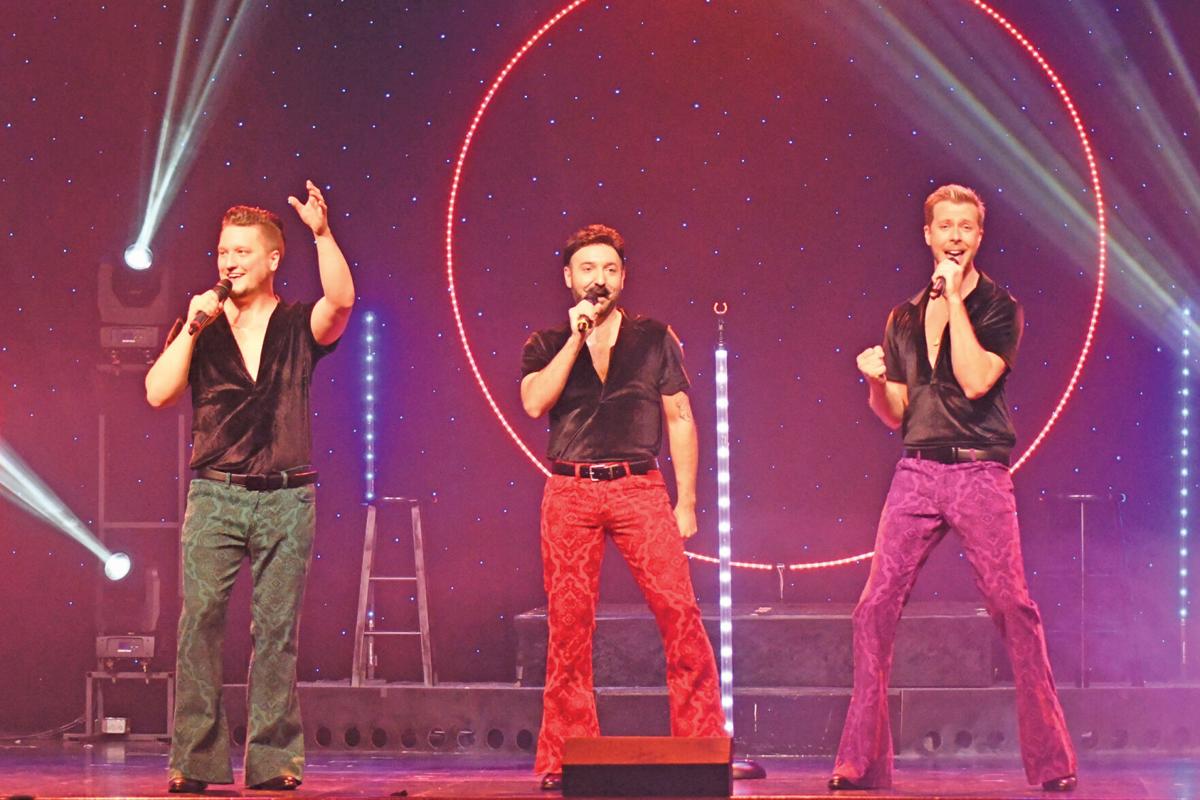 Together, James Allen, Michael Frost and Stephen Odom bring the music of the Bee Gees to the Branson stage. 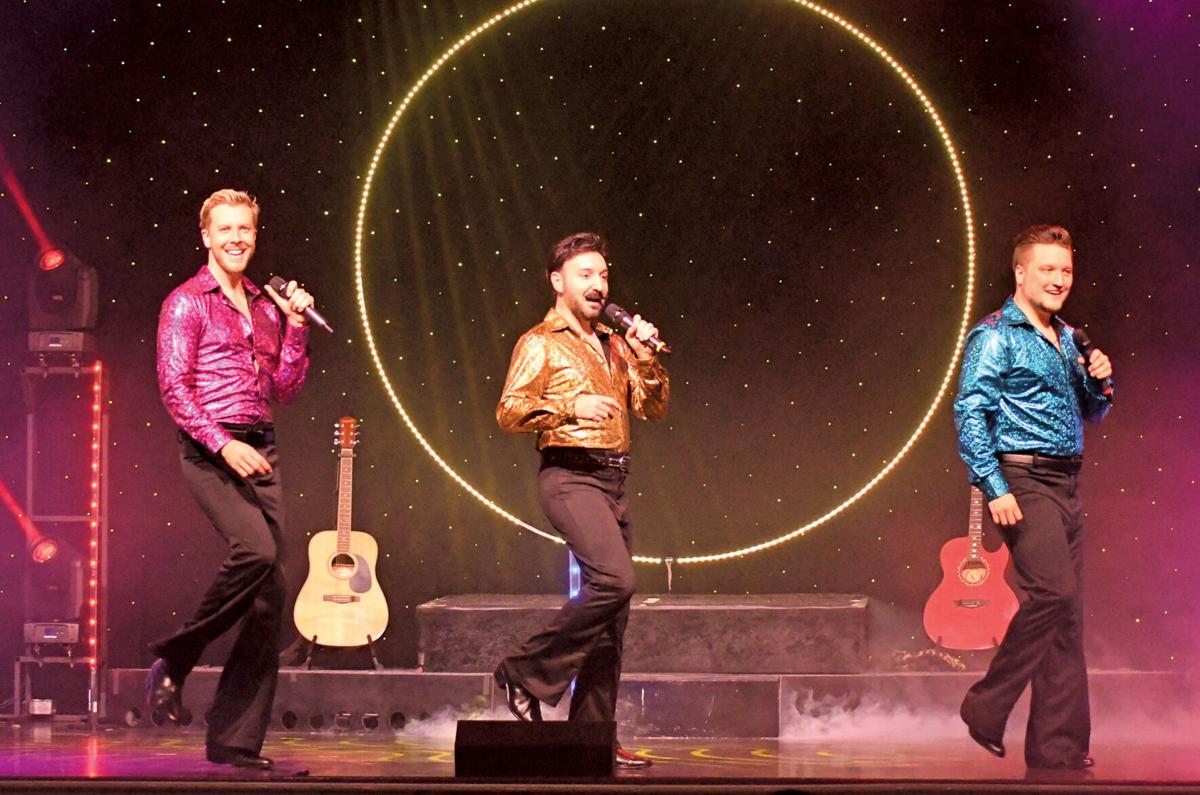 One of Branson’s newest shows, Back to the Bee Gees, is now performing three days a week at Hamners’ Variety Theatre in Branson.

Back to the Bee Gees Co-Producer James Allen of Australia sings some of the songs highest parts in the show.

Michael Frost joins Back to the Bee Gees as the third voice to bring the disco trio together on stage.

Back to the Bee Gees Co-Producer Stephen Odom said there is something for everyone in the show.

Together, James Allen, Michael Frost and Stephen Odom bring the music of the Bee Gees to the Branson stage.

One of Branson’s newest shows are inviting audiences to join them as they embark on a musical journey to travel Back to the Bee Gees.

Now performing at Hamners’ Variety Theatre, Back to the Bee Gees stars the talents of Stephen Odom, James Allen and Michael Frost as they bring the music of Barry, Robin and Maurice Gibb to the Branson stage.

Audiences will be treated to a masterful selection of Bee Gees chart toppers during the show, from “Staying Alive” to “Night Fever” to “More Than A Woman” to “How Deep Is Your Love” as Odom, Allen and Frost perform nearly four decades worth of Bee Gees music.

“It’s not just a disco show. We pretty much do all of their biggest hits and we also do some of the other songs they wrote for other people,” said Allen. “There’s a little something in there for everyone. So we try to encompass everything people expect from a Bee Gees show. We try to pack it all in there.”

Together Odom and Allen also serve as the producers of the show. Allen explained the inspiration for the Bee Gees show came to them as a result of their inclusion in the Thank You For The Music: A Modern Tribute To ABBA show, also at Hamners’ Variety Theatre.

“People love the 70’s and it’s just good music. You can’t argue with good songwriting and good music,” said Allen. “So we were thinking, ‘What’s another band we can pay tribute to?’ Of course, me being Australian, we had to do the Bee Gees and everybody loves the Bee Gees. They have great music from the 60s and all the way up to the 2000s, so it’s all encompassing. You don’t have to be a disco fan. You can be a fan of country or pop music. There’s something in there for everyone.”

When they began looking for another person to complete their Bee Gees trio, Odom said he automatically had a guy in mind.

“Michael, I’ve known for like 10 years now,” said Odom. “We knew immediately who we wanted to be the third guy, so we called him immediately and got him.”

Frost said when he got the call it was a no-brainer for him to join the show.

“I was born in the 70s and I grew up with the Bee Gees, just like a lot of people did. The Bee Gees are, kind of like we say in the show, it’s kind of the soundtrack to so many of our lives and it’s music that we all grew up with,” said Frost. “It’s so much fun. We just encourage everyone to come and check it out and sing along with us, dance along with us and relive a lot of memories that goes far beyond disco.”

Within moments of stepping out on stage, the three performers are quick to let the audience know that they’re not trying to impersonate the Bee Gees, but rather honor them.

“You won’t see the fake wigs and the chest hair,” said Allen. “We are ourselves and we are paying tribute to the music. We’re not impersonating. It’s not an impersonation, it’s a celebration of their music.”

As a part of the show, Allen shared audiences will also be treated to a couple technological delights that will add to their entertainment experience.

“We’ve upgraded our screens in the theatre and we’ve also added some DMX lighting, which is queued with the sound. Everything you see on stage is married into the sound of the show. We’ve got lights that go with every moment, all the accents in the songs. So it’s kind of like a choreographed light show as well,” said Allen. “We also have the edited videos. There’s some history in there, some tidbits and things people didn’t know about the Bee Gees.”

As the song catalog for the Bee Gees is quite large, Allen said it was actually kind of hard to select which ones to include in the show.

“When they have such a huge repertoire of songs it is difficult to pick and choose,” said Allen. “Obviously we do all the big hits that people expect and that they know and love. I don’t know. It’s just a bit of a creative process.”

Odom added, “Some people are huge fans of the early Bee Gees. They only like the early stuff and some people only know the disco stuff. So you want to make sure you include something for everyone no matter what decade you’re a fan of. Their career was so long and their music is so different. The early stuff is so different from the disco stuff, so we just had to make sure we included all of that to give a little taste to everyone no matter what you might like.”

When it came to putting the production together, both Odom and Allen agree that the show pretty much wrote itself.

“The content was already there. We came up with a story line and a script and choreography,” said Allen. “Stephen did all our digital stuff and promo materials, so there’s a lot of in-house things going on. Our set was all hand built by our engineer in-house with all the custom light designs and everything. It was definitely a team effort.”

Though a challenge, Odom said it’s been fun to build a show from scratch.

“We’ve had a blast. The three of us, we’ve been rehearsing for a few months,” said Odom. “Michael brought a different take on things and a different creative eye and sound that maybe we hadn’t thought of when we were writing the show, so everything changed and evolved. We’ve had so many cool elements that we’ve been able to work together to bring to the show.”

Frost added, as the Bee Gees were known for their extremely high singing voices, there was also the vocal challenge to overcome.

“We’re not trying to impersonate them, but we still want to have that falsetto sound in certain songs,” said Frost. “It’s been a challenge to pull that off, but I think we’re doing OK.”

While the trio joked that they’re able to find the falsetto sounds of the Bee Gees through the use of tight underwear and prayer, it’s actually something they’ve been training their body to do.

“It’s a muscle,” said Odom. “We’re just now getting more used to it, because we’re just getting into the swing of things, but you build up that stamina and you’re able to do it longer.”

Included in the show is a segment the trio likes to call “I didn’t know the Bee Gees wrote this song?” While Allen joked that the segment’s inclusion was a way for them to take a break from singing so high, Frost explained that the songwriting part of the Bee Gees career is an important part of history.

“After the disco era the Bee Gees … had to transition as disco was such a short lived era,” said Frost. “I was watching a documentary on the Bee Gees on HBO the other night, just to get some of their history and that’s one of the things they talked about; why they wanted to go into song writing in the early 80s. So a lot of those songs come from that period where they wrote big hits for other artists.”

Odom added that another reason they wanted to include the segment was due to it being something you wouldn’t see at a traditional Bee Gees tribute show.

“You would not hear those songs. You wouldn’t hear ‘Heartbreaker’ and ‘Emotion’ and ‘Islands in the Stream,’ so since we’re doing a little bit of a different take we can do those kinds of songs. I think it’s unexpected, but it’s a welcome surprise because they’re great songs.”

For another part of the show, the performers also take a moment to pay tribute to the youngest of the Gibb brothers, Andy.

“Another unexpected thing,” said Odom. “At a typical Bee Gees tribute you wouldn’t hear Andy Gibb’s songs probably. They’re such great songs that I felt we had to be include them.”

Showtimes for Back to the Bee Gees are Wednesdays and Saturdays at 5 p.m. and Fridays at 8 p.m. For additional information call 417-334-4363 or visit backtothebeegees.com.