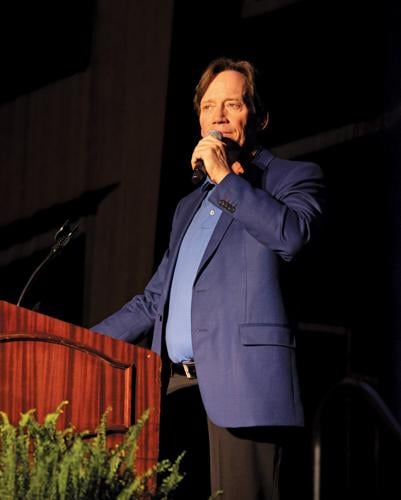 Actor Kevin Sorbo spoke to those in attendance about his life and his journey as a Christian in Hollywood. 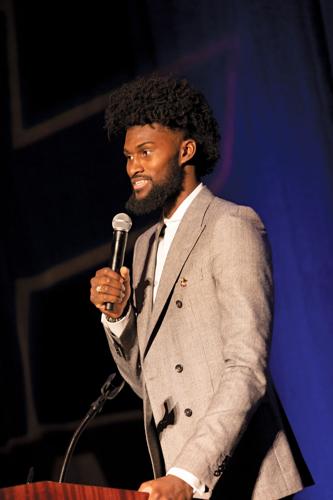 Jonathan Isaac with the Orlando Magic shared his thoughts on being a Christian athlete and his new book. 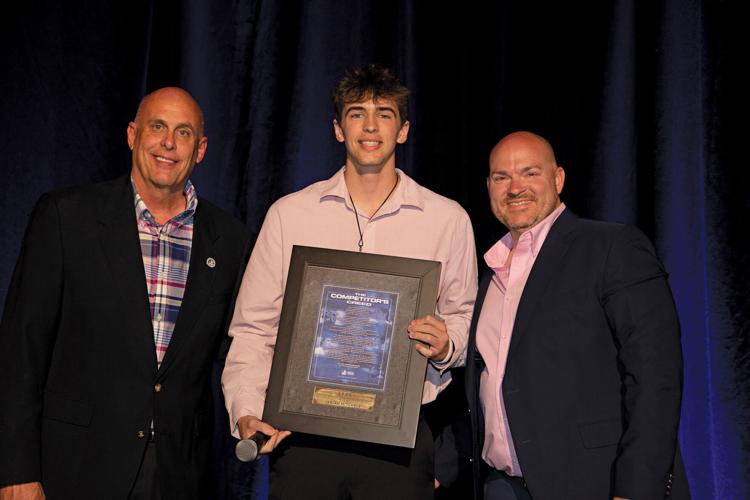 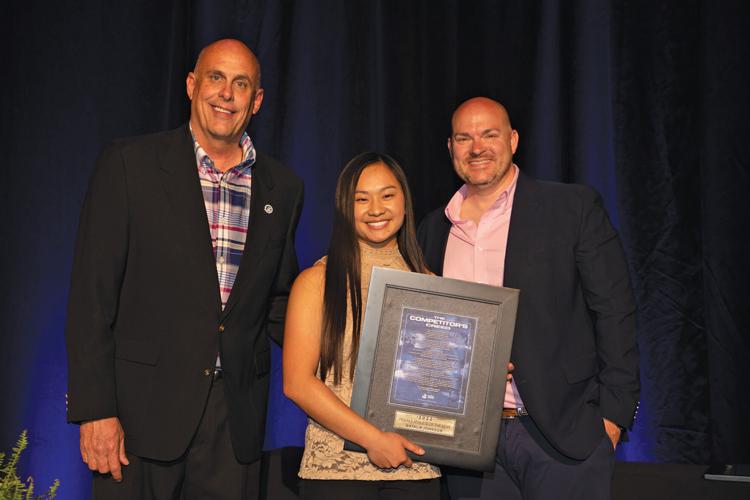 Southwest High School Student Natalie Johnson was named 2022 Female Athlete of the Year at the banquet. 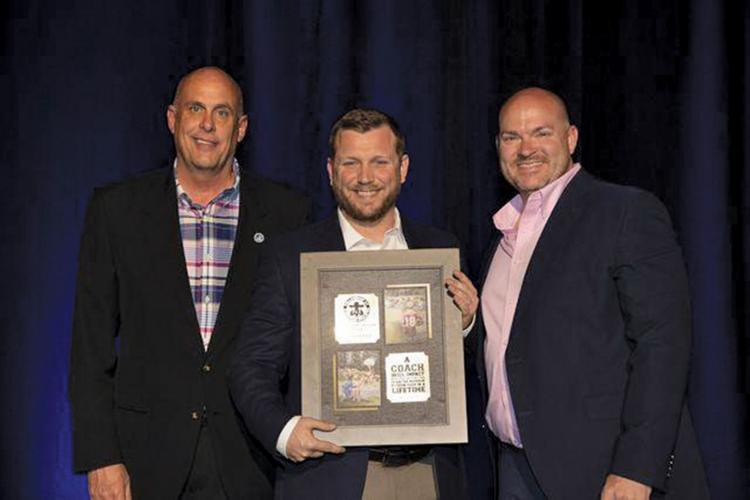 Branson High School Coach Anthony Hays was named 2022 Coach of the Year at the FCA Banquet.

Actor Kevin Sorbo spoke to those in attendance about his life and his journey as a Christian in Hollywood.

Jonathan Isaac with the Orlando Magic shared his thoughts on being a Christian athlete and his new book.

Southwest High School Student Natalie Johnson was named 2022 Female Athlete of the Year at the banquet.

Branson High School Coach Anthony Hays was named 2022 Coach of the Year at the FCA Banquet.

Branson once again welcomed Actor Kevin Sorbo back to the area on Thursday, April 14, along with Orlando Magic NBA Player Jonathan Isaac.

Sorbo and Isaac served as two of the special guest speakers at the South Central Missouri Fellowship of Christian Athletes 2022 Banquet at The Chateau on the Lake Resort and Convention Center. Area news outlets were given the opportunity to participate in a media roundtable with both Sorbo and Isaac ahead of the banquet on Thursday.

When asked what topics he planned to touch on with those in attendance during the upcoming banquet, Sorbo shared he would be speaking on a variety of subjects.

“I’m not going to be too filtered tonight. I’m going to tell my story. People are curious how I got from point A to Point B and the journey along the way. The strokes I had suffered in the fifth year of Hercules and my recovery from that. I’m talking about the battle we have in front of us right now. We need to be warriors for Christ is the way I look at it. We need to wake up. It’s insane what we’re doing to this world right now,” Sorbo said. “I’m hopefully going to get people to wake up a little bit and not be afraid to lose friends, because they weren’t friends to begin with and they’re not going to support you. Tolerance and freedom of speech have become a one way street owned by the mainstream media and owned by Hollywood and I’m getting a little tired of it.”

As an outspoken Christian conservative, Sorbo shared the effect that has had on his place in the industry.

“A Christian conservative in Hollywood is the equal of being a double leper. I actually got booted out about 10 or 11 years ago. My agent manager called me and I thought it was like an intervention was going to happen and they said, ‘We can’t work with you anymore’ and I laughed at them. I said, ‘Apparently tolerance is a one way street with you guys,’ because we’re supposed to be tolerant of everything they did, agendas they wanted to push on us. It’s evil what’s going on out there. It’s evil. It really is and it’s just gotten worse in the last few years.”

In response, Sorbo said God provided him and pointed him down a different road and different door to go through.

“I still love the industry. I still love making movies. I still like being creative, so we formed sorbostudios.com, my wife and I. We’re just kind of doing our own thing right now. Every time we’ve been fortunate to get funded for a movie I do, it’s always been a God thing,” Sorbo said. “I’m trying to do movies that made me fall in love with movies in the first place. Movies my mom watched and I watched with her when I was a kid with Spencer Tracy, Cary Grant and Jimmy Stewart. Those are the movies I like to do.”

Following his address to those in attendance at the banquet, Sorbo shared what he hopes folks will take with them after hearing his message.

“That they don’t let anyone set their limitations. That they fight. They fight the good fight. Don’t be afraid to stand up and shout out when we’re supposed to and how we’re supposed to go for that light on the hill and not be afraid,” Sorbo said. “Jesus was the original man walking the road less traveled and we need not to be afraid to get on that road. He says in the Bible. People will come after you, just like they came after him.”

“I’m feeling good. Pretty much got my eyes set on coming back next season,” Isaac said. “Training staff, me, and the coaches all feel pretty good about that. This is going to be a fun summer of doing book stuff, rehabbing and getting back to it next season. I’m looking forward to it.”

“Around the time the Black Lives Matter thing went wild and the tragic death of George Floyd…there was immense pressure for all of the players to kneel and wear a Black Lives Matter t-shirt and I ended up being the only player not to do so. I chose to stand for the National Anthem and not wear the Black Lives Matter t-shirt, but my reasoning was that I saw everything everybody else saw. Obviously the tragic death of George Floyd and all of the other things. Not just racism. Not just that, but all the things that plague our society and when I looked at my life, it has been Christ who has defined me. His love has helped me with so many different things: fear, anxiety. The love of God has been the thing that has transformed my life and I wanted to stand and offer that as a message to the world, not even to just that situation, but the world.”

The book, which Isaac wrote in partnership with The Daily Wire, talks about his life journey that led up to him taking a stand.

“From childhood, from my parents splitting up, to really struggling to find my identity in basketball and it being my end all be all,” Isaac said. “Then coming to the Orlando Magic and meeting different people, meeting a pastor there in Orlando and recommitting my life to Christ. I grew up in a Christian household and from there I’ve just been growing as a man of God and chose to make that decision.”

Isaac shared pretty much from the beginning of the Black Lives Matter movement, he felt uneasy with it.

“I never felt comfortable in the Black Lives Matter space, declaring that Christ was the answer ultimately. So I would be talking with friends, ‘That’s tragic, that’s awful’ and then I would say, ‘I believe that Christ is the answer,’ and that’s where the divide would happen. They saw the problem, but they didn’t see that as the answer.”

Isaac added, thanks to his career playing in the NBA he’s been given a platform to honor God and share his love with others.

“When it comes to young kids, many of them find their identity in the game like I did. If you make a shot or you miss, if you win or you lose, if you’re up or your down, but ultimately when your identity and foundation is found in Christ the smaller matters of this world don’t move you,” Isaac said. “What I’ve been able to do is talk to kids. The book is so much about identity and how I struggled with identity as a kid, how I struggled with love as a kid and ultimately how all of that was solved and continues to be solved by the love of Christ. I really feel like this book and me, the platform God has given me to reach the youth and the young athletes in this world and everybody ultimately that the love of God gives this country and he gives this world.”

Next year the South Central Missouri FCA Banquet will be hosted on April 11, 2023 and welcome special guest Jim Kelly from the Buffalo Bills.