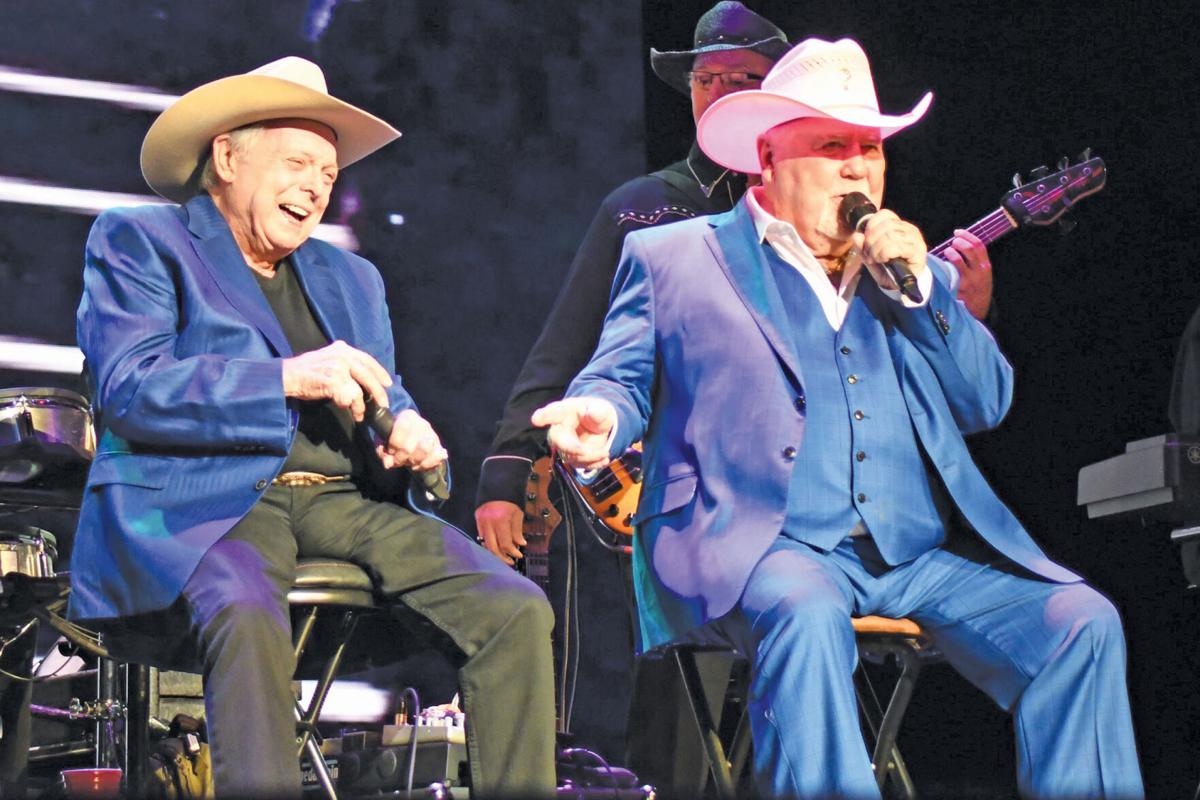 Mickey Gilley and Johnny Lee sing some of their songs used in “Urban Cowboy” at the end of the show. 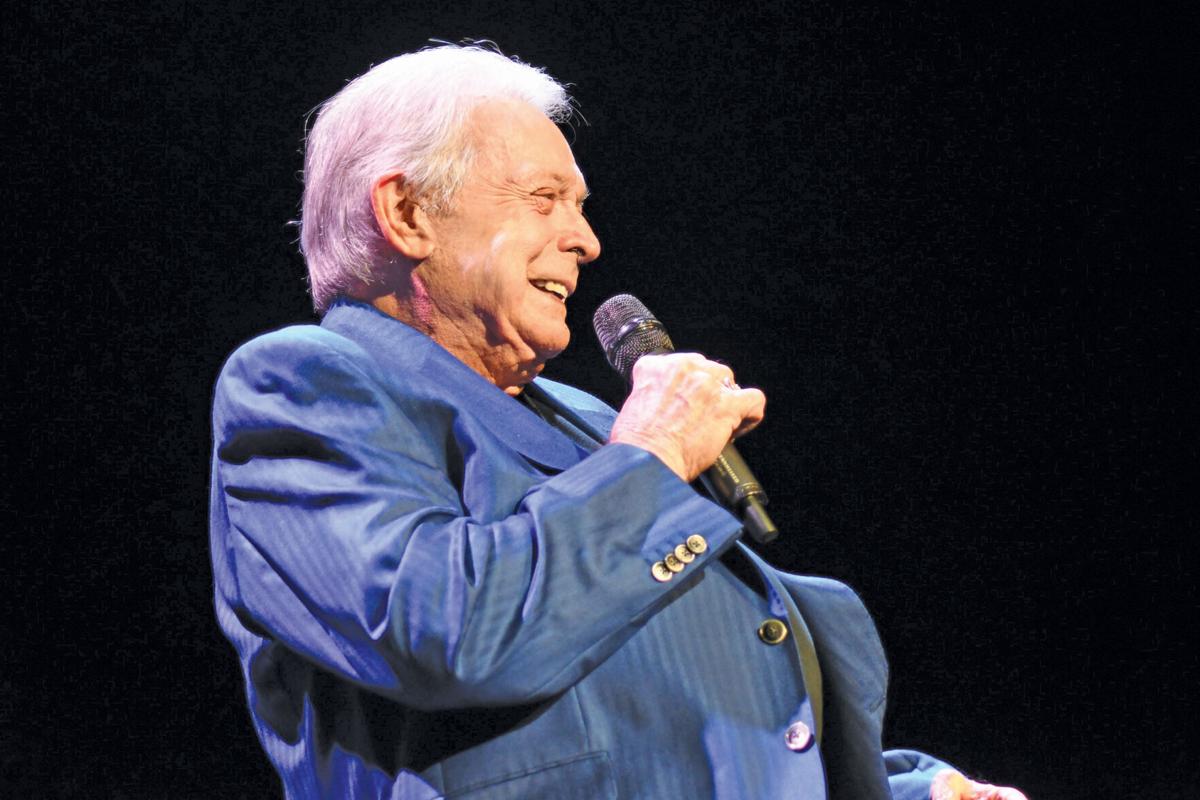 Mickey Gilley takes to the stage at the Mickey Gilley Grand Shanghai Theatre to sing some of his No.1 hits as well as share stories from his life in the music industry. 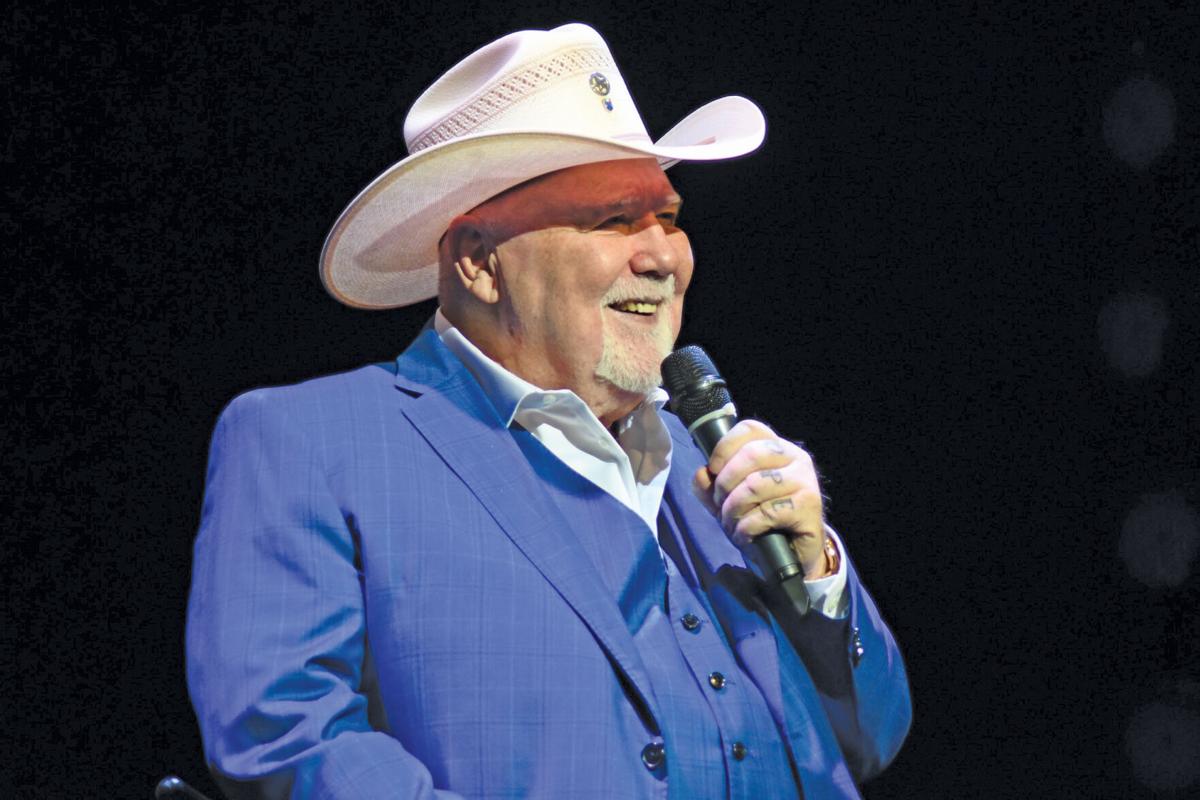 Between his song sets, Johnny Lee also shares a few stories as well as a couple of jokes at the Urban Country Reunion Tour show. 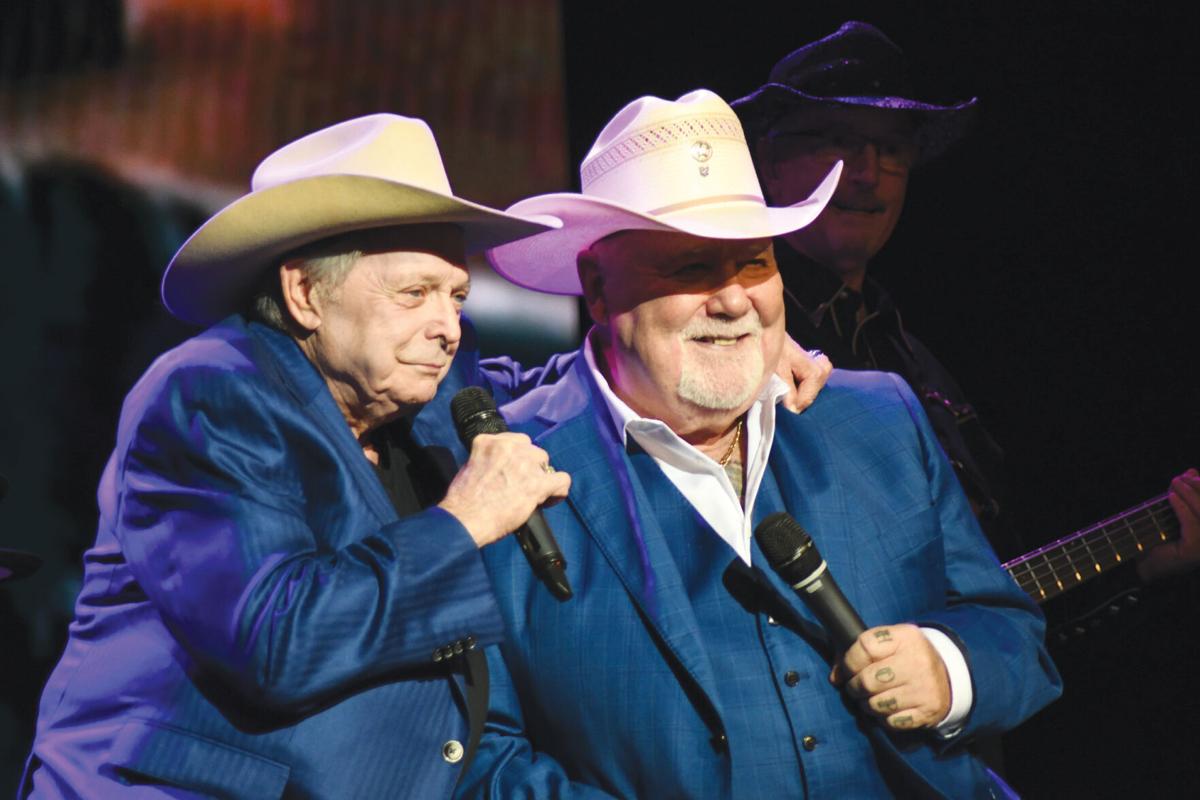 Mickey Gilley and Johnny Lee sing some of their songs used in “Urban Cowboy” at the end of the show.

Mickey Gilley takes to the stage at the Mickey Gilley Grand Shanghai Theatre to sing some of his No.1 hits as well as share stories from his life in the music industry.

Between his song sets, Johnny Lee also shares a few stories as well as a couple of jokes at the Urban Country Reunion Tour show.

Returning to his former 76 Strip theatre for select performance dates in October and November, country music legend Mickey Gilley has once again found his way back to the Branson stage. Of course, joining Gilley in Branson is his long-time friend Johnny Lee as they take to the stage for their Urban Cowboy Reunion Tour.

As two of the stars of the 1980 John Travolta film, “Urban Cowboy,” which was set and shot at Gilley’s bar in Texas, Gilley and Lee reunited in 2018 for the reunion tour, which has since traveled all over the United States for performances.

Gilley said that, as part of their reunion show, his promise to audiences is that they’ll only be doing their No. 1 hits.

“Johnny has his big songs, ‘Looking for Love in all the Wrong Places,’ ‘Cherokee Fiddle,’ the soundtrack to ‘Urban Cowboy,’ which we both do. I have ‘Stand By Me,’ which of course was an old remake of an old song, but it was a No. 1 song for me in the ‘Urban Cowboy’ movie. I also have ‘Here Comes the Hurt Again,’” said Gilley. “I’m doing my performance and he’s doing his performance. Then we close with the Urban Cowboy music, for which he joins me back on stage, which makes the show a little more interesting and entertaining.”

During the show and in between singing any one of his 17 No. 1 hit songs, Gilley said he enjoys sharing his life story with the audience.

“I talk about my beginning and going through the years where I struggled in the music industry trying to be successful, following my cousin Jerry Lee Lewis. I grew up in Louisiana with Rev. Jimmy Swaggart, and we all three had success in a different type of music. Rev. Jimmy Swaggart was a gospel singer and Jerry Lee was in the Rock and Roll Hall of Fame, and I had 17 No. 1 Country songs. We’re all in our 80s now, and there’s only six months difference in our ages. So it’s quite a story when you look at all the aspects that we’ve done in music,” said Gilley. “In my show I do the music for the folks and I tell them a little bit why we pick certain songs and what happened and that type of thing to give them more of an idea of what you go through sometimes to be successful in music.”

Gilley said one of his favorite stories to tell is how his first hit song, “Room Full of Roses” came to be in 1974. Gilley explained that he was in the studio recording the song “You Call Me Baby” and needed a song for the ‘B Side’ of the record.

“I happened to pick what I felt like was a throw away song called “Room Full of Roses,” which was written by Tim Spencer who was one of the Sons of the Pioneers,” Gilley said. “I sat at the piano and I started the song and I quit about 35 or 40 seconds into it and the bass guitar looked over at me and says, ‘Why did you quit?’ and I said, ‘Because I think it’s going to sound too much like my cousin Jerry Lee Lewis.’ He said, ‘Who cares, it’s going to be the ‘B Side’ and nobody’s ever going to hear it.’”

Gilley goes on to explain when the record came out and the song become a No. 1 Country hit, it wasn’t long before folks started to notice; including Conway Twitty.

“Conway Twitty is coming down to play at Gilley’s. I talk about that sometimes in the show. It just depends were I’m at in the performance. I talk about him coming down. I got to open the show for him that night. I had never met him. When I closed with a “Room Full of Roses,” when I closed my set, I walked back to him and the first thing he said to me was, ‘Do you have an agent?’”

Gilley shared that within two weeks he had signed on with the agency owned by Twitty and Loretta Lynn and was then traveling with Twitty to open his shows. The following years were good to Gilley, with the release of some of his other No. 1 hits, including “Don’t the Girls All Get Prettier at Closing Time.”

However Gilley’s biggest break yet came in the form of a little article written in Esquire Magazine.

“My business partner, I was on the road traveling with Conway, and he installed this mechanical bull in Gilley’s to attract people from the rodeos. We have the Pasadena Rodeo and the Houston Live Stock Show and  Rodeo. Low and behold this guy came down from New York by the name of Aaron Latham and writes this article, “The Ballad of the Urban Cowboy,”” said Gilley. “We did the film and of course the film launched me and Johnny Lee into the stratosphere at that time.”

Following his role in “Urban Cowboy”  Gilley found himself performing in the main showrooms in places like Las Vegas, Reno, Tahoe and Atlantic City and even traveling to Europe to perform. Gilley also performed for Presidents Ronald Regan and George H.W. Bush, got a star on the Hollywood Walk of Fame and landed several television acting roles in shows like “The Fall Guy,” “Fantasy Island,” “Dukes of Hazzard,” “Murder She Wrote” and “CHiPs.”

As “Urban Cowboy” is celebrating its 40th Anniversary this year, Gilley and Lee have decided to make 2020 the final year for their reunion tour.

“This year is the end of the Urban Cowboy Reunion Tour that Johnny Lee and I were doing together,” Gilley said. “That does not mean that Johnny and I will not work together again, it just means that … if we’re booked again, it will be like he does his part, I do my part and then the show’s over with. Right now we have Johnny Lee opening the show, we have Mickey Gilley come out and doing his bit and then Johnny joins him back on stage and we do the grand finale, which is about 25 minutes long. That’s going to go away. This is the last year for that.”

Additional show and ticket information can be found at mickeygilley.amazingacrobats.com or by calling the box office at 417-336-0888.