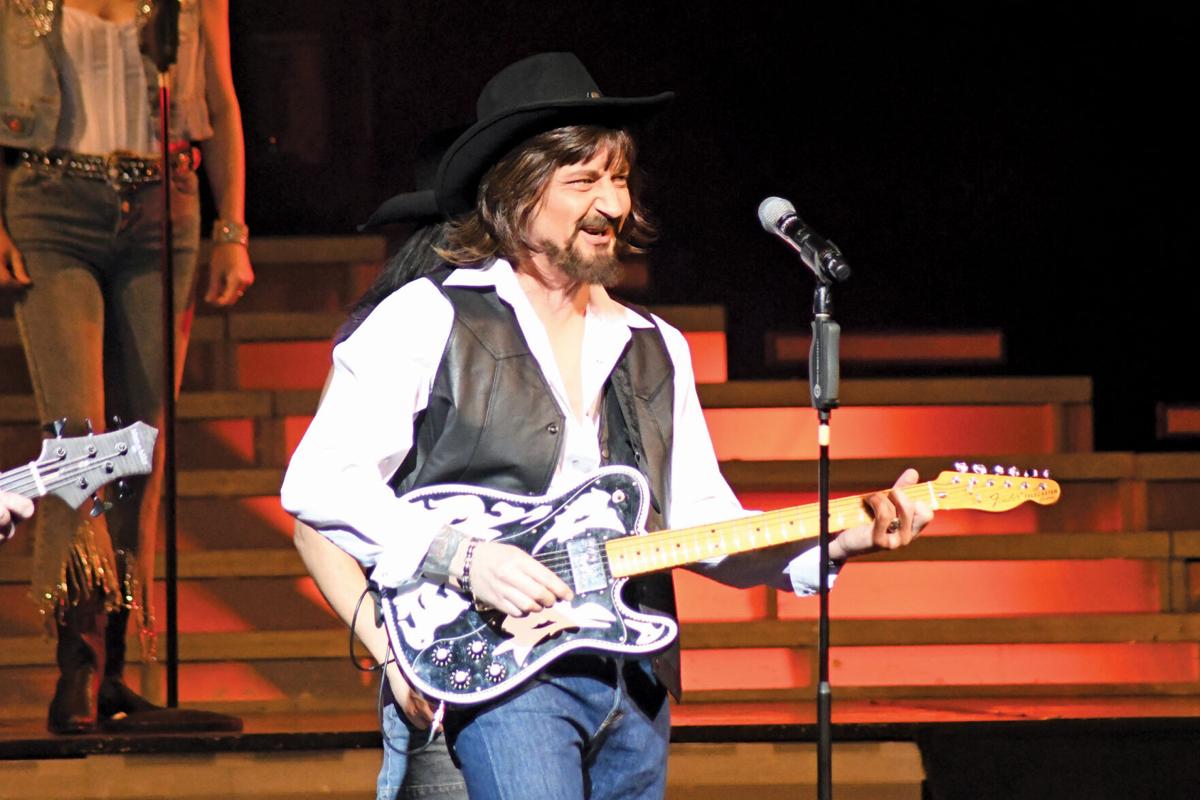 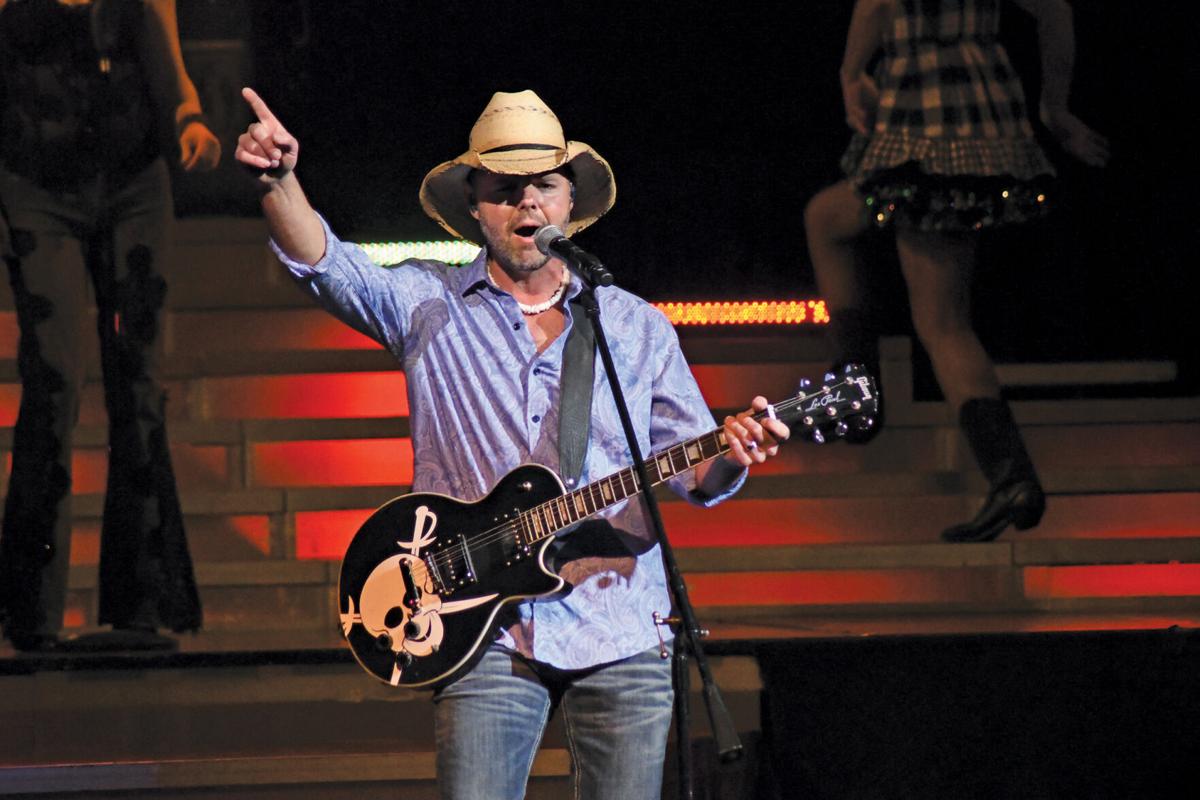 Todd Bradshaw as Kenny Chesney serves as the Legends of Country Emcee and sings throughout the show. 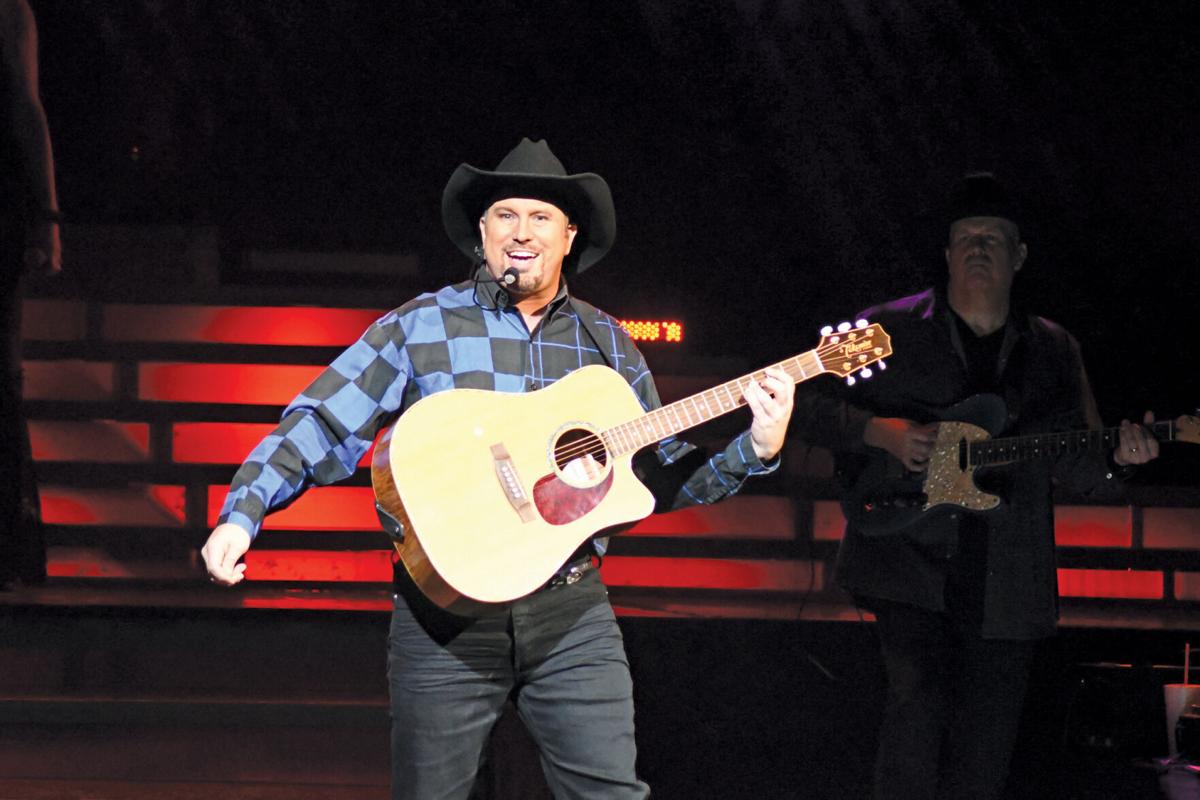 Clint Niever as Garth Brooks brings out the guitar as he performs during the Legends of Country show. 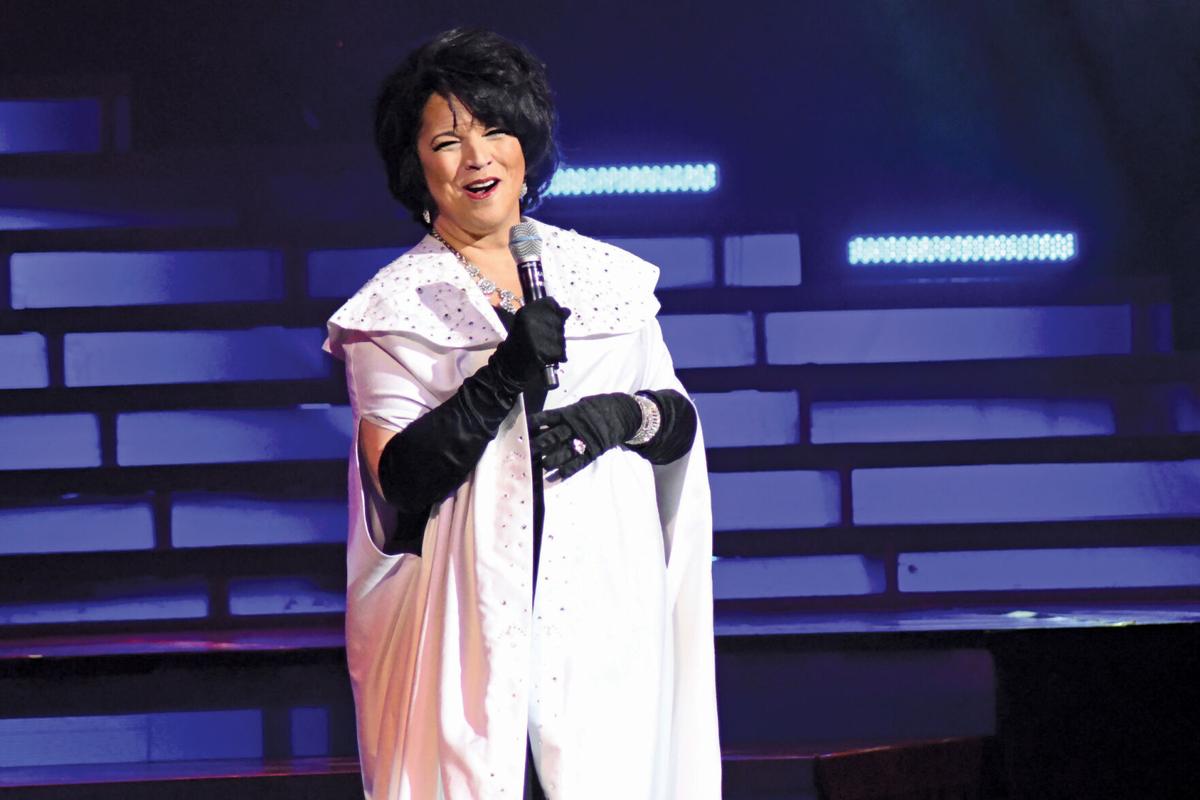 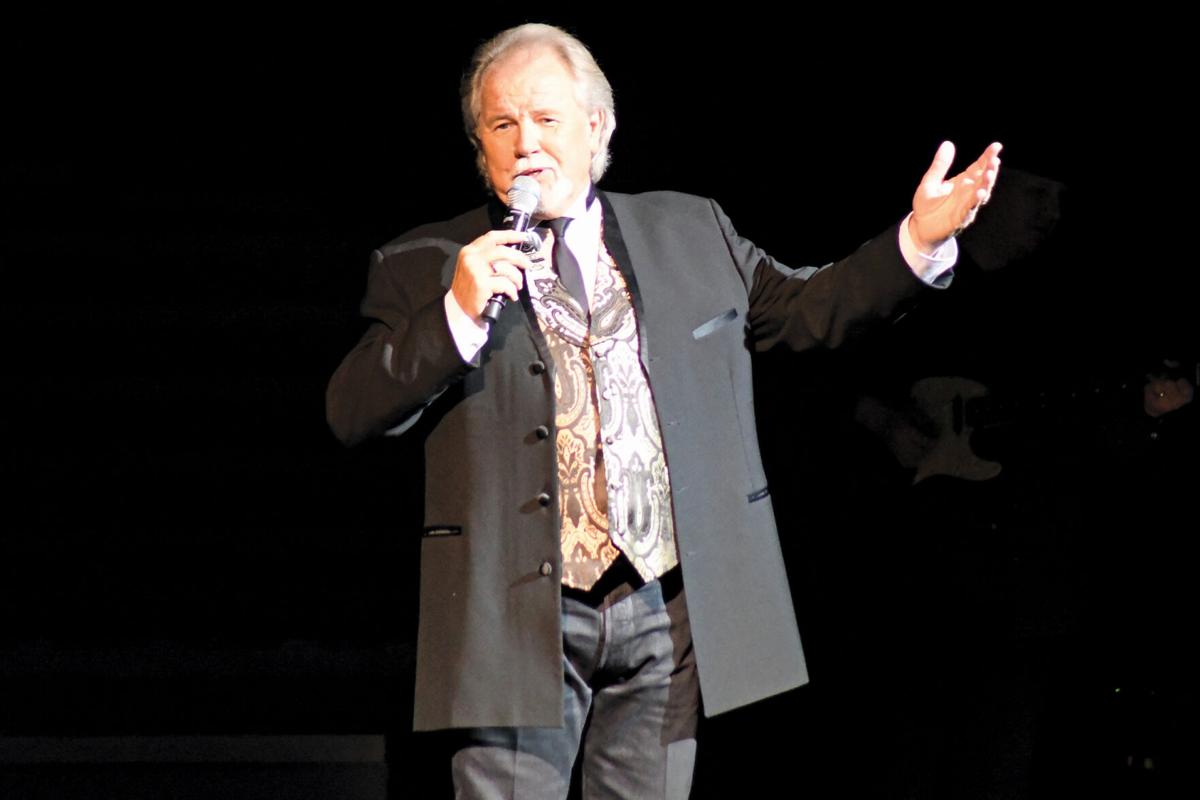 Rick McEwen as Kenny Rogers sings “Lucille” as part of the Legends of Country show. 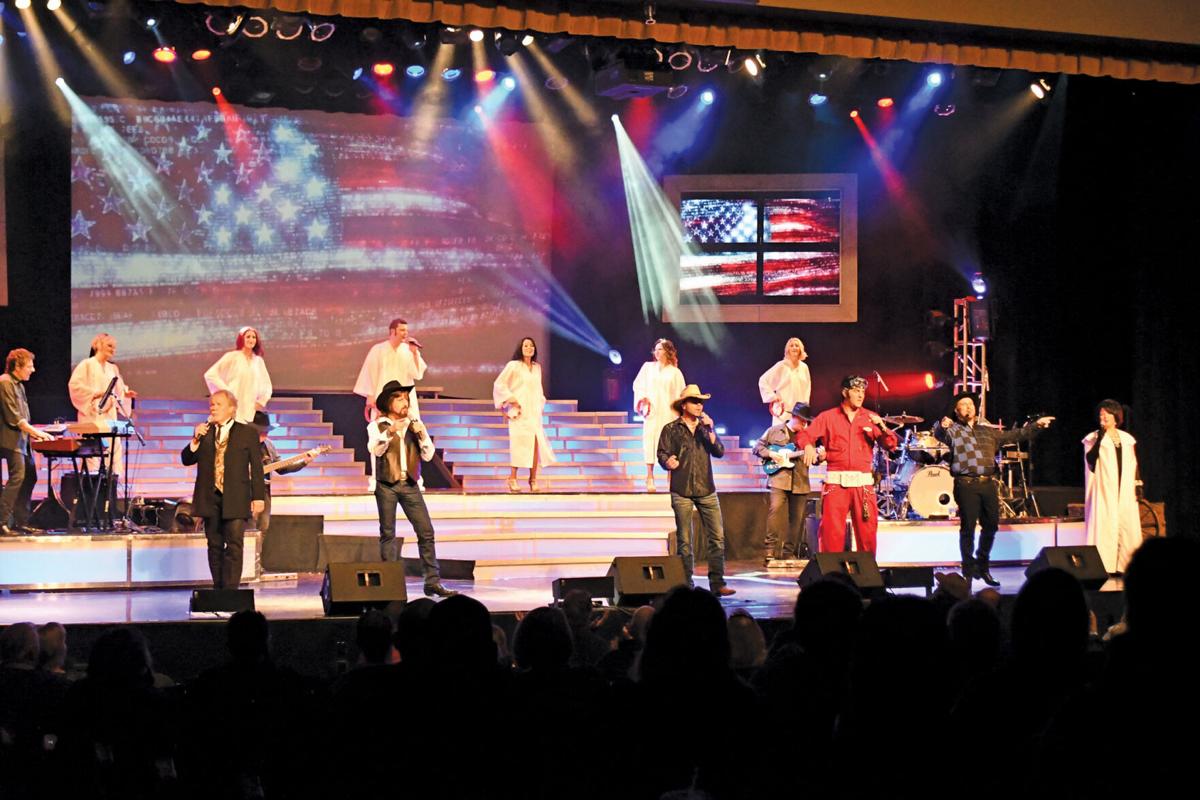 The all-new Legends of Country performs every Sunday afternoon at 3 p.m. at Dick Clark’s American Bandstand Theater in Branson. 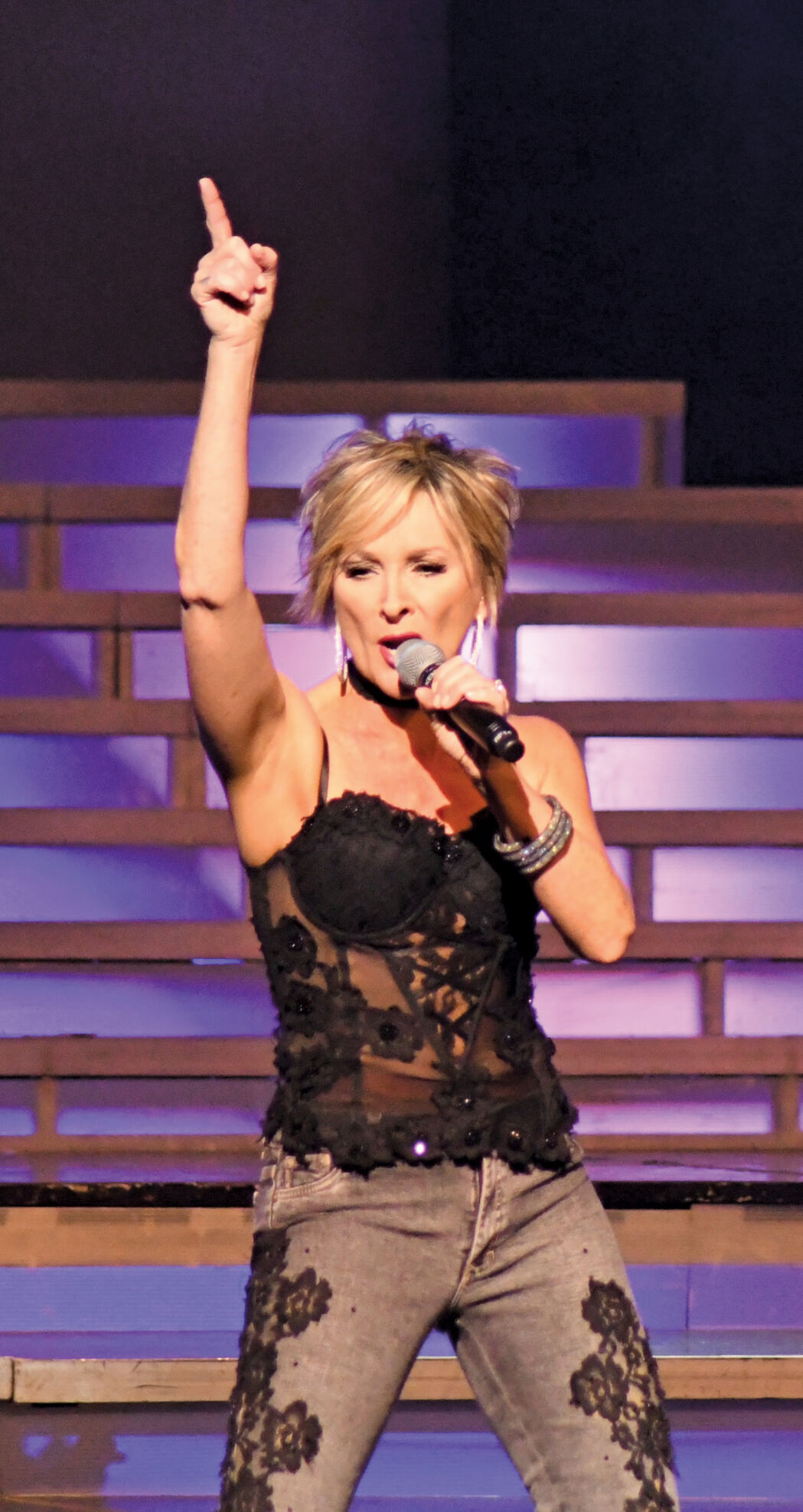 Backup Singer Kenya Wilhite sings a solo to help kick-off the start of the Legends of Country show. 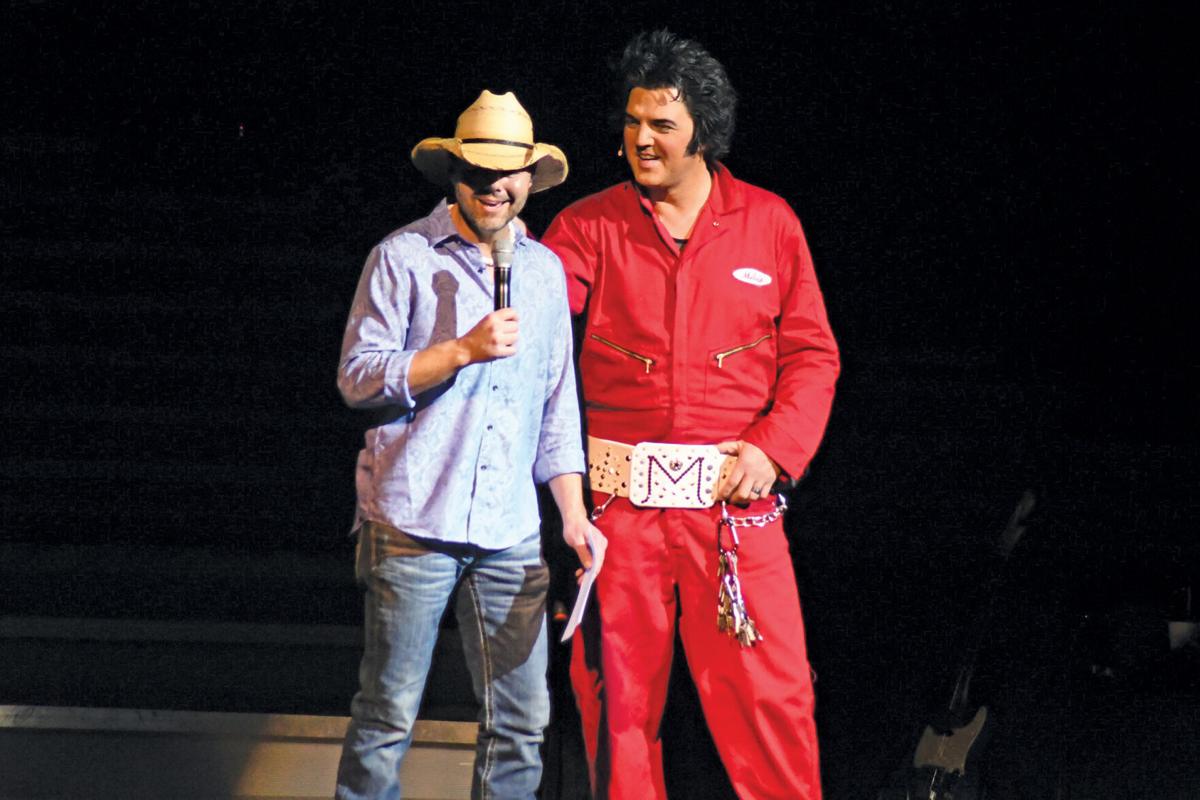 Legends of Country features a cameo appearance by Ryan Pelton as Elvis Presley as Melvis the Maintenance Man. 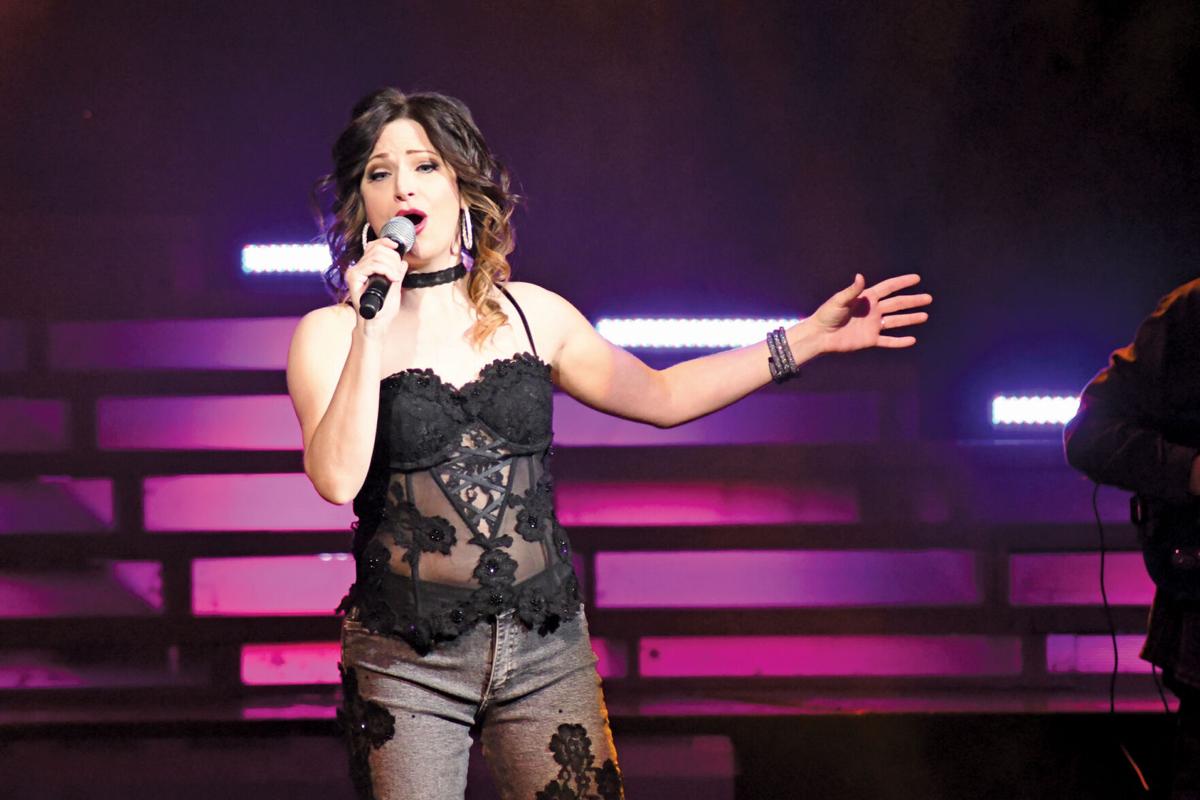 Backup Singer Kelly Church performs alongside Rick McEwen as Kenny Rogers for a special duet in the show. 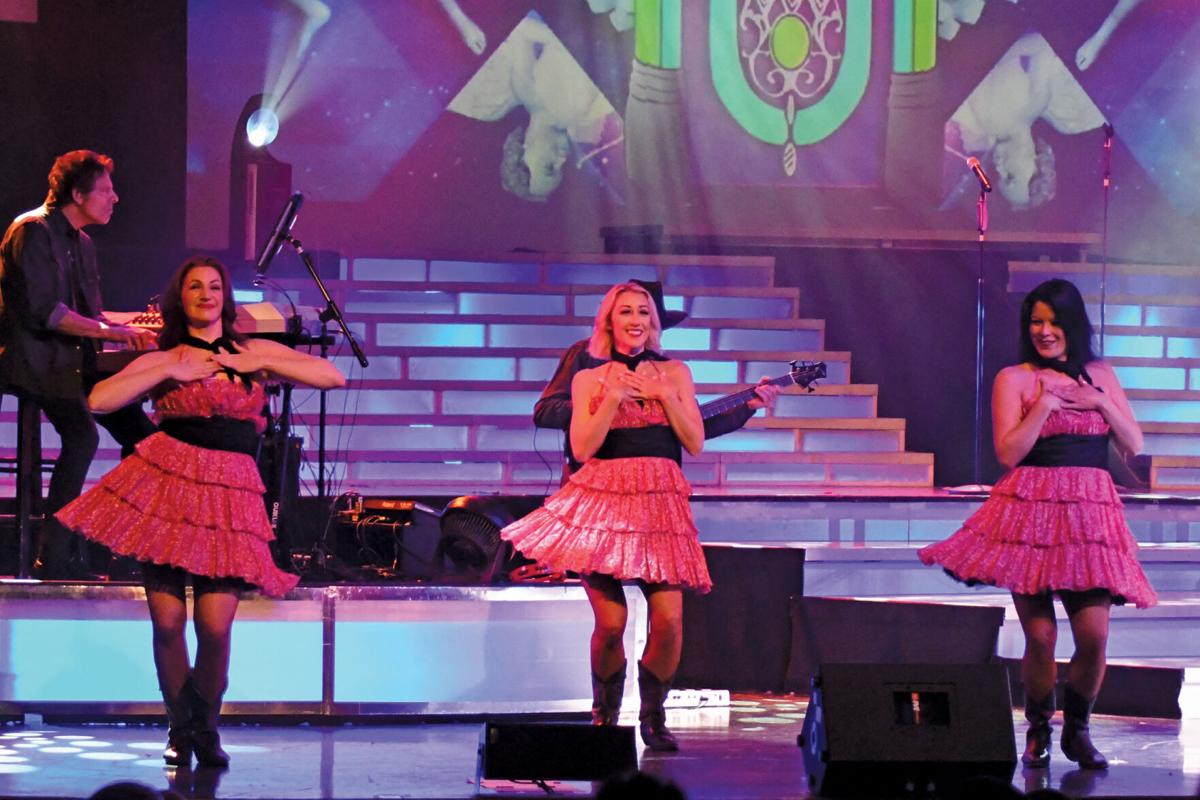 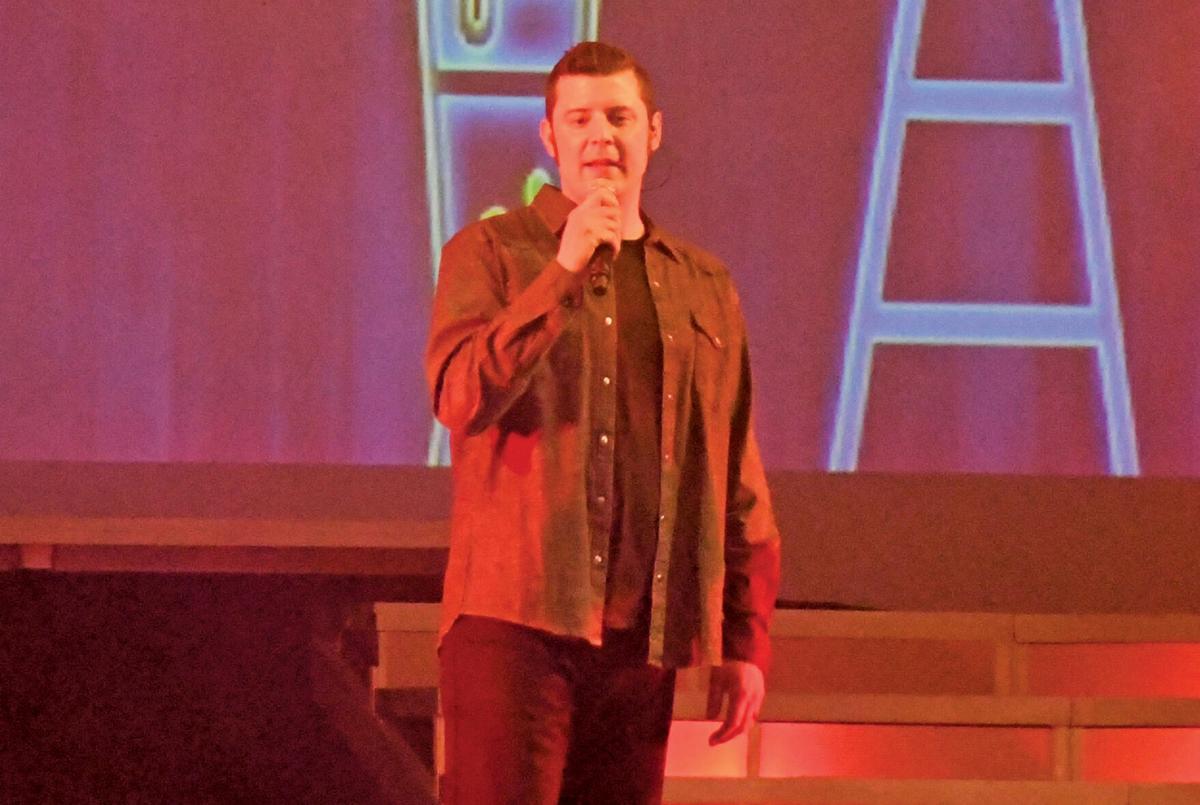 Justin Sassanella, who plays Elwood Blues in the Legends in Concert show, sings backup for Legends of Country.

Todd Bradshaw as Kenny Chesney serves as the Legends of Country Emcee and sings throughout the show.

Clint Niever as Garth Brooks brings out the guitar as he performs during the Legends of Country show.

Rick McEwen as Kenny Rogers sings “Lucille” as part of the Legends of Country show.

The all-new Legends of Country performs every Sunday afternoon at 3 p.m. at Dick Clark’s American Bandstand Theater in Branson.

Backup Singer Kenya Wilhite sings a solo to help kick-off the start of the Legends of Country show.

Legends of Country features a cameo appearance by Ryan Pelton as Elvis Presley as Melvis the Maintenance Man.

Backup Singer Kelly Church performs alongside Rick McEwen as Kenny Rogers for a special duet in the show.

Justin Sassanella, who plays Elwood Blues in the Legends in Concert show, sings backup for Legends of Country.

This month Dick Clark’s American Bandstand Theater became home to Legends of Country, an all new show featuring tributes to some of country music’s greatest artists, both past and present.

On Nov. 30, 2020, Legends in Concert in Branson announced the new spin-off show, which offers shows every Sunday at 3 p.m.

Shawn Barker, who performs as Waylon Jennings in the Legends of Country show, said this show features strictly country acts.

“It’s a little bit different format than what the regular Legends show that goes throughout the week. This one is a little bit more freeform and almost like a concert type of scenario, but it is emceed rather than just being announced and each act coming out,” said Barker. “Right now, in this run, they have Kenny Chesney who is emceeing the show and bringing out the acts and kind of giving a little bit of history between the acts.”

Barker shared since the show started on March 7, all the tribute artists in the show have been having a good time with it, including himself.

“I think everyone is really enjoying it. We’ve only had two shows so far. I know I am. I’m having a blast. I’m working through the week to get to Sunday afternoon, because we’re all having so much fun doing the show,” said Barker. “It’s really neat. It’s a little bit of a new concept and it’s turning out to be a lot of fun.”

While everyone is having fun with the new production, Barker said they’ve all put in the hard work to bring Legends of Country to life.

“I think it was like last December or November when they started saying, ‘Hey let’s do this country show.’ We got to working on it and to open it literally four months later. It’s actually a lot of work to do a full production show and it all came together really well,” said Barker. “Usually when you’re going to do a new production show, it’s a little longer notice than just a couple of months. This is a new thing for Legends in Branson and I think it’s going to be a lot of fun.”

Barker, who also plays Johnny Cash in the regular Legends in Concert show, explained how getting to do Waylon Jennings is a brand new adventure for him.

“You’ve got some characters like myself and also the Garth Brooks, we decided to take on characters we have never done before. I’ve never done Waylon. I’ve done Waylon twice in my life now and once was last Sunday and the second time was (March 14),” Barker said with a laugh. “They were asking if I thought I could do another country performer. They don’t want the same people in the weekly show as they want in the country show. They want everything to be different, so it was something completely new. I’ve been told by people that I looked like Waylon and you always kind of have that inner knowledge when you’re thinking about something and you’re like, ‘Yeah, I think I could do this.’”

In 2004, Barker auditioned for the role of Elvis Presley in the Broadway production of “Million Dollar Quartet.” Director Floyd Mutrux requested that he submit an audition for the part of Johnny Cash. Barker agreed and was instantly cast as Cash. Barker has since performed his tribute to the man in black all over the world.

Barker confirmed that after playing Cash for so long there are challenges to now playing both Cash and Jennings.

“You definitely have to separate the two and make sure you’re not bringing aspects of one into the other. Johnny Cash and Waylon are so far removed from each other, even through throughout their careers they were tightly woven. In Nashville, in the 60s they were roommates and they shared an apartment together,” said Barker. “Then they performed together on Johnny’s show, they did recordings together and they performed together in The Highwaymen. So their careers are very tightly woven together, but their styles are so completely different that it’s not too difficult to keep the two separated. You know, you don’t want to be playing your Waylon guitar and throwing it up like a gun like you do when you’re doing Johnny. So you’ve got to kind of stop yourself from doing things that kind of becomes habit.”

Joining the cast of tribute artists on stage are some of Branson’s most talents musicians, singers and dancers. The Legends of Country Band features Band Director Kevin Allen on guitar, Brian Zerbe on bass, Eddie Howard on drums and Peter Affa on keyboard.

Legends of Country is also made possible due to the talents of Skip Young on lights, Austin Shields on sound, Production Manager Robb Horton and Stage Manager Bradley Hanebrink.

Though they’ve only had a couple of performances so far, Barker said he believes the show has been well received by the audience.

“The crowd’s been really good and really receptive. I think the way that the show is formatted is a little bit more open and free. During my set, the musicians like the guitar player and bass player, they’re not planted in their spot. They’re up, part of the show and moving around,” said Barker. “It’s a little bit more interactive than what the normal Legends show is and think that’s carrying over to the audience and they’re feeling some of that excitement. We seem to be getting a really good response from the audience on it. I think people are enjoying it a lot.”

Barker said through the rest of the season folks should be on the look out as new country artists are introduced to the show schedule. He added that this summer he may get the chance to bring Johnny Cash to the Legends of Country show.

“There’s a lot of great country shows in town, but this is going to be the only one that you can actually come and see the country artist being portrayed by tribute acts. There’s no other country show in town that does that,” said Barker. “You can go hear Waylon, but you can’t see Waylon unless you come to Legends of Country.”

Barker shared tickets for the both of the Legends shows at Dick Clark’s American Bandstand Theater are cross redeemable, meaning a ticket holder for Legends of Country can get a discount on their ticket to go see Legends in Concert and vice versa.