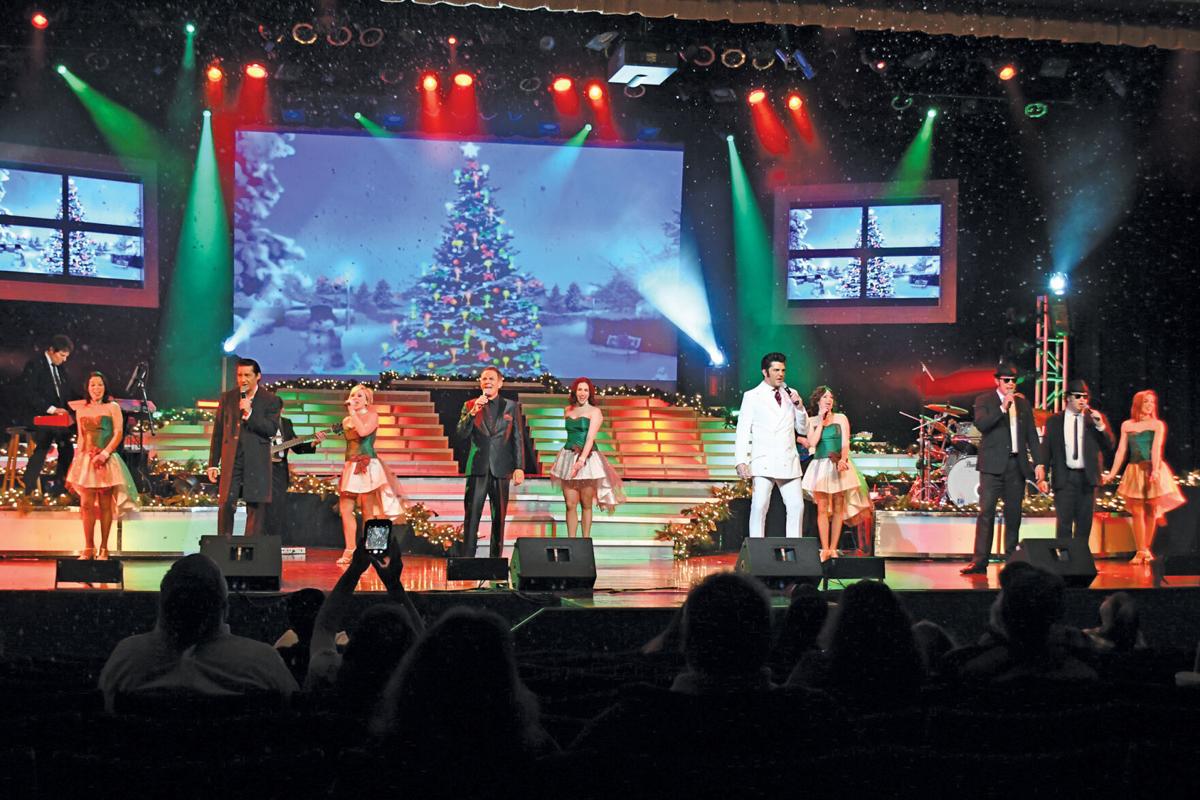 During the finale of the Legends in Concert Christmas show, all of the legends singers and dancers re-join the band on stage to sing some final Christmas songs together. 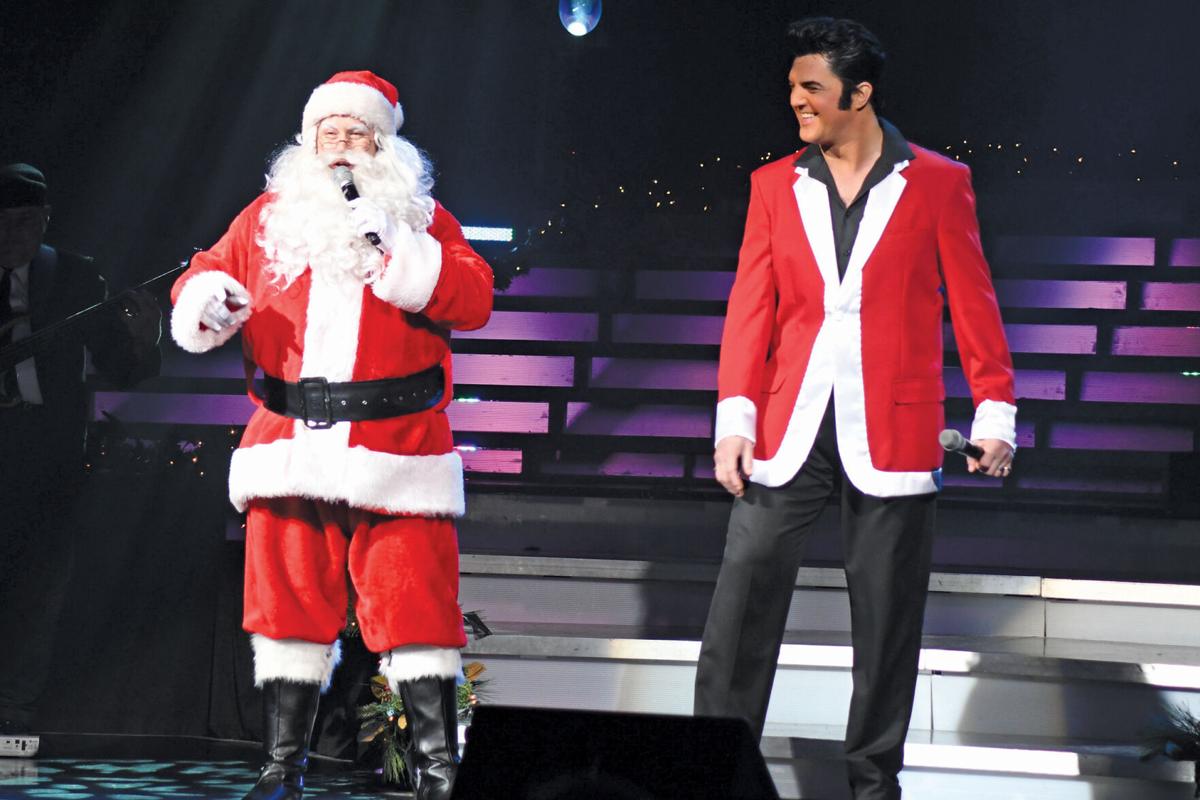 Santa Claus and Elvis “Ryan Pelton” Presley share a moment on stage during the beginning of the show. 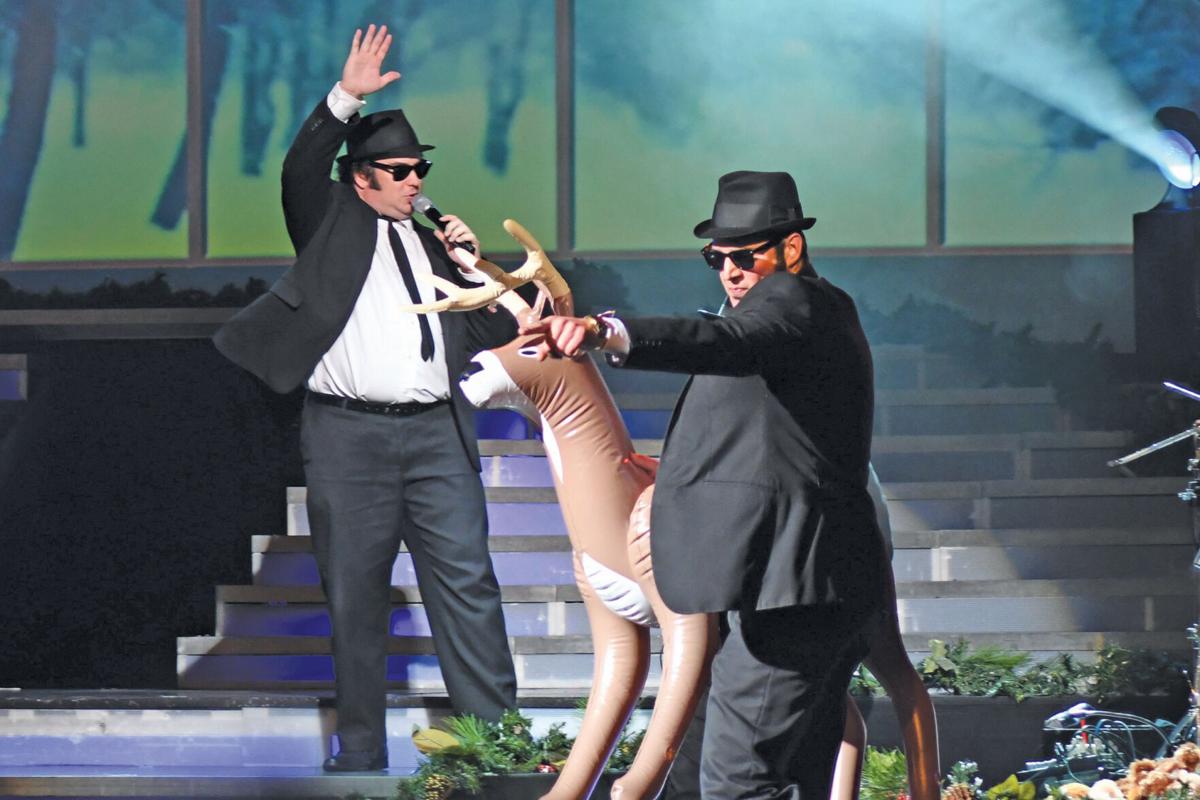 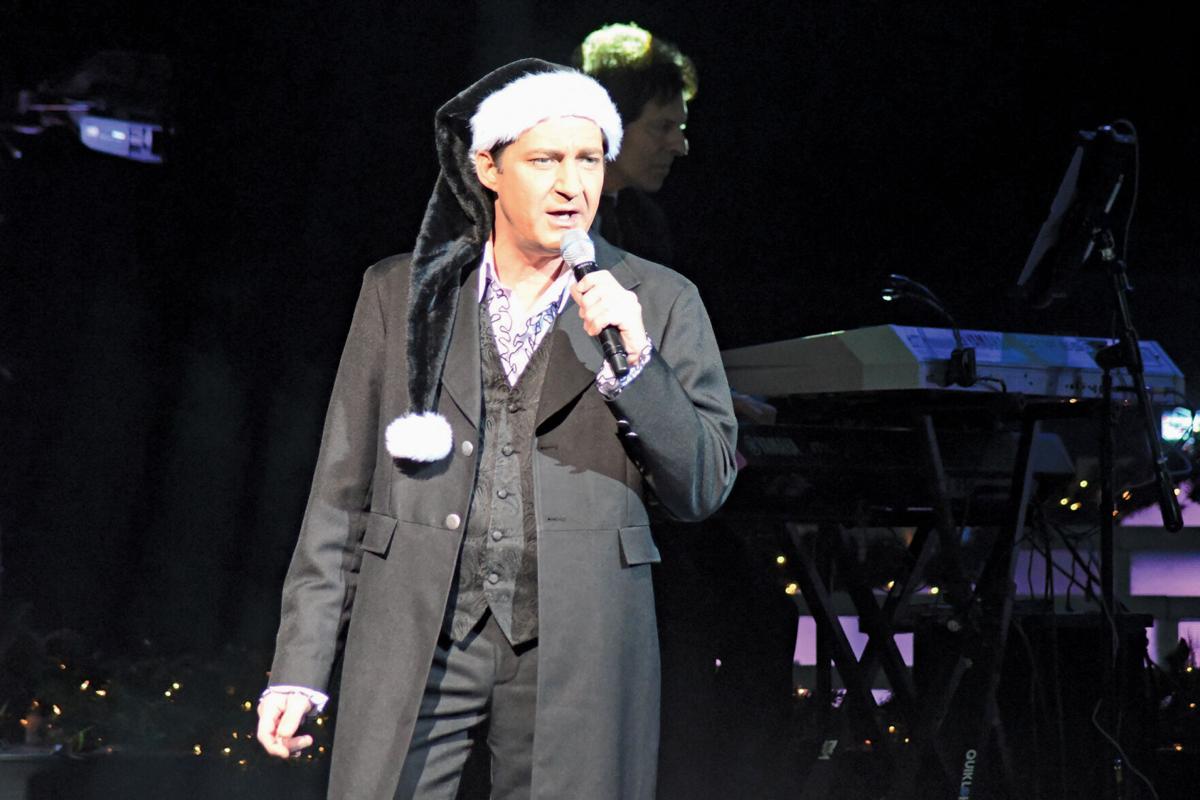 Dawning a Santa hat that only “The Man in Black” could wear, Johnny “Shawn Barker” Cash sings about Christmas. 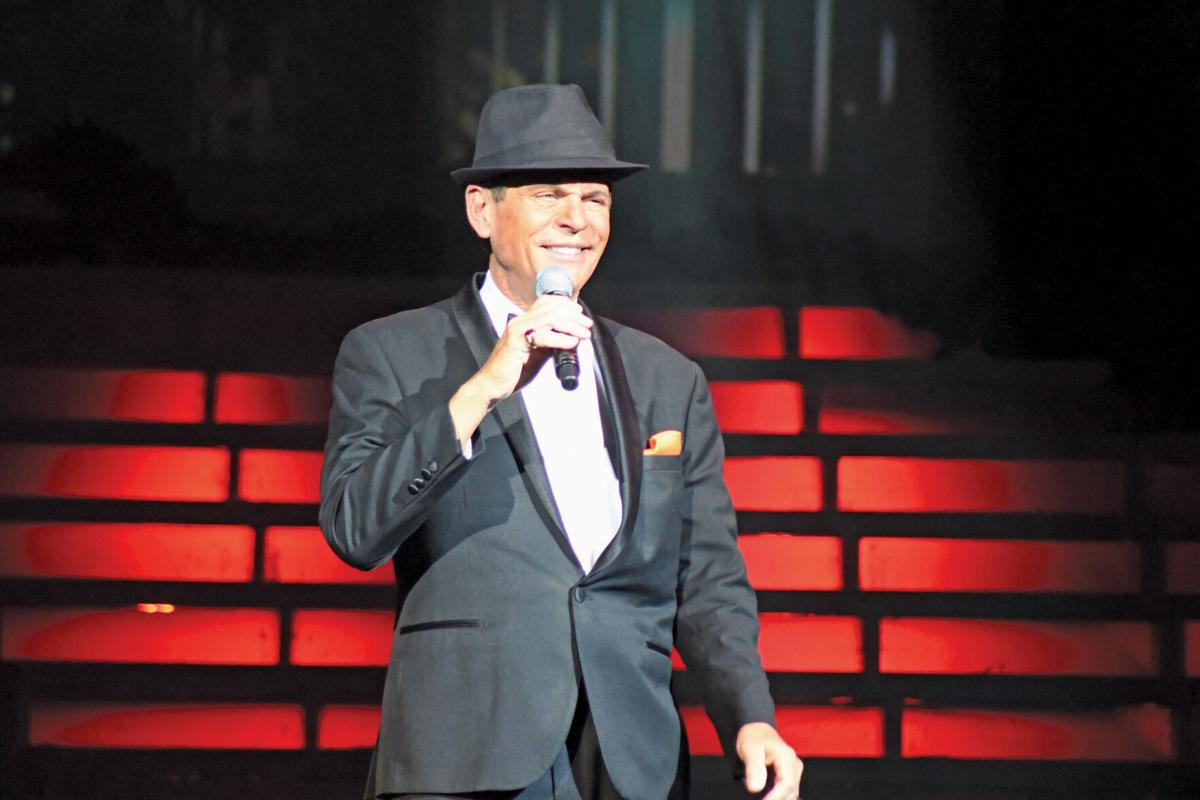 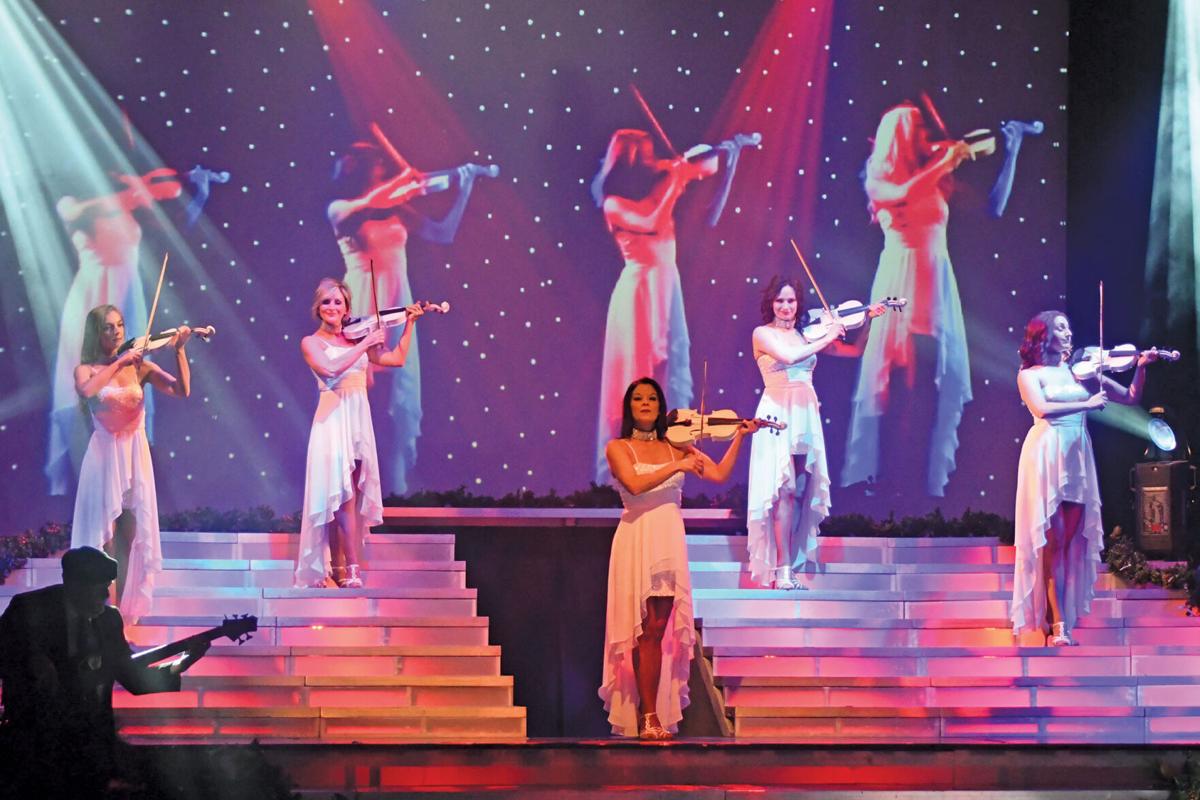 During the finale of the Legends in Concert Christmas show, all of the legends singers and dancers re-join the band on stage to sing some final Christmas songs together.

Santa Claus and Elvis “Ryan Pelton” Presley share a moment on stage during the beginning of the show.

Dawning a Santa hat that only “The Man in Black” could wear, Johnny “Shawn Barker” Cash sings about Christmas.

Anyone looking to enjoy the gift of spending the holidays with Elvis Presley, Frank Sinatra or even Johnny Cash, Dick Clark’s American Bandstand Theater has the Christmas show for you.

“We love Christmas. We love it. However, we know for a lot of our guests, it may be the only time of the year that they come to see the show, so it’s not 100% Christmas. Each of our acts will do several of the legends top songs. Iconic songs that everyone knows and can sing along to as well as a Christmas song during their 15 to 20 minute set in the show. However, we start the entire show with an opening Christmas number that’s happy, carefree, joyful, and it puts everybody right in just a great mood,” said Heppner. “Elvis actually opens the show and closes the show. In the opening of the show Elvis, starts by coming out and sort of sets the tone for the Christmas show. Elvis had great Christmas songs.”

The current Legends in Concert line-up features Ryan Pelton as Elvis Presley, Robbie Howard as Frank Sinatra, Shawn Barker as Johnny Cash and Justin Sassanella and Clint Nievar as The Blues Brothers. Heppner shared that whether one of the tribute artists are singing one of their own classics or a Christmas classic, it’s sure to transport audiences back to a special moment in time.

“We try to find the most iconic, well known, loved songs of that particular entertainer. Because everybody wants to know. They want to remember. They want to think back, ‘Where was I when I heard that?’ This guy looks and sounds just like him. Then for the Christmas songs, it’s pretty much the same way. You just heard Frank Sinatra do ‘It’s a Marshmallow World.’ I grew up listening to my parents Christmas albums with Dean Martin, Frank Sinatra, ‘It’s a Marshmallow World’ I always heard that song,” said Heppner. “It absolutely just brings back precious memories and you may have forgotten them and then all of the sudden you’re remembering that time or even a smell. It’s just really unique how that works.”

At the end of the show, the stage welcomes back all of the legends to perform a Christmas finale together.

“We end our show with a beautiful finale that celebrates the true meaning of Christmas. It’s a beautiful finale. It’s fun. It snows in the theatre during the show,” Heppner said. “You’ll feel some snowflakes and see some snowflakes coming down. We have Santa, but I think truly you just feel the joy of the season when you’re here in our theatre. That’s our goal anyway and again to have the reminder of why we celebrate Christmas.”

Legends in Concert also features the talents of some of Branson’s best musicians, singers and dancers. The Legends in Concert band includes Band Director Kevin Allen on guitar, Brian Zerbe on bass, Eddie Howard on drums and Peter Affa on keyboard.

Kenya Wilhite and Kelly Church also take the stage alongside all of the legends and are joined by the legends dancers including Dance Captain Cindy Dardas, Melody Boyens and Sarah Garon.

After a short Christmas break, Heppner said Legends in Concert returns on Dec. 26 with their regular show, which will run through Jan. 2, 2021. Heppner added that folks are not going to want to miss out on the 2020 New Year’s Eve show at Dick Clark’s, which features Legends in Concert and a special guest.

“We have a great New Year’s Eve show. So all of our acts will be performing in that. Six, the show, will be making a special appearance that night. So that’s always fun. Very high energy night. We have several ticket options available for that night, but regardless, everybody that comes for that is going to get some sort of meal, some sort of party favors and it just kind of builds from there on what you want. It’s a lot of fun. It’s a safe, fun way to spend New Year’s Eve.”

“We’re getting ready for 2021. Our schedule is out and published. We’re ready to bring in a whole new year. I think everyone’s ready for that. We’re up to the challenge,” said Heppner. “We have some exciting news … of something new that we’re going to be bringing to the theatre next year. So we’re very excited about that.”

To say thank you to locals for their support in 2020, Heppner said Dick Clark’s American Bandstand Theater is hosting its annual Area Appreciation and Food Drive from Dec. 1 to Dec. 22.

“We’re in a trying time right now, but every person that walks through that door, we are so grateful for, and we just want to make it worth their effort. More than worth their effort,” said Heppner. “We want them to think when they leave here, ‘Man I’m glad I got out of the house and went to that.’”

The daily producing of the Legends in Concert show is made possible by the talented crew including Skip Young on lights, Austin Shields on sound, Stage Manager Bradley Hanebrink and Production Manager Robb Horton.