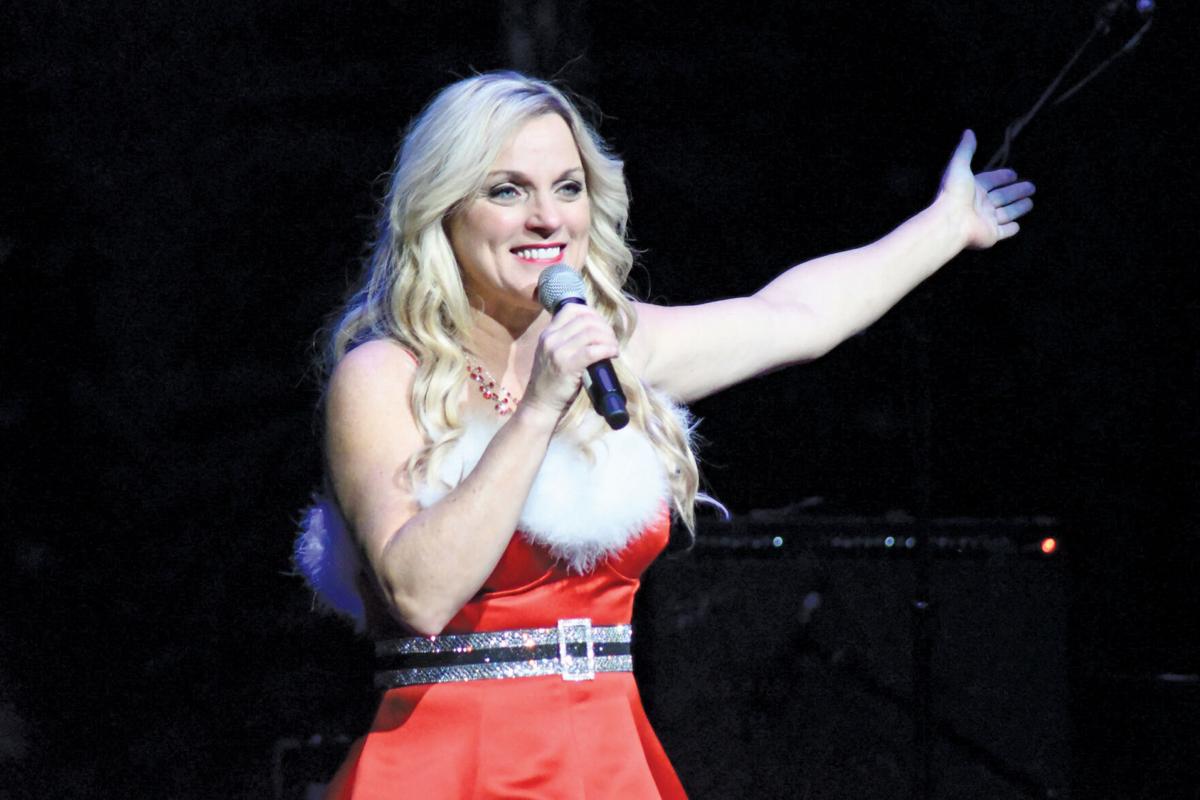 Since the beginning of November, Rhonda Vincent, aka the Queen of Bluegrass, has been performing her show Christmas in Branson at the Andy Williams Theatre. 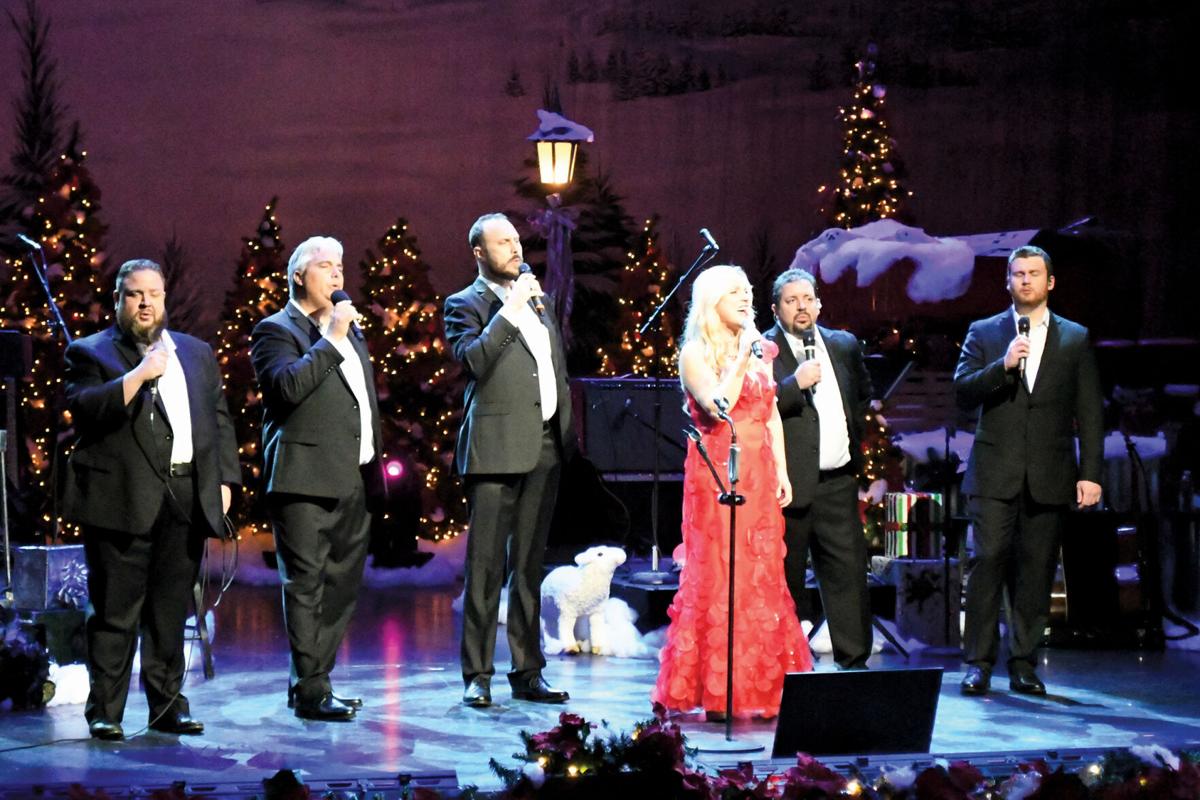 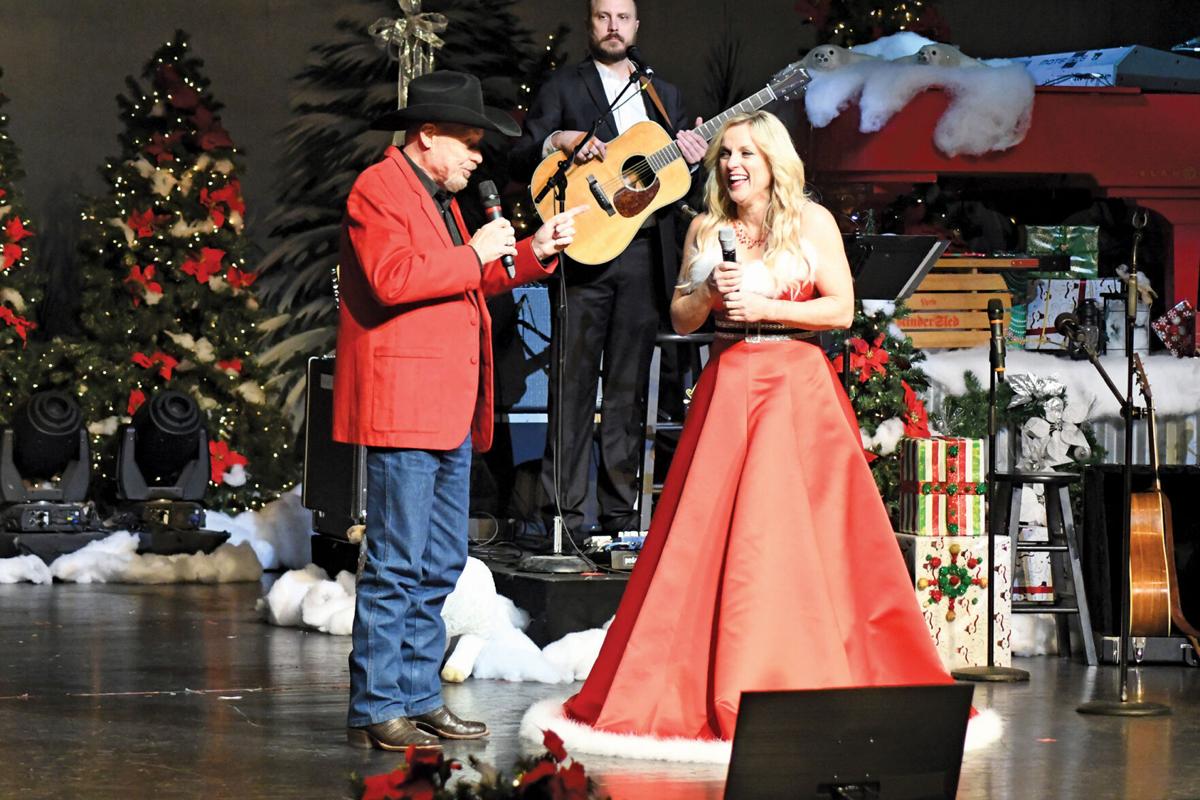 Moe Bandy and Rhonda Vincent share some stage time during the show and sing a few duets together. 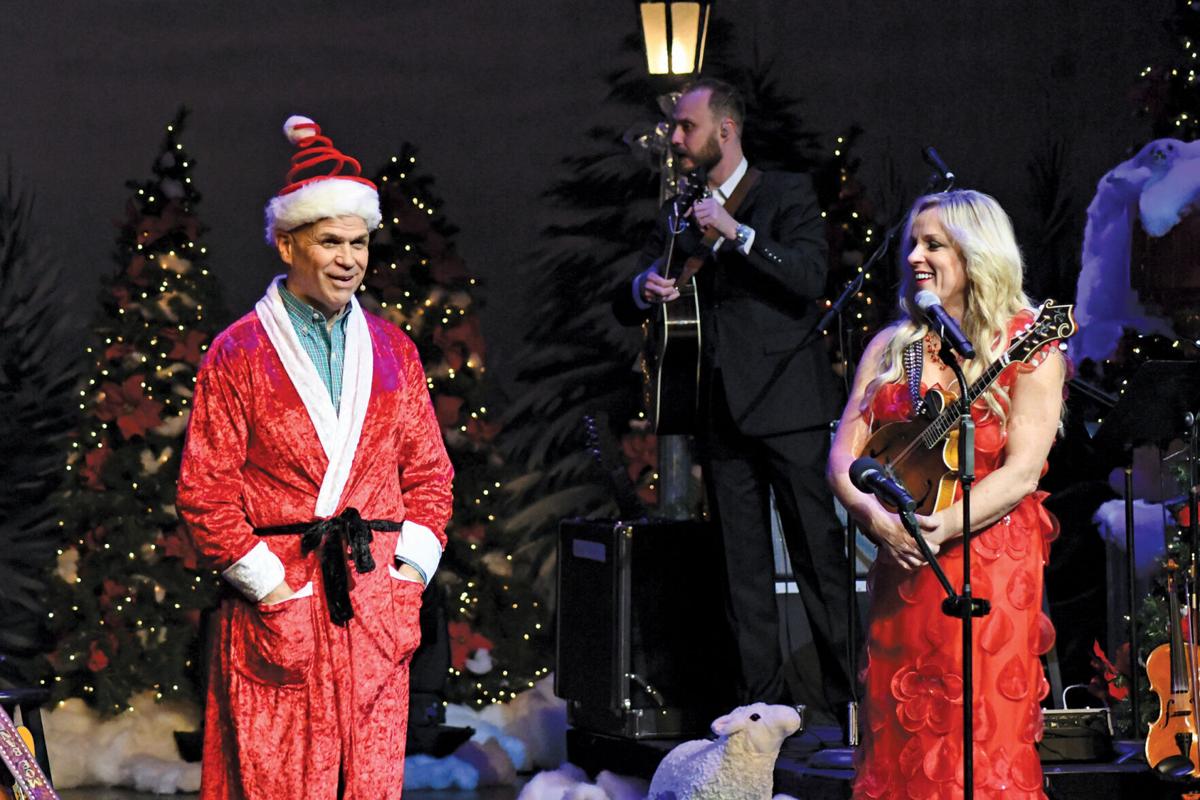 Branson Comedian Jarrett Dougherty joins Rhonda Vincent on stage for a little comedy during the show. 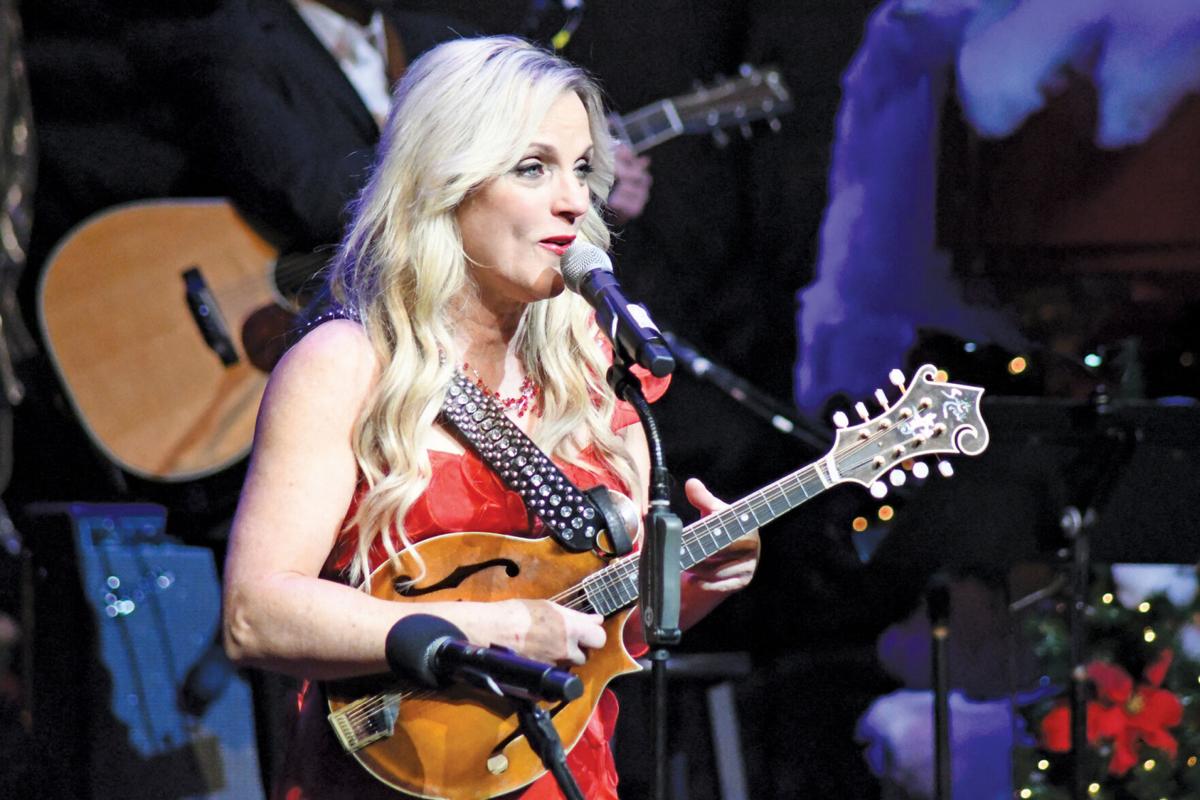 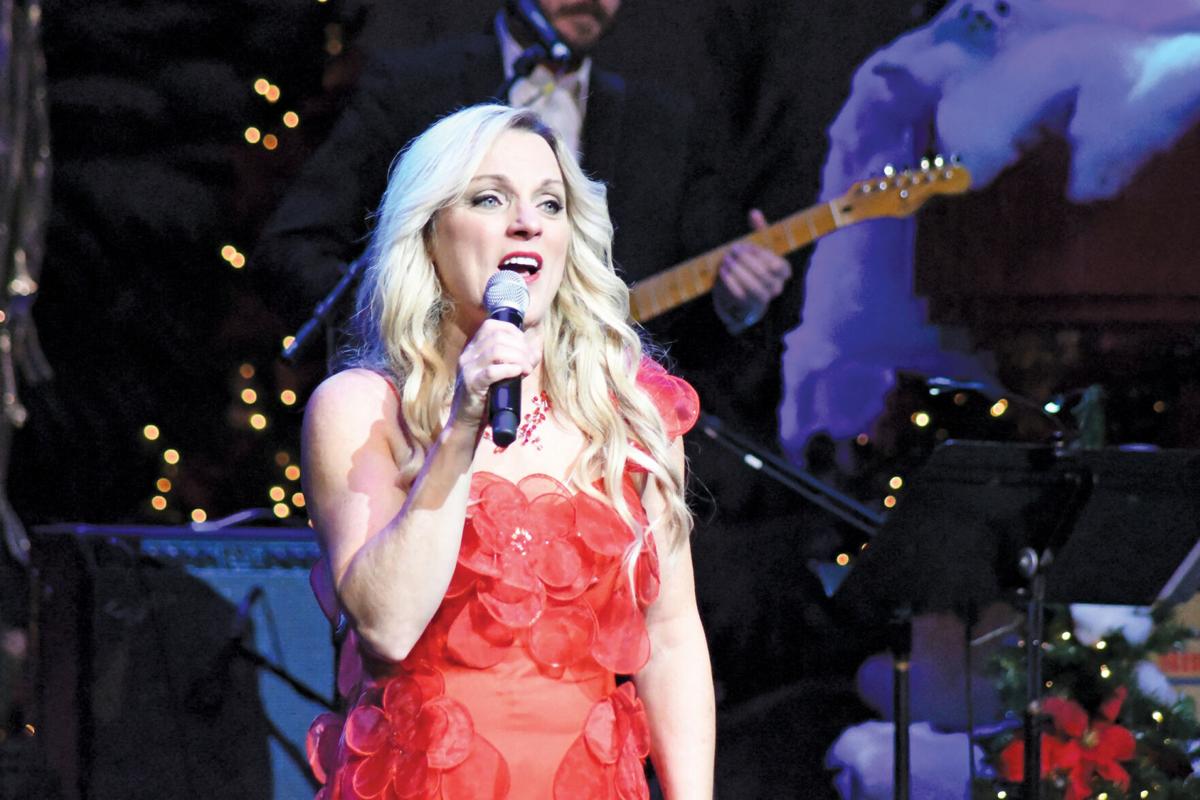 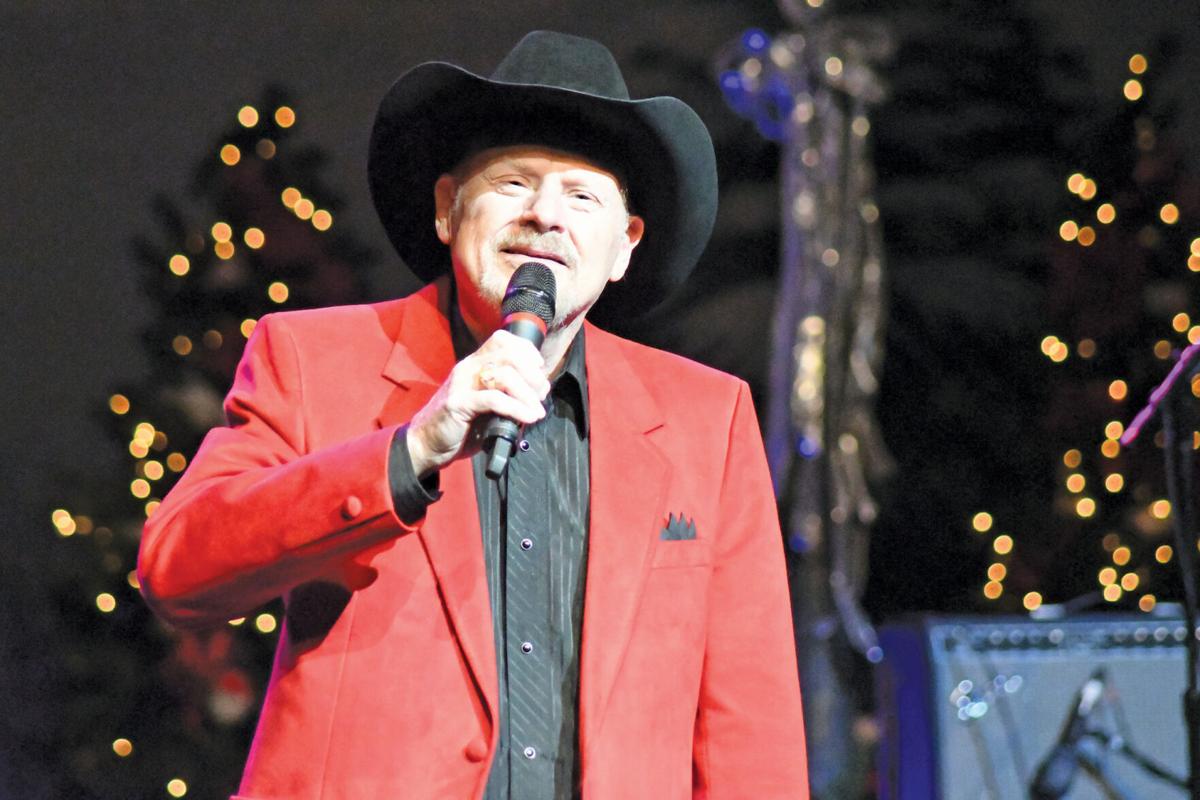 While in Branson, Rhonda Vincent has welcomed several special guests including the legendary Moe Bandy.

Since the beginning of November, Rhonda Vincent, aka the Queen of Bluegrass, has been performing her show Christmas in Branson at the Andy Williams Theatre.

Moe Bandy and Rhonda Vincent share some stage time during the show and sing a few duets together.

Branson Comedian Jarrett Dougherty joins Rhonda Vincent on stage for a little comedy during the show.

While in Branson, Rhonda Vincent has welcomed several special guests including the legendary Moe Bandy.

The Queen of Bluegrass is in Branson.

Since the beginning of November, Rhonda Vincent has called the Andy Williams Performing Arts Center and Theatre home as she’s performed her show Christmas in Branson. While Sunday, Dec. 20 will be her final show of 2020 at the Branson theatre, there are still several opportunities left to catch Vincent’s show while she’s still in town.

Back in September, Vincent announced she would be coming to spend the holidays with the people of Branson. After being on the road and touring in January, February and March of this year, Vincent and her band The Rage, suddenly found themselves back at home and canceling tour dates in 2020 when the pandemic struck. During the summer, Vincent said she came to Branson to visit her brother who was vacationing and was surprised at what she found.

“This place was packed. There’s people everywhere. I came back in September and was with the Larry’s Country Diner over at Clay Cooper’s Theatre and they had sold out shows,” said Vincent. “I said, ‘Man, this is the place to be.’”

Vincent, a life-long resident of Missouri, said she then began looking for a place in Branson she could bring her band to perform.

“I’m thinking, ‘Okay, if there’s people here, this is where we need to perform.’So I started talking to different places and saying, ‘Hey would you (be interested)’ and trying to find a theatre,” said Vincent. “I happened to stop by PFI (Western Wear in Springfield) and BootDaddy was the one talking about the different theatres and helped me to find the Andy Williams Theatre and they had a vacancy here. From there managed to make a deal and now here we are. I’ve never done this before, I never would have thought I would be leasing a theatre in Branson, Missouri. It was beyond me.”

Right away, Vincent said she began to feel the warmth and welcomeness of the area.

“I was really impressed how I was welcomed to the community. Wayne Massengale and his family, Melody Hart and Garrett and Dillon, the first response I received was from Wayne and he said, ‘I want to invite you to come to church with us,’” said Vincent. “I have connected with so many people and gone to shows. I went to Choices the other night. I love the atmosphere. I grew up here with my family playing at Silver Dollar City. So I’m not a stranger to the area. I’ve never been here for this long though.”

When Vincent began putting the pieces together for her Branson show, she knew she wanted it to be different.

“We’re doing a different show every day. I purposely said I’m not going to start with the same song. We never start with the same groupings of the same songs,” Vincent said. “I think it keeps us on our toes. You don’t get stagnant, it doesn’t become mundane, because it’s different everyday. Aaron doesn’t know what we’re going to start the next show with until right before we walk out there. It’s not like it’s a set list that we’ve prepared. I try to give them a few, but the second set is usually requests.”

While the show is different every day, there are certain elements of the show that are a part of every show including a living portrayal of the Nativity Scene and a visit from Santa Claus. Vincent added that her show also always includes her Christmas cover of the “12 Days of Christmas,” which featured a number of celebrity music artists when it was initially recorded.

“My dream has always been to have all these artists on stage with me. So maybe if you come to Branson, that dream will come true,” said Vincent. “Twelve is the Oak Ridge Boys, 11 is Willie Nelson singing 11 pipers piping, 10 is Charlie Daniels, nine is Bill Anderson, eight is Dolly Parton … Dolly sings eight maid a milking, seven was Ronnie Milsap, six was Gene Watson, (four) was Larry Gatlin … three French hens are Pam Tillis, Lorrie Morgan and Jeannie Seely and then EmiSunshine sings two turtle doves. So if you come to Branson you might get to see some of those people, I’ll just say that.”

For the celebrity cover, Vincent begins the song by singing a partridge in a pear tree and then five golden rings is a combination of everyone.

While performing in Branson Vincent knew she didn’t want to have the stage all to herself, so she decided to bring along some of her friends. Since her first show at the start of November, Vincent has already welcomed the talents of Jeannie Seely, Moe Bandy, John Berry, T Graham Brown and Mark Wills to join her on select dates.

“We wanted to reach out to our friends and help our friends too. Like Mark (Wills) said he hadn’t done a show all year. Then John Berry had never performed in Branson ever. It was his first appearance and he hadn’t done a show all year. They were jumping at the chance. Almost everyone of these artists were like ‘Yes. How many days can you put me on here.’ So then we started in, because it was a matter of how are we going to shuffle everyone and then some of them had a specific schedule and can only do it here. Anyway, it worked out. Calling friends and people who were on board that we liked. People that we love to work with and are very talented too.”

Also joining Vincent on the Andy Williams stage is her band The Rage, which features Josh Williams on guitar, Mickey Harris on bass, Hunter Berry on fiddle, Jeff Partin on dobro and Aaron McDaris on banjo. Vincent has also welcomed a few special guest musicians as well, including Josh Shilling on piano, Tyler Hall on steel guitar and Jarrett Dougherty on drums.

With the help of Dougherty, who is also one of Branson’s best comedians, Vincent said she was able to combine a little comedy with a little bluegrass.

“Well we’re in Branson so everybody has a comedian pretty much. That’s something I am not. I tell a few jokes occasionally, but Jarrett brings this special element,” said Vincent. “He’s local No. 1, but he is so funny and there’s a comradery that he brings on stage and off stage. Behind the scenes, the guy doesn’t have an off switch. So where ever he is and he’s so positive and he’s so funny and he’s so fun.”

Now that she’s enjoyed a near two month run on a Branson stage, Vincent addressed whether or not she’ll be back in 2021.

“If the right opportunity comes along, I guess I would definitely consider that. I have been approached by some other theatre’s,” said Vincent. “Bring on the opportunities and let’s talk about it. I think that would be great. I’m enjoying it. I love it. We’ve never got to sit in the same place.”

On Feb. 28, 2020, Vincent was invited by long-time Grand Ole Opry member Jeannie Seely to become a member of the opry. Now nearly 10 months later, the longest amount of time ever for someone being invited and then being inducted into the Grand Ole Opry, Vincent finally knows her induction date.

“Just this past Saturday night, it was the 75th Anniversary of celebrating bluegrass music at the opry,” Vincent said. “Mark Wills was here, a Grand Ole Opry member, and he announced on the stage here that night that I would be inducted on Feb. 6 of 2021.”

Remaining special guests set to join Vincent for her final 2020 Branson shows include Wilson Fairchild, Moe Bandy and Mo Pitney. Vincent is hosting a show everyday at 7:30 p.m. now through her final show on Sunday, Dec. 20.