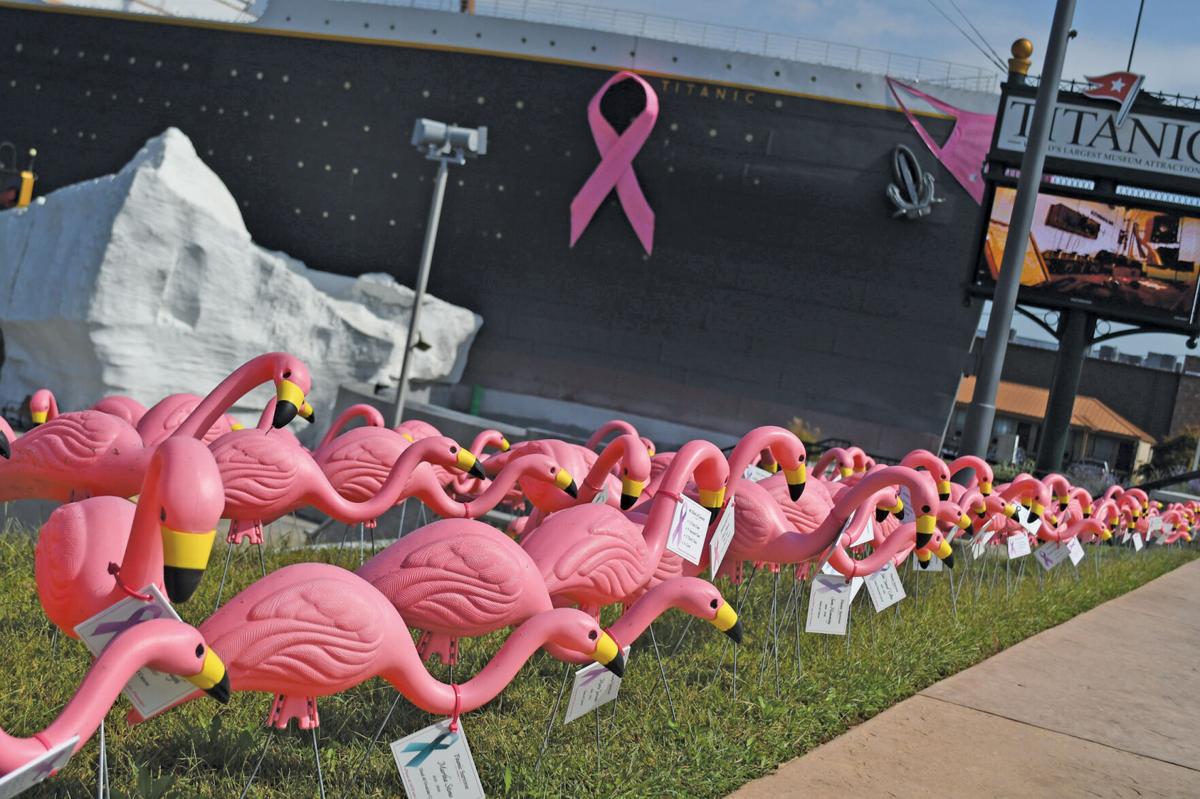 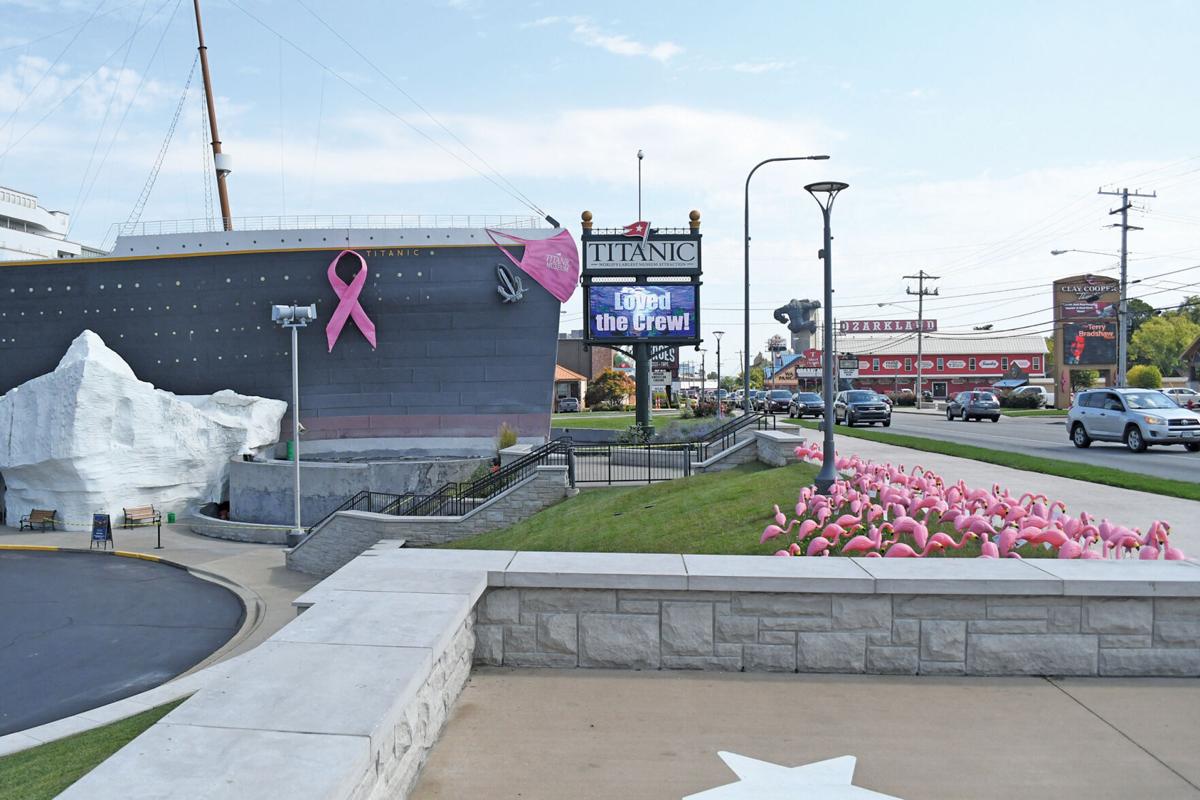 Titanic Branson guests and those driving by will have the ability to see the giant ribbon, mask and flamingos. 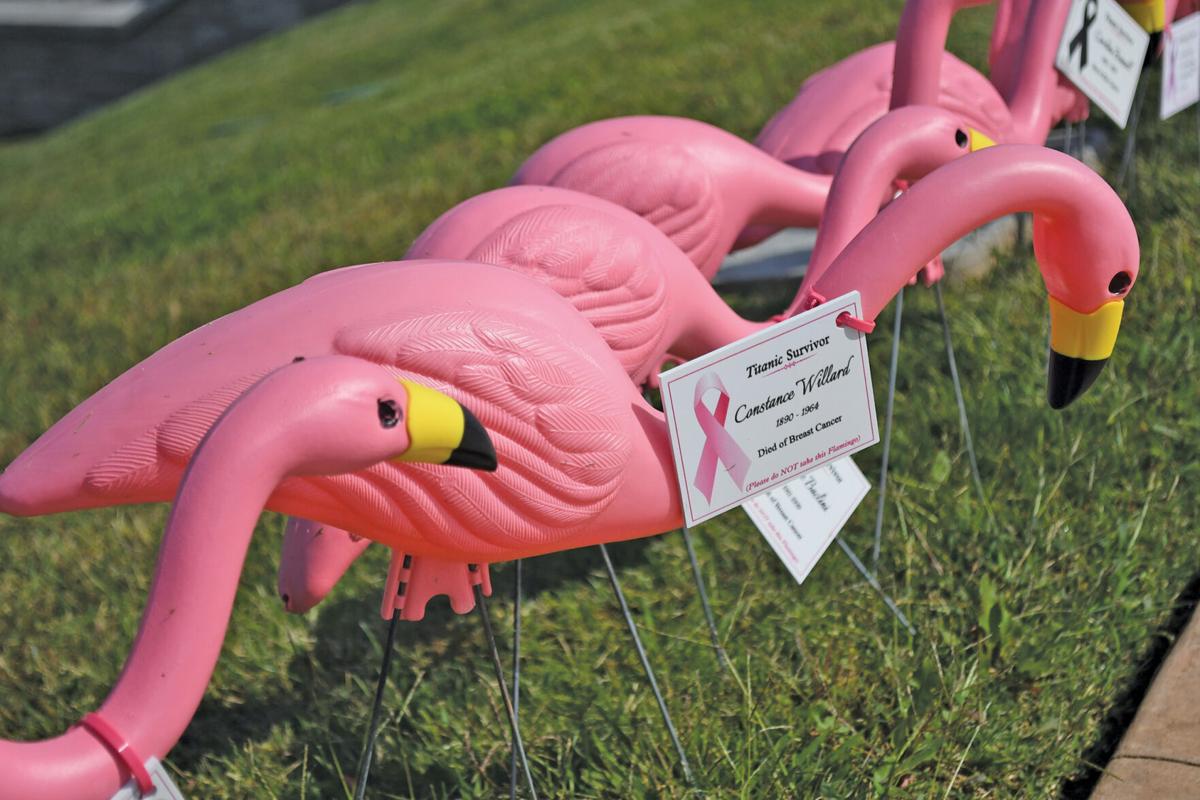 Each of the 46 pink flamingos include a plaque, which reads the name of a Titanic survivor who died of cancer.

Titanic Branson guests and those driving by will have the ability to see the giant ribbon, mask and flamingos.

Each of the 46 pink flamingos include a plaque, which reads the name of a Titanic survivor who died of cancer.

The Titanic Museum Attraction in Branson is once again calling attention to Breast Cancer Awareness Month with the return of their giant pink ribbon and other pink pieces this month.

For the seventh straight year, the Titanic Branson ship and docking area are illuminated with an all-pink makeover. As they pull into the parking lot, guests of the museum attraction will be greeted by a 16 foot pink bow displayed on the side of the museum. A large pink face mask on the bow of the ship and 46 pink flamingos in the yard in front of the ship have also recently been installed and can be viewed by attendees.

The Titanic’s Breast Cancer Awareness Campaign has now become a tradition each year for the museum.

“Everyday our goal is to create a connection between the Titanic passengers and the world today,” Titanic Museum Attractions President and Co-Owner Mary Kellogg said. “Seven years ago I wondered how many passengers survived, but later died of cancer. We were surprised to fine 46 passengers and crew. We always learn from our past and want to share these stories today.”

Kellogg added she hopes people who visit the museum this month will also walk away remembering the names of those lost to cancer and a reminder to create breast cancer awareness.

The nearly four dozen pink flamingos standing in front of the museum do so in honor of the 46 passengers who survived the Titanic, but were claimed by cancer. Kellogg said of those 46 who lost their battle with cancer, seven of them were specifically killed by breast cancer.

“We began to think how we could pay tribute to these passengers and crew with a symbol and all of the ladies agreed—the pink flamingo—it represents power with grace and a symbol for recognizing the joy and beauty in life,” Kellogg said.

Although rare, men get breast cancer too. In 2021, an estimated 2,650 men will be diagnosed with breast cancer this year in the U.S. and approximately 530 will die. There are also more than 3.8 million breast cancer survivors in the United States, according to the NBCF.

Kellogg also shared a statement with the Branson Tri-Lakes News, which was submitted to the Titanic Branson by Kat Brown, who expressed her appreciation for the pink atmosphere and the impact it had on her during a visit to the museum.

“My husband and I went on our honeymoon to Branson. He had just been diagnosed with lung cancer. As he rested in the hotel room I visited Titanic by myself (he was unable to walk) and sat outside among the flamingos and had a good cry after I went through the museum. As sad as it was, it has been a lasting memory for me. He passed away a few weeks later. For the anniversary of us being together for 10 years I came back to Branson and visited Titanic again. I sat in the same spot and had another good cry.” —Kat Brown

For additional information about the Titanic Branson and their Breast Cancer Awareness Campaign visit titanicbranson.com.