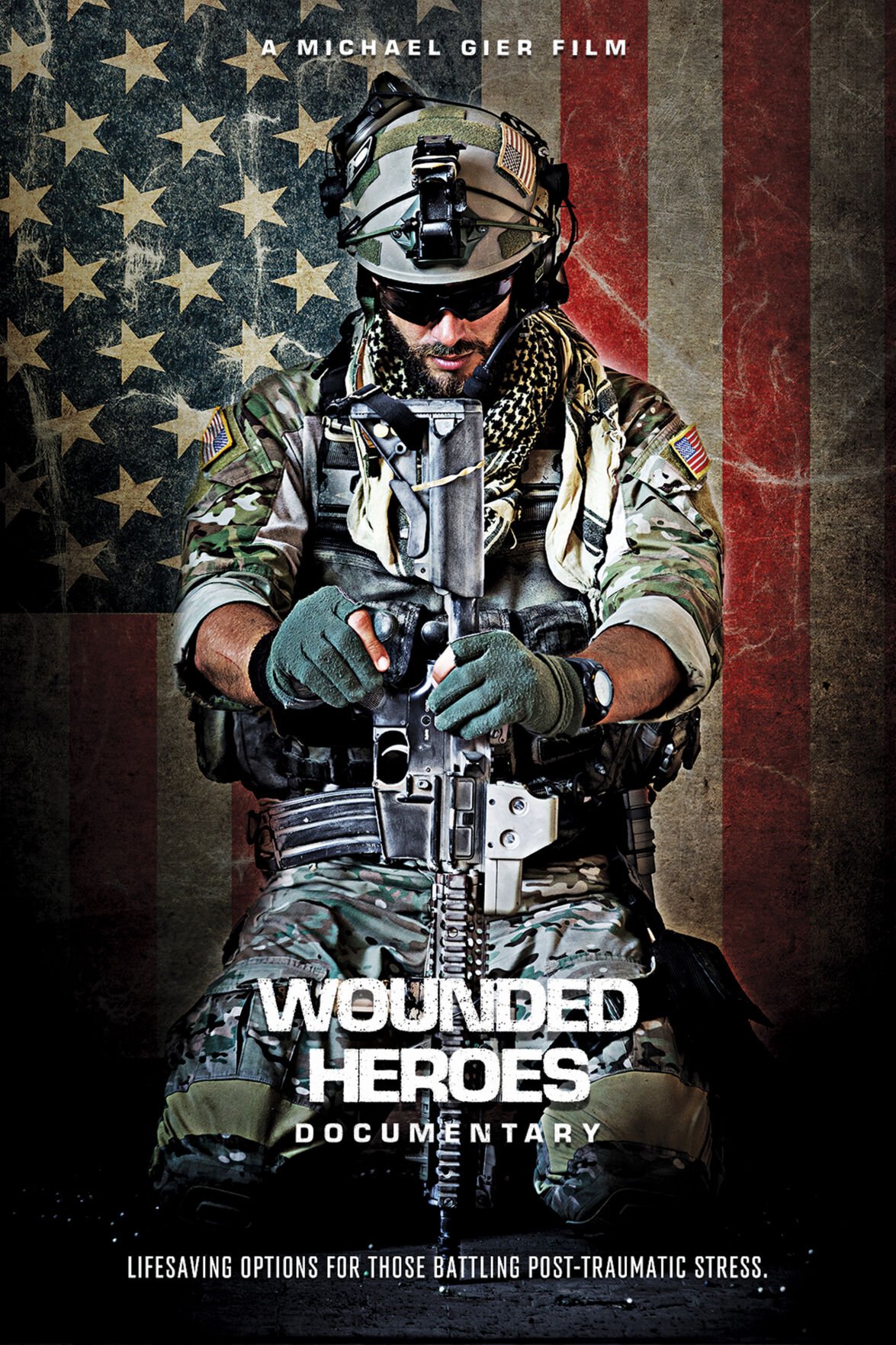 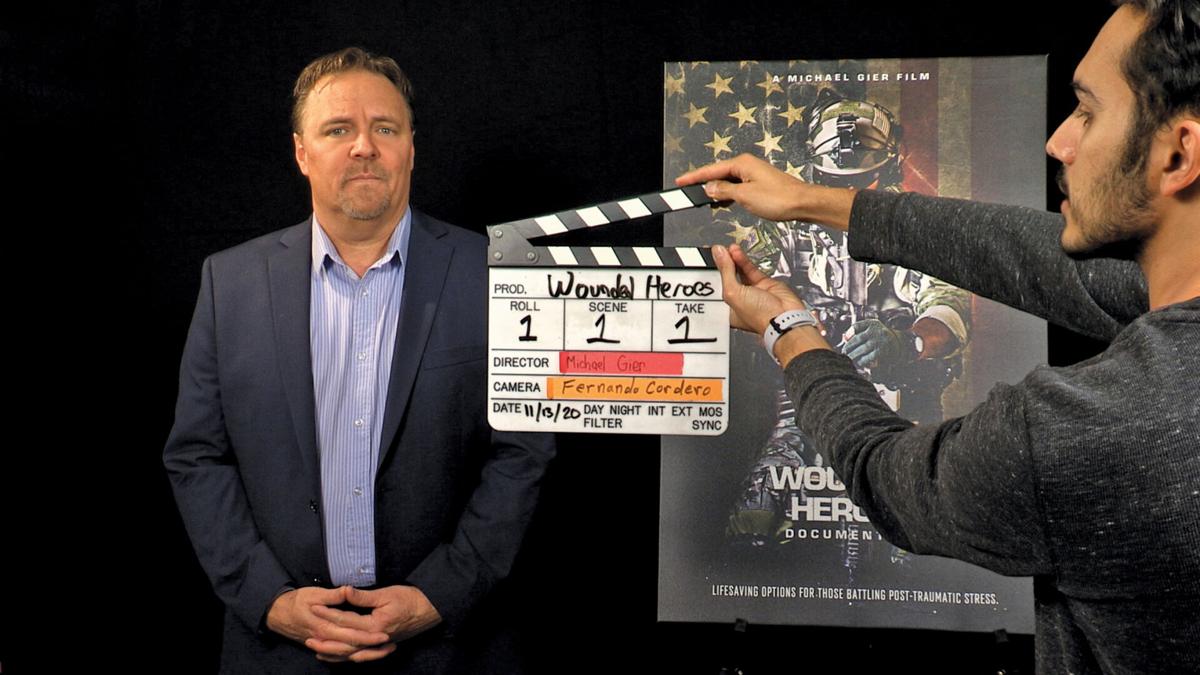 A former Branson entertainer has released a new documentary, which shines a light on new alternative non-drug treatments and programs to help those battling post traumatic stress.

The ‘Wounded Heroes Documentary’ is directed by California filmmaker Michael Gier, who also performed in Branson in the 90s. The original intent for Wounded Heroes was to actually be a theatrical film with a storyline about PTS. However, something changed for Gier when he began doing research on PTS.

“I was interviewing veterans just to learn more about post traumatic stress before we got into production. I met a guy in San Diego named Carl and he was a medic. He was in his 20s and he was in bad shape. I could tell when I was doing the interview with him on camera. He told me he was on 16 different prescription medications for his post traumatic stress, down from 18, and that was shocking to me,” said Gier. “The worst part was he says it didn’t really help, it pushed back some of the symptoms, but it was just more a band-aid, it didn’t actually solve the problems of post traumatic stress.”

Following his interview with Carl, Gier said he made the decision to place his feature film on hold and create the documentary instead.

“I thought there has to be better options than just a lot of medications that don’t actually solve the problem. There has to be treatments and programs out there that will give people their lives back, get them hopefully off of the medication and help them resolve their post traumatic stress once and for all,” said Gier. “So that sent me on a three year journey for what we still called ‘Wounded Heroes,’ but the documentary. I’ve been all over the country and we have found great treatments and programs that give people their lives back.”

The documentary, features interviews with multiple veterans battling PTS, many of whom Gier said were hopeless and suicidal.

“They thought they’d have to live a miserable life the rest of their lives, but they found something,” said Gier. “They found something that helped them with their post traumatic stress, got them off the drugs, gave them their lives back and now they’re living a very good, very fulfilling life that’s worth living.”

Gier shared that the interview process was an emotional one where many tears were shed.

“Hopeless doesn’t even describe it. What they were feeling when they were down and suicidal or trying to commit suicide, the word is so much bigger and stronger than hopeless. I can’t even think of a word. They just didn’t want to live. They wanted the pain to stop. They weren’t sleeping at night. They were having problems with their relationships or they couldn’t keep a job,” said Gier. “Just all these things they experienced on a daily basis. Then not to get sleep at night and to then go through it again the next day and that just combines day after day. It’s really amazing what they have to live through and then for them to find a solution that makes all of that go away, those tears were tears of joy.”

“Many veterans get irritated when they hear people calling it PTSD, because they’re like, ‘We’re not disordered.’ I actually had a veteran yell at me when I was doing a TV interview in San Diego … I got this email from this guy going, ‘I’m not disordered. Quit calling it PTSD,’” said Gier. “I did some research and I found out there’s a whole movement, I guess you could call it, with professionals and doctors, legitimate people saying it’s not a disorder, it’s an injury. Post traumatic stress, it’s a very normal reaction to a traumatic event, so it’s not a disorder. That’s why we chose to take the ‘D’ off.”

Before he began doing research for the film, Gier said he assumed PTS was only something people in the military dealt with. Upon learning that was not the case, Gier said he wanted to feature others, including first responders, who were battling PTS in his film.

Prior to becoming a film maker in 2009, Gier made a living as a singer, dancer and actor, which is what led him to Branson in the mid-90s.

“I went and auditioned for ‘The Lawrence Welk Show,’ which was at a brand new theatre that was opening in Branson, Missouri. I wasn’t really sure what ‘The Lawrence Welk Show’ was, but I knew it was a TV show back in the day and I knew my grandmother watched it and loved it. So I auditioned and I got hired. So I was brought out to Branson to be a part of the opening of the Lawrence Welk (Theatre) with The Lennon Sisters, who were some of the original Welk stars on the TV show and many of the other Welk TV show stars were also there performing with us. We had a 20 piece orchestra,” said Gier. “It was my first time I had heard about Branson and I just loved that town. I got to be there for five years and just had such a great time.”

Also during his time in Branson, Gier said he was hired to host a Branson talk show call “Your Ticket to Branson.”

“I got to interview a lot of the stars. Glen Campbell was there performing. We interviewed him twice. Debbie Reynolds, I interviewed her. Roy Clark and all the big stars came on our show. That was a lot of fun getting to meet and interview all these big stars as well,” said Gier. “So I did that during the day and then I did the Lawrence Welk Show at night as a soloist; I was one of their soloist singers performing on stage.”

Remembering from his time in Branson how patriotic and devoted to veterans the area is, Gier said he specifically reached out to the Branson Tri-Lakes News, because he knew there were likely veterans in the Branson area that could benefit from watching his documentary.

“This is something that’s going to change their lives if they watch the film and they try some of the programs or treatments; it will save the lives of many people,” said Gier. “The film is all about hope and we produced it to save lives.”

The documentary launched on March 5, on a variety of digital platforms, including Amazon Video, VUDU, iTunes, Vimeo on Demand, YouTube Movies and Google Play. Since its debut, Gier said he’s already heard some amazing feedback.

“I got an email from somebody,” said Gier. “She said her husband had done one of the treatments featured in our film and he said, ‘I have a second chance at life.’ She said, ‘Over the last month he’s been such an amazing husband and my children have their father back.’ People forget, it’s not just the person battling it, it’s their entire family that this film benefits. So we’re encouraging family members to also watch it.”

To learn more about the ‘Wounded Heroes Documentary” or to select a platform to watch the documentary visit woundedheroesdocumentary.com.