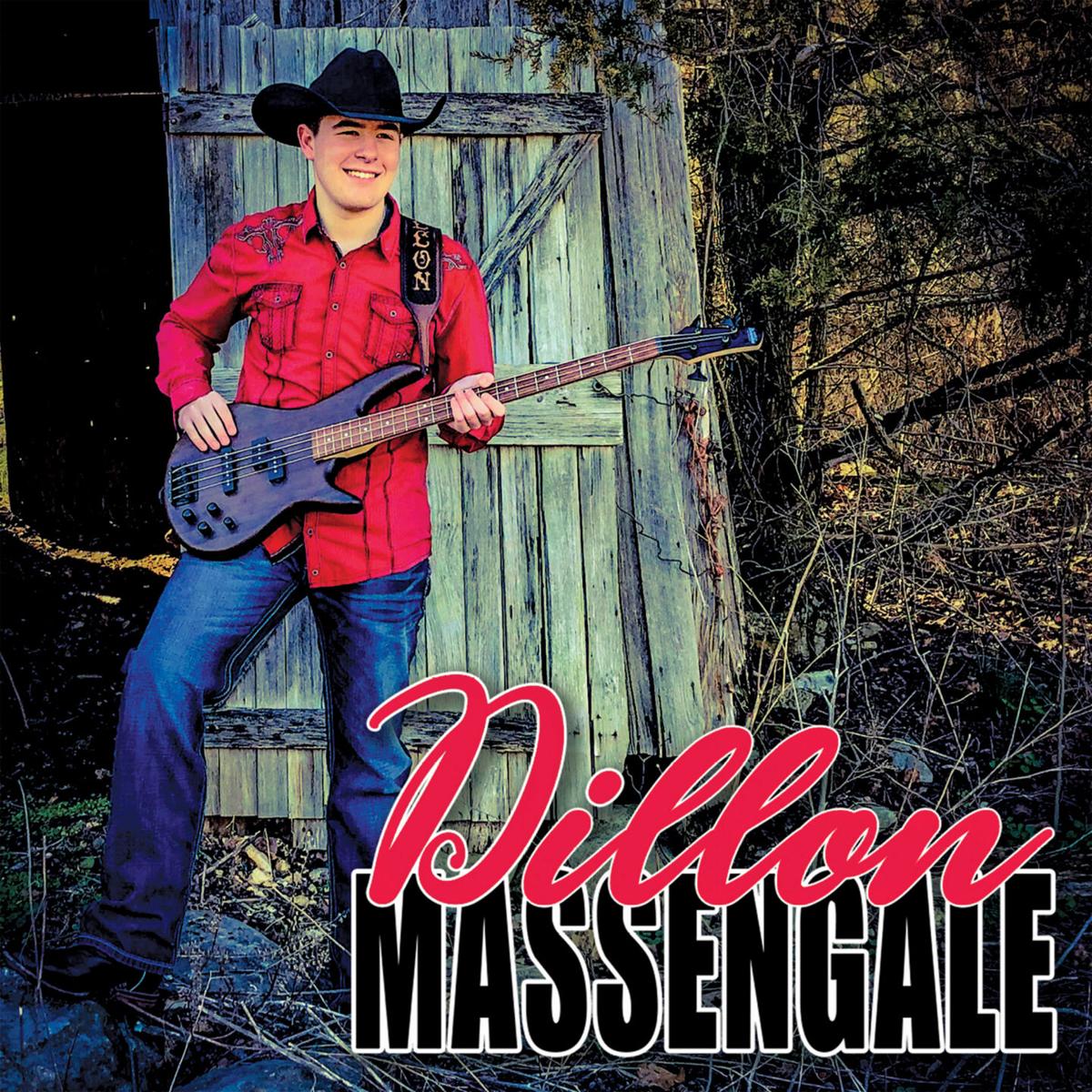 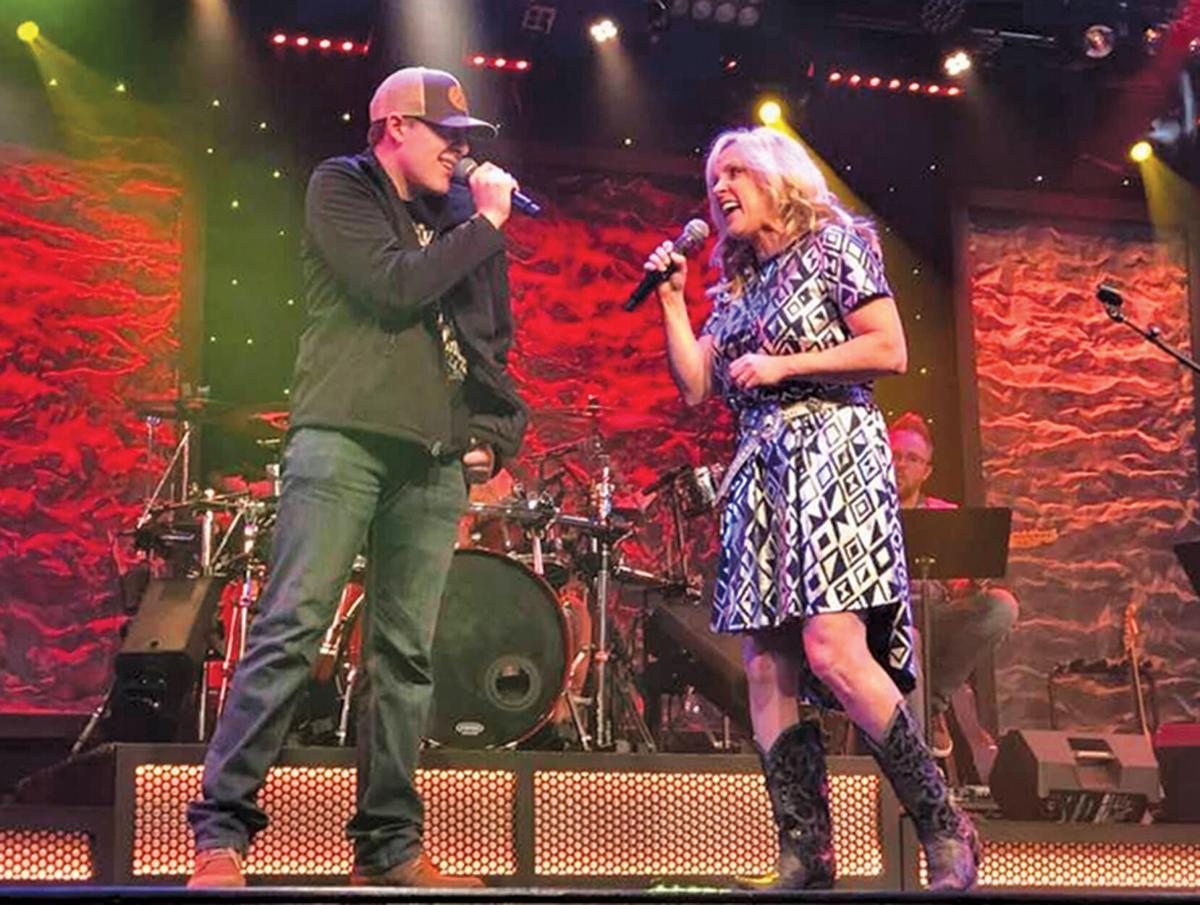 Dillon Massengale performing “What We Don’t Have” with Rhonda Vincent on stage at Grand Country Music Hall. 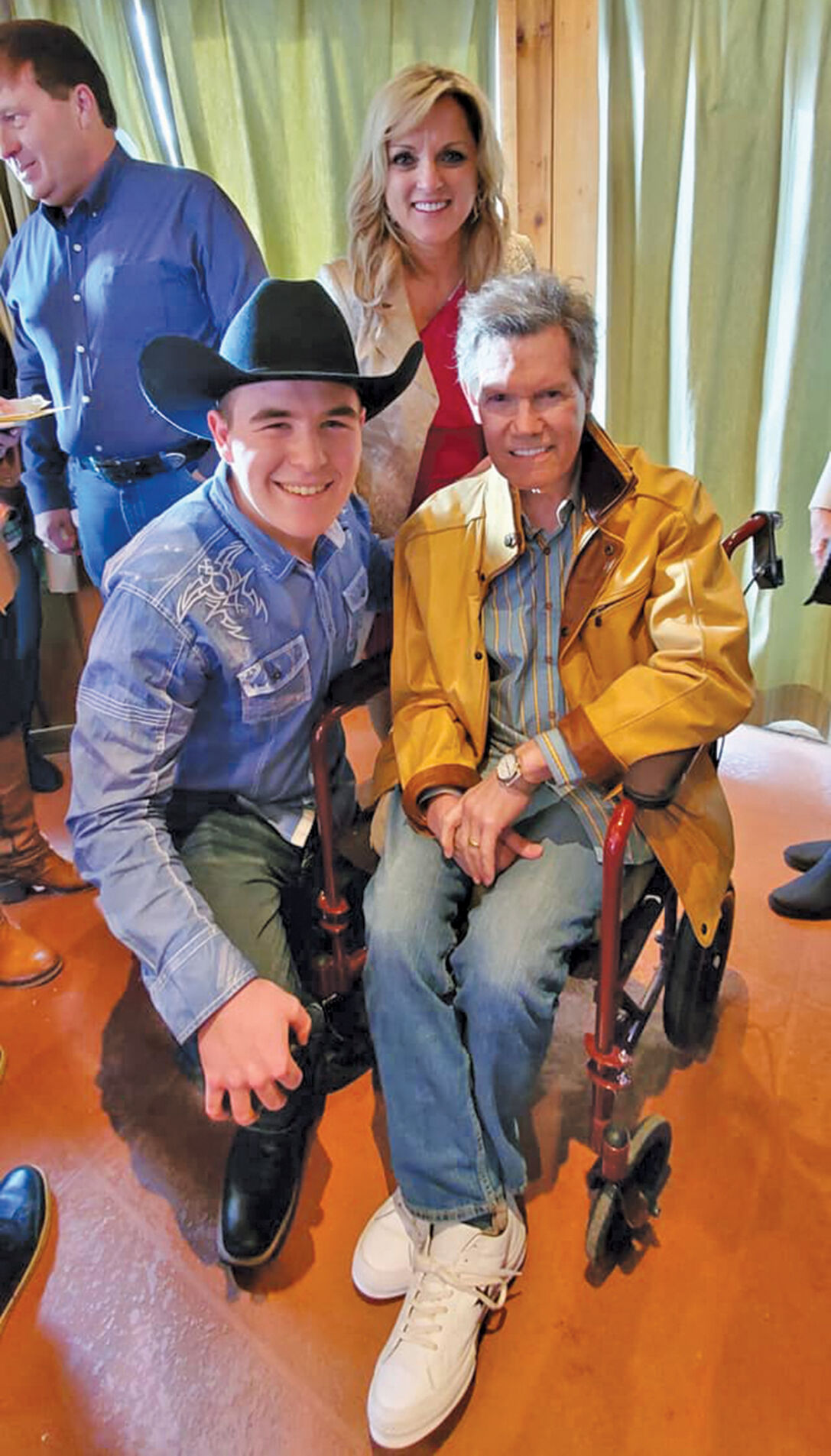 Dillon Massengale with Randy Travis and Rhonda Vincent at the Cherry Blossom Festival in Marshfield back in April. 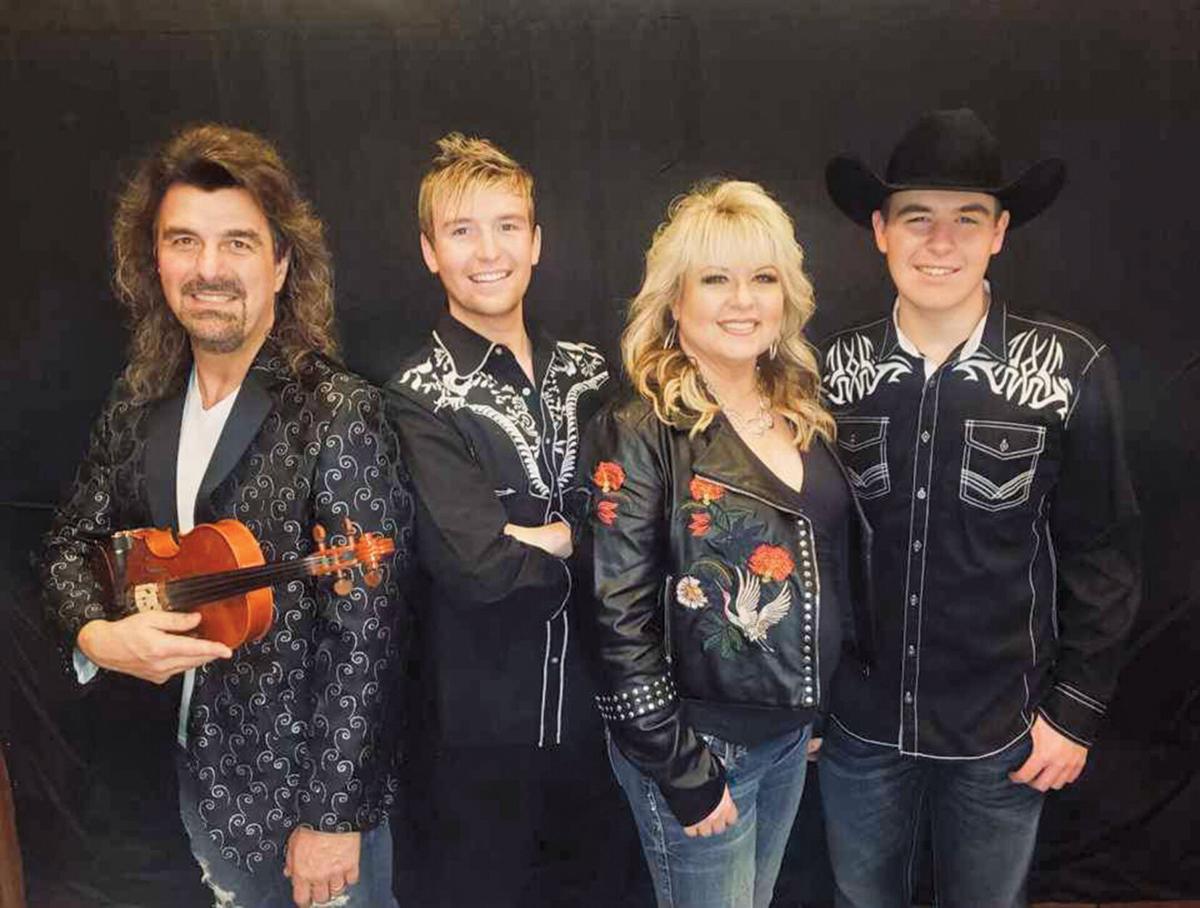 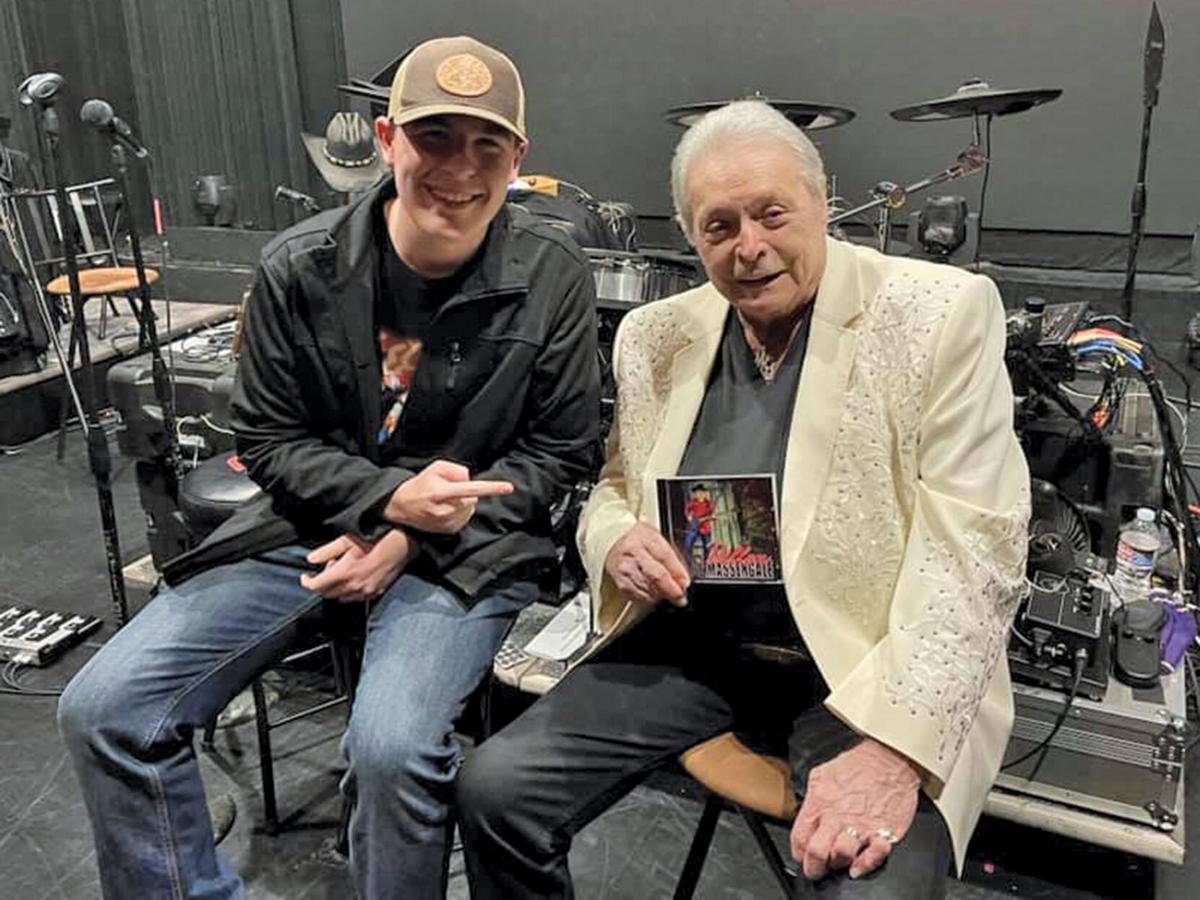 Dillon Massengale performing “What We Don’t Have” with Rhonda Vincent on stage at Grand Country Music Hall.

Dillon Massengale with Randy Travis and Rhonda Vincent at the Cherry Blossom Festival in Marshfield back in April.

One of Branson’s young, and up and coming entertainers has released a brand new CD and it’s gotten the community’s attention.

“There are about three songs that are originals and a few of them you’ve heard from like Gene Watson, George Straight, Alan Jackson, Keith Whitley and all those guys,” said Massengale. “The originals, one is from a local guy that has written a couple songs and he’s a great singer, Mr. Splinter Middleton. I got to sing ‘Here Comes the Loneliness,’ which is an original tune. The next one is, matter of fact, one my dad wrote a few years back. It’s a good ole western swing song called ‘Swinging Country Song.’”

For the third original song on the album, Massengale was joined by a special guest, The Queen of Bluegrass Rhonda Vincent.

“The one me and Rhonda Vincent are singing is an original called “What We Don’t Have.” It was written by Billy Yates and Jerry Sally and it’s a good ole duet,” said Massengale. “She got in touch with us after she got done with her Christmas shows in town, after the Christmas run she had. She got in touch with us to see how we were doing. She found out I was recording my first album and she said, ‘Is there anything I can do or sing or come up with a duet?’ … I said, ‘Yes, absolutely.’”

Massengale also shared what inspired him to want to put out an album.

“Well people have been requesting this for over a year to two years now,” said Massengale. “Pretty much my mom and dad had something to sell and I was left out, because I had nothing to sell at all. I just wanted to do a recording and I did that and it was fun.”

Later this year, Massengale said he plans to present a check to Rock the Spectrum with some of the money raised from the sales of his CD.

“It is a local organization for kids who have been diagnosed with autism or has an autistic child,” said Massengale. “By the age of four and a half to 5-years-old I was diagnosed with high functioning autism. Doctors told my parents and the rest of my family that I wouldn’t get to do what I love to do on stage and perform and now look where I’m at now. This is one of those victories of overcoming those things.”

As it was his first time recording an album, Massengale explained that he experienced a variety of emotions.

“There was a mix of nervousness and excitement,” said Massengale. “It was just both of those, but I was looking forward to having this release and to let people get their copies.”

Melody Hart shared she is very proud of her son and how he handled himself in the recording studio.

“He had moments that were overwhelming, but gosh, he went through it like a pro. I’m very proud of him. He’s used to being on stage, but being on stage and being in a recording studio is two different things,” said Hart. “He really went in there like a pro and knocked it out and did very, very well. It’s hard for me to go into a studio, because I’m used to just doing live all the time, not that. Golly, you wouldn’t of ever known it was his first time to go in their and do something like that.”

Massengale said they began working on the album back in January of this year. He also addressed the challenges of creating his first recorded album.

“The challenge was getting the pitch right on the vocals. I wanted to make sure they’re in tune. If there was something wrong I could go back in there and fix it,” said Massengale. “I played bass guitar and if there was a little flub up I’d go up there and fix it and if there’s any mistakes just let the sound engineer fix it.”

Since releasing his CD, Massengale has received an overwhelming amount of support from the community. Massengale said he thinks the response has been good, because people like this traditional way of music.

“It’s not like music you’d hear today wise from upcoming artists, but it’s just the traditional way of country music that you would hear from the 70s, 80s and 90s; all the way through from the greats to the late greats,” said Massengale, “That’s just how I grew up my whole life. That’s all I’ve ever known is the traditional way of music and playing it live and that’s all I’ve ever known.”

Back in April, Massengale was invited to join Rhonda Vincent at the Cherry Blossom Festival in Marshfield, which featured Vincent, Country Music Legend Randy Travis and HeeHaw Alum Lulu Roman.

“It was my first time to get to sing with Rhonda on stage for the duet,” said Massengale. “This was unrehearsed. Me and her just went up there and did it. I called it unscripted, unrehearsed, a bluegrassy way of the duet, ‘What We Don’t Have.’”

After his performance with Vincent, Massengale said he had the chance to visit with Travis.

“I was nervous, but it was exciting ... He talked with me some after I got done singing. He told me I did a good job,” said Massengale. “People’s been asking me how Randy’s doing, because he had a major stroke a few years ago. Randy, he’s talking more now and he’s ... made a lot of strides with what he’s done. He’s done really good.”

Recently, Massengale had the chance to once again perform his duet with Vincent on Branson County USA at Grand Country on May 7.

Hart also shared what it means for her to see the CD get released, as well as all he has accomplished.

“I’m very proud. I’m very happy for Dillon. He deserves this. I’ve done a lot of crying whenever the first song I heard on the album came through and he let me hear it,” said Hart. “There’s been lots of tears of joy because he’s a good kid. I think he’s very talented and I’m so happy that others see what I see and enjoy hearing him do what he does best and that’s playing music and singing country music.”

Massengale can currently be found performing alongside his family in Branson at Jackie B. Goode’s Uptown Cafe and at the Branson Imax Entertainment Complex inside the Little Opry Theatre.

“I’m really thankful there’s a lot of people out there that are enjoying the good traditional country music today,” said Hart. “I think they’re hungry to hear it and Wayne and I are just so overjoyed with the support that’s behind Dillon. The whole family show thing has just been great. It’s just awesome.”

Additionally, Massengale has recently been given the chance to join his brother Garrett and sit in with Larry Allred’s What 4 Band.

“I’ve known Larry my whole life. Larry, he’s such a great guy. A great bass player and it’s always fun to get to know and get to play the style of music with him,” said Massengale. “It’s a cool feeling to do stuff like that.”

Massengale said he wants to thank all of those who have supported him both on and off stage since he performed for the first time on BCUSA at Grand Country at the age of 11.

“I appreciate their love and support that they’ve given me. I’ve been doing this for five years,” said Massengale. “People have always loved the singing and always loved getting to see me and I just love getting to interact with people. I want to thank Mike Patrick there at Grand Country, Andy Holloway and those people there.”

Those interested in purchasing Massengale’s CD can do so online at melodyhartfamily.com or in-person after any of his performances. For additional information visit the Melody Hart Fan Club page on Facebook.