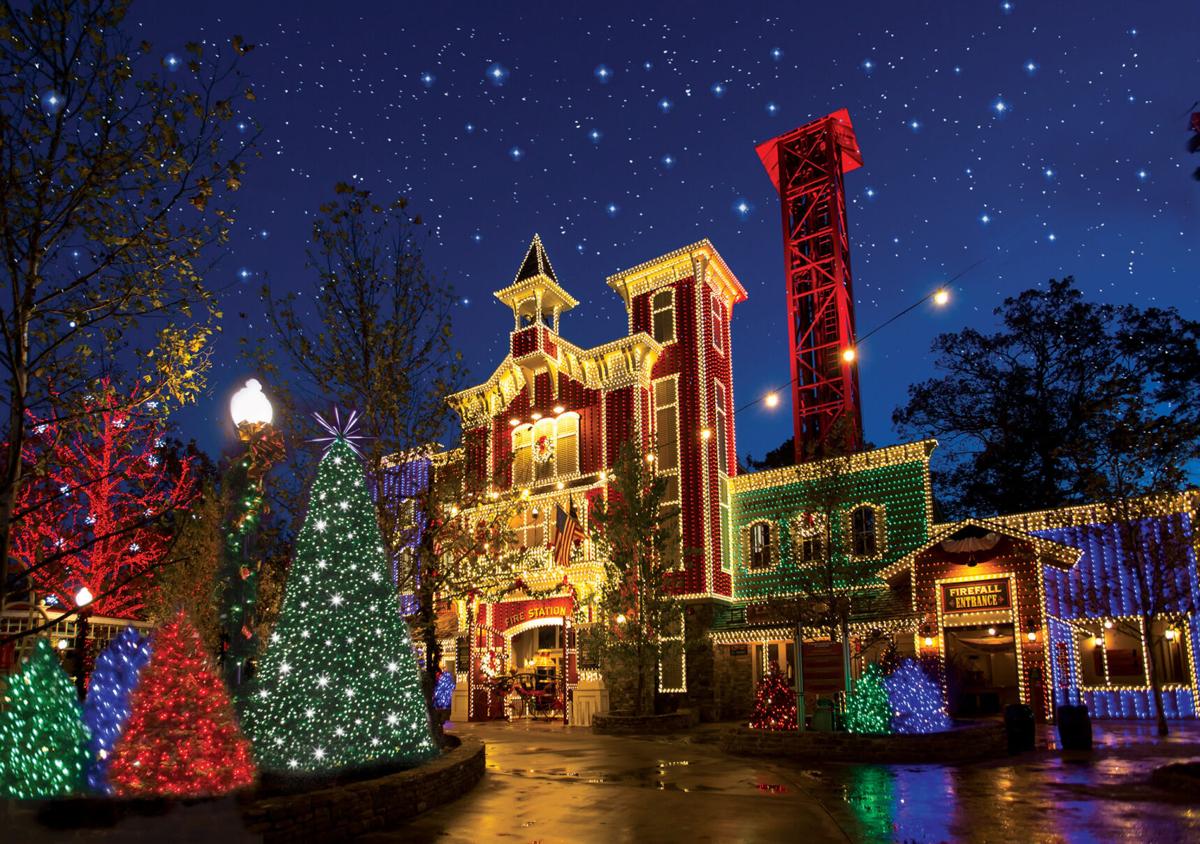 Local firefighters respond to a fire at Silver Dollar City. 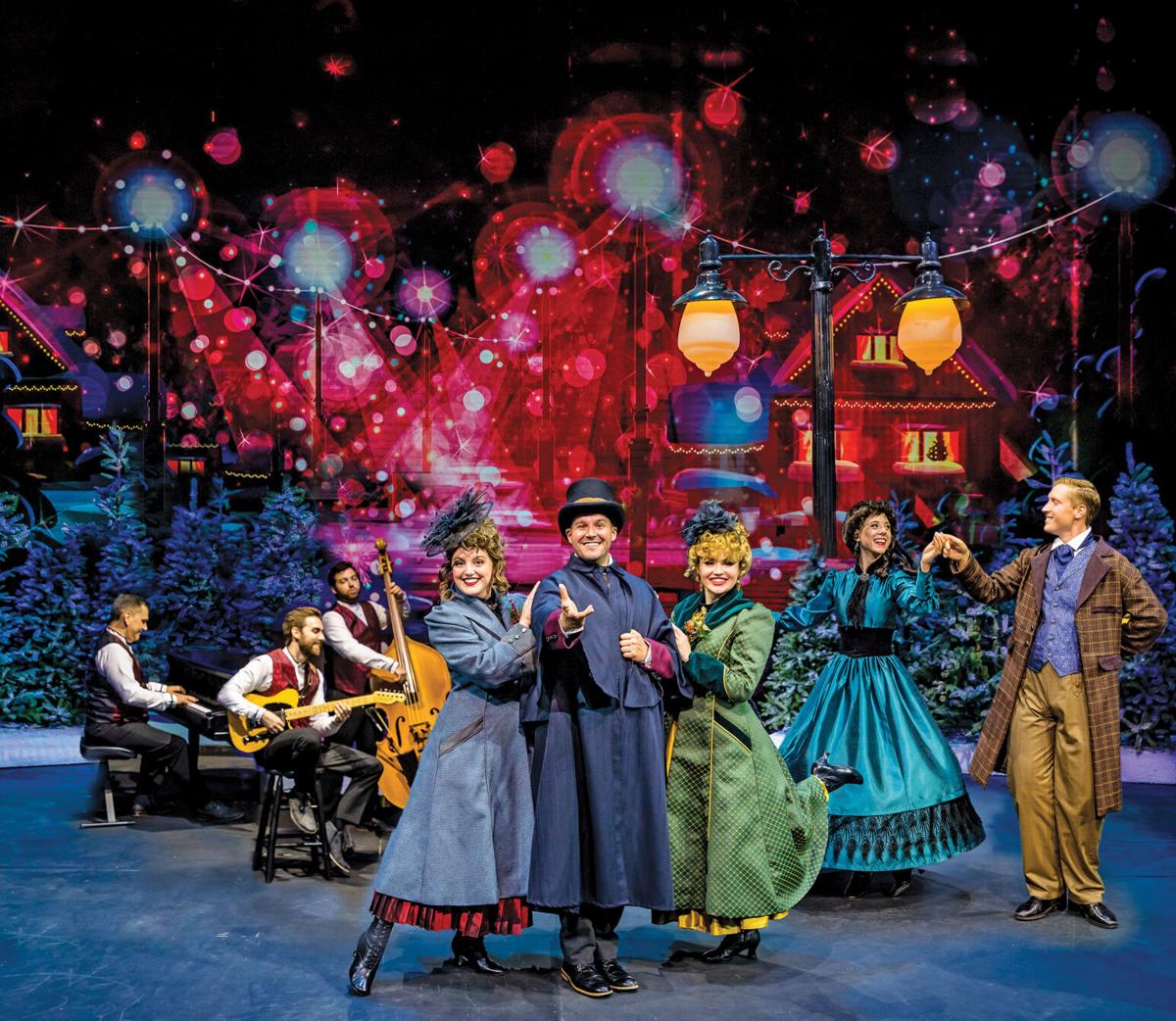 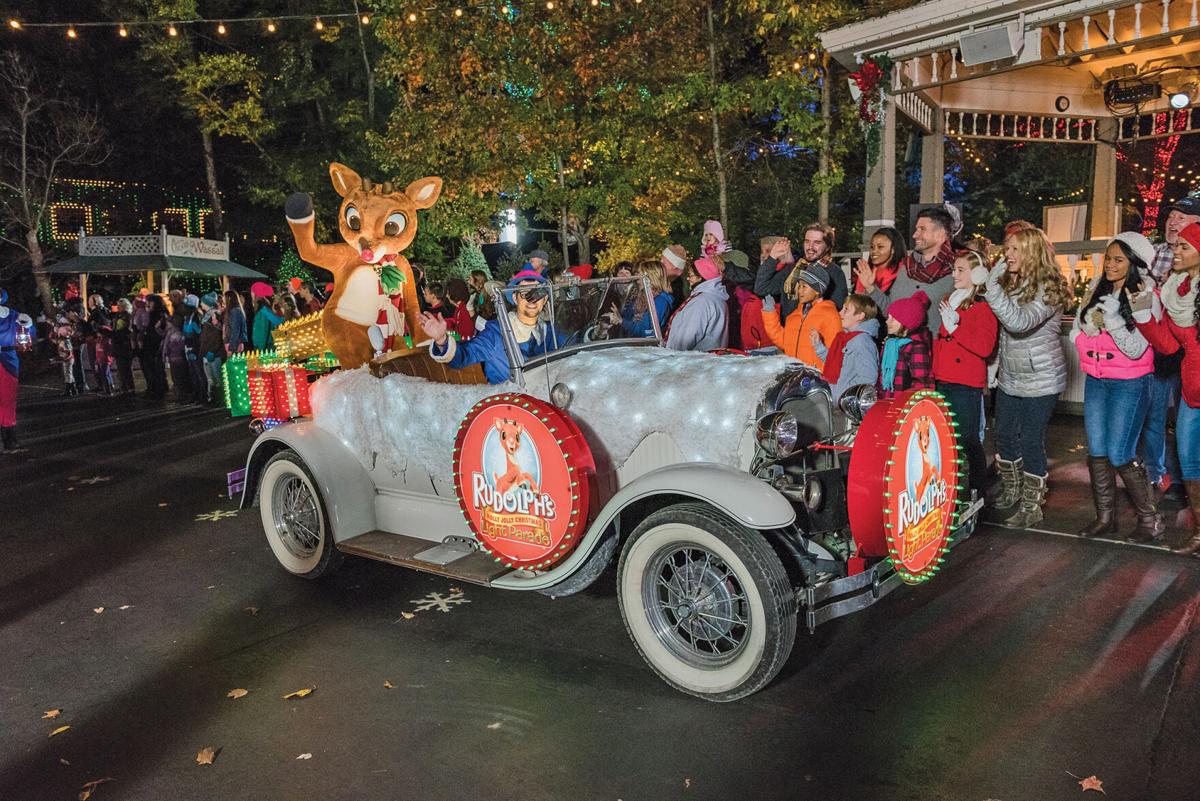 A classic favorite for park goers, Rudolph’s Holly Jolly Christmas Light Parade is once again part of the festival. 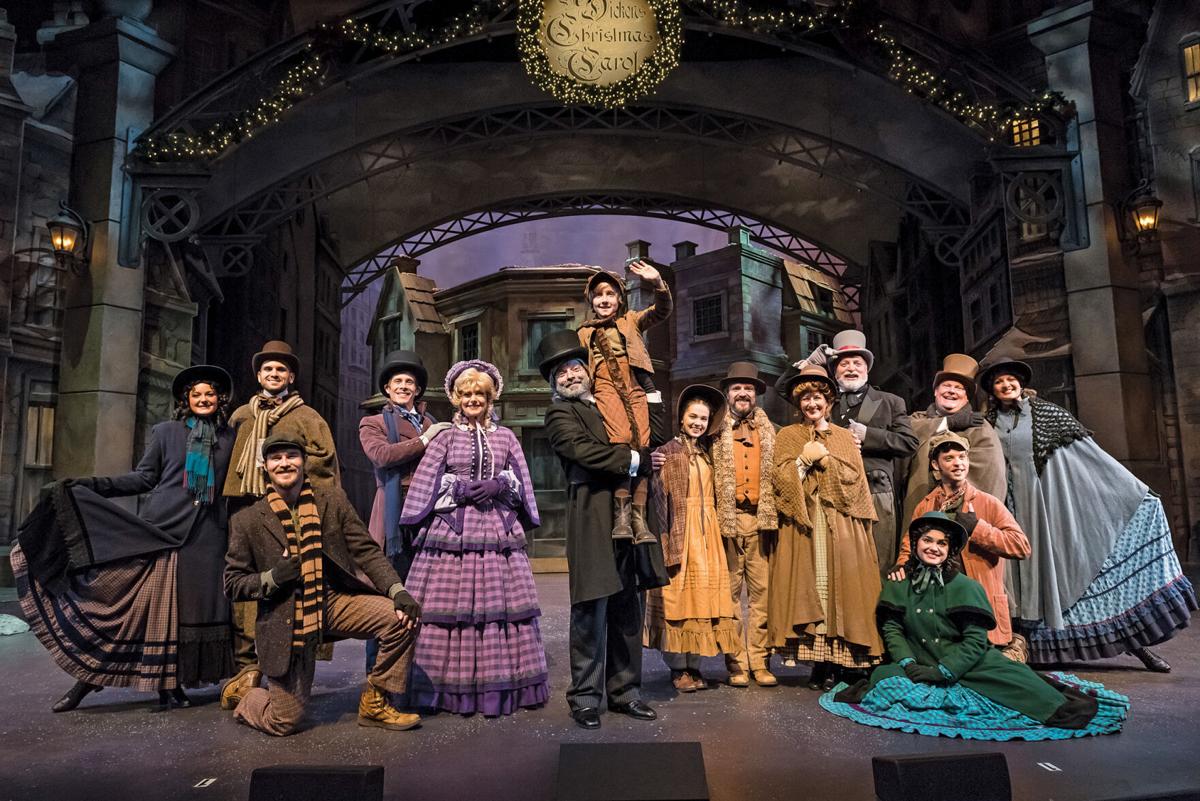 Dickens’ Christmas Carol has been rescored and restaged for the 2021 An Old Time Christmas Festival. 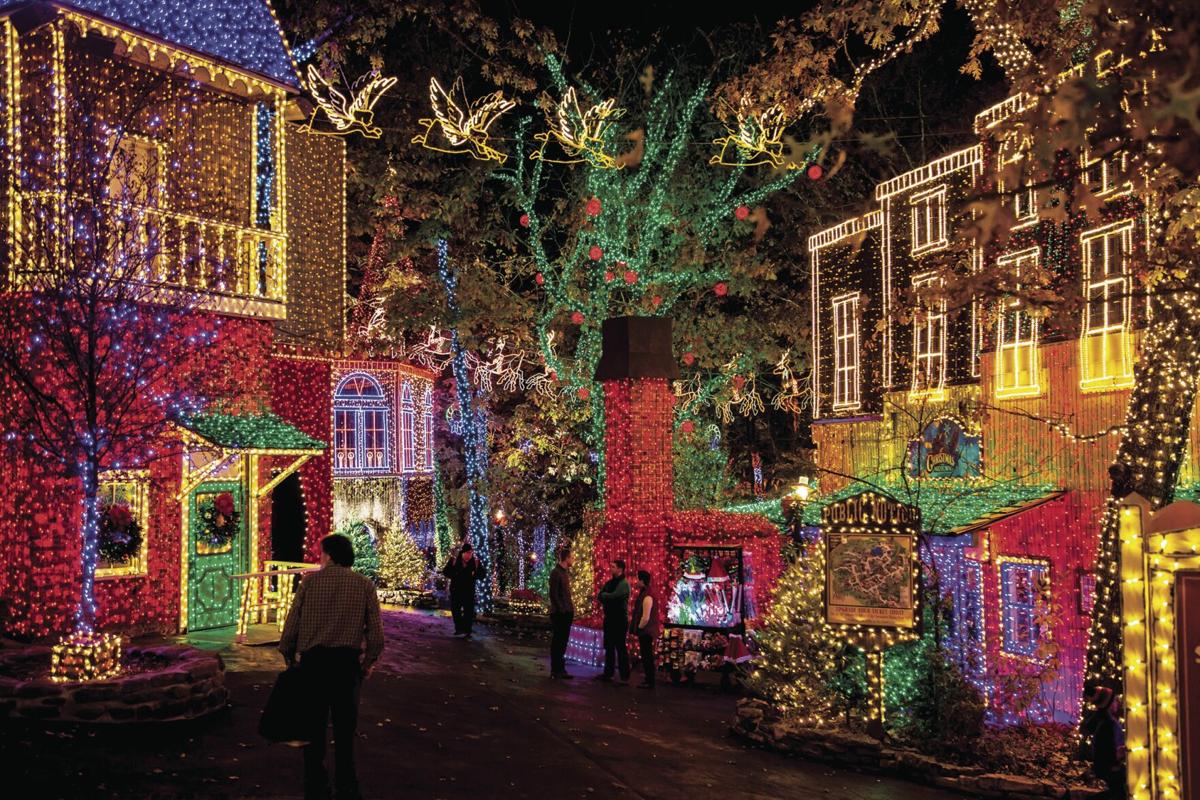 Millions of Christmas lights adorn the buildings, trees and signage throughout Silver Dollar City as part of Christmas in Midtown.

Local firefighters respond to a fire at Silver Dollar City.

A classic favorite for park goers, Rudolph’s Holly Jolly Christmas Light Parade is once again part of the festival.

Dickens’ Christmas Carol has been rescored and restaged for the 2021 An Old Time Christmas Festival.

Millions of Christmas lights adorn the buildings, trees and signage throughout Silver Dollar City as part of Christmas in Midtown.

Silver Dollar City is celebrating the return of their An Old Time Christmas festival with lots of live entertainment, nearly 700 miles of lights and all the classic traditional park favorites guests have come to love over the years.

An Old Time Christmas began on Saturday, Nov. 6 and will run through Dec. 30.  Alongside the beloved 8-story, animated Christmas tree, more than 6.5 million Christmas lights, Rudolph’s Holly Jolly Christmas Light Parade and so much more, the 1880s theme park is offering park guests even more this holiday season than ever before, starting with a new production called Home For Christmas.

“Home For Christmas at Red Gold (Heritage Hall) has 12 singers/dancers and a four piece band and really celebrates all the things you do with your family at Christmas,” Silver Dollar City Director of Entertainment and Events Casey Robertson said. “From picking out the Christmas tree at the Christmas tree farm to getting a little peek at what Santa’s elves are doing at the North Pole and then we have a tribute to veterans and what they and their families go through at Christmas. It finishes up with a gospel section, which is the reason for the season.”

Additionally, this new $500,000, 45-minute production features 28 songs and more than 40 costume changes. Robertson said the goal behind the production’s creation was to offer a show that celebrates Christmas memories.

For 2021, SDC is also presenting a complete restoring and restaging of the classic Dickens’ Christmas Carol. Director Dwight Jordan said as this is the 18th season of the production at the park, they had been thinking about changing the music for a long time.

“We always felt like it deserved an original score. With the time being off with COVID, it was kind of the time we needed to put that together. The whole process of that has been exciting,” Jordan said. “To an audience it’s going to feel like the same show, because the music is going to be perfectly fitting to all the moments and create all those same emotions that have always been a part of this production; but now it’s with music created specifically for this production. We’re all pretty excited about it and really proud of what everybody is going to see.”

Jordan said he believes they’ve really created something special and he can’t wait for people to come out to the park to see it.

“We put our heart and soul into this, because we’ve been so proud of this production for so many years that when we decided it was time to have an original score we just wanted to make sure we got it right. We won’t know until everybody sees it, but we think we got it right,” Jordan said. “I think it’s just going to feel like a warm blanket to everybody. I think people are going to be pleasantly surprised how it still feels like Dickens and hasn’t changed. All the emotions are still there. The cast is just a special group. They’re just crazy talented and it’s just fun watching them.”

On top of these two grand scale productions, Robertson shared they’ve prepared several other Christmas themed productions guests are going to want to make a part of their park visit, including the Frontier Fa-La-La Follies saloon show.

“The saloon show is the longest running show we’ve had at Silver Dollar City. It started in 1973. We’re not back in the saloon, but we’re going to be at the Playhouse Theatre with that show,” Robertson said. “The Saloon is an all-new Christmas show this year. It is the saloon take on all their favorite Christmas shows we’ve ever done at Silver Dollar City. As the saloon does, they have fun with everything we’ve ever done here from Dickens to It’s a Wonderful Life.”

Additional An Old Time Christmas Festival features including Tinker the Talking Christmas Tree at the Boatworks Theatre, Gazebo performances by Allen Asbury and Love Awakening, The Living Nativity at the Dockside Theater and the Frisco Sing-Along Steam Train.

New this Christmas season is the Holiday Meal Package, which gives food enthusiasts a chance to enjoy a meal and snack of their choosing, including a souvenir Christmas mug. Throughout the park, guests can visit family-style restaurants serving up holiday goods and treats of the season. Foods include Holiday Dinner with smoked turkey, ham, prime rib, specialty soups, Silver Dollar City’s Miner’s Beef Stew; plus a variety of homemade ice creams, friend pies and holiday funnel cakes.

Over at Rivertown, the park’s largest and newest addition, folks can enjoy fresh-smoked meats and specialty desserts at Clara Belle’s Cinnamon Bread bakery and the Rivertown Smokehouse, which offers covered decks with heaters allowing for outdoor dining along the banks of the Mystic River.

For Christmas light enthusiasts, SDC goes all out and then some, 1,000 decorated Christmas trees, 600 wreaths, over three miles of garland and ribbon, and 6.5 million Christmas lights; including the 1.5 million LED lights that make up Christmas in Midtown complete with lighted tunnels and displays up to 9-stories tall.

During the Christmas season, guests can also enjoy the park’s award-winning rides as they take in the Christmas lights displayed at each attraction.

Also on select days, park attendees will have the chance to visit with ole St. Nick himself at Santa’s Cottage at the Carousel Barn. Families can stop by the cottage window to have their photos taken with Santa after he visits with the little ones.