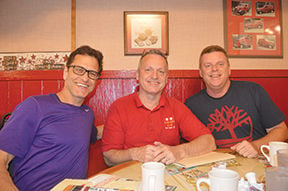 Steve Hartley, from left, Don Vidler and Dave Montgomery chat about life in the 5 & 10 business and Dick’s 5 & 10’s 55th anniversary over coffee at the Branson Cafe Wednesday morning. 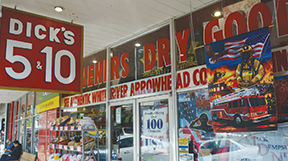 Steve Hartley, from left, Don Vidler and Dave Montgomery chat about life in the 5 & 10 business and Dick’s 5 & 10’s 55th anniversary over coffee at the Branson Cafe Wednesday morning.

Dick’s 5 & 10, one of Branson’s most iconic downtown businesses, celebrated its 55th anniversary last week. The store was founded in 1961 by Dick Hartley, who adopted a philosophy of making shopping fun again and making the location “more than a store.”

“Being the tough bird he was, he wanted to be in the variety business, so he added a pencil here and a notebook there and finally found a guy who would sell it to him,” Dick’s son Steve Hartley said. “Little by little, he became that variety store.”

When a young Dick Hartley graduated from college, he went to work at the S.S. Kresge dime store in Chicago. Hartley and his wife soon moved to Oklahoma, where he worked for TG&Y, another dime store chain. The Hartleys and their baby Steve, who currently runs the store along with his brother-in-law Dave Montgomery, in tow, moved to Branson and in 1961 and opened Dick’s 5 & 10 on South Commercial Street, where the Hot Hits Theatre is now located. The store remained at that location until 1973.

Steve Hartley practically grew up at the store he now runs.

Even though Dick’s 5 & 10 is now a Branson institution, the Hartleys fought a long time to make it that way.

“Dick didn’t know exactly what Branson could become, but he knew it had the most potential of all the communities he considered,” Montgomery said. “Then he slugged it out for 25 years before it really took off, which was in the early 90s. That’s when it really started to resemble what it is today. Those first 25 years were lean.”

According to Hartley, for most of that time, his folks were the only employees.

“I’ve heard it many times before, they ran a ‘bare bones’ operation,” Hartley said. “That’s how it got to be what it is today. But he always had the philosophy of having a well-stocked store and to make shopping fun again by offering more than just the opportunity to come in buy something. To give them an experience.”

“Part of the experience is having this incredible merchandise that the big boys aren’t capable of carrying,” Montgomery said. “They’re too far away from it, while we’re here with it every single day, touching and feeling and making these decisions so we can have the things those other guys can’t or don’t want to mess with.

“Plus, they get the nostalgia of the building ... the help from our staff and the incredible variety of merchandise that ties it all together.”

In fact, that merchandise changes daily.

“We’re on the road about six weeks out of the year looking for new things,” Hartley said. “People know they can come in and find the nostalgia, but they can also find the trendy, new things that are coming on, and that attracts a wide variety of customers.”

In addition to celebrating a milestone last week, the Hartley family also got to meet up with Don Vidler, owner and operator of the largest 5 & 10 east of the Mississippi River, Vidler’s 5 & 10 in upstate New York. Strangely enough, Vidler was in town with a group of friends and had no idea they were celebrating 55 years.

“I knew about this place,” he said of Dick’s 5 & 10. “I have post cards on my desk from here because so many people in our town have visited here, so I just sent a Facebook message asking to come see the store, having no idea it was their anniversary.”

Parson postpones trip to Israel due to country's COVID restrictions

Matthew McConaughey announces he will not run for Texas governor

Vidler, Hartley and Montgomery met for coffee at the Branson Cafe Wednesday morning and discussed the importance of family-owned businesses.

“We’re bringing a different level of passion and dedication you don’t see if you walk into a corporate atmosphere, and if they come in and know it’s going to be an experience, 99 percent of the time they’re already in a good mood, so all we have to do is execute our plan and not blow it.”

Vidler, who is known regionally for his comedic commercials and YouTube videos, said he fully plans on keeping up with Dick’s after his Branson experience.

“We want to pin him down for a couple of days and pick his brain,” Montgomery said. “They are so far ahead of us, as far as technology, social media and their commercial production after we did some investigating, we knew we wanted to do some of the things they’re already doing so well.

“We want to do it right and make sure we’re conveying the message we want.”

As far as how long the current duo will keep running the store, and who will take over when they step down, Montgomery said it isn’t something that needs to be decided on anytime soon.

“The percentage of family businesses that make it to a third generation, like Vidler’s, is about 5 or 6 percent, and fourth generation family businesses are almost unheard of,” Montgomery said. “I have two daughters, and Steve has no children, so we don’t know the answer to that. But we do know we’ve got another 20 years or so left.”

“We want to make as much of an impact as we can on people’s lives with this store,” Hartley said. “We want to show them an experience that, unless they’re in Branson or upstate New York, they’re really not going to get anywhere else.

“My mother is 86 and she’s still around. She still comes in and talks to people, and they dig that because she was right there beside dad when this whole thing began.”

Hartley said he credits the success of the store to his father’s vision, which also allowed the store to evolve over the years.

“We are running the store on the fundamentals he left us and not varying that at all,” Hartley said. “But if he was here, and he was our age, he’d be doing a better job, of course, but he’d still be doing the exact same thing we’re doing now ... keeping that store fun and interesting, and everything we do revolves around that. He’d be very happy knowing we’ve kept it rolling.

“He loved that store, and wanted it to be a place people could have a great time, and every day, we work like that.”

“I think he’d walk in and say he was proud of us boys,” Montgomery said.

These kinds of success stories are very interesting because they motivate other businesses and intrapreneurs to work hard and keep trying for the success of their business. I will share this story with my friends. I need to read reviews about legal service before I hire an online writer to write me an essay about this story.