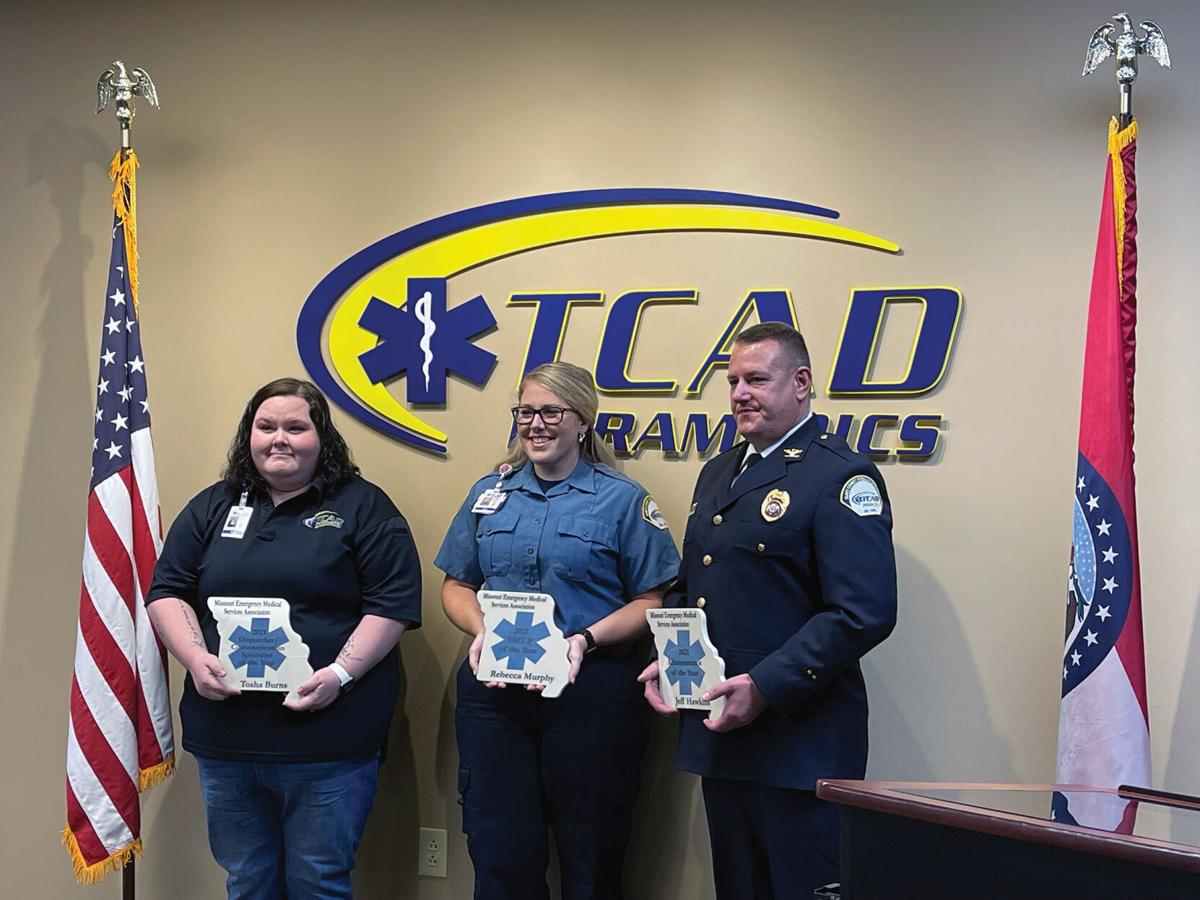 Three TCAD staffers have been given statewide honors for excellence in their field. 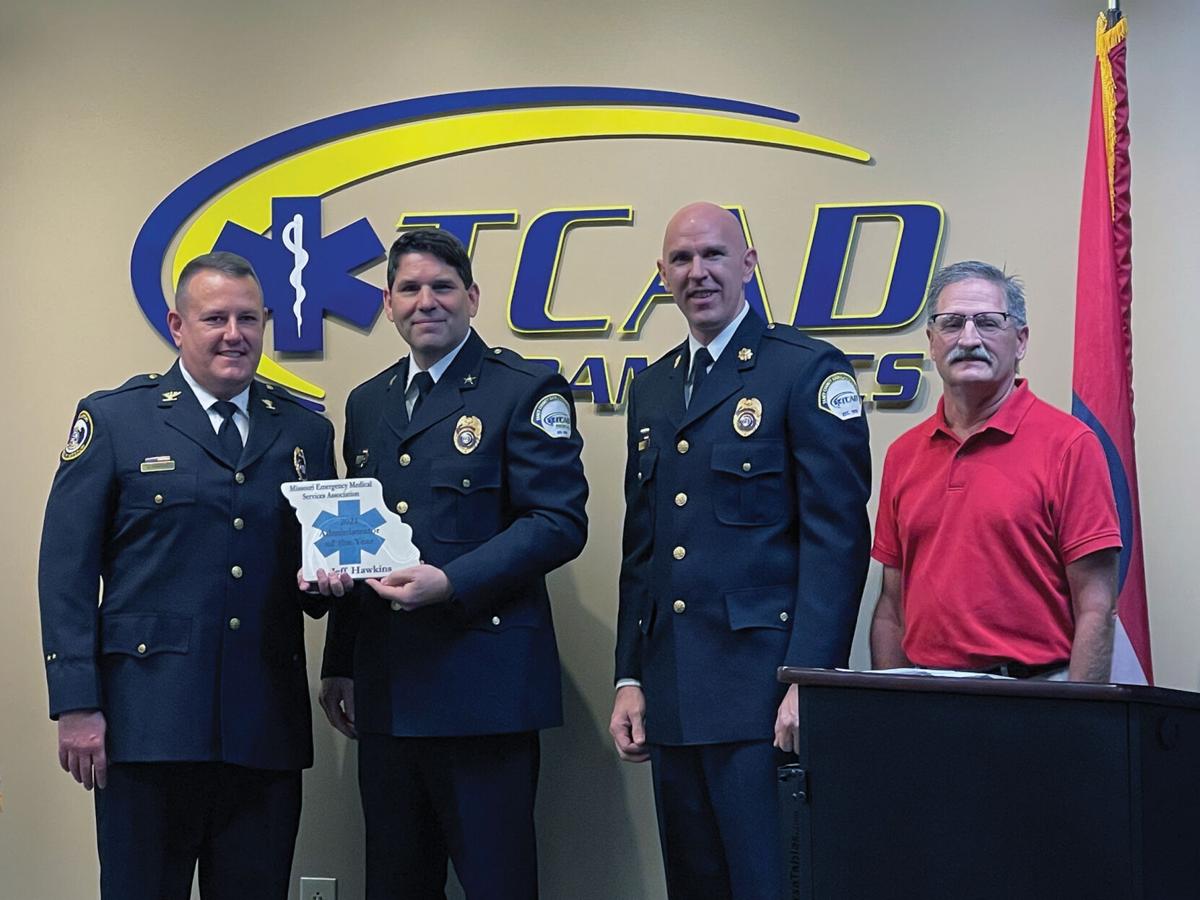 Three TCAD staffers have been given statewide honors for excellence in their field.

MEMSA board member Jason White gave the honors to the three at a special private ceremony at TCAD’s offices in Hollister on Thursday, Oct. 7, in lieu of a normal statewide ceremony, which was called off over fears surrounding COVID-19.

The first award was given to Tosha Burns, who was named MEMSA Dispatcher/Communications Specialist of the Year. White said Burns has a high stress position.

“They don’t get to see the results of their work,” White said. “They get stuck on the phone with people who are having the worst moment of their life and they get to walk them through that, and then guide the crews, but they never get closure. Talk about a high stress job and yet you have one of the best at TCAD in Tasha.”

Burns began her career as a 911 Telecommunicator with the Hollister Police Department in 2017 and joined TCAD in 2019 as an Emergency Medical Dispatcher. She was named the Communications Training Officer in 2020, and conducts quality control by conducting calls and peer reviews.

Rebecca Murphy was given the MEMSA Paramedic of the Year award.

Murphy was cited by White for pushing for new equipment in emergency vehicles which has allowed EMTs to make faster and more accurate assessments in the field.

“She pushed the conversation about ultrasound technology,” White said. “The concept of field paramedics saying ‘that’s a product which can enhance our service to our community’ and then you take it through the process and convince a medical director to do it? If you have a paramedic with that kind of drive it’s someone you want to hold on to.”

Murphy began her career in 2013 with TCAD as an EMT. She completed paramedic school at North Arkansas College in 2015, going on to earn her Bachelor’s Degree and Flight Paramedic Certification.

Murphy was also cited by MEMSA for her work after a bridge in Taney County experienced an emergency closure in 2019 due to bridge damage. The detour the bridge’s closure required was 20 miles, and Murphy was the only ALS responder on the eastern side of the bridge. She took it upon herself to have emergency equipment available in her personal vehicle, so she could respond to calls alone within her area before her teammates could arrive due to the extended travel times.

She also helped form the Ozark Mountain Peer Support Team to help first responders who were suffering from PTSD or other mental health issues following the 2018 Duck Boat tragedy on Table Rock Lake. She is still a leader in the group.

“I feel ridiculously honored,” Murphy said. “I work with the best teammates.”

Murphy said it takes heart to do what she does.

“It’s a lot of hard work,” Murphy said. “You have to have your heart in this or you won’t last.”

The MEMSA’s Administrator of the Year award was given to TCAD Deputy Chief Jeff Hawkins.

White said he has known Hawkins for years and it’s been exciting to see his career bloom through the years by showing excellence to the community.

“You have excellent service,” White said. “One of the few which is accredited...and you get there because of leadership like Jeff, who understands the value of telling citizens ‘we’re going to measure ourselves against a higher bar.’ Accreditation says you’re going to the gold standard, and to hang onto them takes a lot of work and dedication, and Jeff has provided the leadership for those.”

TCAD is one of 30 ambulance services in the United States to have both CAAS and ACE certifications.

Hawkins joined TCAD in 1991 as a part time EMT and began full-time in 1992. He has progressed through the ranks from EMT to paramedic, Lieutenant, Captain, Major, and his current position as Deputy Chief.

He has been a part of TCAD moving from a small service in 1992 which used an “on-call” method with a “fire-bar” emergency phone leading to a response from a paramedic’s home to TCAD’s current 24/7 EMS system which handles 15,000 calls for service each year.

Hawkins recalled for reporters the difference from the early days until today.

“We would answer the calls as our own dispatchers and then drive to the station to pick up the ambulance,” Hawkins said. “Once we were done, we would go home and go back to bed. Some days you couldn’t, but most of the time we did because we weren’t so busy.

“Then you had the boom of the ‘90s in Branson and it all changed for us. We had to go to service seven days a week, 24 hours a day, because the call volume was just too much to answer from home.”

Hawkins is in the process of moving forward a succession plan, as he will retire in spring 2022, after serving over 30 years.