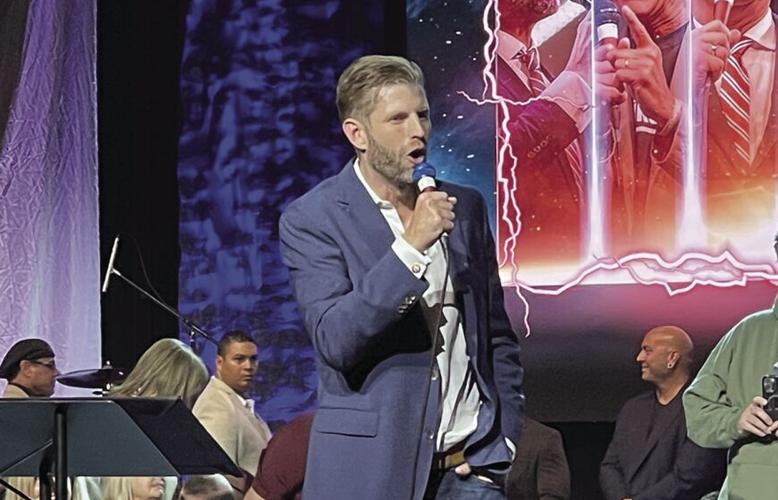 Eric Trump, son of former President Donald Trump, speaks to the crowd at the 2022 ReAwaken America event in Branson, Missouri. 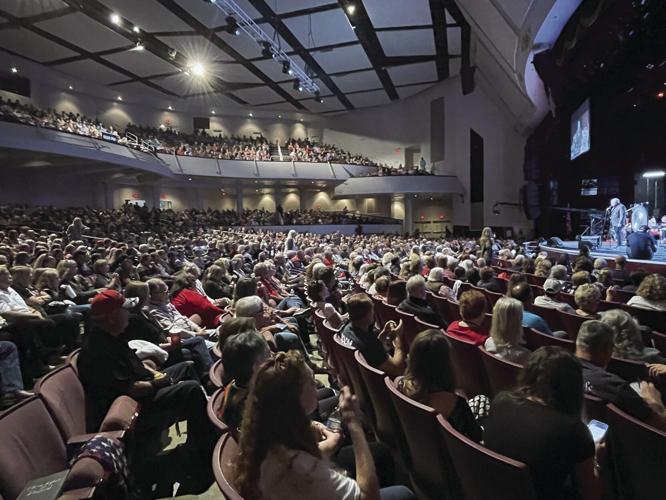 A sold-out crowd of over 3,000 people filled the Mansion Theater in Branson for the 2022 ReAwaken America event.

Eric Trump, son of former President Donald Trump, speaks to the crowd at the 2022 ReAwaken America event in Branson, Missouri.

A sold-out crowd of over 3,000 people filled the Mansion Theater in Branson for the 2022 ReAwaken America event.

The Reawaken America tour featuring several prominent conservative social and political figures made a stop in Branson at the Mansion Theatre for the Performing Arts on Friday, Nov. 4 for the start of a two-day rally.

The opening day featured speeches from event organizer and Tulsa-based entrepreneur Clay Clark, MyPillow creator Mike Lindell, and Eric Trump, among multiple other speakers and singers to a packed house of over 3,000 people.

Several speakers addressed the COVID-19 pandemic from multiple angles, such as endorsing the use of hydroxychloroquine, finding methods of “detoxing” from having taken the vaccine, and the ways “big pharma” has manipulated the government to get immunity from vaccines causing health problems. One of the speakers was Texas-based doctor Stella Immanuel, who became nationally known for advocating for hydroxychloroquine on the steps of the U.S. Supreme Court, in a video shared on Twitter by former President Donald Trump.

“Let’s get some doctor things out,” Immanuel said. “First, hydroxychloroquine works. Ivermectin works. And they work on Coronaviruses, even the flu. And my advice to everyone is to make sure you have it in your medicine cabinet.”

Darren Myers, the founder and president of Freedom Encounter, the theatre and museum located at 3220 Falls Parkway in Branson, and the original location for the rally before moving to the larger Mansion Theater, spoke about his organization’s mission to educate on the history of America.

“We’re in a fight for the soul of our nation,” Myers said. “You can’t have freedom without truth, and you can’t have truth to the people without education. Part of the battle is just educating this next generation and understanding we can’t sustain freedom without knowledge. That’s why Thomas Jefferson said ‘If a nation expects to be ignorant and free in a state of civilization, it expects what never was and never will be.’”

“I look at all the things that happened from the time I was given the first evidence on Jan. 9, 2021 that showed all these people that voted illegally,” Lindell said. “Every single state in the 2020 election and in every single county crimes were committed, like someone voting who didn’t live in the county. And I didn’t even look at the dead people whom they used their names.”

Lindell said his evidence is under a gag order in Nevada. He told the crowd his lawyers have issued a number of subpoenas related to the case in the last few weeks, and they’ll be doing depositions before releasing evidence.

The final speaker of the first day, and the speaker who drew the largest response from the crowd, was Eric Trump, the son of former President Trump.

Trump opened by sharing he was happy to be in Missouri after participating in previous events in places like Oregon and Washington, which he said was hostile to a conservative message.

“It feels like homecoming,” Trump said. “We’re finally in friendly territory, I love it. I think my father only won this state by, like, 35 points, right? That’s because there was no election fraud in Missouri.”

Trump told the crowd he felt the Democratic Party has been attempting to weaponize American institutions to increase their control over the nation.

“They weaponized education, you’ve seen what they’re trying to do to little kids, trying to indoctrinate little kids,” Trump said. “They’re weaponizing higher education, you see what they’re doing in colleges. I went to Georgetown, and this female professor came out and said every white male in the country should be castrated, and they didn’t fire her. I literally almost called Georgetown to tell them to take back my diploma because it’s not worth anything anymore. They’ve weaponized the system.”

He talked about law enforcement, prosecutors, and the FBI who he feels are targeting those who disagree politically with the current administration. He said big tech has been taking efforts to suppress conservative comments.

Trump referred to allegations against Hunter Biden for using illegal drugs and other crimes.

He said his father ran for president because he was fed up with the way America was declining both domestically and on the world stage, such as when he said former President Barack Obama gave billions of dollars to Iran.

“A country that chants ‘death to America,’” Trump said. “He threw the [newspaper] across the desk and he’s apoplectic, saying ‘What the hell are we doing? Have we lost our damn minds?’ I mean, the answer was yes, right? Giving $150 billion to a country that’s trying to develop nuclear weapons to use against us isn’t exactly brilliant thinking.”

Trump also pushed back on Democrats using the label “Ultra MAGA” against his father, their family, and their supporters.

He ended his talk by saying his family will “never, ever, ever, stop fighting” for America.

The Friday event concluded with events off-site of The Mansion Theater grounds, including a meet and greet with event speakers and a church hosting baptisms at the AmericInn in Branson. There were also a number of vendors in attendance, selling items from Trump 2024 hats and shirts, to memorabilia depicting former President Trump as Superman, and products from Lindell’s MyPillow company.

A protest of ReAwaken America, mobilized by Word & Way and Faithful America, gathered around half a dozen people Friday afternoon at Stockstill Park, about two miles from the ReAwaken America event site.

Shame on The Mansion Theater for hosting frauds, insurrectionists and liars! Shame on this local newspaper for giving them a platform. I've been in this town since 81 and I've never been more ashamed of what this town is becoming! Unrecognizable!! Congratulations for becoming part of the problem we currently see this country in. Evangelicals praying for the wrong thing. Makes you all look hypocritical. All I feel is shame.

This is the kind of event we need in Branson. We need all the hate and division we can get. If you agree with this statement then you are part of the national problem. Trump's son, a discontent guy that makes an lumpy pillows and more people that only support the idea that our 2016 election was fraudulent. Trump's own son stated they had trouble with hostile crowds in most other places they held the same event while he and the others continue to spread their same lies. These idiots must know more the 100 lawsuits they filed were thrown out of court. Many the of the judges were appointed by Trump himself. Not one of the suits were upheld. They know more than the election officials in the states he lost and were illegally pressured to overturn the states results. Now they only disagree with the states they lost. To them every state they won did not have fraud only the states they lost. I have been a Republican all my life and have supported my party up until the 2016 and 2020 election when the only choice I had was a man I thought would bring trouble to my party. I couldn't bring myself to even think about voting for Trump because I knew what he was capable. I had no idea just how dangerous this man could be. I can't understand how many of my fellow local citizens, knowing, if nothing else but what they witnessed on Jan. 6th, could sit and listen and I assume support these haters with their dangerous agenda. I don't agree with a lot of the current administration but at least he isn't trying to rewrite our constitution to where it suites his own deranged agenda. I hope in 2024 my party gives us a solid candidate I can support. I'd even support Mike Pence whom I presume the ones sitting in the theater watching this fiasco think is evil because he refused to go along when Trump wanted to him to illegally dump election results. Events like this continue to divide our country. Everyone that saw and heard the aftermath of that election and continue to support him have zero belief in our constitution. They only agree with the state elections they won everything else is fraud. I believe in our election process but refuse to go along with this dog and pony show. Shame on those who are responsible for bringing this event in our area. We have enough problems locally without bringing in outside trouble asking us to support a man who believes the process is fraudulent only in places he lost. It a sad time when we're asked to agree with hate and division and support a dangerous and illusionary man.