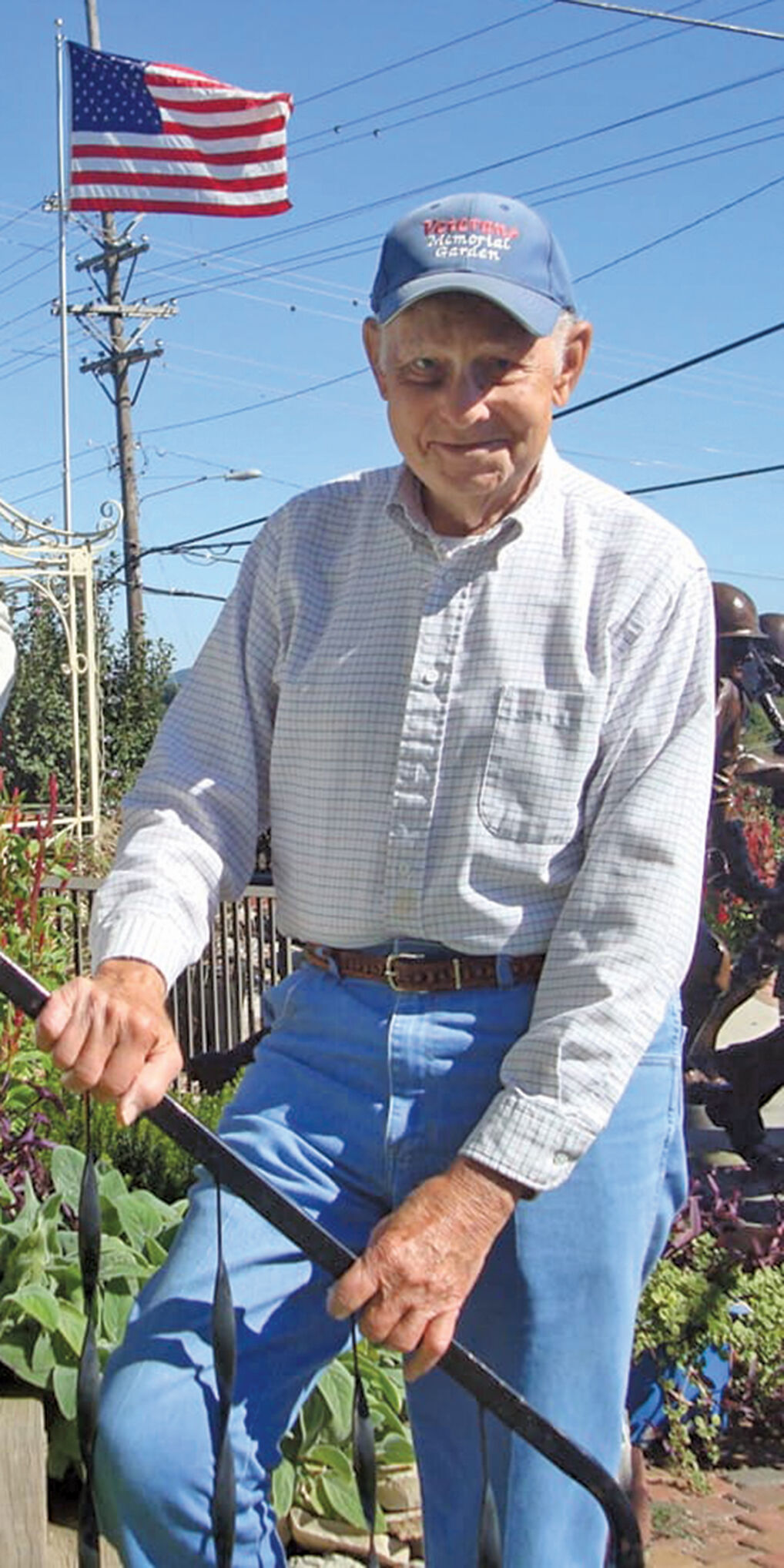 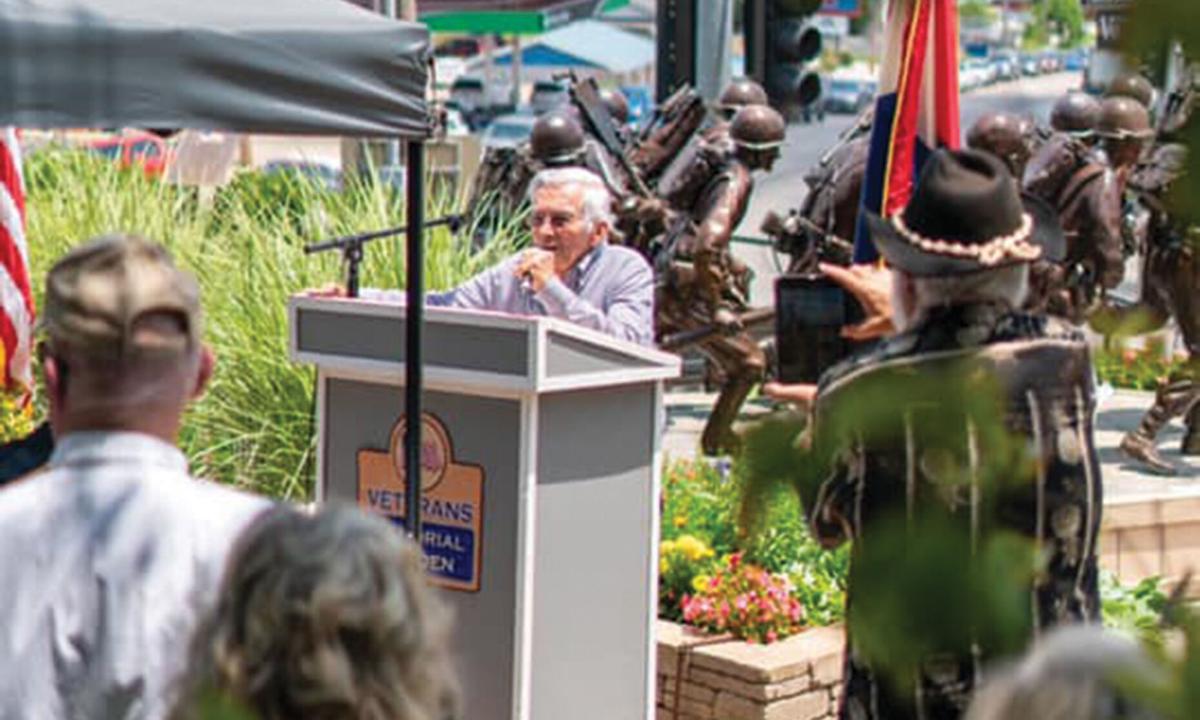 Jack Herschend spoke of his friendship with Kinel and the work they did together to start the Veterans Memorial Garden. 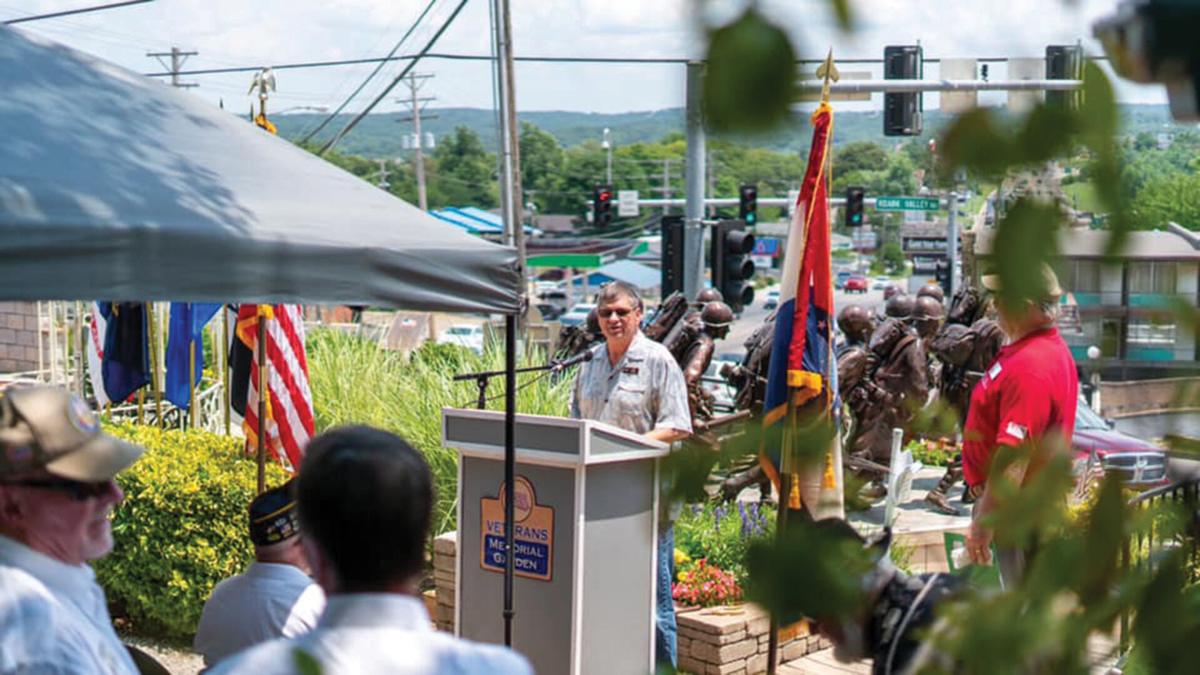 Jack Herschend spoke of his friendship with Kinel and the work they did together to start the Veterans Memorial Garden.

A memorial service dedicated to Ben Kinel, founder of the Veterans Memorial Garden, who recently passed away, was held in honor of the work he has done for the Tri-Lakes community and the country.

Kinel founded the Veterans Memorial Garden in 2008 and remained as the administrator until May 2021. According to Branson Tri-Lakes news archives, the garden is dedicated to veterans of all branches of service. Over the past several years, thanks to Kinel, the garden became a popular spot to visit in Branson.

Family and friends gathered on Friday, July 9, at the Veterans Memorial Garden, located at 102 Crosby Street, W. Hwy 76 and Roark Valley Road in Branson, to honor his memory. The memorial was hosted  by the Veterans and Military Coalition of the Ozarks.

Missouri Sen. for District 29 Mike Moon attended the memorial and presented Kinel’s wife with a resolution from the Missouri Senate.

“I’ve heard a lot about your husband, many of the highlights. I’ve been honored to honor Sergeant Ben Kinel for the work that he’s done here, in addition to his dedication to our country,” Moon said. “On behalf of Senate Pro Tempore Dave Schatz and behalf of the Missouri Senate, we honor your husband, Ben Kinel and you, with this resolution.”

Director of Constituent Services for U.S. Rep. for District 7 Billy Long’s Office Lisa Saylor also attended the event on behalf of Long. Saylor presented a letter at the event that Long wrote in honor of Kinel.

“This letter comes in welcome recognition of Sergeant Kinel’s dedication to the Veterans Memorial Garden. As a veteran of the United States Marine Corp, his commitment to our community continues to be seen through the tireless service he has given to this beautiful garden we have gathered in today. We gather to honor Sergeant Ben Kinel’s dedication and commitment to this Veterans Memorial Garden. The garden that we stand in today wouldn’t have been possible without his tenacity and courage to have that first conversation with Jack Herschend many years ago. That conversation led to a commitment from other veterans who jumped on board to see this vision through,” Saylor said, reading from Long’s letter. “For 12 years, the community has enjoyed the sacrifice of Sergeant Kinel, as he gave countless volunteer hours and loaned the community his green thumb to make this garden what it is today. Our nation would not have become the great nation that it is today without citizens who faithfully support and care for our country. I consider the state of Missouri, and myself, lucky to have citizens such as Sergeant Kinel who are dedicated to the protection and future of our thriving community. I’m confident that Sergeant Kinel’s family, friends and community are proud of his accomplishments. God bless and again we are thankful for his service.”

Before the memorial, Saylor dedicated a flag that had flown over the country’s capitol building to Kinel’s family.

Representative for District 156 Brian Seitz was also unable to attend the event, but introduced another resolution to the Missouri House of Representatives in honor of Kinel, signed by Seitz and Rob Vescovo, Missouri Speaker of the House.

Around 50 people attended the memorial and showed their love to Kinel. According to the people who spoke at the event, Kinel was a beloved member of the Tri-Lakes community and left a lasting effect on many people.

“Ben left a mark at his passing, and he left a legacy,” Compassus Hospice and Volunteer Chaplain for Veterans and Military Coalition of the Ozarks Craig Buck said.

Dub White, president of VCMO, spoke at the memorial awarded Kinel with a lifetime achievement award.

“On behalf of the Veterans Coalition of the Ozarks, I give a lifetime achievement award for Ben.

“In grateful recognition of your years of local service, and for your devotion and hard work creating and maintaining Veterans Memorial Garden in Branson, Missouri, with the highest standards of excellence, which served as an inspiration to us all,” White said.

Branson Mayor Larry Milton said  while  he didn’t personally know Kinel, he was honored to have shared several similarities with him.

“I did not have the opportunity of meeting Ben Kinel, but I’ve heard nothing but great things about him and his heart and passion,” Milton said. “Ben and I have quite a few things in common, and I really wish I had the opportunity to meet him. We were both marines. We both served in the third marine division at Camp Pendleton, California.”

At the memorial service, Milton read a proclamation from the city of Branson declaring July 9, 2021 as Ben Kinel Day.

“From the office of the mayor, Branson, Missouri, whereas Ben Kinel started his United States Marine Corp service in 1951, assigned to the third marine division at Camp Pendleton, California, he achieved the rank of sergeant during the Korean Conflict. And whereas the devastating effects of war on veterans across the United States made such a lasting impact on Kinel, that he wanted to do something for veterans who weren’t as fortunate as himself,” Milton said, reading from the proclamation. “And whereas Kinel started the Veterans Memorial Garden and spent countless hours volunteering his own time to create, maintain and design a special place dedicated to all veterans. And whereas the corner lot known as Veterans Memorial Garden has become a great focal point and staple for residents, community members and tourists. And whereas the city of Branson would like to honor his life by recognizing his contribution and dedication to the city of Branson. Now therefore, I, Larry Milton, mayor of the city of Branson, do hereby proclaim this day of July 9, 2021, as Ben Kinel Day.

Kinel started the Veterans Memorial Garden with his friend Jack Herschend, founder of Herschend Family Entertainment, who spoke at the event.

Herschend quoted a book written about the Shepherd of the Hills, written over 100 years ago, which started off with saying ‘In this world, there are but few extraordinary people.’

“Fast forward a hundred plus years and Kinel was one of those extraordinary people. It was nothing but limestone ledges and weeds. Ben didn’t have any financial resources, he didn’t have any help, he just started doing it,” Herschend said. “Ben was a visionary, and obviously you can see that someone who can see this (garden) out of rocks and weeds is a visionary.

“He was a special man. He always had something positive to say about (his wife), about his life and his volunteers. In this decade, I believe we are going to see Branson recognized as the most patriotic community in this country. And I believe that when we look back at where it all started, it’ll be right here on these grounds.”

In May, Kinel met Jana Evans at a volunteer event, who he asked to take over as administrator of the garden. Kinel had been running the garden since 2008 when it started.

Evans, the current garden administrator, spoke of her short time knowing Kinel and how he shaped her life.

“Gardening has always been my passion. I came here to plant a few flowers, pull a few weeds, and (Kinel) just zeroed in on me. And you know what marines do when they do that, they won’t let you say no,” Evans said. “I know I have big shoes to fill and there will never be another Ben Kinel. But my goal is to attempt to follow in his footsteps and to continue the growth of this live masterpiece that he created.

“Ben had the dream, he had the vision, and he worked tirelessly until he could work no more. Yes, he left this rocky little hillside with blossoms of color for all of us to see, but his main dream was to honor his fellow veterans. That’s what it was all about for Ben. Heaven has gained an incredible patriot and a wonderful new gardener.”