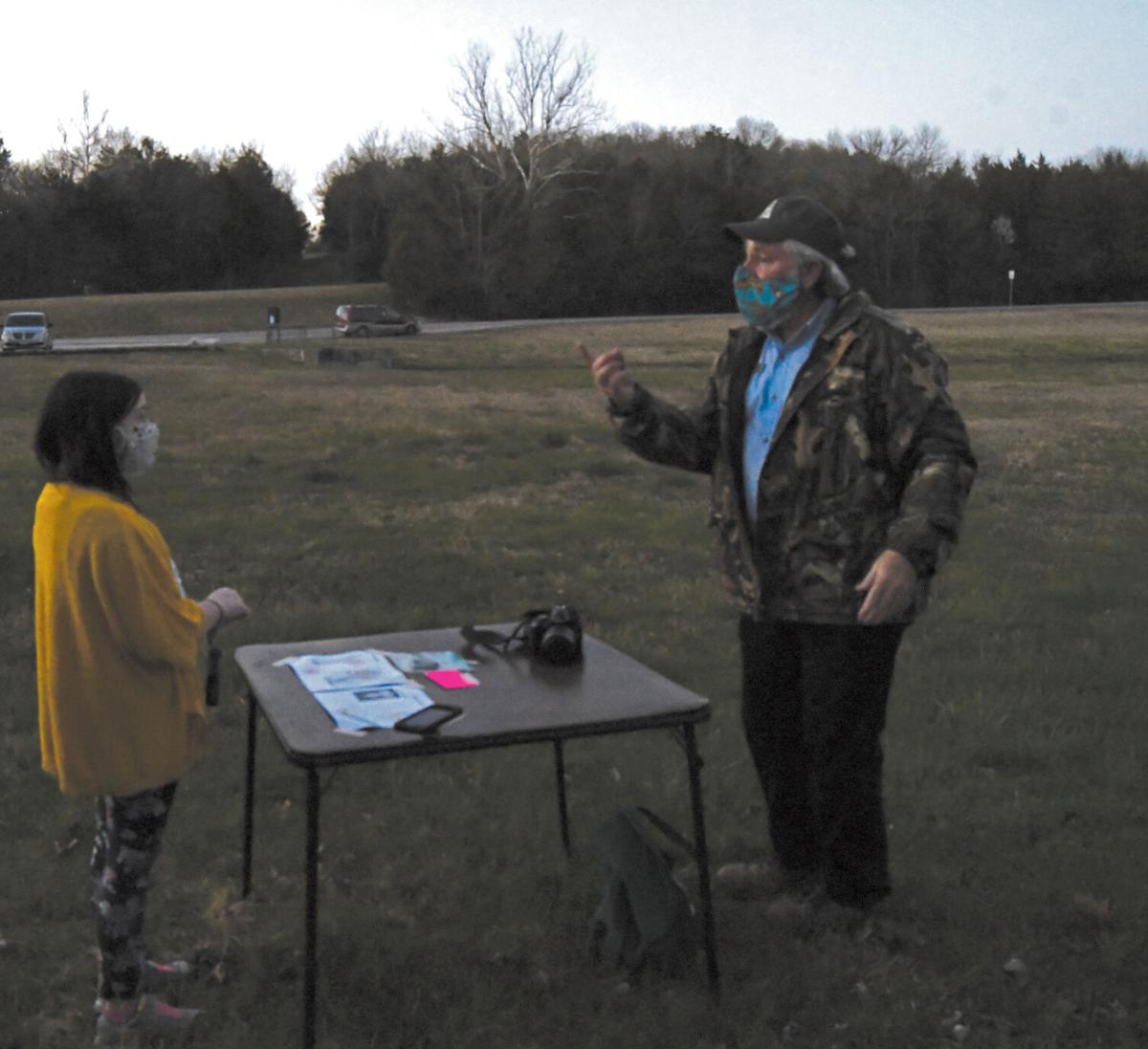 Instructor John Miller teaches Alexis Fahr, 9, of Branson about how owls have twice as many neck bones as humans, which allows them to turn their head 270 degrees. 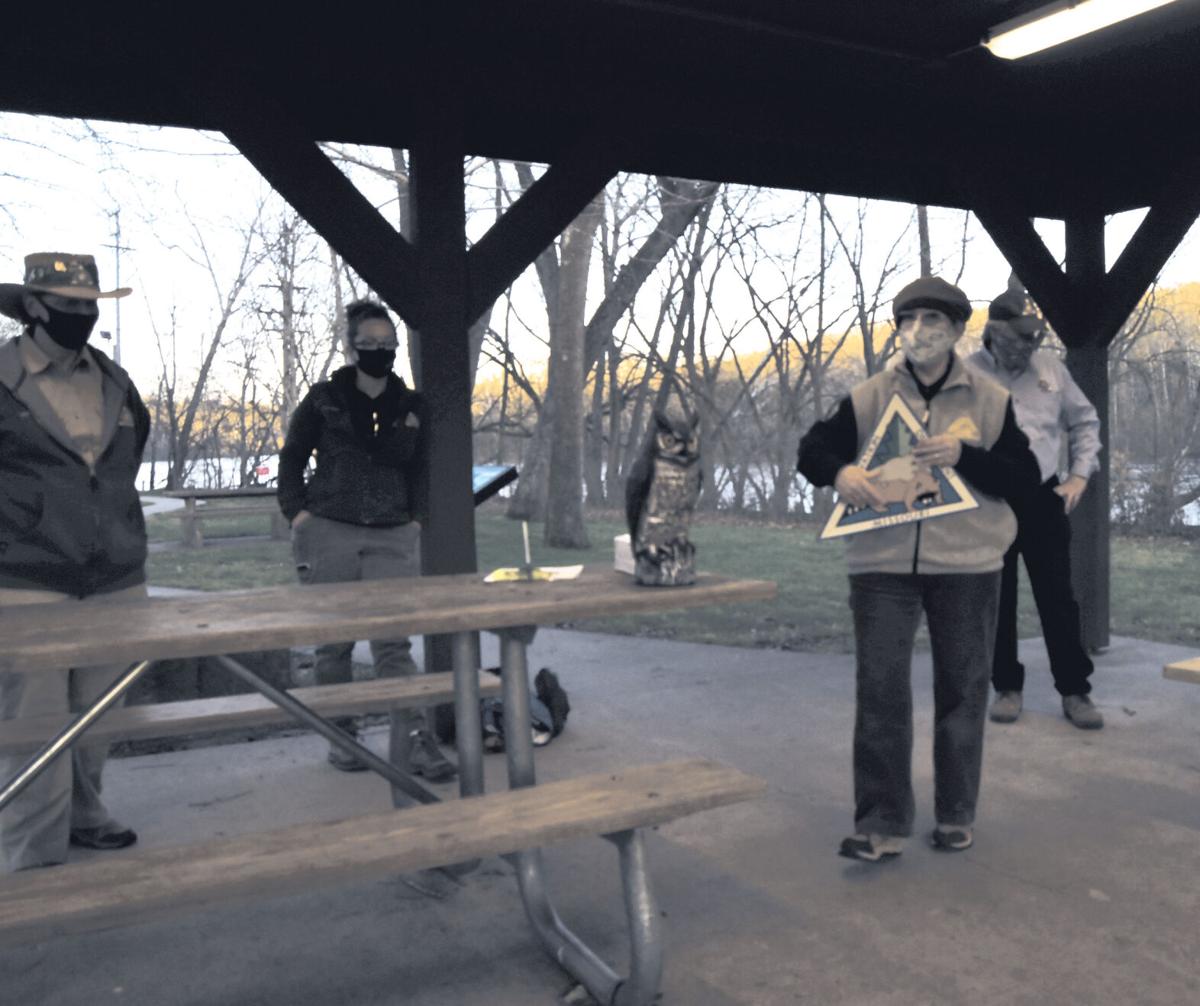 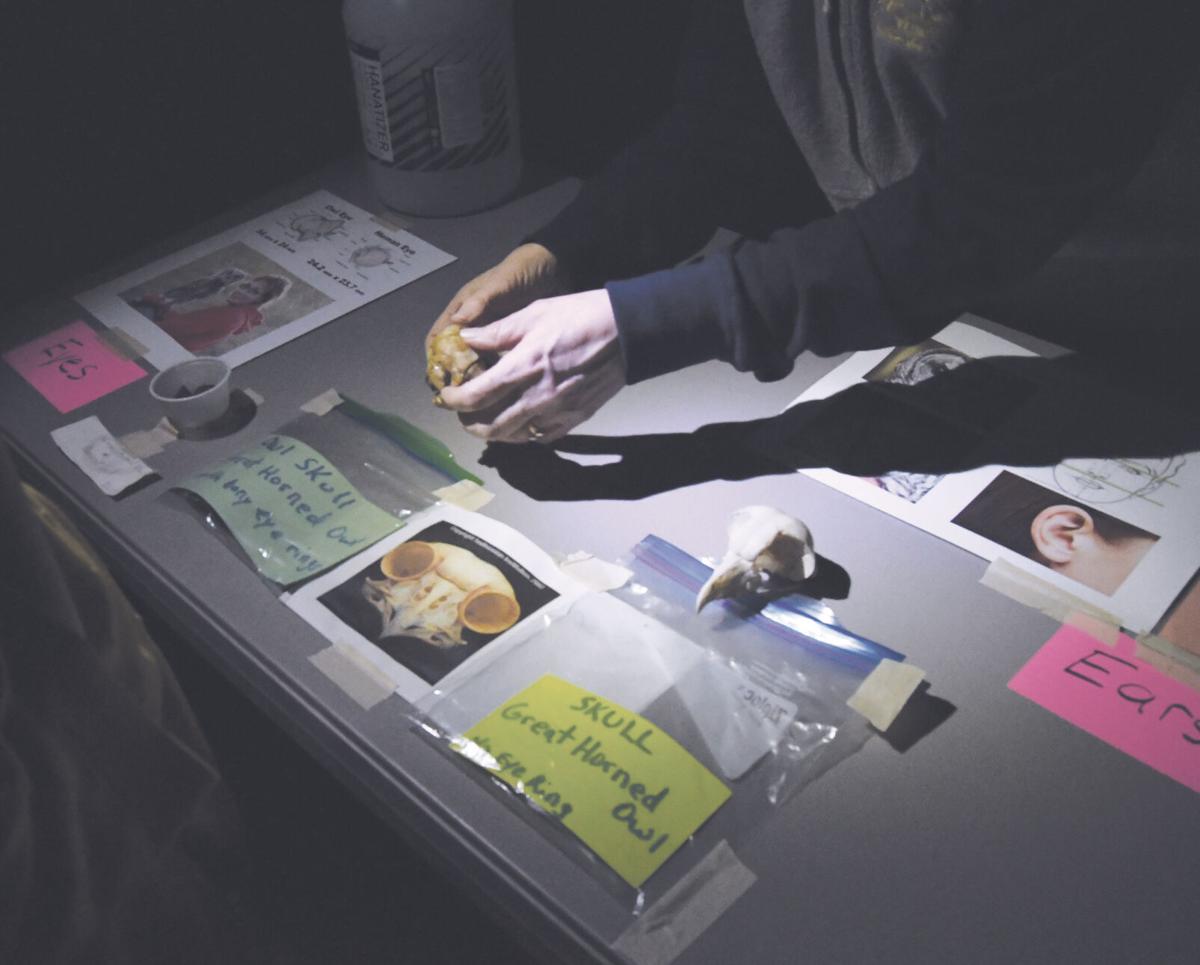 Instructor Kathy Miller teaches participants how owls can hear and see so well at night.

Instructor John Miller teaches Alexis Fahr, 9, of Branson about how owls have twice as many neck bones as humans, which allows them to turn their head 270 degrees.

Instructor Kathy Miller teaches participants how owls can hear and see so well at night.

Under the cover of darkness and beneath a starry sky, some lucky participants got to learn about the elusive owls that make Missouri their home.

On March 26, the Missouri Department of Conservation’s (MDC) Shepherd of the Hills Fish Hatchery and Conservation Center hosted, the Owl Prowl, its first in-person outdoor educational program since last year when the pandemic started.

“Last year we closed in March like everyone else,” said MDC Shepherd of the Hills Interpretive Center Manager Alison Bleich. “We were closed until September. Then we were allowed to open the hatchery back up, but with two raceways and outside only. We did that until December, then the state closed all conservation centers down again.”

According to Bleich, MDC was monitoring counties and cases of COVID-19 to determine when centers were allowed to open to the public for any type of tours, activities or in-person educational programs.

“We followed the positive COVID cases and were allowed to open back up again when our county reached and maintained a low enough number,” said Bleich. “The first week of February was when we were able to partially open up the hatchery to the public again and the Owl Prowl was our first registered in-person event since last year.”

The Owl Prowl was under the instruction of volunteers Kathy and John Miller with the help of MDC staff member Ashlee Huerta, Naturalist Leah Eden, and Bleich.

Members of the public were allowed to register and attend the Owl Prowl from the MDC website. The event was limited in space to COVID-19 and social distance requirements, according to Bleich.

Participants were able to learn about the owls that call Missouri home while on a night hike on the property at the foot of the Table Rock Dam.

“There are eight different species of owls that live in Missouri,” said John. “The most common for people to see in trees during the day or hear at night are the Barred Owl and the Great Horned Owl.”

John explained that it is very common for owls to live in close proximity to humans. It is normal for people to see owls sleeping in trees during the day at parks and in busy public areas.

“It is truly amazing because they share our habitat ,but they are doing it at night time when there aren’t as many people around,” said John. “Those types of areas are perfect hunting areas for owls. In parks a lot of the time at night, rodents will come out to feed on seeds and things that are out there.”

Kathy and John had stations set up to teach participants how owls are uniquely adapted to a nocturnal life. Participants were taught how the owl’s neck bones, feathers, talons, eyes and ears help them see, hear and fly silently to aid in night hunting.

According to Kathy, people can learn how to call barred owls toward their yards and property by imitating the owls sounds.

“Owls are curious and when you call them, they like to see what is going on,”said Kathy. “They probably look at us like who are these giants trying to speak our language.”

John then instructed the group on how

one could learn to call a barred owl to them.

“It’s kind of funny, but if you say ‘who cooks for you, who cooks for you all’ you can call an owl,” said John. “You just have to replace the words with whoo sounds, but in that rhythm.”

The participants were then escorted in a short night hike calling to owls hoping to hear a response.

“Sometimes, you get an owl that comes really close and calls back and sometimes you don’t,” said John.

During the Owl Prowl event, a few members of the group did hear an owl off in the distance, but it didn’t come close enough for them to see it.

“I heard an owl whoo back to me a couple times,” said Alexis Fahr, 9, of Branson. “It was so cool. Now I just want to go out every night to see if I can call them to my house.”

According to Bleich, the MDC Shepherd of the Hills Conservation Center could potentially host more in-person events this year and will continue their virtual programs.

“Nothing is planned right now because we are so busy with hatchery visitors,” said Bleicher. “We could do something in-person in April. We get really busy here, just like everywhere else in Branson, come May through August and with staffing we generally stick to the trout during the summertime. We will be doing some virtual again. We have been doing virtual events during this time. We don’t do a ton compared to some of the other centers, but we have been doing them on a regular basis. And those are not going away. Even if we do in-person programs we will still be doing the virtual ones.”

According to Bleich, the public can look at the website for upcoming events.

“Whenever we do an event we do put it on our website first,” said Bleich. “You can even sign up for email and text alerts for upcoming events, including the virtual events on the website.”

For more information on the hatchery ond upcoming events go to nature.mdc.mo.gov/discover-nature/places/shepherd-hills-fish-hatchery.