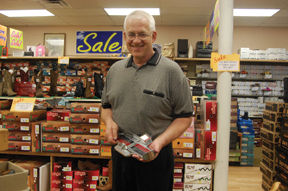 Reish Shoes and Boots owner Joe Reish holds a Brannock device that is used to measure feet. Reish is retiring, so the downtown store, which originally opened in 1934, is closing for good. 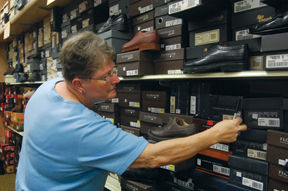 Barbra Reish puts the final price tags on the shoe inventory in preparation for the closing out sale Wednesday evening.

Reish Shoes and Boots owner Joe Reish holds a Brannock device that is used to measure feet. Reish is retiring, so the downtown store, which originally opened in 1934, is closing for good.

Barbra Reish puts the final price tags on the shoe inventory in preparation for the closing out sale Wednesday evening.

The longest family-owned business in Branson, Reish Shoes and Boots, is closing its doors.

Owner Joe Reish decided it was time to retire after operating the store for more than 30 years.

“I have accomplished being Branson and Taney County’s oldest merchant, and while that’s worth something, I’ll let someone else have the reins for awhile,” Reish said.

“I do want to thank all my loyal customers for their business and support.”

Reish said he will miss helping people find the right pair of shoes the most.

“Just the joy of finding somebody something that they need and want,” Reish said.

“The joy I get from fitting feet and helping some poor soul (who would otherwise have had) ankle, hip, knee, back trouble from wearing ill-fitting shoes. (It) can be fixed if you have support shoes adequate for what you’re doing.”

The family business originally opened in 1934 when Reish’s father owned it as a cobbler store.

“Very quickly he added new shoes to the rebuilts that were the market in those days.”

“I was fitting feet before I could spell pedorthist. I took the Brannock device to second-grade show and tell and measured feet with it. They were new in 1958.”

Reish took over his father’s store in the 1970s.

“It seemed like a good business and it was kind of his wish that it continue.”

Reish said the shoe store has provided steady income for him and his wife.

“It’s been a good life. I’ve had six decades of employement out of this place. There’s not many business that could provide that.”

Reish has lots of fond memories growing up around the store. He remembered when Pacific Street was repaved back in the 1950s.

“The early 50s, I was probably three, and out with the men handling the hot asphalt and steamrollers ... at 3 years old I thought I could just jump in and help. Mom was not too thrilled, but I enjoyed it.”

He said a racoon got loose in the store once. According to Reish, a couple of tourists had their pet racoon with them and wanted to bring it on the train, but was not allowed on it without a collar.

“They came to dad as the town cobbler who made saddles and tack and all this stuff, and asked for a collar for their racoon ... Dad was measuring him when a car went by outdoors and the car backfired, which sounds like a gun shot, which panicked the coon. At that point the coon escaped and all hands set about chasing the coon.”

“And from that time on, at least in the Reish family, ‘crazier than a pet coon’ has been a saying.”

Reish already has plans in the works for his retirement.

“I look forward to travel and educational opportunities. Someday I’d like to finish that paper on econ that I’d started back in business school some years ago.”

Reish Shoes and Boots is having an ongoing closing sale where everything from inventory to the decor will be up for purchase.

“It’s going to the walls and the fixtures and if anybody is interested in the building, by all means talk to me.”

Customers will have the opportunity to enter free drawings to win prizes such as a flat screen TV, a tablet, a Keurig, a Kindle, an XBOX and many other prizes throughout the closing sale. Reish hopes to be closed by the first of next year.

Reish Shoes and Boots is at 120 South Commercial Street in Branson.

The Reish family business will be missed by community members.

Bohinc has known the Reish Family for 20 years.

Bohinc is happy that Joe and his family will be able to enjoy all the little things there is to do after working hard for so many years.

“There comes a point when you’re a grandparent to make more time with your family,” Bohinc said.

Bohinc said the Reish family has given a lot time to the community and will probably find ways to stay active after retirement. Over the years, Bohinc has bought shoes from Reish’s and will miss greeting him downtown.

“I’ll never lose him as a friend.”

Thank you for the memories I was born here in branson and can remember going to the store for shoes. I is with part sadness but part happiness for the family that they are leaving . I wish the best for them and hope they enjoy the time they will have.